This past weekend, I attended the ALDHA-West (American Long Distance Hiking Association West) yearly Gathering that takes place the last weekend of every September. I found myself torn in how much I wanted to document and share. I’ve been taking a break from the whole photos and blogging to recharge and did a very poor job of pictorial documentation. Now that it’s over, I kick myself for not being more detailed, of course! It was a wonderful weekend that I’d like to share, so here are some of the photos I did take when inspiration hit and somewhat incomplete summary of this great experience.

Last year, I attended the Gathering and received my Triple Crown Award. Many have the impression that the Gathering is only for Triple Crowners, but it really isn’t like that. The Triple Crown Ceremony is just one part of a much bigger gathering of a community of hikers. The bond among thru hikers is unique and I like that you don’t have to know someone personally to just strike up a conversation at the Gathering. Here are just a few of the people I managed to take a photo of…and know that this doesn’t even scratch the surface of who all was there and the depth of this batch of attendees.

I did not arrive at the Gathering until Saturday morning and I brought a surprise attendee with me! Thanks to the incomparable ALDHA-W President, Whitney(Allgood) and the generosity of Gossamer Gear (we are all Ambassadors for Gossamer Gear), we were able to get Anish to Portland just 24hrs after she broke the overall self supported speed record on the Appalachian Trail! It was a fun covert operation and secret to keep. Anish stayed with me Friday night in Portland and was reunited with the hiker community she knows so well just 36hrs after having completed her second record breaking hike (she also holds the self supported PCT record as well!).

While at the Gathering, I was also reunited with Ratatouille (didn’t get a photo, argh!), the host of the great podcast Trailside Radio. Ratatouille hiked along the PCT this year and told the stories of those he met. If you missed it, last spring, I was interviewed on his second episode, “Talking With Wired”. He does an excellent job and I’ve dubbed him the Barbara Walters of thru hiking, ha! He was able to get the first interview with Anish as his 19th Episode and it is not to be missed! Don’t listen in the car on the way to work if you don’t want to be puffy from crying when you walk in like I did…
Trailside Radio: “ANISH”

Your browser does not support the audio element.

The Gathering is also a reunion of sorts. For those that have followed the blog in the past, Drop-N-Roll (who I met on the PCT and started the CDT with) and Why Not (who I hiked the Tahoe Rim Trail with this summmer) were there too. Great to catch up! Drop-N-Roll went to Iceland this summer and Why Not went on to Alaska after our TRT hike and is leaving soon to do the Te Araroa in New Zealand!

My picture here with Drop-N-Roll is with Nita, who is an amazing trail angel on the CDT in New Mexico. She opens her home, known as the Toaster House, to any and all bikers and hikers that come through Pie Town, NM. Nita was awarded the Martin D. Papendick award for Outstanding trail angel of the year. Hikers chipped in to fly Nita and her daughter to Portland and it was wonderful to see her be honored among so many of the hikers that had stayed at the Toaster House. Here’s the link to my Toaster House experience on the CDT.

The Gathering weekend is full of events and presentations. This year’s presentations were top notch! It was great to see Trauma and Pepper present on their historic first ever winter traverse of the PCT this past winter. These two guys are the epitome of teamwork and have hiked thousands of miles together. It was a highlight of the weekend to see the camaraderie and humor between these two guys as they recalled their hike and answered entertaining questions, such as, “Who was the big spoon while spooning at night?” Gotta love hikers!

Another great presentation that was the talk of the weekend was Jean Ella’s presentation of her 1978 CDT hike when she became the first woman to thru hike the CDT…I was born that year! I am sooo bummed I missed the presentation, but I did get to meet Jean and found out she’s a fan of the blog! Whoa! I was totally pumped to meet her! Jean was kind enough to give me the presentation on a disk that included a great video of her photos and her voiceover recalling the hike. Many of this weekend’s presentations were recorded and ALDHA-W may be posting them on their site in the near future…if that happens, I’ll be sure to update this post with links.

Here is Jean’s presentation from the Gathering!

This year’s Gathering was the 20th anniversary of the Gathering. Three of the first five Triple Crowners from the first year were at the Gathering. One of them is Brice Hammack who introduced himself to me a couple years ago at one of Portland’s many hiker events. It’s been great to see Brice at various events over the last couple years and have a camaraderie with him as a fellow Triple Crowner. I just had to get a photo with him this weekend cause he’s one I always like to see at these events.

I saved the best for last…Teresa Martinez, the Director of the Continental Divide Trail Coalition was there too. She is a force to be reckoned with and took over the reins of preserving and protecting the CDT a few years ago when it was close to full demise. I have an infinite amount of respect and admiration for Teresa. What she has done for the CDT in just a few years is nothing short of AMAZING! 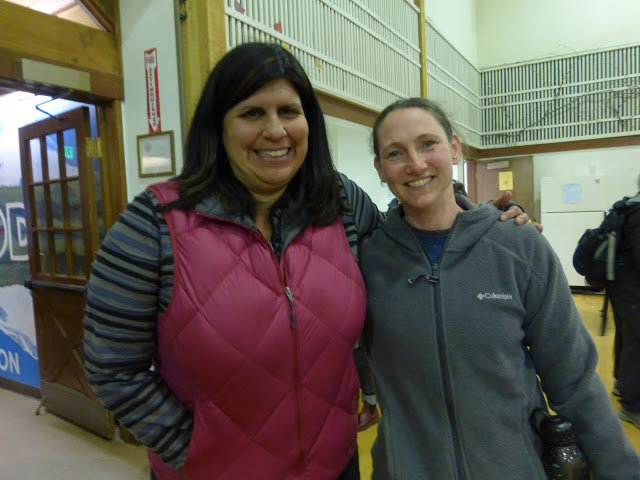 The CDT is a big trail with very few resources, and it is often overshadowed by it’s coastal siblings, the AT and PCT. Those of you that have missed out on their most recent campaign, they are in the running to win a $25,000 grant determined by public vote. It is a tight race and the CDT is in the top three with the top two each winning the grant. PLEASE HELP by voting online for the CDT!!! You can vote once a day until October 31st and it’s a very tight race. All it takes is less than a minute of your time. I am sending out an email each day to those that wish to be on the reminder list, so email me (erinsaver@ixr.0db.myftpupload.com) with your email if you’d like to be added to the daily reminder email.

Ok, so that turned out to be a much longer summary than I anticipated, but know that it is just a fraction of what went on over this weekend. The 2016 ALDHA-West Gathering will be in Nevada City, CA the last weekend of September next year. This is an exciting time to be part of the thru hiking community where history is being made and celebrated. I hope my review here shows how much this event welcomes and inspires all who attend and that it encourages you to consider attending as well.