Well, it still doesn’t seem real yet, but tomorrow I fly to Australia!!! If all goes as hoped, I won’t be back in the US until late spring. It’s pretty exciting to think about such and extended amount of time spent traveling and hiking, and what the next 7 months could bring….SEVEN MONTHS! I still can’t wrap my brain around that! I know this summer’s high routes were a change for the journal, so thanks for sticking through all that. We are now going to be back to actual trails and I’m excited to write about something other than which rocky pass I climbed for hours multiple times a post. Believe me, I know that was repetitive, but I write what happens and that’s what filled my days this summer. Don’t get me wrong, I enjoyed those routes and am quite proud of doing such challenging terrain, but I don’t like writing “trip report” types of posts. I like the experiences and stories that happen along long trails and bringing those to all of you.

It’s been a blur of back-to-back hikes this summer, and it was nice to get time away from blogging this past week. After the Wonderland Trail, I had a few days at home in Portland to get things organized for the upcoming international hikes, and then I took my annual trip to the Chicago area to visit my twin sister, three nephews, and many immediate and extended family members. It was great to spend time with everyone knowing how long I’ll be gone. Those that have followed the blog from the beginning know that my twin had her first son on my first hike, the Pacific Crest Trail. Her second son was born while I was on the Continental Divide Trail. Then last year, I planned the Great Divide Trail to be completed just in time for me to make it for the birth of nephew #3. Looking at them, it’s just crazy how quickly time passes. Here they are in their birthday shirts. All born in August, and I get to make it for the big birthday party each year Labor Day weekend. #3 is just walking…time to get them on the trails! 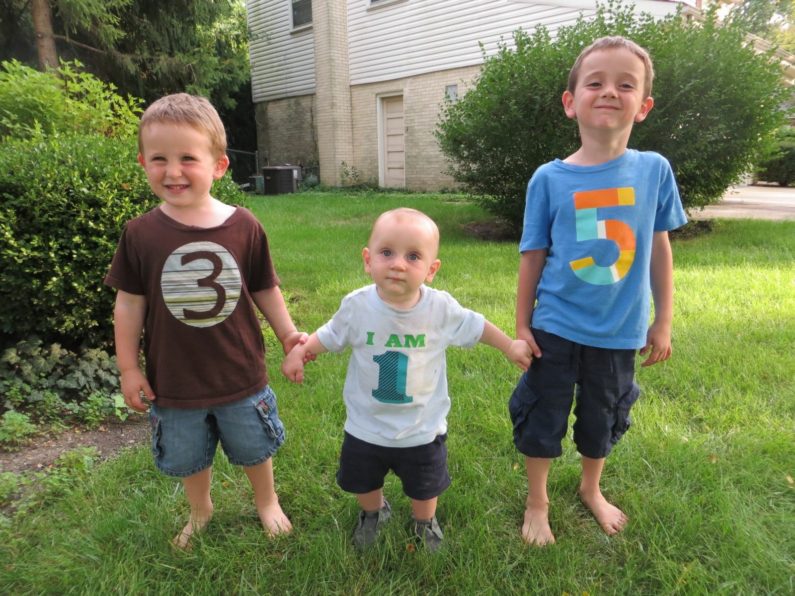 My nephews in their birthday shirts. So freakin’ cute!

I’m currently writing this on my late night flight back to Portland, where I’ll have a day and a half to tie up all the loose ends and get final preparations together. All the major things like visas, flights, general hike itinerary, guidebooks, and maps are done. I just need to tighten up some things on the blog, TRIPLE CHECK THAT I HAVE ALL MY GEAR, and load up podcasts, audiobooks, and shows I am quite excited to delve into. With the routes I did this summer, they required much more attention and focus, so I didn’t find myself ever in the mood for anything other than music I could zone out with. In fact, with my working 60-70hr wks much of this past year, I didn’t listen to much at all and often found myself needing silent recharging time. I think I’ll surely start out that way in Australia as I still feel a great need to recharge and just walk mindlessly on my own for awhile.

Speaking of going on my own, I’ll be doing all these hikes in Australia and New Zealand solo. There will be plenty of other hikers out there, with traffic similar to the popular US trails. So, no worries, I won’t be totally alone. Just alone enough to be free to do my own routine and schedule. The past two years, I’ve teamed up with people for those more challenging and remote hikes, and that requires compromises by all in their natural routine. I’m greatly craving some extended solo hiking and seriously can’t express how excited I am to do my own thing. I know it seems simple, but it’s pretty amazing to be completely independent and do everything based solely on my own gut feeling. I’ve missed that feeling of being in my own natural groove and greatly look forward to returning to that space.

What will I be doing in Australia? 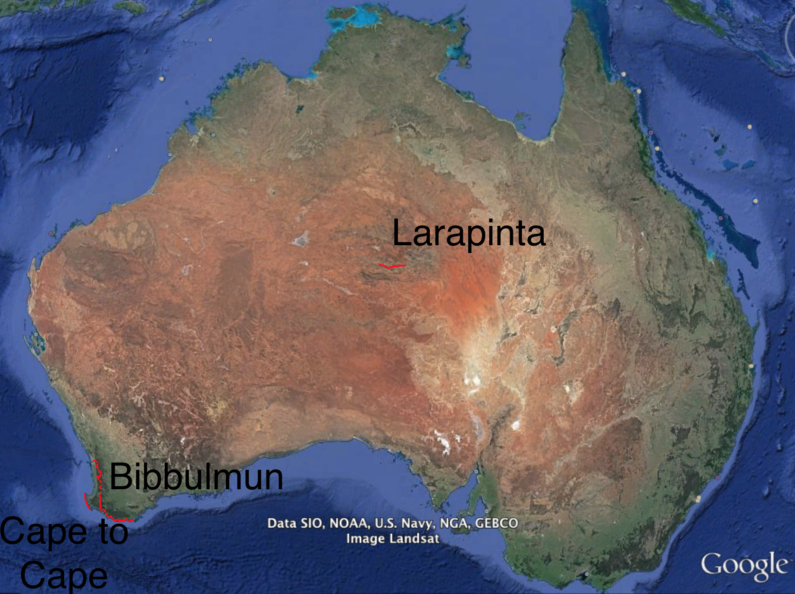 An overview of my planned Australia hikes.

I have three main hikes planned for Australia. First, I will fly into Alice Springs, in remote central Australia for the first hike. Before that hike, I’ve signed up for my first ever overnight tour bus experience that will take me to Uluru-Kata Tjuta National Park and Kings Canyon. Two of the more remote, yet highly recommended spots to visit in Australia. From Kings Canyon, I will somehow find transportation to the start of the Larapinta Trail (139mi) that will take about a week and I’ll hike right back to Alice Springs. As a comparison, the Larapinta is more like a tame version of the Hayduke hike I did in Southwestern US last summer. Although a remote and a shorter trail, it’s garnered quite a bit of acclaim for it’s unique scenery and beautiful landscapes.

After the Larapinta, I’ll fly to Perth on the west coast of Australia to do the Bibbulmun Track (623mi) for a month where wildflowers should be in full bloom. This is Australia’s most known long hike. I’m not expecting anything that will knock my socks off, but I am looking forward to just walking and recharging on a trail that will be fairly mindless in comparison to what I’ve been doing and where I will be headed. It will be a great break!  From the Bibbulmun, I’ll do another hike along the west coast call the Cape-to-Cape Track(84mi). It should take a handful of days to do and will be a beautiful ocean coast hike!

That is how I’ll spend my 1.5 months in Australia. Yes, there are tons else to do in that massive country, but the main goal on this trip is to do the TeAraroa for 4-5 months in New Zealand, and I just wanted to do some trails in Australia while I was over there. I may find a way to hit Sydney (on the east coast) for a day since I’ve never been. I’m really hoping to return to Australia to hike in Tasmania (island on the south coast) after the TeAraroa if the timing of the seasons works out. Fingers crossed on that one as Tasmania is beautiful and dreamy!

Finally, in November I’ll be starting the TeAraroa in New Zealand. I’ll give more details on this as the time approaches, but it’s sure to be quite a trip. I will be hiking the 1200mi TA southbound the full length of both islands of New Zealand. The trail doesn’t always hit all the highlights of NZ, so I will also be jumping off to hit some side trips along the way if timing and weather cooperates. I’m probably most excited on this one that it’s an open ended timeframe. Most hikes I’ve done have required some kind of timeframe due to other things I’m doing or an impending fall/winter season. I should have plenty of time to fully explore New Zealand on an unplanned schedule and not feel rushed.

So that’s the update for now. There are tons more details I could write on the planning, logistics, and details of the trip, but I know they will come to the forefront naturally as things occur, so I’ll address all them as they happen. The next post will be sent from AUSTRALIA BABY!!!