We woke up early to get the 8am bus to Cradle Mountain-Lake St Clair Visitor Center. It was a 3.5hr ride on a small van-like bus with about a dozen others. I caved and took a pill for motion sickness hoping it would work. It seems like it did, but I think it made me drowsy, which I don’t like, and I slept a lot of the way. I guess I’ll take drowsy over car sick! The bus dropped us off at the park’s visitor center, where we picked up our permits. Then there was another ~20min shuttle to the Ronny Creek car park, and the start of the 48mi/78km Overland Track. We had lunch before we started, and set off about 1pm. 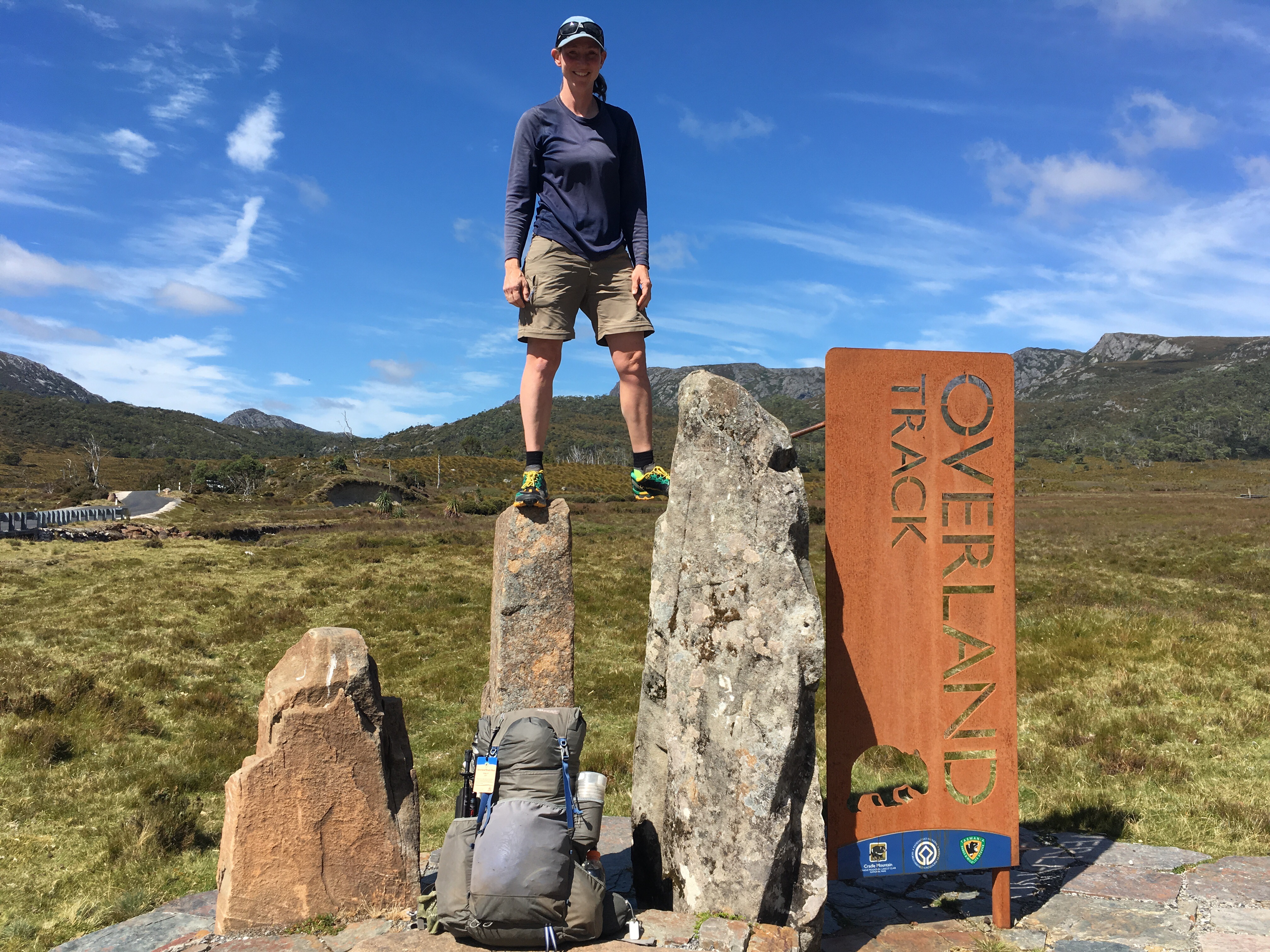 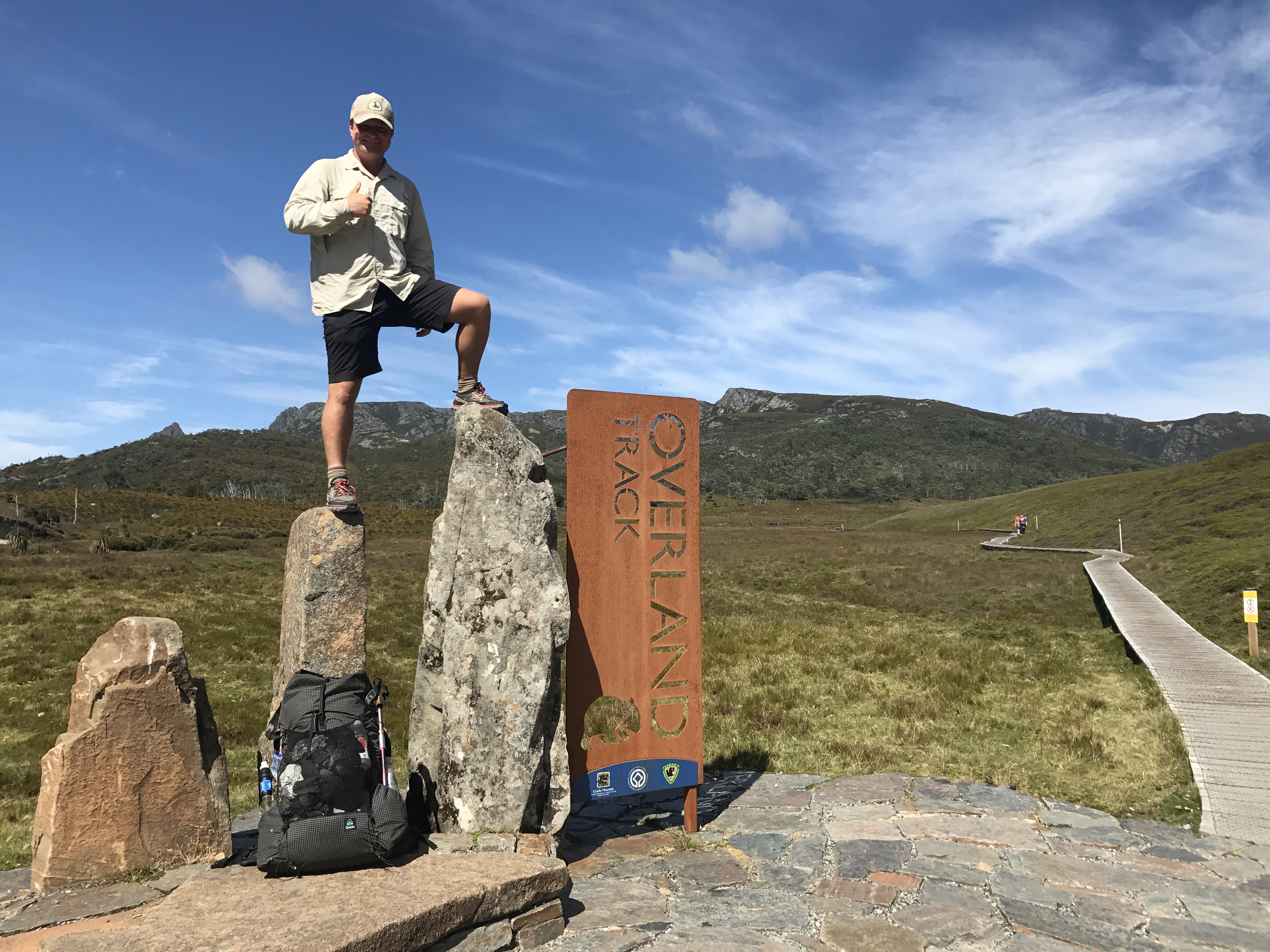 Of course, it wouldn’t be a proper trip without me forgetting something important. This time it was my gaiters. I had new ones in my bounce box I meant to grab, and I totally forgot, so I don’t have any gaiters. Of course, out here in Tasmania, mud and leeches are a major thing. Yes, I said leeches! I’m not excited about this aspect of the trip. Apparently, they are minor ones that come off fairly easily. There are tons of suggestions online for removing them like prying them off, burning them, using salt, or just letting them fall off on their own after ~20mins. We’ll see how it goes. The Overland Track is pretty dry at the moment, so I’ll be ok without the gaiters for this week. I had a couple chances to buy some today, but they weren’t the right thing, so I passed. We have decided not to use the full length gaiters in Tasmania, which many fear monger about. We’ve had our share of mud the last few months and think we can tolerate it with the ankle gaiters. It’s the leeches that freak me out though. We’ll see. 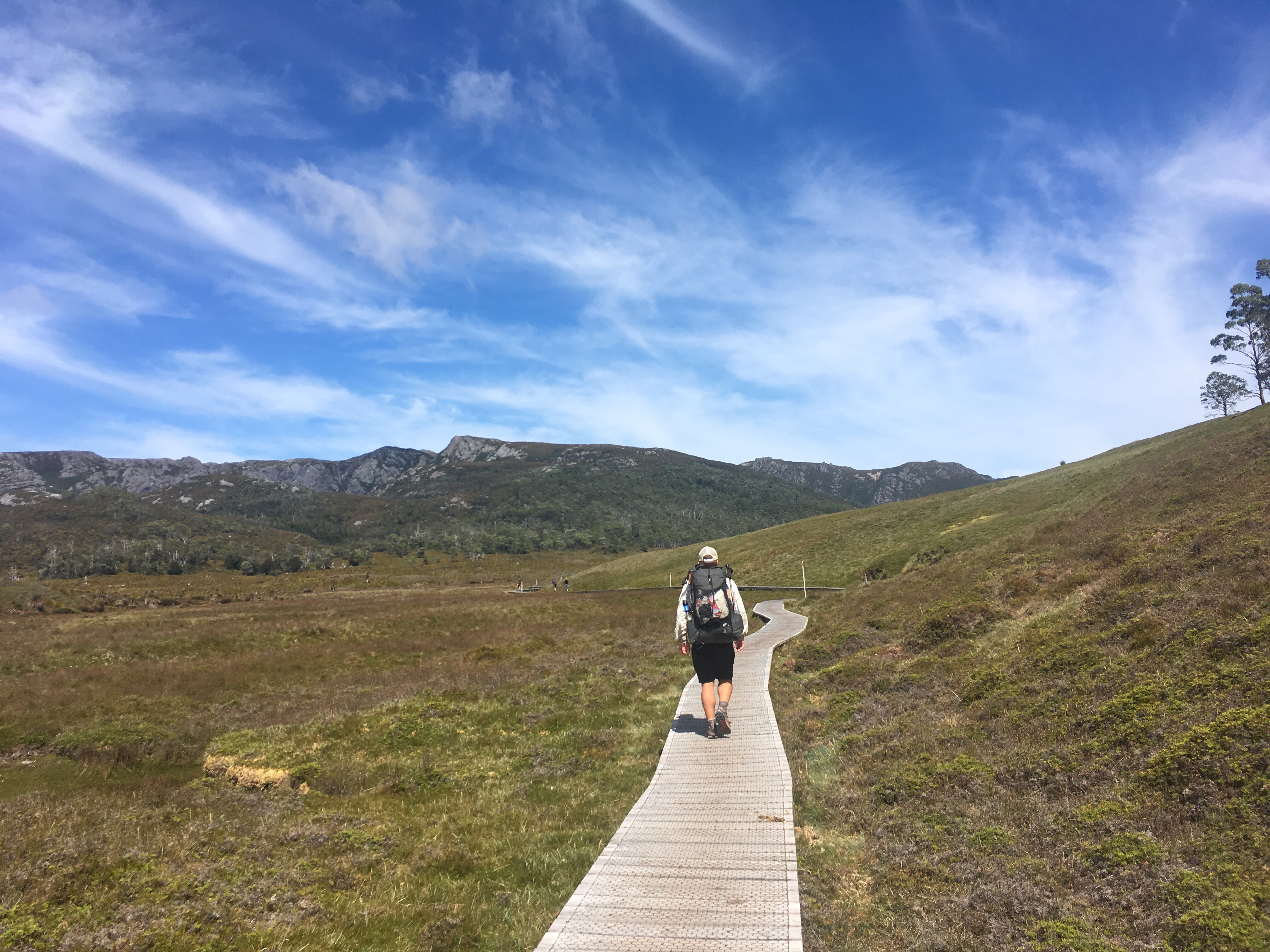 We really enjoyed today, and it’s great to be back in Australia. I find it to be so much more relaxing in Australia overall. Some of the hiking we will do will be more challenging while we are here, but it was really relaxing to be able to walk without obstacles and take in the expansive space. The Overland Track is relatively short, and we could complete it in a few days on its own, but it’s the side trips that really make it complete. We have many side trips we hope to hit along the way, so we have a week of food, and are going to play it by ear as we hike to see what weather and timing allows. Today, we did 13km on the OLT and 4km in side trips. 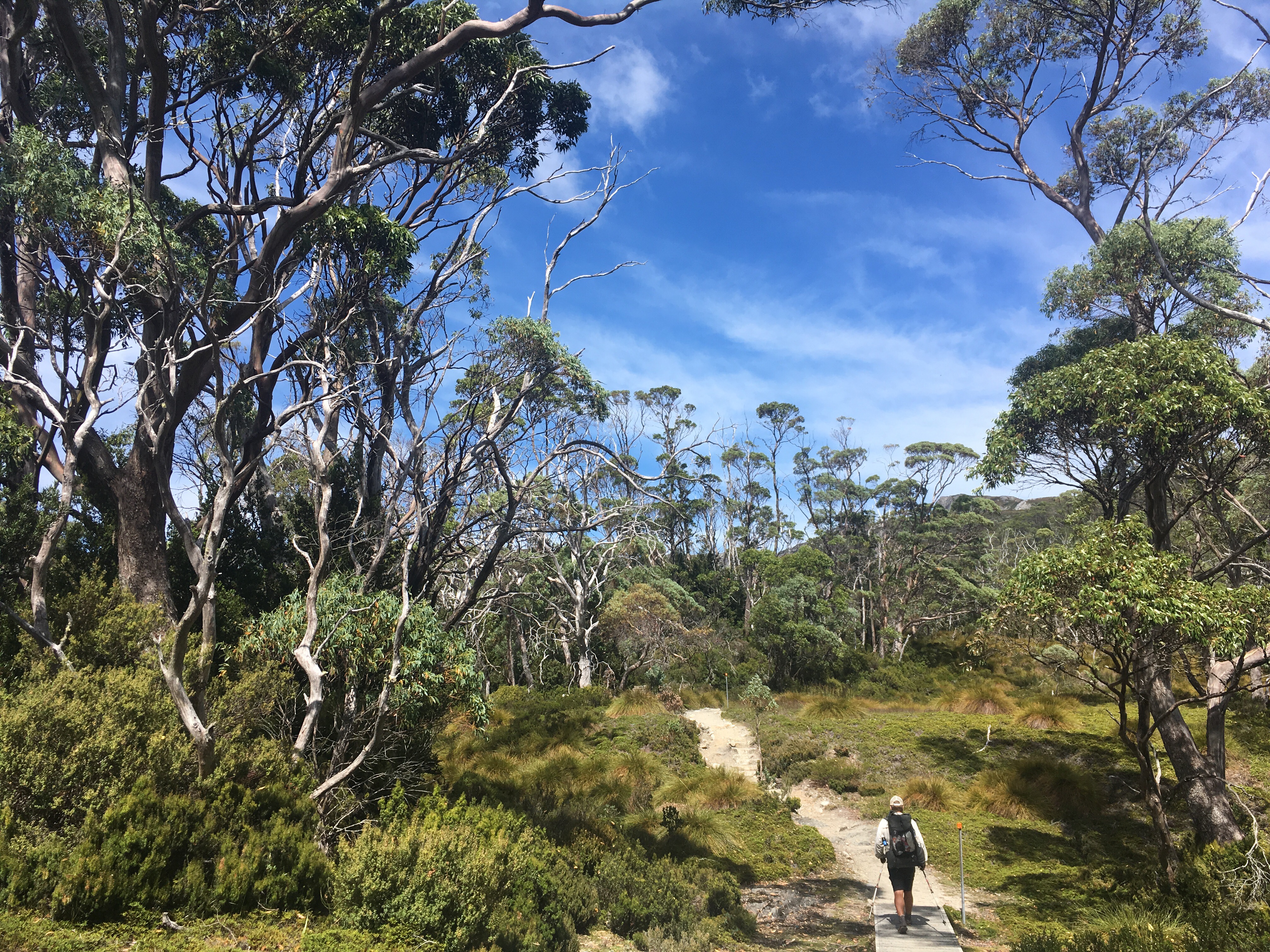 There was boardwalk walking the majority of the day, which is great when the other option would probably be feet sucking mud. It’s nice to have knowing what the alternative is like, and we’ve heard there’s still plenty of mud ahead, so we were thankful that this first day ended with dry feet at least. We hiked up to the popular day hike to Marions Lookout overlooking Dove Lake. There was no lack of people, that’s for sure. 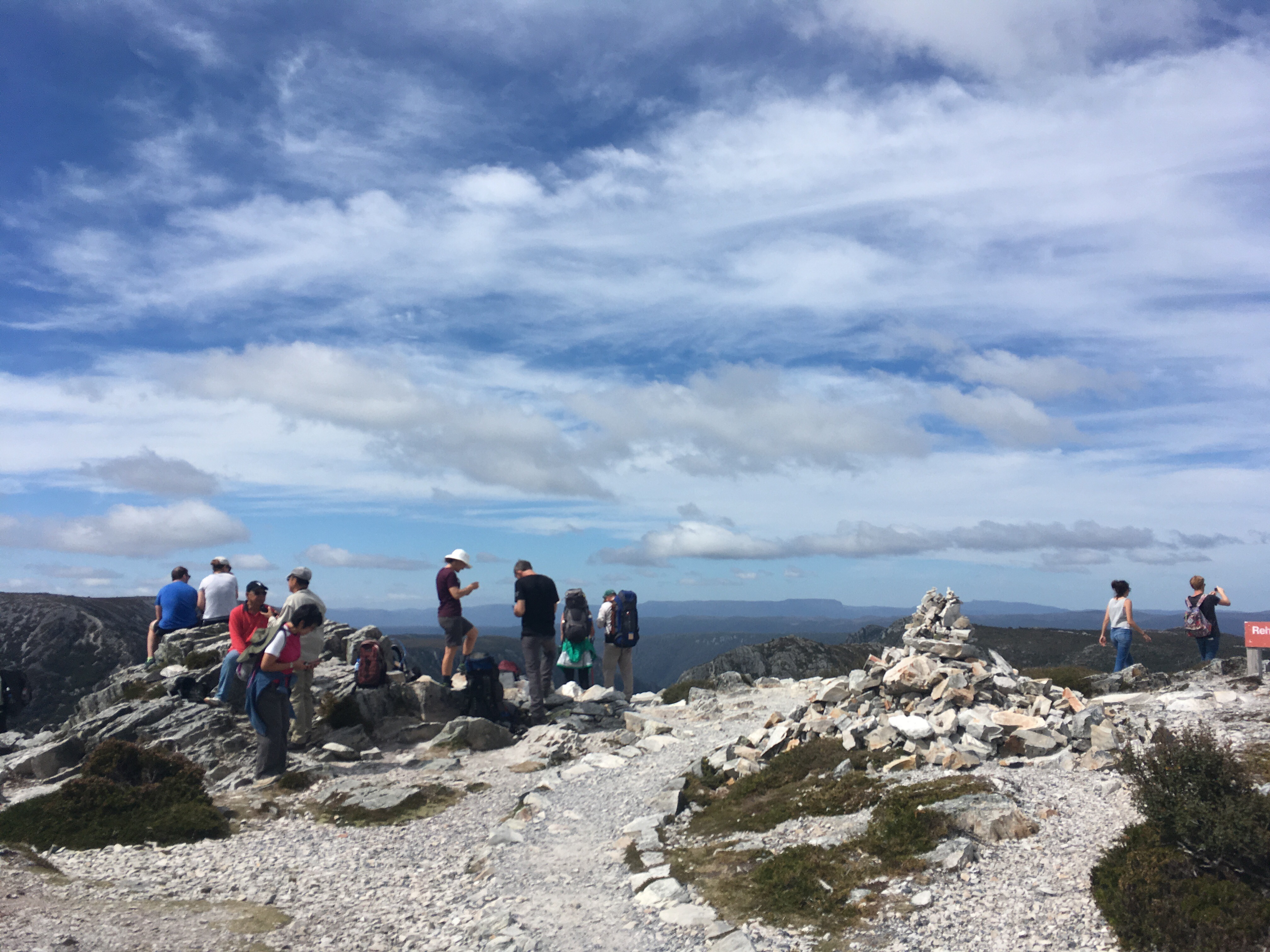 Then the track goes by Cradle Mtn, which is one of the more popular side trips. It took us 1.5hrs round trip with tons of time for photo taking, and it was well worth it. It is deceiving as it seemed like it was going to be quicker, but there was a lot of rock scrambling the second half of the way up. 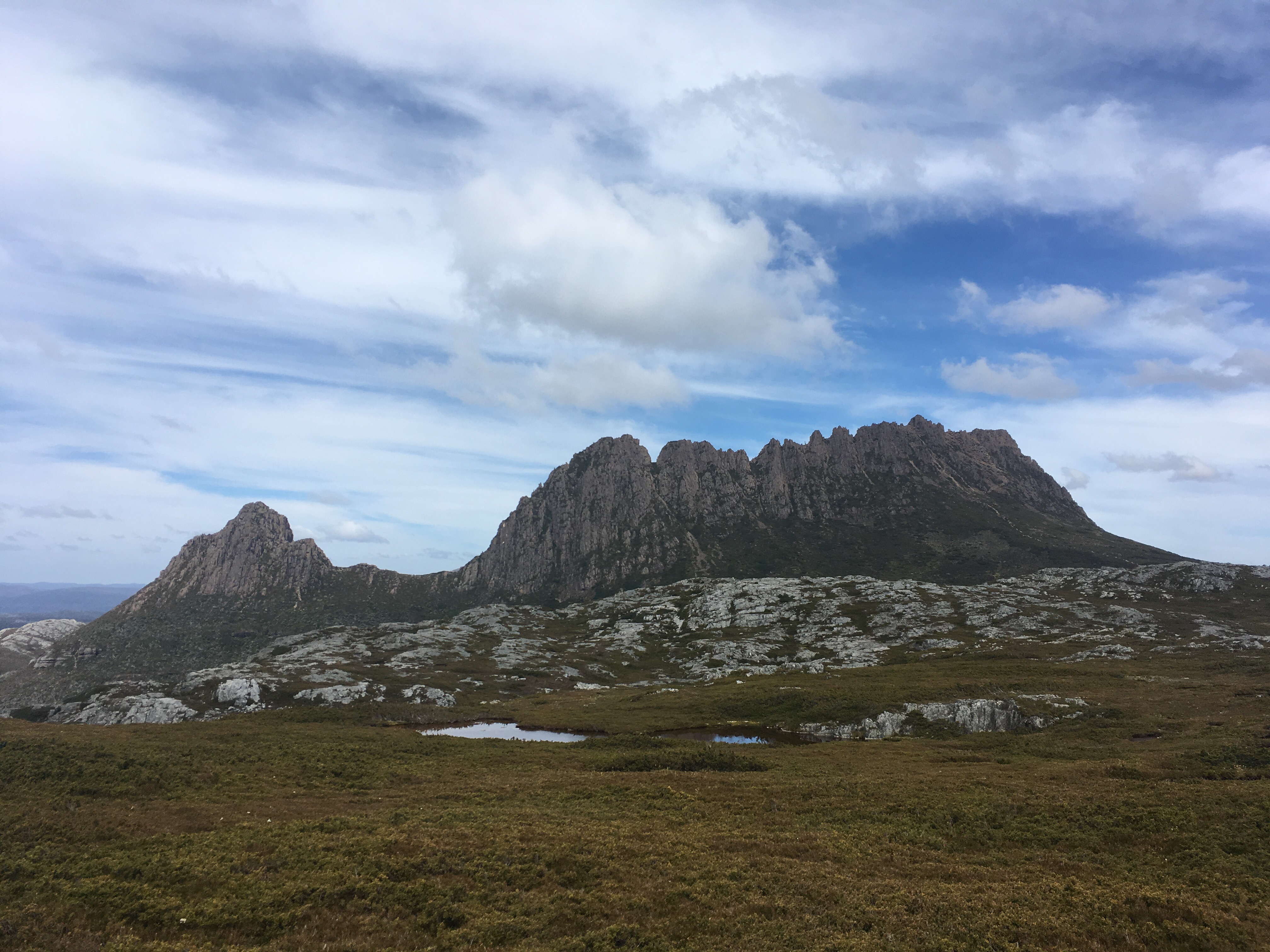 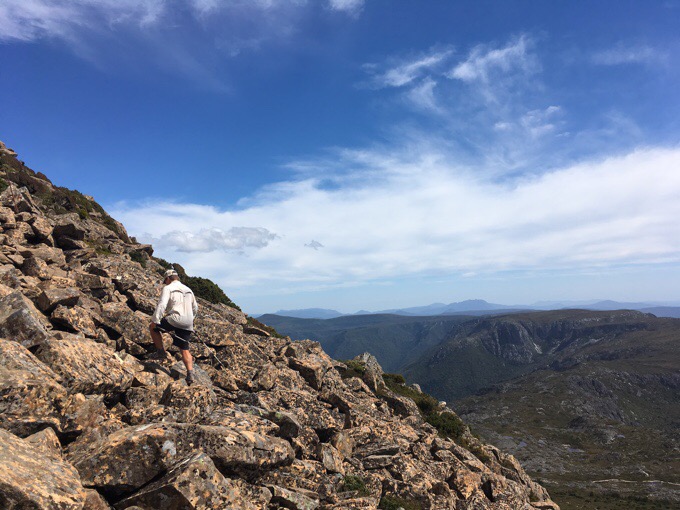 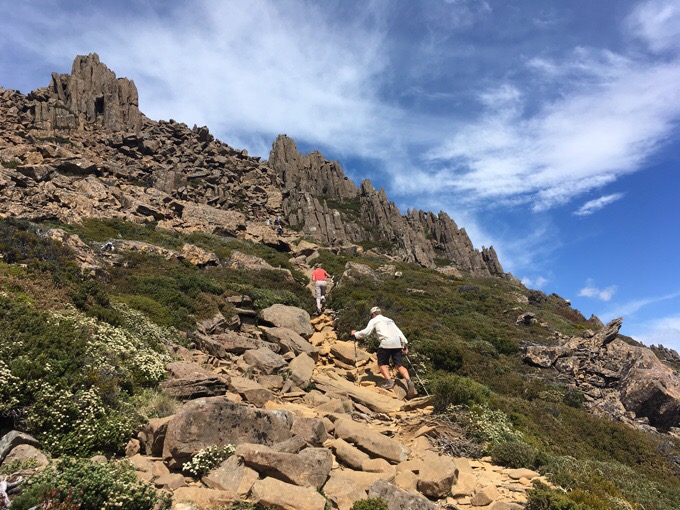 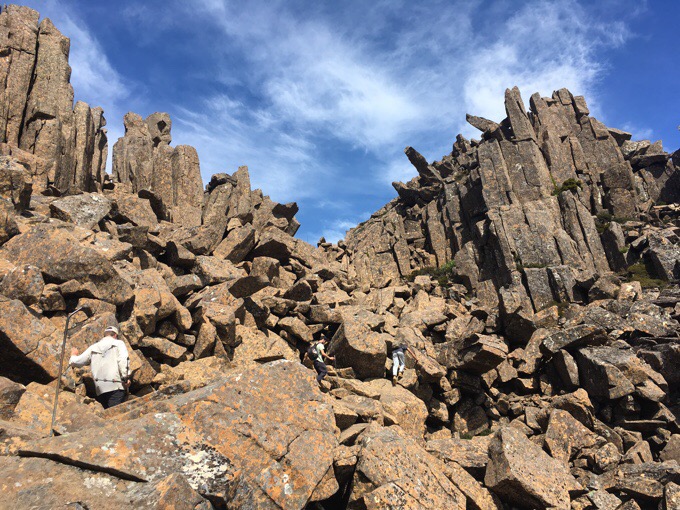 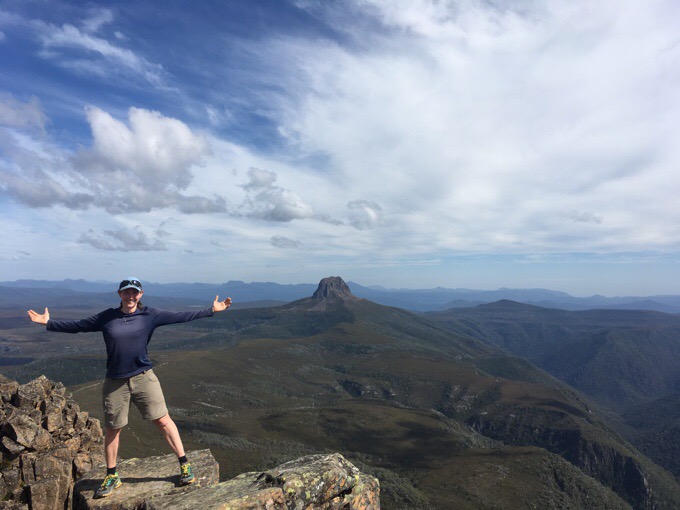 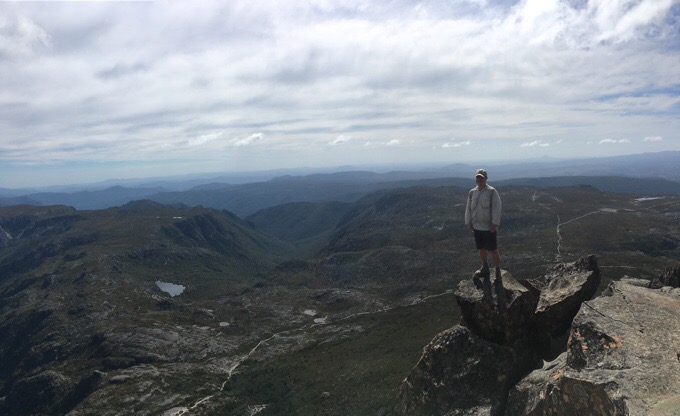 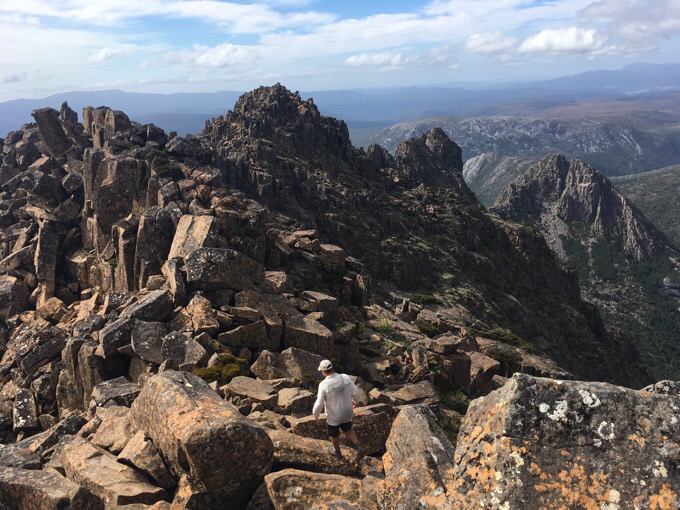 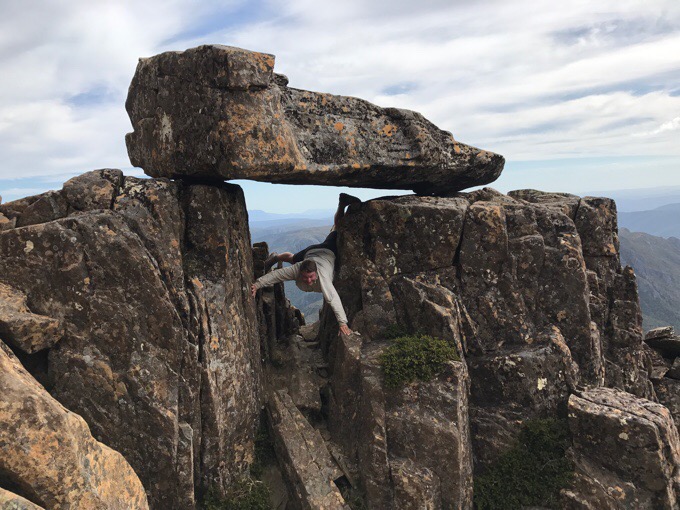 After Cradle Mtn, it was a cruise the rest of the day on boardwalk with expansive views as we approached Barn Bluff standing out on its own. 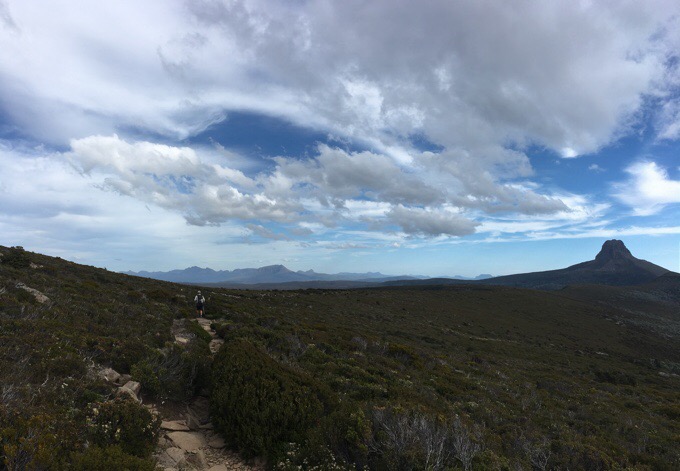 We had planned to end at a hut and camp, but then realized that we could hike 1km off on a side trail to Lake Will and have a more secluded experience. I’m so glad we did that! It is nice to have a spot all to ourselves and not be at a large hut with a ton of other people. It’s super peaceful and silent out here. Just perfect. We have Lake Will in front of us and Barn Bluff just to the side. 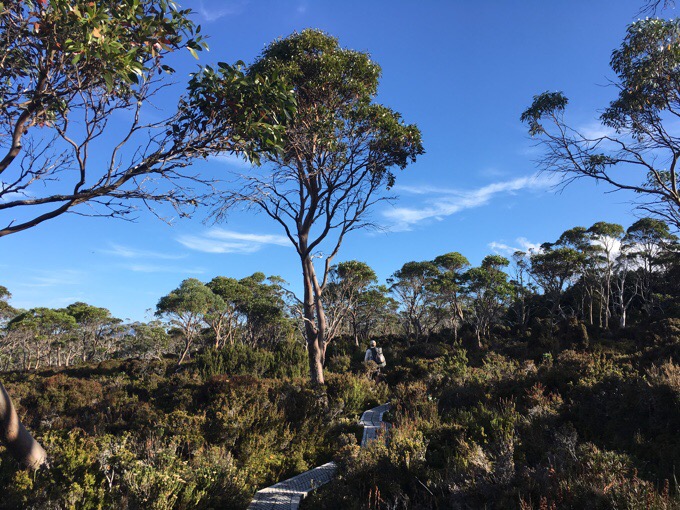 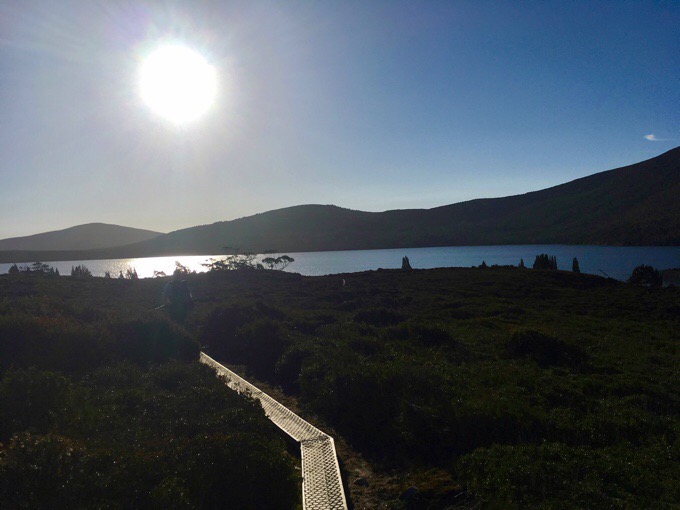 Temps dropped a good deal when the sun went down, and we did get condensation in our tents pretty quickly, darn. Well worth the price of solitude though. Just after I walked into the brush a bit to take the tent photo, I returned to find my first leech on my shoe! It totally made me squirm! It’s much quicker than I imagined and acts more like a fast worm searching for something to suck on. I got a close up shot if it, but it’s pretty tiny and about the length of a stick of chapstick. It was tricky just to get it off my shoe, so I don’t want to think about removing one that’s already attached to my skin! 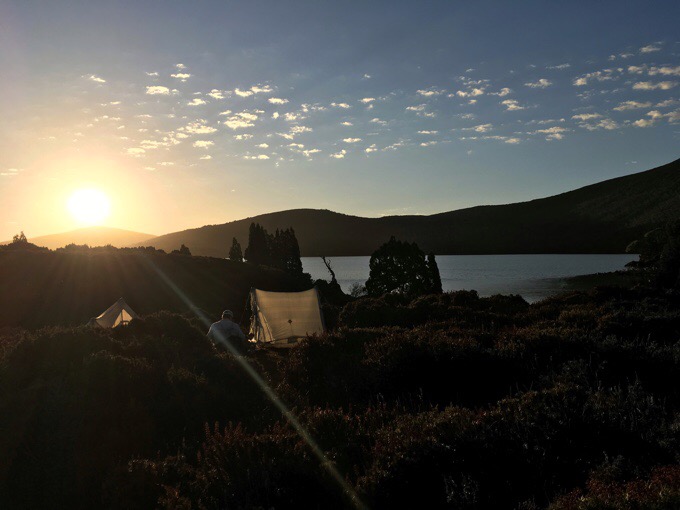 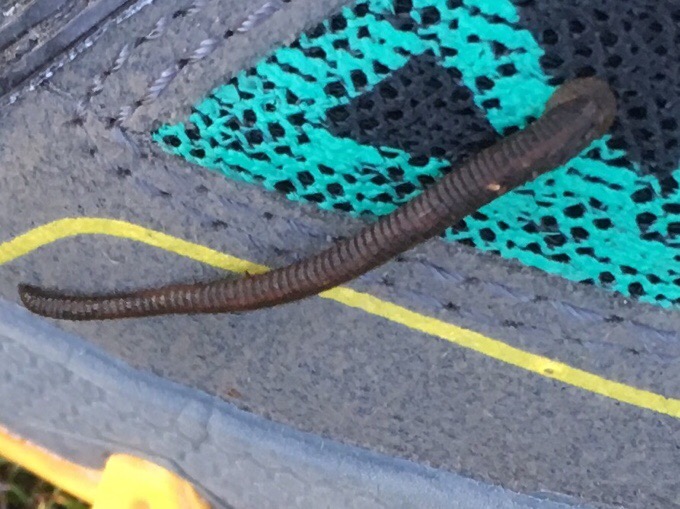 As it got dark, we could hear something of size jumping around nearby. I had my doors closed, but Griggs got to see what was either a wallaby or pademelon bounce between our tents. Both look like a cute little mini kangaroo. A great first day!

One side bonus note. Those of you that followed my Te Araroa journal, will recall a hiker named Christophe who had his pack stolen about a month ago and had to come off the trail to work to buy new gear. Many of you donated to help get Christophe new gear, and he’s finally back on trail! He wanted to be sure to thank everyone for being so supportive and sent this photo with his new gear. I will warn you that it’s near impossible to get Christophe to smile in a photo, but he is very happy and excited about this, haha. 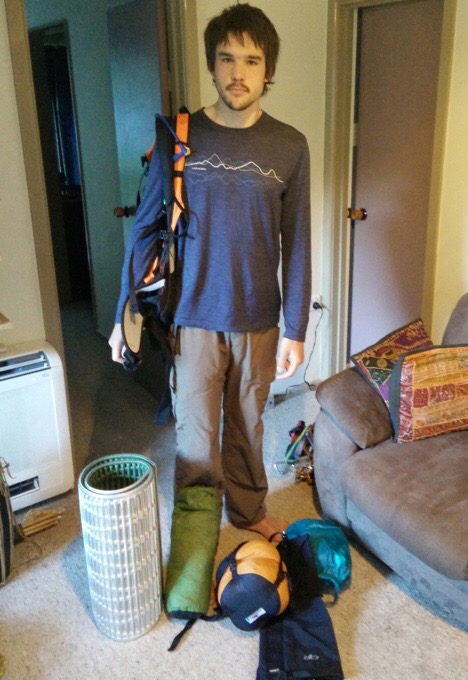 He should take 3-4 weeks to finish and the weather should hold for him. I’m excited to see that finish photo, possibly before I leave Tasmania, and I will share that with everyone. I did tell him he might need to smile on that one, haha. Great work everyone!