It was a cold one last night by Lake Will. We must have been in a pocket where cold air sits overnight. There was a ton of condensation and temperatures were in the upper 30sF/2.8C. I wore my new fleece overnight instead of my down jacket, which I prefer to use as a pillow in my sleeping bag stuff sack. I may be spoiled and ruined by this fleece with camp concept. It was pretty darn comfy. I’m becoming soft! It did make me think of returning to the comforts of home, which I’ve been thinking about more lately.

With the days we had off between the Te Araroa and Tasmania, my mind and body got pretty excited about not hiking (and not blogging!) for awhile. It’s been a packed and challenging (physically and mentally) past 8 months, and I am ready to hermit and veg out at home for quite awhile. My mind and body started to fall into that mode in our transition, so it’s been a bit of push to get it going again and to carry a solid week worth of food. I interrupted the hiking momentum and now my mind and body are resisting. I can easily envision a very near future with my fleece pajama pants, oversized hoodie, comfy bed, and marathon viewings of many shows to watch. It’s so close!…But first there’s awesome Tasmania to explore! 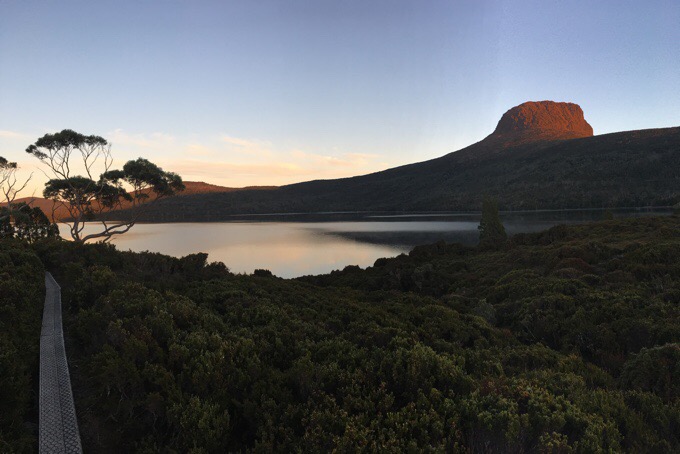 The sun rising over Lake Will and Barn Bluff.

I didn’t realize how much I missed Australia. There is a feeling here that is very calm and pleasant. It’s a subtle yet major contrast to what we’ve been doing the past couple months to feel so at ease with the terrain and weather. Not all the hiking we will do here will be this relaxing and enjoyable, but it’s a nice change of pace to start off with such good weather and trail. 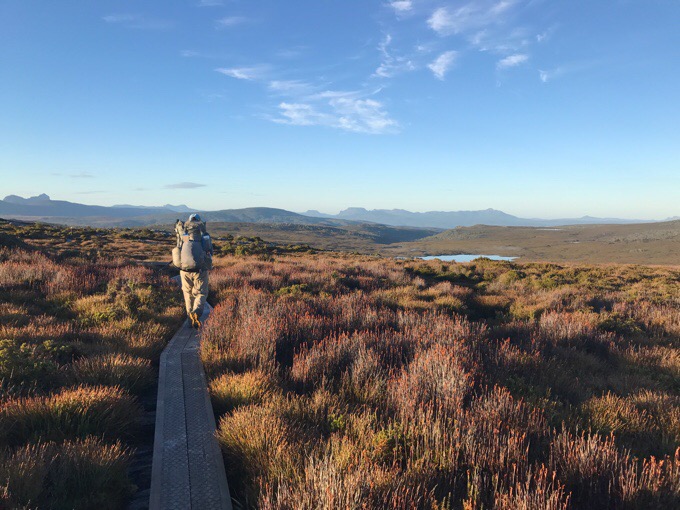 Again, there was boardwalk walking maybe half the day today. The other half was more rugged with roots and rocks. There would have been mud, but fortunately it’s been pretty dry as of late. Another great thing about being back in Australia are the animal sightings. We got going at 7:20am this morning, just after sunrise, and I was hopeful we’d see some things. We ended up seeing a wombat, a wallaby, and many pademelons in the first few hours of the day today. I don’t think I’d ever get used to seeing Australian animals in the wild! 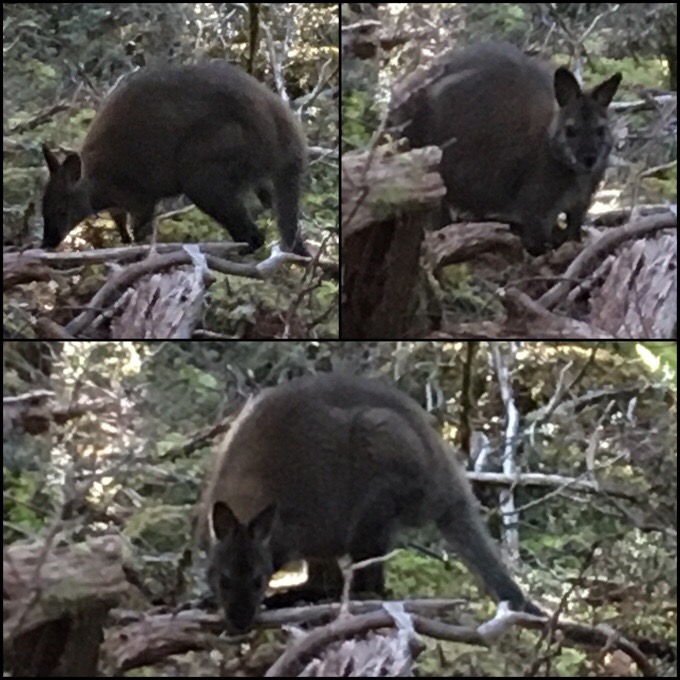 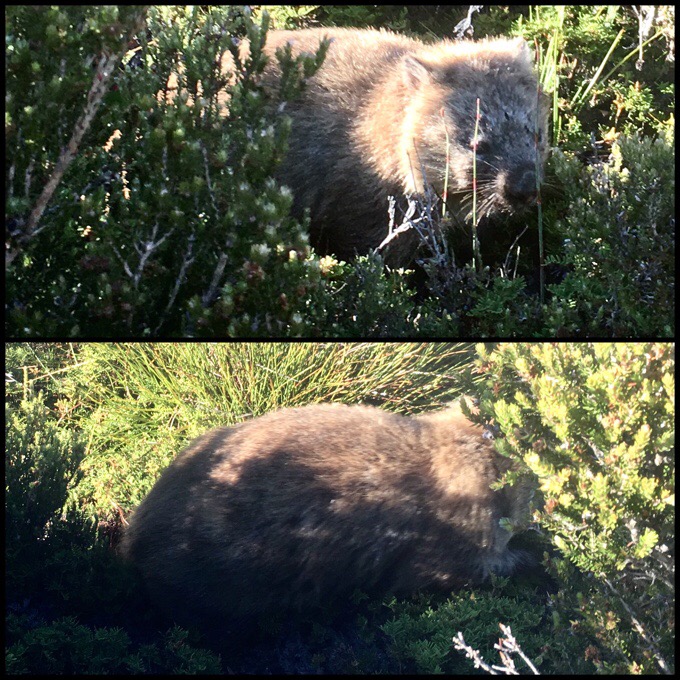 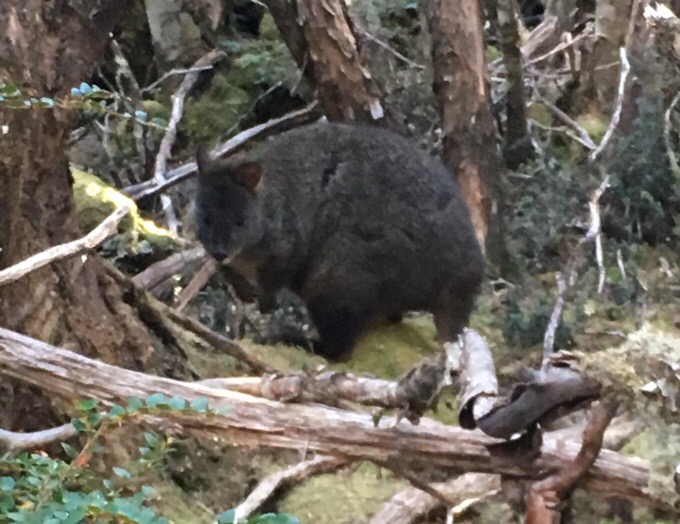 Much of the morning was forested, which I was thankful for given how hot it was today. We had lunch at Pelion Hut. It was huge with a nice view over Pelion Flats. We seem to have positioned ourselves nicely between herds since we camped between huts. Many hadn’t left this morning when we went by Windermere Hut, and everyone was gone by the time we reached Pelion for lunch. We passed a few in the morning, and one trio was at the hut for lunch, but we had most of the rest of the day without seeing many other hikers and that was nice. 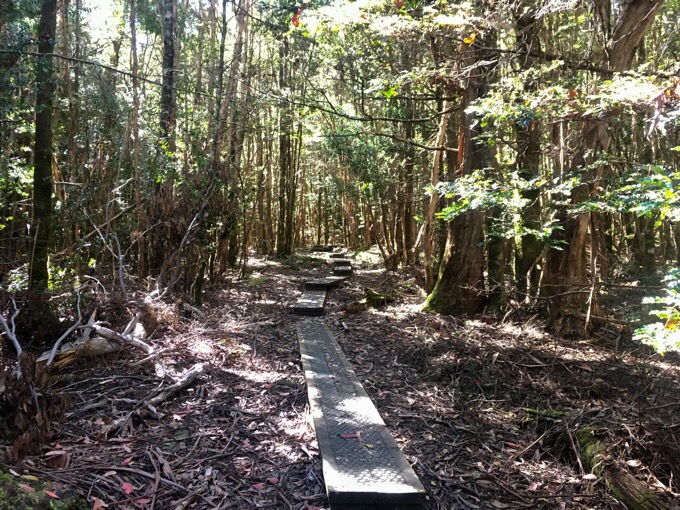 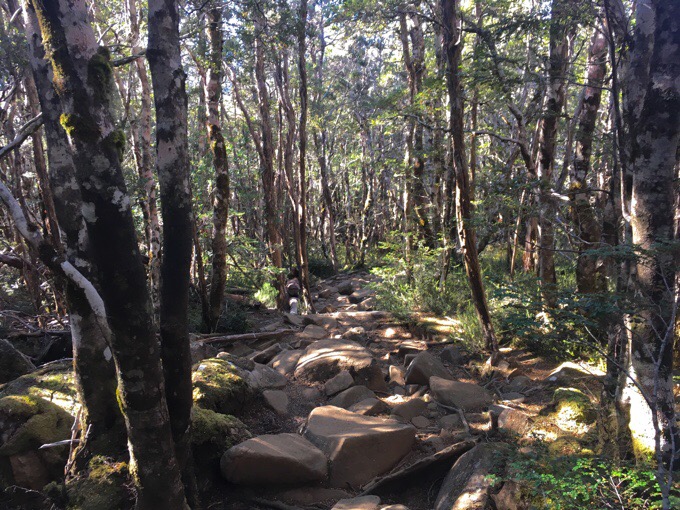 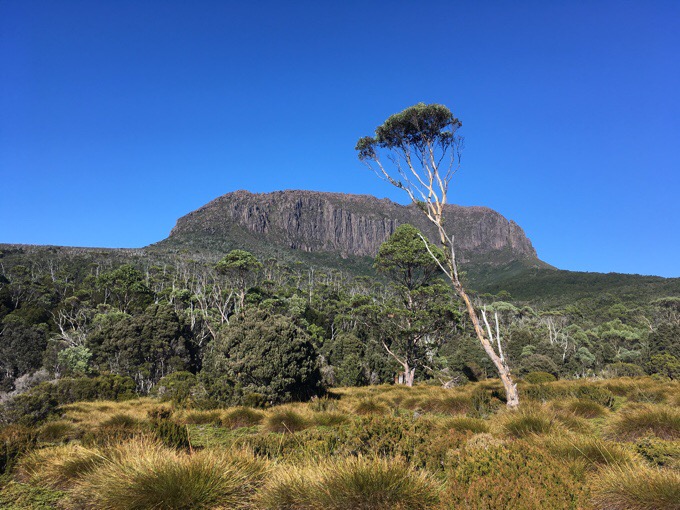 We had lunch at Pelion Hut, which is quite large with multiple bunk rooms. It had a great view overlooking Pelion Plains from the long deck. 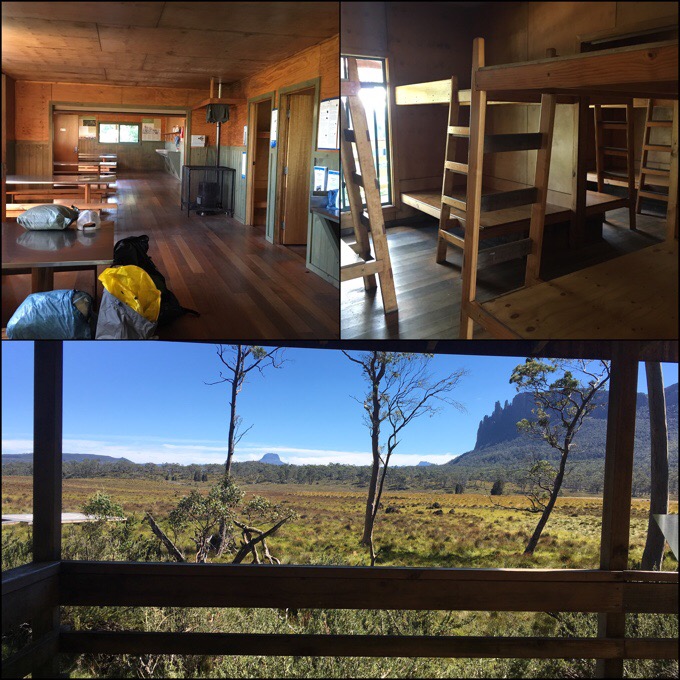 The big side trip of the day was climbing Mount Ossa, Tasmania’s highest mountain at 5,295ft/1,614m. It’s a 3mi/5km round trip side trip and we were able to leave our packs at the junction along with about a dozen others. The first part starts off with this new kind of boardwalk and steps that workers are actively installing now. There’s a lot of construction materials along the main path of the OLT and the side paths as well. It seems that some of the boardwalks we’ve been on are fairly new. 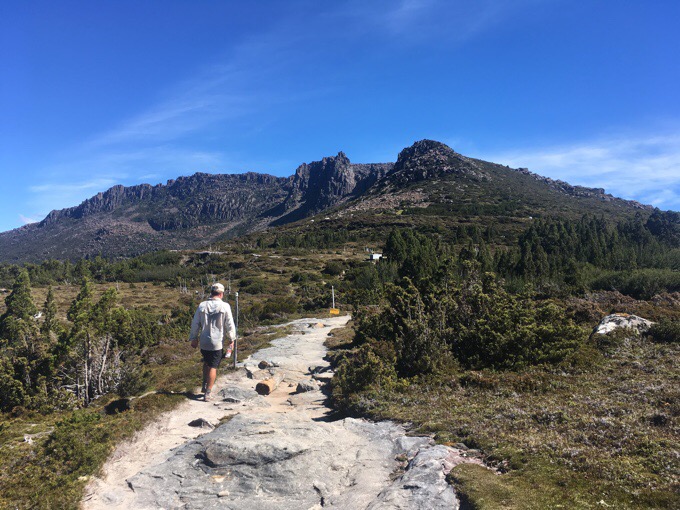 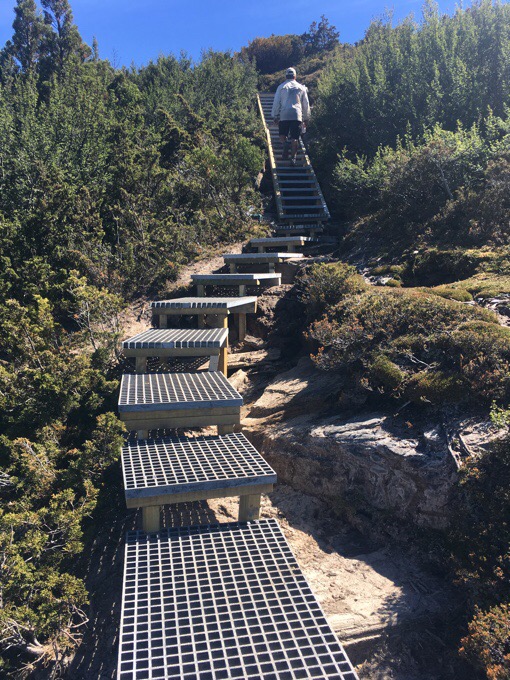 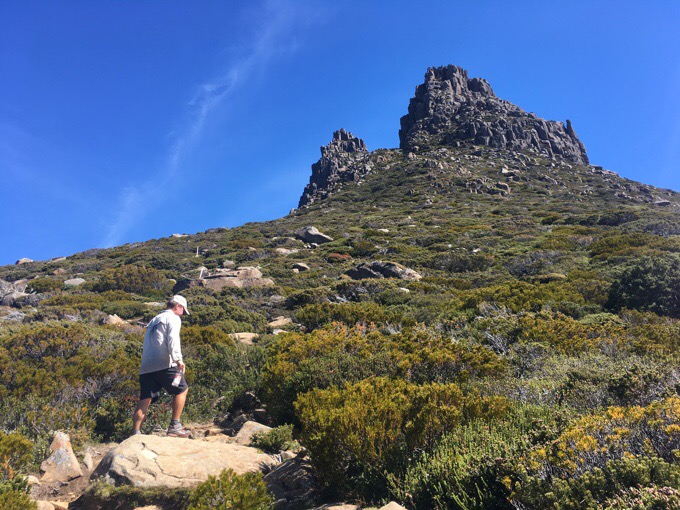 The last third of the climb is more of a scramble and the top has a nice level stretch that leads to the final large boulder field. 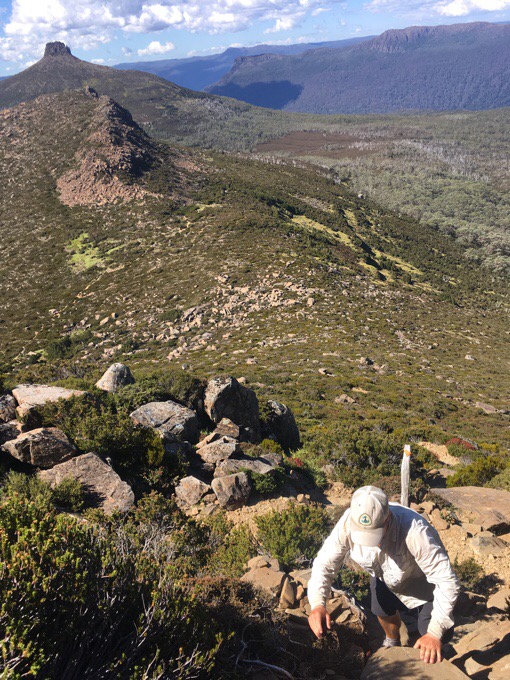 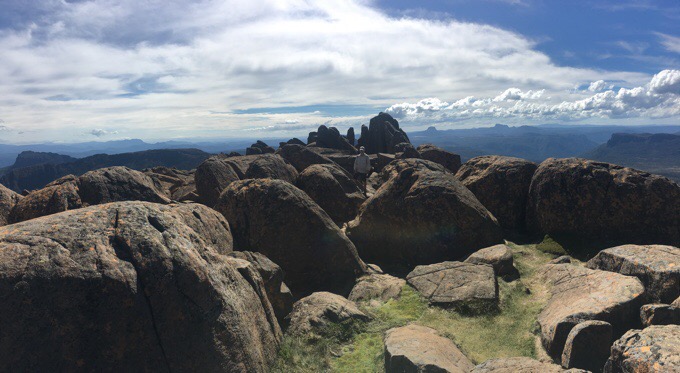 Griggs is more comfortable than I am with rock scrambling and climbed up on top of the highest boulder. Again, it’s pretty incredible that we had such nice weather to be able to do both Cradle Mountain and Mount Ossa and get views. Both can often be socked in by fog and rain. 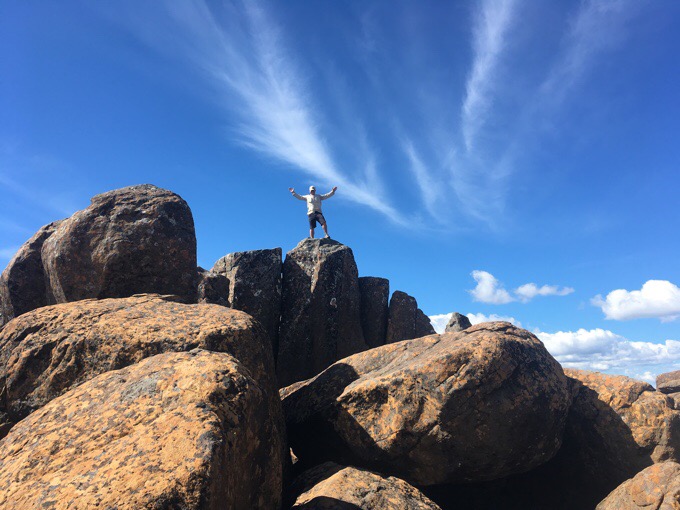 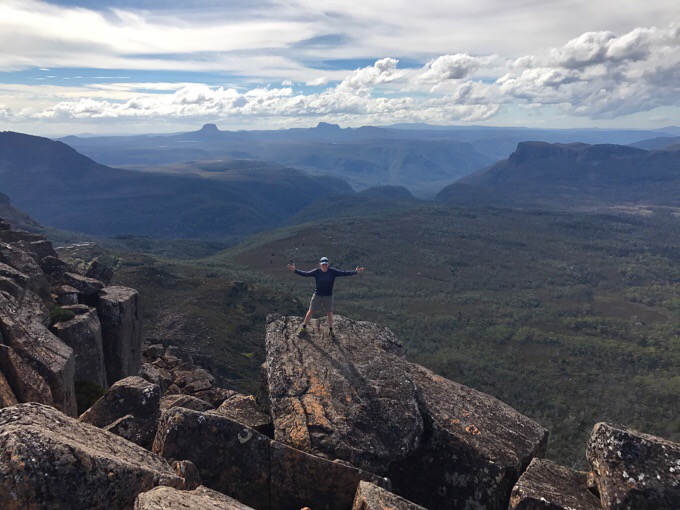 We knew phone service was possible, but spotty. It wasn’t strong enough of a signal to post the blog, which is what I expected. It’s frustrating because it really may be a week of backlogged posts before I’ll have good enough service to get them up. Griggs’s Instagram strategy is working well, and he was easily able to get a post up with many photos in Instagram’s new slideshow option. It’s a great new option that Instagram has, and I can see many using it as a simple blogging platform to journal along long trails. Again Griggs’s Instagram is @griggsdomler. 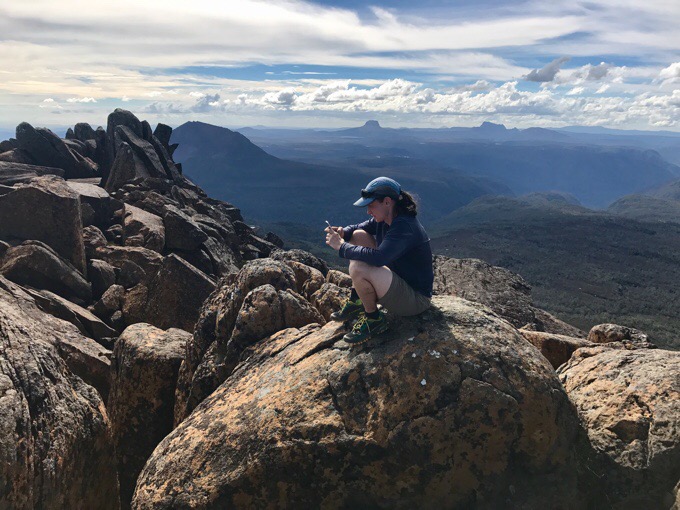 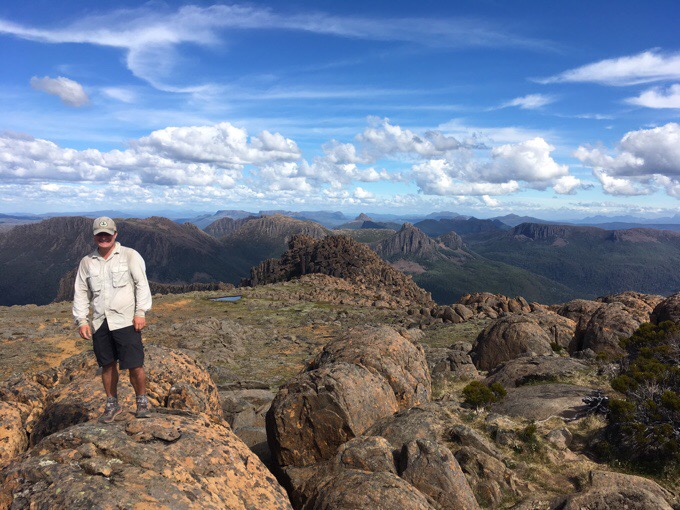 I usually don’t like out and back hikes, but the views were great on the way down. 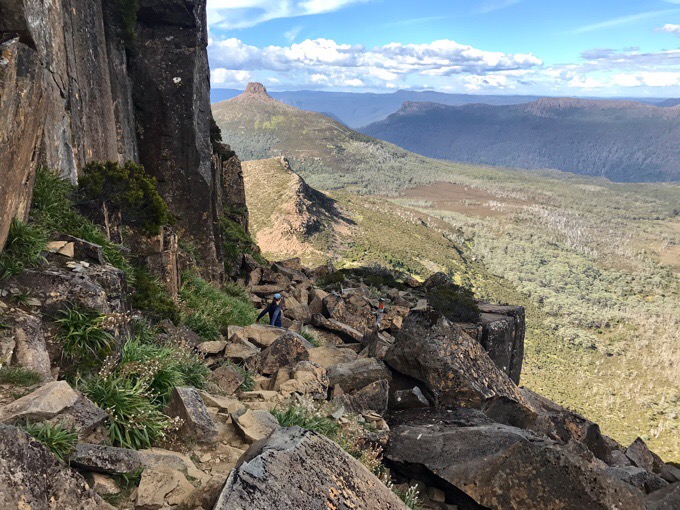 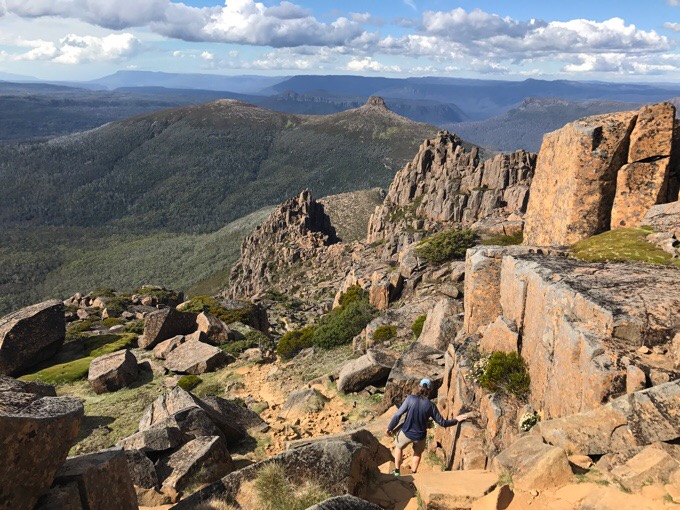 After we returned from Mount Ossa, our packs were sitting where everyone leaves their packs to do side hikes. There are signs warning of the birds and how they’ve learned to unzip packs. I moved everything out of my side pockets so nothing would get taken, but they even went for my top zipper pocket that only had maps in it. The zipper was fully unzipped and they tried to take the maps out. Griggs forgot his trash ziploc was in his back mesh pocket, so they totally pulled that out and went through that as well. Pretty smart birds! The hike from Ossa to the hut was great and classic Australia. 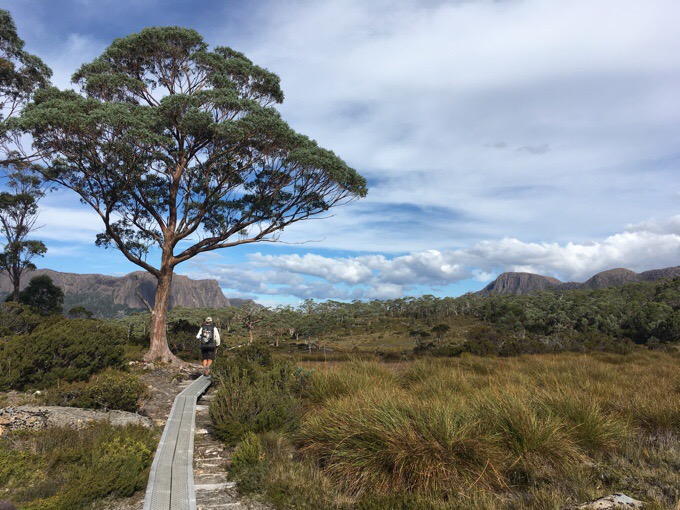 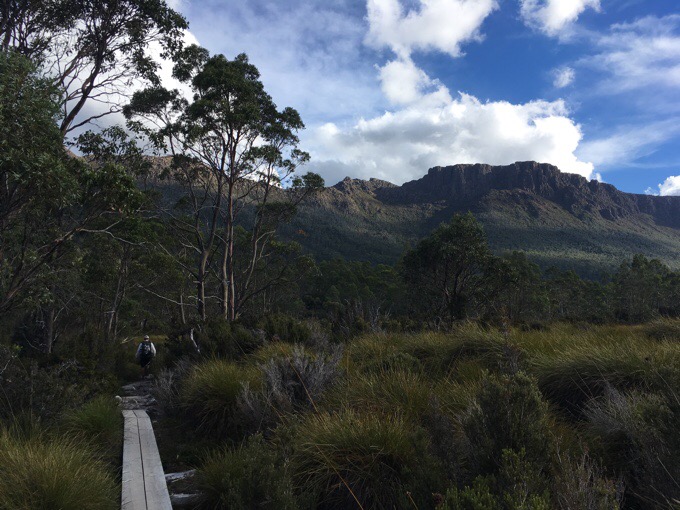 We hiked an hour to Kia Ora Hut and chose to tent. We had heard about the wooden tent platforms and that they could pose a challenge for non freestanding tents. I’ve come across these before, and can mostly stake out with the given nails and chains provided, but it’s nice to carry small hooks that screw in if need be. We did pretty well with the adjustable chains they have here and ended up needing just three of our hooks between the two of us. We have a nice spot in our own space with a good view of Mount Pelion East, which is just across from Mount Ossa. 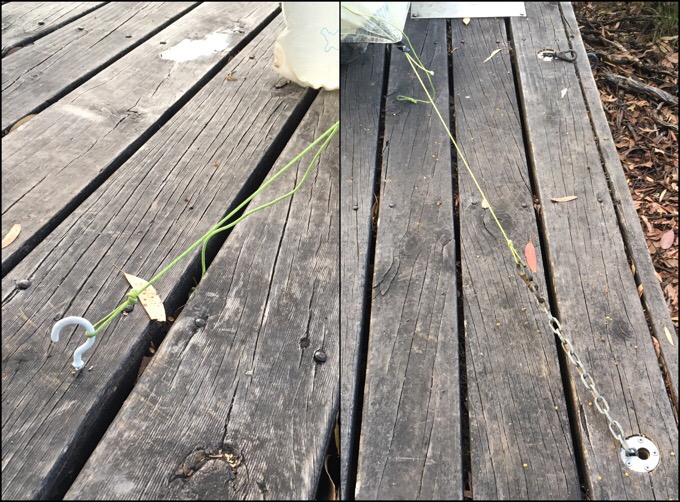 Hooks we brought and chains built into the platforms. 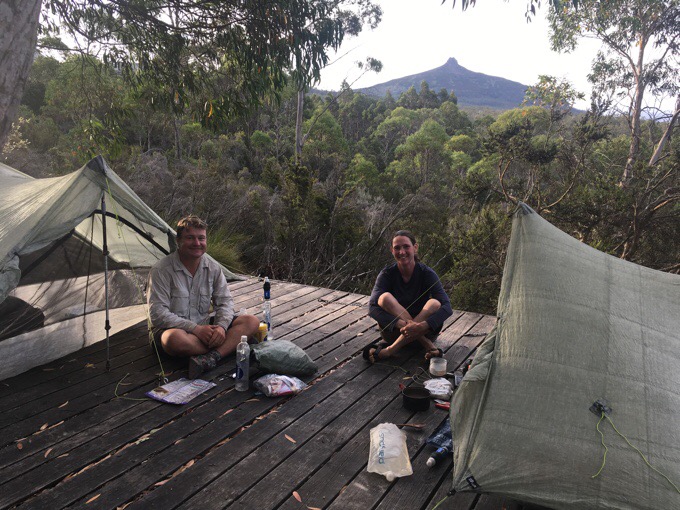 Mount Pelion East in the background.

We got to camp nice and early around 5:40pm, and I fell asleep pretty early before 9pm. It’s now 11:30pm, and I’m wide awake to write. The moon is bright and lighting up everything. There is a determined pademelon lapping the tent pad and investigating our tents. Hopefully, it will get bored enough to give up and move on. Another great day. Yep, I like you Australia!