I recently had an article published in TrailGroove Magazine that gives a nice overview of my thoughts on thru-hiking the Pyrenees and French Alps. For those of you that have been waiting for more of an advice post on hiking in France, this was just the impetus I needed to finally put something up on the blog. First, read the TrailGroove article; it concisely addresses most of the unknowns many have about hiking over there, especially if you are not accustomed to hiking in Europe. 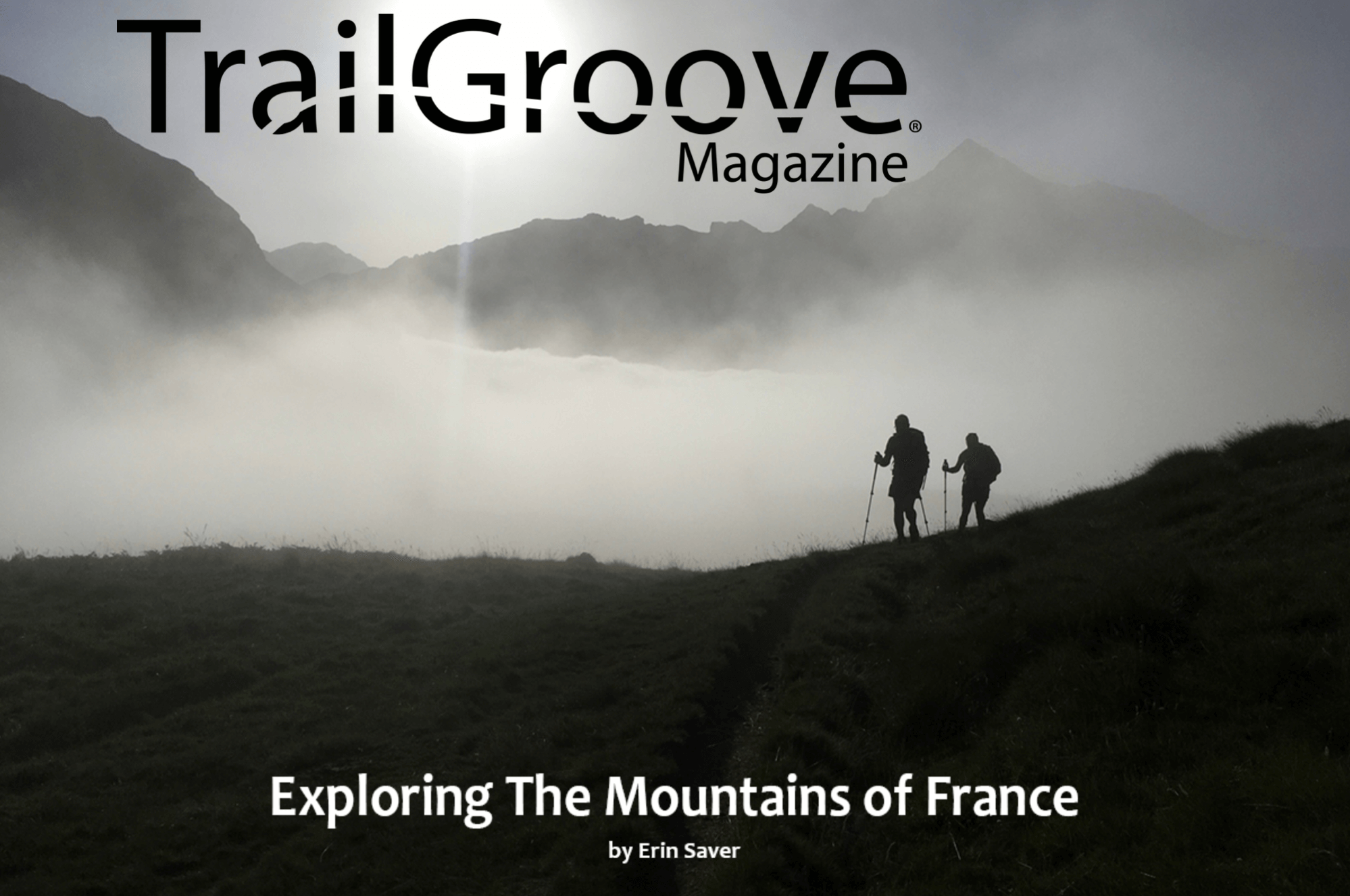 For the sake of efficiency, I think it will be best if I just do a list that answers some of the most frequently asked questions pertaining to hiking in France. I know I tend to do a more thorough breakdown in my post-trail advice, but honestly, hiking out there is pretty relaxed with a lot of resources and accommodations. I feel like a seasoned backpacker or thru-hiker could review a guidebook (I used the Cicerone guidebooks), grab their pack with a few days of food, and just head out with very little planning needed depending on what they were doing. At the end of my list, I will give some specifics on the two routes I hiked; the Haute Route Pyrenees and the GR5. Please let me know if I leave anything off this list, and I will add it. This is just what came to mind. 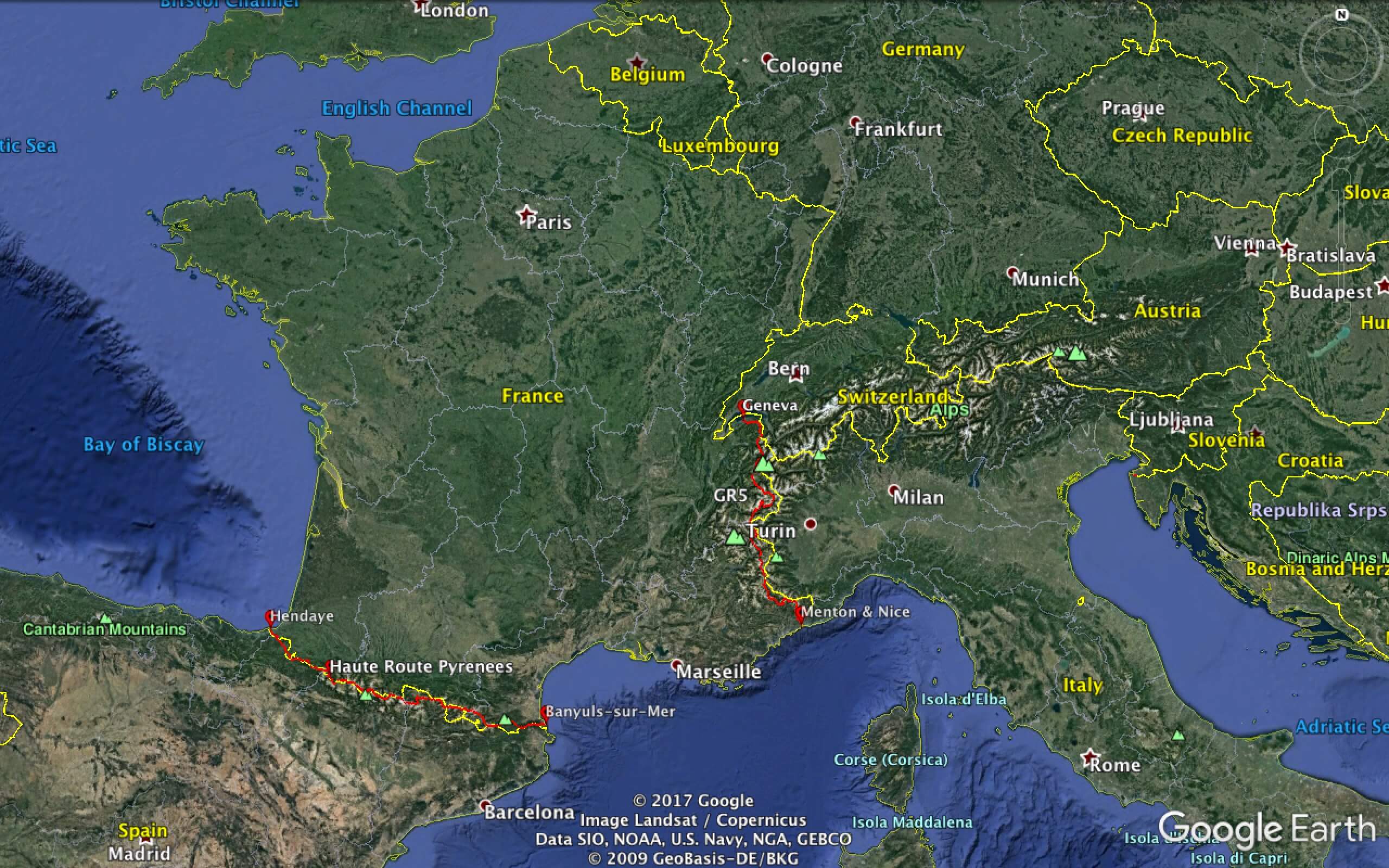 The Haute Route Pyrenees (left) and the GR5/French Alps (right).

The Haute Route Pyrenees is intended to be the higher route to take through the Pyrenees and is estimated to be ~550mi long. The current guidebook does not give mileage, but rather distance in time intervals of how long it should take to hike each section. I used Ton Joosten’s Pyrenean Haute Route Guide. The most recent HRP guidebook is now written by Tom Martens and produced by Cicerone Press. There is even an ebook option and a gpx file as well that coincides with the guidebook if you make an account on the Cicerone Press website I just linked.  Tom’s HRP Facebook Page is also a wonderful source of information from current and previous HRP hikers. If you are able to read French, a popular guidebook that’s known to be even more adventurous is Jerome Bonneaux’s Trans Pyr’.

The route you will be on, is not signed as the HRP, but often overlaps other routes and paths that are already clearly marked and defined. There is some cross-country (maybe 20% max) that is not on a clearly defined and marked path. The HRP lies between the GR10 on the France side; and the GR11 on the Spain side. Both of these actually have more elevation gain than the HRP because they go low almost daily to end at a village or refuge. The HRP chooses to take the higher and more exposed route that can often also require longer carries between resupply points. The HRP does overlap some well traveled areas where there may be groups of people for periods of time, but it is more often than not, in solitude. I highly recommend this route, but I warn anyone going to hike anything in the Pyrenees, IT IS NOT FLAT! There are few times when you will have a relaxed cruise along a ridge line. You are more often going either steeply up or down. However, I will also say that the HRP is the  most scenic trail I’ve ever done per mile. There is hardly ever a time when you are not taking in a sweeping view. Here is the link to my detailed daily journal. The guidebook I used recommended 45 days for this hike without factoring in rest days. In thru-hiker condition, I was comfortably able to do the hike in 36 days with two zero (rest) days.

The only major note to know is that you will likely want to carry traction devices (ice axe on high snow years) if you start your hike in June or early July. The main passes for snow are right about the midway point. Day 17 in my journal describes the passes in detail and you can reference it in the guidebook. After that, you will not have a need for traction devices and can send them ahead or home. The intimidating crux of the trail (in my opinion) that is the only real exposure that I found frightening was Coll de Mulleres on my Day 18. If you don’t like exposure or heights, you’ll want to look at that before doing this route. Other than that, the route is just the right challenge for a nice high route, and I highly recommend it to those who don’t mind a workout, ha!

The GR5 is ~400mi long and goes from Lake Geneva to Nice or Menton. The GR5 does extend much further north for hundreds of miles, but this section is the one that everyone truly thinks of when referencing the GR5. The GR5 was the perfect blend of a hike for me. I’ve never been more relaxed on a trail than I was on the GR5. There were an abundance of options to seek shelter and/or get food if needed. Knowing that made the GR5 very laid back, and provided the opportunity for a very free formed hike. Many do this hike without a tent or even sleeping bag because the guidebook is setup in a way that has you landing in a refuge, gite (hostel), or village daily if you like. Although many do not tent, I was able to tent almost every night, and was only required to stay in a refuge one night in Vanoise National Park. Note that I was also hiking lengthy days that allowed me the ability to hike outside of restricted camping areas if need be.

The guidebook I used was Paddy Dillion’s Trekking the GR5 Trail: Through the French Alps from Ciceron Guidebooks. There was another guidebook popular with the French speakers called GR5 Topo Guides. If you are looking to do a high route version of the GR5 that goes into fewer villages and stays in more remote and higher places, and you can read French; Jerome Bonneaux’s Trans ‘Alps guidebook comes highly recommended. Here is a link to my detailed daily journal. The guidebook recommends 32 days (not counting days off) to hike the GR5 with a commonly done bonus scenic ending in Menton. In thru-hiker condition, I was able to relaxingly hike the route in 24 days with a 1.5 day side trip to Chamonix (must do!) and a zero day for a snowy day early on.

Here are some notes to reference for the GR5 because there are a few options to choose from. Using the guidebook and referencing the links I give here for my daily journal will help you to decide.

Whew, I hope this is helpful for everyone. As I said, hiking out there is really straightforward with many resources along the way. You could likely grab a guidebook and just go, but looking at all of this will give you a good idea of what to expect and which alternates are recommended. Have a great hike!