It’s Not If But When…

We left the Elbrus Home at 8:30am after some breakfast and storing our bags of food for later in the trip. We think we will be back there in about 35-40 days. I do recommend the Elbrus Home, but it seems to be iffy with the hot water for showers. They have signs saying to let them know if the water isn’t hot enough, but each time, it would start off warm and then go to lukewarm or cold. It just wasn’t worth getting out once already in. Just worth noting, but I really think that’s just how it is out here.

We got to the airport smoothly, going early to dodge the major morning traffic. I had moments of gratitude for how solid Griggs and Buck-30 have been. There’s just this security in being with two people who have their shit together and function at an efficient level. It’s so valuable on this hike because we will be encountering so many more challenges than a regular thru-hike. Being around people who don’t add extraneous challenge to an already demanding trip is just something I can’t appreciate enough!

When we arrived at the airport, Kishor (our required guide for the first two weeks) met us with plenty of time to relax. Somehow, he magically was speaking English! We had some hesitation in meeting him yesterday because he could not confirm that he spoke English and we could not seem to communicate much. We don’t know what happened overnight, but not only was he speaking English fairly well, he was also adorably energized and taking photos everywhere with his selfie stick. We knew we had the right guide when he and I were able to compare selfie sticks and joke around immediately. This is going to be fun to hang with Kishor. He says most of his guiding is in the high mountains of Kazakhstan-Russia. He has done this trek we are doing out and back to Kanchenjunga Base Camp one other time as well, so that’s nice. Our agent Urja with Alliance Adventures did a great job of picking the type of guide we requested. One willing to hike long days, not bring a porter, and carries a tent and some food to be independent of the houses if need be. 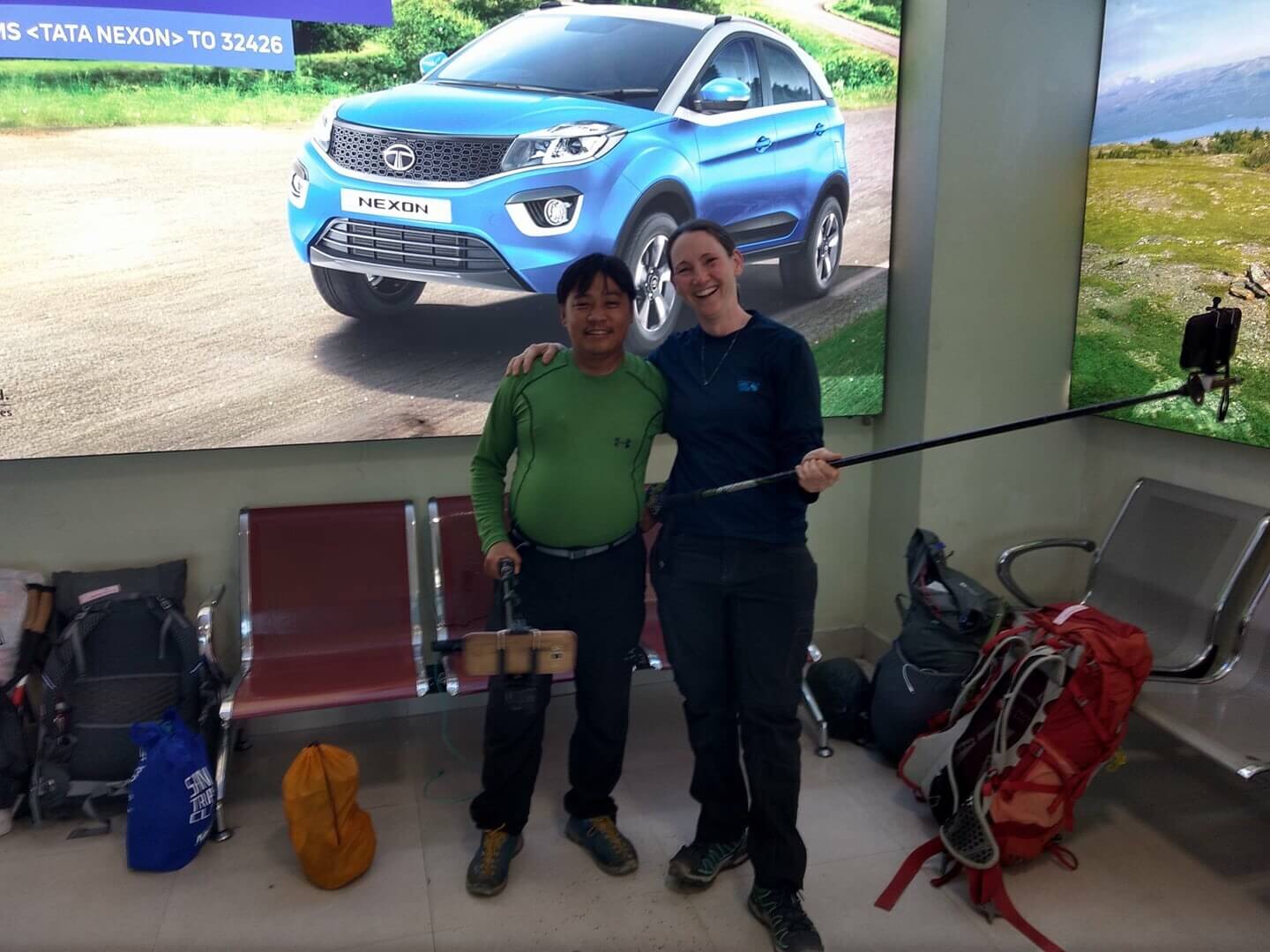 Our flight to Bahdrapur was 1hr 15mins delayed, so it was nice to get last minute things done on our phones before we soon lose cell service for weeks. Know that I see all your comments on the blog, Instagram, and Facebook. Although I can’t reply to them all, they are a great boost, so thank you! We’ve all come so far over the last 7yrs together. Just crazy when you really step back and think about it.

Our biggest x-factor of the day was what jeep or car we’d get for the estimated 12hr drive to the start of the Great Himalaya Trail in Taplejung. The Bahdrapur Airport security by the way was hilariously lax and unfathomable. We truly do wonder if we could have brought fuel canisters. There were so many people that they were just ushering people through even if the metal detectors were going off like crazy. We did get to weigh our packs including 7 days of food and were happy to find we were all right where we expected. Wired: 32lbs/14.5kg, Griggs: 31lbs/14kg, Buck-30: 33lbs15kg, Kishor: 20lbs/9kg. The 7 days of food is unfortunately more at the end of the leg, so Kishor is carrying much less food. Bhardrapur Airport was just out along a field. We didn’t even go inside. A big trailer hitch was filled with luggage and it was handed out in a calm chaos of crowds and bags. 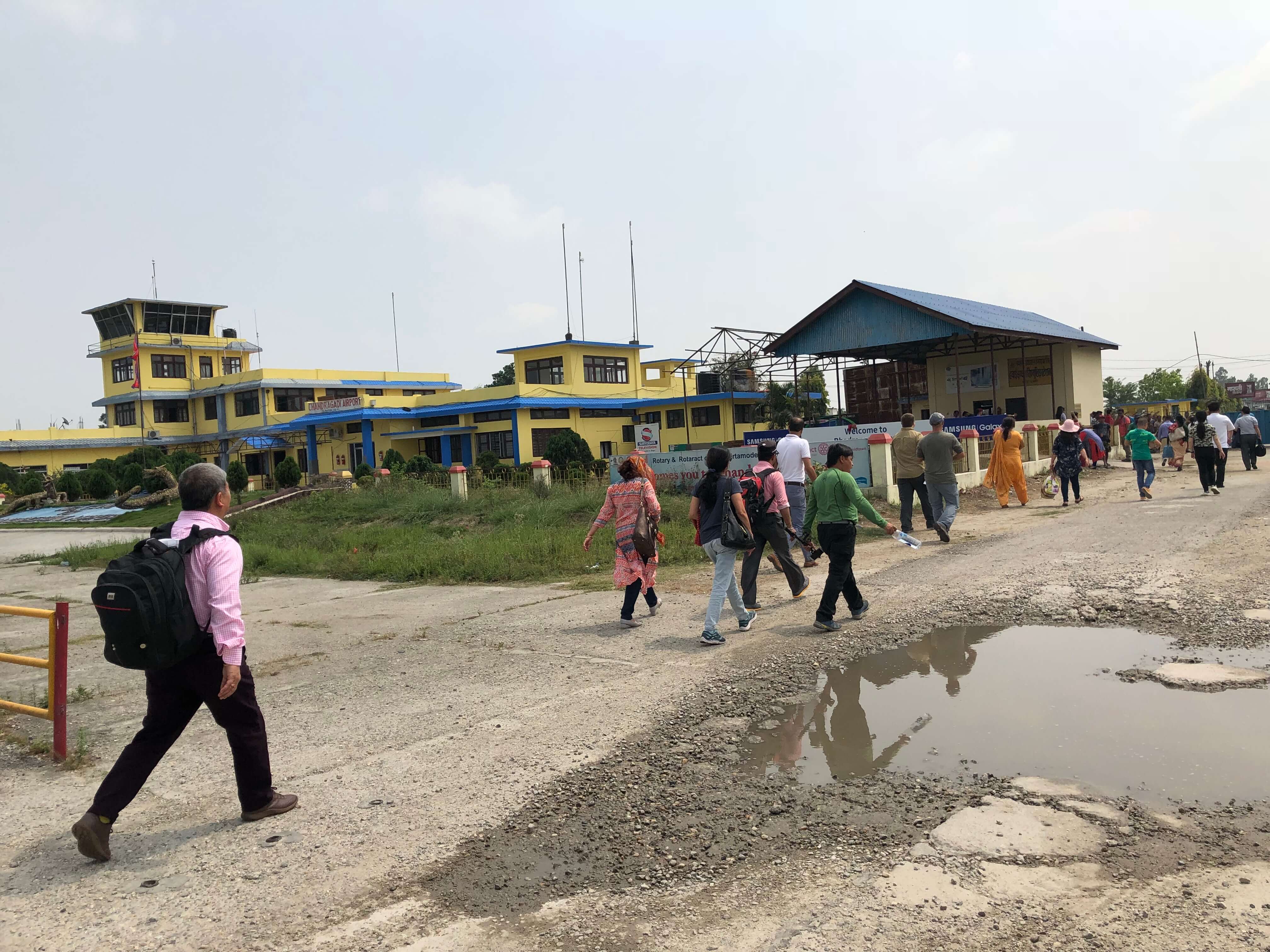 We were told the 12 hour drive to Taplejung could be $300 or more. It was great to watch little Kishor stand among a crowd of men shouting proposals to him in Nepalese. He calmly picked one, told us it was just $180 (what!? amazing!) for the driver to do over half the drive today and spend the night with us and finish up tomorrow morning. We had a vehicle with good legroom, but no seatbelts, and were off after our driver stopped by his house to grab his coat. 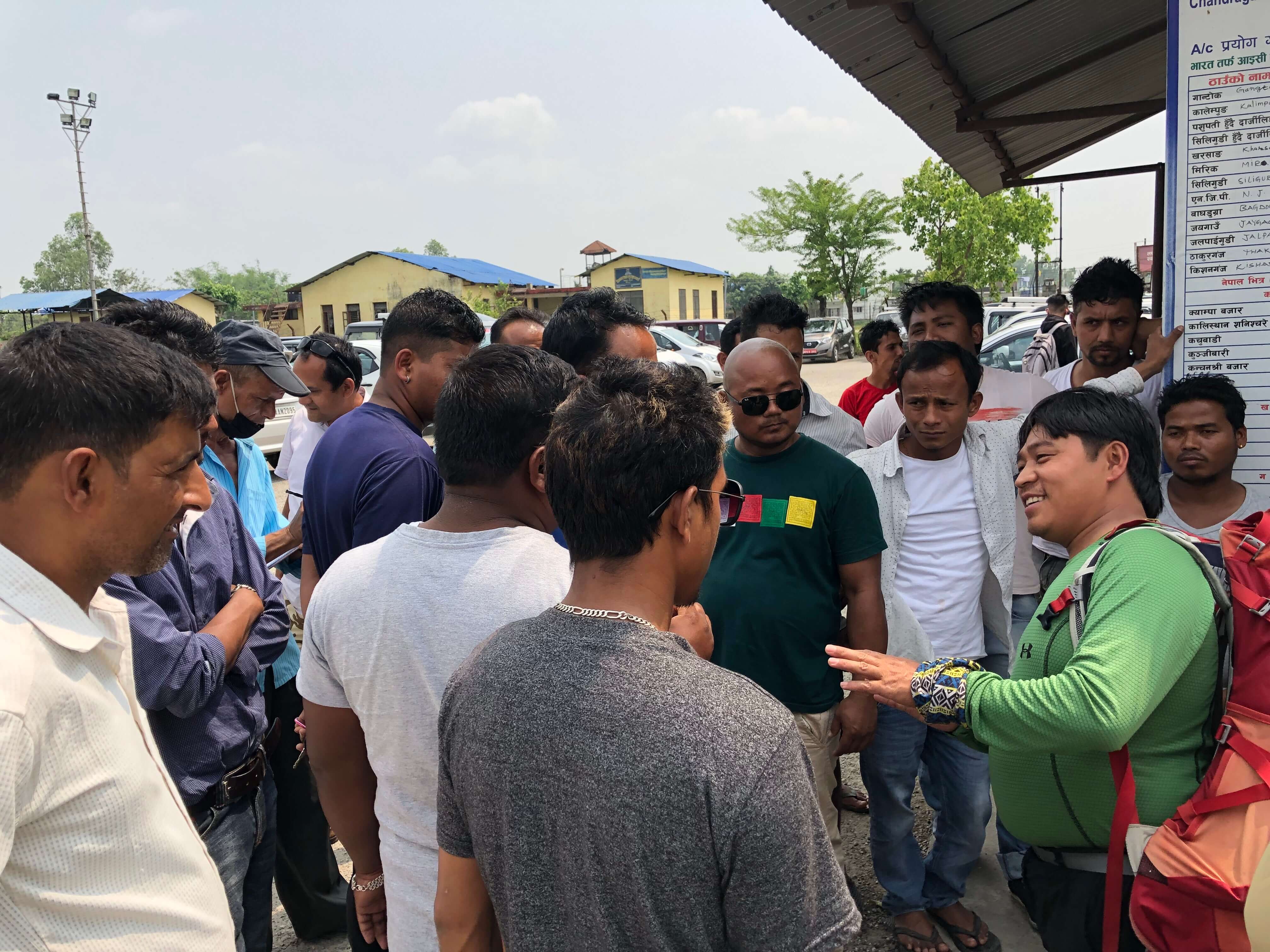 I’ll skip the details, but the 6.5 hour ride today started off more rural on quite bumpy roads, and then got on some paved roads, and eventually on very windy roads going up to 7,000ft at one point from basically sea level. I’m shocked the vehicle can take it. The views were nice, and it was surreal to be in such a far corner of the world. There was a ton of traffic with cars barely weaving away to avoid a head on collision constantly. The drivers have this mix of honking and hand signals to pass and weave in and out of one another. Our driver is awesome and smoothly dodges and weaves. It’s quite an art in a way. 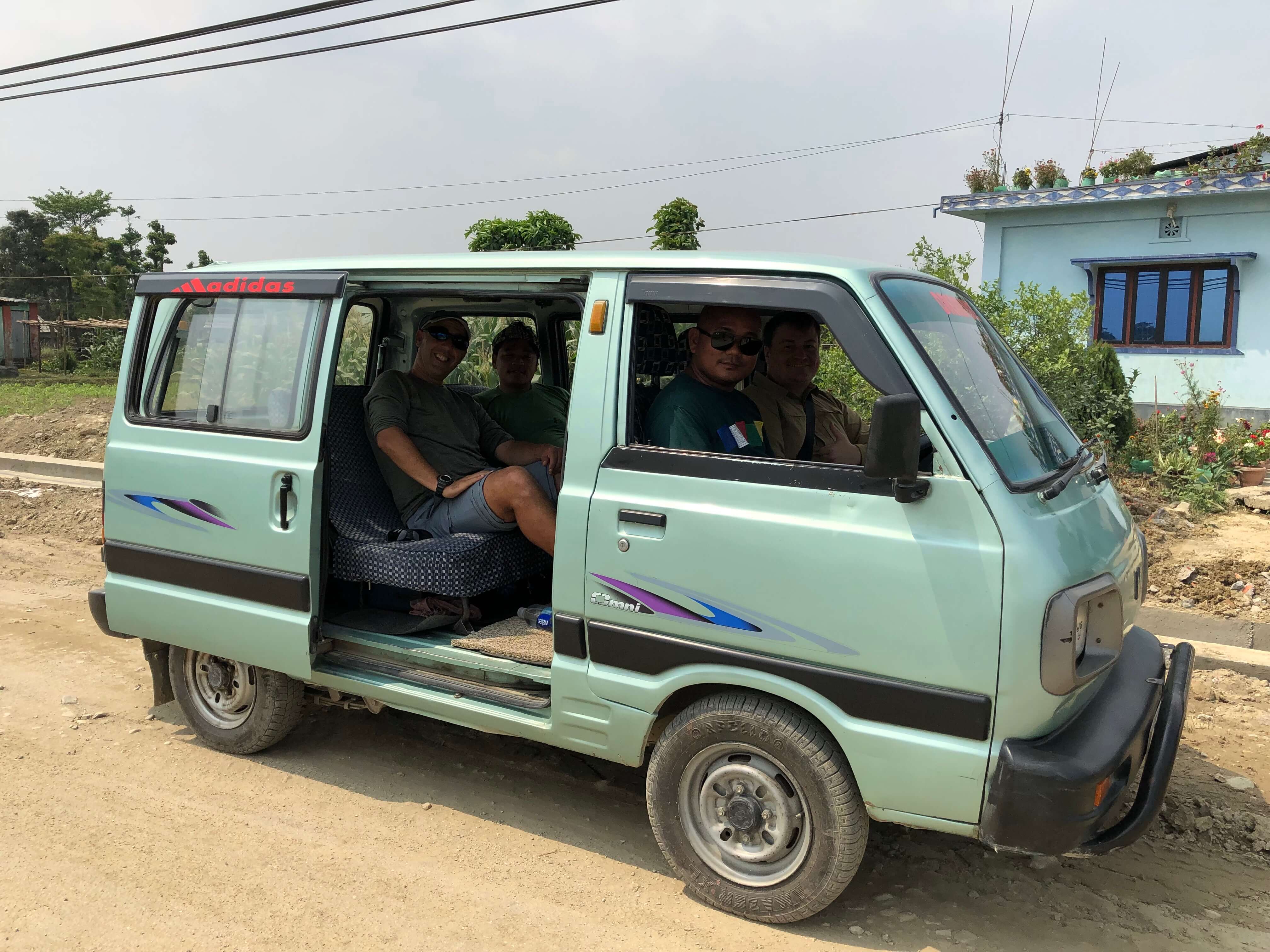 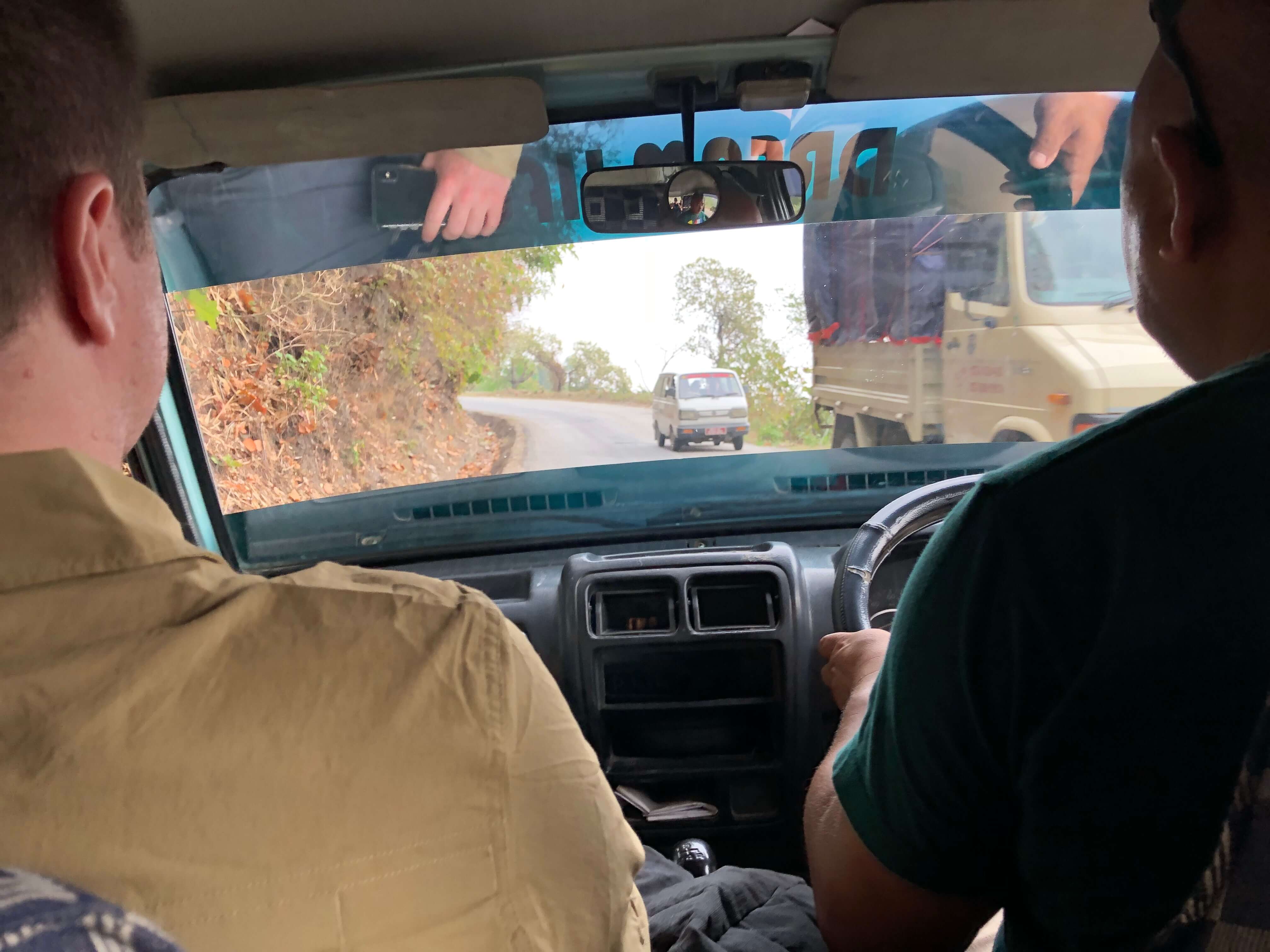 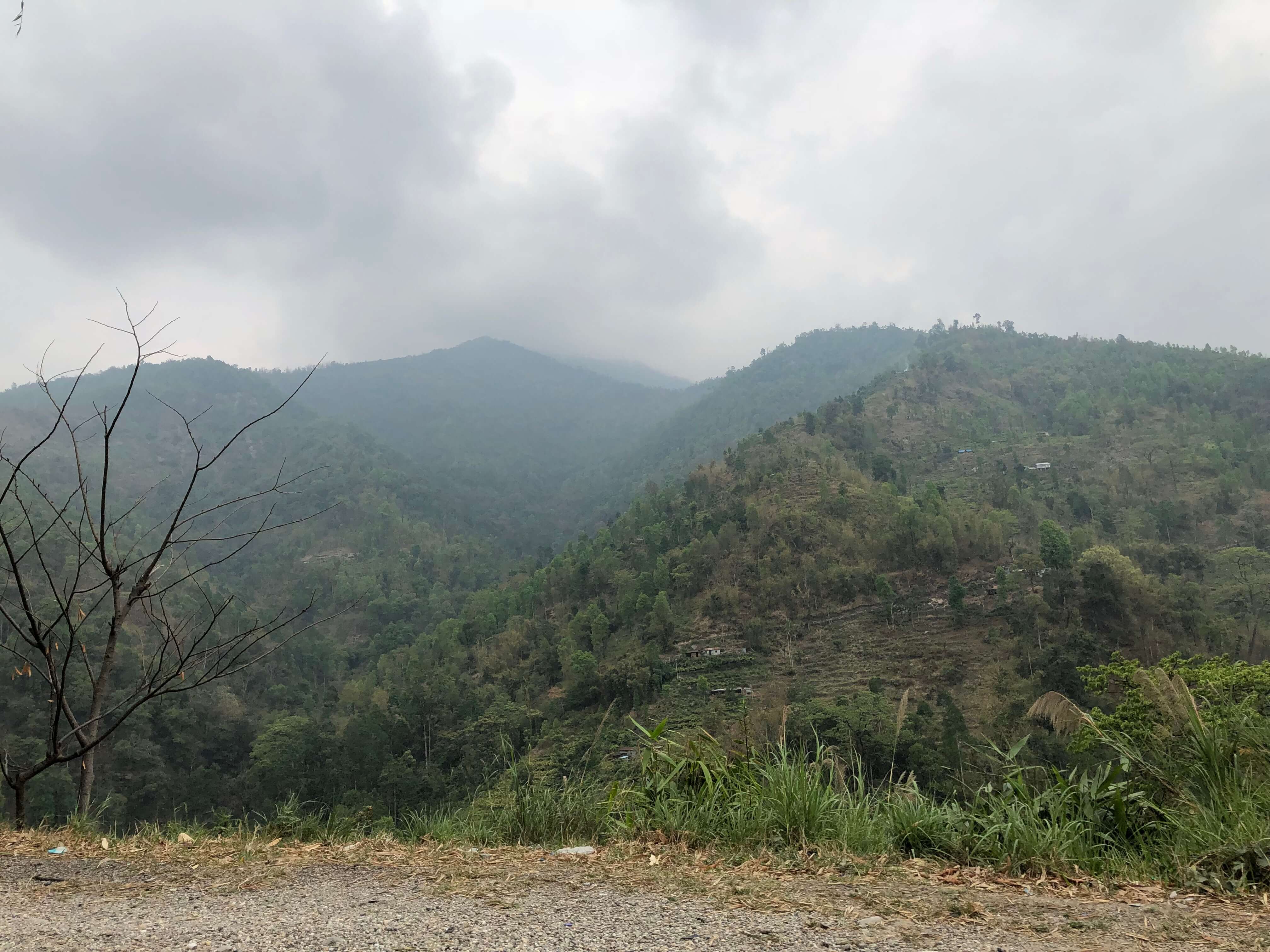 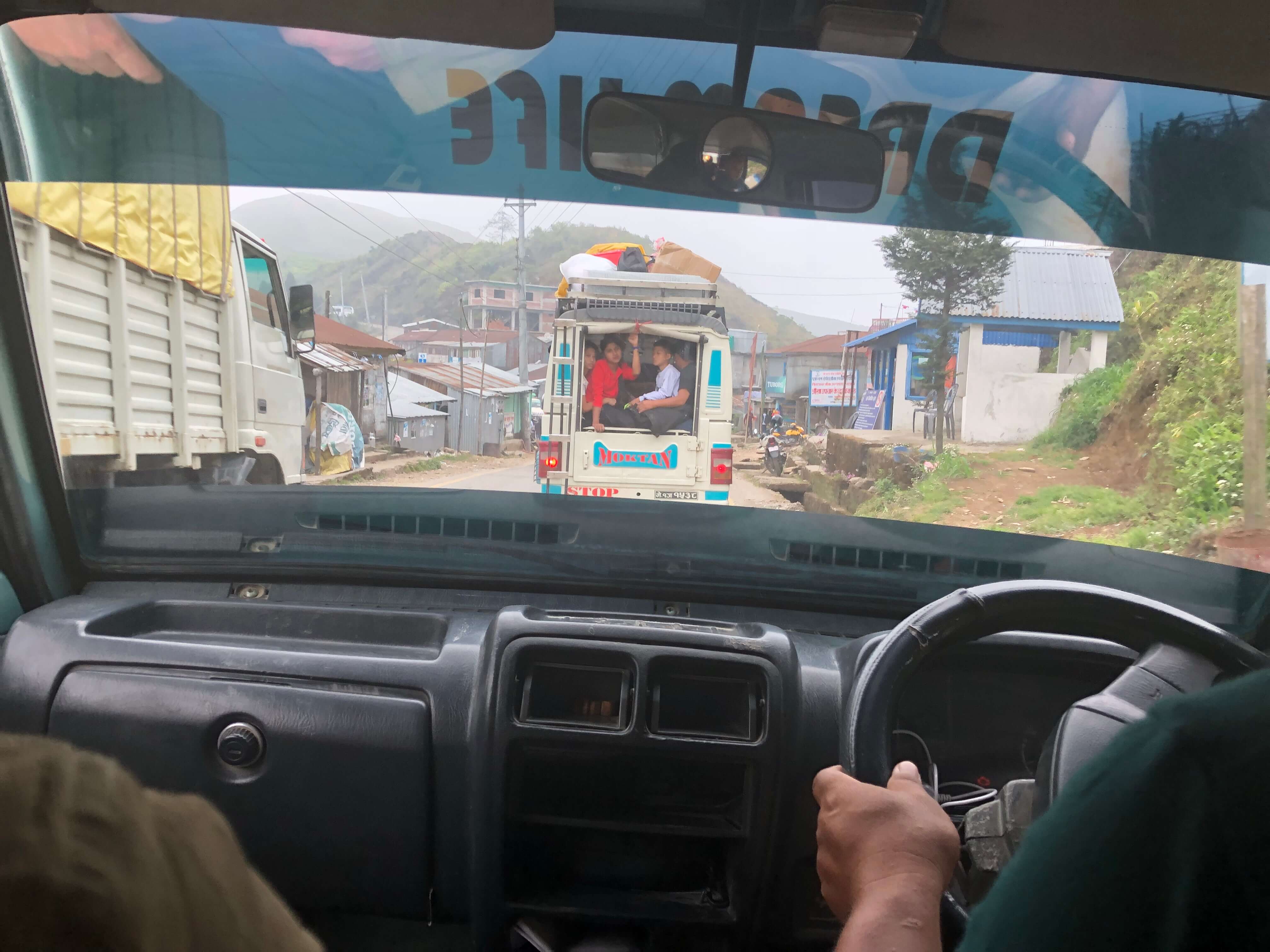 Kids just riding open on the back of the van ahead of us. 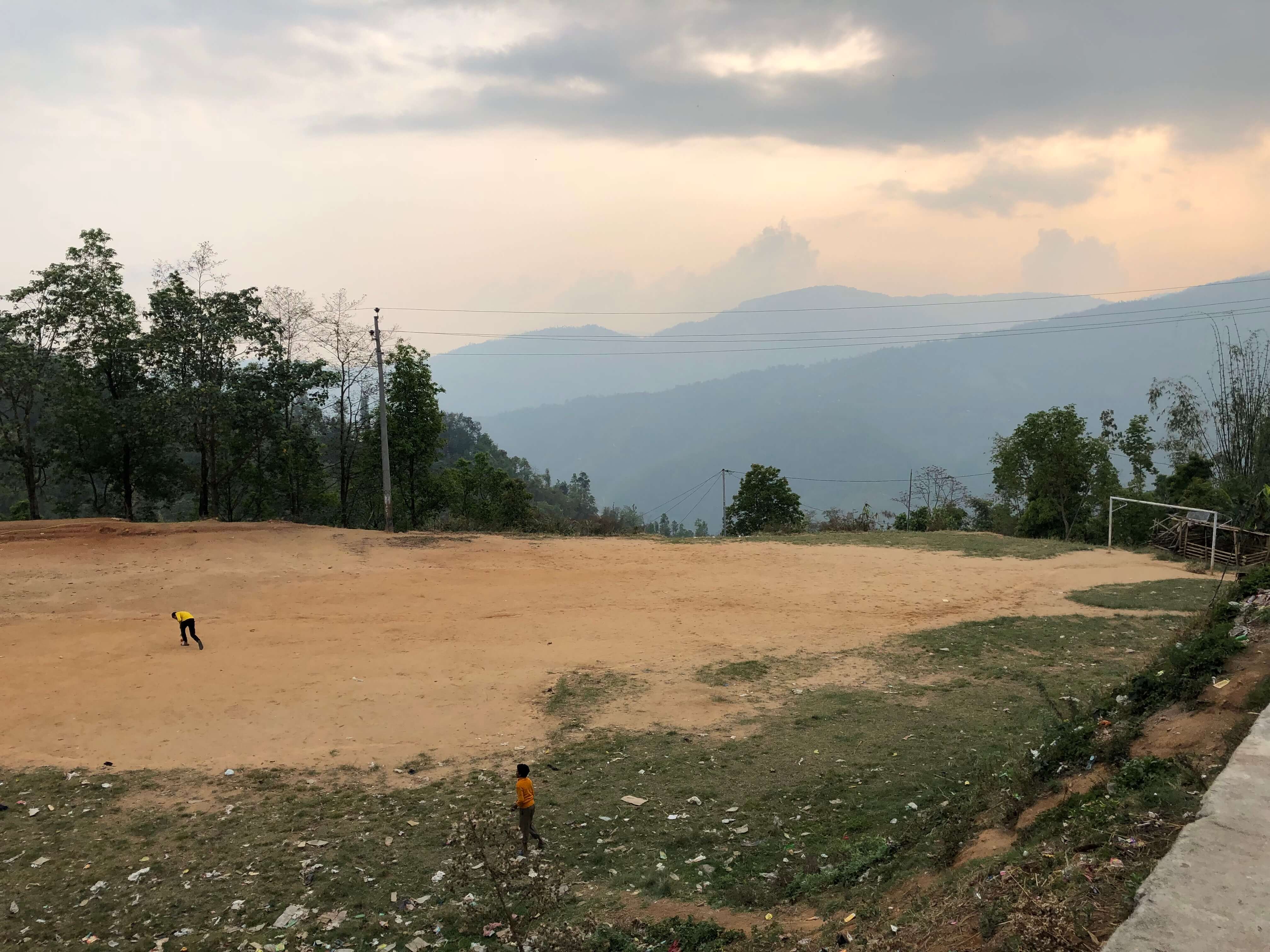 After almost 4hrs, we stopped to get food. I get car sick and was doing ok, but felt gassy as the day went on. I took Dramamine when we left the airport and wore some motion sickness bracelets I’ve never tried. I could tell what I was feeling was likely not motion related. I used the bathroom when we stopped and had some slight diarrhea. We had actually commented how crazy it was that none of us were starting with stomach issues because most hikers do as they are adjusting to the food and bacteria I guess. We all have tons of meds as we’ve been told we will have plenty of vomiting and diarrhea on this trip. It’s not a matter of IF it will happen, but WHEN. Unfortunately, for me, the when was today… 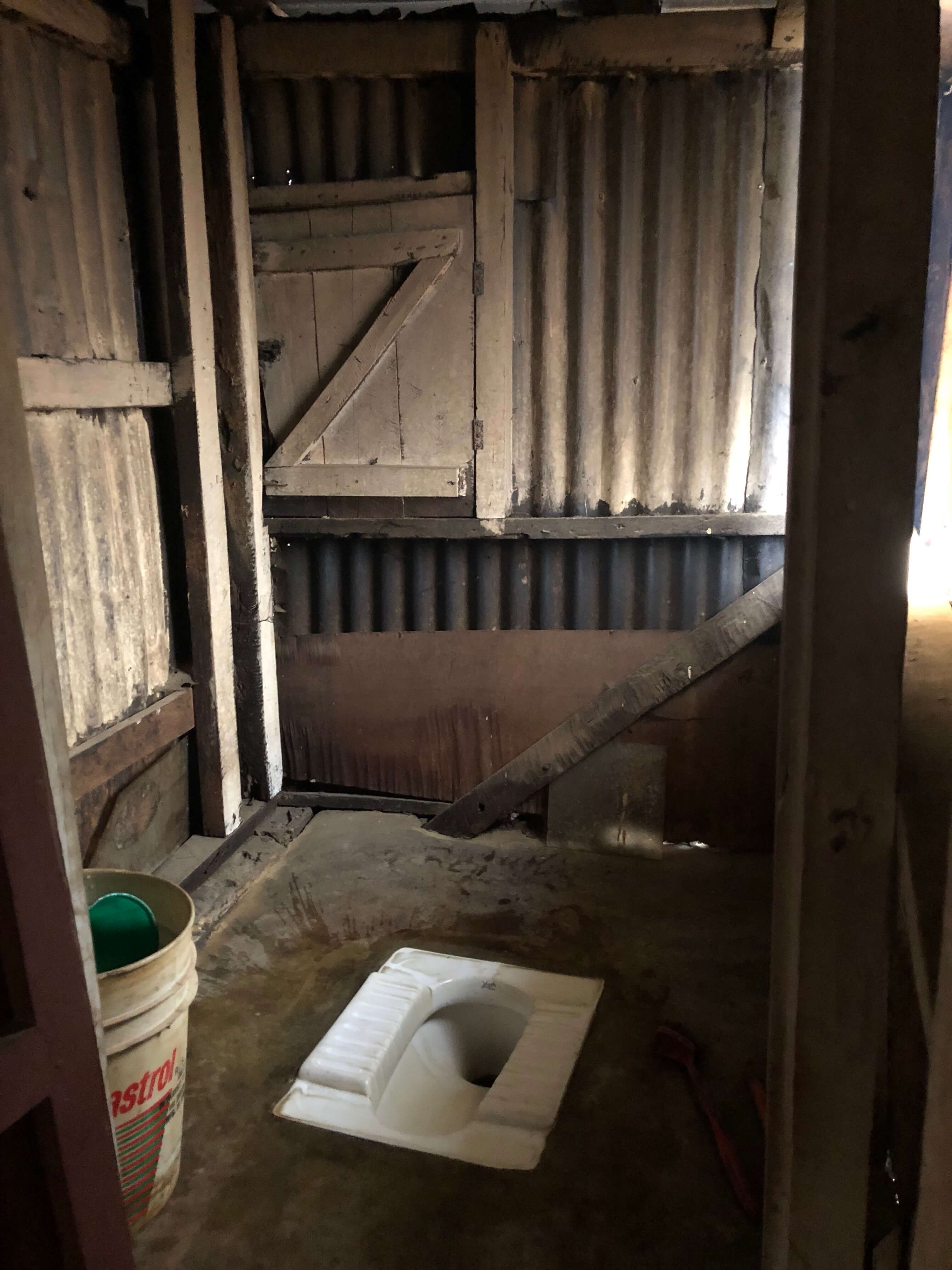 Say goodbye to flushing toilets and bring your own toilet paper.

We are officially totally culturally immersed. Our food was cooked in a store that also seemed to be a home. They whipped up one of two choices; chow mein or a noodle and veggie soup called thukpa. It was just $6 for all five of us to eat including drinks. Just crazy! 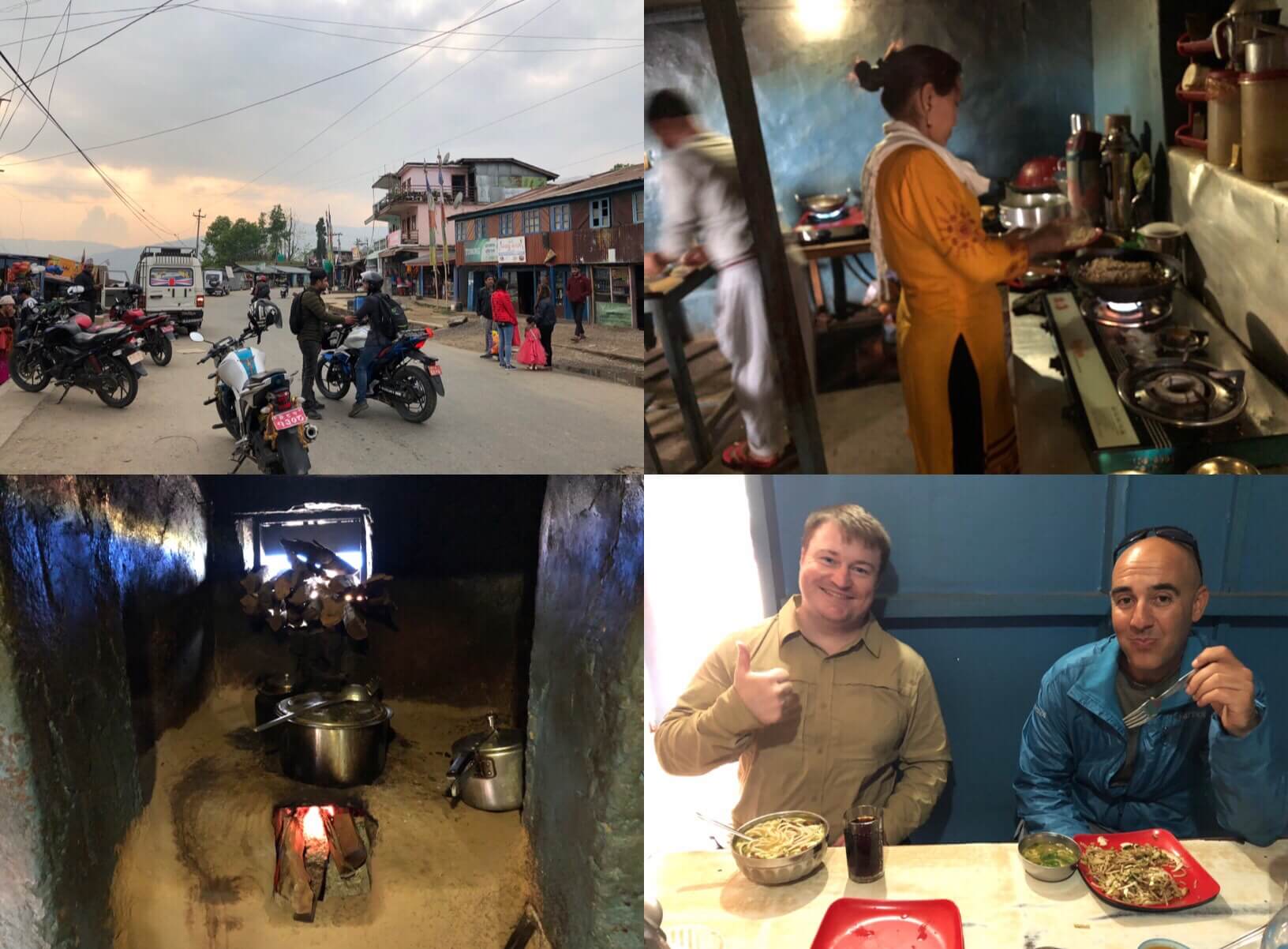 We got back in the car for another two hour chunk, and I really wanted to sleep. Not sure if it was my stomach or the Dramamine or the jet lag. Because of space, I was in the back and had let Griggs take the front for today. I don’t think that had such an impact on what I was feeling and think it’s more of a digestive issue. It got pretty bad, and I managed to hang on until we stopped in Phidim. I was spinning and my stomach was cramping. I basically peed out my ass as soon as I found a bathroom. Let me add that toilet paper is not a thing out here in the more remote areas. I brought a generous amount of toilet paper for the next month, but am plowing through it now. This will be interesting. The way it works is that there are buckets of water in the bathrooms next to a hole in the ground that you squat down to use. If you poop, I guess the locals use their left hand and the water to somehow wash off. Then you scoop water from the bucket and “flush” it down the hole. I can’t even begin to explain how difficult it is to squat while you’re weak and your head is spinning. Especially with diarrhea. I found the crab position best for getting as low as possible to avoid splashing all over myself. Really, so terrible.

I was spinning so much that the guys assessed the rooms and I was able to get one to myself with a bathroom for just $6, amazing!. It was about 7:40pm when we arrived. I was really depleted and peeing out my butt every 20mins. I crashed and woke up around 10:30pm with more diarrhea and threw up a ton. Then again at midnight. By 2am, the cramping started to lessen and I was able to take in fluids without spitting it back up. I took Imodium (thankfully I brought!) and it helped quell some of the diarrhea. I also had a rehydration salt packet that came with a prescription I have for real serous giardia. I slept, blogged, and drank and got it down little by little. 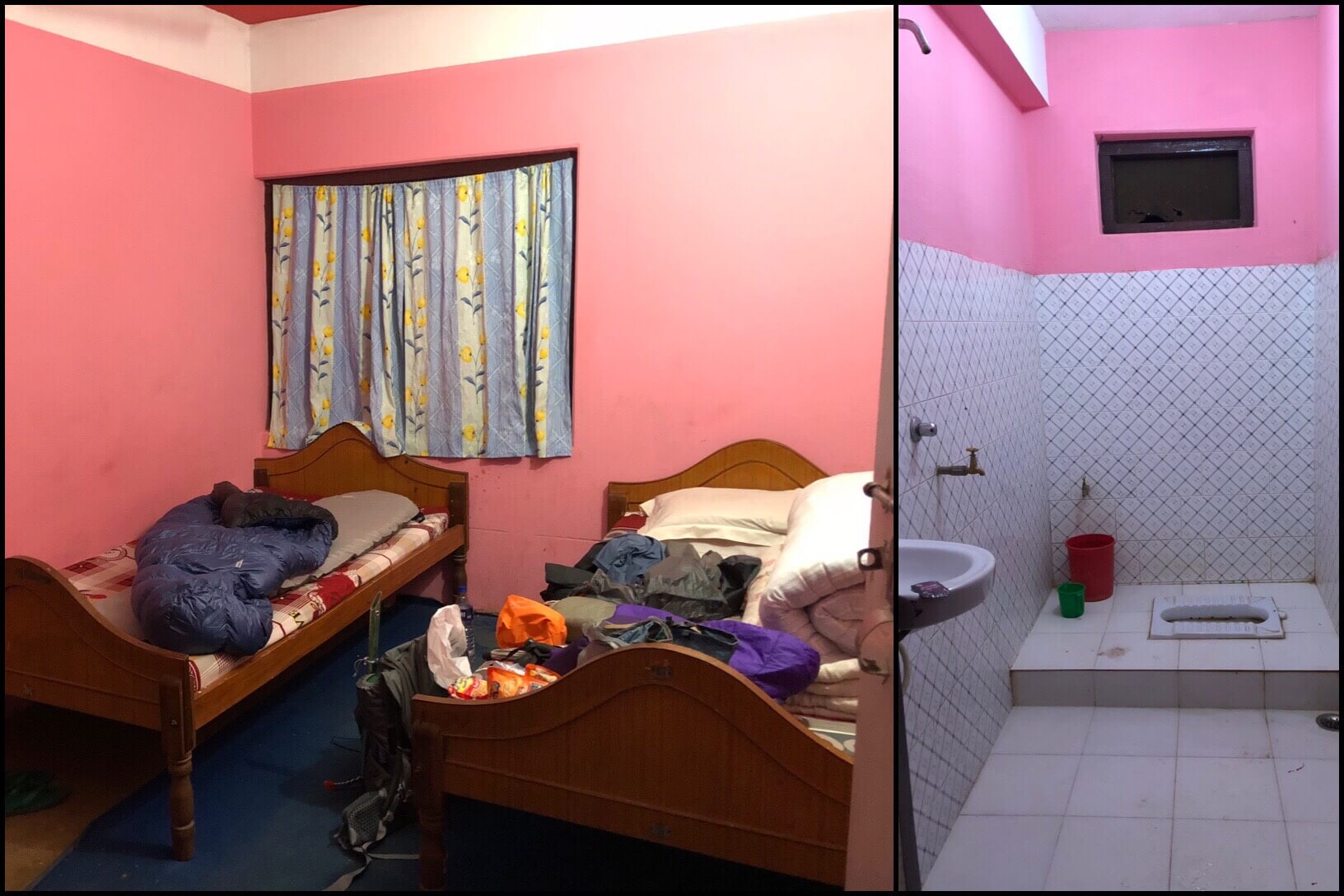 My room and bathroom.

Still though, some of it is going right through me. It’s like my anus has become by urethra. Totally clear liquid just going right through. It’s 5:30am now and I’m going to finish getting the full liter of electrolytes down and attempt to eat. I’m super weak and spinning a bit, but the goal is to assess if I can do another 3hrs of riding in the car on super windy roads in the front seat. Then we hit Taplejung and we can assess if walking is doable. I do sense that I’m rebounding and was told this exact thing would happen throughout the trip. You’ll spend a night vomiting and having diarrhea and then wake up and walk it off. Plus, an extremely high percentage of those that start the trail start it with similar digestive issues. It’s just part of the challenge out here and you just have to assess where your boundary is. Ok, we will see what happens…I’m not intentionally leaving a cliffhanger, but I really need to post this and get packed up to go and try to eat. Again, you can check the “Where’s Wired” tab up at the top of the blog to see movement (or no movement) each day. It now may be weeks before the next post. To be continued…