Welp, the title says it all. It rained on and off steadily all night and into the morning. We only had maybe 6-7hrs of hiking to do, but we wanted to get an early enough start to hopefully be in our tents by the time the afternoon rain/snow might move in. The plan was to hike up 4,000ft/1219m to be well positioned to go up and over our highest point yet, the challenging and somewhat intimidating Lhumbha Sambha Pass at 16,926ft/5159m. However, our planned campsite was over 14,000ft/4267m. When put in terms US hikers would relate to, we decided it would be a terrible idea to go camp up on Mt Whitney when weather down near the portal was already socked in and raining. Plus, you have no way of obtaining a weather forecast, but weather is consistently even worse in the afternoons than the morning. Especially knowing the next day would be going over a very challenging pass thousands of feet higher.

The bummer is that Kishor had to leave this morning regardless. He has another guiding job to get back to Kathmandu for. He did get our permits signed yesterday to approve us for the checkpoint at the end of town, but technically, the restricted area is the top of the pass. The plan was for us to walk through early before the checkpoint opened and Kishor would walk with us a bit to make sure there wasn’t a problem. He said regardless of when we walk through, they shouldn’t question it, and our signed permits would be sufficient. I guess we will find out tomorrow. So, it was a cold and rainy goodbye to Kishor! We had a good time with him. Anyone interested in hiring him, here’s his contact email. He’s especially great for those with more of a thru-hiking mentality of longer days. 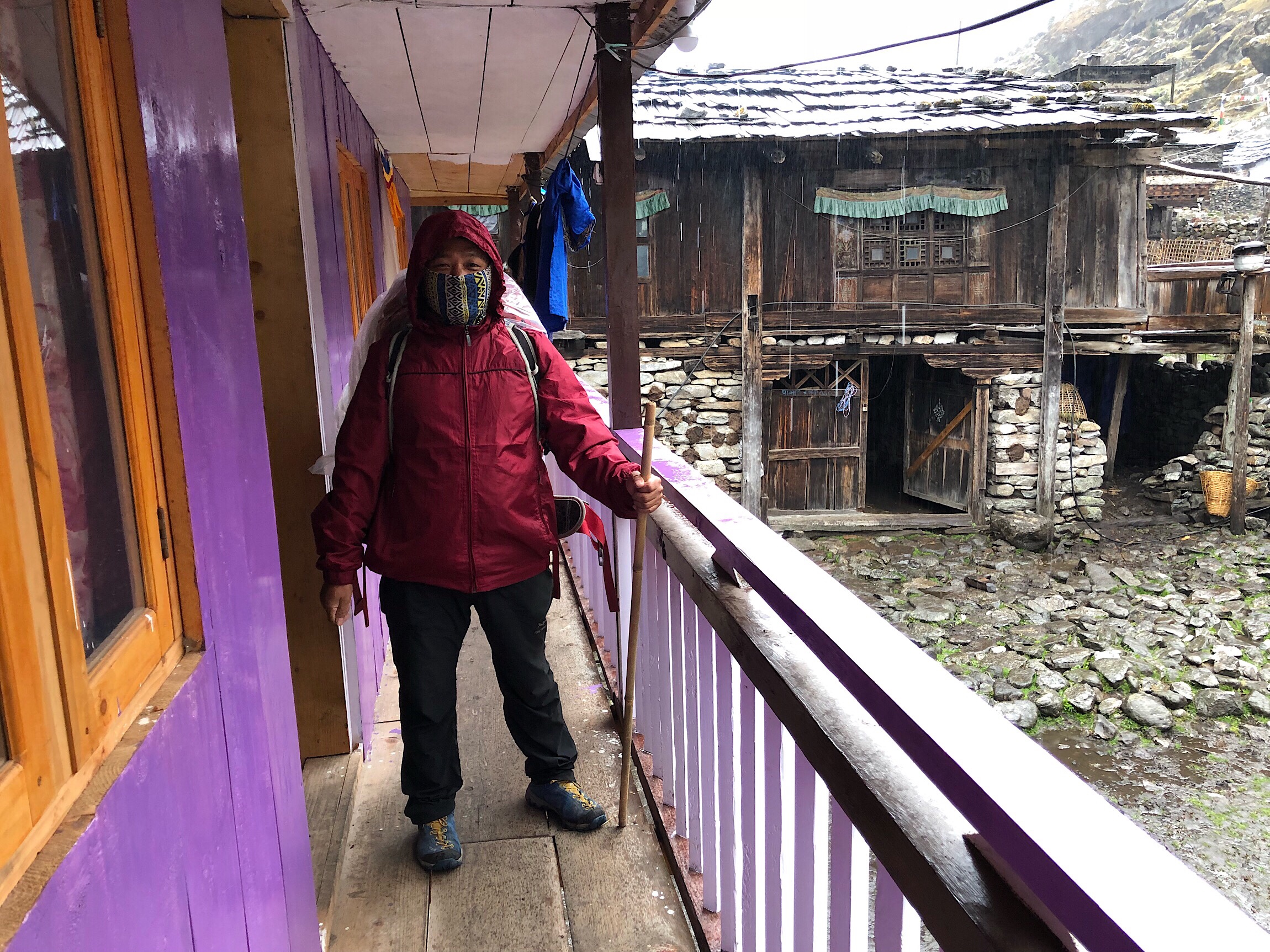 We waited until about 9am before calling it officially. It could be frustrating because we really are on a tight schedule with little wiggle room, but I’m just of the mindset that I have three months and whatever we get to see is fine. It’s not worth putting myself in dangerous or extreme discomfort to keep a schedule. I knew this trip would have many factors I can’t control, and weather is a major one. Buck-30 is coming around more to this perspective, and it does help to reduce the stress when you just accept that you can only do so much. This is for sure a different kind of trail, and it’s very possible that this one may not be completed.

Buck-30 and I have done many trails, and tend to keep very detailed journals. We have talked about how that can add pressure to someone to feel obligations to do things they might otherwise not do. Like hiking on out today when it would be very uncomfortable and possibly dangerous. We don’t know what it is, but both of us really don’t feel strongly pushed by public opinion. What we are doing is real, and people get that. We aren’t trying to be superhuman or push beyond our limits just because people are watching. It’s going to be what it is, and that’s just the nature of the GHT. Few are able to complete it in one season, so you just do what you can.

Once we decided to stay, we knew we’d be able to charge our batteries (when electricity came on after 4pm) and started using our devices. Buck-30 has shows to watch, and I spent two hours messaging back home to my good friend Julie through my inReach. It was evening in Portland, and we both have the unlimited messaging for these months I’m in Nepal. It’s been great for being in touch with home and my family as well. It’s especially nice to be able to keep everyone close to me informed on what’s going on. 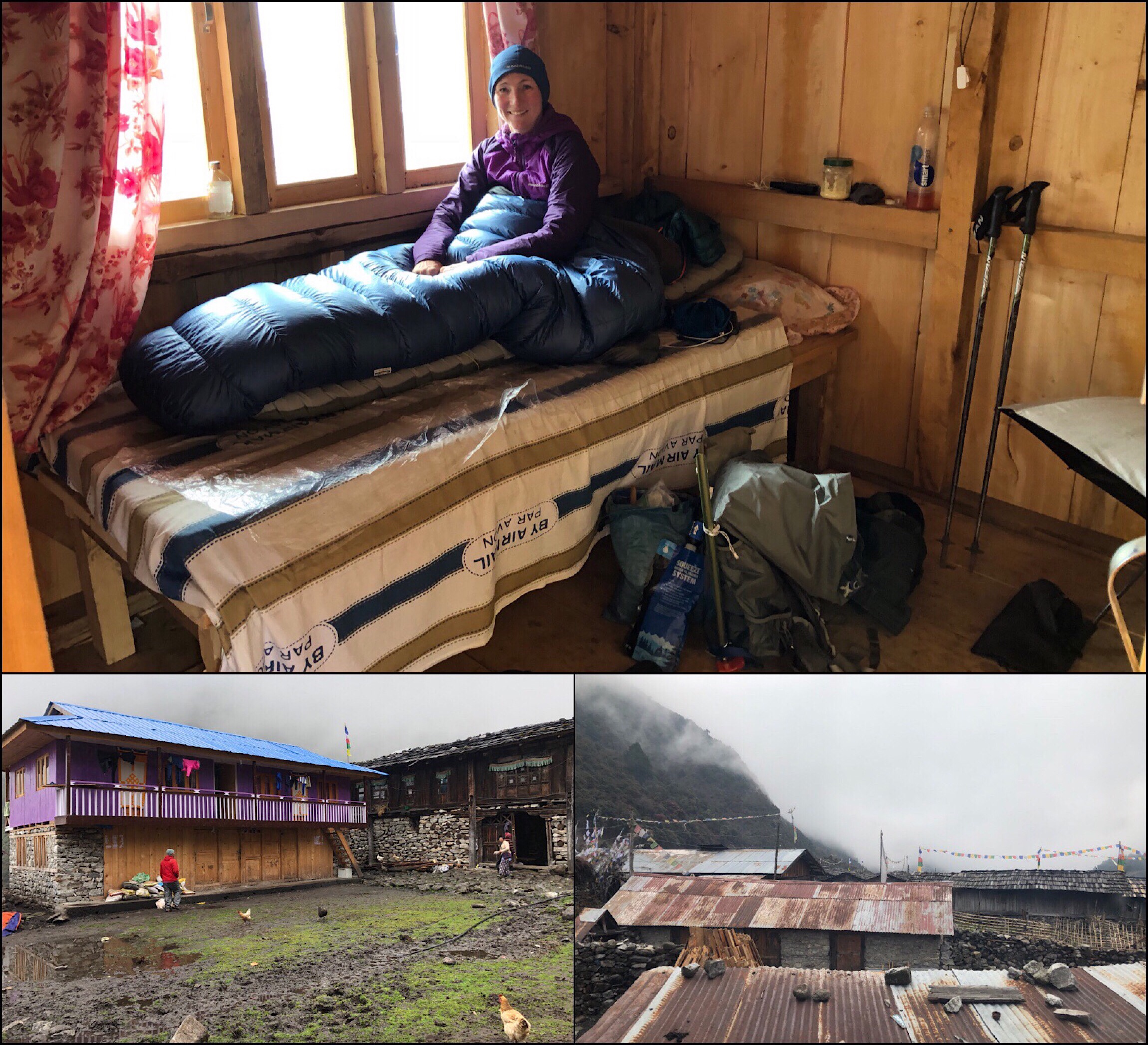 After that downtime, we had a big serving of veggie fried rice for lunch. After lunch, we walked up above the village to visit the monastery that the map says is 465yrs old. The 14yr old daughter where we are staying got the wife of a lama to come up and open the monastery for us. 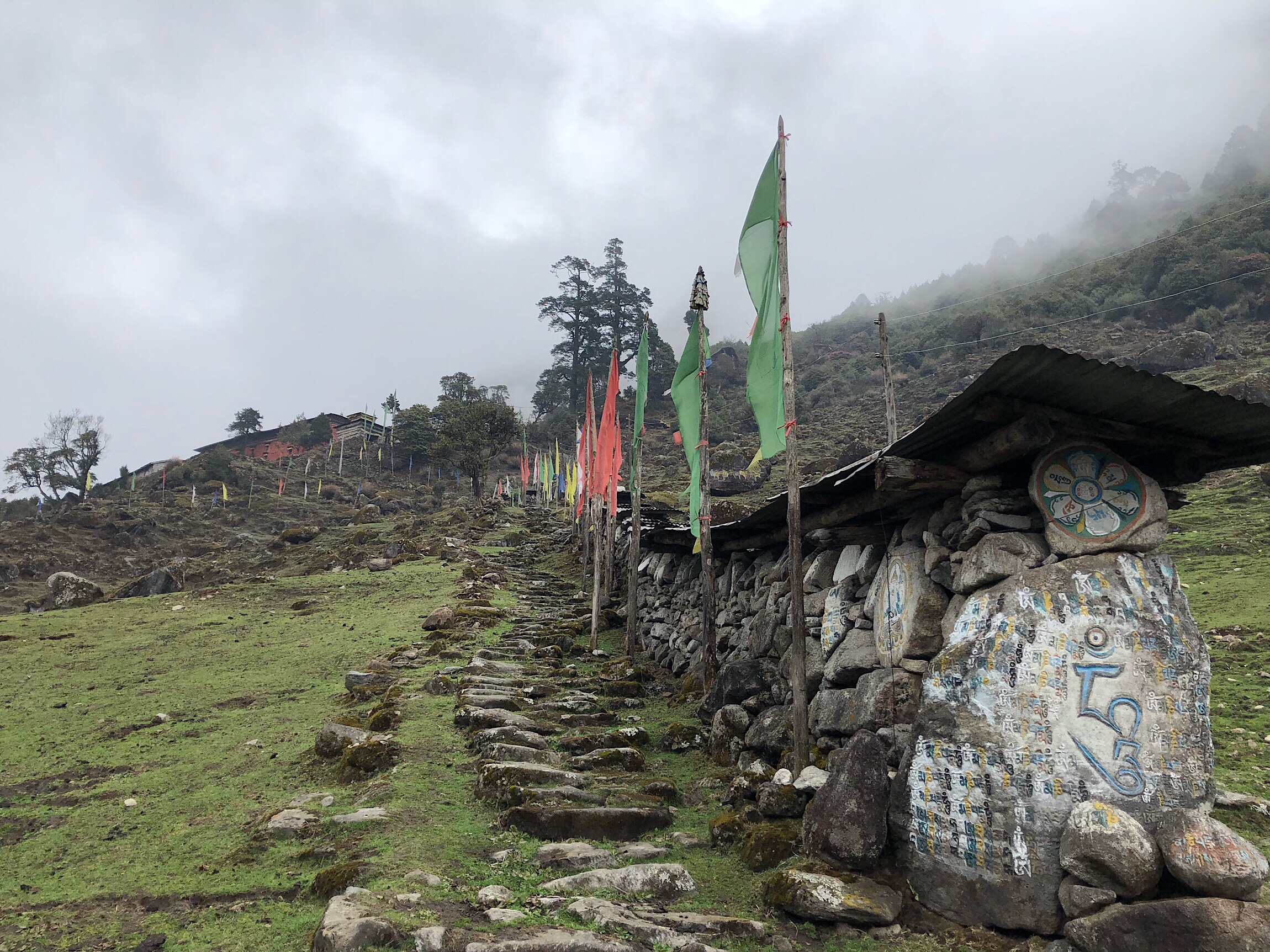 Flags leading the way up to the monastery.

There was just a small space that is the core of the monastery, and we were given the tour. It was surely rustic and aged. There is a more used monastery in the village. We were not allowed to take photos inside the monastery. Outside were cylindrical columns around the whole building that the woman spun as she walked around the whole building to the entrance. They said it was to endure a long healthy life for the husband.

We were given candles to light and a string from a tassel hanging in the monastery. It was a nice cultural experience. I’m sure not as grand as the more touristy monasteries, but very authentic and historic.

View looking down on Olangchun Gola.

We got back and laid down a bit and a pair of women hikers from Germany arrived with a guide. They are sort of doing some of the GHT for 26 days. They will take a rest day tomorrow and will head the way we are the day after we leave. They were nice, and it was enjoyable to have conversation at dinner. They have solar electricity that goes on from 6-10pm in the village each night. They get satellite TV, and we got to watch CNN for a bit to get some news. It was pretty unreal to be in such a remote and seemingly disconnected place, yet get CNN news. We paid our bill tonight since our plan is to leave early and not have a formal breakfast in the morning. This place was the best deal yet! Two nights and five meals each for just $15 each. Nice!