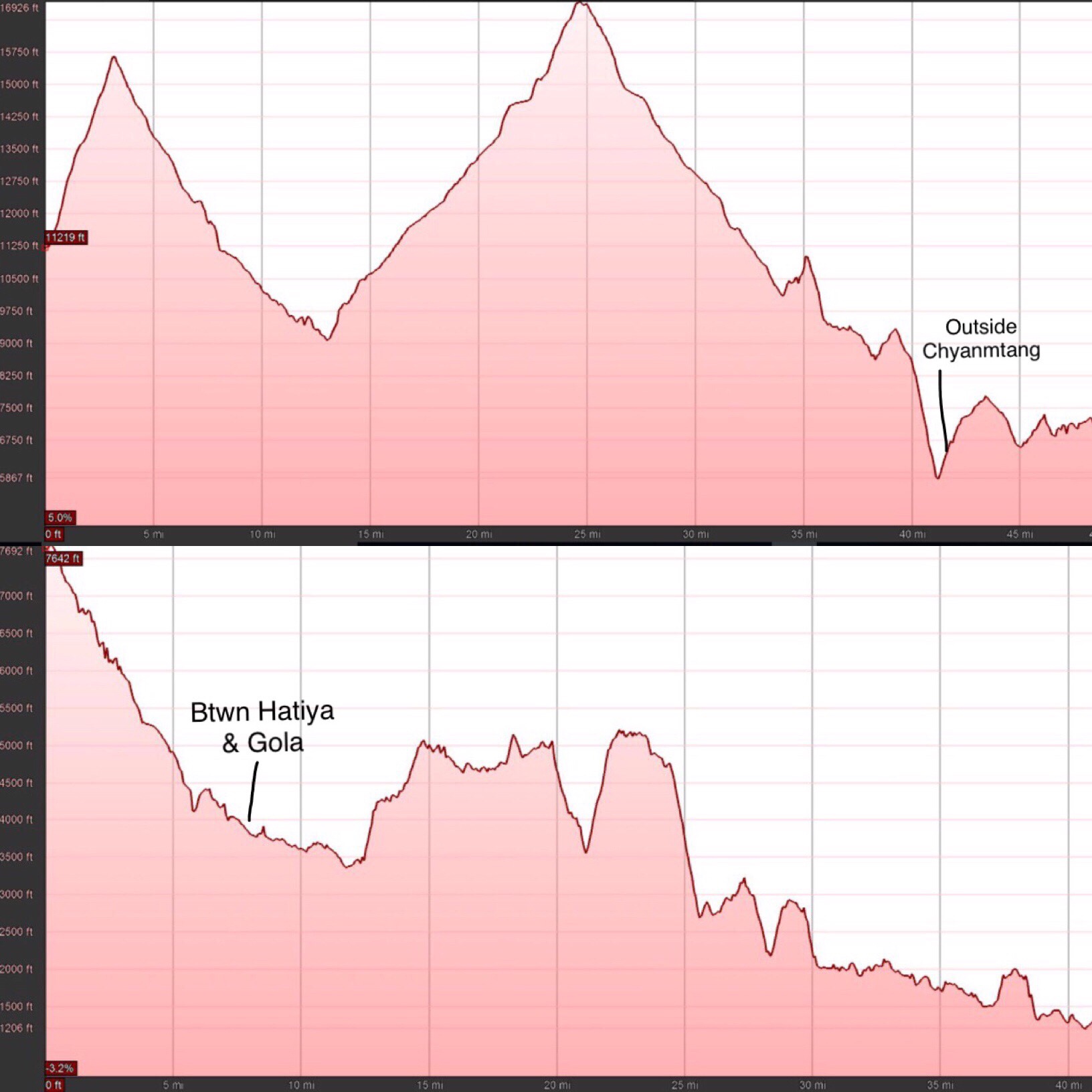 A quick story from last night. I woke in the middle of the night to pee. When I got back in my tent, I had a leech crawling on my hand. It freaked me out, especially in the dark, and I reflexively shook my hand sending it flying in my tent somewhere. No! I found it on my sleeping bag and got it out. We knew the leeches existed oh the lower routes, and I’m sure the rain brings them out. Eww.

After yesterday’s slow progress, we decided to go with hiking by 6am. It gives us more time to hike, allows for more of a buffer if something goes awry, and gets more miles in before the afternoon rains. We woke to overcast skies that thankfully stayed all day without precipitation. 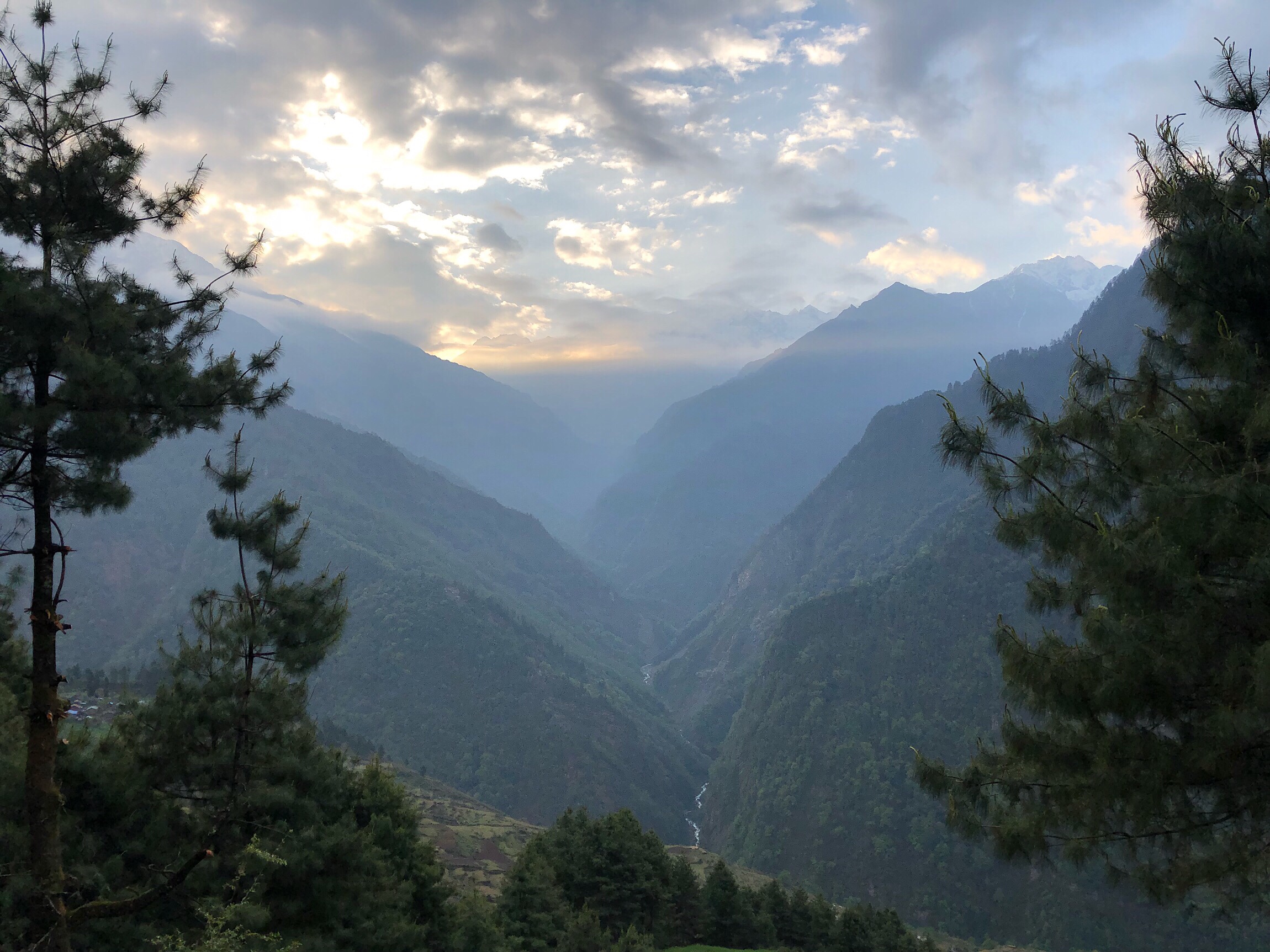 The guidebook remarks about the great quality of the trail for the 8mi/13km from Chyanmtang to Hongon, and we had hope of lunch in Hongon. Normally, 8mi before lunch would be a no brainer with such an early start, but we struggle to make even 10mi in a day out here. Thankfully, we did get the reprieve we needed, and the trail was pretty wonderful! 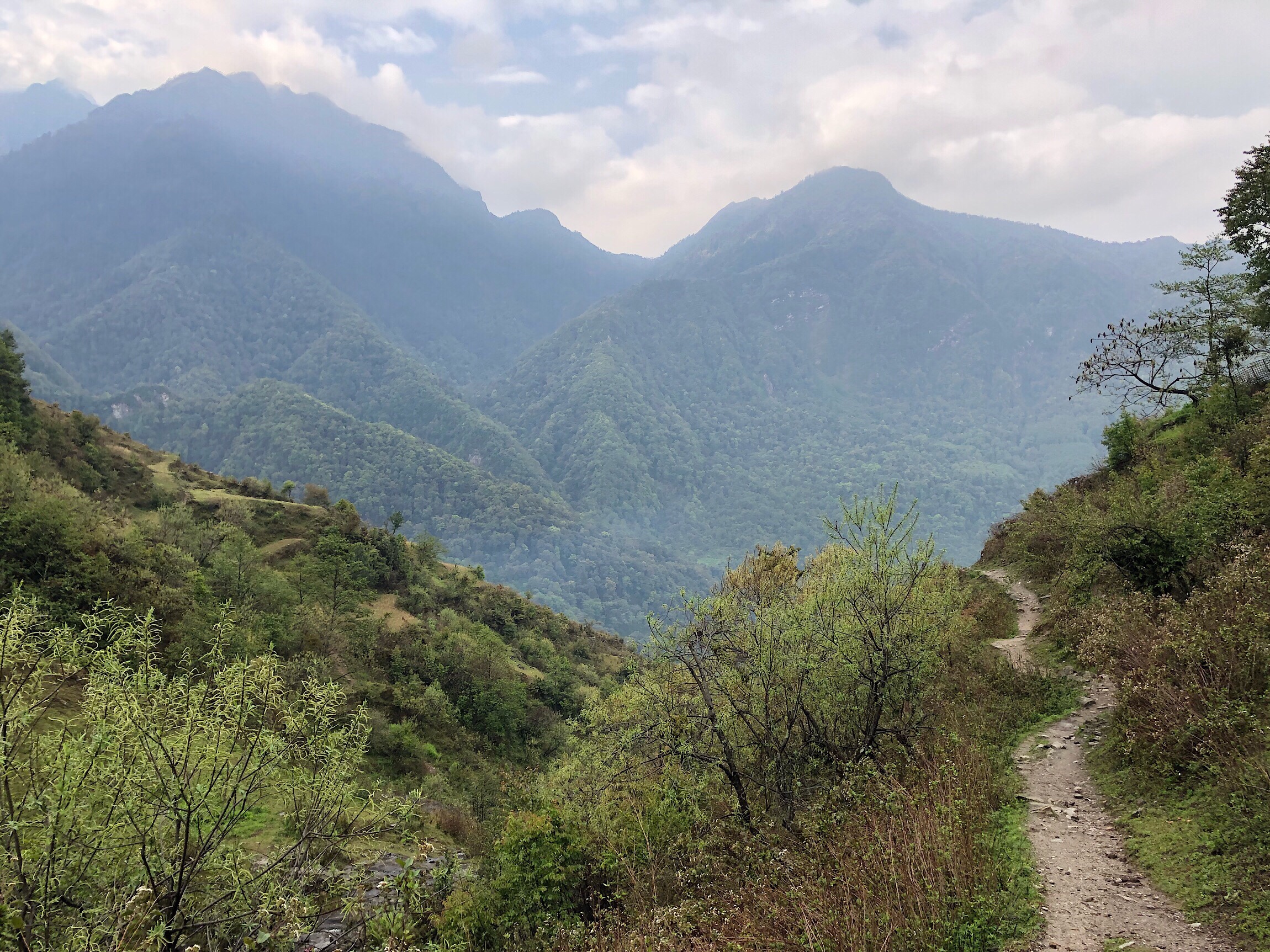 The grade was more gradual, and felt like we were on the Pacific Crest Trail at times. Just cruising! We kept checking the GPS to make sure we were in the right place because it was too good to be true. It also gave my thigh muscle a bit of a break, and it had the best morning so far. Hopefully, it’s going to find some way to heal as I walk because we don’t have another planned day off until Lukla in another week. We need to average 12-13mi/day to make it to Lukla the day we’d like. That seems so simple sitting at home that a full day’s effort would get you that far, but out here, we are really questioning it. We know it won’t be easy. The trail to Hongon was a good morale boost, that’s for sure. A random note, Buck-30 got the first official attached leech on his leg this morning. Those suckers are a bit longer and stronger than the ones I experienced in Tasmania. Yuck!

Along the way, we passed through the small village of Chepuwa. Walking through these villages is pretty cool. Just to see the daily happenings. It can be like a maze at times to wind through to the other side, but the locals point the way, and you figure it out. It does again help that we have a GPS track from our friend David, who did this last year. We still managed to take the wrong fork too low into Chepuwa, that led to a dead end and had to backtrack, but not too far. A mute man grunting and pointing for us ended up being right, and we felt bad for ignoring him the first time around. 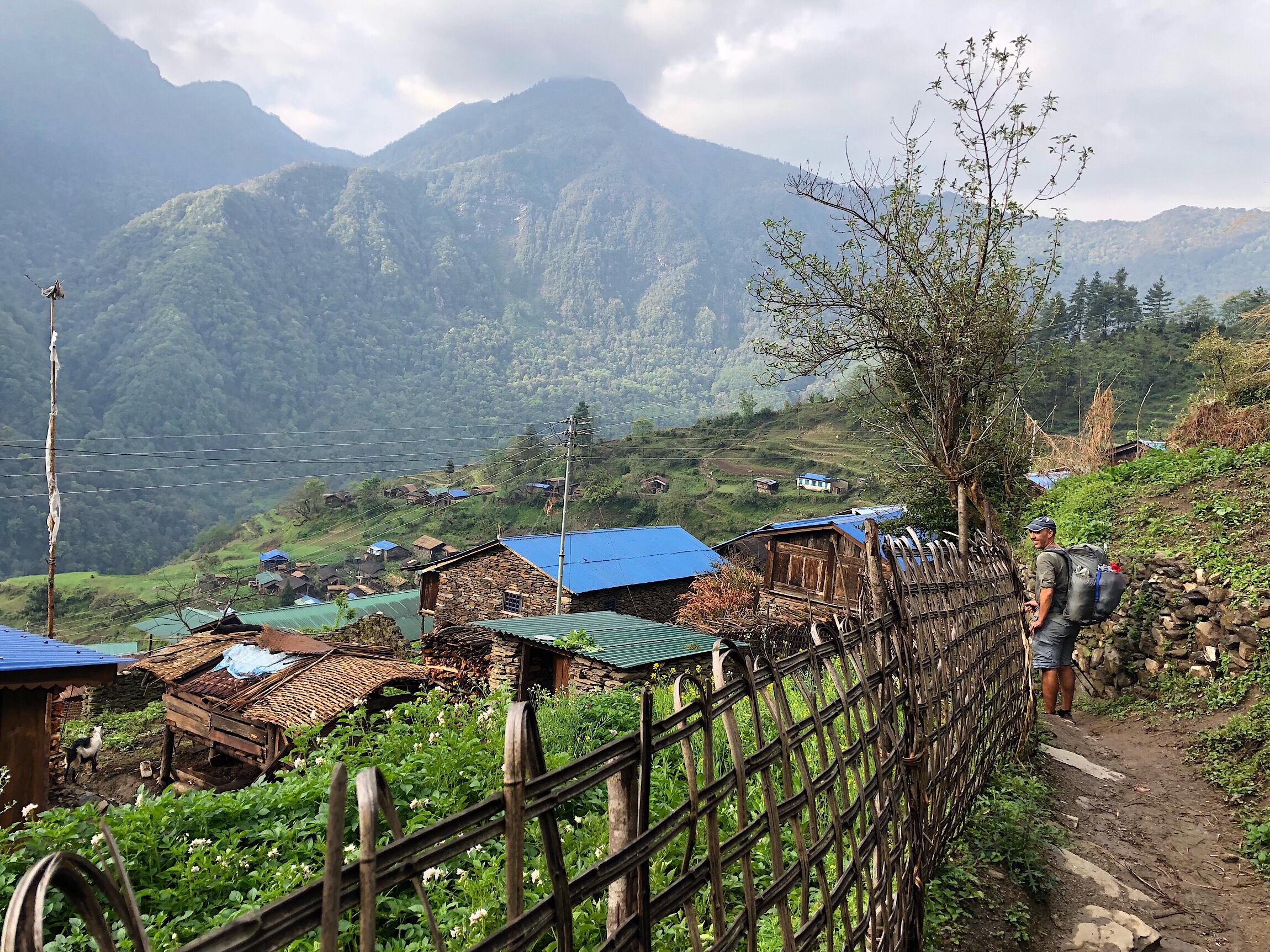 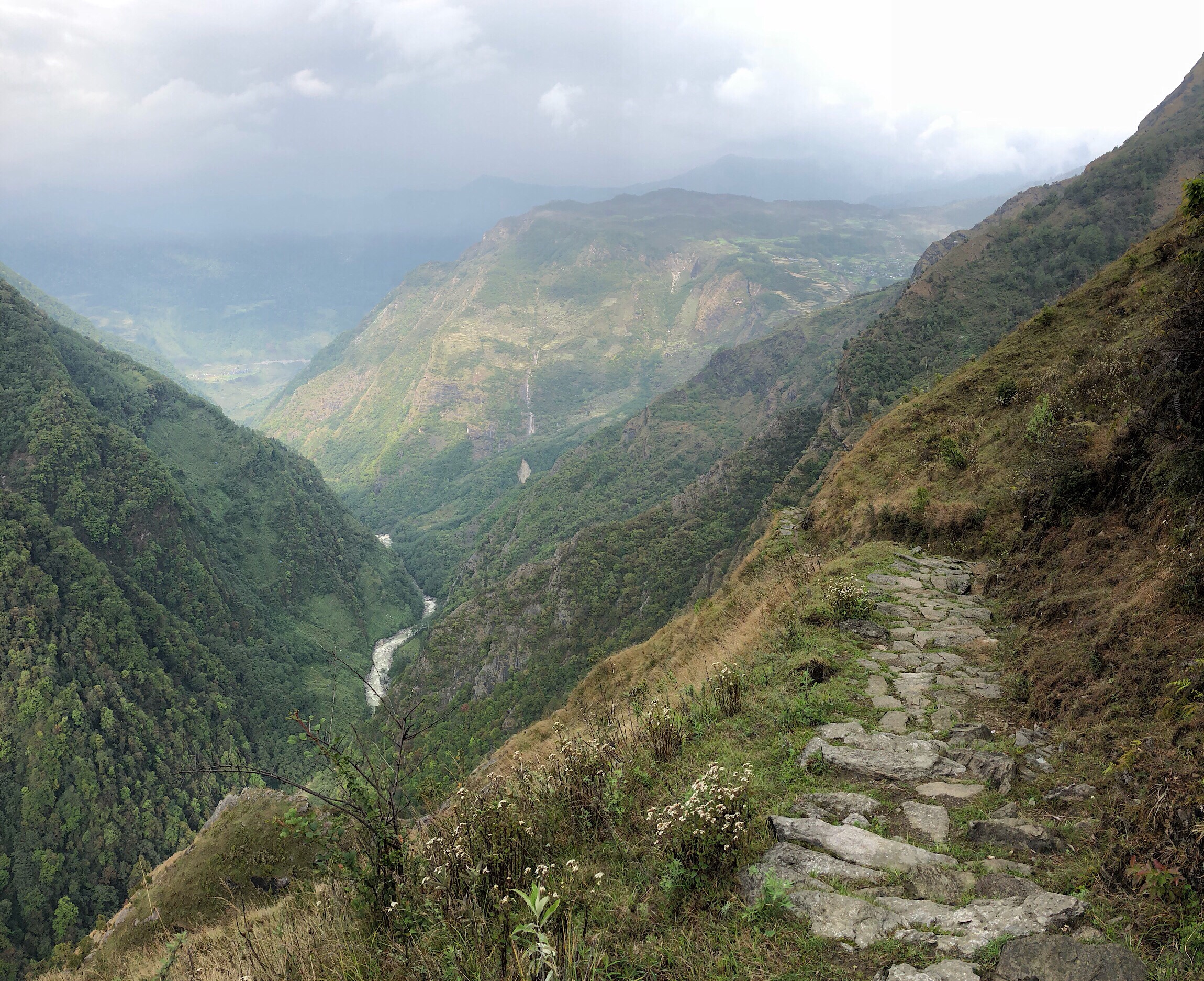 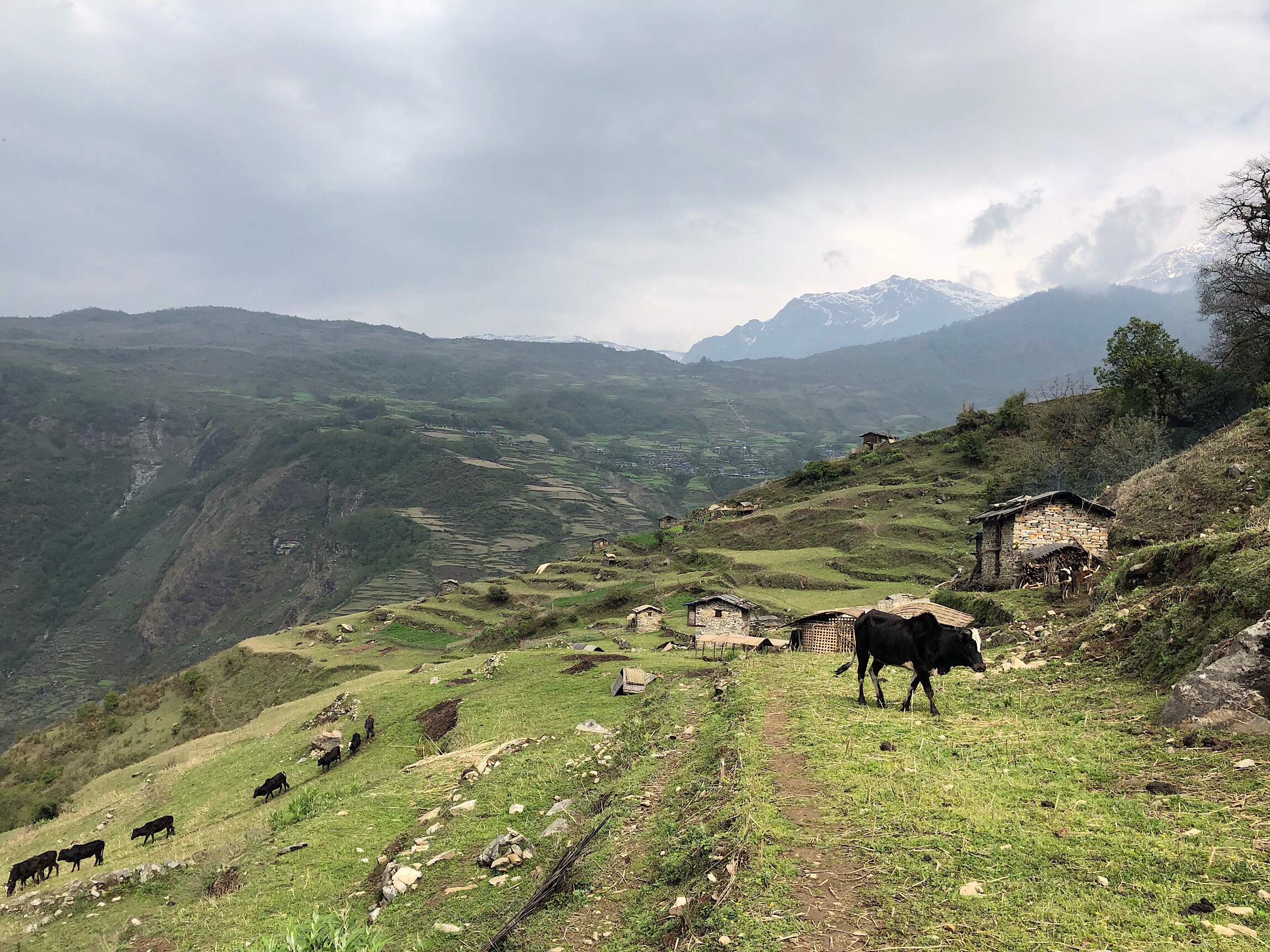 We arrived in Hongon around 10am. We did about 7mi by 10am! We found the spot that seemed to be the main teahouse for food and lodging with the help of a local. Not having Kishor to translate anymore, we get to play charades with locals who fortunately are accustomed to hikers coming through. It’s just that most hikers have guides and porters it seems. A man yelled up a hill and indicated that someone would be coming down. We didn’t know if that meant in a few minutes or in an hour. As we sat, a small herd of kids gathered and just stared at us. A woman arrived, and was very welcoming. The place is called the Yangla Hotel and Lodge, and seems to be where people stay in Hongon. The woman knew a fair amount of English, and was very cheerful. She made us veggie fried rice while we got to plug in our electronics to charge off her solar power. We were worried about how often we’d be able to charge these two weeks, and it doesn’t seem to be a problem. 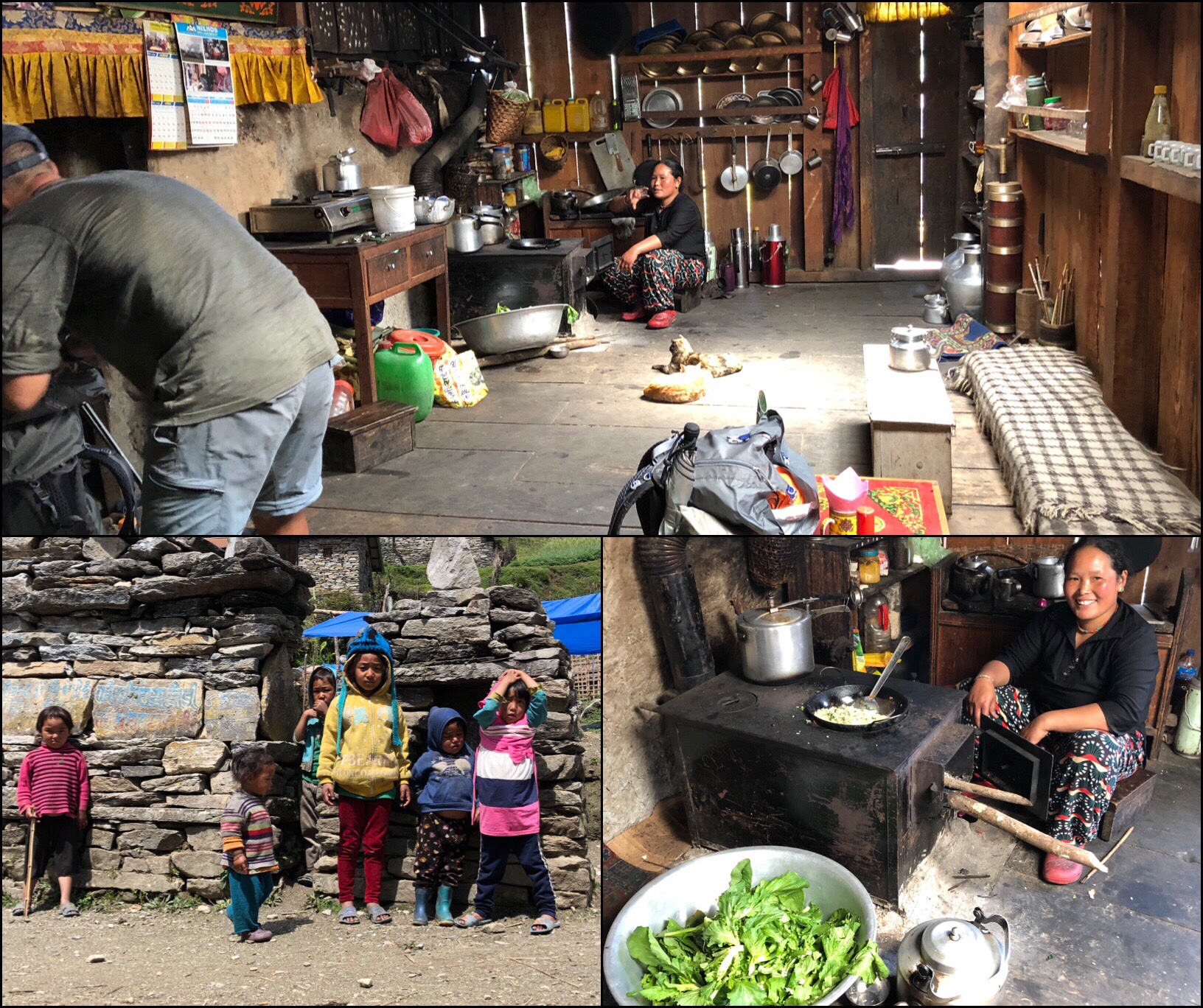 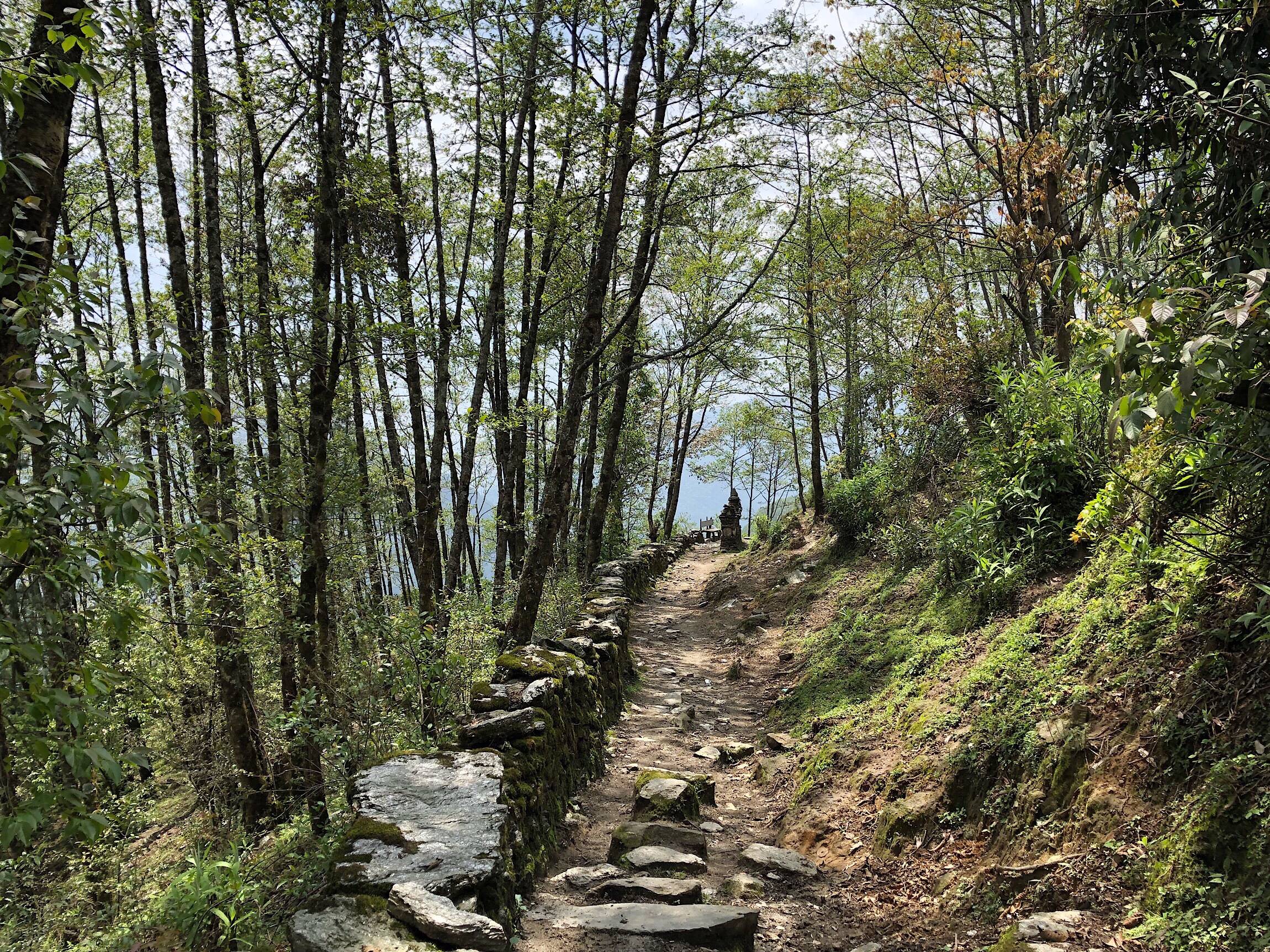 A random note, that my skin usually takes time to adjust each year to being outside. I’ve had this issue at the start of summer all my life. I found out last year, that it’s not harmful, and is called Polymorphic Light Eruption. It’s just an adjustment of my skin to the sunlight, regardless of sunscreen, and isn’t a burn or factor in skin cancer. So far, just my hands are reacting, but it’s quite annoying. Just super itchy and burns if you rub it at all. I do my best not to scratch them! Hoping it will go away in a week or so once my body adjusts. 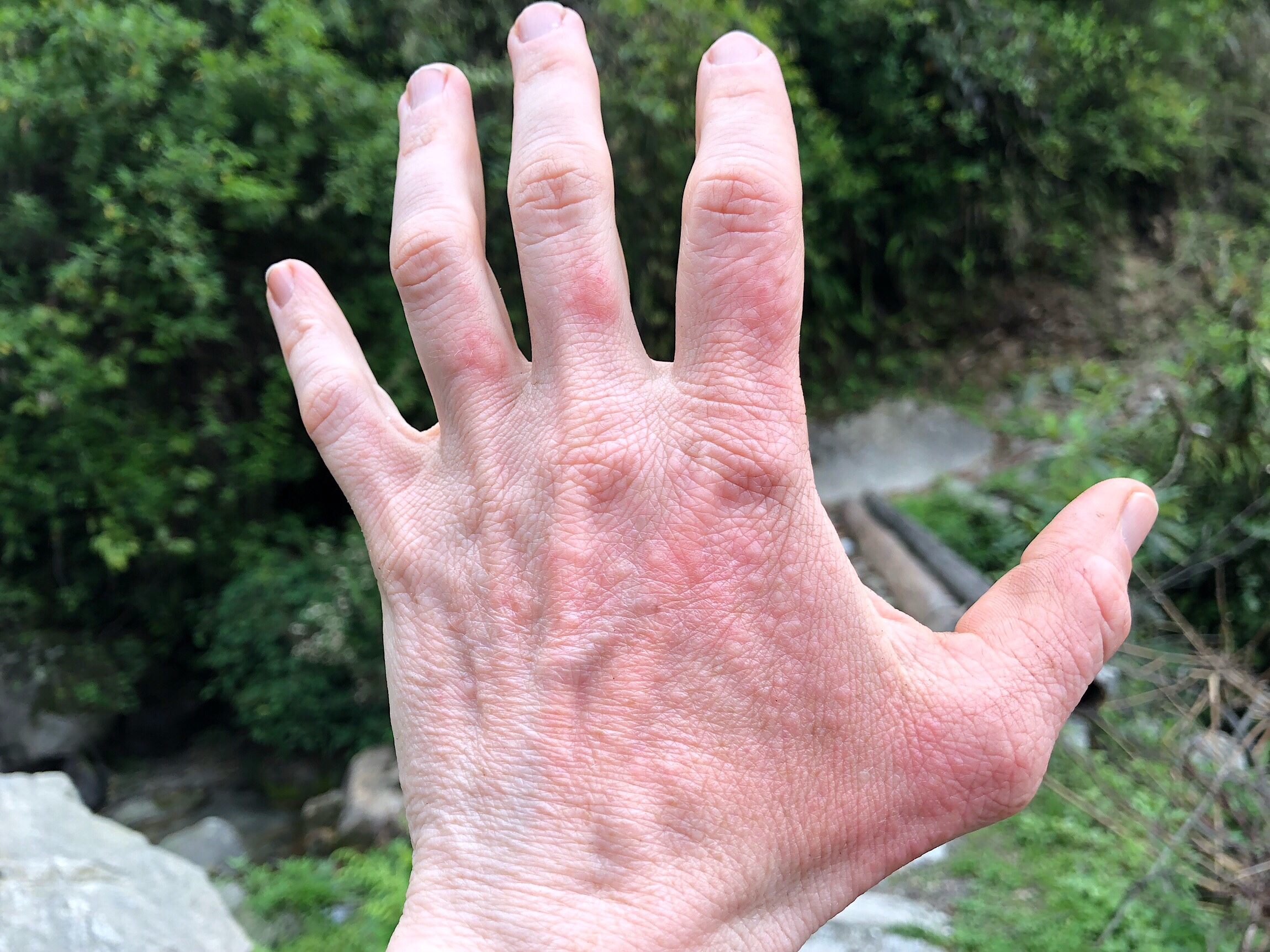 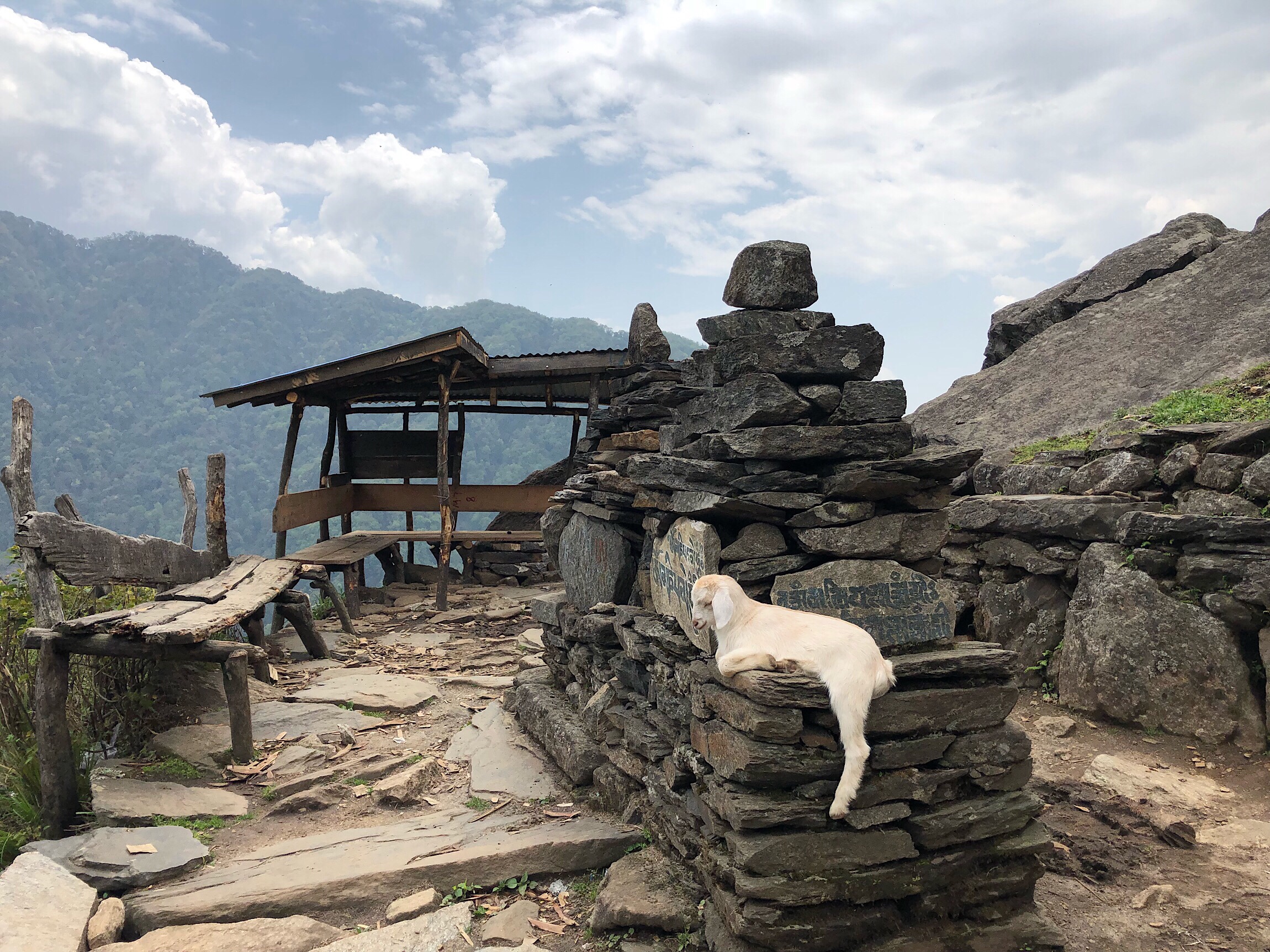 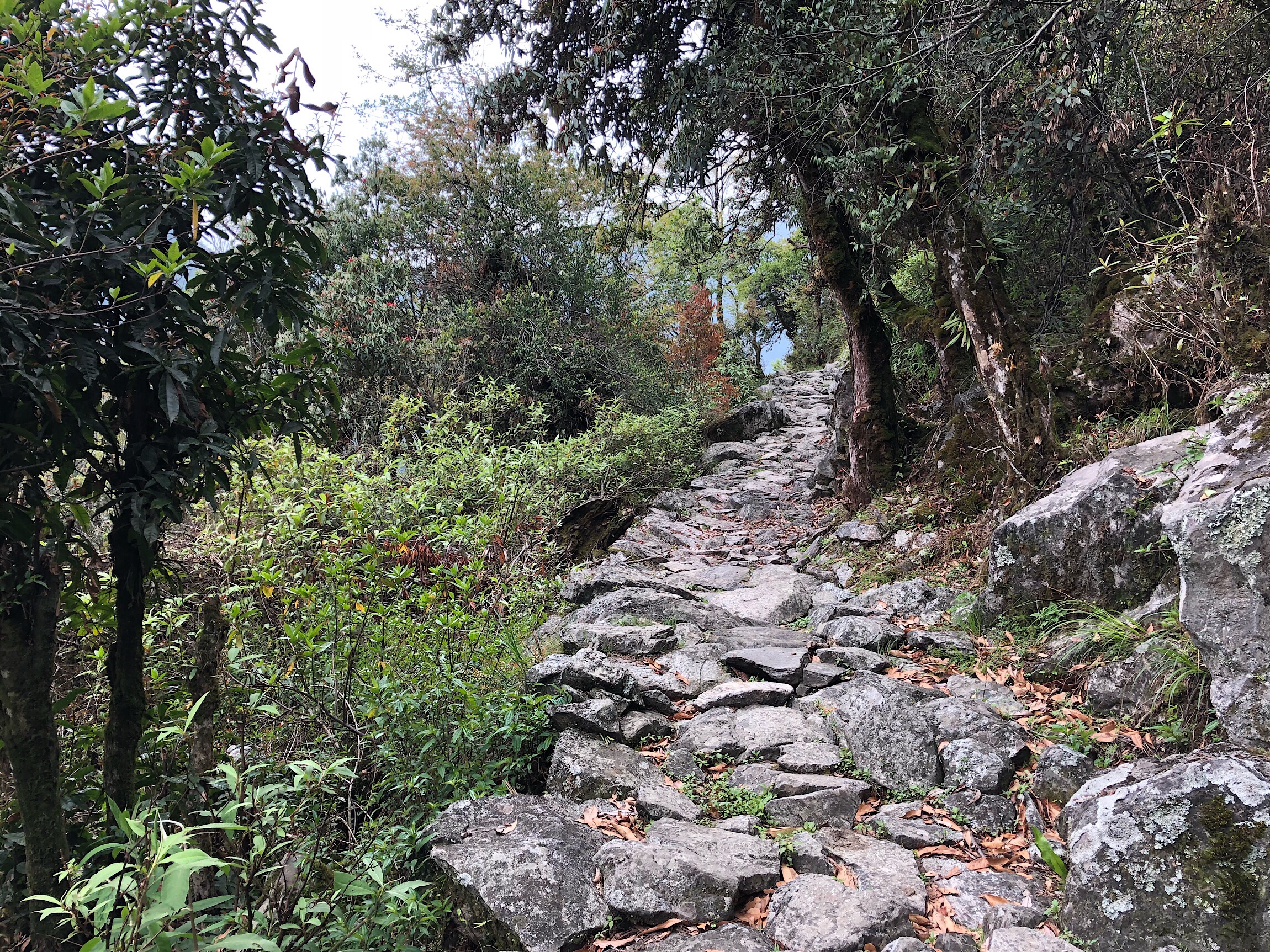 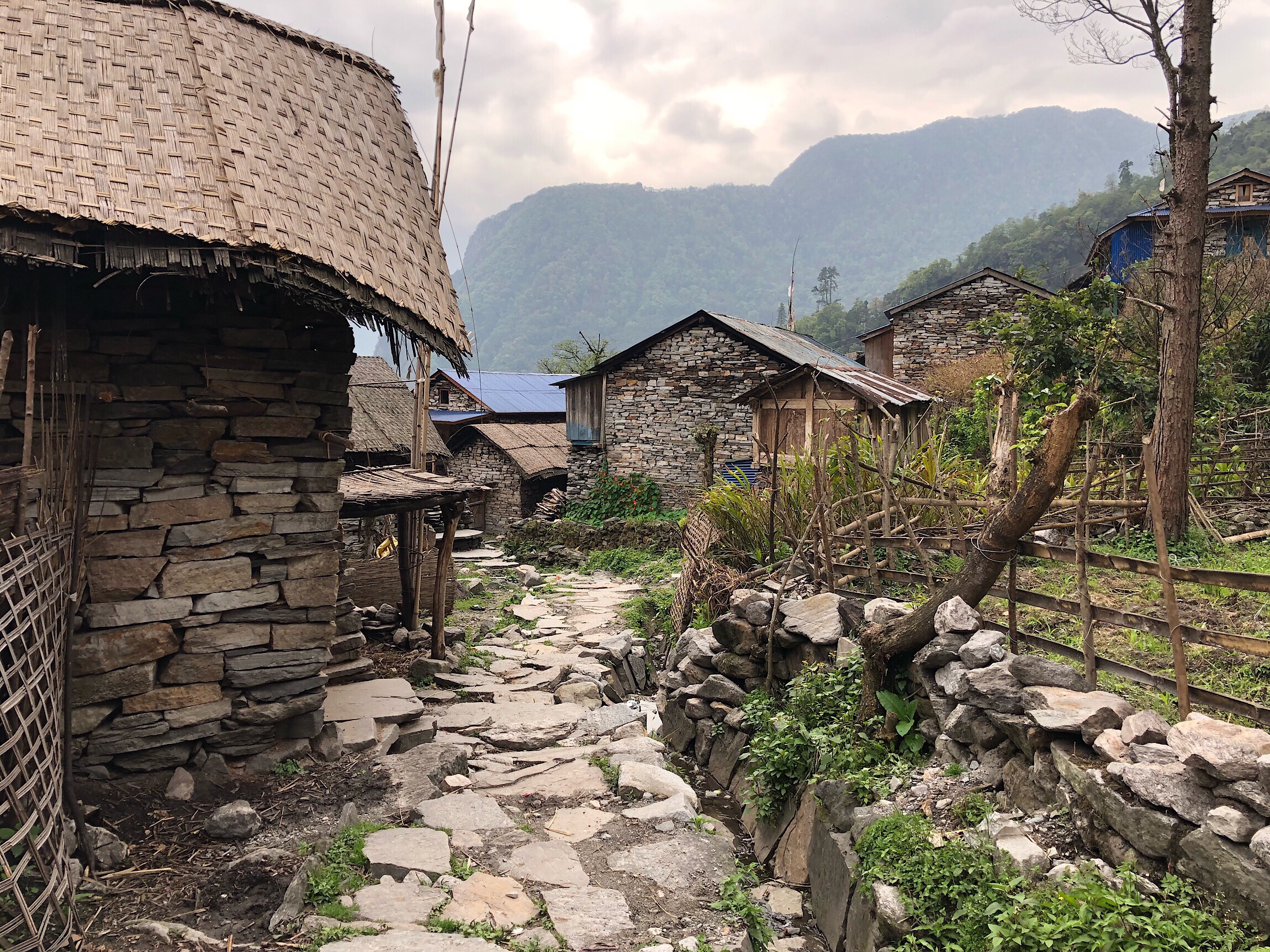 It was still early enough for us to get further than we planned, but the base maps on both our GPS were funky. It was looking like we had an insane climb, but that a stream was going strangely over a hill. Something was wrong, and we needed to decide if we would just go for it not knowing at all what we were headed into or play it safe. It was so early that we decided to go for it. At first we loaded up on water for camping up top if it was a steep climb, but then realized what the trail was doing and got rid of it. It was just following the river undulating up and down high above it. Whew, no huge climb! 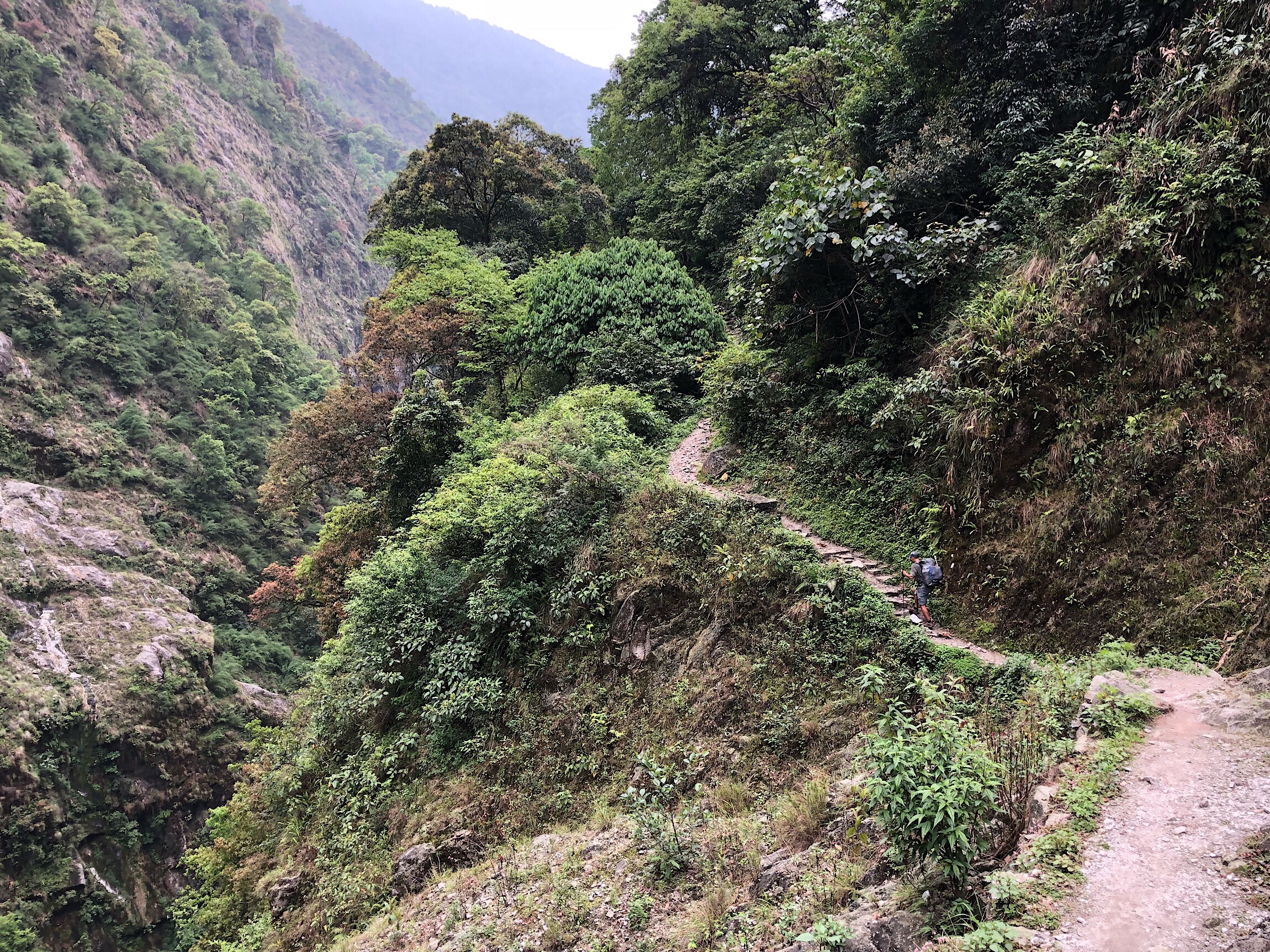 We did have a ton of mule trains to wait for. We haven’t seen animals used much as pack animals, and they had quite the operation running along this river. 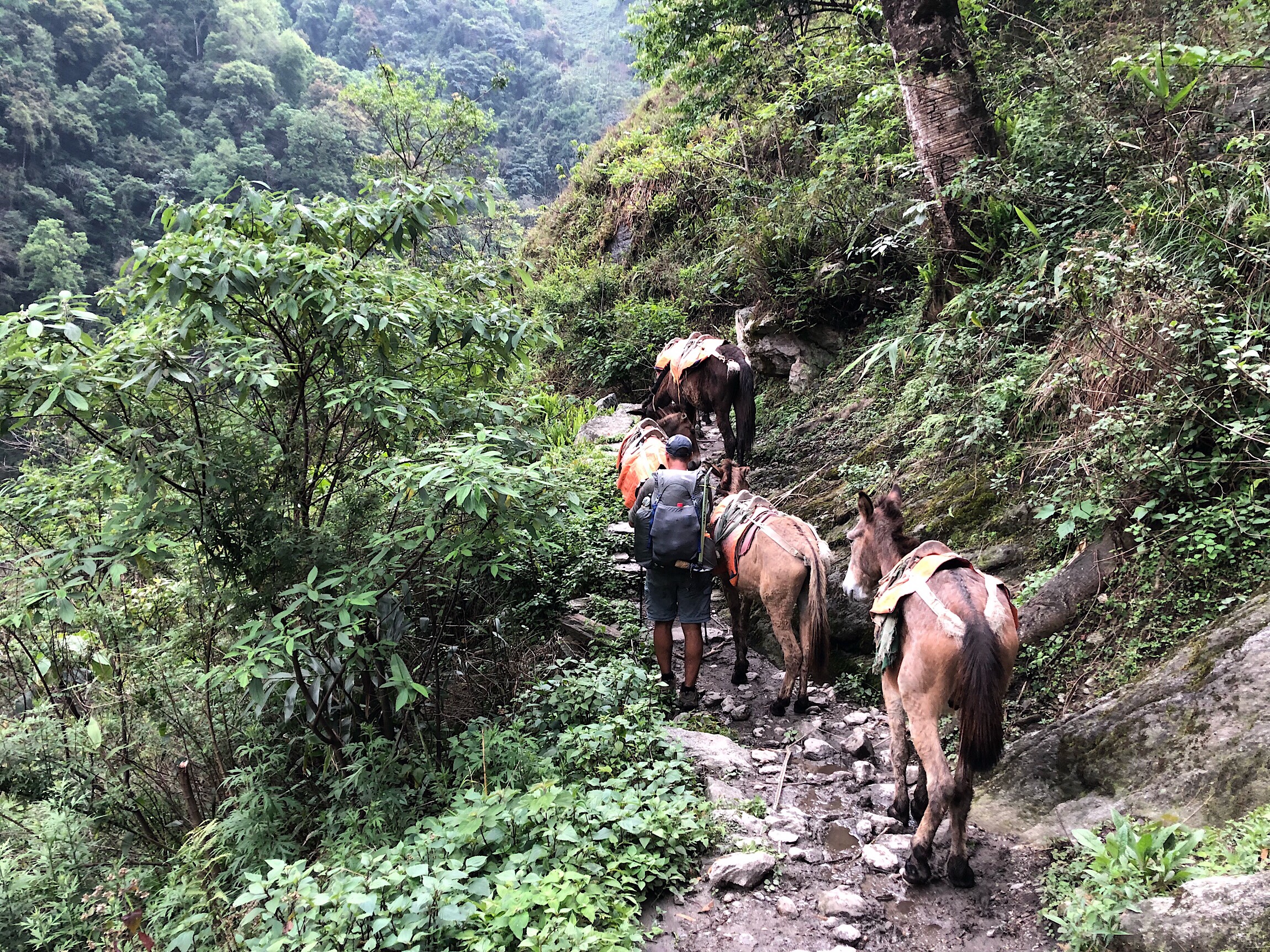 My thigh muscle gets worse as the day goes on, and I was feeling it with each step. We were happy with our progress and chose to look for camping after 4:30pm. Being on a cliffside offered few options, and we could see that there weren’t great contour lines ahead. Plus, it looked like the afternoon rain was finally going to hit. Suddenly, Buck-30 noticed a spot I would have walked right by. It was a flat piece of old farming land with weeds growing in it just above the trail. It just barely worked, and we found spots. Once again, timing was perfect as the rain came down just as we finished pitching our tents. 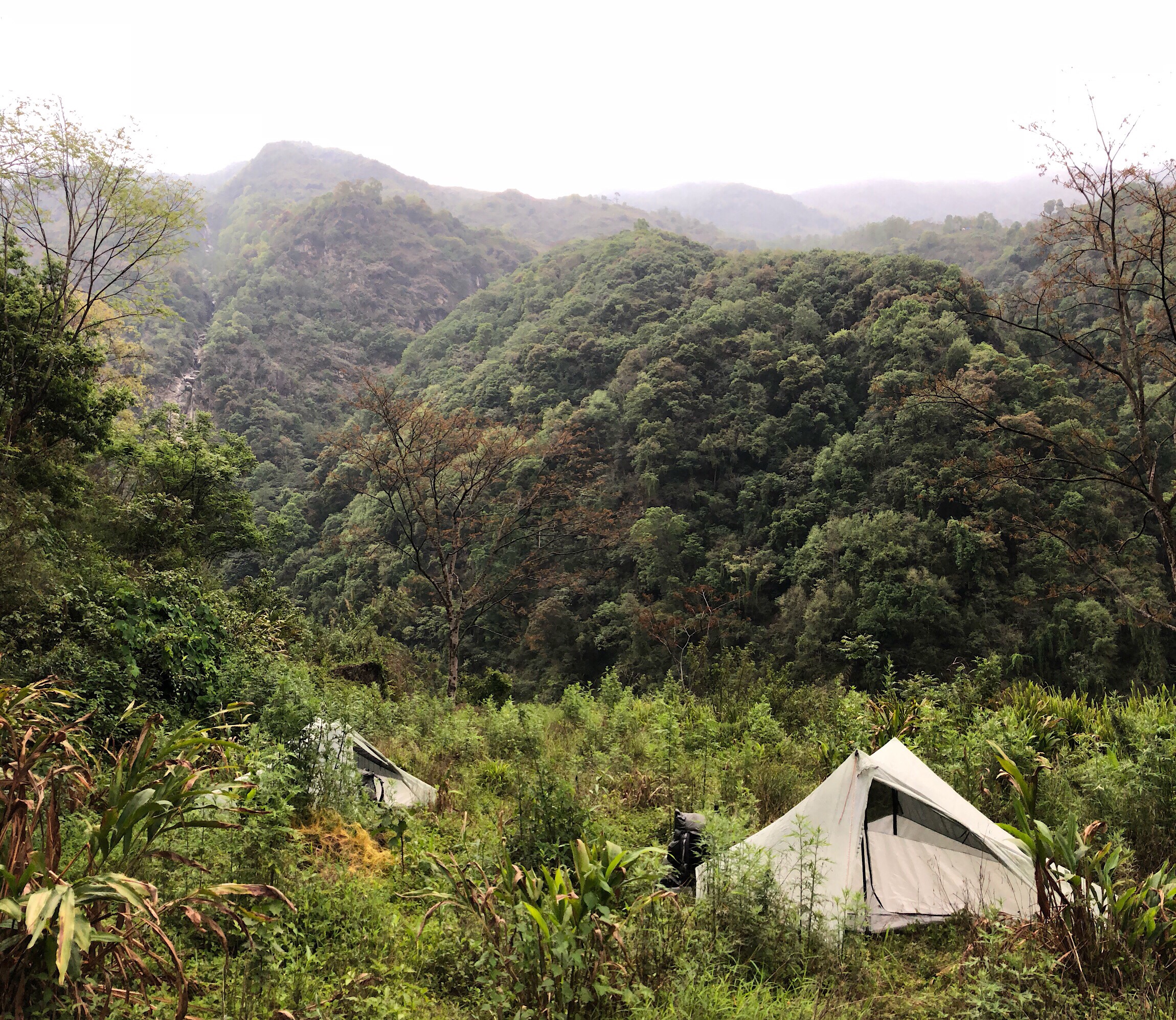 It was the most humid day yet, so once the rain paused, I went to a nearby stream to rinse off. It’s been 11 days since I showered, and I have 7 more. We were dripping sweat all day from humidity. I sat in my tent with as little clothing as possible and had hiker hunger set in for the first time. I just dug through my food bag eating some of everything. I still don’t have a stove yet and cold soaked a ramen packet. It was actually really good! I’m almost out of food, but timed it this way as we will be hitting lots of villages and I hope to supplement along the way. With these full days of hiking, eating our own food, and tenting, it finally feels like a thru-hike!

Two more notes, I had another leech jump on my hand tonight when I was getting in my tent. I got it before it attached thankfully. I’ve dodged them so far. Also, we got a message from Griggs that he is leaving Kathmandu soon and will meet us in Lukla in a week. As a warm-up, he will hike the low route our direction from Jiri to Lukla. Glad he’s feeling better and will join us again soon!