Day 16: Getting That Cultural Experience

Yesterday, when we left Hongon, we split off from the high route, to take the low route around three consecutive high passes that require mountaineering skills; West Col, Sherpani Col, and Amphu Labsta. The Great Himalaya Trail creator, Robin Boustead, recently decided to take the low route off the maps in the future. We aren’t sure why, but it does seem to be that many are taking a very loose interpretation on what it means to hike the GHT. We know these passes are beyond our experience level, and in talking to previous GHTers, they are really not even safe if you do have that mountaineering skill set.

There is a Great Himalaya Trail Low Route Guidebook written by Linda Bezemer that can be found online as a free download. The low route is also described as the “cultural route” because it passes through the tiny villages in the little traveled parts of Nepal. To me, it feels like the real Nepal, versus the touristy one, and it was very uniquely special today more so than the previous days. I absolutely loved it. Buck-30 felt like it wasn’t much different from what we’ve seen before, and joked that I was seeing it through rose road colored glasses because we got our most relaxing terrain yet today with half the day being on roads. It may also be that this was the first day I felt like I finally had my body on this hike. Starting off sick, then getting my period, and then dealing with a painful thigh muscle, has added to the already uncomfortable and challenging conditions out here. Today was the first time I felt good most of the day, so maybe he was right. Either way, it was a fun day for me.

Buck-30 has the details on his journal, but we were pleasantly surprised to get road walking for about half our miles today. In the morning, after a 6am start, we walked along the Arun River, and the road magically appeared after a village. We were in disbelief that we could just walk with little elevation change or terrain difficulties. I really was in heaven, and was even able to eat a bar while walking! Multi-tasking trail! 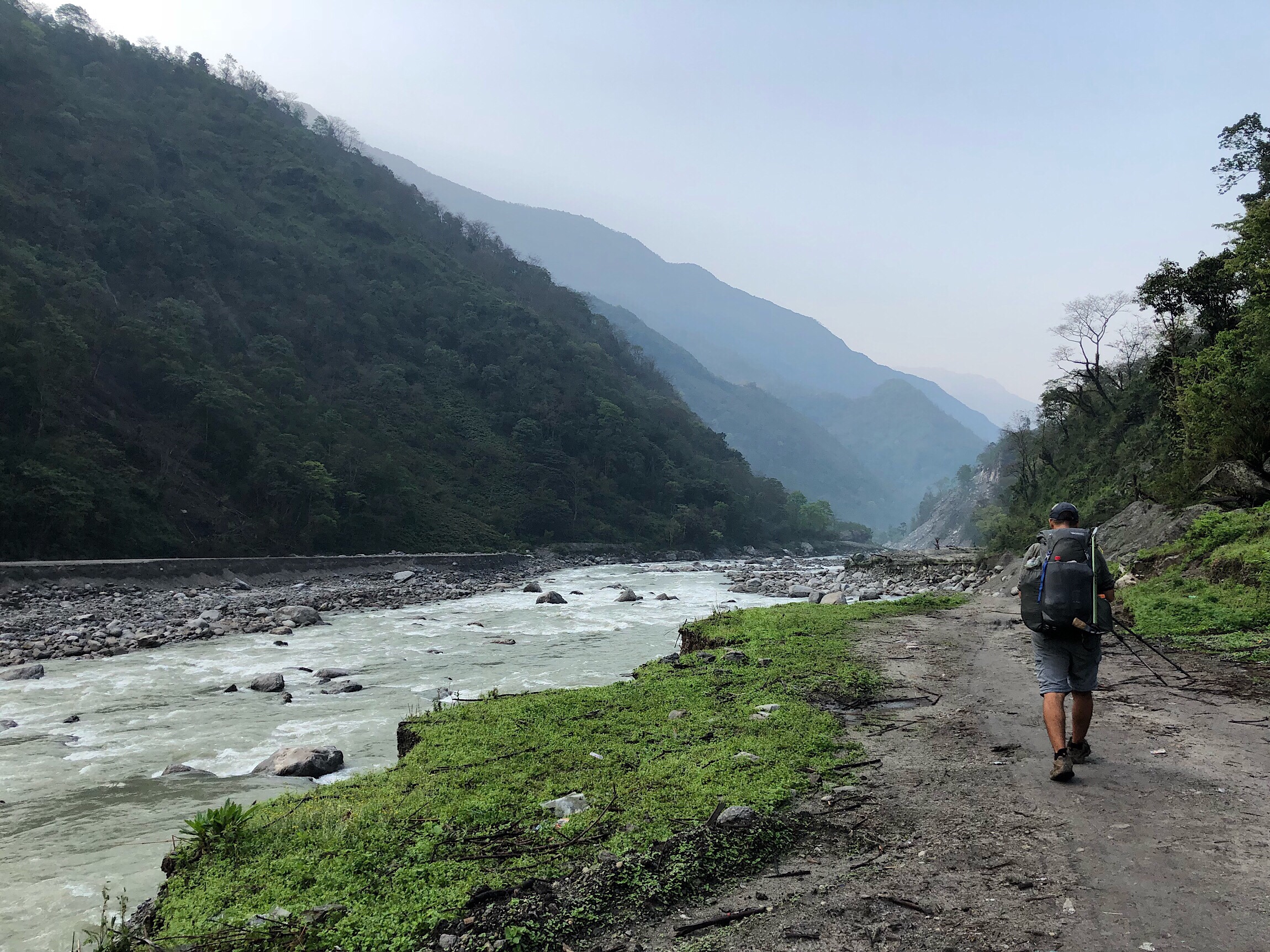 I know there is some controversy over roads being built over trail in Nepal. The only cars on the road for now were a couple vehicles used for constructing a new bridge and dam. I’m sure some day it will have cars, but for now, it was people just walking village to village like a morning commute. The trails we’ve been on are used in similar ways, to connect the villages, so it does make sense that they would want something more welcoming to commuting. We were in heaven and just kept checking the GPS to make sure it wasn’t too good to be true.

One village we went through early on had a small store with food. We are getting to the point that we’ve eaten most of the food we brought. We checked out a store for the first time and bought some things. They had big fried bread loops, that they actually called donuts. Like plain funnel cake. They were only 20 cents each. I got 2, and Buck-30 got 3. He would love those every couple of days. That shop is the closest we’ve come to a 7-11 kind of experience out here, but nothing remotely like it. Really, a 7-11 is all Buck-30 needs along a hiking trail to be a happy camper. I ended up getting 2 donuts, 2 ramen-type noodle packages, and a sleeve of crackers for just $1. It was amazing how cheap it all was. Best part was that since we were road walking, we got to relaxingly eat while we walked. A rare moment out here. 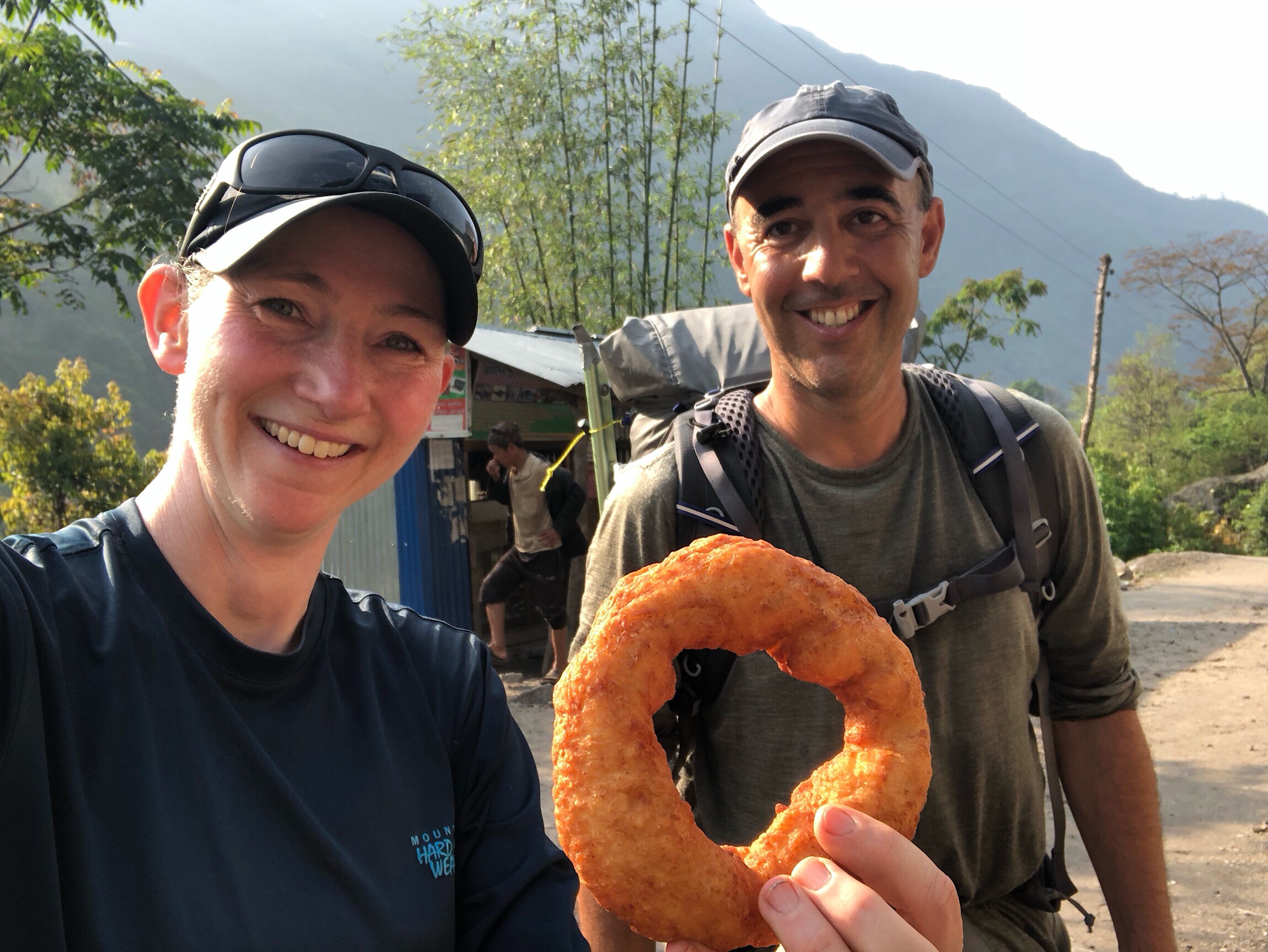 We did get back on some of the more routine type of terrain after the morning, and found ourselves just weaving from one village to the next. Sometimes, with little space between. Like the road, many were commuting from one village to the other. Many times it was school children. One group was quite young, and I was just amazed to see a 5yr old girl in Crocs flip flops giving a piggy back ride to a small 4yr old boy…over rocky terrain I need hiking poles to feel somewhat stable on. There are just so many small things that we see culturally everyday that make this whole experience surreal. It’s tough to describe, and often it feels too intrusive to take photos. 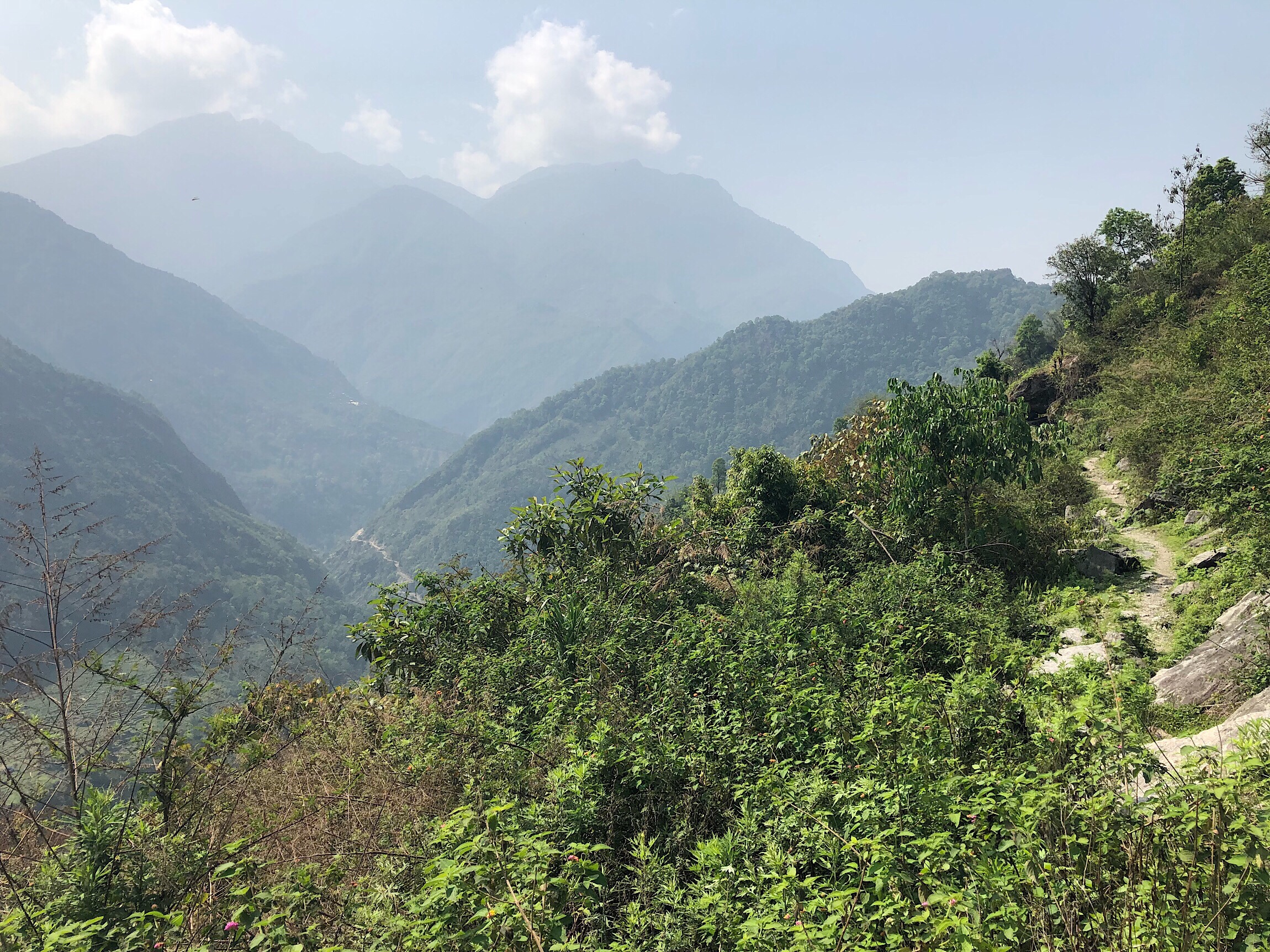 The people range in reaction to us from indifference to shock. Many of them know how to ask where we are from or where we are going. They know California, so we just say that. Some just stare in awe and smile and take us in. The kids are more forward, and seem to have been taught some basic terms to converse. “From where?” “How many members (in your group)?” “What’s your name?” and “How old are you?” We answered those questions a lot. We also would get giggles at times from shy girls or women, and what seemed to be taunting and laughing at times from seemingly less sane older men or women who probably had the same impression of us. 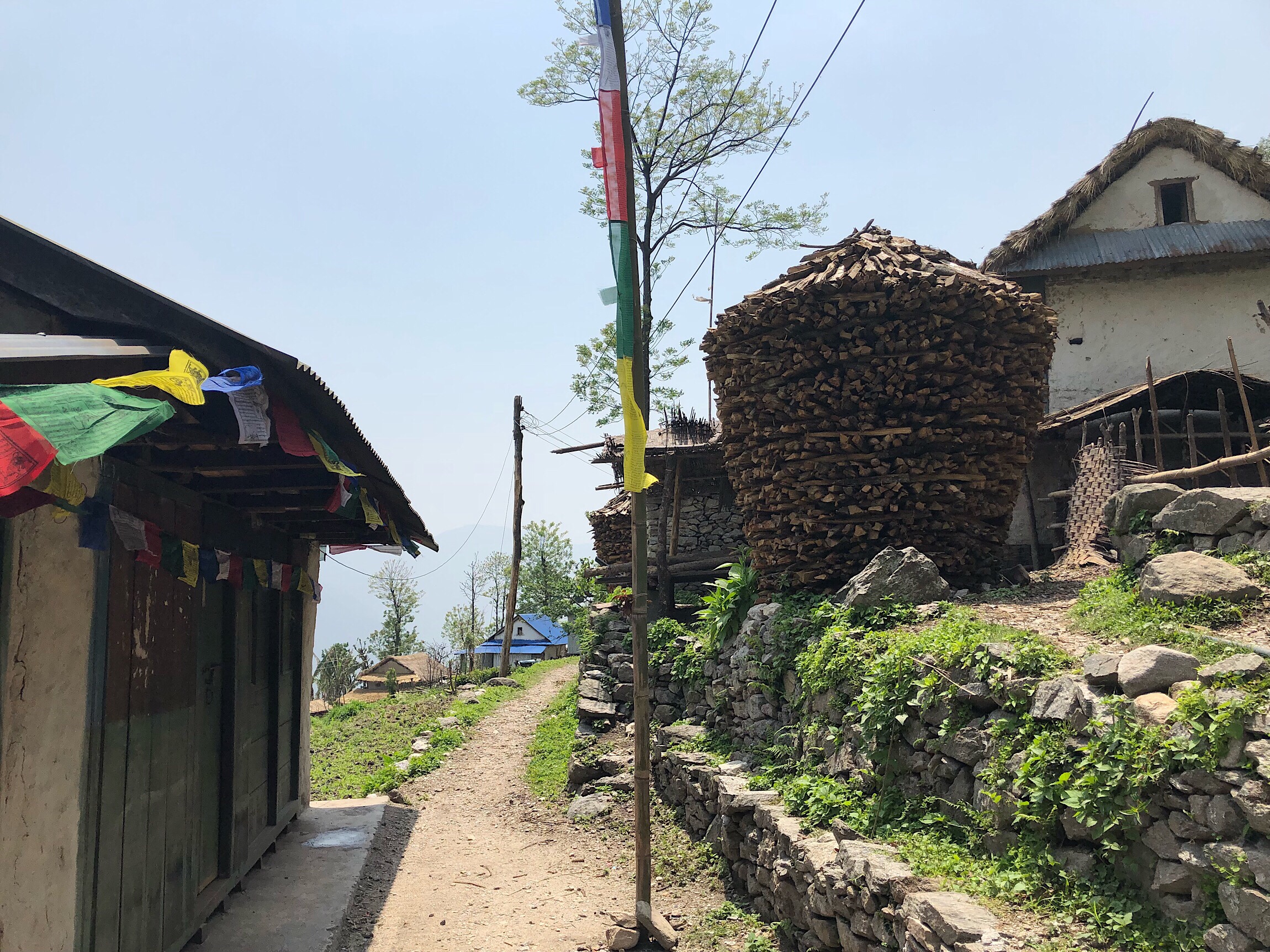 I was entertained all day just observing the daily routines and culture. Buck-30 understandably found it to be a bit much, and just wanted to walk without interruption. I especially enjoyed seeing the school days in process and soccer fields being used with the most unreal backdrops. 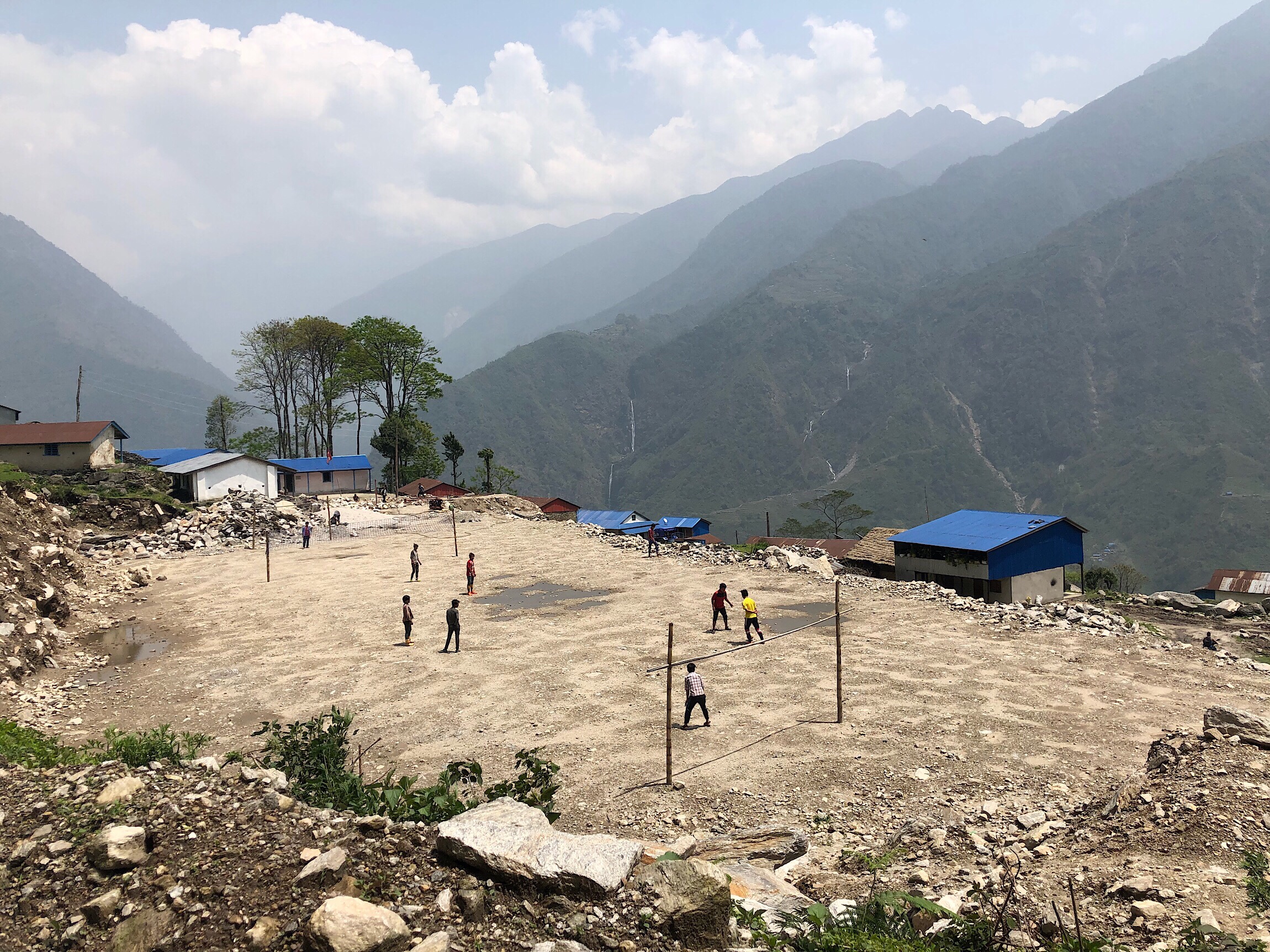 Much of the land we walked by was being cultivated for something at some point. It was very formally laid out along hillsides to be like leveled terraces I guess you’d say. 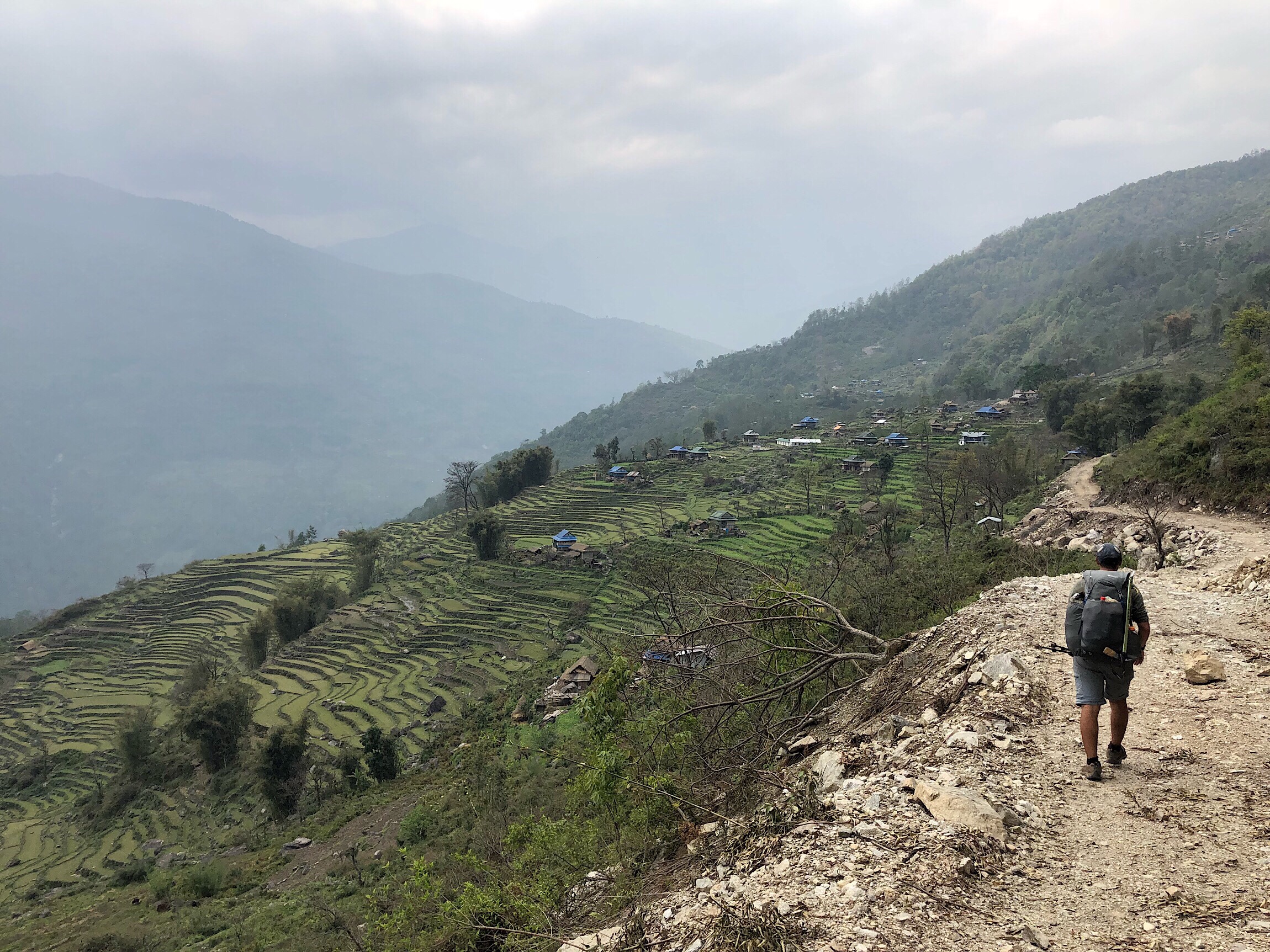 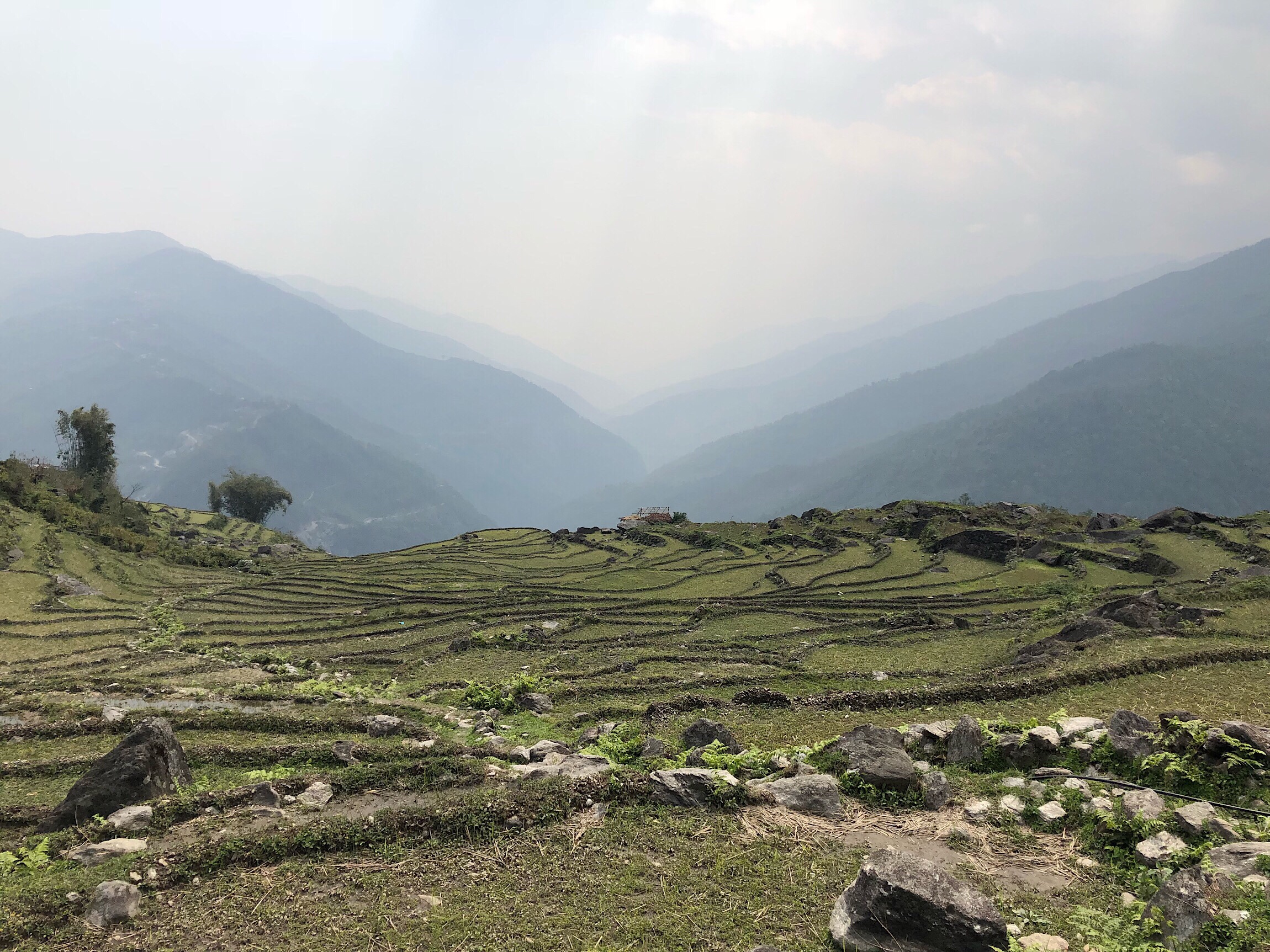 We took a long 1.5hr lunch break in the woods to rest and dry things out from the last couple nights of rain. It was really hot and humid. The goal was a break without being watched like usually happens in villages. We were pretty wiped out, and easily took a long break. 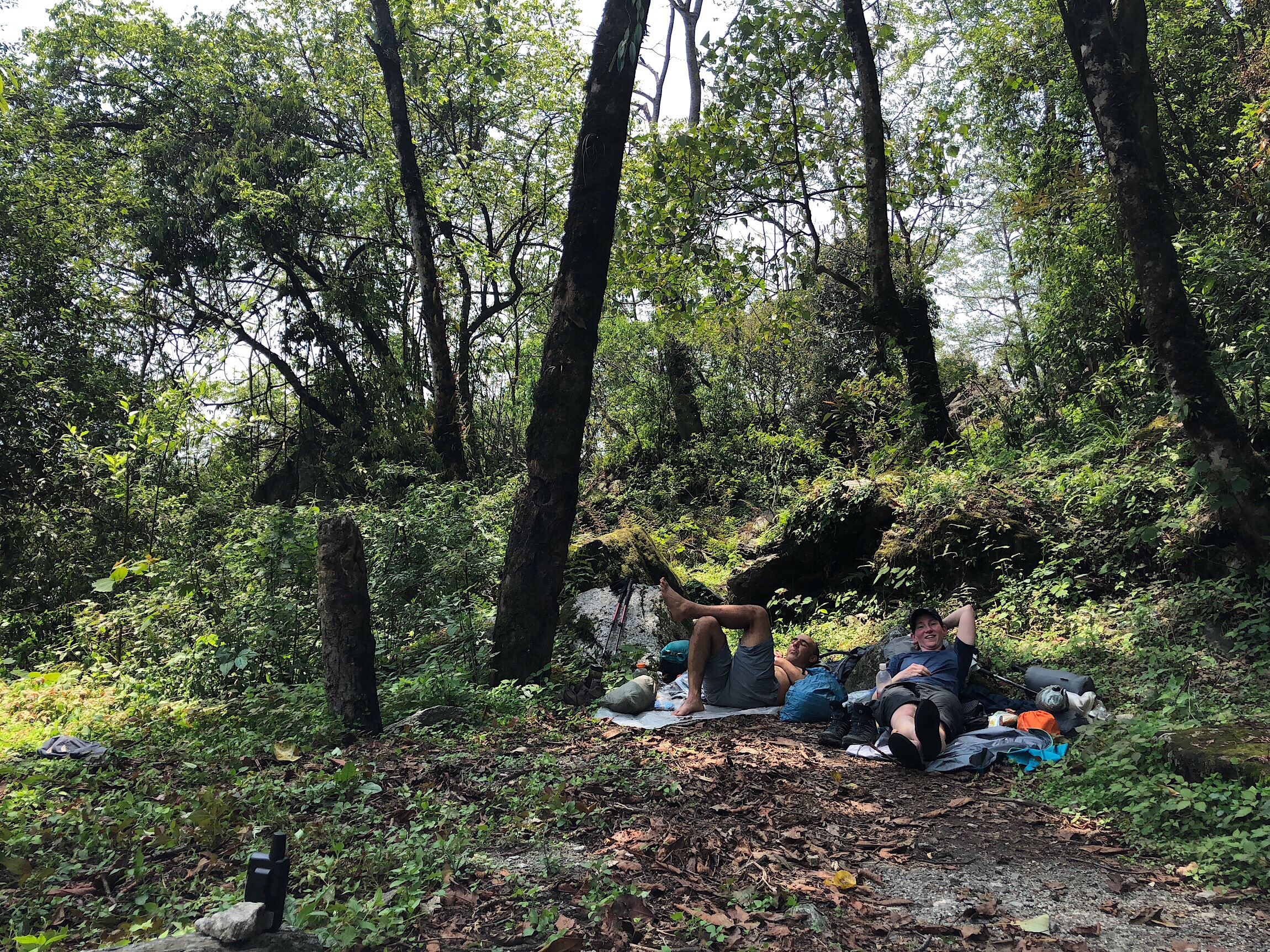 Just as we started, a man with a small machete came out of nowhere down the trail. He said hi, then sat on a rock right near our lunch spot and just sat there on his phone for a good 20mins. It seemed so random at the time. He asked a couple questions, but mainly was just doing something on his phone. Almost everyone seemed to have a smartphone out here. That always throws me. Even if there is no service, they are using them for photos, music, and video. We even had a teenager ask us for a selfie at one point. We asked what plan they are on, since our Ncell doesn’t work here. The response over and over is something called Skye, which I hadn’t heard of. Anyway, after about 20mins, the man jumped up, said bye, and took off into the brush waving his machete. What we thought was a random spot, was actually an overgrown trail we didn’t even notice! The rest of lunch, we could hear him whacking away at the jungle-like brush. 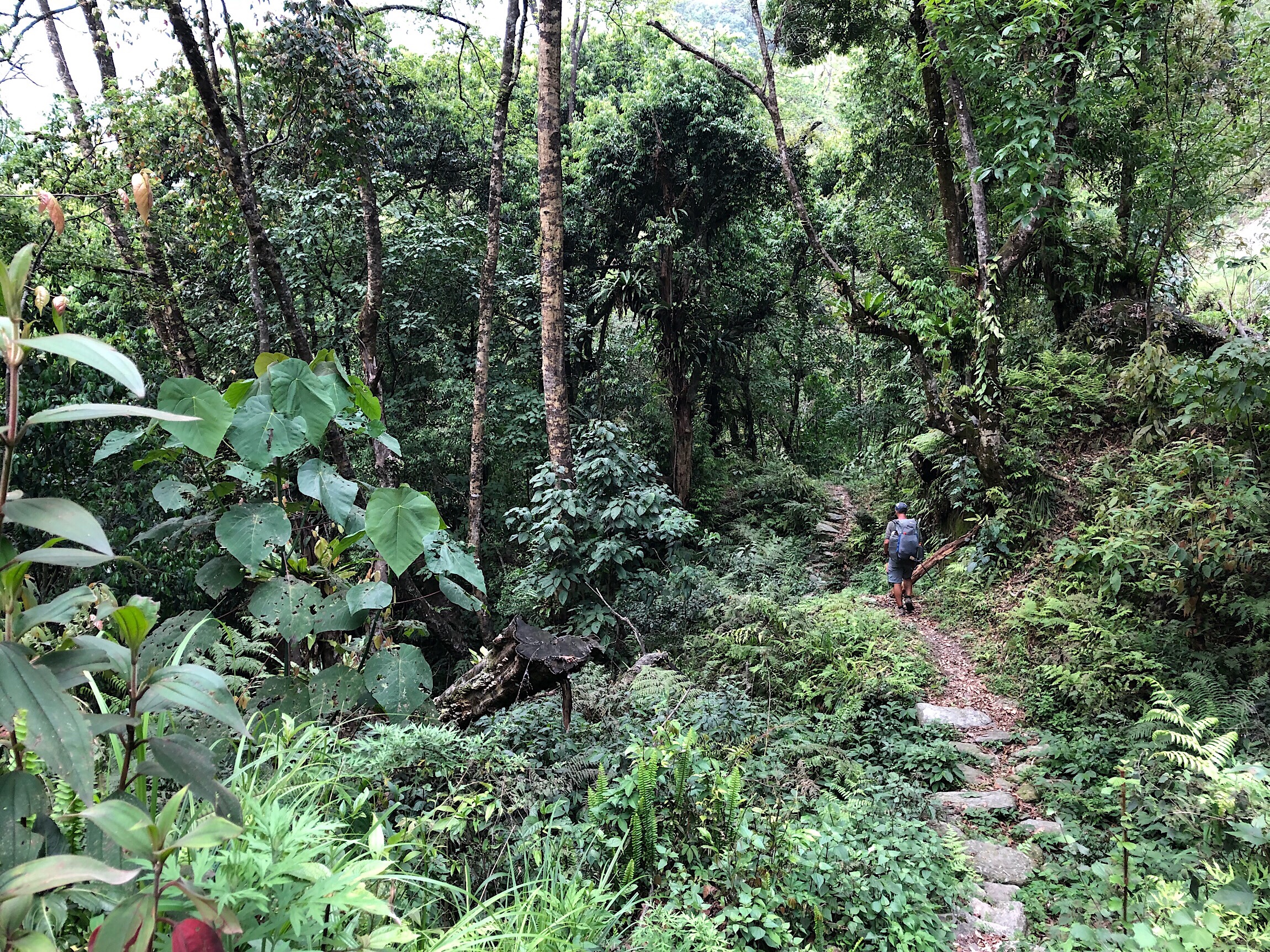 As the day went on, we realized we had time to get a long climb out of the way at the end of the day, but it would land us in a more developed trading village called Seduwa. We decided to go ahead and do that, and then we could get dinner and charge things. We aren’t aiming for villages, and prefer our tents, but they are so cheap, that it works well if we happen to land on one.

As we got to the bottom of the steep climb it was late afternoon, and we could see it was going to likely rain soon with some afternoon rumbles as well. We figured that if we got wet, we’d end up at a guesthouse anyway. 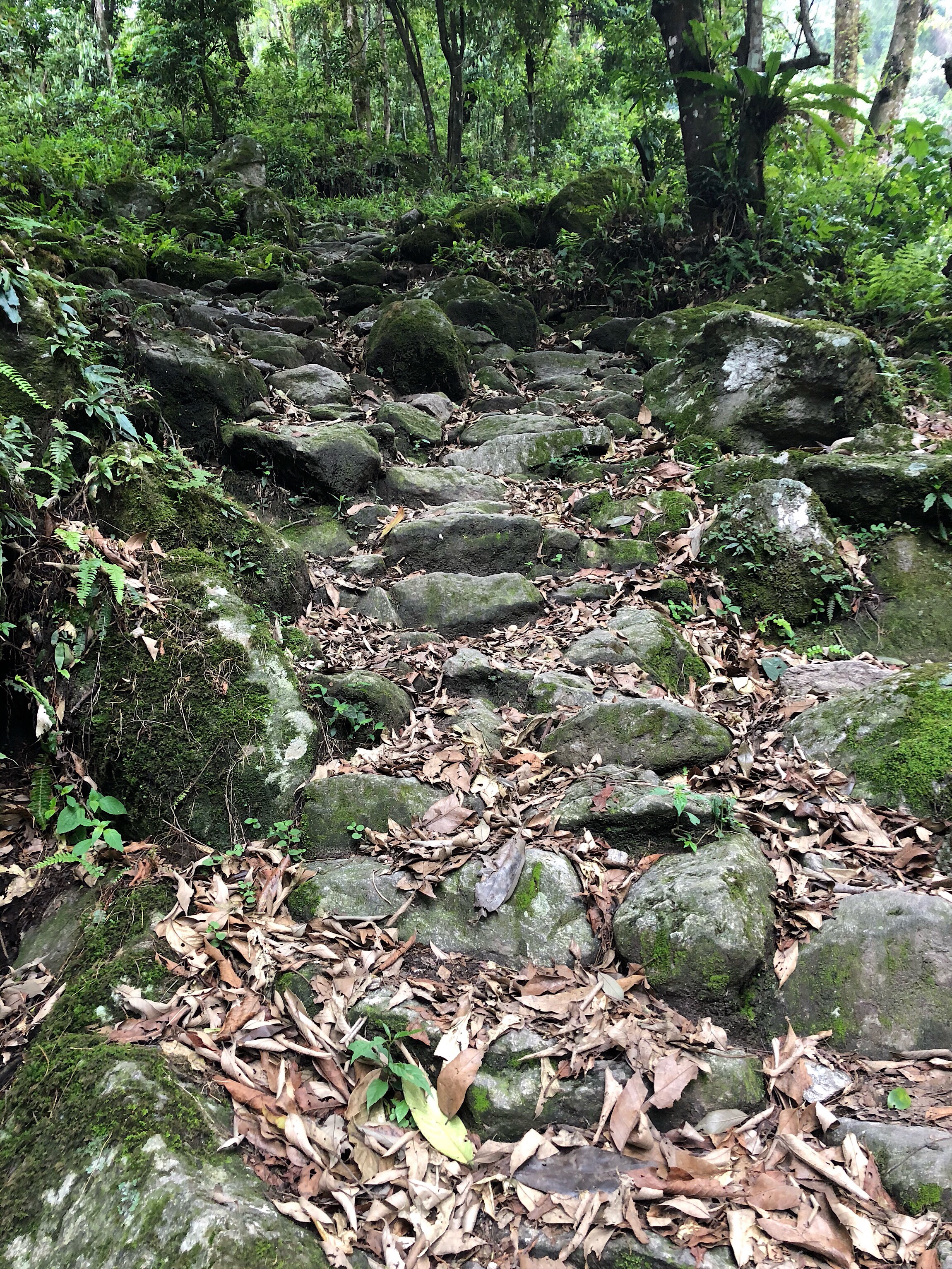 As we got to the top of the climb, the sprinkles fell. There tends to be a pattern we’ve noticed of spurts of rain for maybe 10mins at a time more intensely, and then sprinkles. We lucked out that most of the way, we were able to sit in someone’s small store or under an awning for the spurts. Our umbrellas worked great since we were far too hot and already soaked in sweat to put on rain gear. A kind woman provided us shelter in her small store that seemingly came out of nowhere when it rained hard for a short period. Here is Buck-30 hiking away from it. 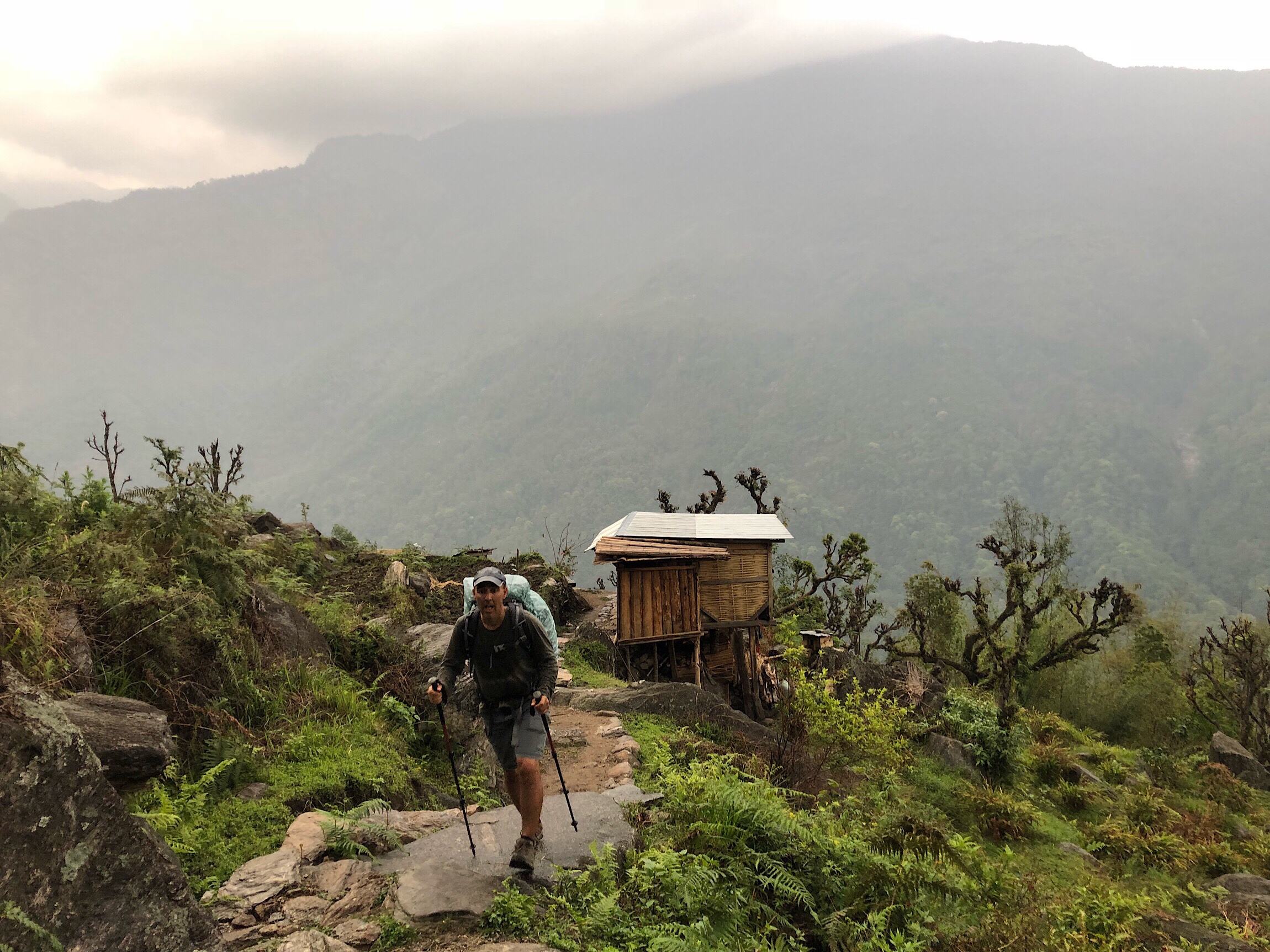 As we got within 30mins of Seduwa, a trio of young girls maybe 10yrs old stuck to us asking questions, giggling, and delaying our progress as they bounced along the wet slick rocks in their flip flops. One seemed to be hoping we were staying at her house. If they were behind us, they were on our heels (in the harder rain now), giggling, and really annoying Buck-30. He would try to tell them to walk ahead, and they would refuse, or go ahead and delay progress. It was like he was herding the mules from yesterday watching him try to prod them forward. Right when we got to Seduwa around 5:30pm, the rain really hammered down. There were plenty of buildings, so we jumped under the awning when it came down really hard. 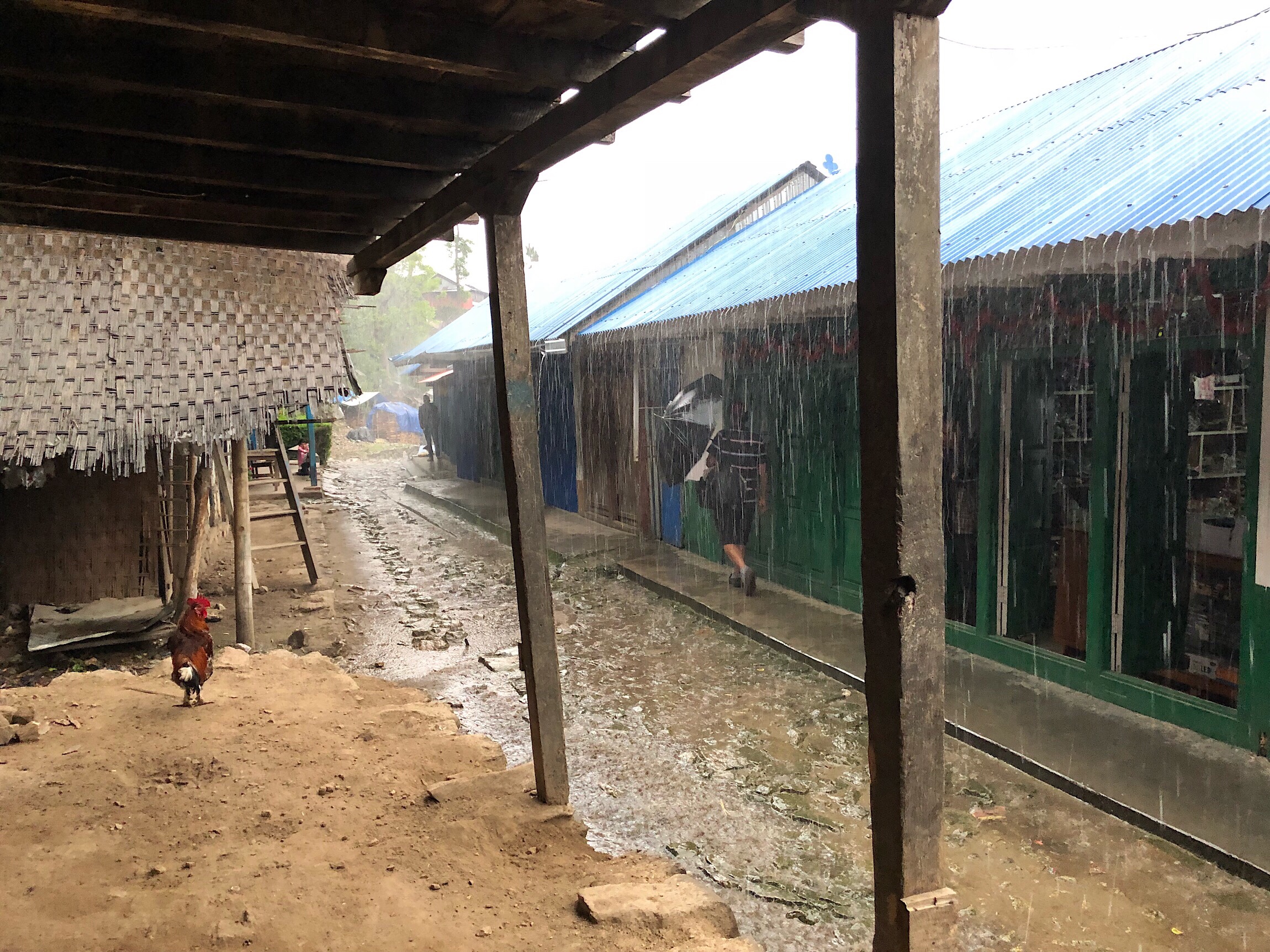 We don’t know if there were multiple choices, and just picked the first place we came to. La Cha Go Si Hotel & Lodge is what the sign said. The owner was smartly not willing to negotiate price. We shared a room for $5 rather than each paying $5 for a solo room. They served only dal bhat for dinner, which was understandable as many men were waiting. They had had solar charging, so we got to top things off. 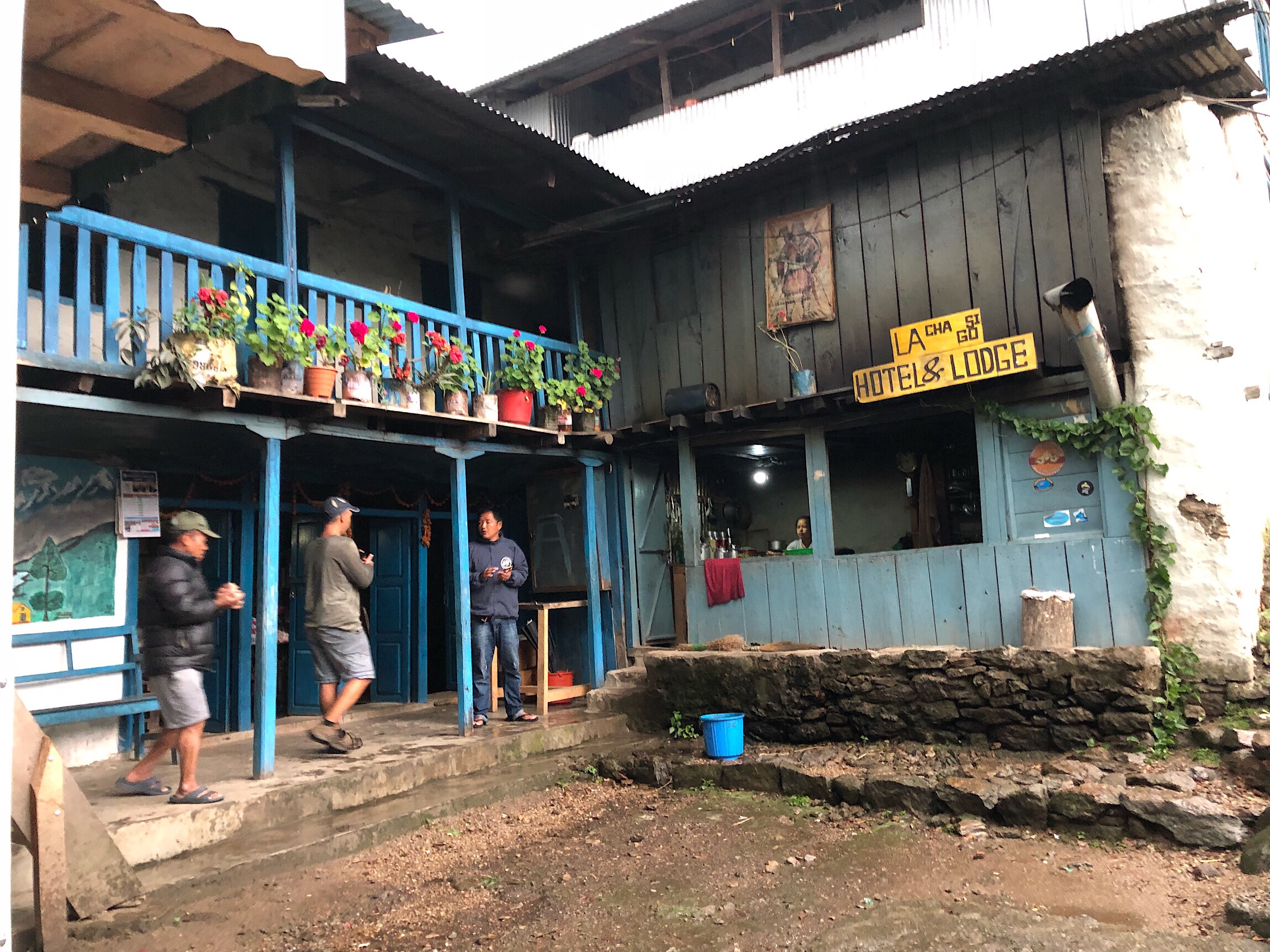 The rain seriously came down hard for quite a long time into the evening. I swear the sound of rain on a tin roof is so wonderful. I feel like we could have been stuck in a flood if we had chosen to tent. Out of nowhere, we had very limited cell phone reception that was slow and cutting in and out. Buck-30 liked it, since he doesn’t have his inReach set to unlimited messages like me, and hasn’t been in touch with anyone back home this whole time. My anxiety immediately went through the roof, and it made me feel overwhelmed. I ended up turning it off, and will just have to learn to compartmentalize it when I do get service. It’s just that a lot comes through, and it feels overwhelming, so I get anxious, and then exhausted right away.

We both had the dal bhat, which is the one meal that usually offers seconds for free. We both have the same kind of stomachs that are hungry enough to eat the dal bhat, but picky enough, that we barely finish a plate of it. However, if the meal was something we craved, like a burger and fries or pizza, we would have devoured so much more. I was pretty worn out from the day and then the cell phone service, and went to sleep without writing the blog. I figure I’ll have time to catch up. What a day!