Today we finally reached Lukla, our first major town with modern services. Yay! This will be a more efficient and shorter entry. Since I finally got cell reception to post the blog and catch up on correspondence. I prioritized getting as many posts uploaded as I could. 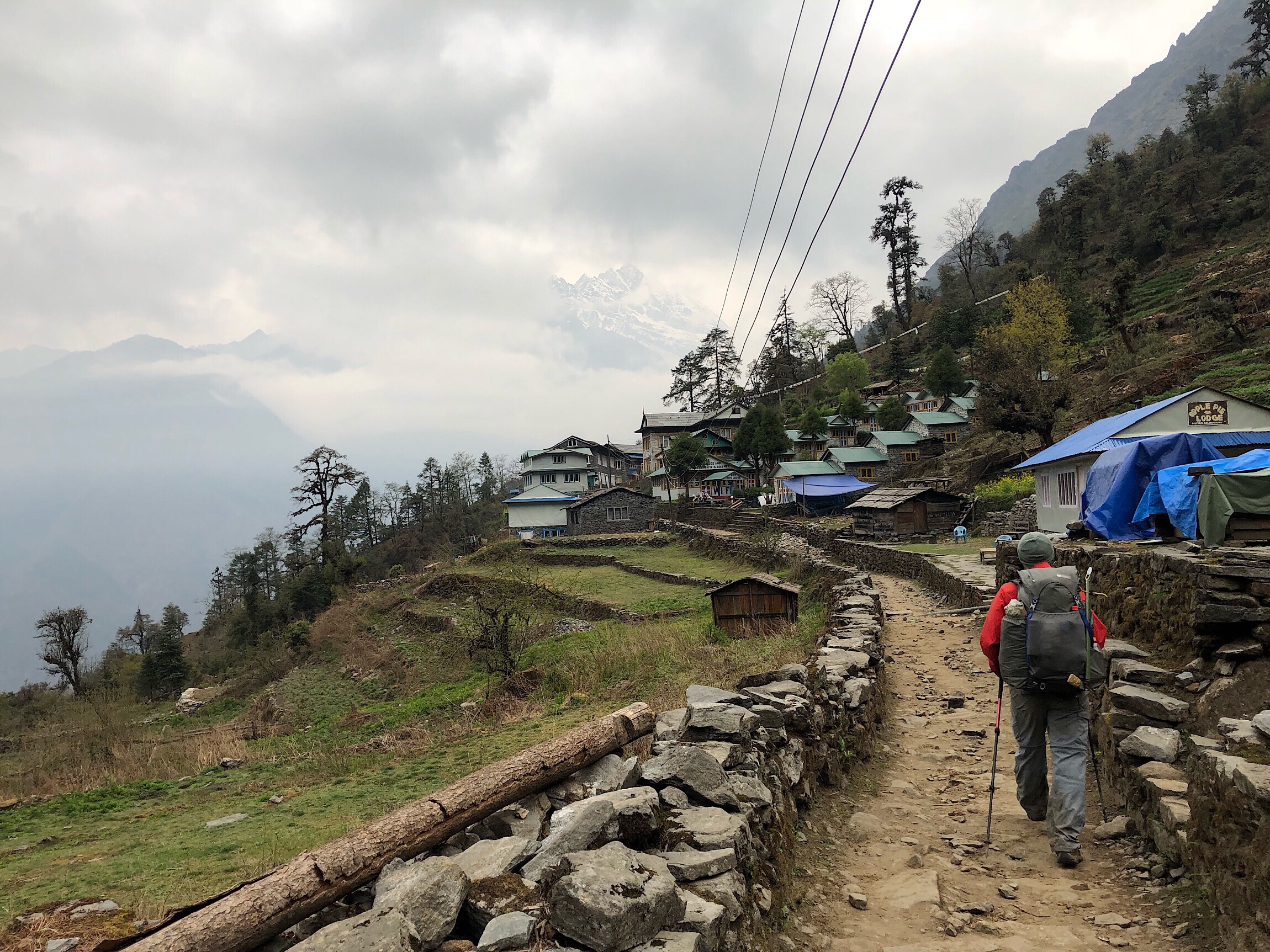 Since Lukla has an airport, there are plenty of hikes that launch from there. The trails turned into a superhighway. Nice and wide with more traffic. 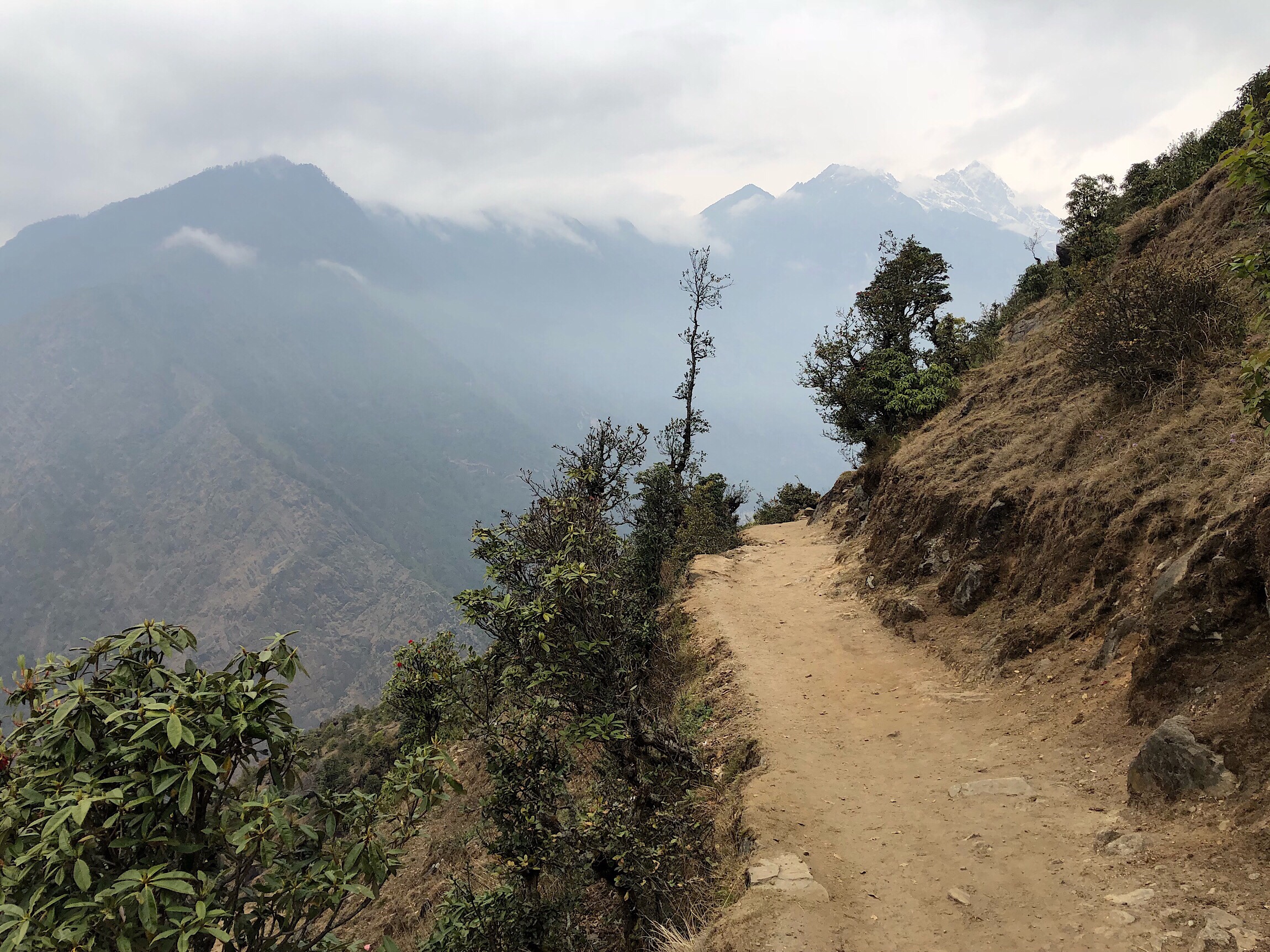 Most annoyingly, was the great increase in mule trains shuttling goods. The smell of mule urine was potent and they would take over the trail when they came through. Buck-30 learned they charge right ahead as one nudged him with their wide load and easily knocked him off balance. The strategy that seems to work that I learned from porters is to hold your hiking pole out in front of the mule’s face as they approach you, and they turn away from you. 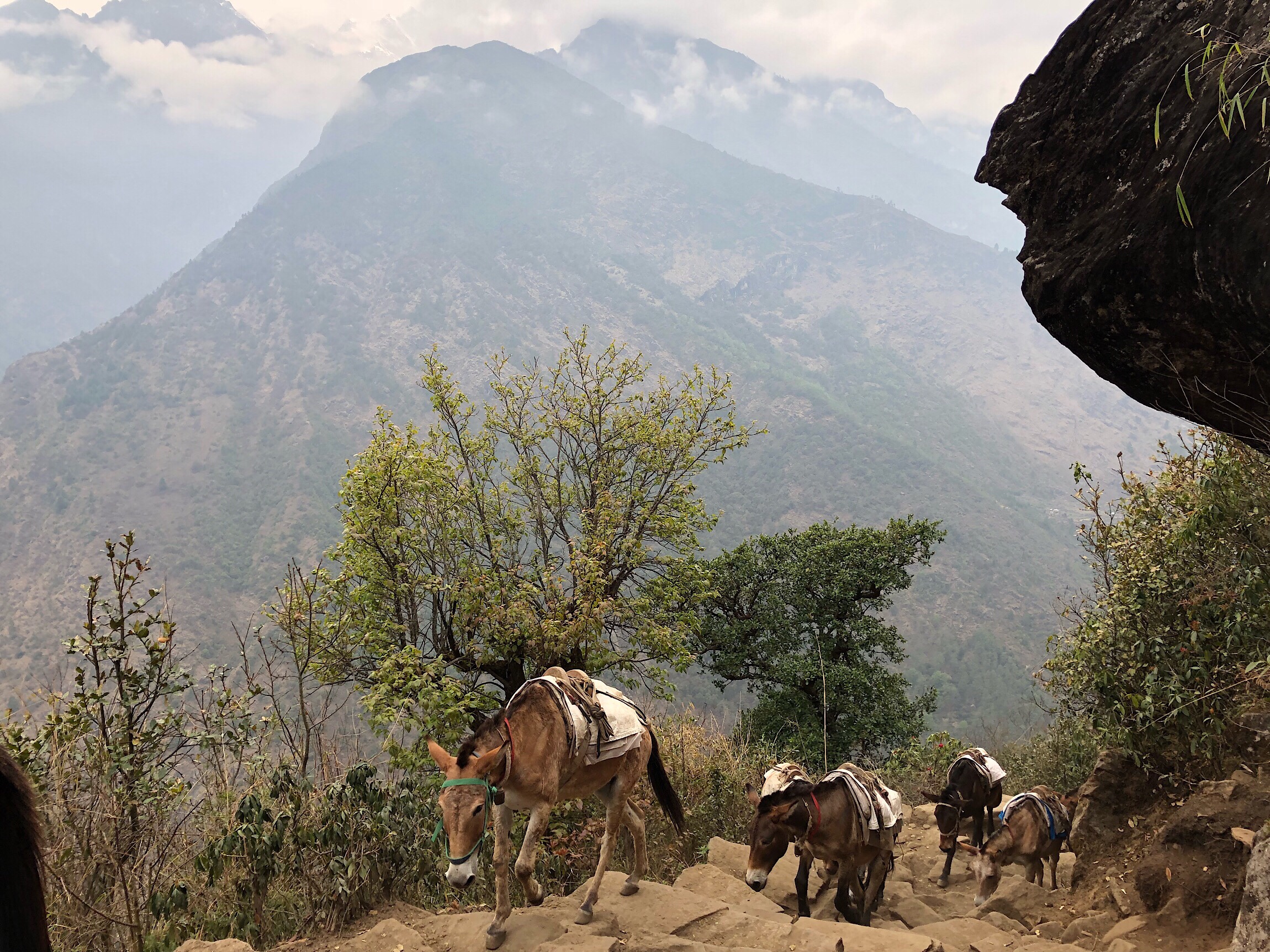 We made it into Lukla by 9:30am. The airport is known for its incredibly short runway that angles downhill off a cliff basically for those taking off. There was a fairly constant stream of air traffic from small planes and helicopters. There were also a ton of school children walking around as we approached that we wove through. 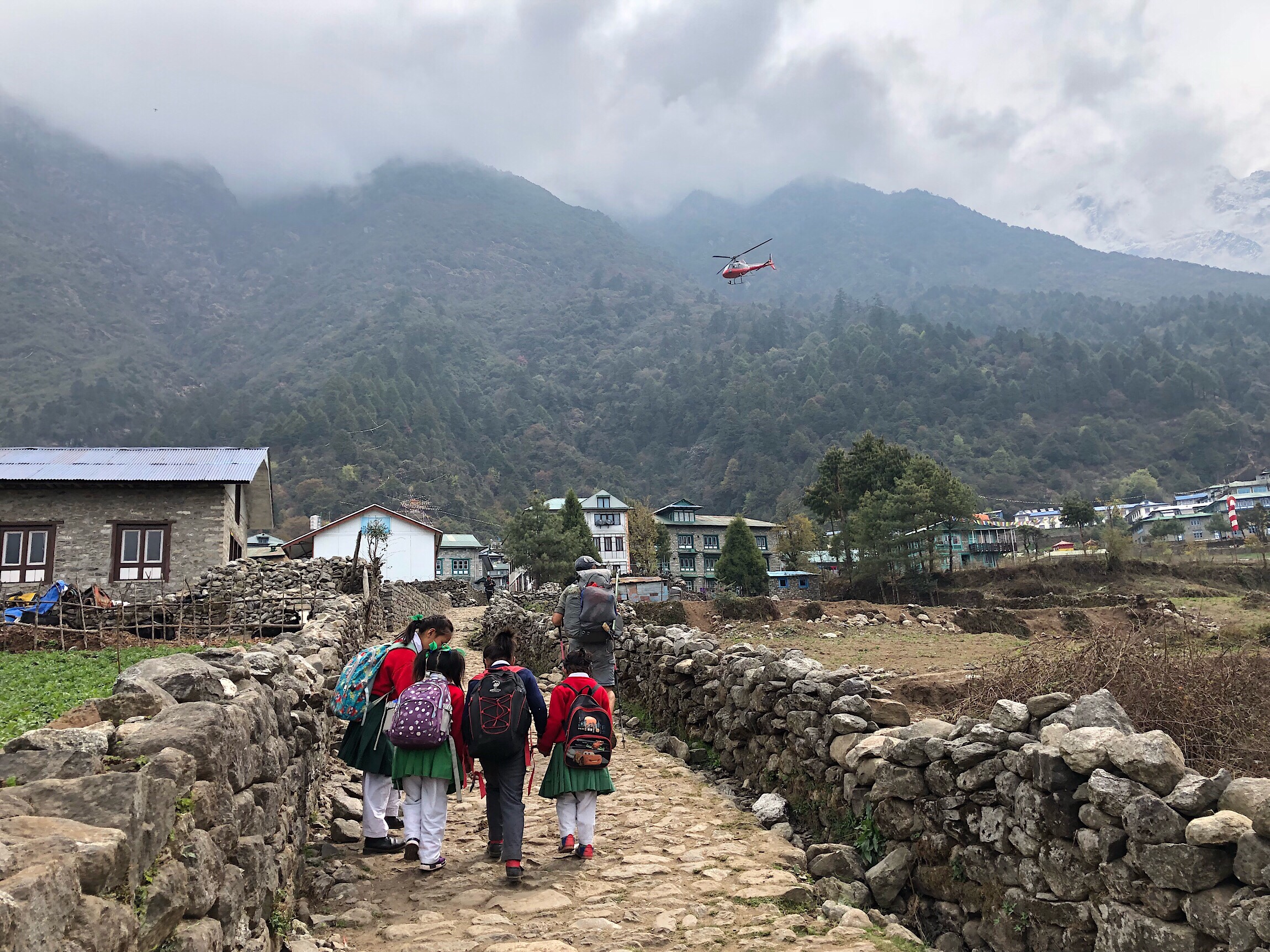 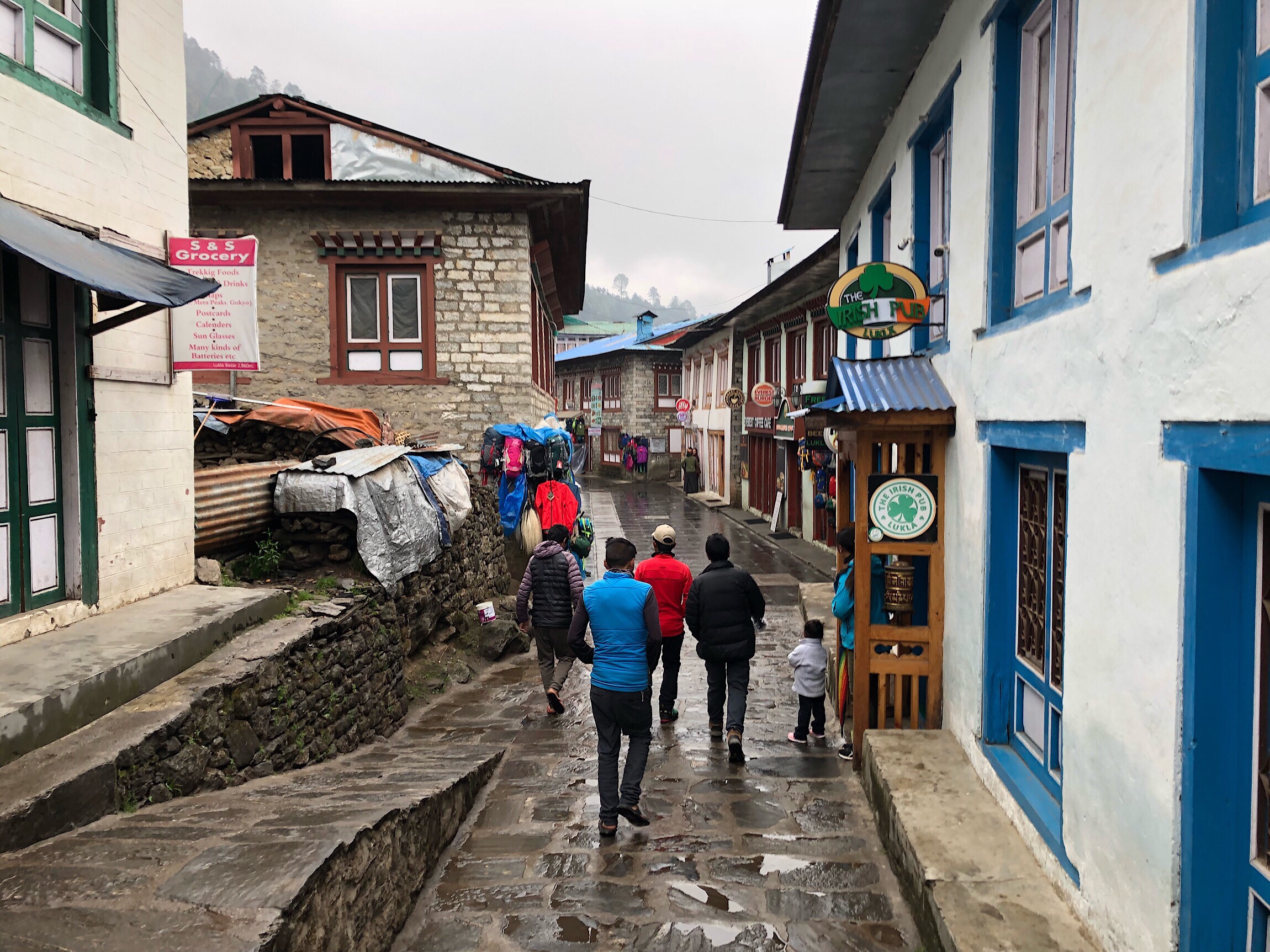 The most exciting part of going through Lukla was getting FOOD! We ate at the Everest Burger. We sat there for three hours. Each of us ate a burger and a personal pizza. More importantly, there was Baskin Robbins ice cream nearby. I crave chocolate milkshakes on trail, and drink a ton of chocolate milk when I’m home. It had been way too long, so I ordered one. However, they used a powder and didn’t make the milkshakes with ice cream. I got behind the counter and walked them through how to make the milkshake I was craving. We used four scoops of ice cream, milk and, plenty of Hershey’s syrup. It was perfection! However, I didn’t pay attention (or care) how much it might cost. I figured it couldn’t be that bad…it was $14! Oops! Well, I’d say it was worth the splurge! 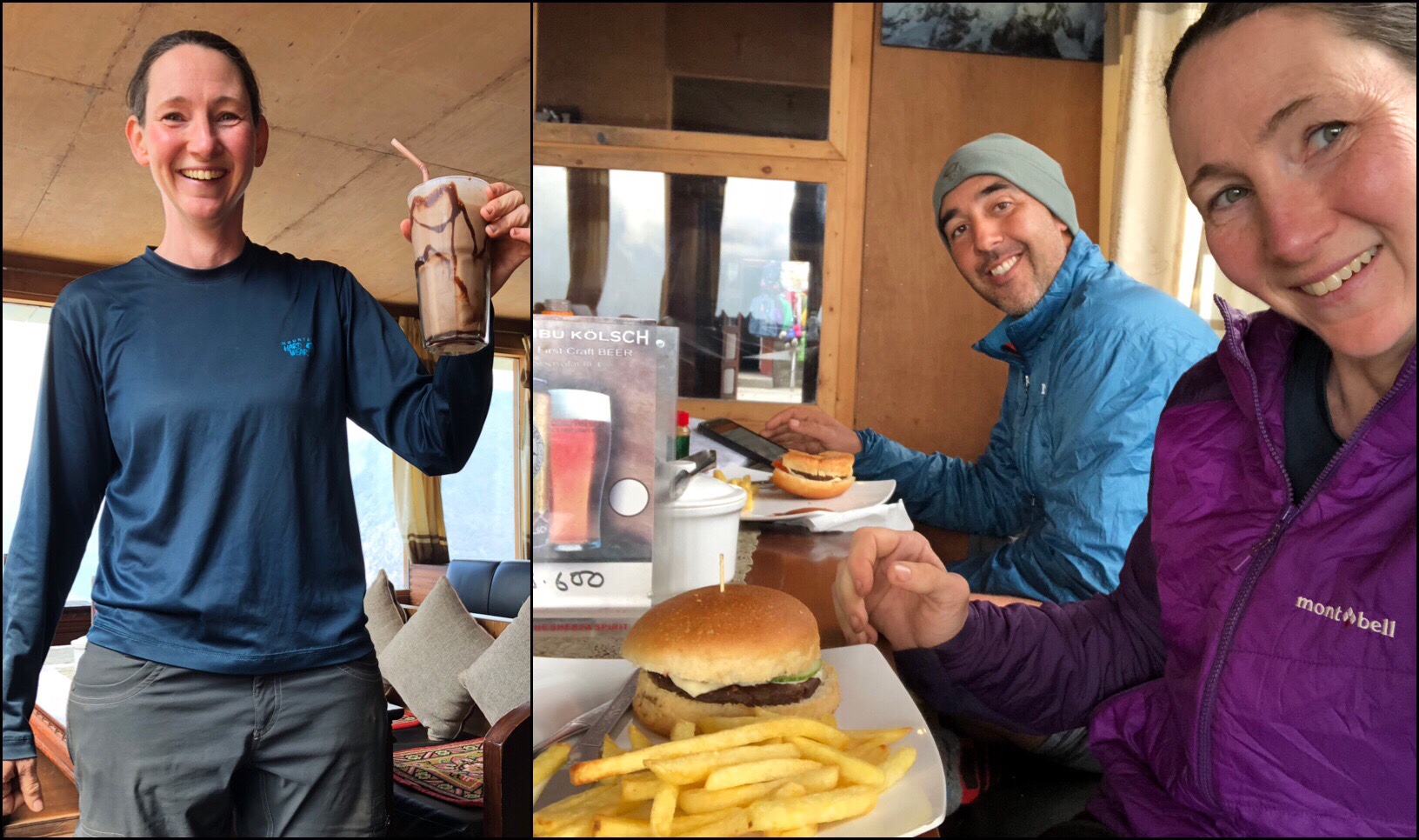 We also got a resupply our agent Urja (from Alliance Adventure) had transported to a local lodge. We are very happy with our choice to supplement with some food from home, because there will be stretches in the next two weeks where we will need to have our own food. We totally could have just had our ice axes and crampons sent to Lukla as well, but were under the impression we might have needed them in the first three weeks. Nope, not needed at all. We’ve been carrying them for no reason! So, we loaded up with 5 days of food and set off around noon to hike on towards Namche.

We didn’t realize we’d be timing it the way we did, but it isn’t necessary to hike through Lukla if you don’t have a reason to go there. Ideally, I think mailing stuff to Namche would have been better, but we aren’t sure if that’s possible because it would require a porter. Our agent was just easily able to get our duffle bag of food to a local hotel in Lukla, so it worked out.

Once again we had rain for the afternoon. This was heavier rain than we’ve had though. There was a permit checkpoint just as we left Lukla and this was one we needed to pay for. We are so skeptical, and it seemed so informal, that we did question it at first, but it was legit. 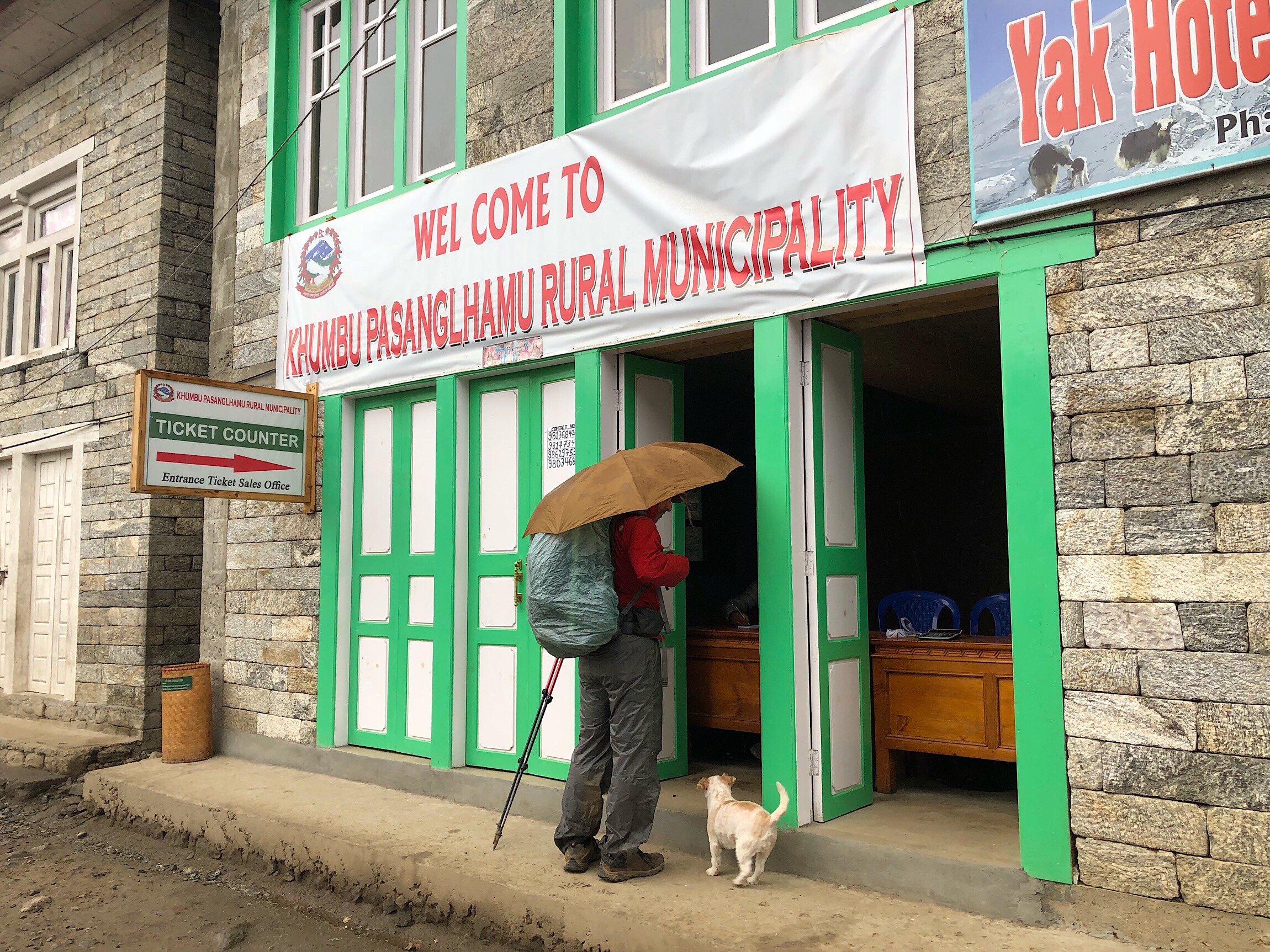 Being stopped for a permit purchase. Notice the guard dog;)

We just hiked a few more hours to Phakding for the night. We stopped there because that’s where Griggs was! Remember he left us two weeks ago due to a mystery illness zapping his energy. He recovered and hiked a bit in this area after being in Kathmandu for a few days. He missed ~140mi/225km of the hike unfortunately. 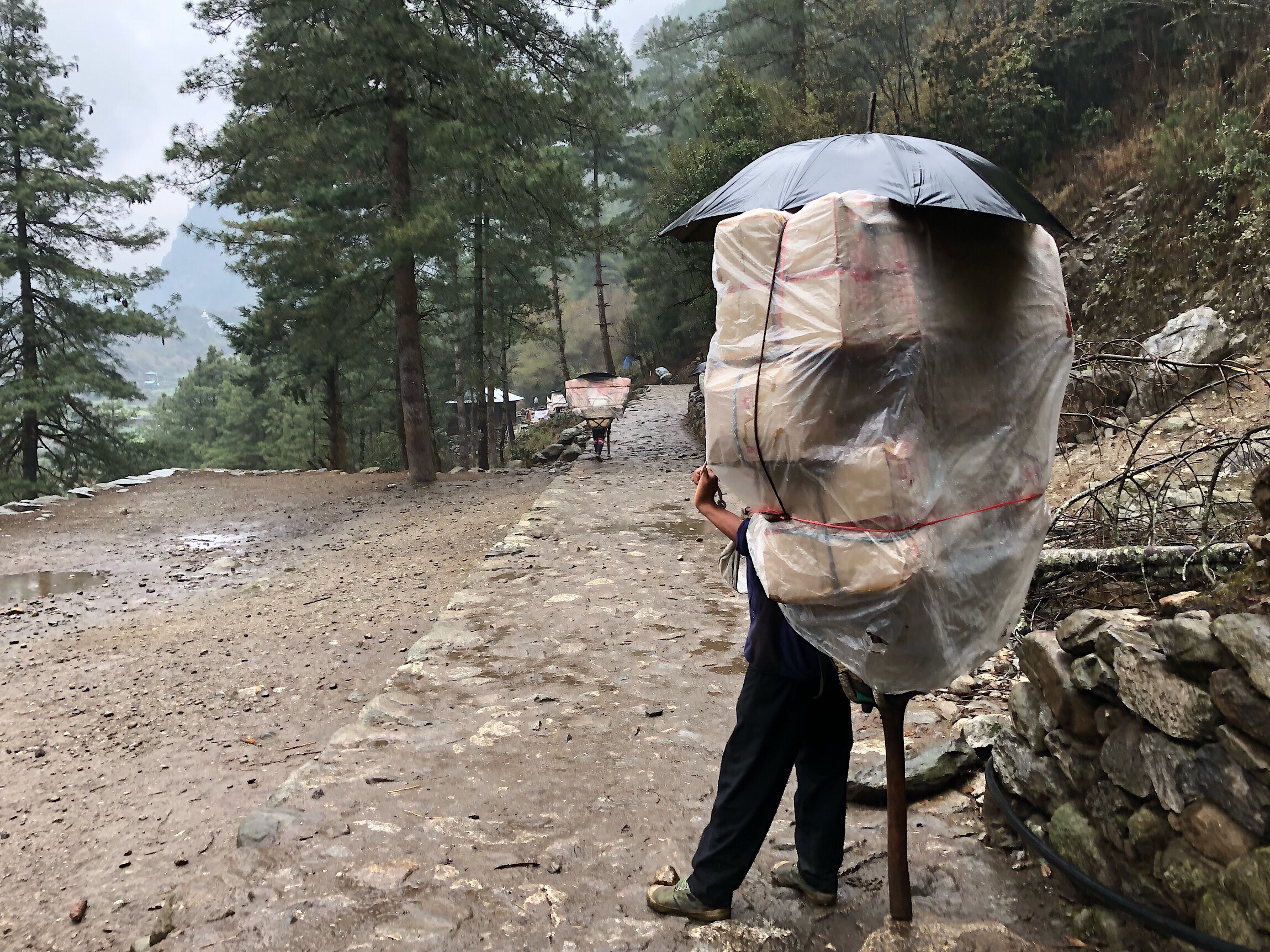 Fun to see how porters cover up in the rain and have their umbrellas on top and hiking sticks for support when they take breaks.

For those of you into specifics, Griggs will in no way claim this as a complete hike if he walks the rest of the way with us across Nepal. He wants to go back to complete the section he missed. This won’t be his last visit to Nepal, and he for sure has those miles on his list of things to do in the future. To continue his bad luck, two days ago, he got a horrible case of giardia. He was going to meet us in Namche, but had to stop in Phakding because he was so sick with diarrhea and vomiting. He’s on the mend after taking Tinidazole. Sorry, I was distracted and didn’t get a welcome back photo of Griggs. I did get one from a distance while eating in the dining hall. 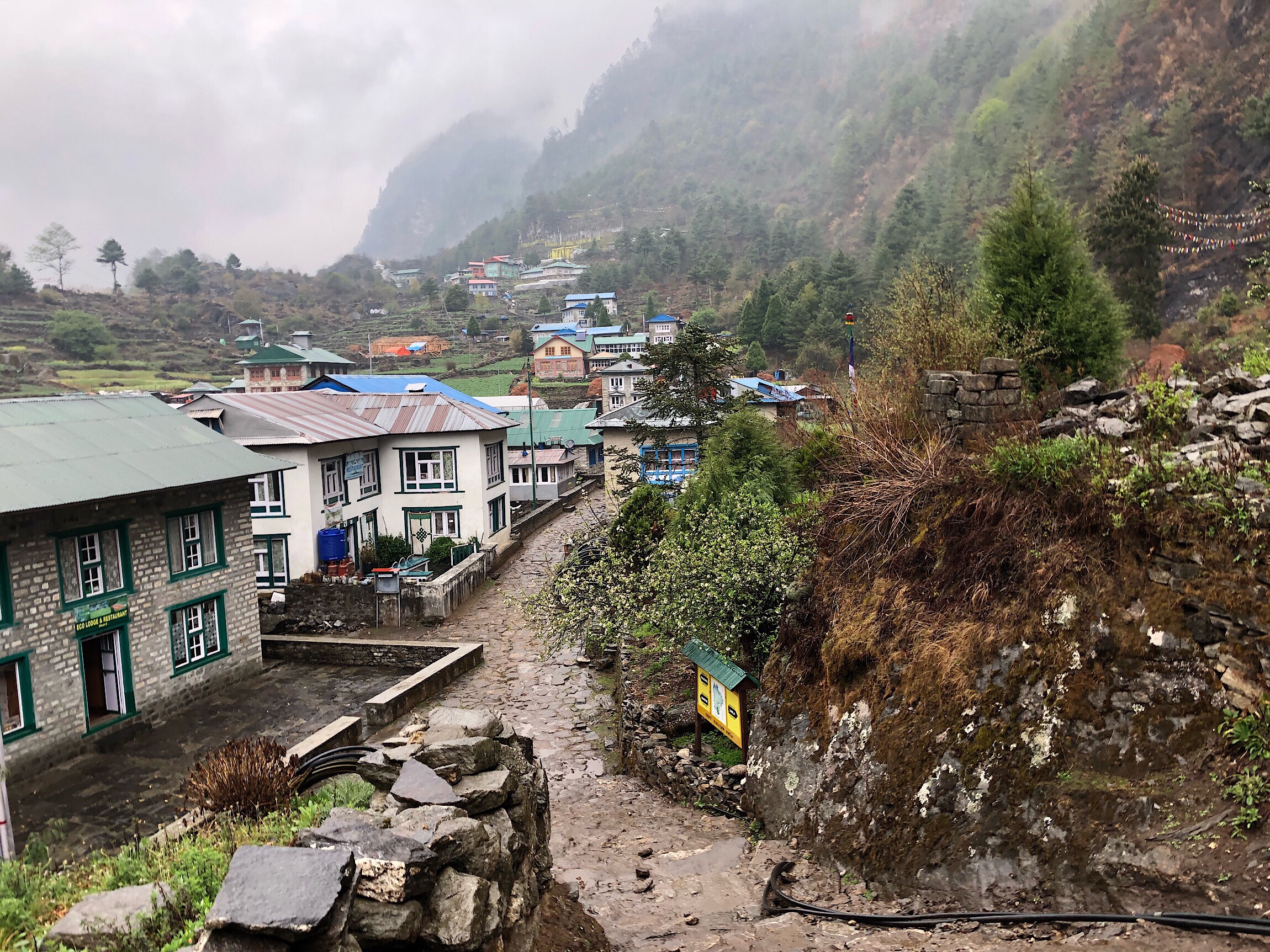 From Puiya to Phakding, there were constant services and guest houses like pictured above.

We stayed at the Buddha Lounge, and were lucky to be the only ones. They had a big crowd last night. Tomorrow, we have a morning hike to the bigger town of Namche where we will take a solid 24hrs to rest and recharge. 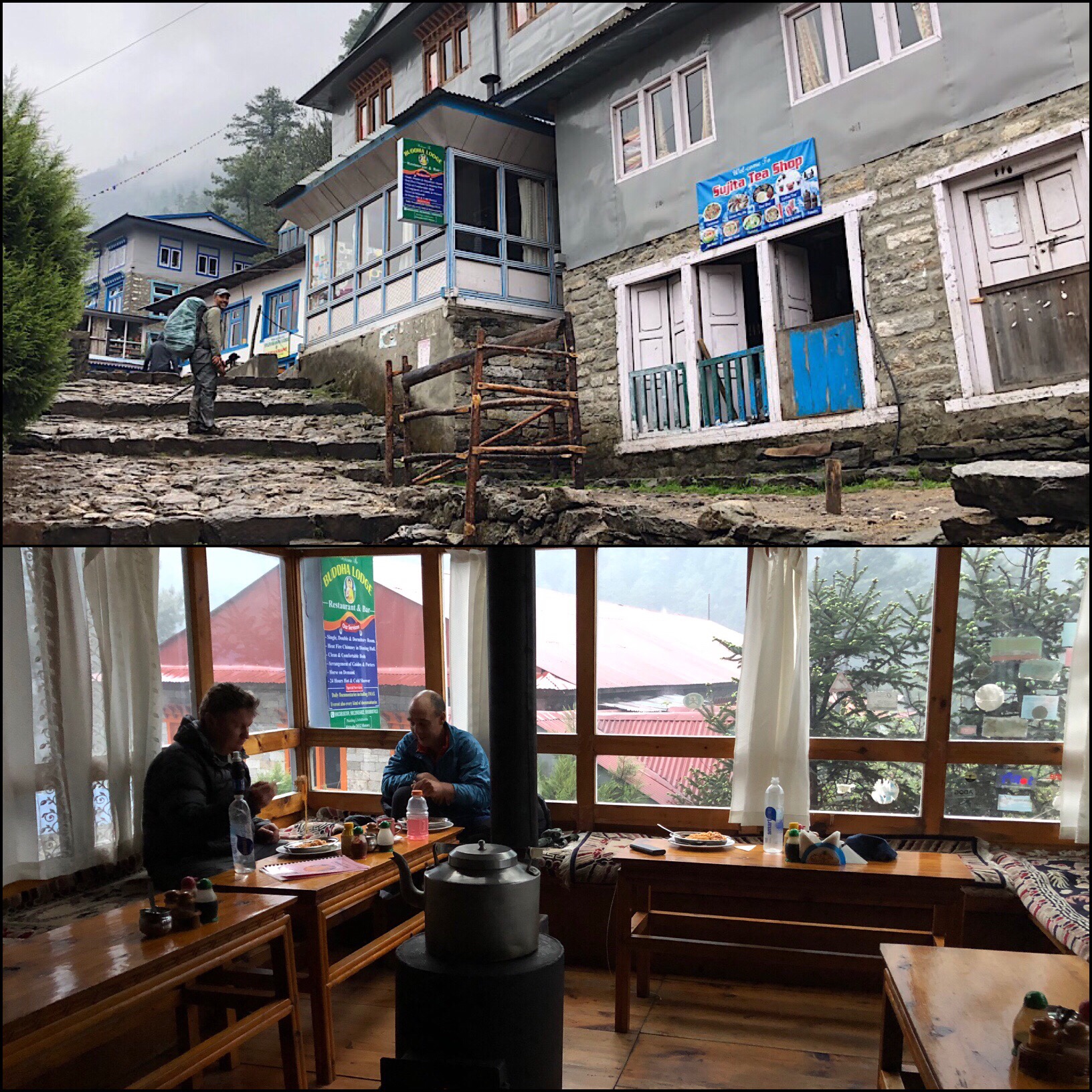