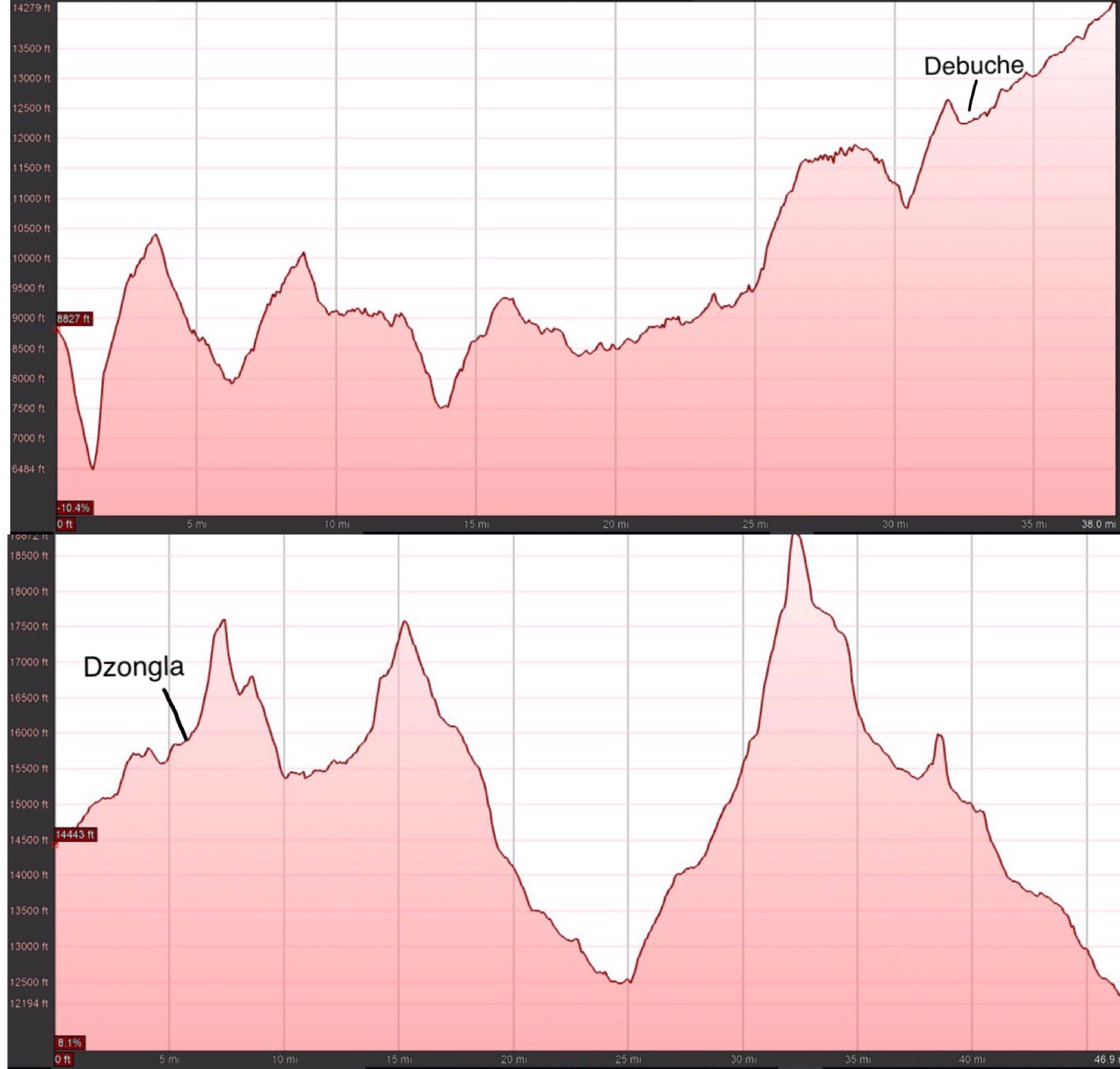 We got going by 6:15am, and had clear skies! It was a crisp cold morning, and we had a lot of uphill ahead of us. I mistakenly didn’t take Diamox last night. I thought I could make it one more day before I needed it, but was wrong. I had a slight headache when I woke up, which isn’t a good sign, and soon in the morning, could tell my body was not feeling it. Sloth mode with less oxygen up high. I took the Diamox pretty early, but it can take 24hrs or so to really get in the system, so I’m hoping tomorrow is better on that front. 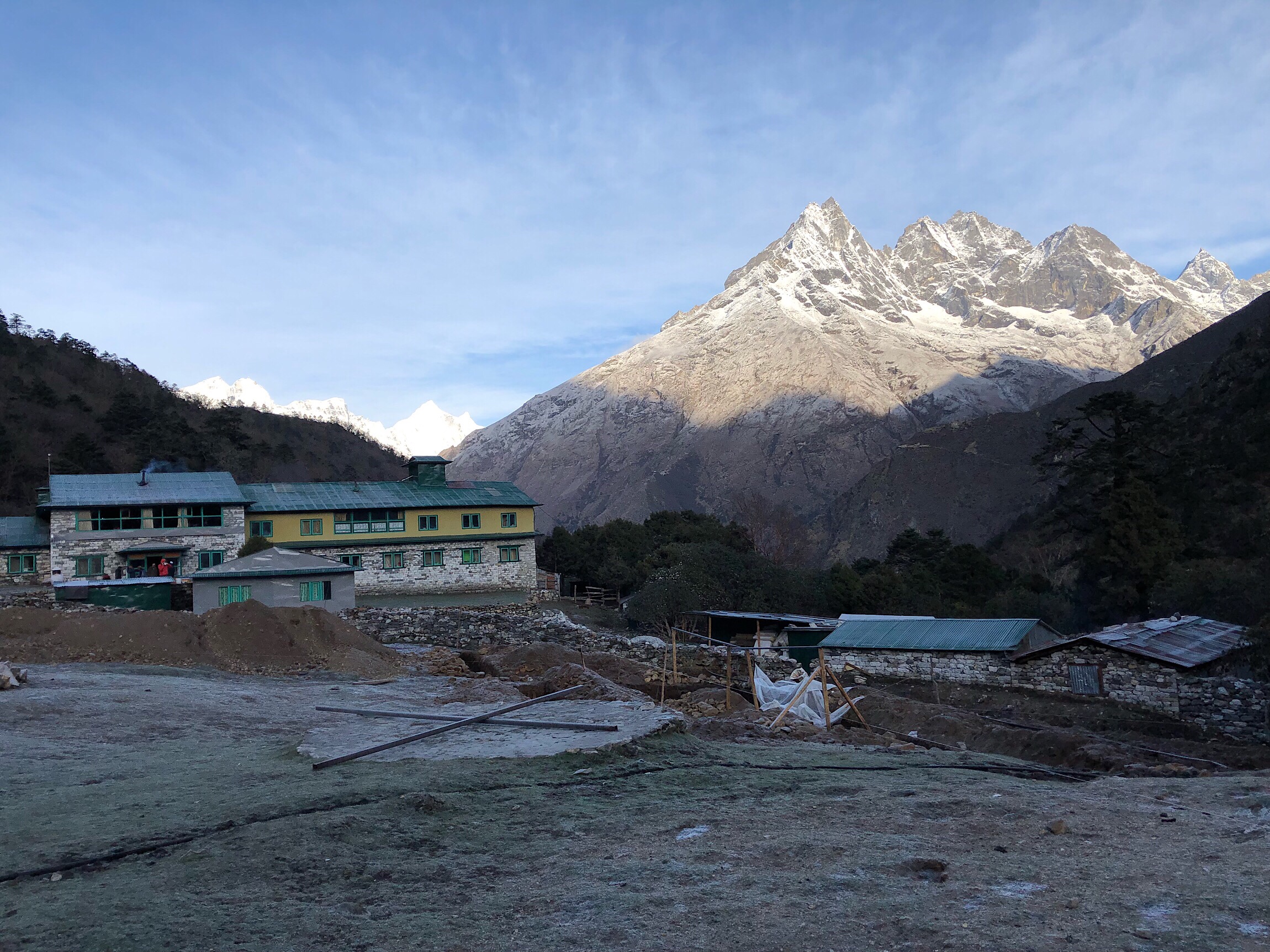 Clear morning view from our teahouse that was fogged in last night.

We had 11mi/18km to do today, and ended up 3,600ft/1097m higher at 15,928ft/4855m. That much elevation gain in a day isn’t recommended at these heights, but we were hoping we were still acclimated from when we did Kanchenjunga a couple weeks ago. The guys seem to be, but not me. 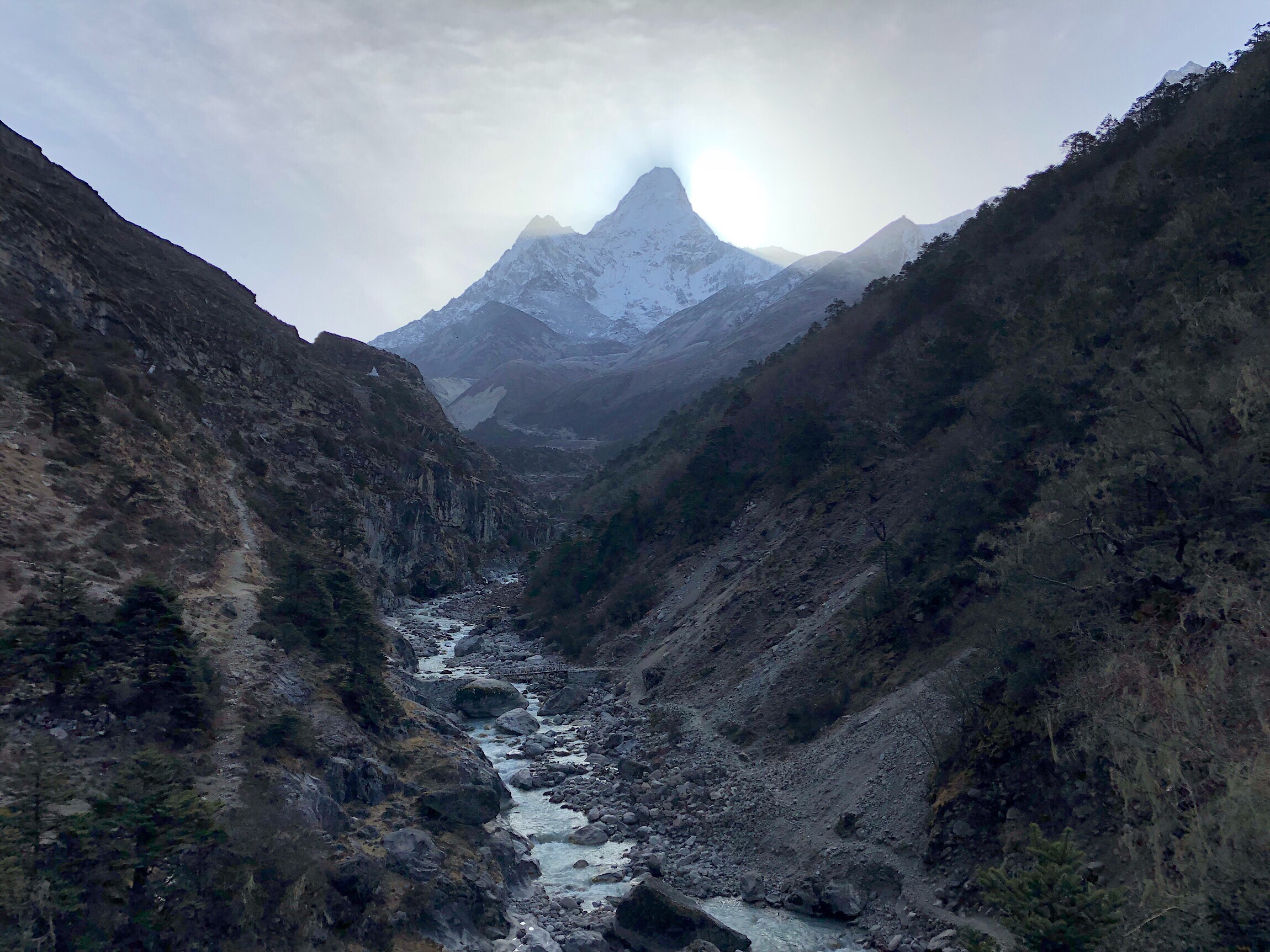 The views were great, and it paid off to get an early start. Few other were out the first couple hours of the morning. We are overlapping both the Everest Base Camp hike and the Three Passes hike, so there’s no lack of traffic. It was actually less than I imagined. Well, the true high season is Oct/Nov. This is still a high season, but the dang clouds come in almost every afternoon. 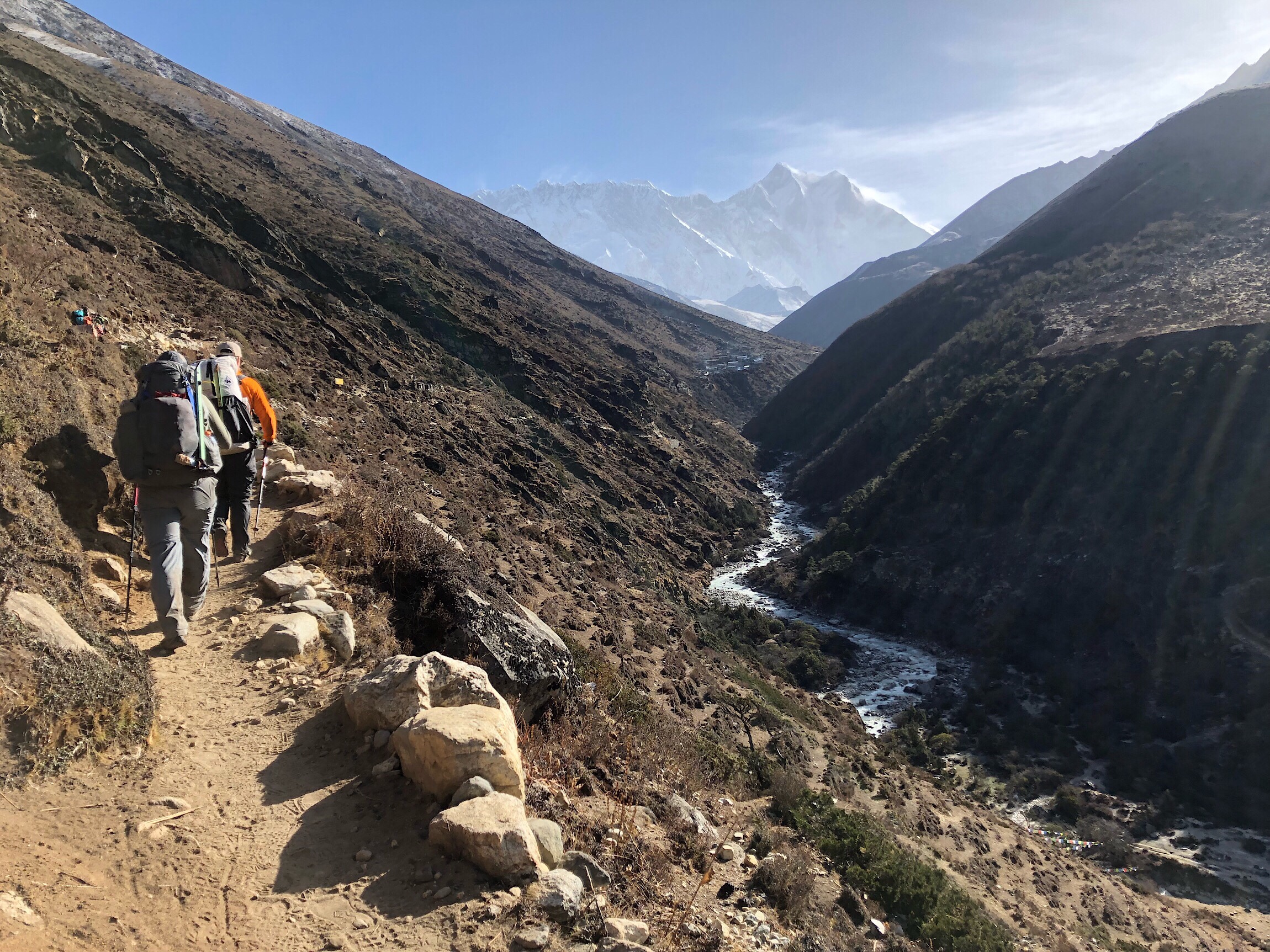 On the Three Passes Trek, our route will go over Cho La and Renjo La passes (in the coming days), but not Kangma La pass today. We chose not to take the extra couple days to do the Everest Base Camp stuff. Griggs has done it, Buck-30 is more about the experience as a whole and not having to hit the most visited places in a country, and I’m on the fence. I like to do side trips when there’s time and I’m in the mood, but I’m often turned off by things that people do just because everyone else does. Everyone we came across told us EBC isn’t anything great, but it’s more the sunset or sunrise at Kala Patthar. We are on a tight schedule, we know we should be getting views of Everest, and just aren’t feeling the pull to make that side trip. Our momentum is going so well, and it just isn’t feeling right. I know so many will be appalled that we came so close, but we are seeing so much already and feel like the cup is already full. There’s always future trips to return and do a more relaxed trip up there with friends. Thru-hiking is just a different kind of experience. I feel like I’m getting a great feel for all aspects of Nepal walking the length for 3 months. It’s less about the big views sometimes.

We did have great views today though! We got to Dingboche earlier than expected at 10am, and had lunch. Well, we had been hiking for 4hrs. It was a great spot for views with a wrap around window. Again, my hunger is still high. I had a pizza. I could get used to this type of hiking with teahouses and great food around every corner with views. 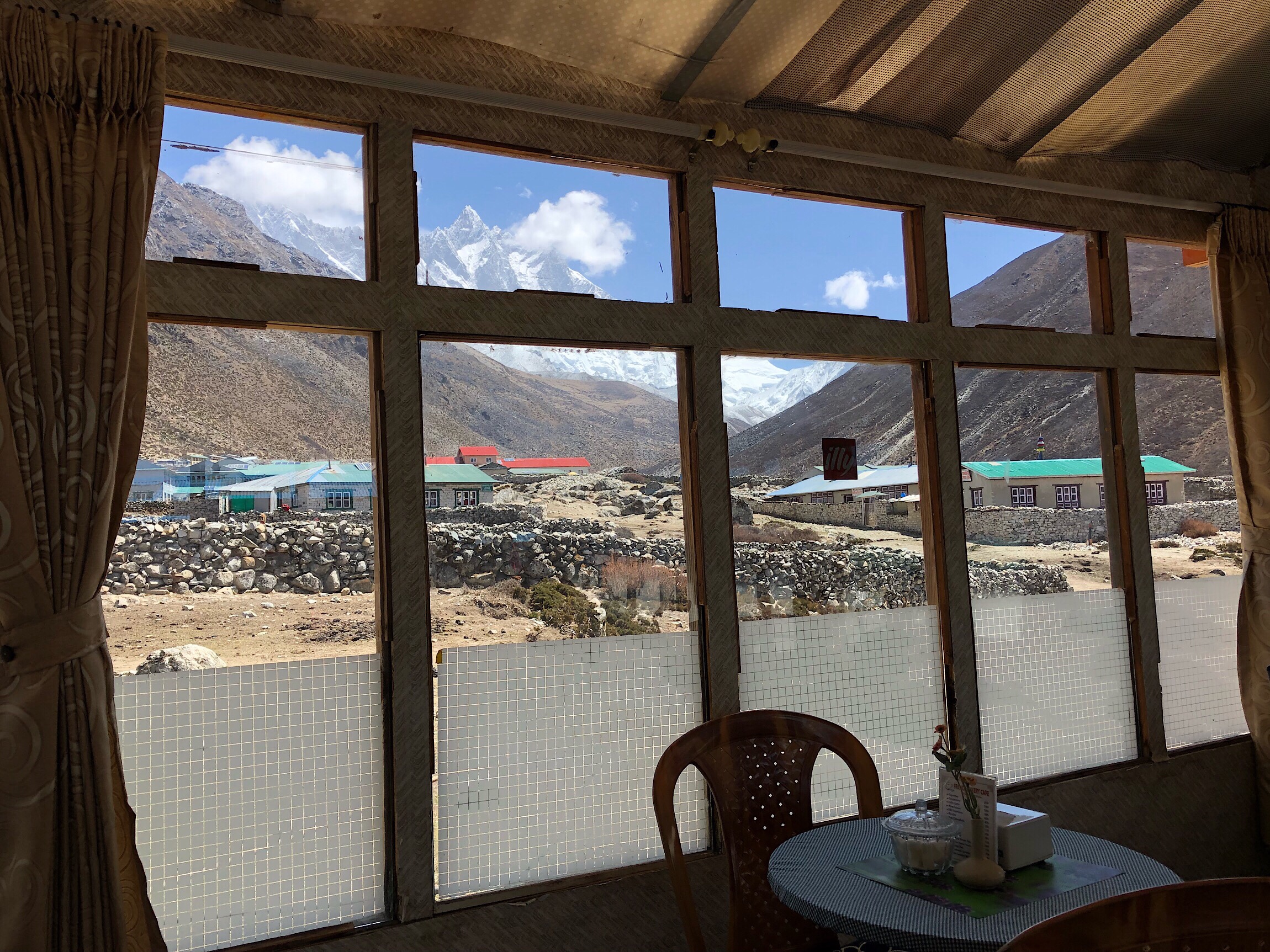 After lunch was a nice stretch across a plain with mountains all around us. I was still feeling the elevation and a couple minutes behind the guys consistently. 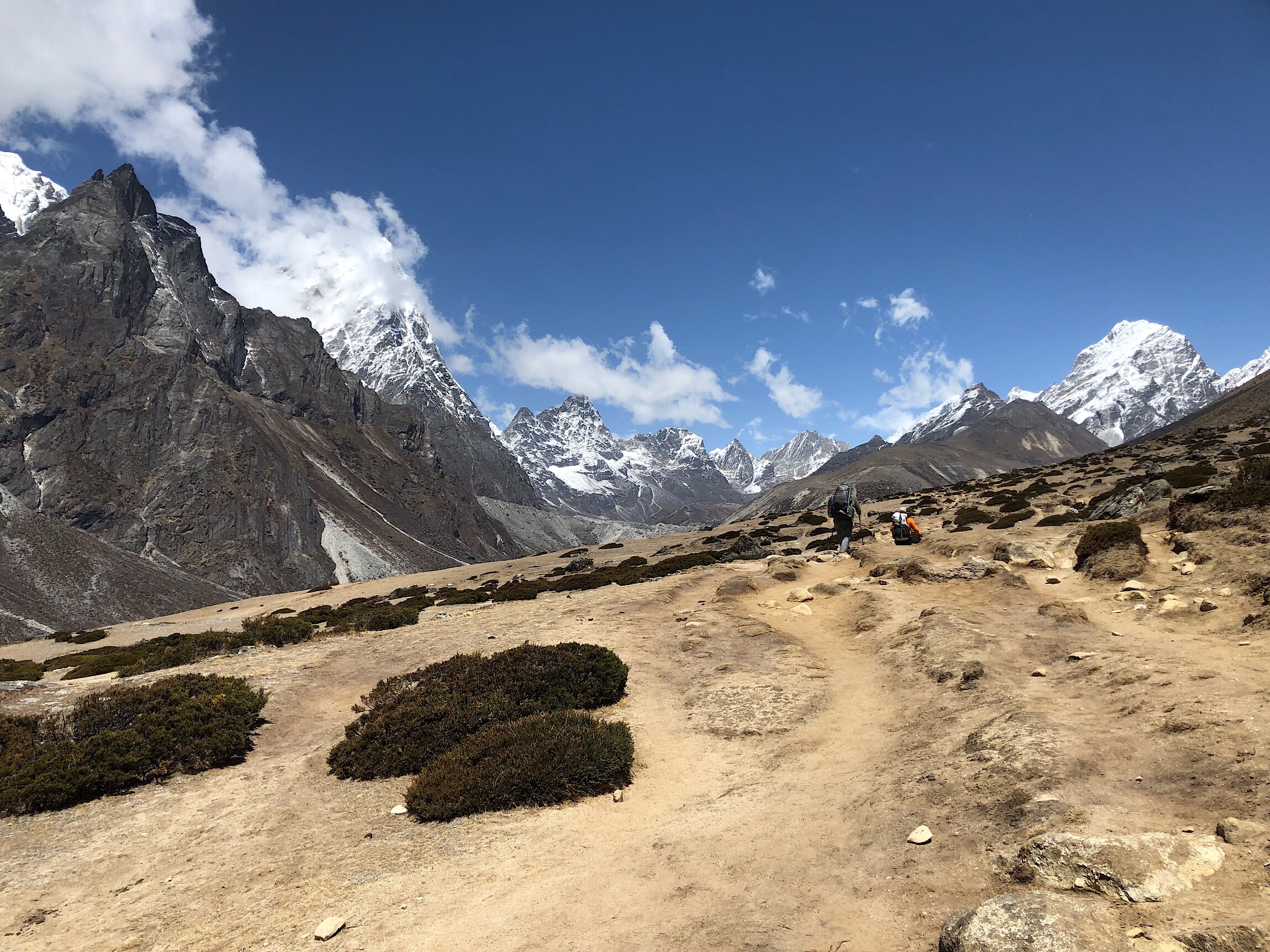 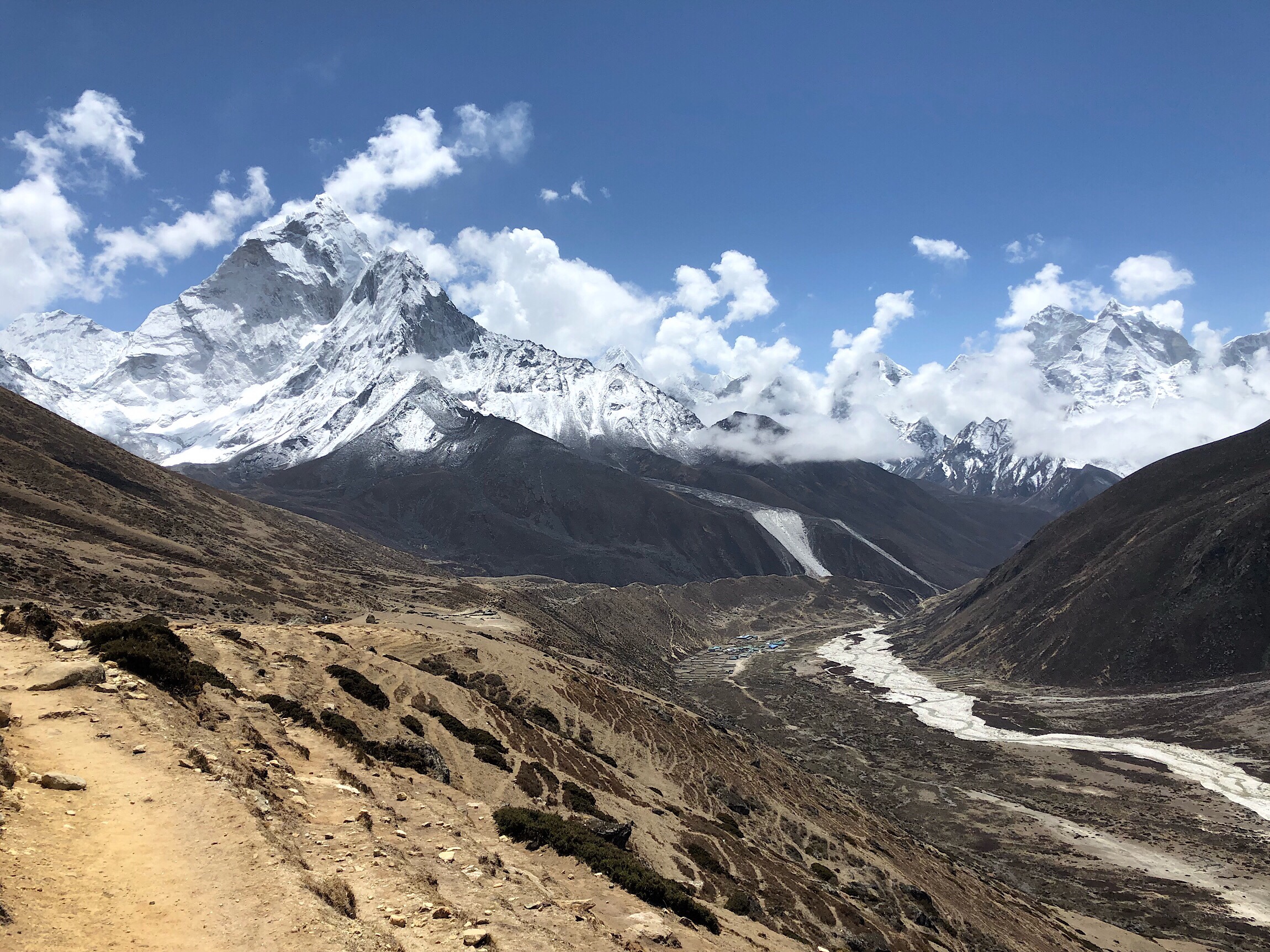 We got to Thukla at noon, and could’ve relaxed a bit longer, but the dang clouds moved in quick and it got COLD. 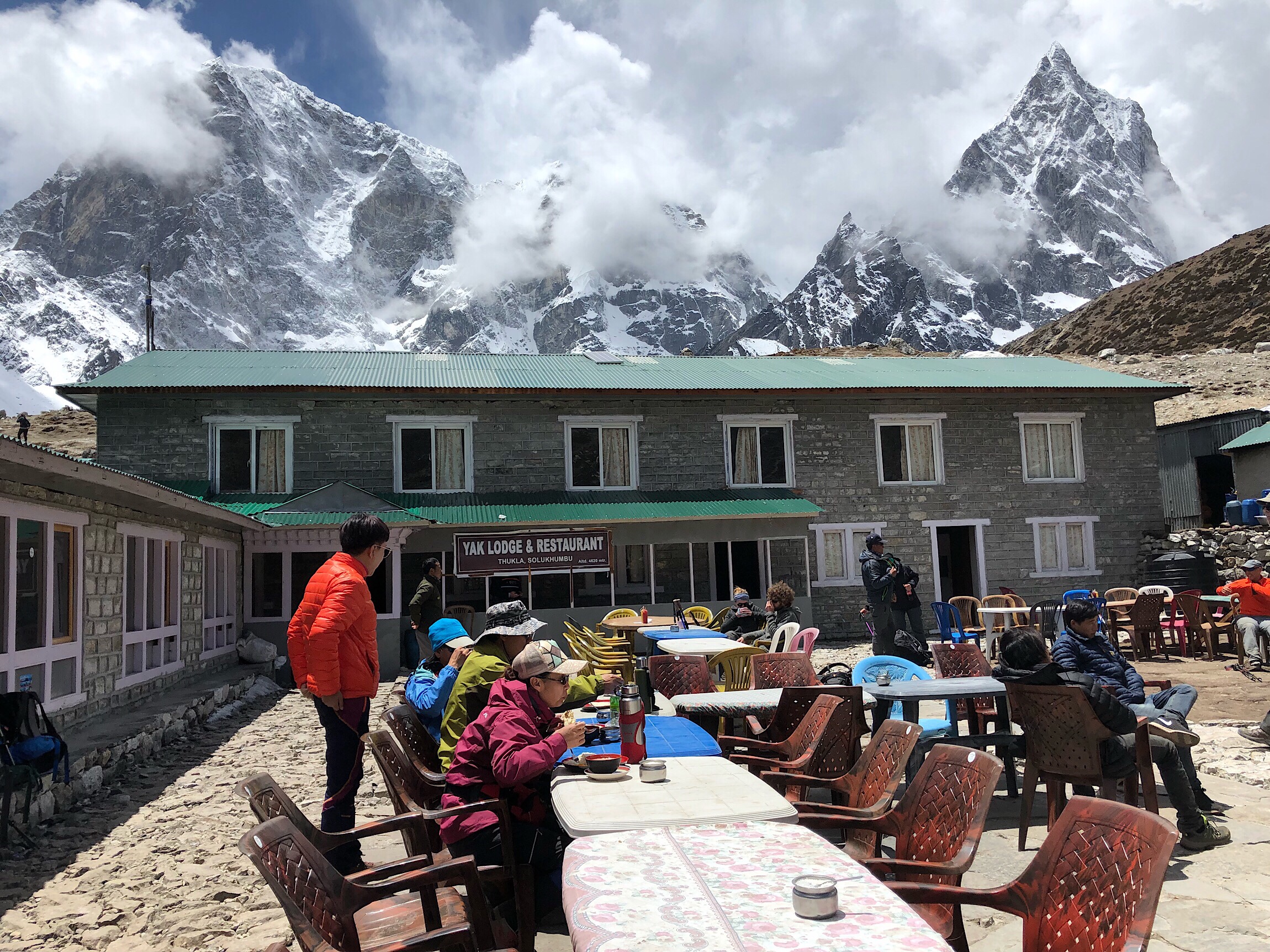 We hiked out and headed to our final destination, Dzongla. The clouds came down and covered the tops of the mountains unfortunately. 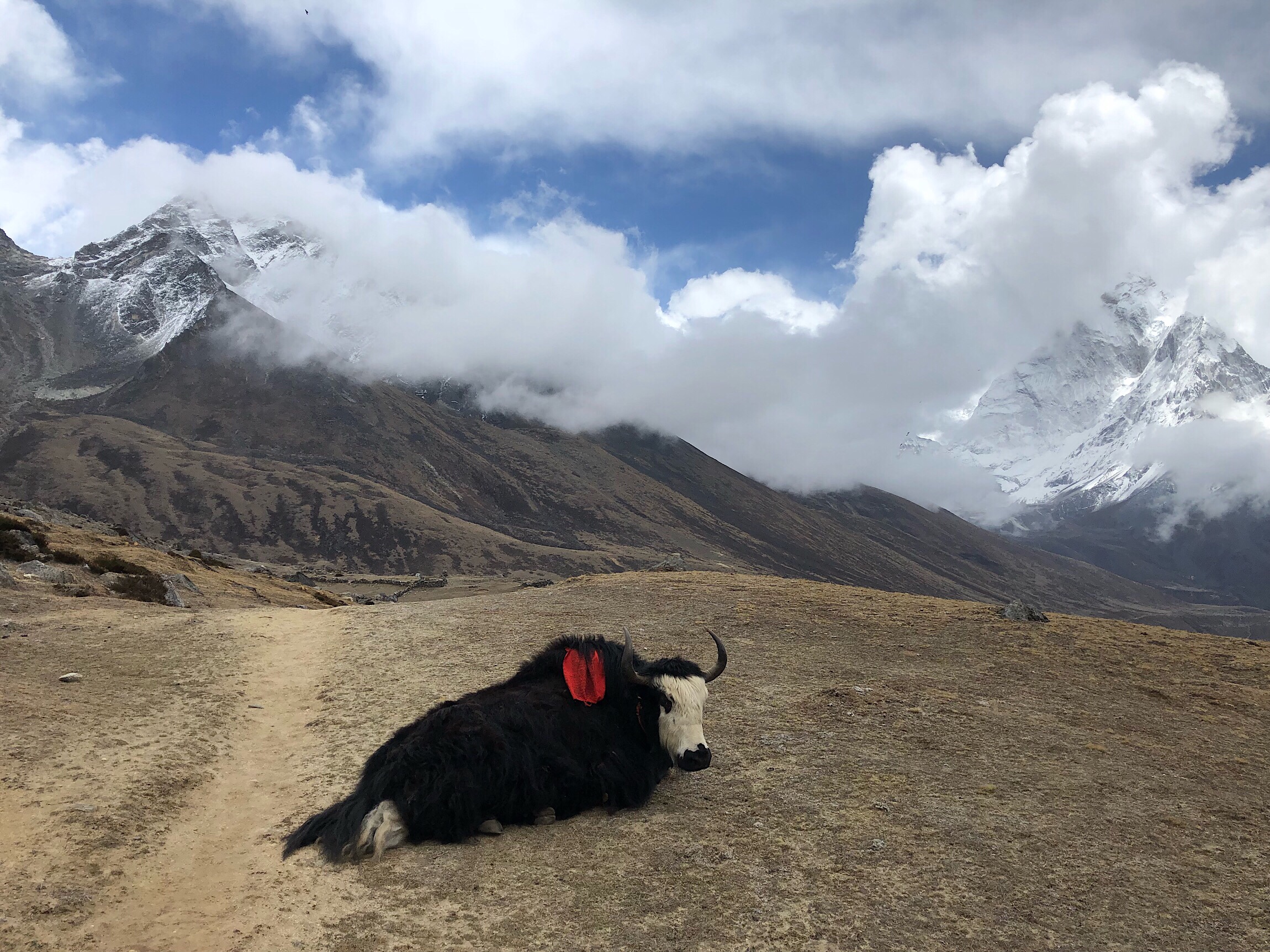 We got to Dzongla by 2pm, and I was wiped out. At 15,928ft/4855m, this is one of the highest places we’ve spent the night. I have a slight headache and am not sure if it’s just the elevation or a combo of things. I’ve had less sleep with the town stuff and more cell reception. I’ve been up later trying to get things posted. Also, with my eyes looking at the screen so much, I think that’s not helping. I’m hoping I’ll feel better tomorrow. We are still going up quite a bit higher tomorrow to get over Cho La at 17,500ft/5334m. We’ve decided to start an hour later, yay! 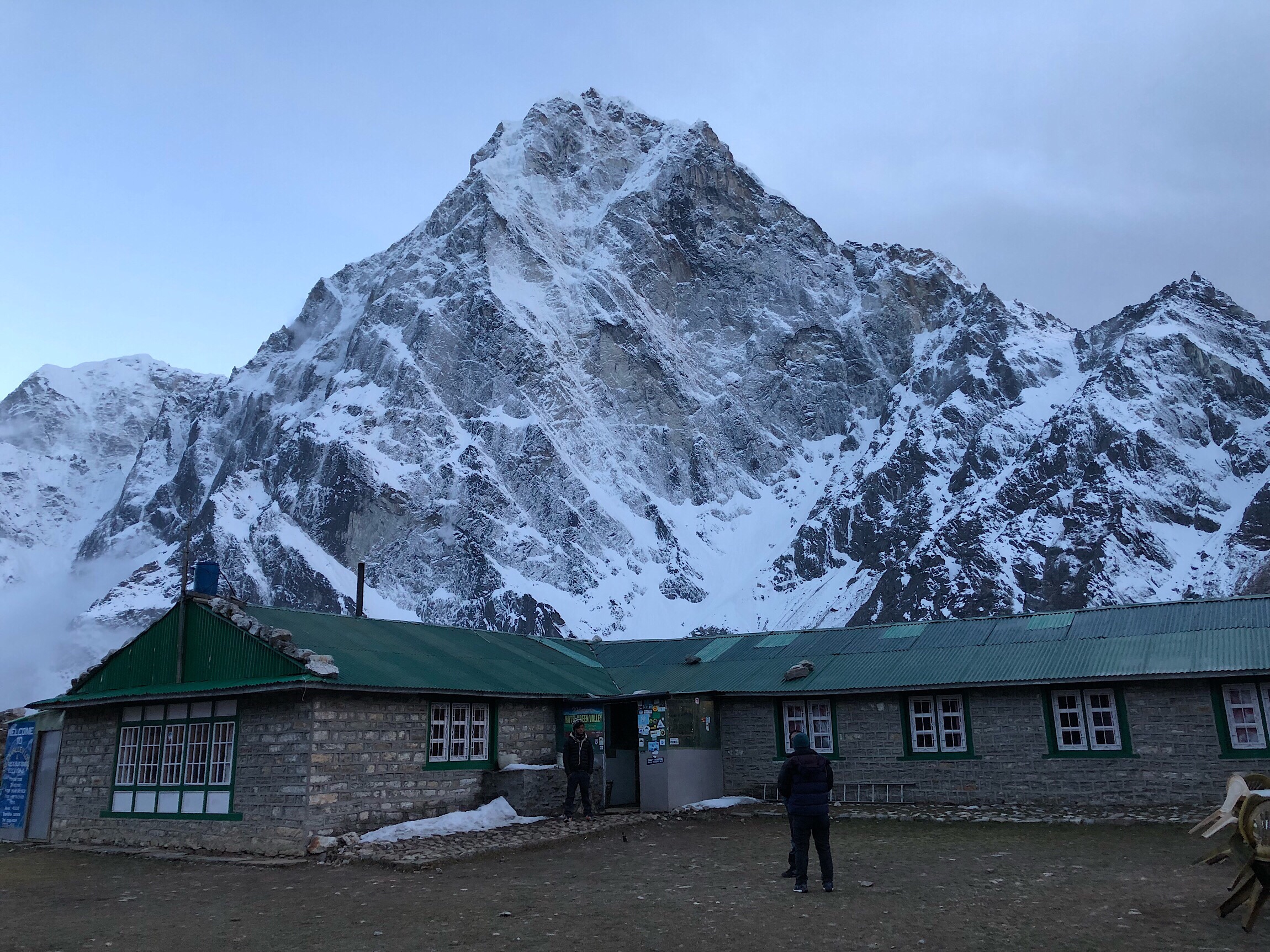 Clouds lifted as the suns went down and mountains appeared all around our guest house, Green Valley Hotel.