I did start my period overnight, and had a very tough time getting out of bed this morning in my very cold room. It was below freezing outside when I set off at 5:45am to hike Gokyo Ri to hopefully get my first view of Everest. The air was crisp, and the sky was clear. I was tired, but knew I had to take this opportunity to do this side trip. 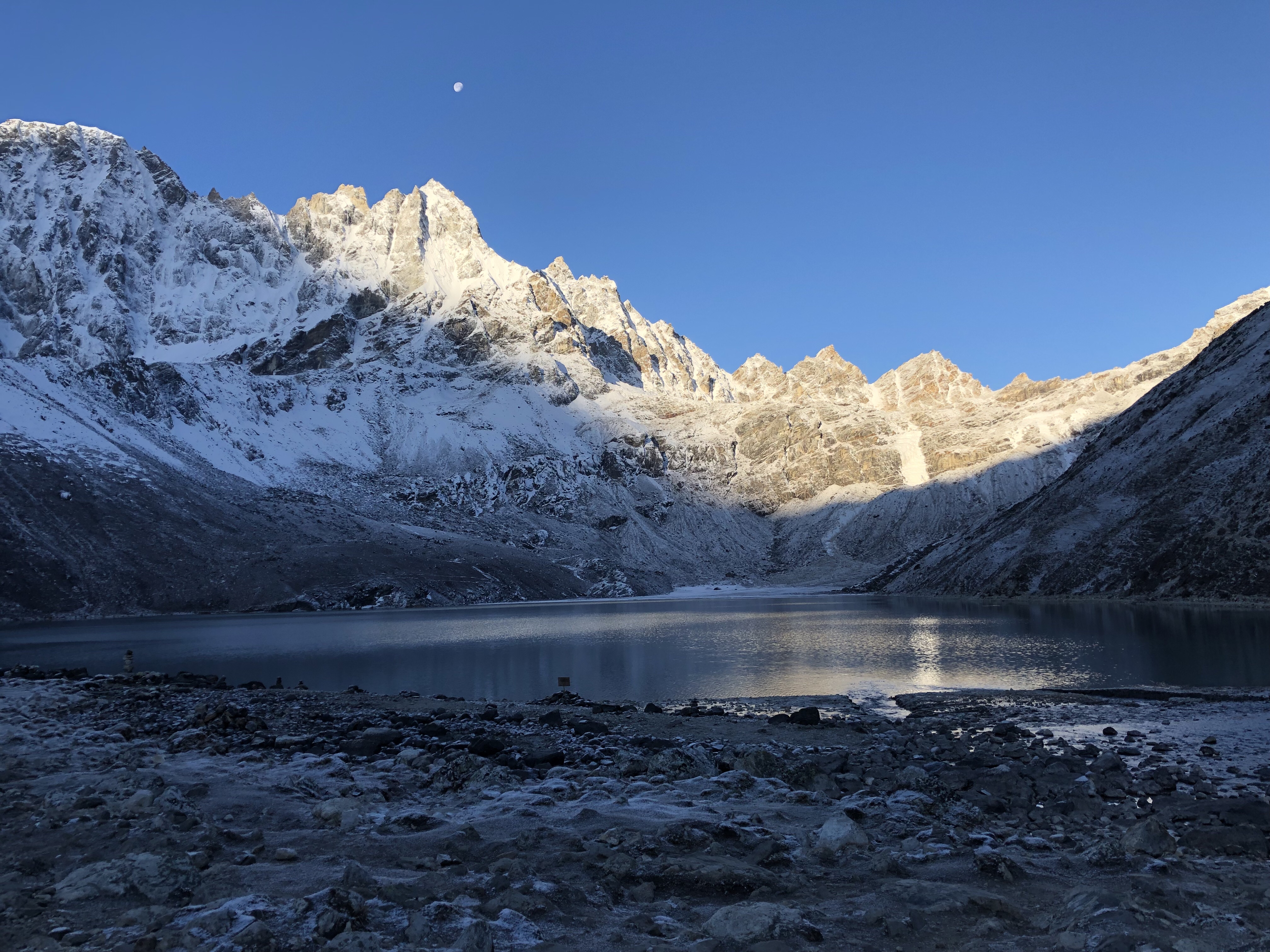 Morning light hitting Gokyo Lake with the moon still over the mountains. 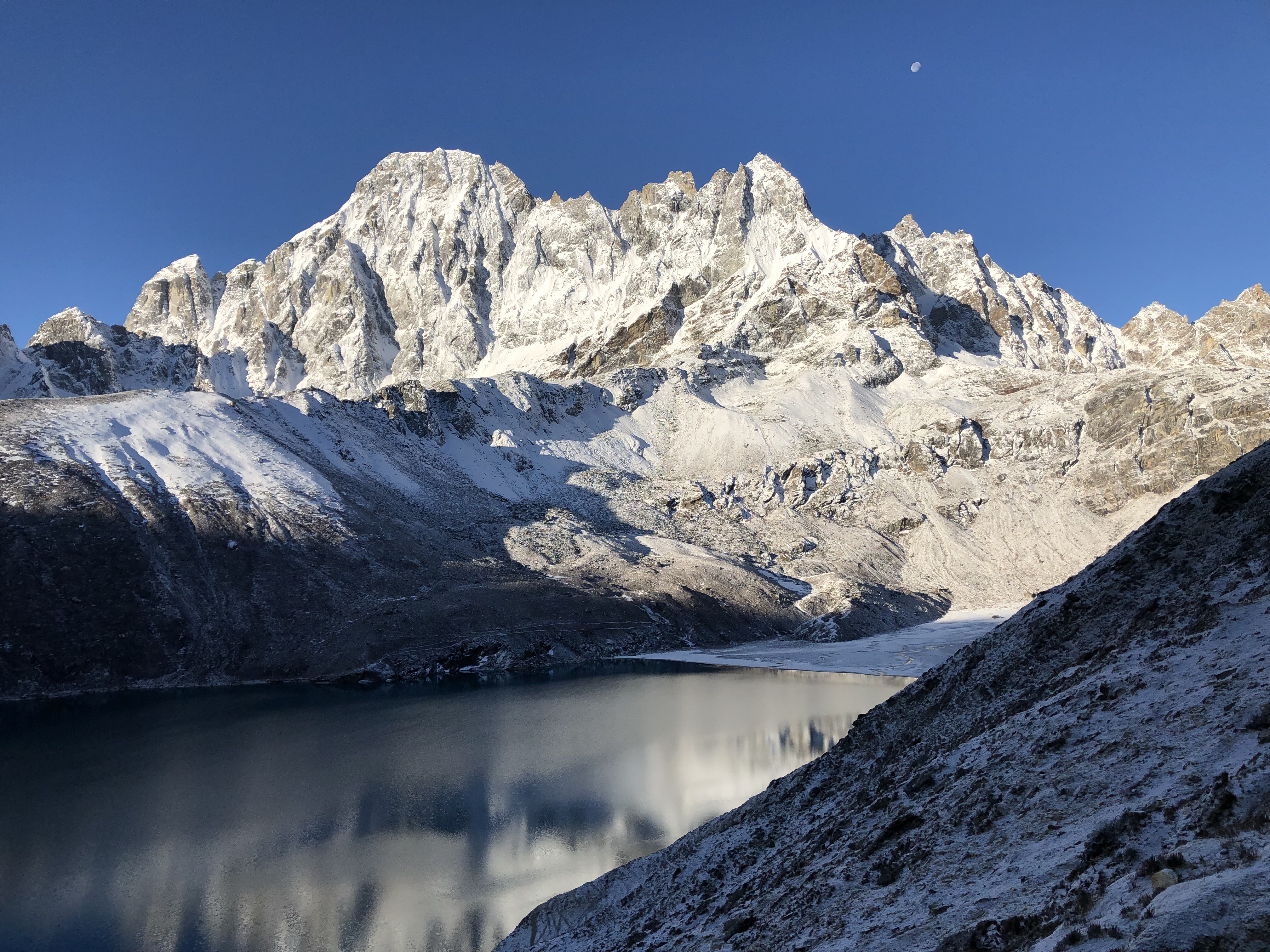 As a reminder, Buck-30 and Griggs are back one village, just 2-3hrs away. Both sick with stomach issues, and planning to hike here to Gokyo today for a day of rest, which we all could use. The stomach stuff is horrible for them, but aligned to allow me to do this side trip. Gokyo Ri is a 2,000ft/610m climb pretty straight up, and takes most at least 3hrs to do. It tops out at 17,585ft/5360m. 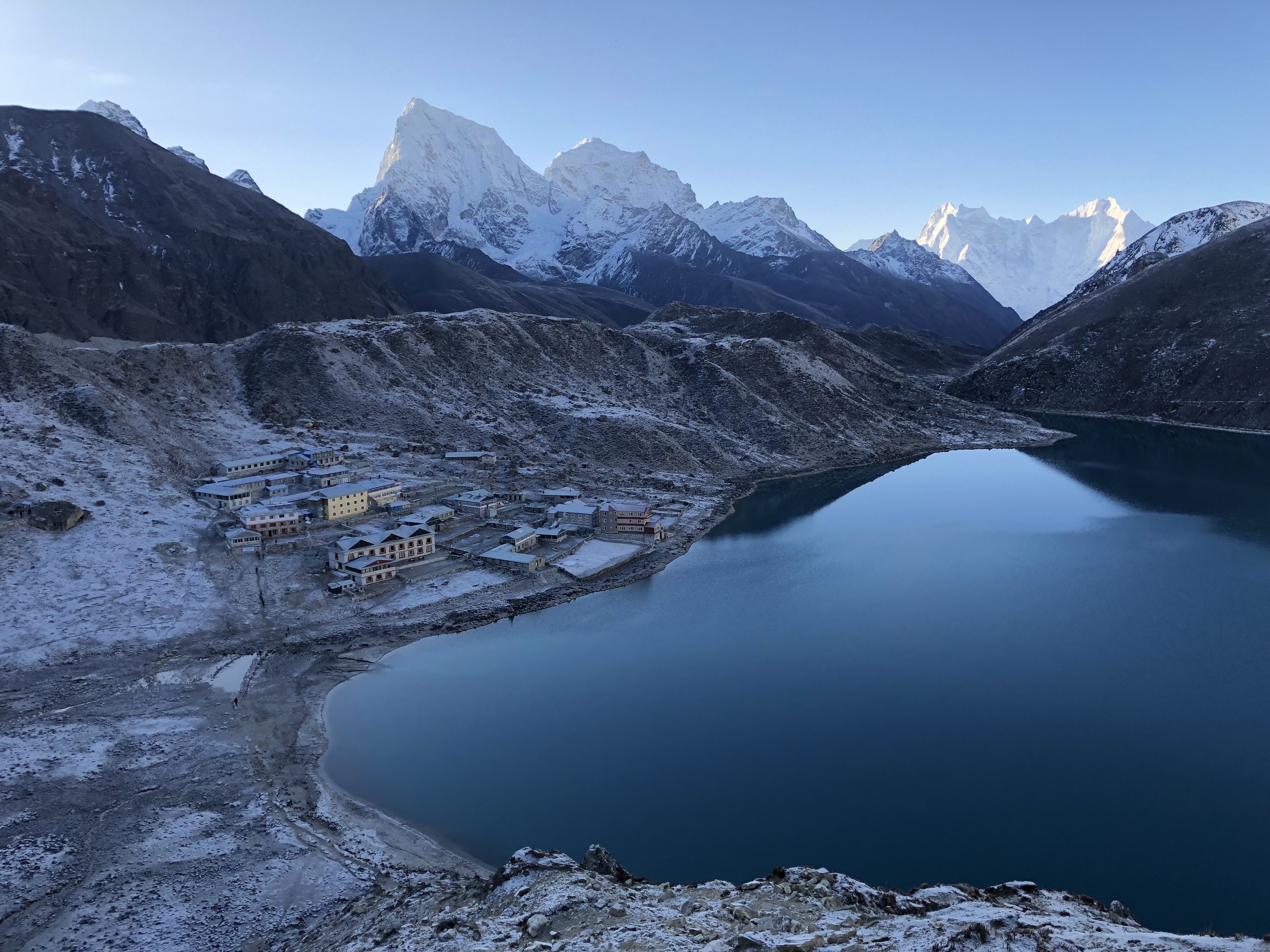 Looking down in Gokyo.

It was nice to finally do one of these steep high elevation hikes without a full pack on. I was still a slug, but a faster slug. Doing this as a day hike really gave me time to just soak it in and really absorb what I’ve done so far. It can be tough to do that on a thru-hike like this that is fairly relentless. 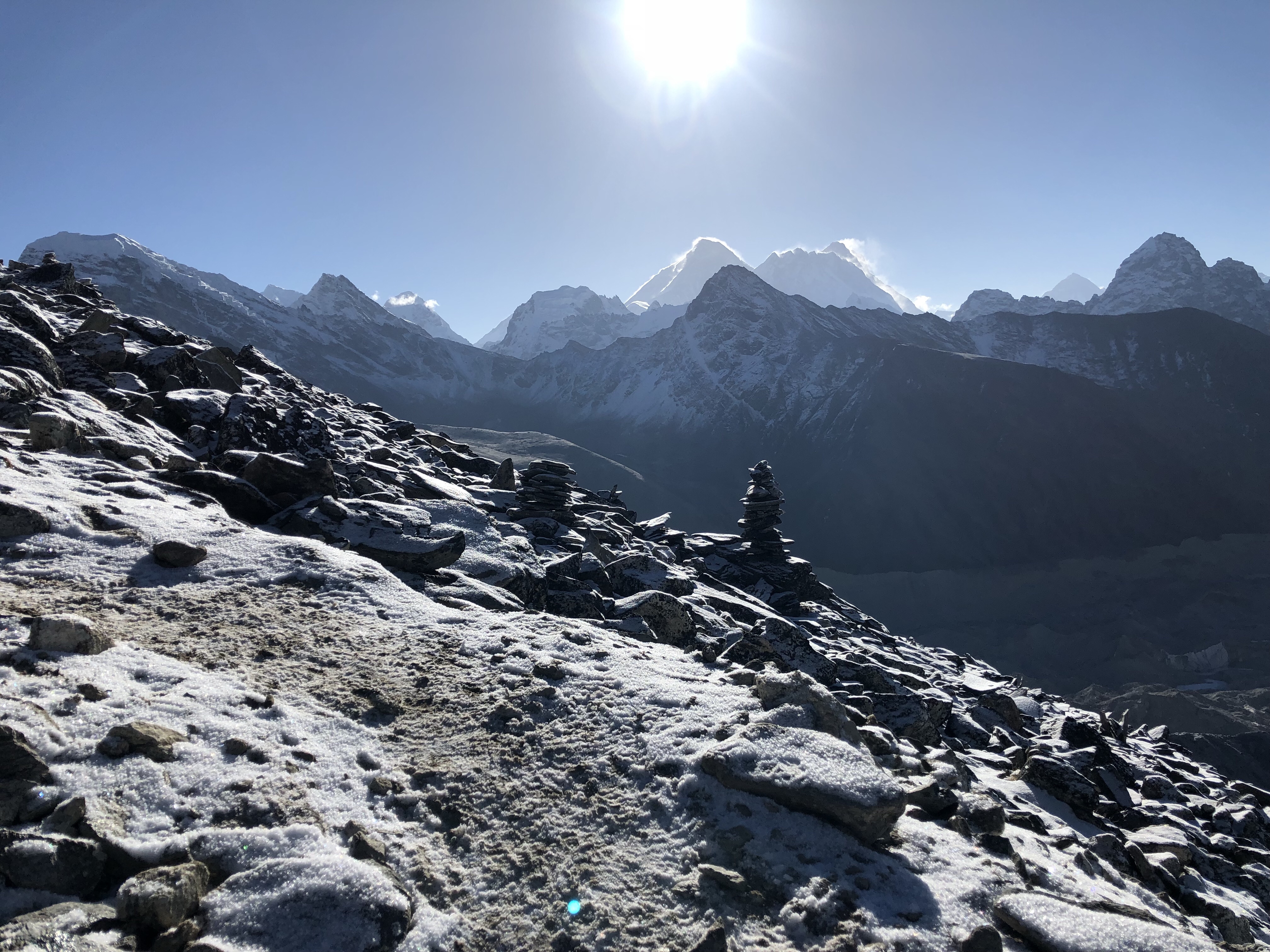 That’s snow covered Everest in the center, under the sun peeking out over the nearby range. 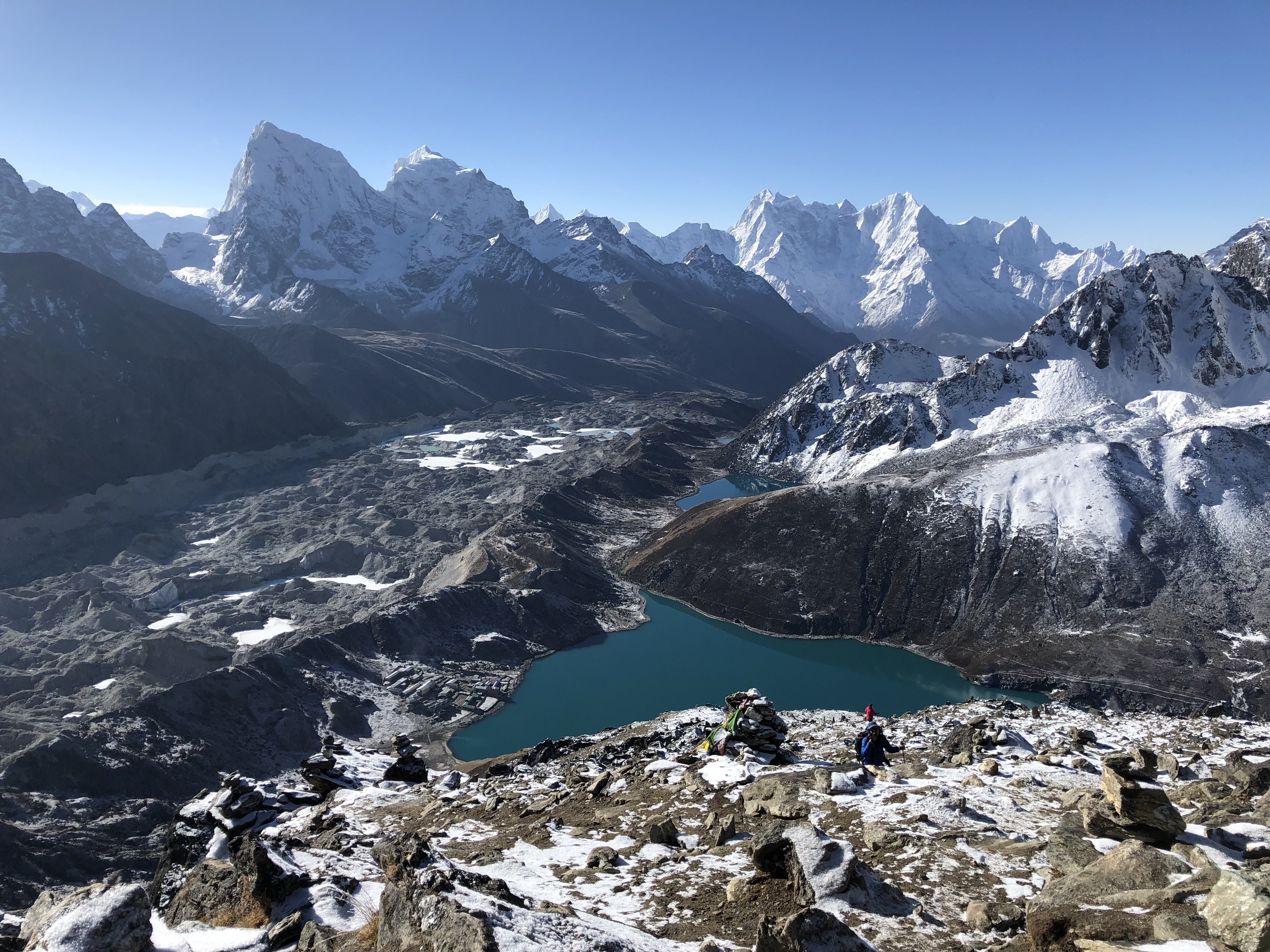 I made it up in 1.5hrs, and had to ask which one was Everest to make sure. I know people are going to ream me for saying this, but I just don’t have the attachment to Everest to get as stoked by it as others might. Oddly, I’ve just never been able to connect to mountaineering. Seeing Everest to me is like asking someone who goes to visit America if they saw the Statue of Liberty. You go and see it, which you could see a photo of anywhere, but it’s not what defines America. It’s all the cultural stuff you get from experiencing the full spectrum of everything from big cities to small towns to national and state parks. I don’t know if it makes sense. All I’m saying is that seeing Everest was nice, but wasn’t a must do on my list in Nepal. It was a nice bonus. 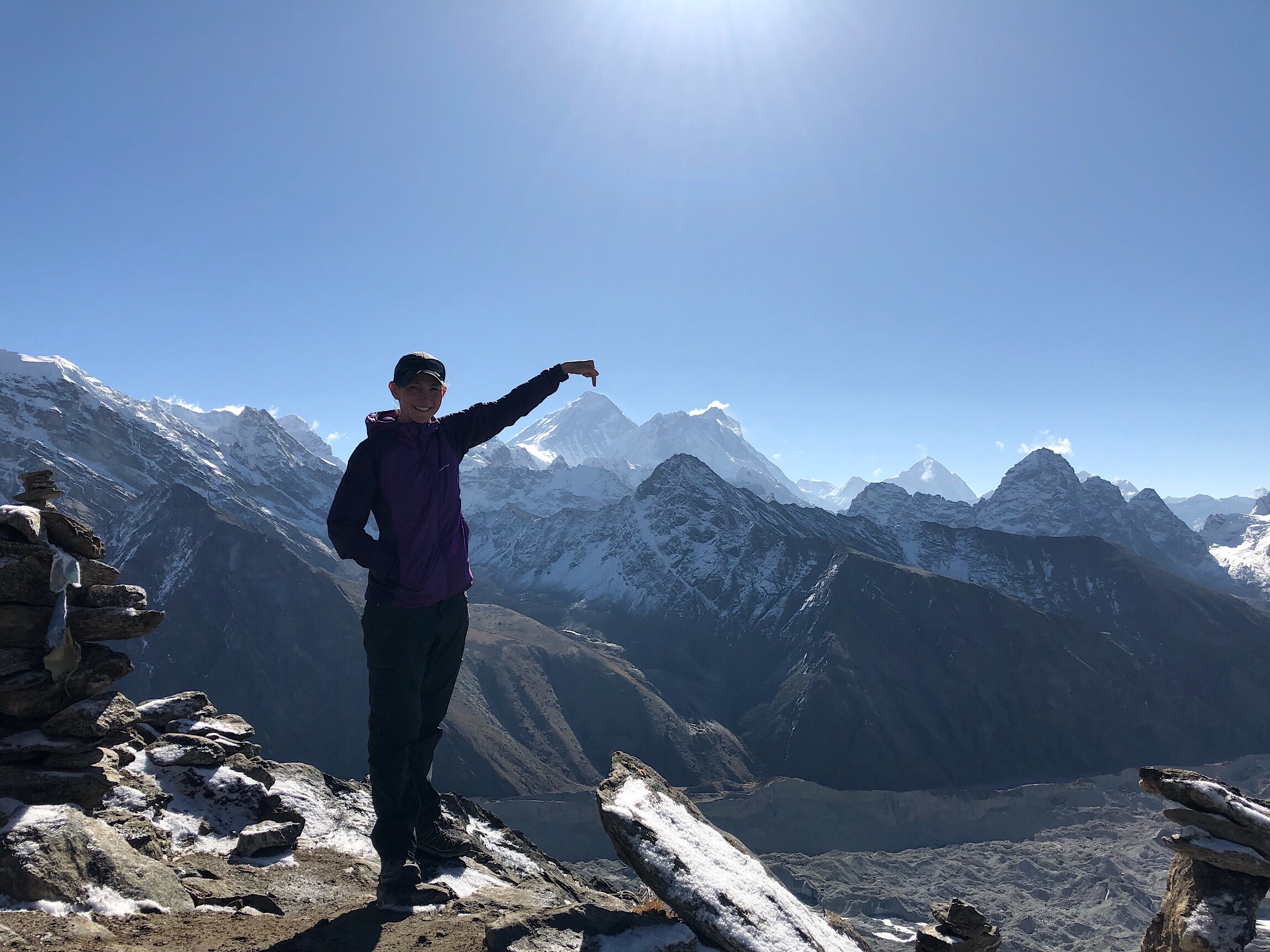 What I liked even more was just having time to relax and take this whole experience in. It’s a stressful hike, and it was good to remember how much I just like hiking. Today was free of a push that’s always there on the GHT. Just a day to breathe a bit. 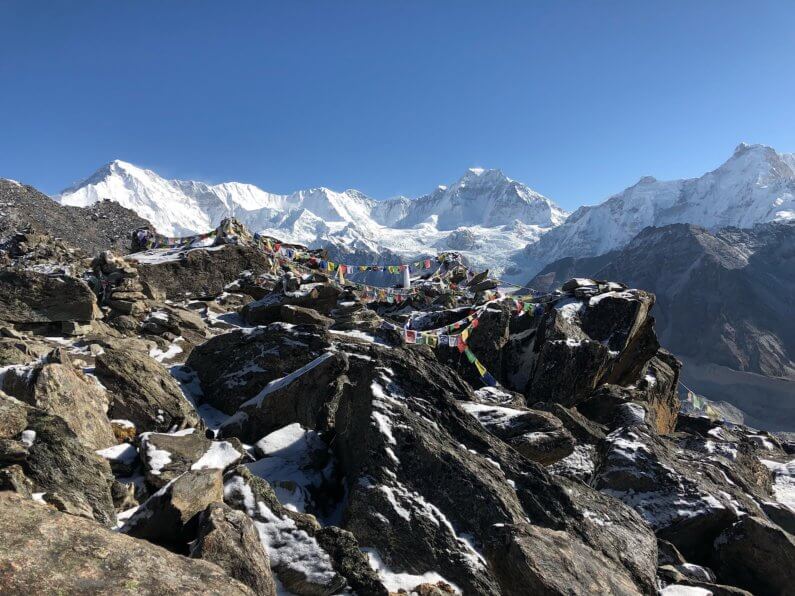 I stayed up top for an hour. There was a group of young Israelis who were fun to talk with, and I just took it all in. It was remarkably nice up there in the sun.

That’s Everest poking up in the distance on the left. This view also shows Gokyo down by the lake. Just behind Gokyo is the glacier I crossed yesterday, and even the village of Dragnag where Griggs and Buck-30 were. I could see the dang lakes that dead ended us yesterday as well over by the patches of snow in the distance on the glacier. On the way down, Gokyo Lake was emerald in the sunlight and much different from the royal blue of the early morning. A cool change. It took me 50mins to hike down, which was fun. Again, another view of Gokyo, the glacier above it, and further in the distance, I can see Dragnag, where Buck-30 and Griggs are. 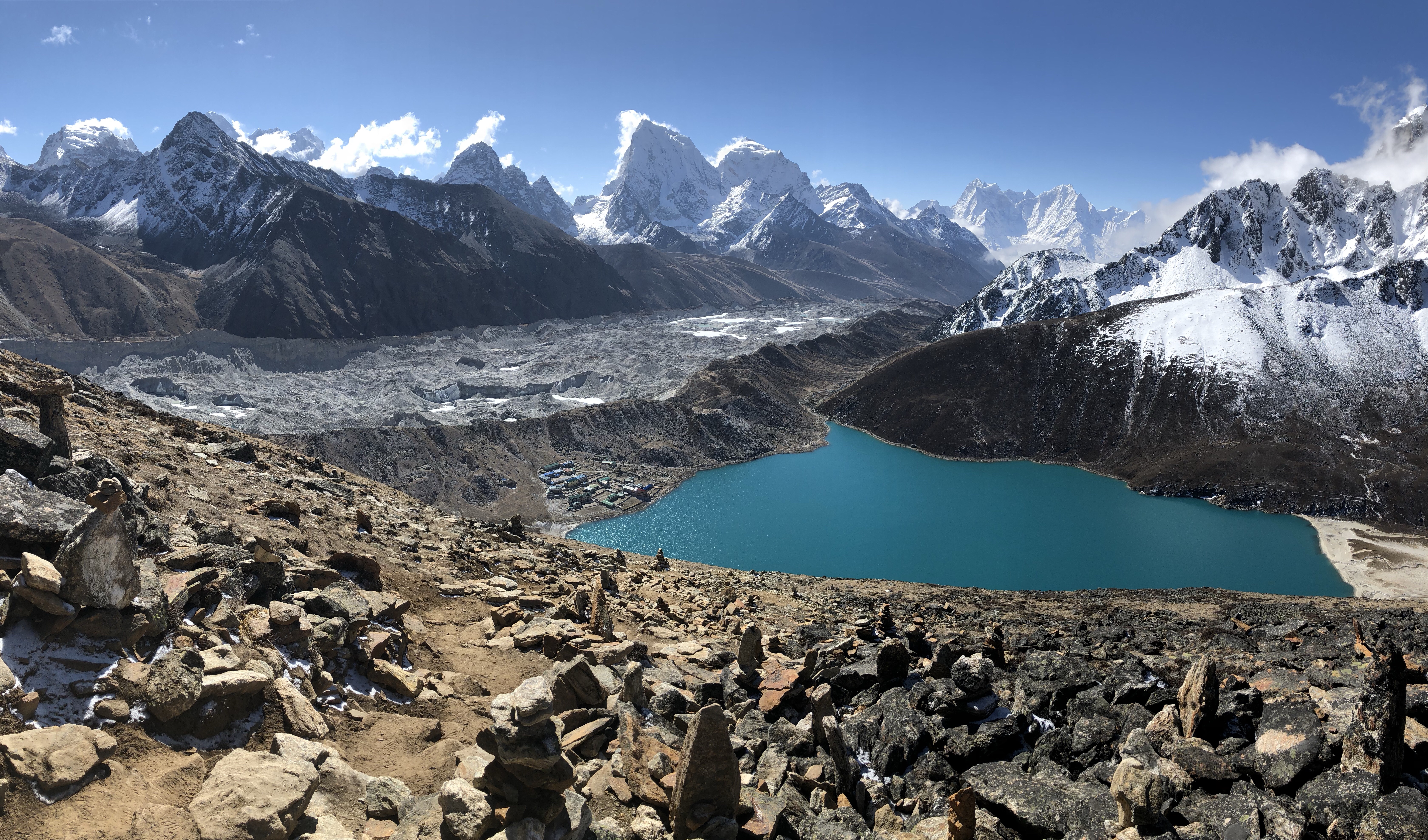 When I got back, Buck-30 had arrived and was feeling tons better. Just needs to get food back in his system. Griggs came a few hours later. He was just as depleted as yesterday. This is horrible for him! He definitely has something, or a combo of something, that the antibiotics aren’t curing. There is no way his body can continue like this. He is just 3-4 days of hiking from the Lukla Airport, and has made the right decision to fly home. Very disappointing and frustrating for him, but he’s given it such a strong effort after almost a month of sickness. If it were me, I’d have flown home a week ago when he got really sick for the second time. It’s a bummer, but we knew this was a factor of this hike that could still get the remaining two of us. Griggs has been to Nepal before and will return again. He still has big plans to continue hiking until he doesn’t want to anymore. Just give him some time to get home and recover, and you’ll see him back out doing more thru-hiking.

When Griggs arrived, the Gokyo Namaste Lodge gave him a room at the Fitzroy Hotel for the same $2 price. It was freezing and packed at the Gokyo Namaste, so we all three moved to the Fitzroy for the rest of the day. It was so much warmer and less crowded. Still plenty of bustling around and noise outside, but much more comfortable. 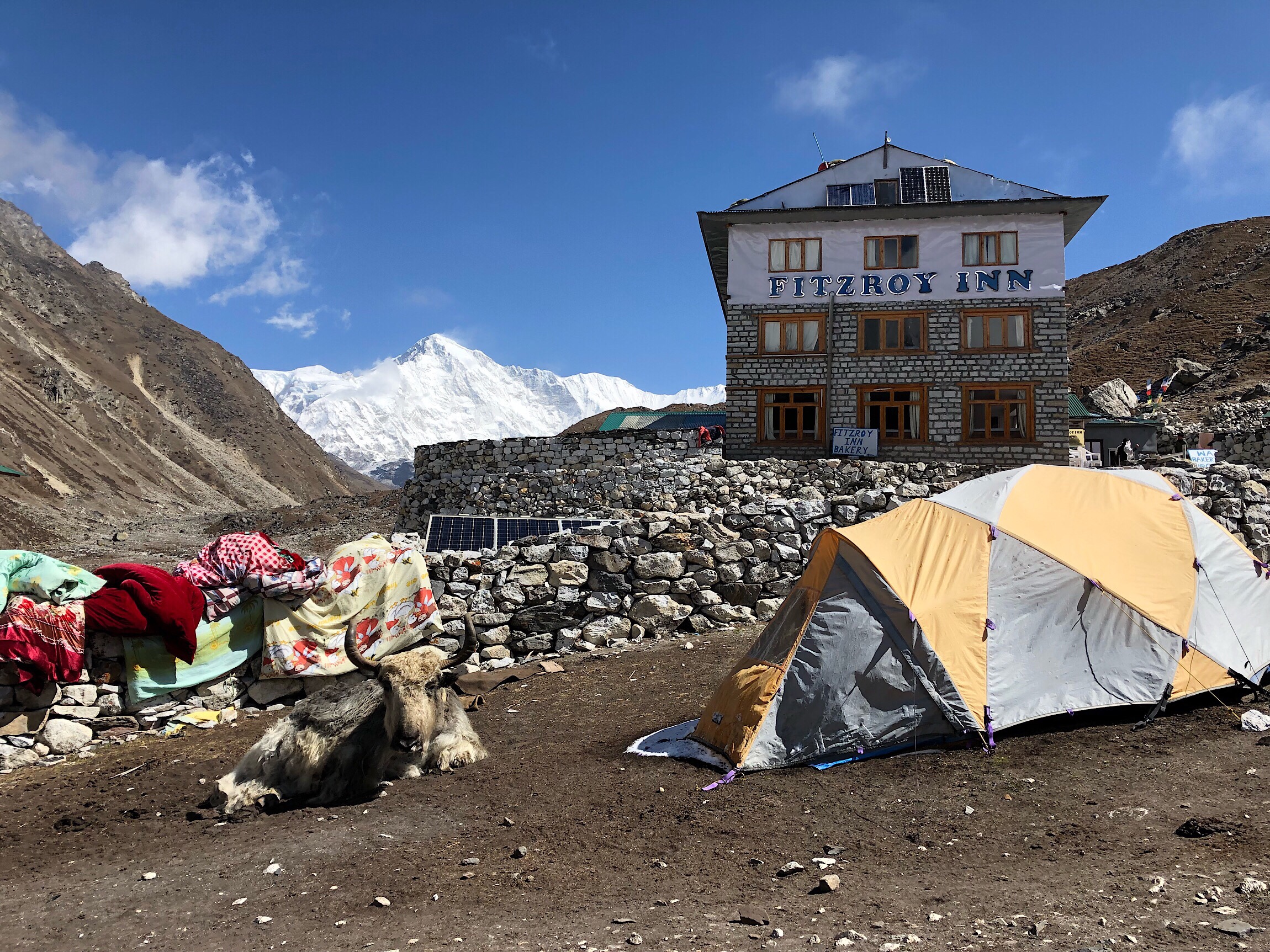 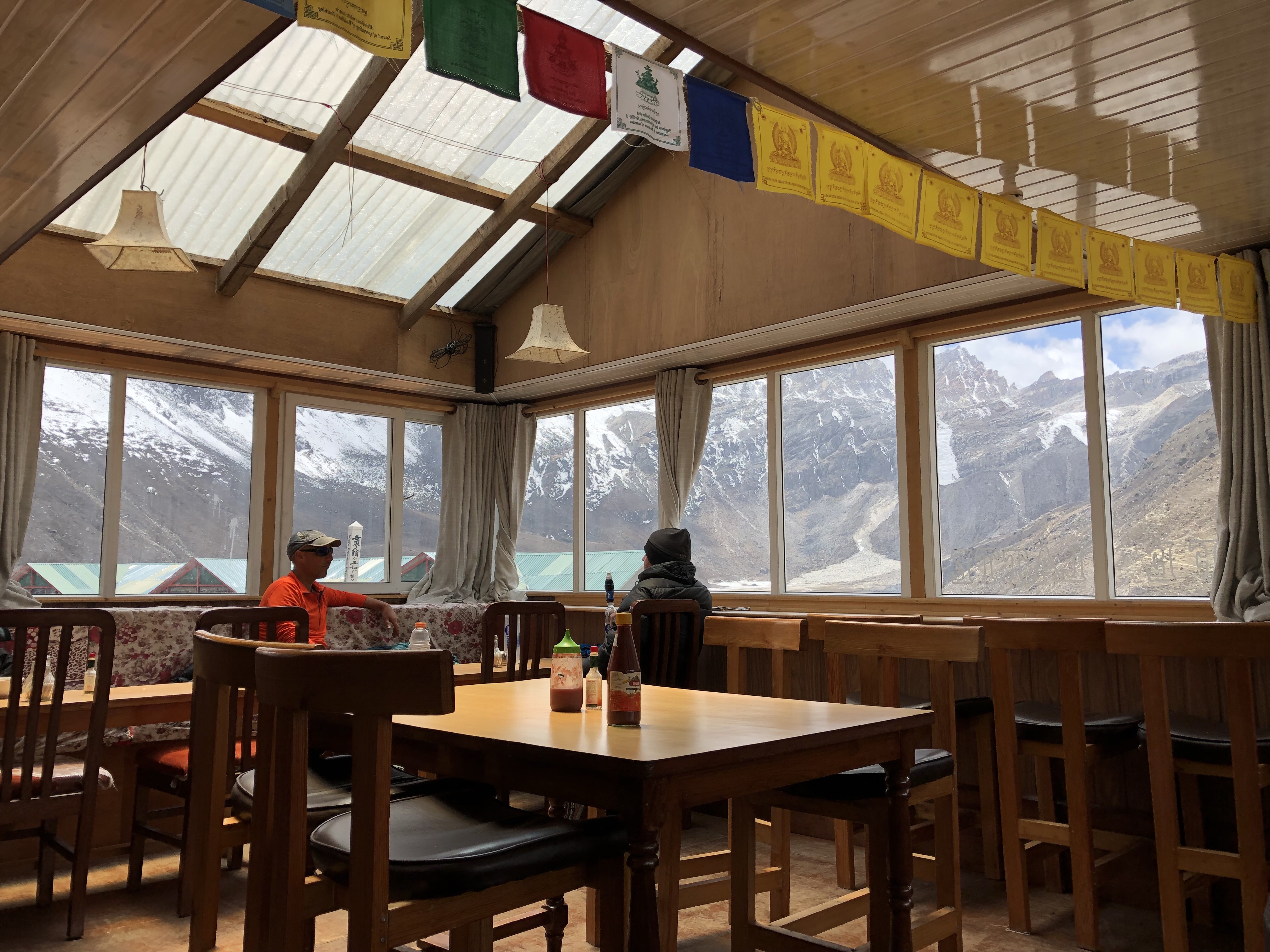 I spent a lot of the day in bed resting. Good timing for this day with the double whammy of high altitude and my period. I welcomed the rest! The guys also had some quality R&R. We had a final dinner as a trio and said farewell to Griggs who will get to sleep in some tomorrow before setting off. 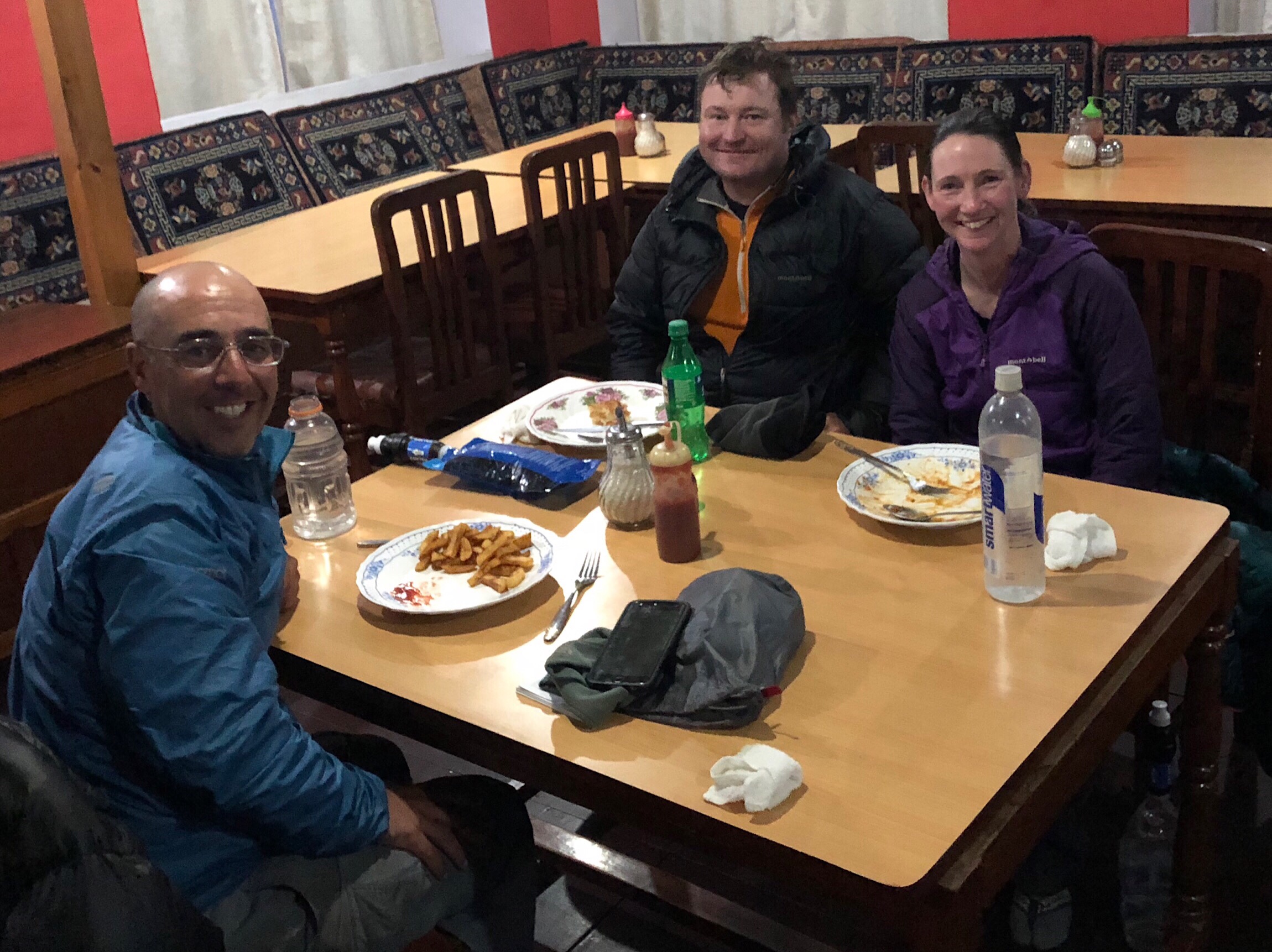 Tomorrow, Buck-30 and I will continue on up and over Renjo La Pass and into Thame to see if our arranged guides for Tashi Labsta really show. The last really stressful major hurdle of this trip! Buck-30 redid the math on our dates, and it will be quite the push with almost no buffer days. We just hope to get over Tashi Labsta without a delay, and then there are far fewer chances for delays the rest of the hike. Fingers crossed!