Day 3: Just Make It To Ghunsa

We are only on day three of this hike and it already feels like an odyssey. I guess it’s the combination of all the travel just to get here and then being sick where every minute feels like an eternity. I finally woke up feeling ok today! I ate a whole breakfast of eggs, jam, and chapati bread (like a pita bread). I packed up with my full pack weight, excited to hike without feeling miserable. Then, out of nowhere, after just a bit of hiking, the complete lethargy hit. The guys moved on ahead, and I just went into my own head focusing on slowly taking one step at a time. I felt like I was moving in slow motion, but knew I just had to keep a consistent pace and I’d eventually make it to our halfway point for lunch. 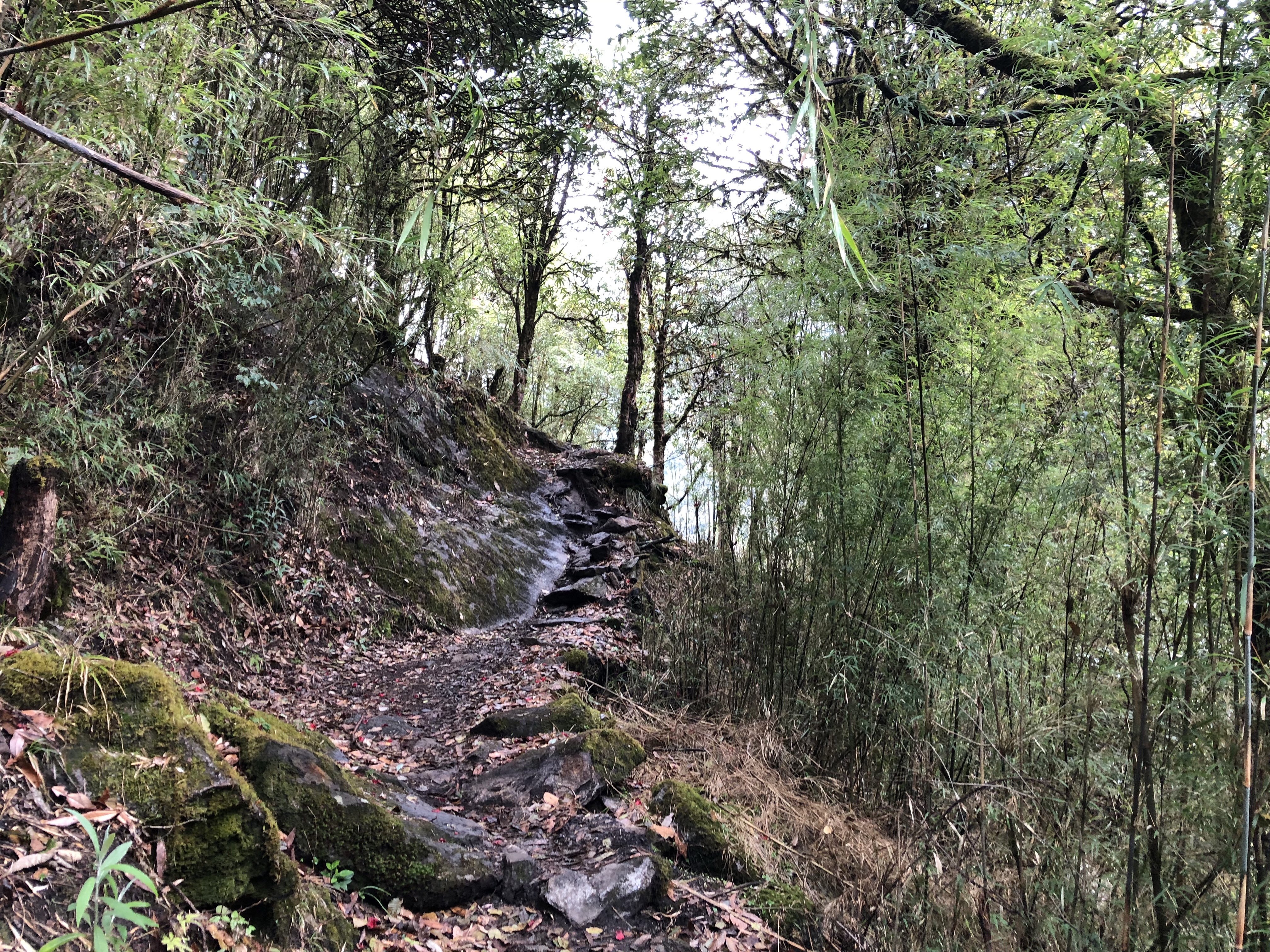 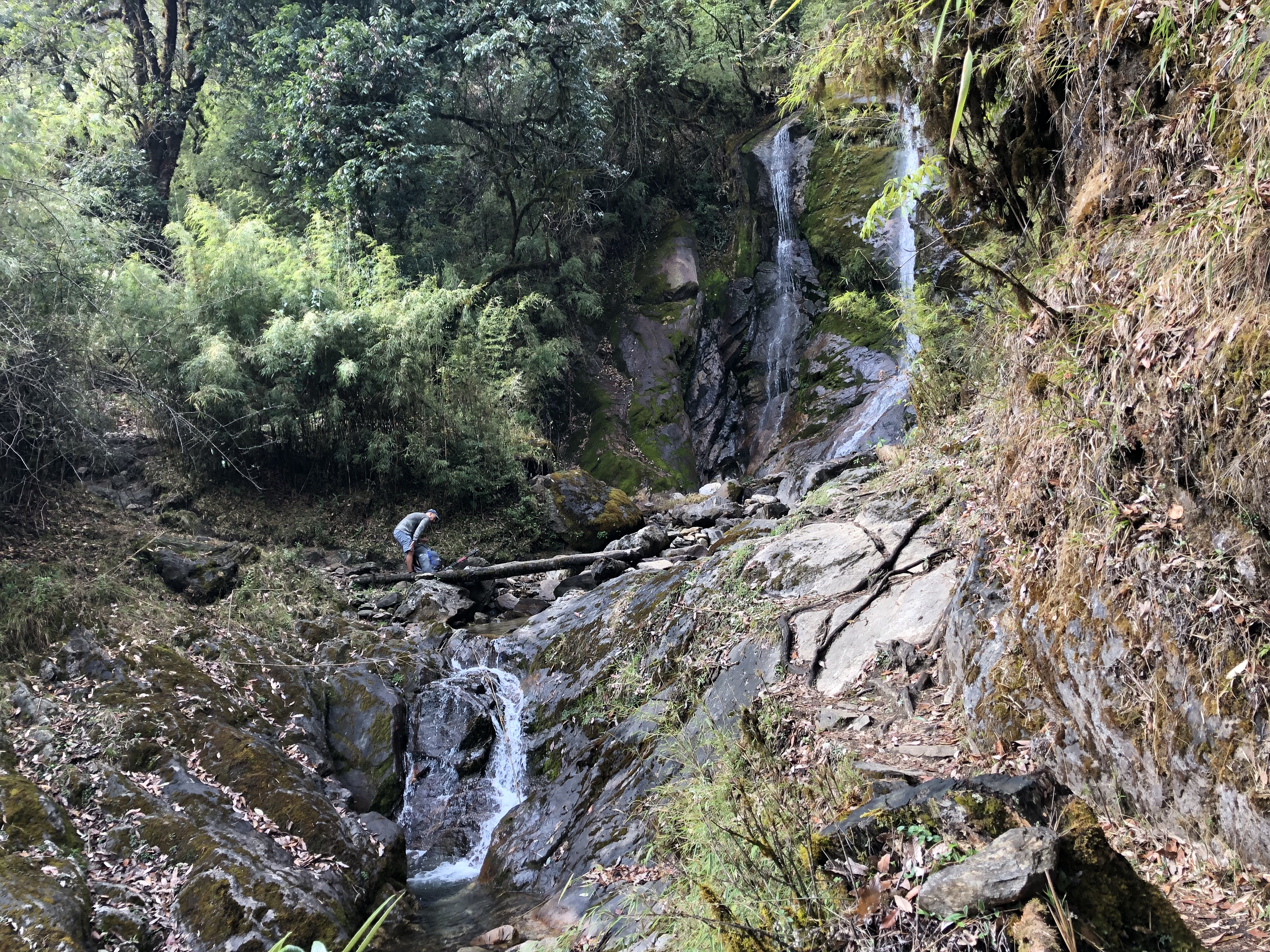 Buck-30 at a scenic break spot.

I put on my headphones, which I couldn’t even tolerate yesterday, and went into a whole other word. Kishor kindly, quietly, and patiently hiked behind me. Then he sat quietly with me when I got so woozy at times I needed to sit for a few minutes. I just wanted to keep my body moving, but couldn’t. He knew this was not normal for me, but it kills me that this is his first impression of me. It is so steep at times. 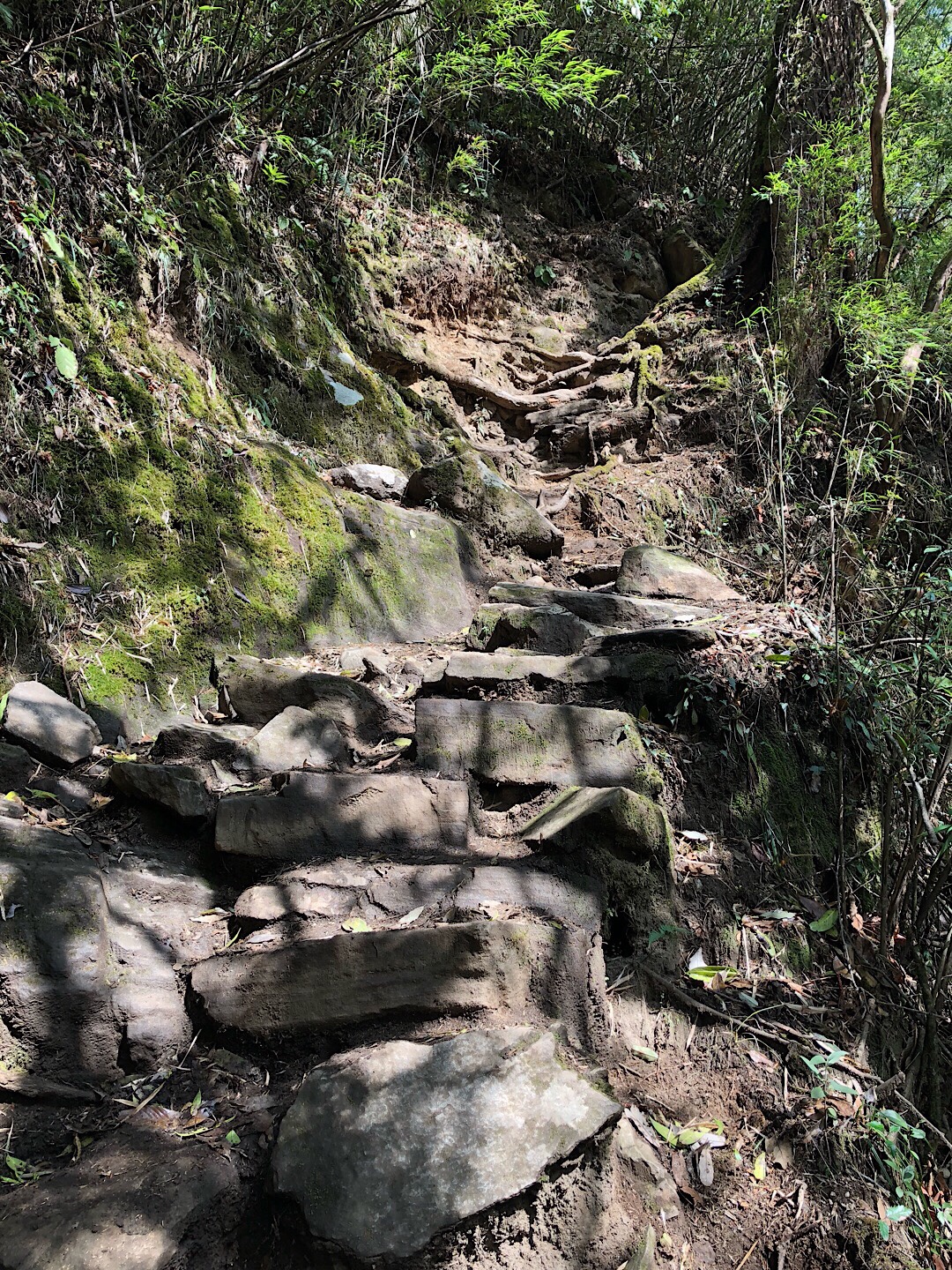 Well, I did hike normally the first day at least. So frustrating. Again, there was a lot of up and down along a river today; more forested today and slightly less steep. Again, I made it to lunch just out of gas and totally depleted. The guys were patiently lounging and enjoying the day. They had been there 30mins and 45mins ahead of me. My sickness at least isn’t changing our daily goals, we are just taking an hour or so more to do it. When will this ever end!? 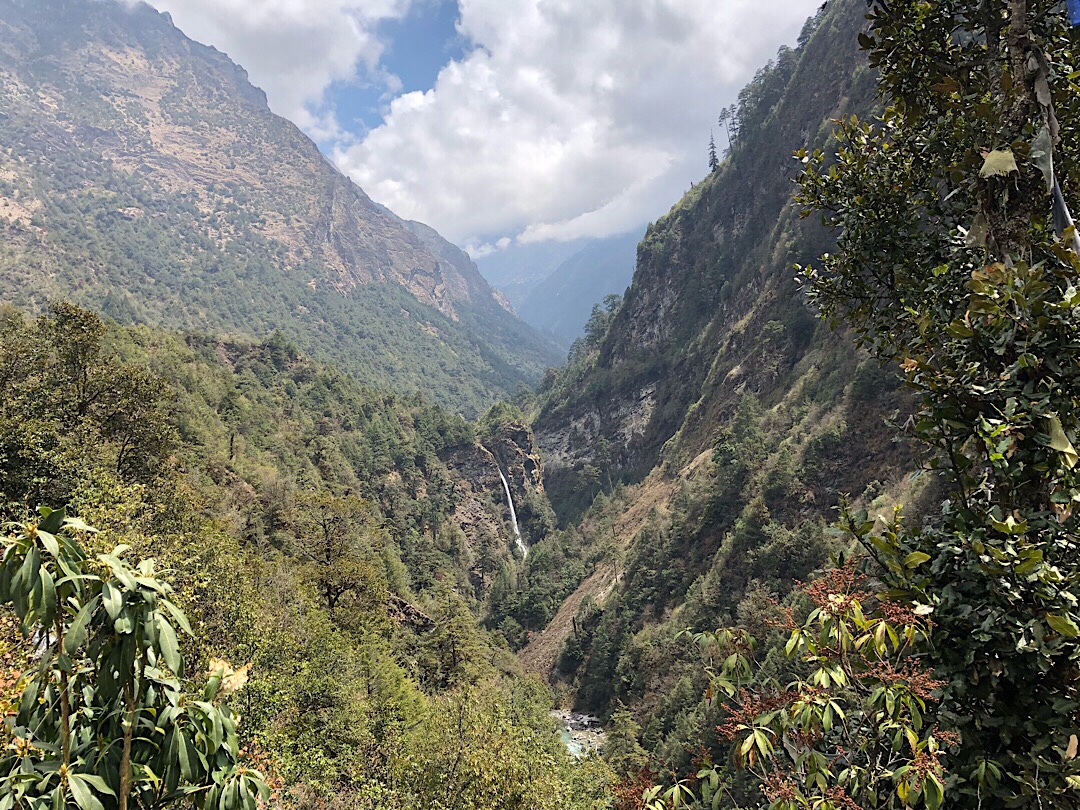 To put this in perspective though, we are still doing double the book days and about 20% faster than book time for these first three days. It’s been nice to double the book days because each section in the book ends at a teahouse, so we land at a teahouse for lunch and dinner everyday. Kishor loves dal bhat (rice, lentil soup, veggies), but we’ve learned it takes a long time to cook and not to order it for lunch at smaller teahouses. Today, at Gyabla, they promised dal bhat in 30mins. We joked with Kishor it better not take forever…yep, over an hour. 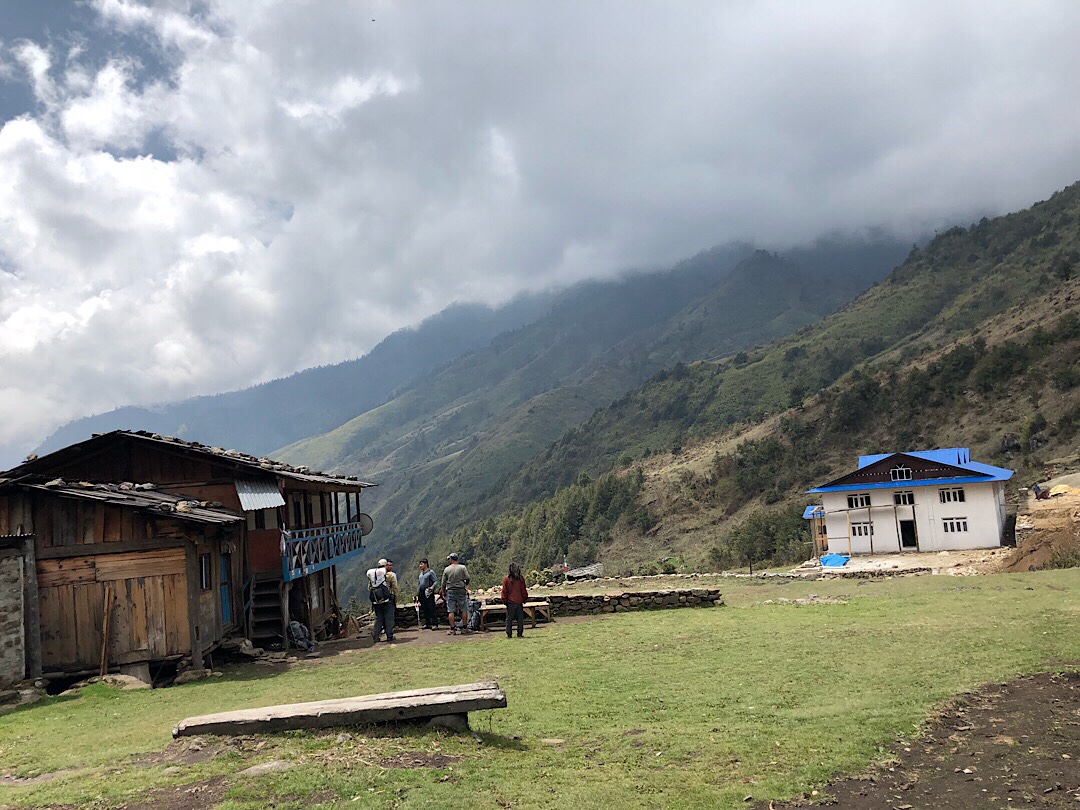 Someday, we’ll learn, but I ate half of it! Then randomly, I was back to almost my normal self again the whole afternoon hiking. There are t-shirts in Kathmandu that say, “Dal bhat power, 24hr!” Maybe it’s true! I was able to just barely keep pace with Buck-30 and we kept Griggs in sight as we wove up to Ghunsa at 11,218ft/3419m. Whatever it is, I hope it’s here to stay! 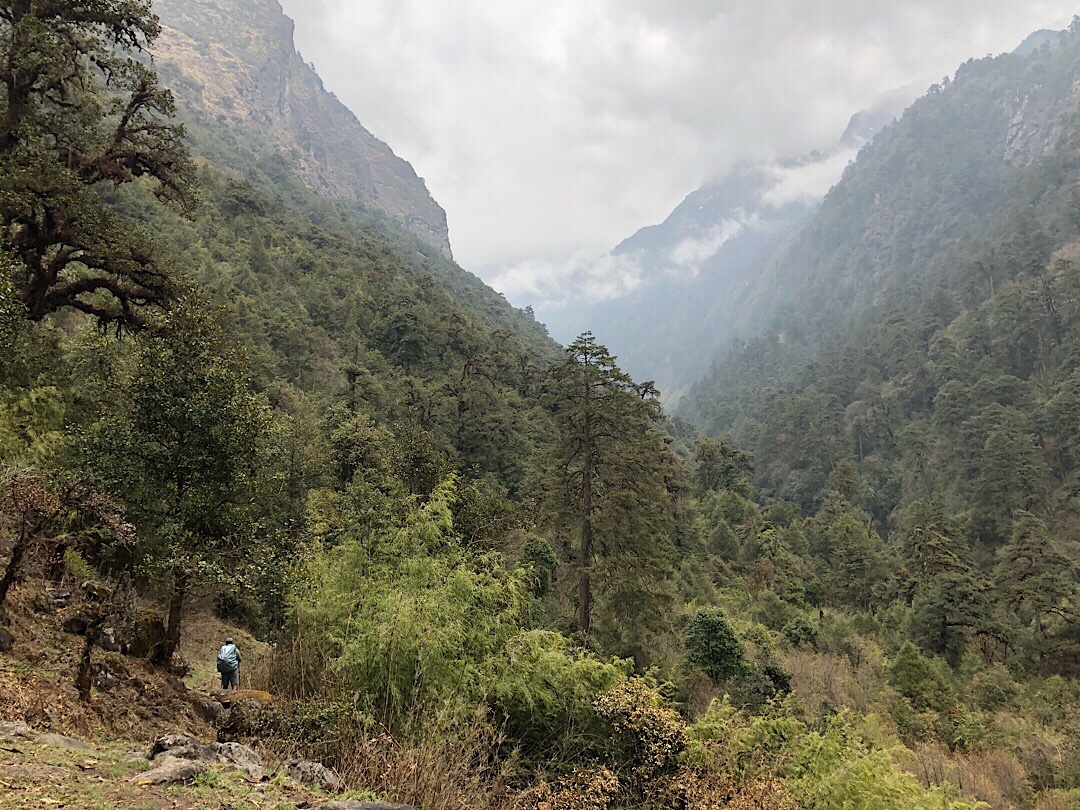 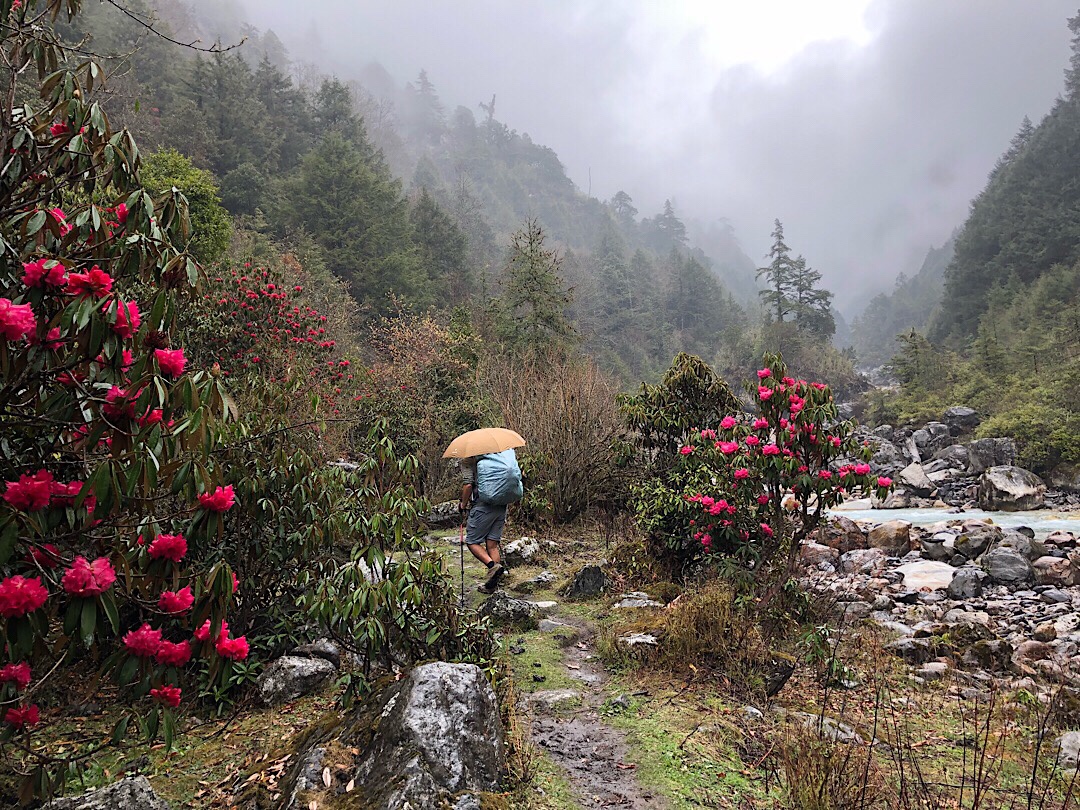 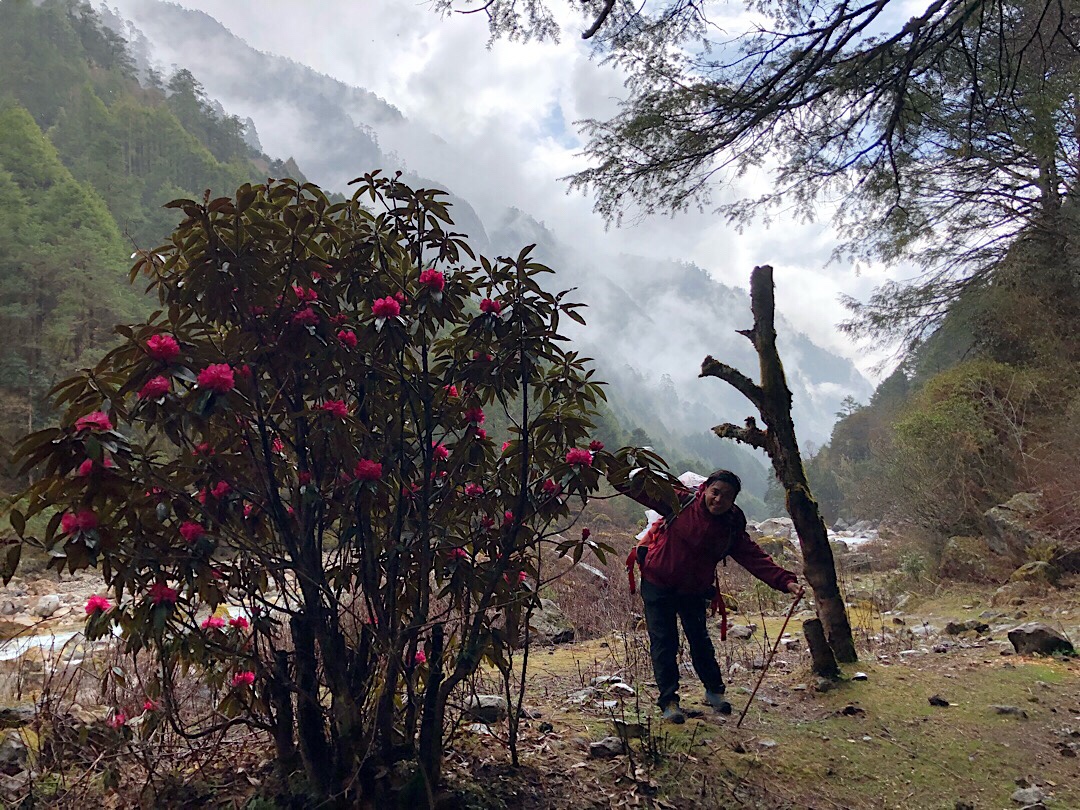 The first two hours after lunch, it rained, but it was light enough to not need our rain jackets and use our hands free umbrellas. I was actually having fun pushing up the winding terrain. Good to get a taste of this to remind myself I really do enjoy hiking and that this is hopefully not a permanent lethargy. 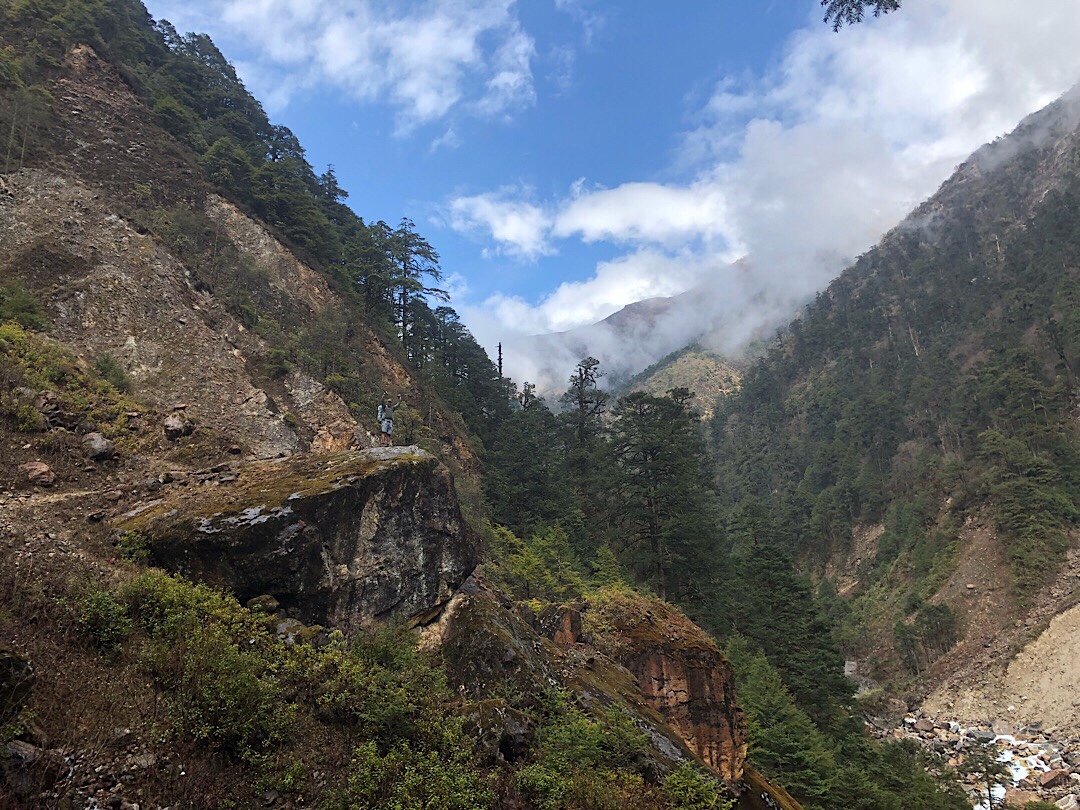 Notice Buck-30 on the rock outcropping. 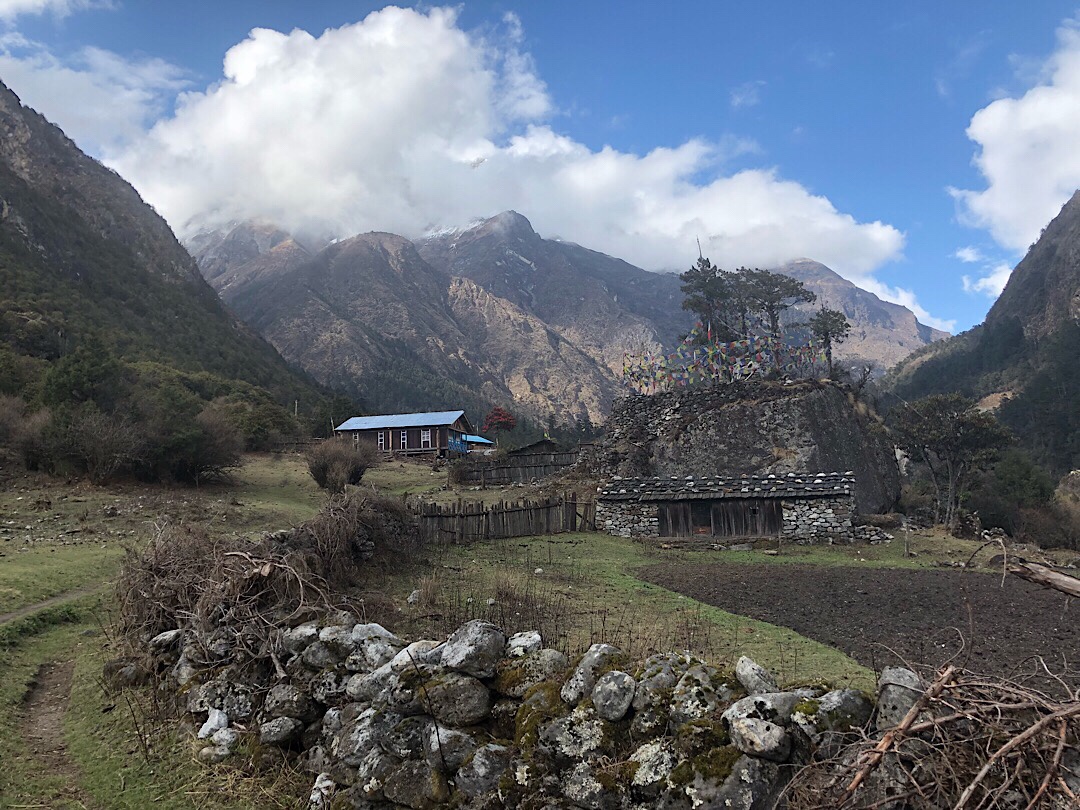 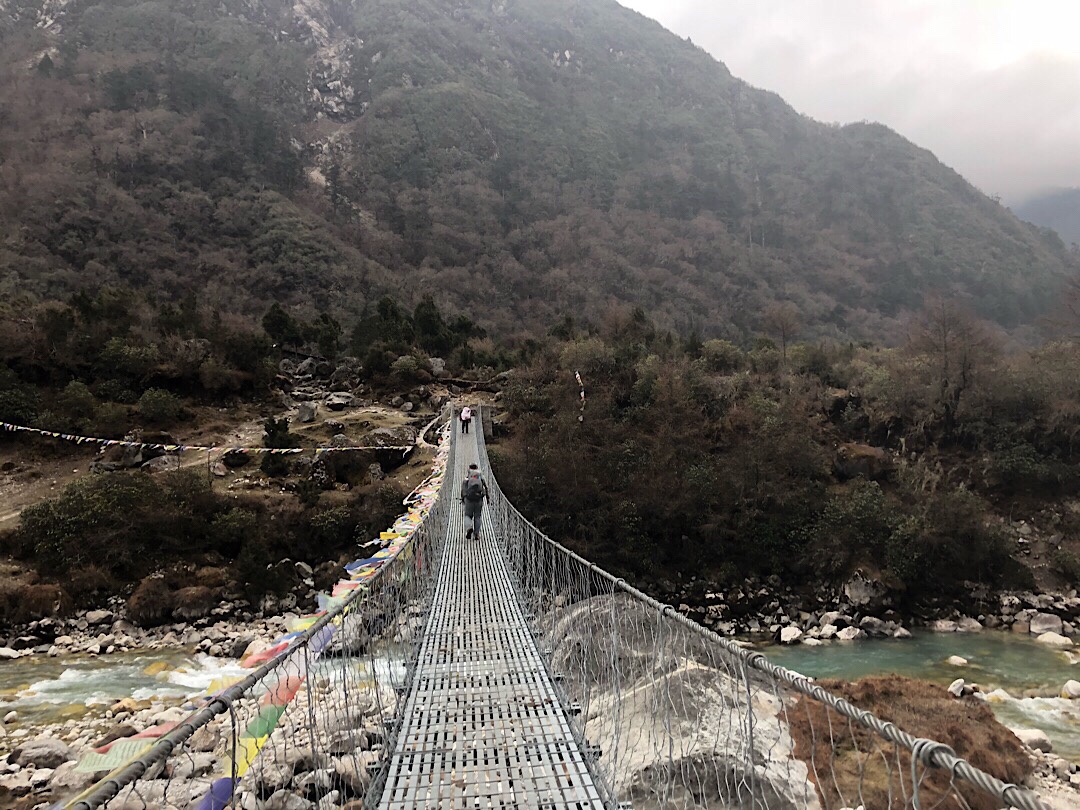 Bridge with prayer flags over to Ghunsa.

By the time we got to Ghunsa, Griggs had done a lap of the village and scouted the best options for our zero tomorrow. We will take a planned day to rest and acclimate before pushing up over three days to Kanchenjunga Base Camp at 16,873ft/5,143m. We thought about our rest day at the next camp up another 2,000ft/610m, but it would certainly not have the accommodations they do in Ghunsa, I need a rest day (so do the guys), and we don’t want to push too high too early. Even though it’s only been three days, we all are greatly welcoming a zero. It’s different from any other thru-hike for sure. Buck-30 said, “I never imagined I could be this excited to get to a zero day just three days into a hike!” We chose the Selele Guest House. They have a nice building that seems insulated, 24hr electricity, a hot shower option, and we could each get our own room. 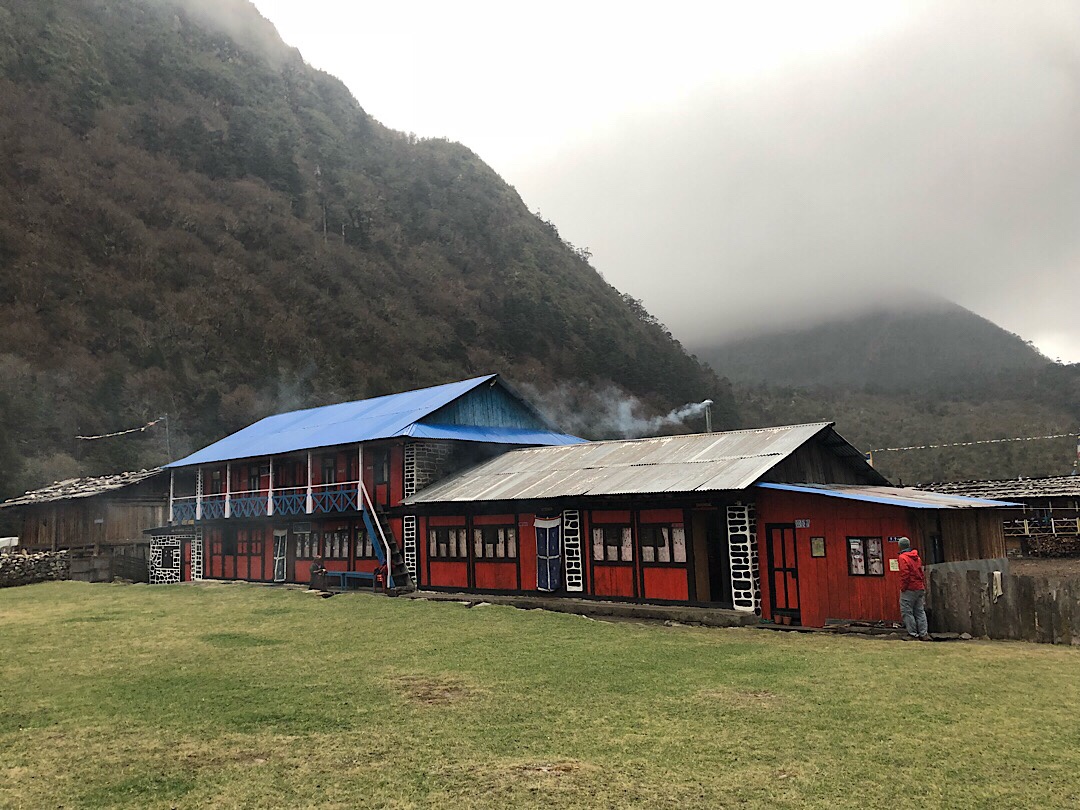 Griggs had been a bit off his game today. Usually, we can’t have him in our sights hiking, so we knew something wasn’t right. Buck-30 and I joke we will battle all trip to not be the anchor in this trio, because Griggs is such a machine. Buck-30 is relieved it was me that got to be the anchor first. Well, tonight Griggs became the next victim of stomach issues. He said he hadn’t been feeling well all day and was nauseous. He went straight to bed without dinner. Nothing has happened, but he’s feeling on the verge of getting sick. Nooo! We heard this would happen, and that we’d all be taking turns being sick all trip. We just hoped it wouldn’t happen so fast.

Buck-30 and I had the best dinner yet! They had a whole menu to choose from. We ordered veggie mo mos (dumplings) and potatoes with butter. It’s was so satisfying! It had to be the happiest I’ve been since arriving. I can eat! I better enjoy it while I can. I have a day and a half of the cipro antibiotics left to take to complete the dosage, and I may just get sick all over again. The hope is that whatever Griggs has will pass overnight, but he looked miserable. At least we zero tomorrow. 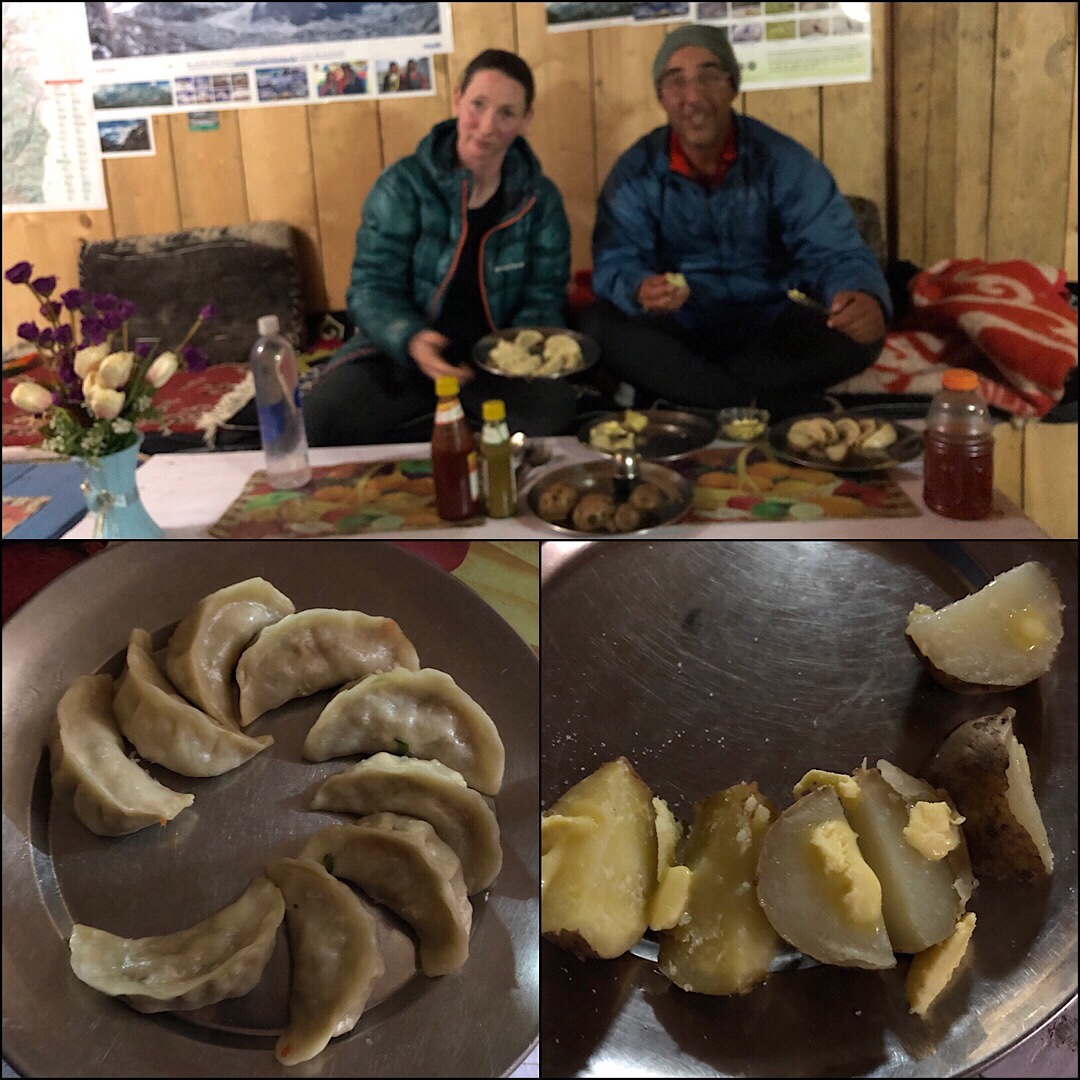 A momo and potato dinner photo from Kishor.