Day 5: Don’t Snow On Me And Tell Me It’s Normal

Since today was just a half day of hiking, we had breakfast an hour later and got going at 8:20am. The next few days are short days because we can only safely do a certain amount of elevation gain to acclimatize. Today was 2,000ft/610m up over 6mi/10km. It was wonderfully gradual and the best day so far. 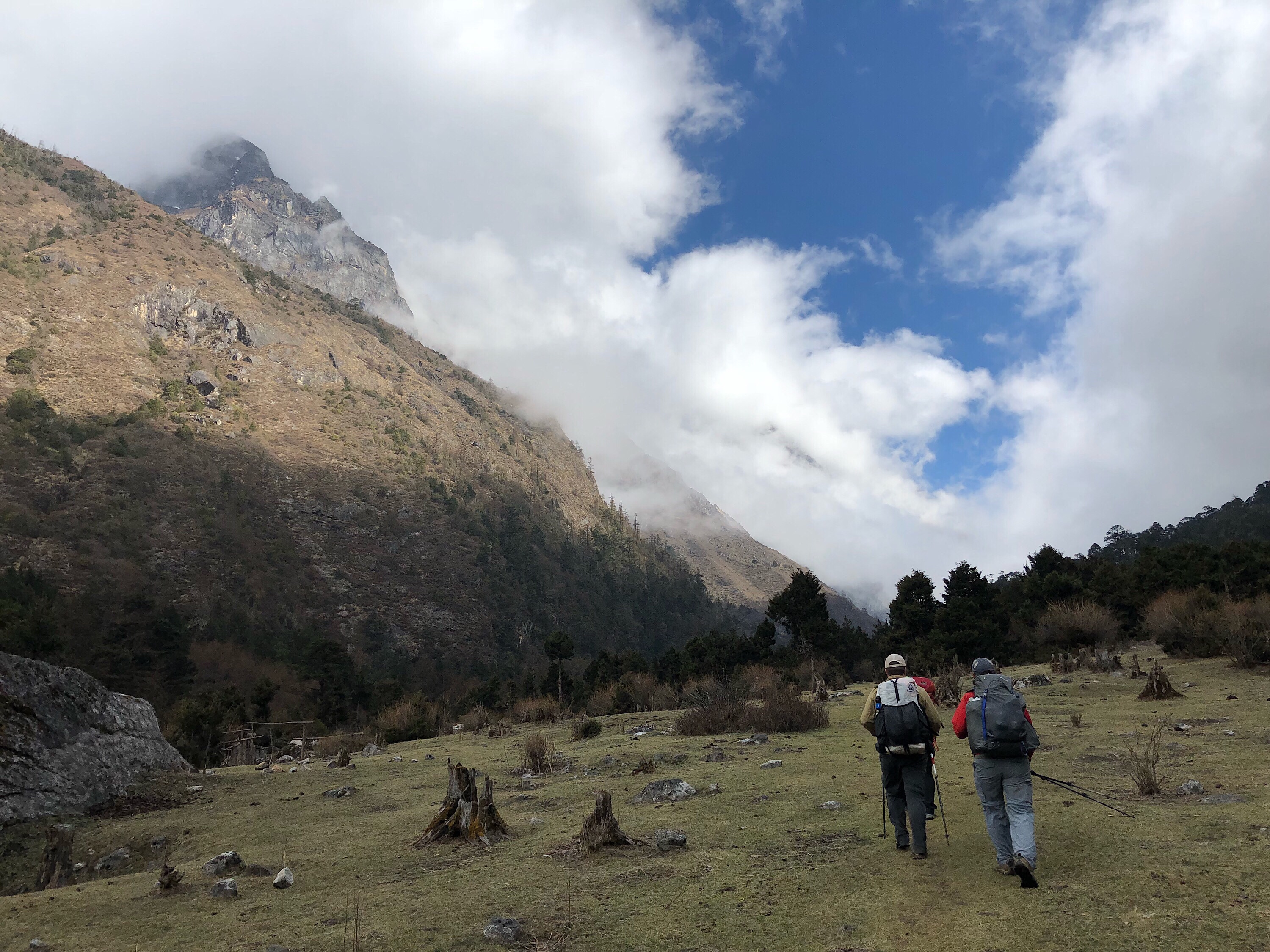 All of us are on the mend finally! Today, Griggs got to be the anchor. Let’s mark this day, because it may never happen again in the history of hiking. Buck-30 and I were completely fine with a relaxed pace, so we all stuck together. We walked up the river valley for the day and took two nice breaks to just relax and drink plenty of water. 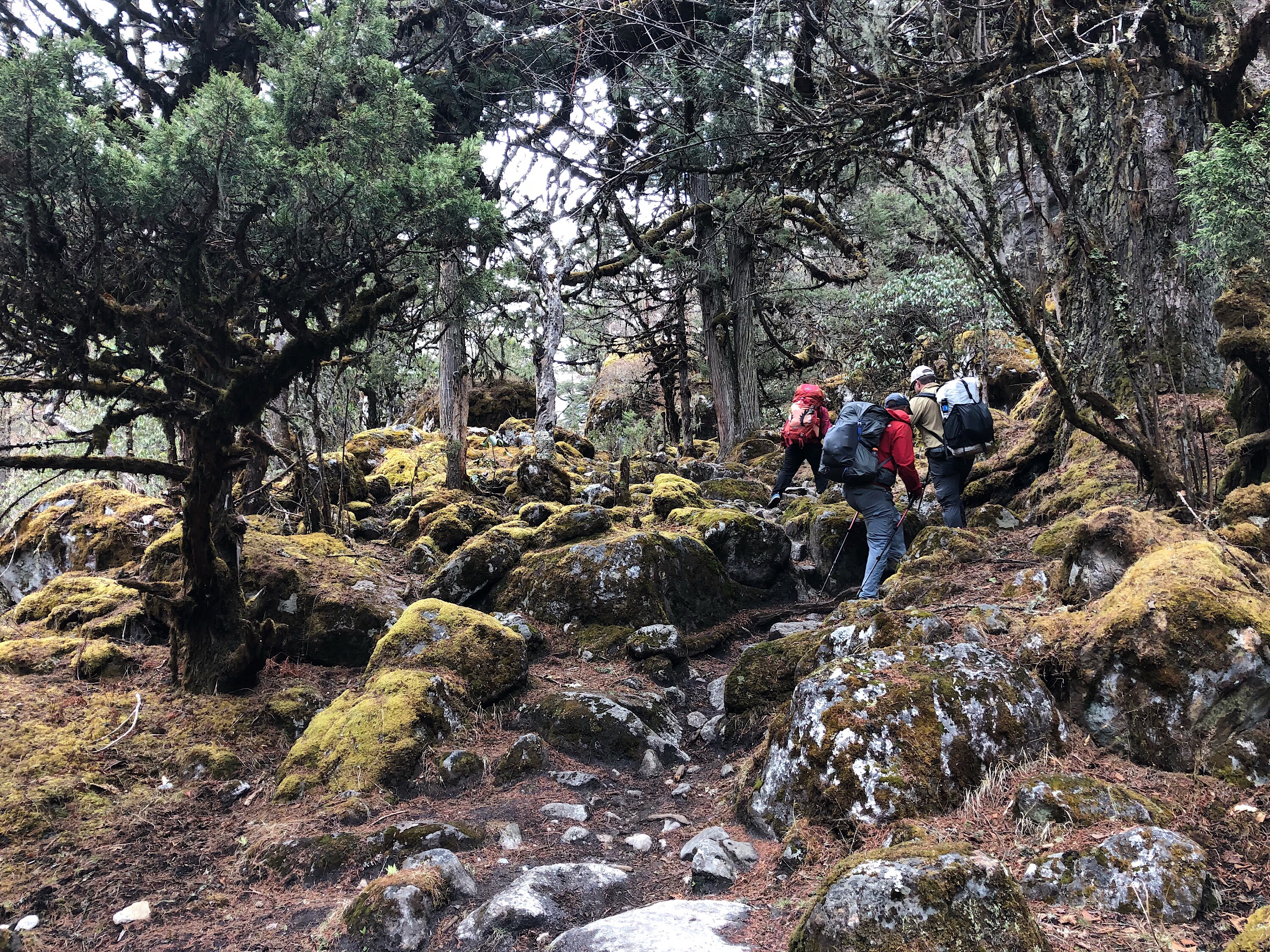 Buck-30 and I have decided to go with Diamox to help with acclimatizing. I’ve never done stellar with high elevation, and tend to adjust, but it just takes me a bit. It seems to be working so far, but my body is so flipped around, it doesn’t know what’s normal. I started my period this morning, which tends to knock me down a notch, so we get to add that to all this fun. So far, it hasn’t been bad thankfully. 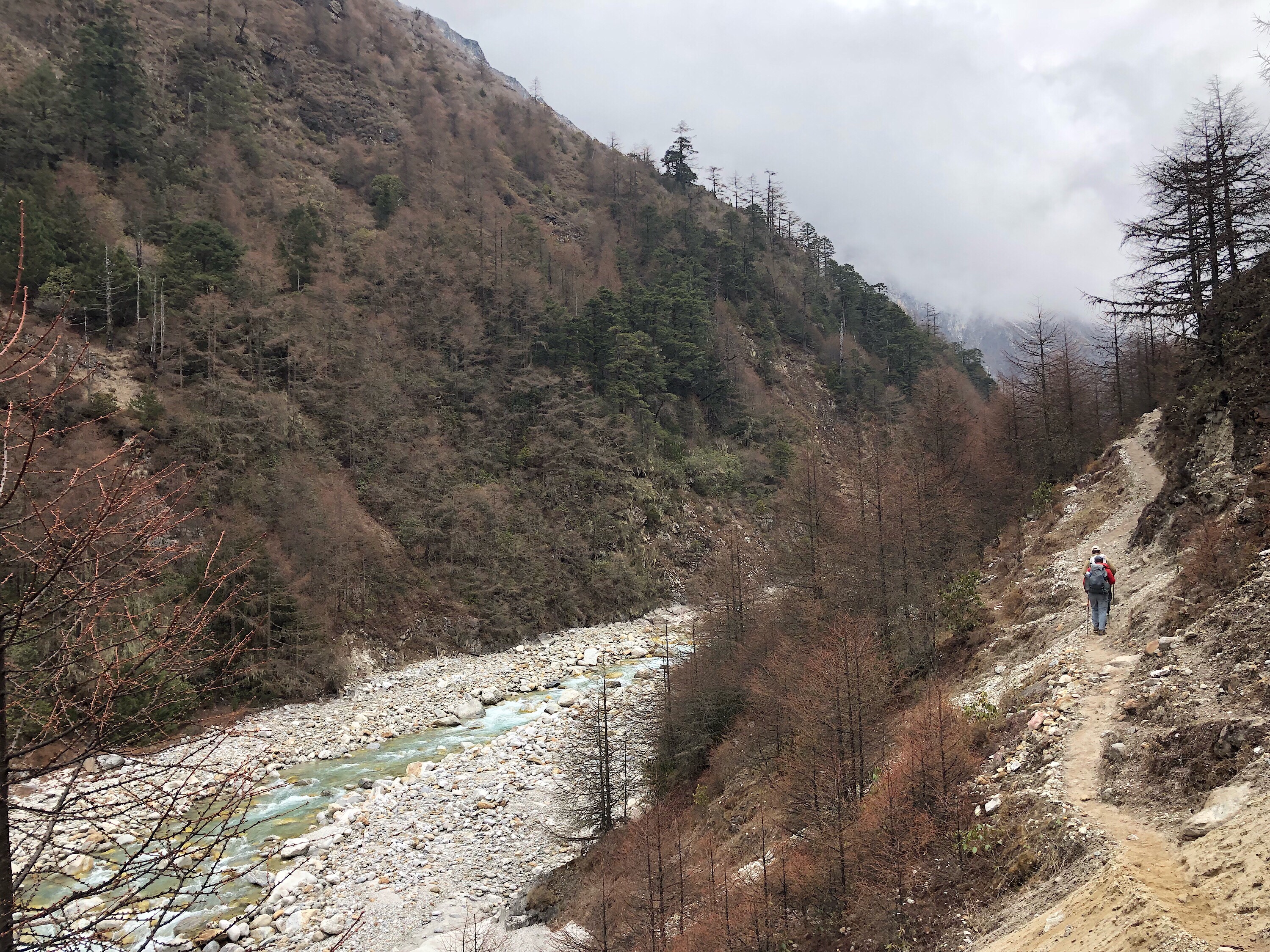 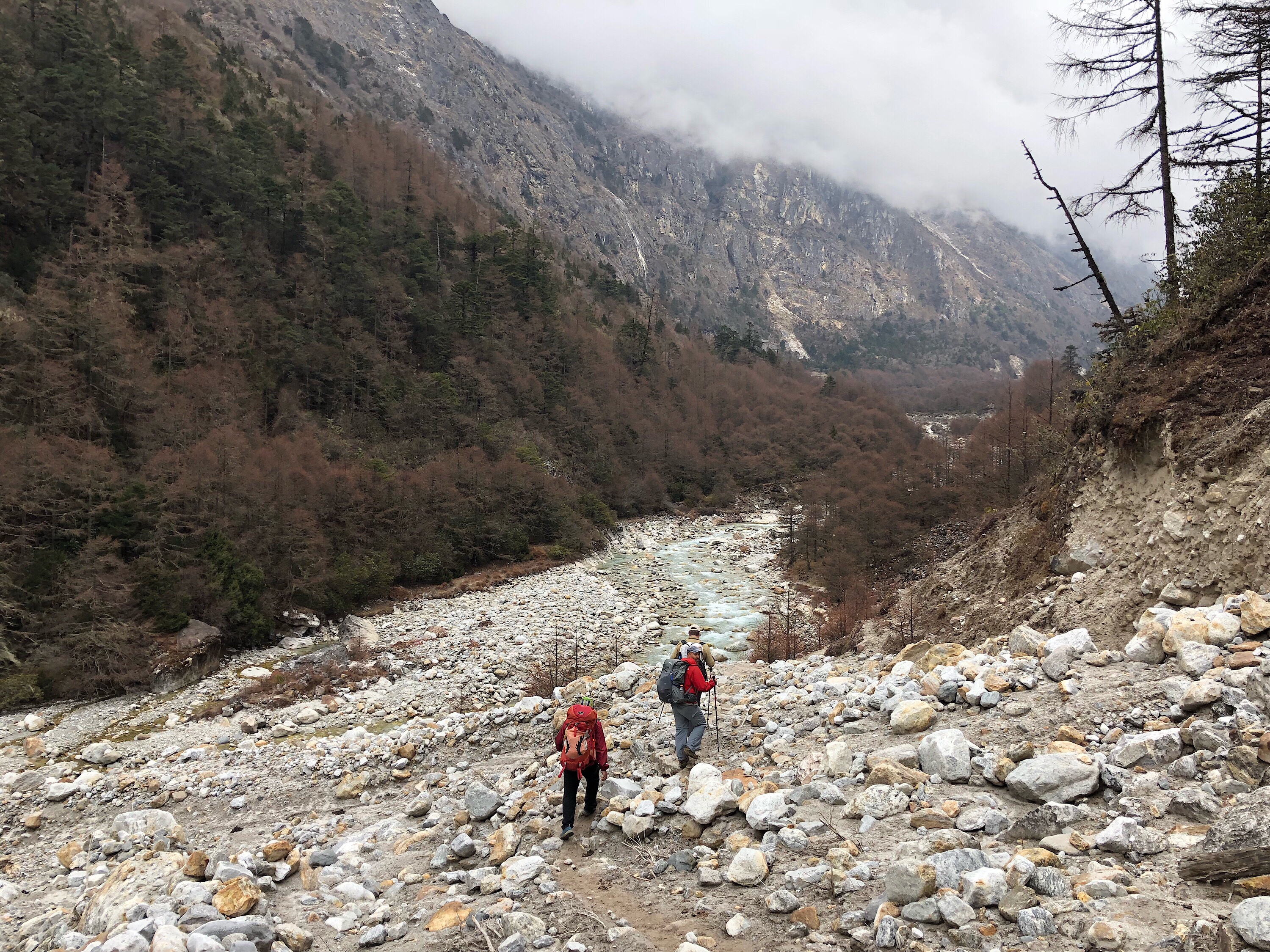 It really was a fun relaxed time hiking up. We leapfrogged with a Nepalese man and woman heading up to Khambachen as well. The man was delivering supplies and rice. 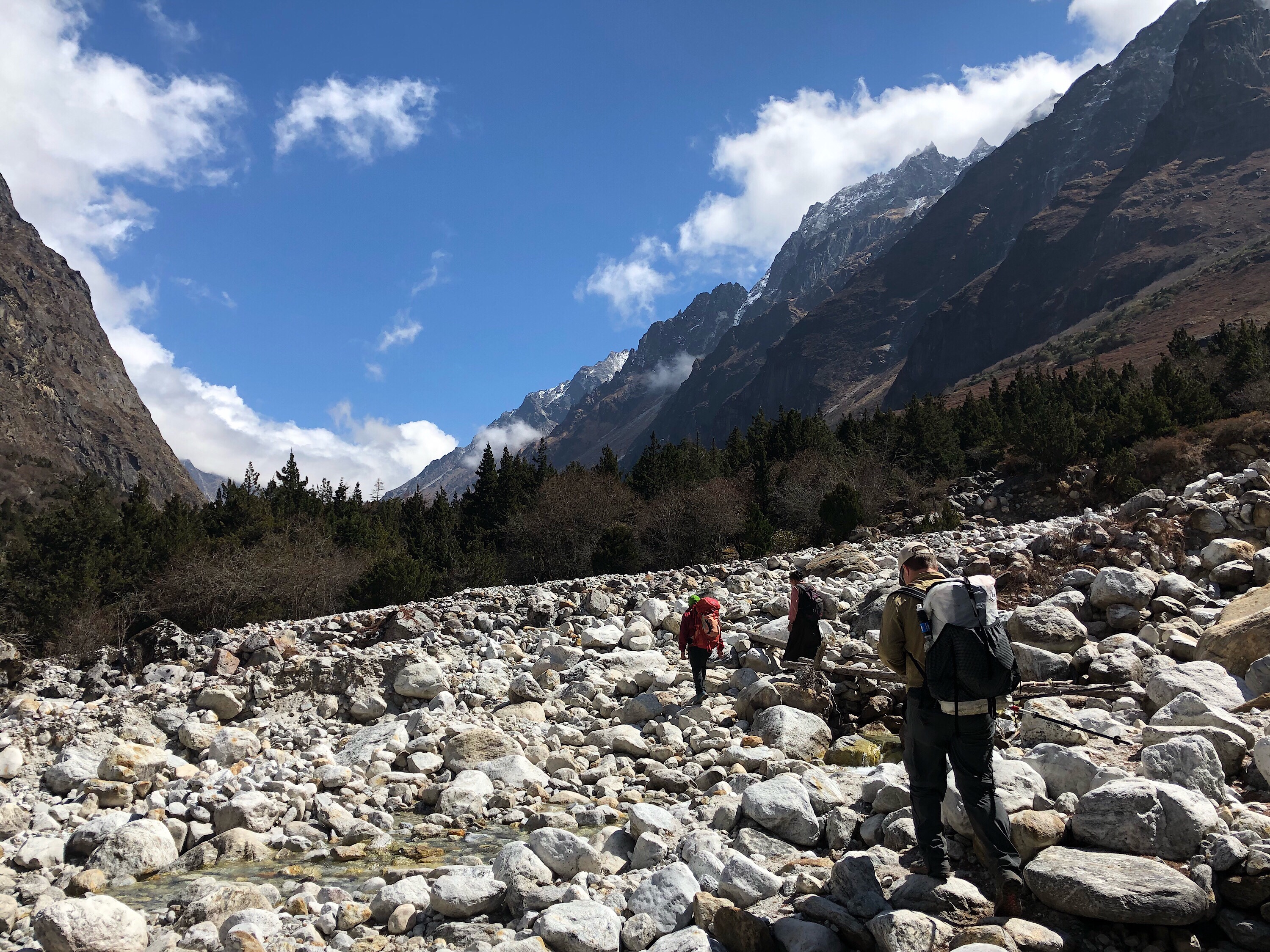 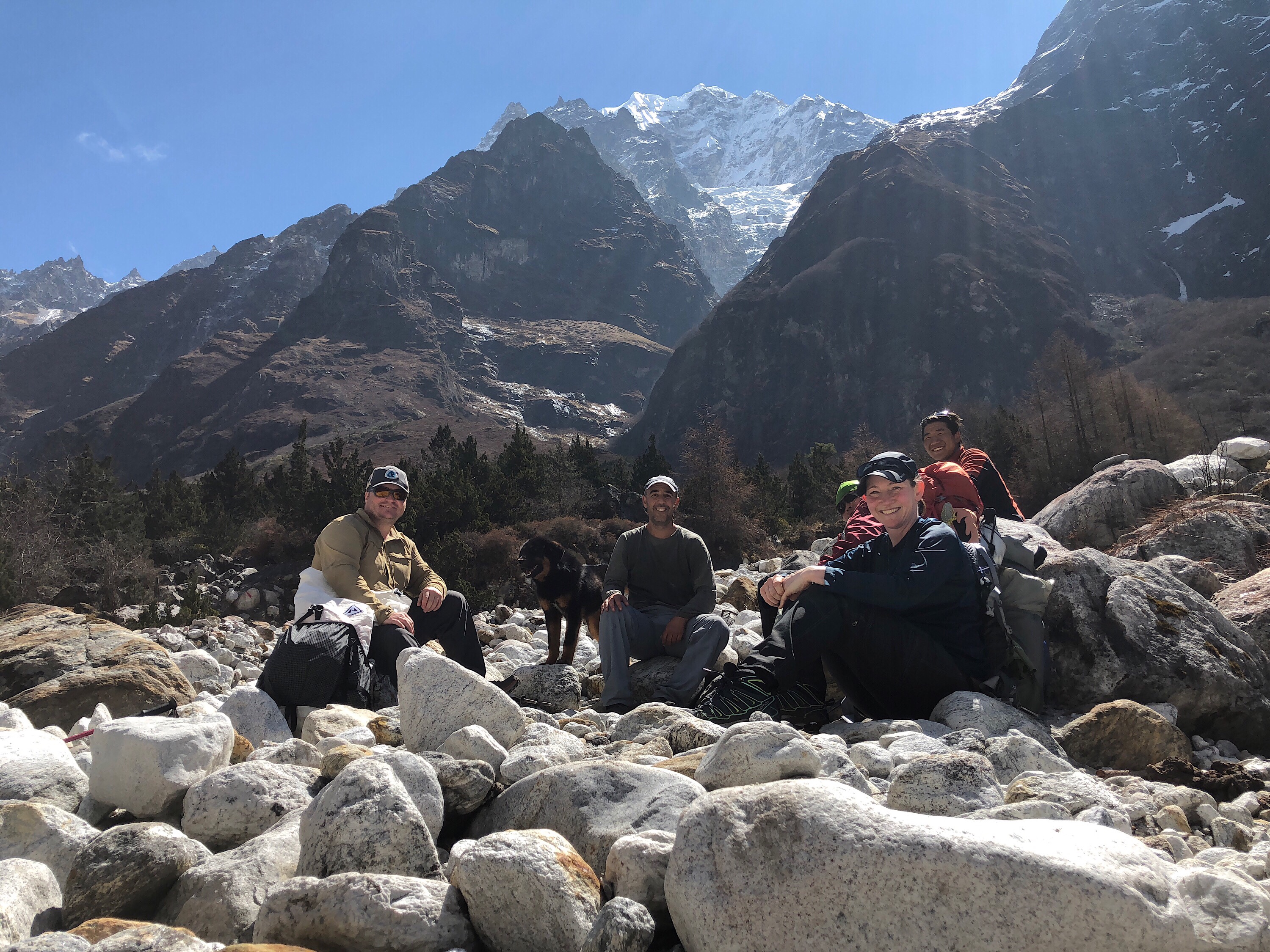 The woman didn’t speak English, but Kishor told us she owned a teahouse there. As we got close to Khambachen, Kishor kept saying we could stay at the woman’s teahouse and to follow her. He knows we like to look at all the options and told him we will see, but weren’t promising. 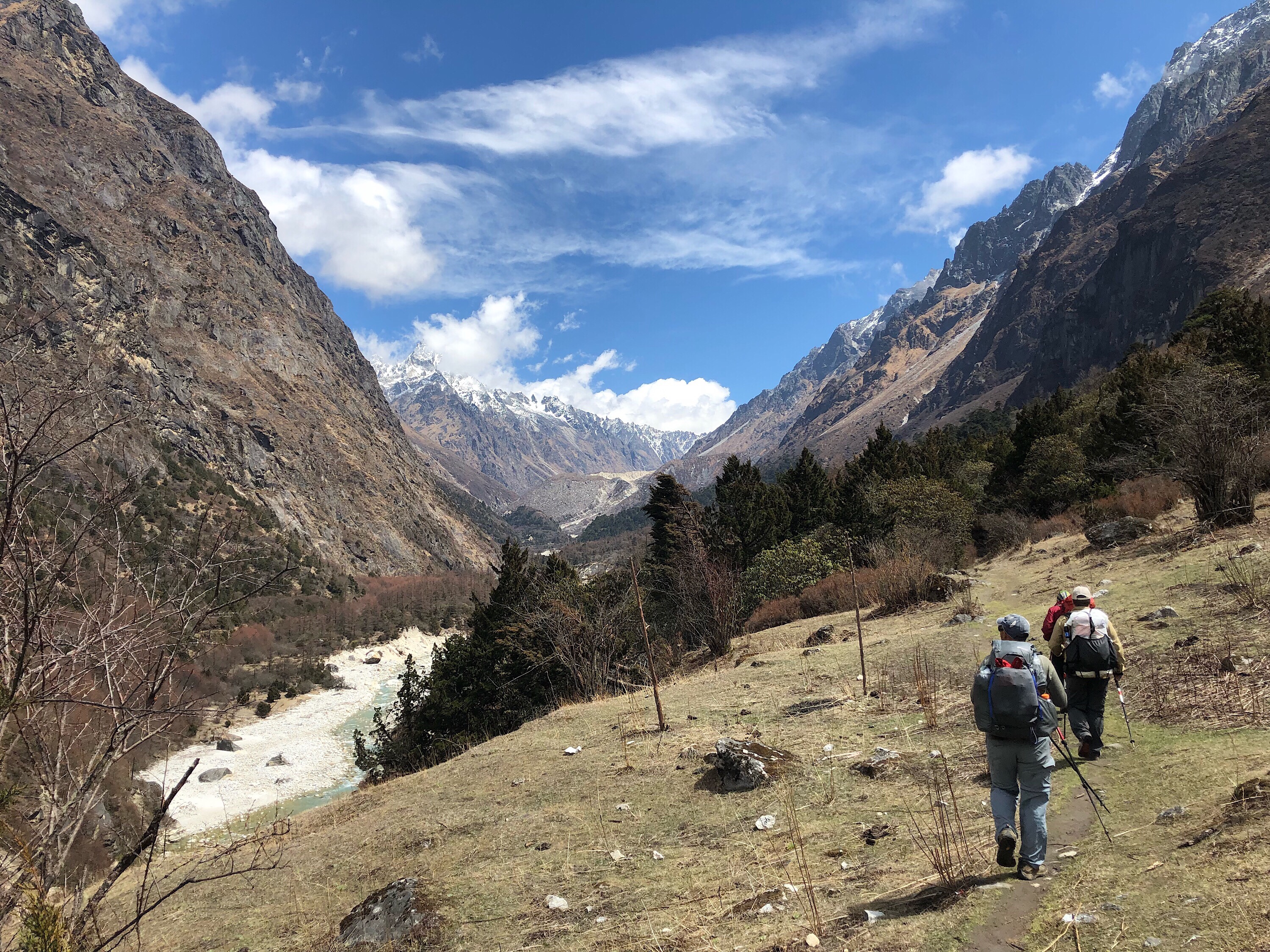 In the final 30mins, Buck-30 and I took the lead. Kishor kept yelling ahead to make sure we would follow the woman and get lunch ordered. It was starting to feel pushed. We followed the woman, and she wove us the back way through the small village a strange way (later we realized why). 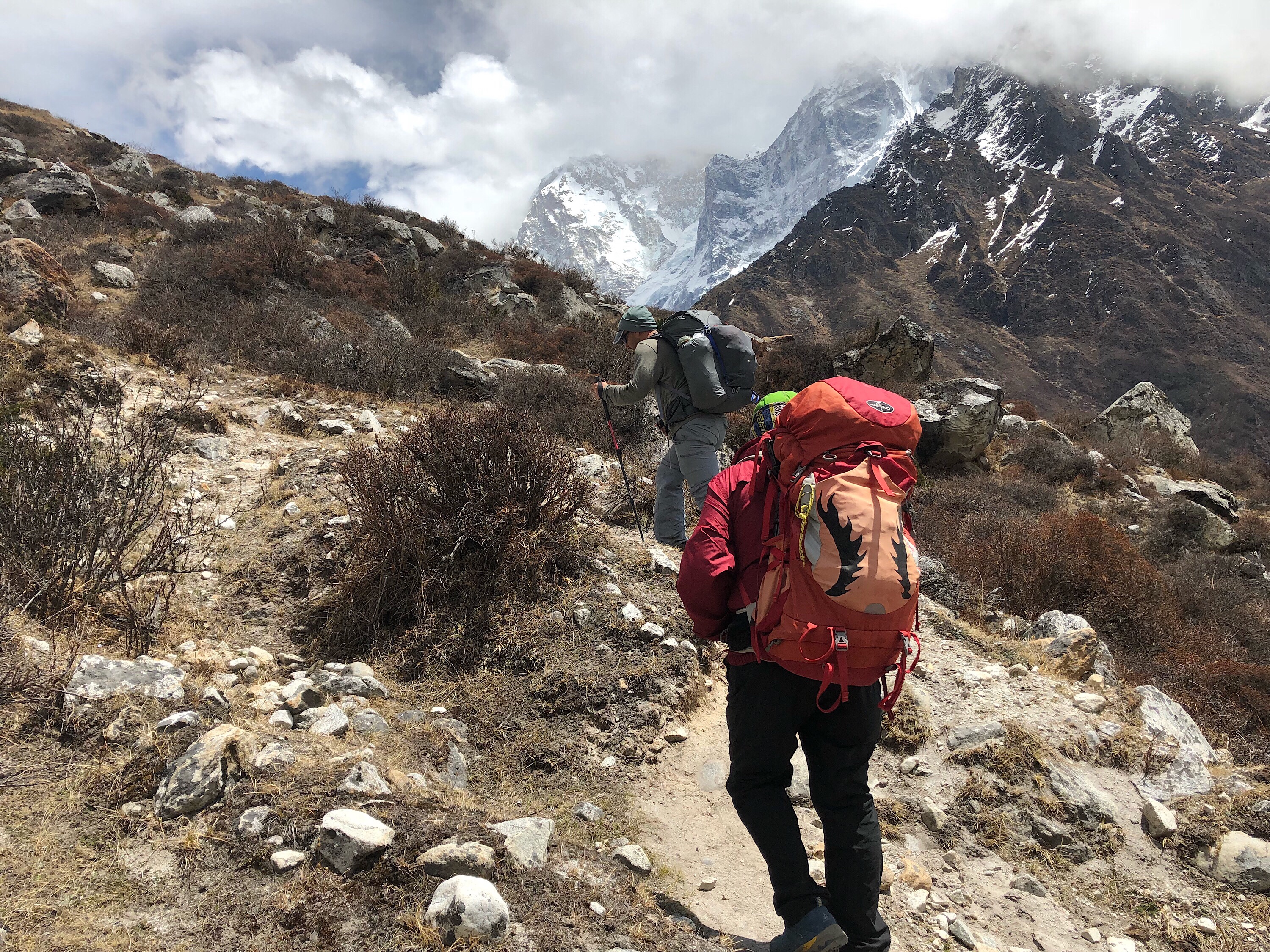 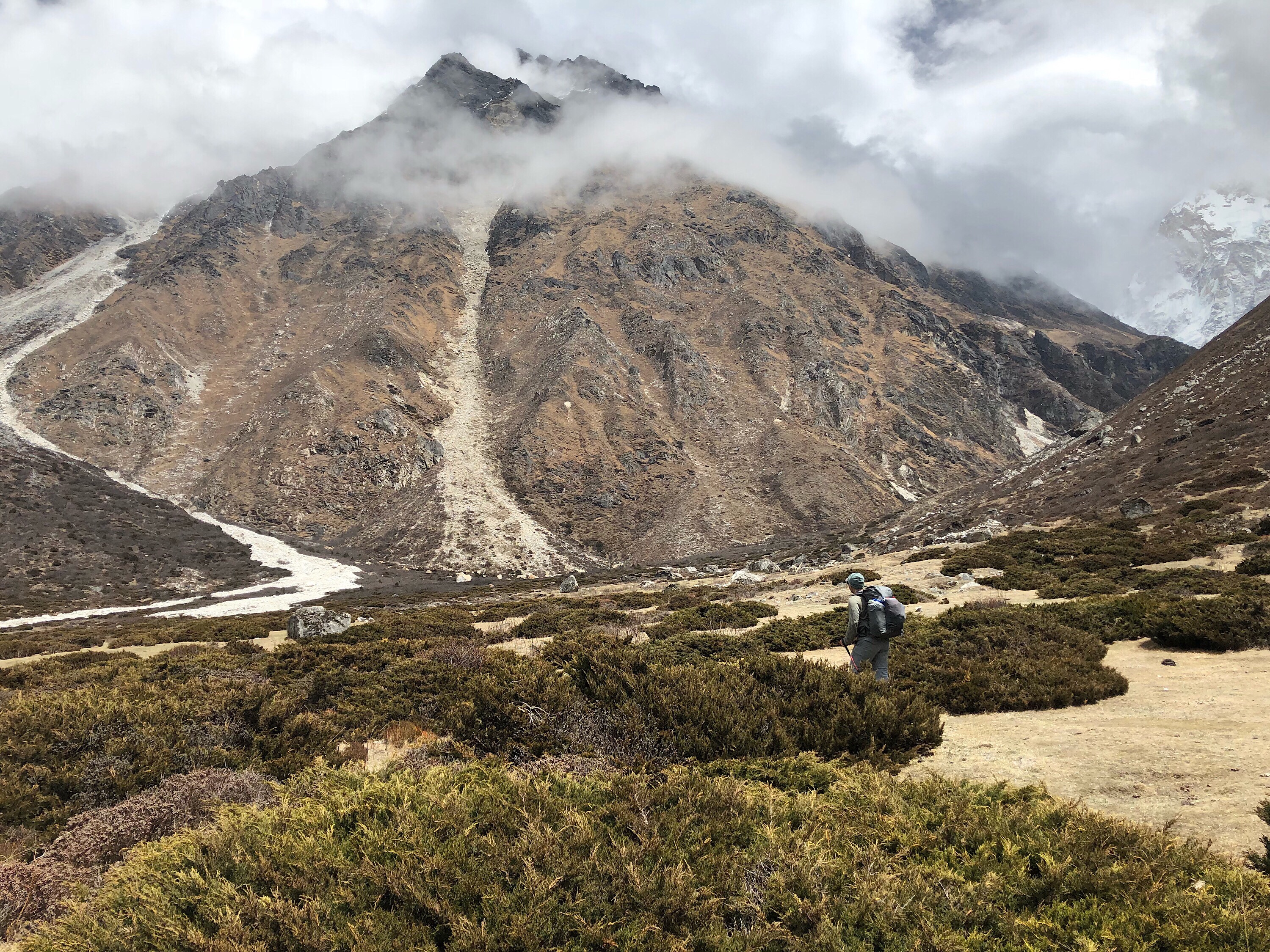 Griggs and Kishor were just behind us. Kishor translated as the woman showed us the rooms. It seemed sufficient enough, and then we asked for the price. It was $5/room. More than double what we’ve been paying. He translated that all were the same price and that there was a committee that required it. We felt that we were being swindled and hesitated. Then, magically, we were being offered $4/room. I turned to explore the neighboring buildings and ask their price and Kishor stopped me and said she would do $3/room but we couldn’t tell anyone. We still felt something was fishy and didn’t like the feeling that our own guide was scamming us.

We went into the rooms to unpack as the woman started to make us all dal baht. Then it started snowing pretty solid pellets. The pellets came right through the walls and the ceiling into our rooms! It was snowing in our rooms immediately. We got Kishor and showed him and told him we couldn’t stay there. We noticed the beds even seemed damp. He told us it wasn’t snowing in the rooms as we stood there with it landing on us. Kishor said all the places were the same. We packed up and Griggs and I checked next door at a place called The White House. It was awesome there! Rooms were insulated, and it was the best beds we’ve seen so far. It was even featured in the Lonely Planet. The same thing happened with negotiating the price, and we got him down to the $3/room, but we still wanted to return to Kishor and the woman for lunch.

When we told Kishor we were moving next door, the woman desperately offered $2/room. We told Kishor to tell her it wasn’t the price, it was just that it wasn’t protected enough. It was very awkward and uncomfortable. The woman was very upset and dejected. We told them we would be back to eat after we got settled next door. Kishor was very demanding, got stern with me, and said that we needed to stay and eat first, but our meal was still at least 30mins away. It was all very frustrating to feel like our guide didn’t have our best interest at heart and that we were being swindled. It was a very uncomfortable and quiet lunch without the usual joking from Kishor as the woman sadly prepared our meal. 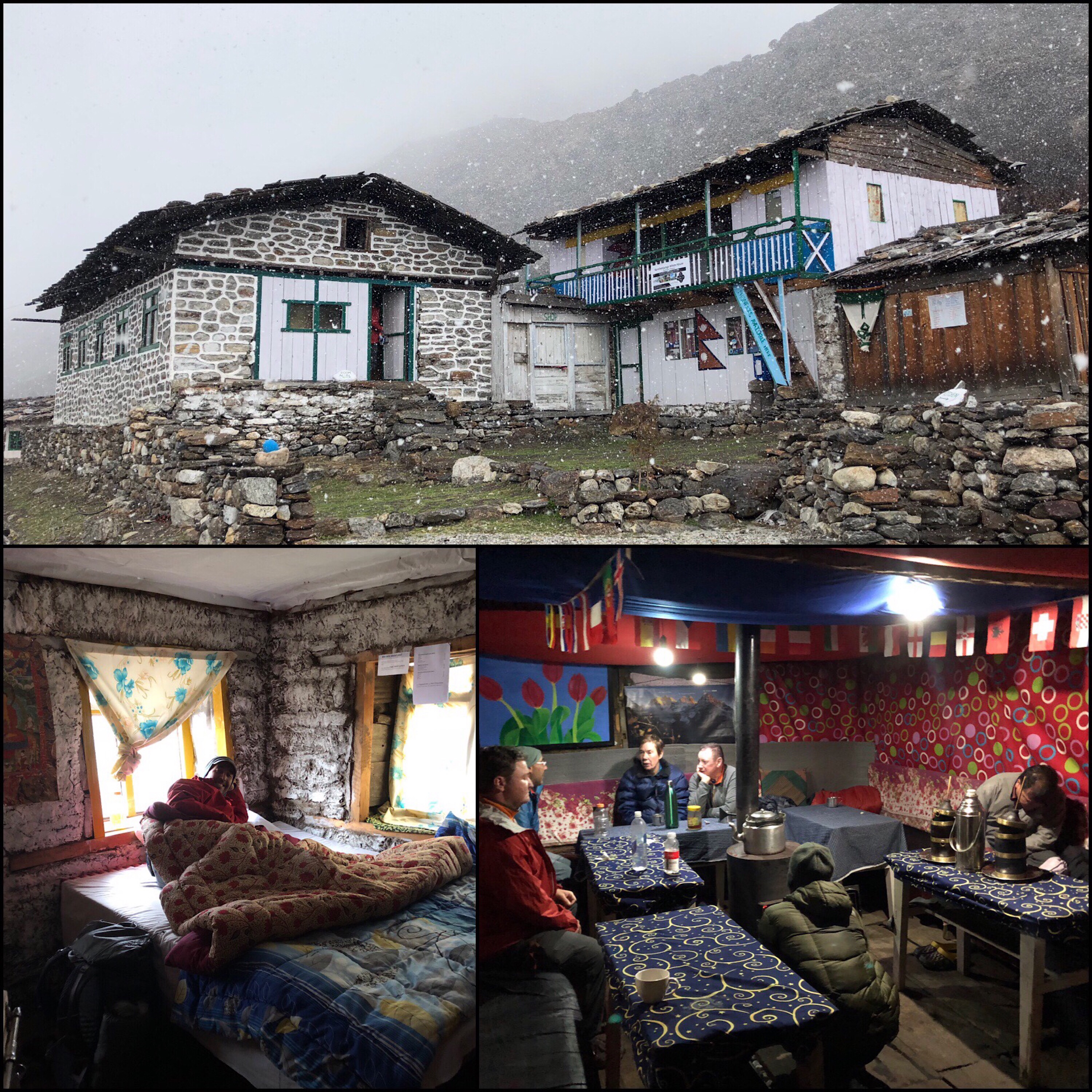 The rest of the afternoon was spent at The White House. The snow really came down and accumulated to at least 2”. Should be really pretty tomorrow, but we heard it will likely melt off quick. It is in the low 40sF/5.5C in the rooms. The norm is that rooms are not heated and the one warm area is the dining area, so everyone gathers there and socializes. There was a couple there from New Zealand that’s traveled all over the world, so we had great conversation with them. Unfortunately, their group moved on to Base Camp without them because she is recovering from stomach stuff and also on cipro. She is a pharmacist, and made me feel even better about taking the Diamox. I have the 250mg pill that you take half of twice a day. Buck-30 has what the woman says is the older suggested dosage of a 500mg timed release pill. She said now some tests are recommending even just 125mg/day. I felt some tingling in a few fingers at one point today, but fine other than that. I’m shocked at how well I’m adjusting so far.

It was a good dinner with unique options. I split some spaghetti with Buck-30 and Griggs got down half of his mixed veggie/egg/potato dish. We turned in by 8pm. The cold and the Diamox will have us peeing a lot through the night. The walk out to the toilet can be tough in these cold temps. I’m jealous the guys have pee bottles. I’m going to try my good ol’ Ziploc strategy to cut down on the trips out of my room. We will see how tomorrow goes. It will be the highest Buck-30 and I have ever been, over 15,000ft/4572m!