Today was the big moment. What we’ve been building all week for. We had the hike up to Kanchenjunga Base Camp to officially tag the start of the GHT and return to Lhonak to sleep at lower elevation. We wanted to try for clear views of Kanchenjunga, the third highest mountain in the world (28,169ft/8586m), so we got going at 6:10am. It was 29F/-1.7C when we left Lhonak and the morning fog was lifting for some pretty great views. 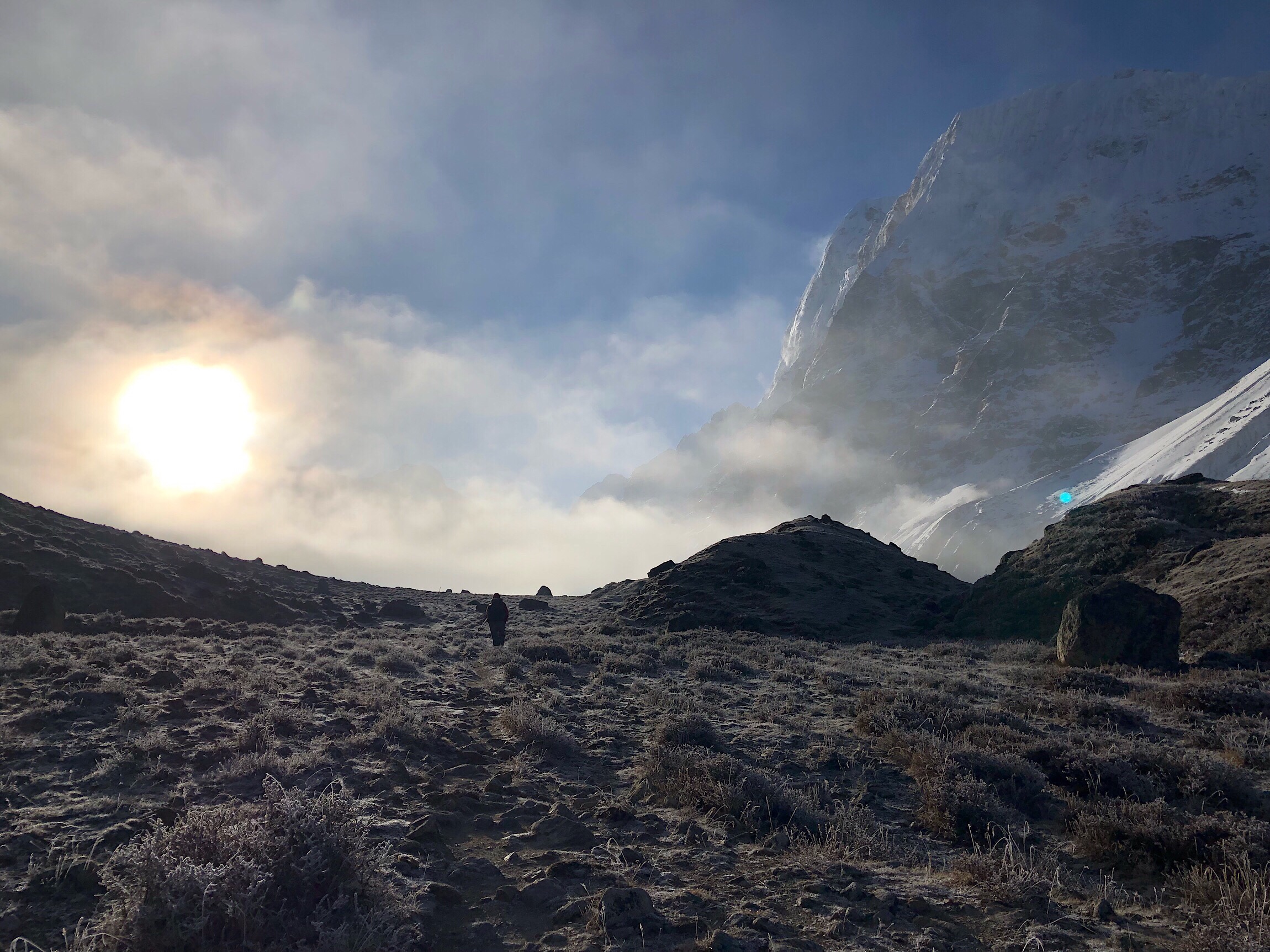 Thankfully, there was little wind, and we were gradually climbing up, so we easily stayed comfortable until the sun broke through the fog to warm us. My water bottle had chunks of ice in it pretty quickly. 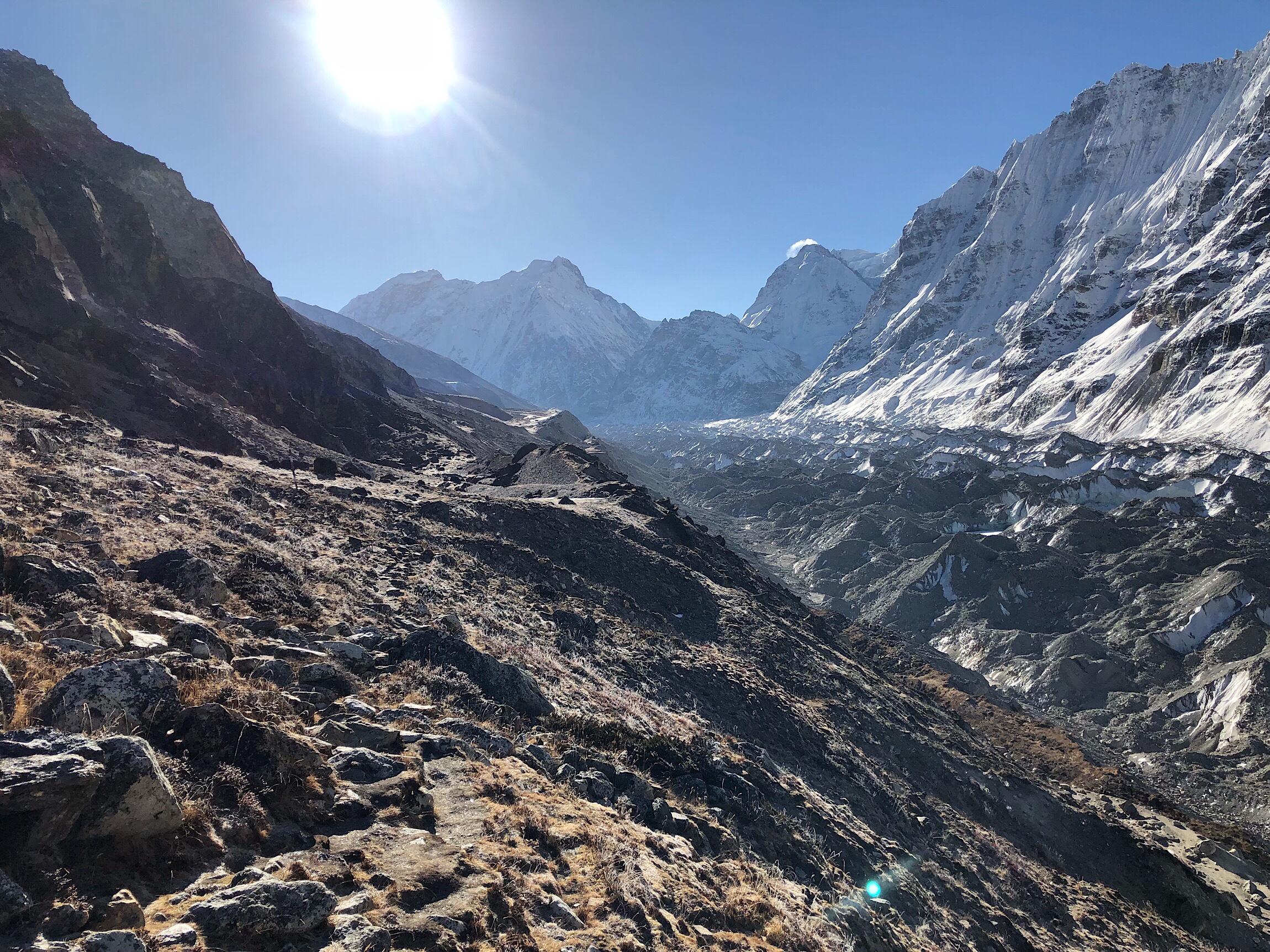 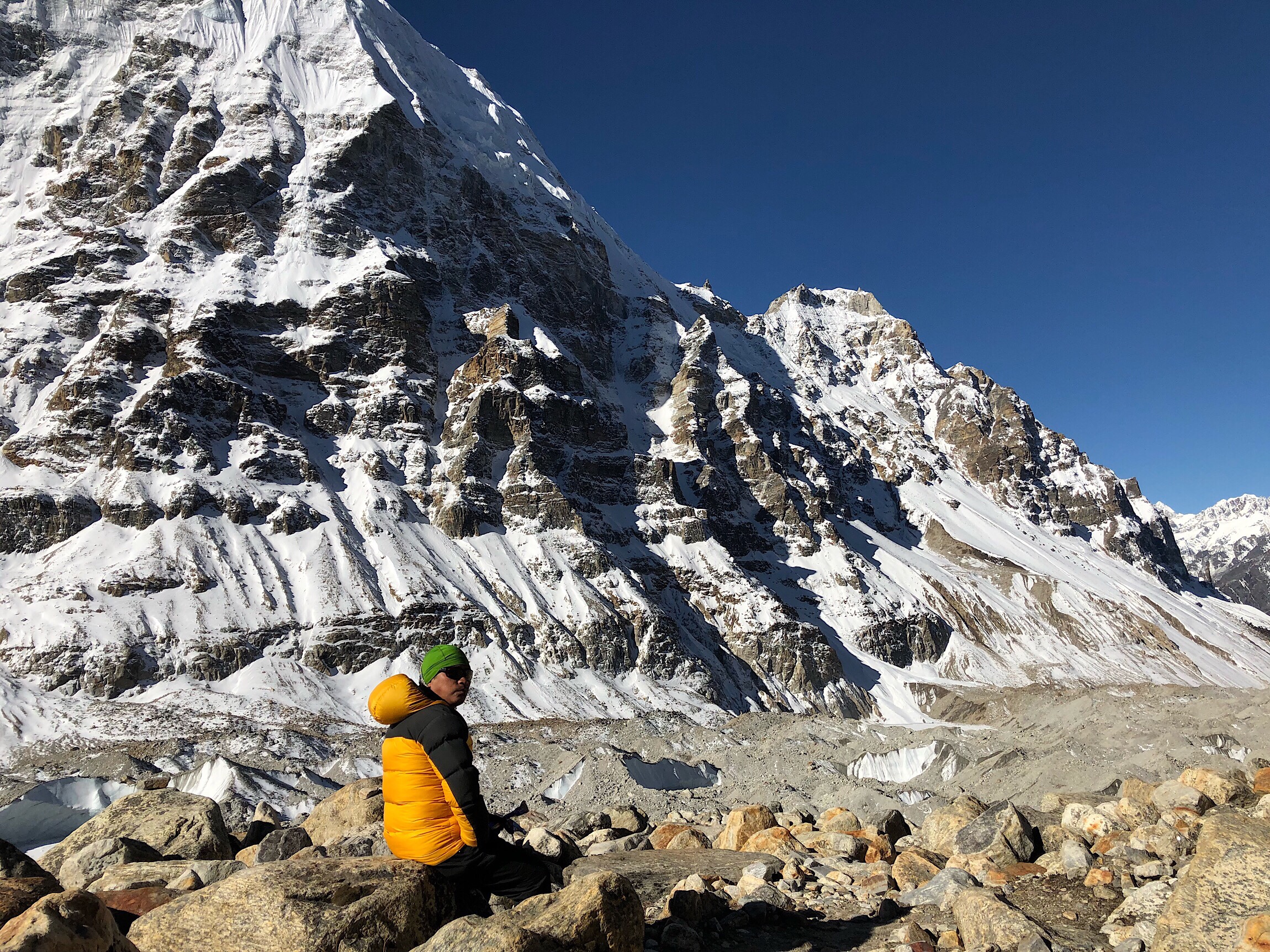 We were climbing from 15,600ft/4755m to 16,873ft/5143m. Shockingly, both Buck-30 and I felt great and have hardly had any elevation issues at all. I’d say just slower on uphill, but no dizziness or nausea at all. Maybe a moment of pressure in the head when we push hard, but nothing that sticks for long. Let’s hear it for Diamox! 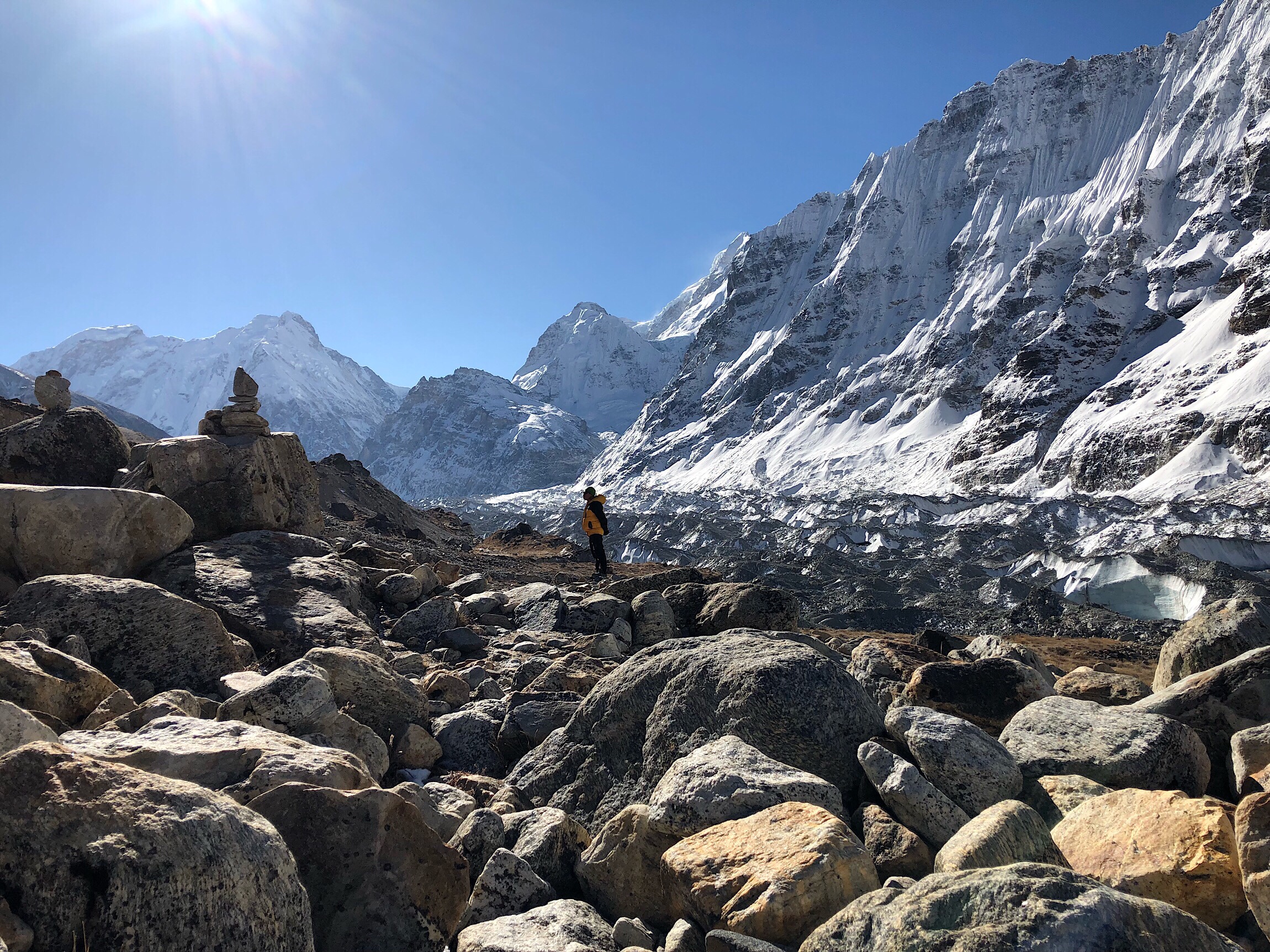 Unfortunately, Griggs’s mystery ailment is still lingering. He has been eating fine, but didn’t sleep well last night, and is still having some digestive stuff. He’s less open about communicating it than me and Buck-30 who feel the need to report every feeling, ha! Today, Griggs was having that completely depleted feeling I had a few days back. Especially on the steeper climbs. His other symptoms weren’t matching altitude sickness. He wasn’t out of breath, no headache, not dizzy. He took some of my Diamox just in case to help in the coming days if that is it. He was just feeling totally depleted. It will be rare days that our group will be feeling 100% as a whole, and it is expected that it will be at least one of the three of us at any given time that’s struggling. 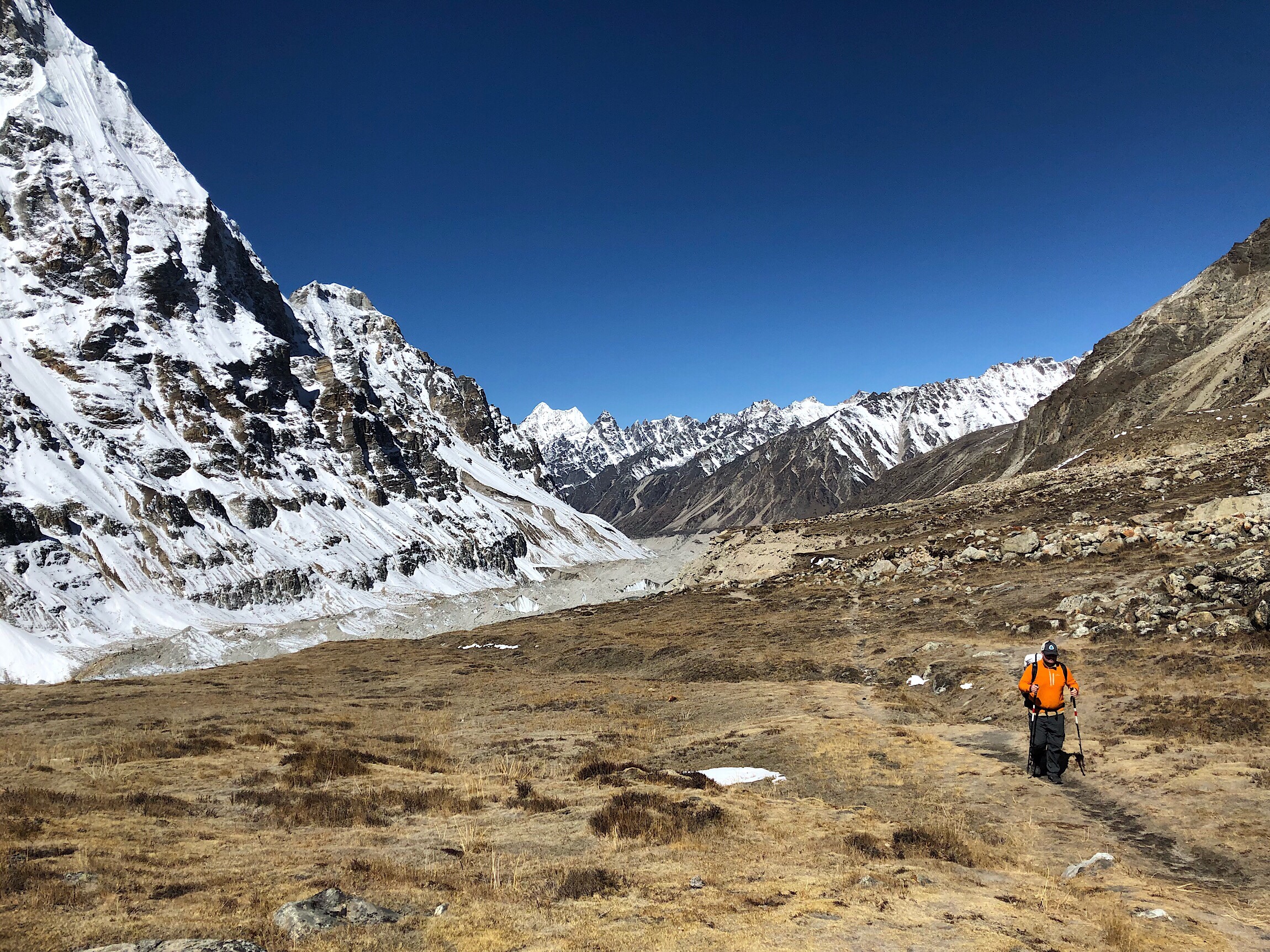 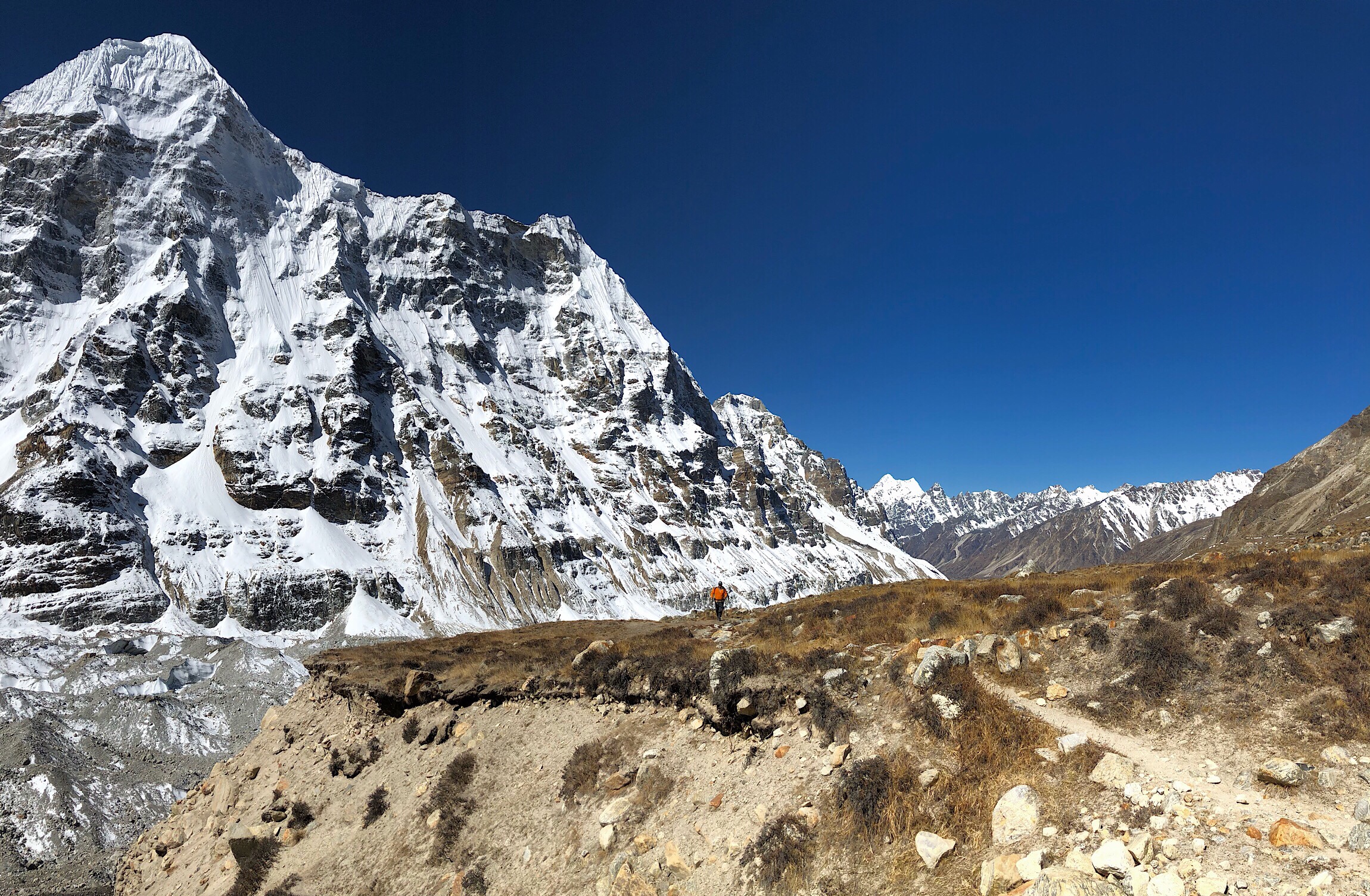 We spread out some, but could still be in eye of one another. Even with the exhaustion, Griggs was still able to make it up to Base Camp a good 15mins faster than the estimated 4hr book time. I think normally, he would have been an hour faster. A note to others, there was only one water source heading up to Base Camp, and it was just 30mins out of Lhonak. Then the small stream at Base Camp required breaking through some ice and scooping the water out. Also, the teahouse there was locked up, so if you wanted to stay there, you’d need to tent. It appears to be in use at times, just not sure when. Just beware. 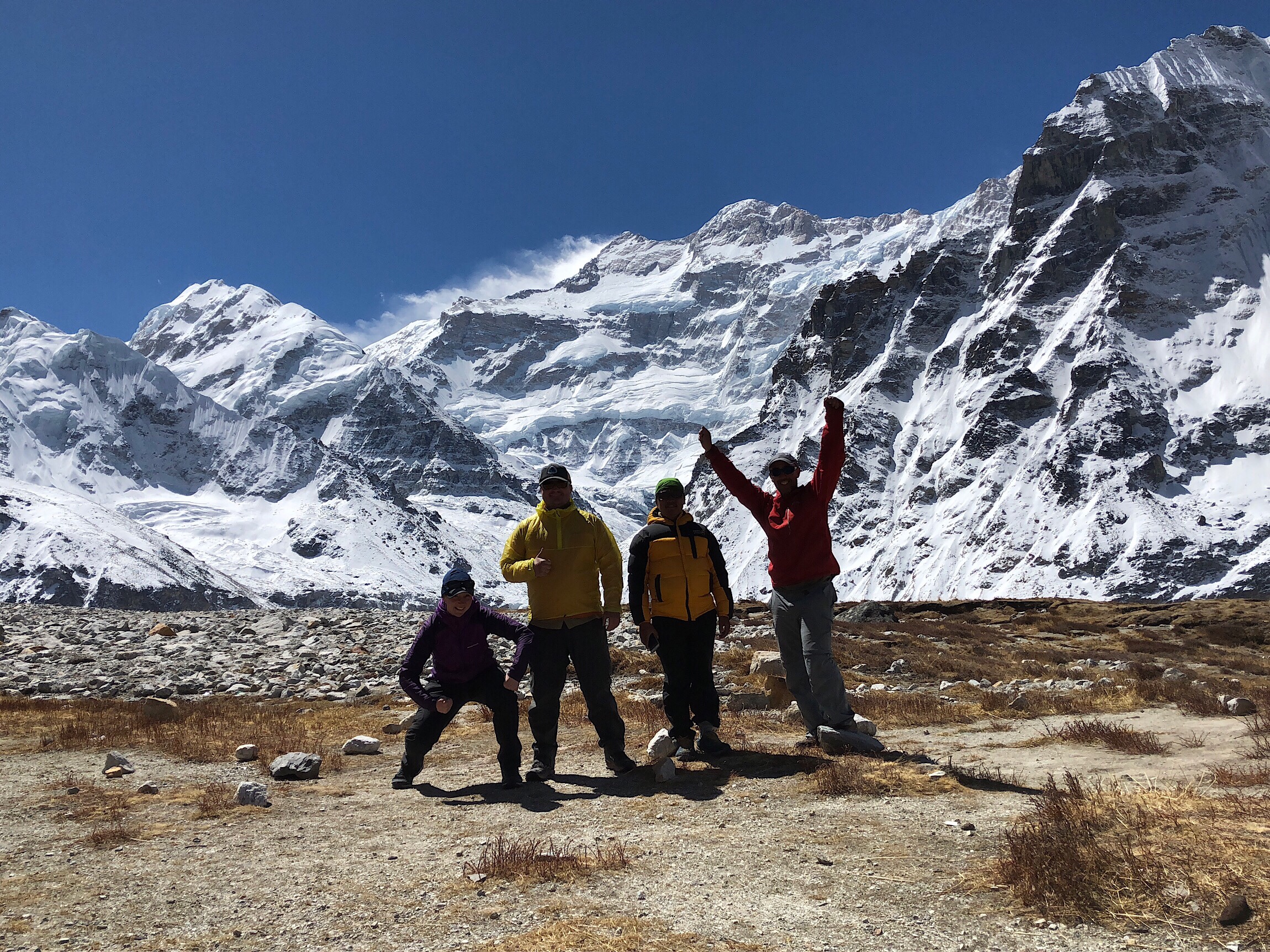 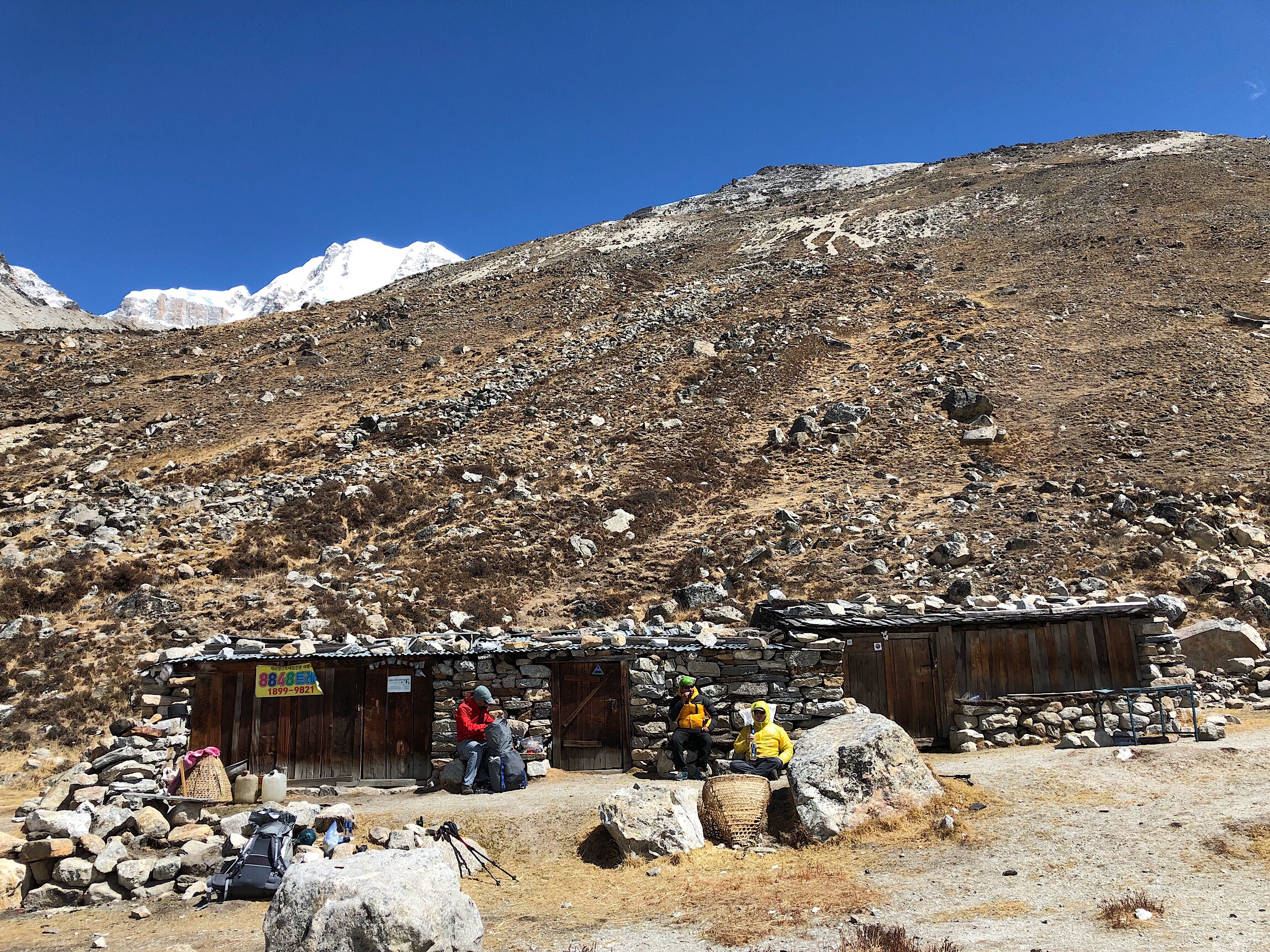 Kishor was back to his jovial joking self today, and we had a good time. He will be with us for 3-4 more days to the final guide checkpoint before we are on our own. We took our group photo and took in the view for a bit before heading back down to Lhonak. It was 10:40am when we left, and clouds were clinging to the mountains down valley. We were very happy we got up early to see it and had a good weather day. 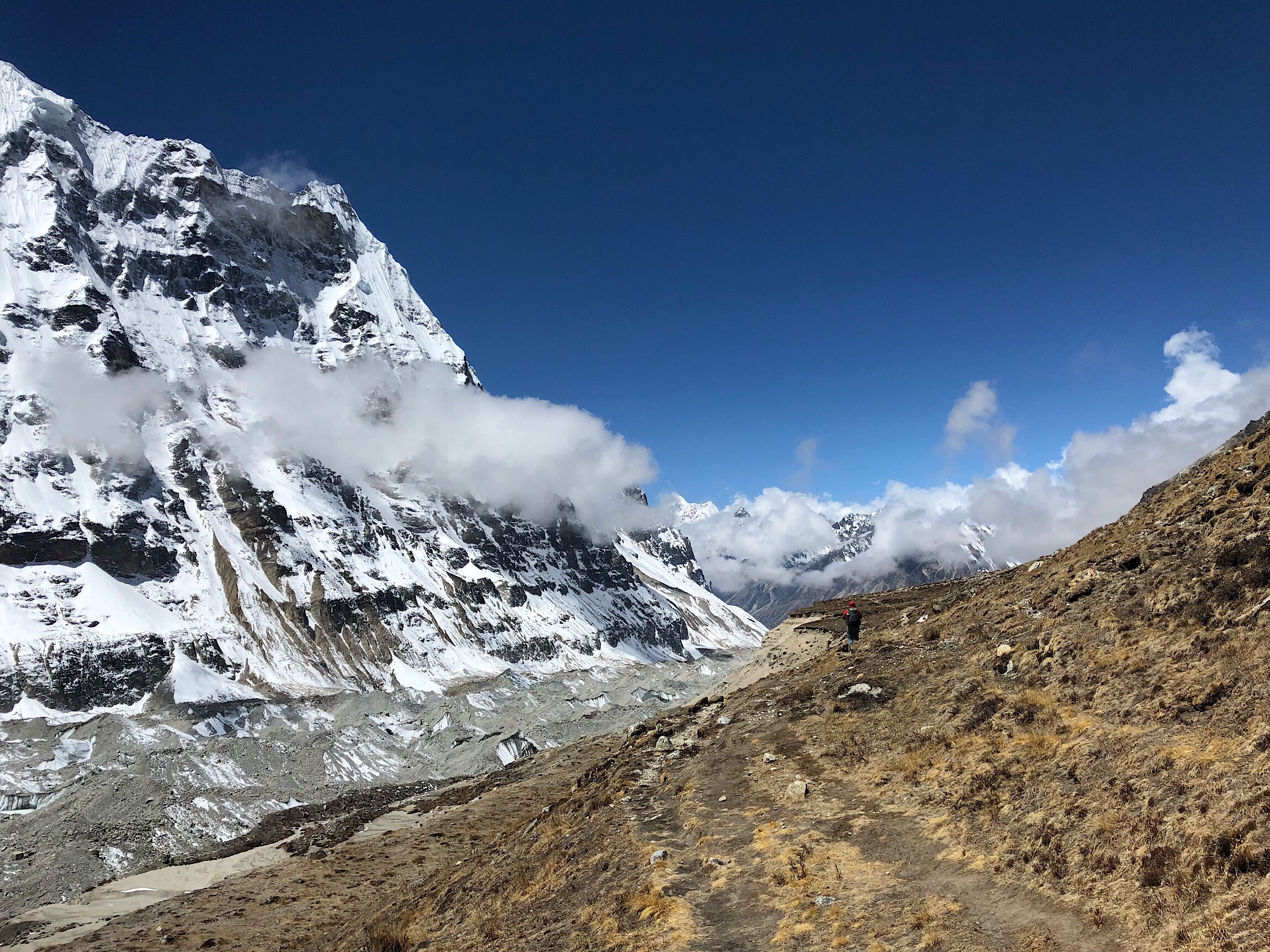 We decided to all go our own pace back to Lhonak and throw in the headphones. Kishor and Buck-30 were a handful of minutes ahead of me. We only took 2hrs to get back after just under 4hrs to go up. Griggs arrived 50mins after me, and we all took the afternoon to rest and relax. We have another half day like this back down to Ghunsa tomorrow before we go back to the longer hiking days as we finally head west across Nepal. It has been pretty wonderful to be able to rest and recover each day, and will be a tough adjustment in a couple days to longer days of hiking. Especially when we get our 7-8 days of food back in our packs! 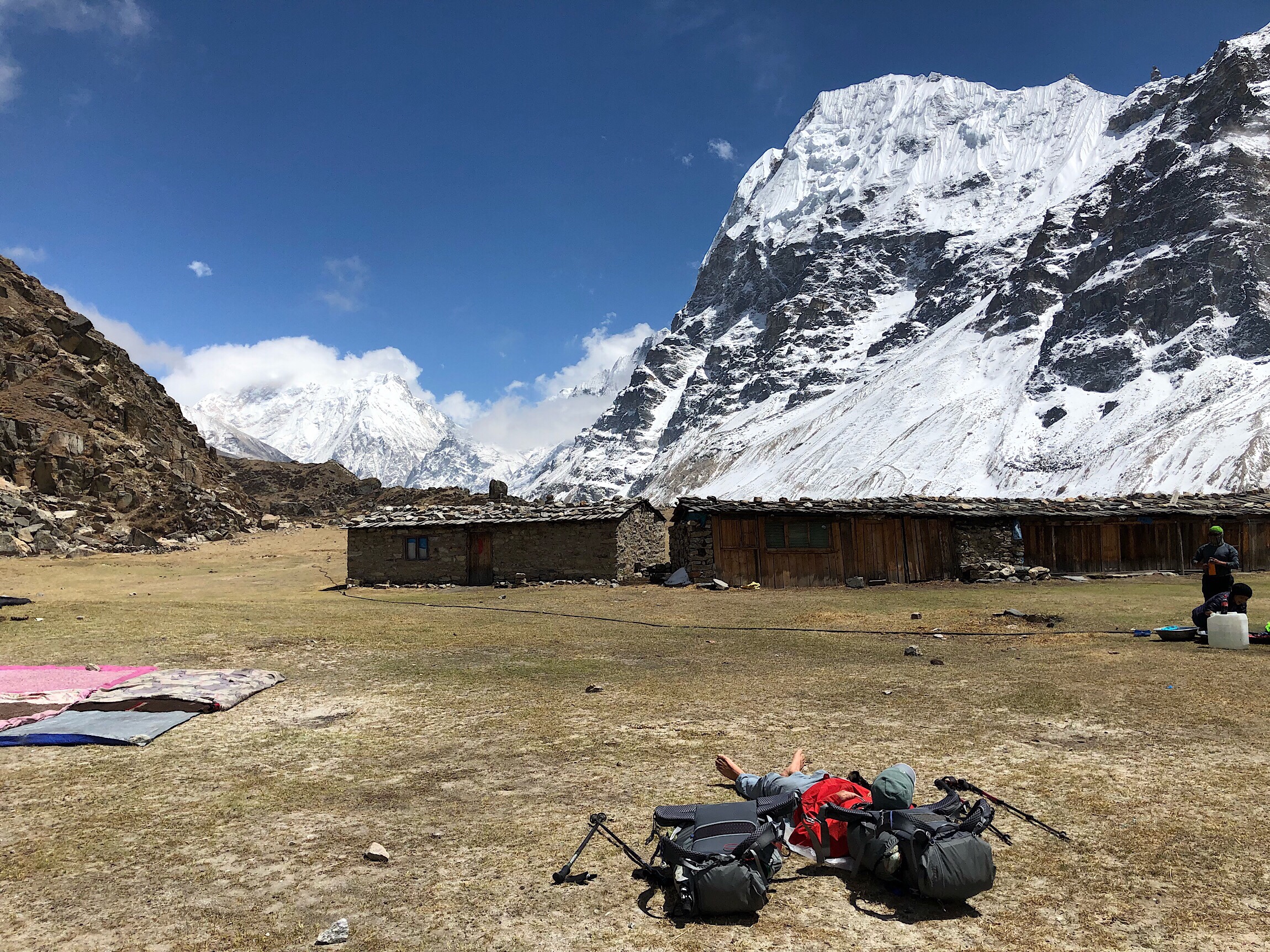 It feels like a time for reflection right now, which usually comes easily for me. I just don’t have it right now. Maybe I’m just adjusting still, or I’m just worn out, or maybe I’m still accepting that I’m back to nightly writing. I will say that it finally feels real. We’ve made it over the first major hurdle that marks time in a way on this hike. We are for sure racing a clock, and will just do what we can to get as far as we can or hopefully finish before the monsoons hit in June. We are right on schedule, and will just have to do what we can without concerning ourselves with what we can’t control. Tomorrow, we hike to Ghunsa. 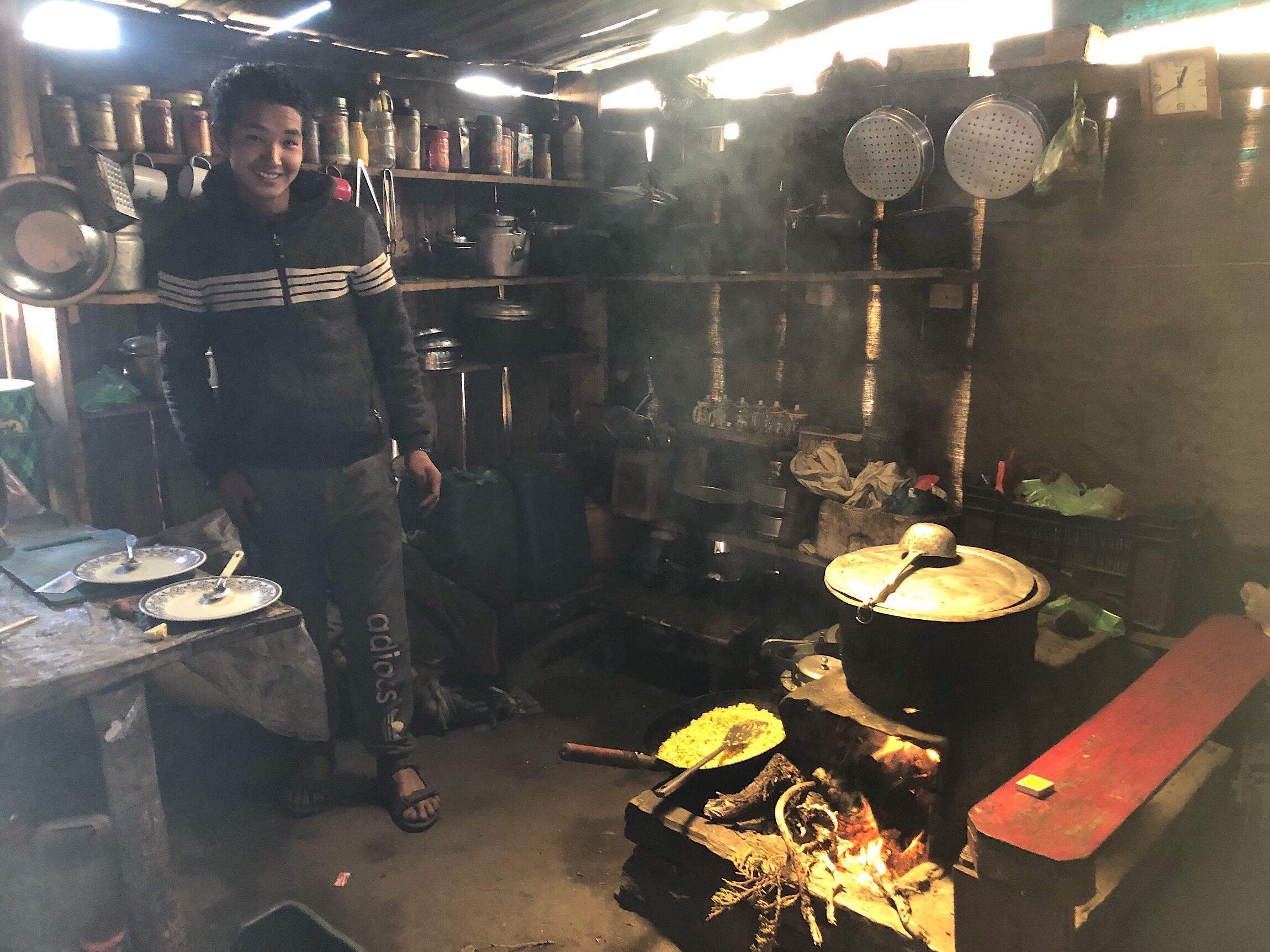 Our dinner being cooked for tonight.