Day 9: And Then There Were Two

As I went to sleep last night, it seemed I may have burned my bottom lip on the inside with the sun. It was quite swollen. I woke up and it was super swollen. I meant to get a photo, but today got away from me and it is much better tonight. The guys said it looked like an allergic reaction even. Maybe it was or maybe I got bit. At least it’s healing quick. I finally got a photo of the smoke that every home burns early in the morning for religious reasons. It wafts everywhere and is difficult to take at times. It can even make its way into the rooms at times. It’s an interesting ritual and way of starting the day for many Nepalese. 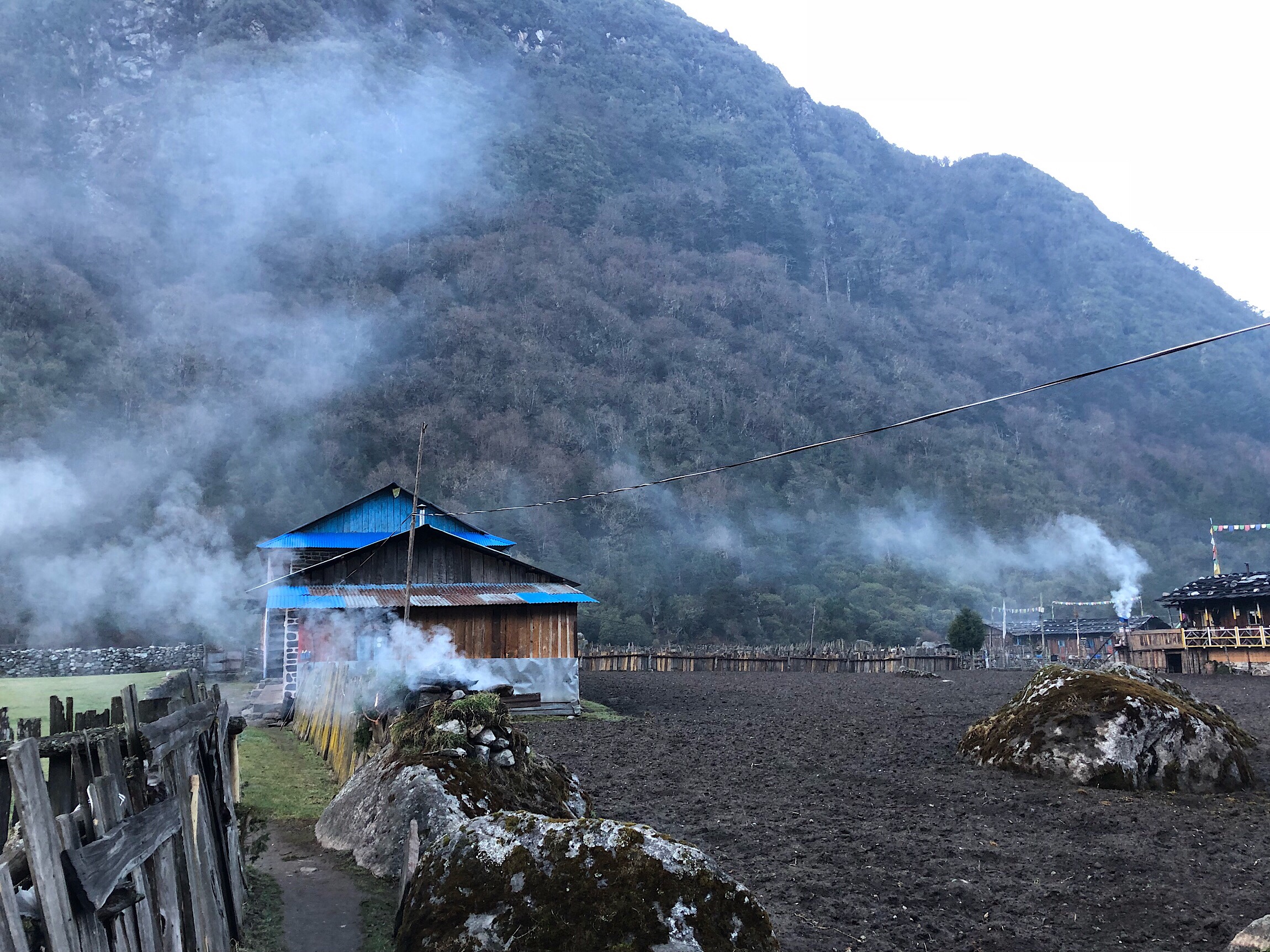 Unfortunately, Griggs woke up today feeling even worse today despite sleeping at lower elevation. His ailment is a mystery. He isn’t showing signs of altitude sickness or any kind of stomach bug anymore. He’s just completely exhausted and feels like he’s fighting something off. He said last night he had the chills as if he had a fever. It’s been a good 5 days of this, and it doesn’t show any sign of improving anytime soon. With the killer climb we have today, and the fact that the GPS on Griggs’s phone stopped working yesterday, we knew it wasn’t an option for him to hike today. Also, with our tight schedule, there isn’t time to wait multiple days for him to recuperate when this ailment is not going away. After discussing it, we agreed that Buck-30 and I (and Kishor) would hike on while Griggs would return to Kathmandu for this coming leg. It is very important for Griggs to have continuous footsteps on a long hike, so this was not an easy choice. 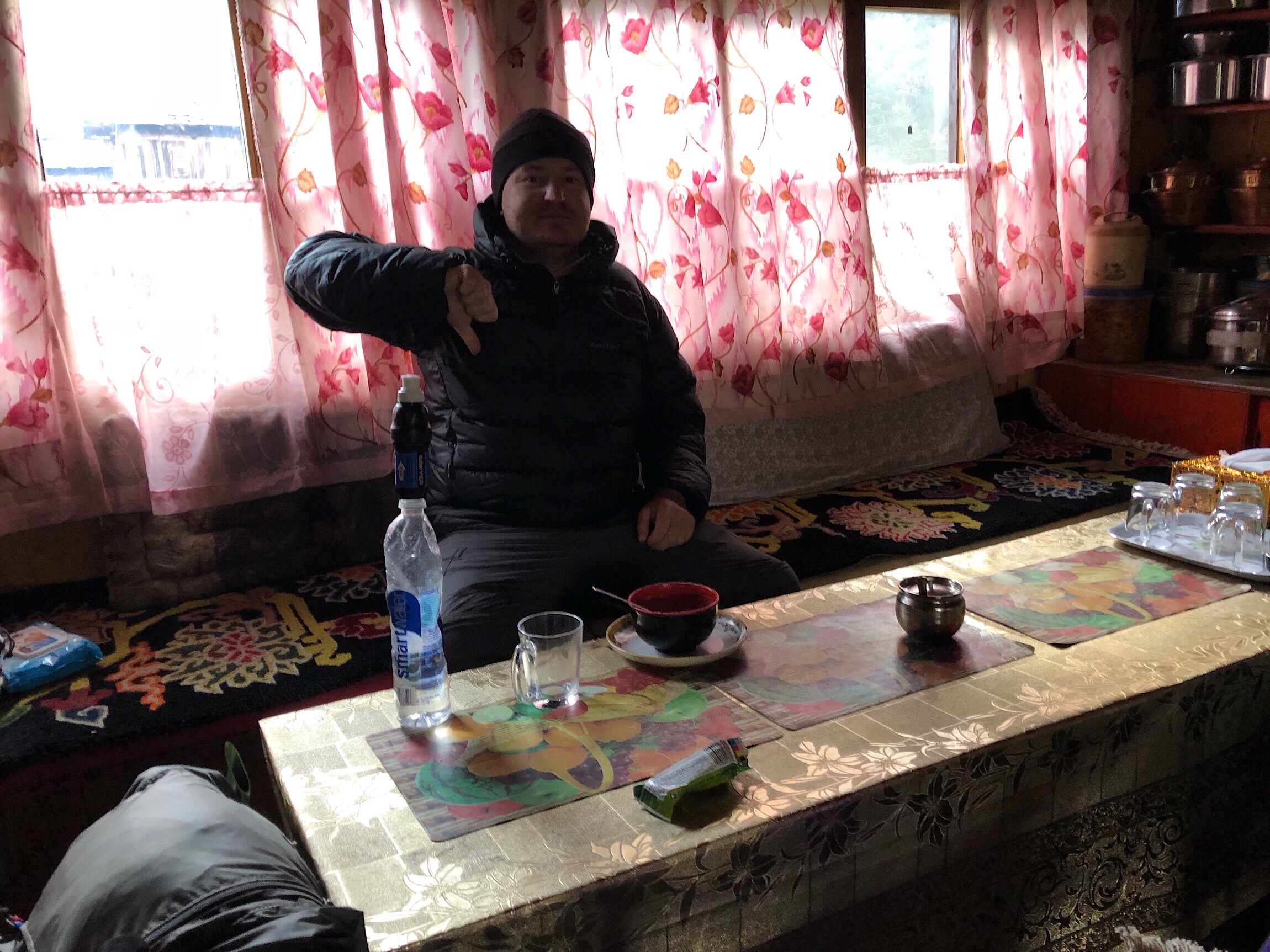 He will zero in Ghunsa today to hopefully get the energy for the 3 day hike back the way we came to the Suketar Airport. If there isn’t a flight, he’ll have to take a bus or jeep back to Kathmandu. From there, he will have to assess his options. In about two weeks, we will be in Lukla where he can meet us and join back in. If he is still sick, or is just over it after all that hiking and travel, and if his phone’s GPS still isn’t working, he may decide to fly home. There are just so many factors. We won’t hear from him again probably for 3-5 days through my inReach once he’s able to send a message. We will see…bummer. I did comment before this hike that this was one reason for having three people to hike the GHT. There are just so many factors that could send a member out for a leg, that it allows for the other two to continue on. It is very disappointing, but we know the GHT is just a different kind of hike and that this could still happen in the future to any of us.

So, at 7:30am, we said goodbye to Griggs and headed to our next big obstacle with Kishor, Nango La pass at 15,600ft/4755m. This would be our most difficult climb yet. We knew that going up 4,400ft/1341m over 4mi/6.5km at that elevation would take a long time. The strategy was just to keep a steady pace and rhythm of one foot in front of the other. The clouds were already on the mountains for the day, and the guidebook says that’s common for this pass. We eliminated the hope for views up high, and just hoped the afternoon precipitation would hold off until we were safely over. 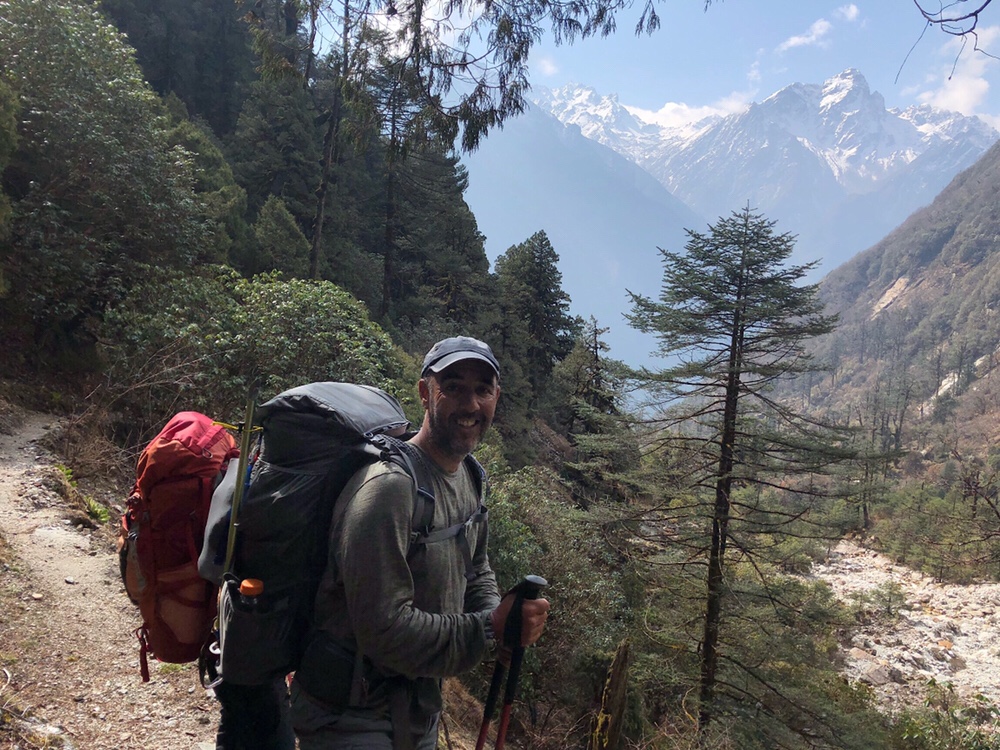 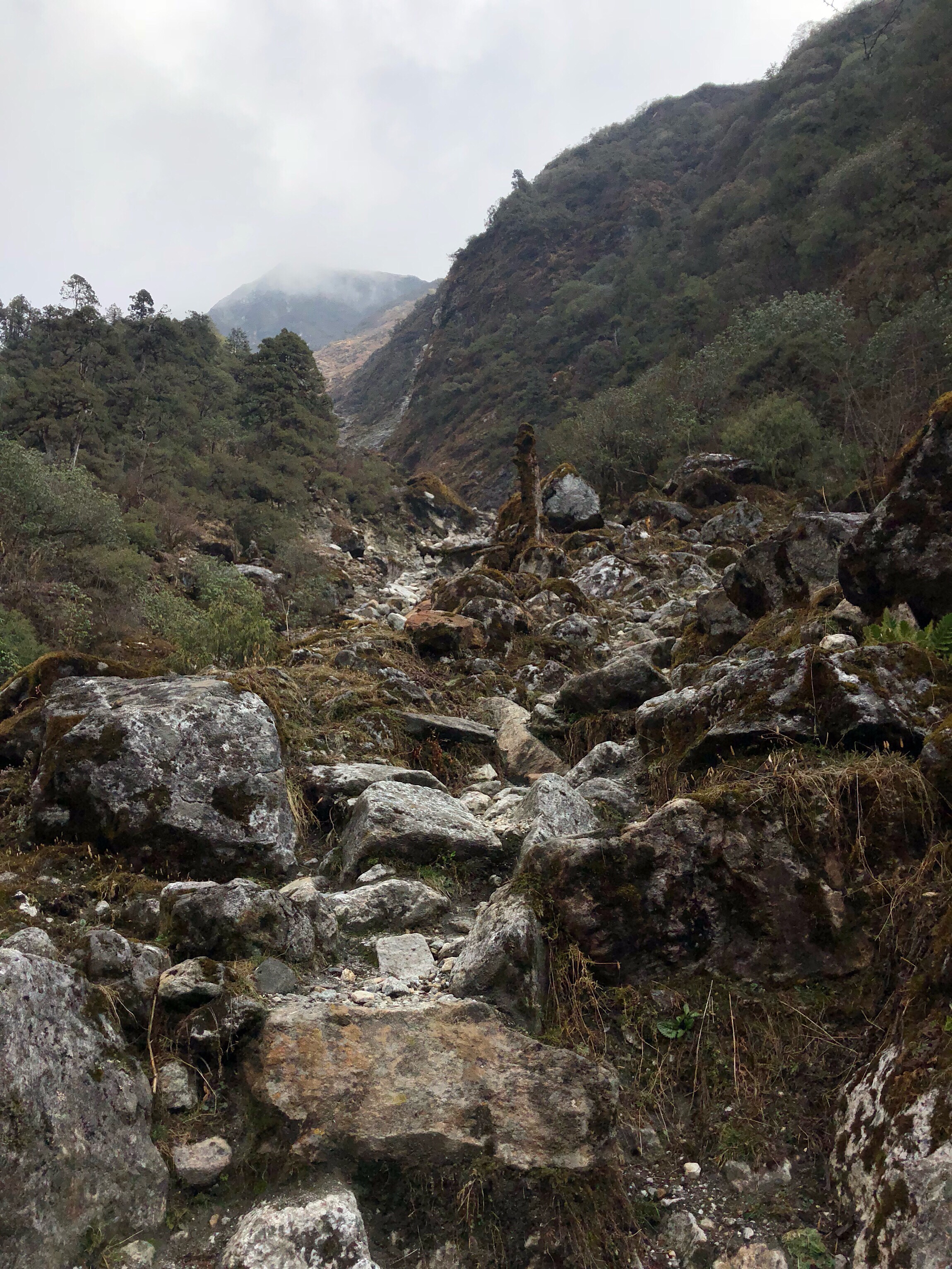 It took us 5hrs and 15mins to get to the top. With few short breaks, mainly to eat something quickly or change layering. The trail for the first part was not as hard to find as we worried it would be. It goes up just after passing a sort of statue or altar if approaching from Ghunsa. We were soon out of the woods and entered the fog. 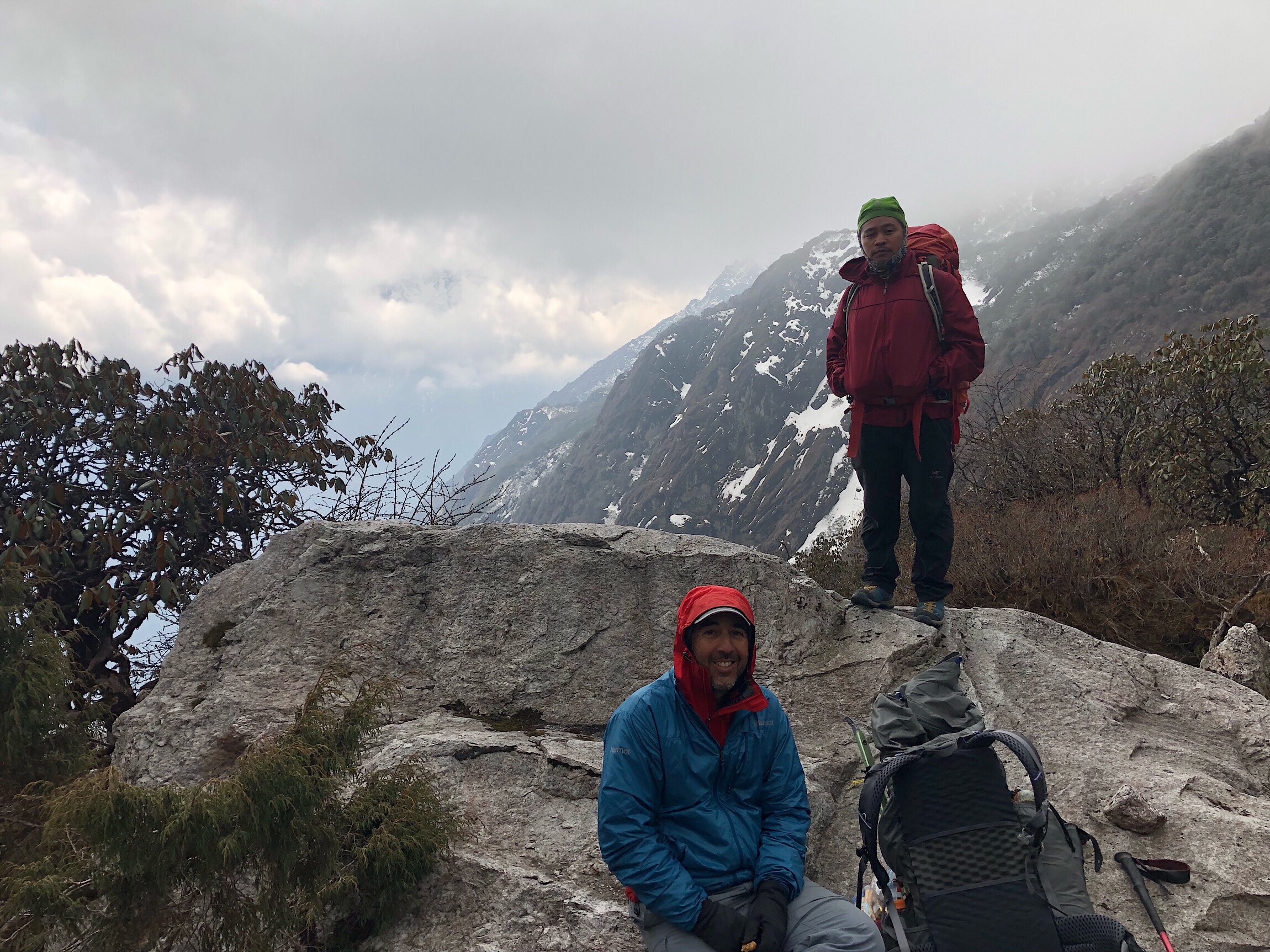 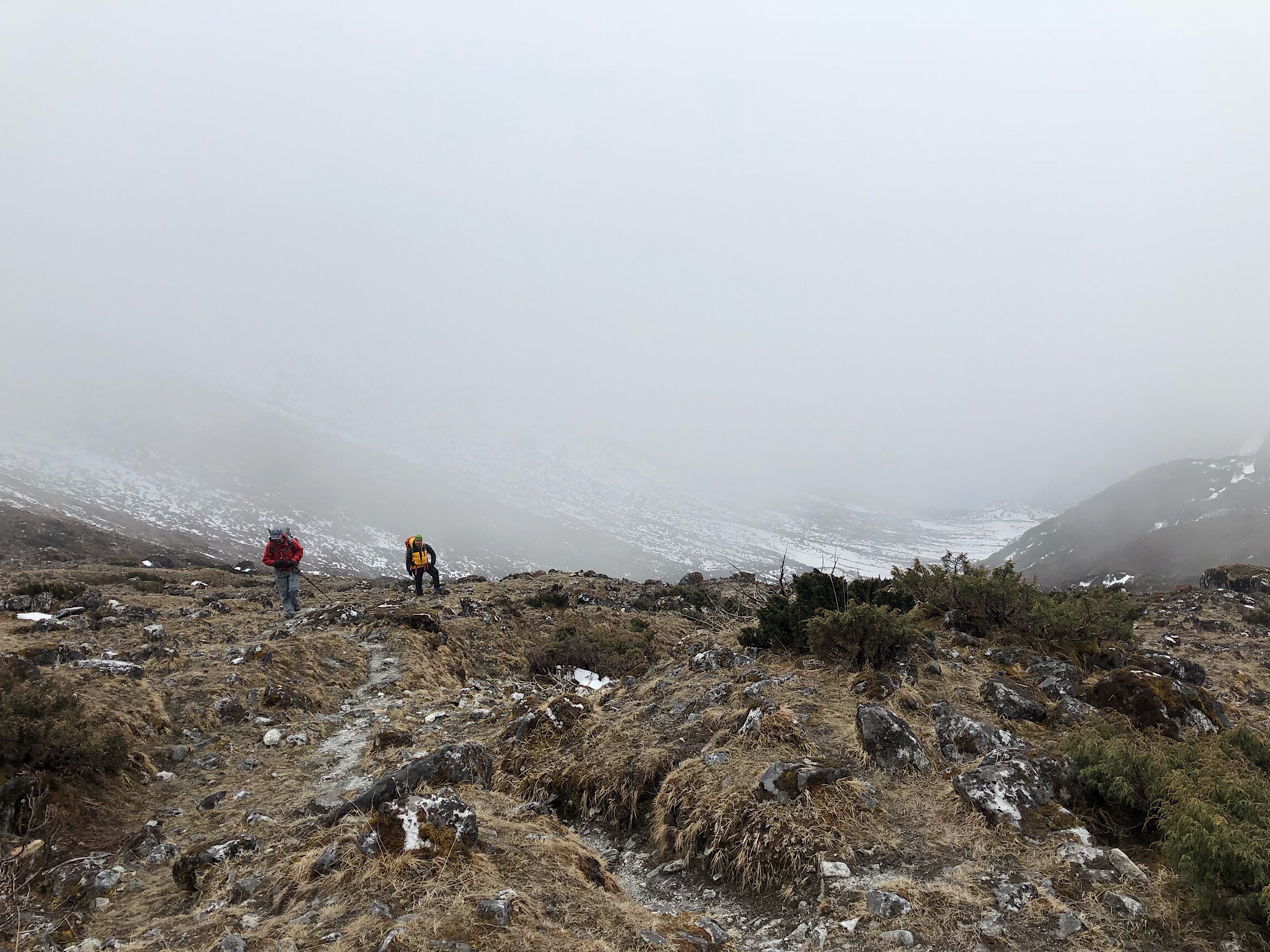 The path was fairly distinguishable, but would get a bit confusing in the stretches with snow. We heard there are two Swiss men ahead of us by maybe four days doing the first half of the GHT. There were still indentations from their passing through, so that helped to make navigation easier as well. I will note that there were streams we passed every hour or so, so no need to carry water from Ghunsa. 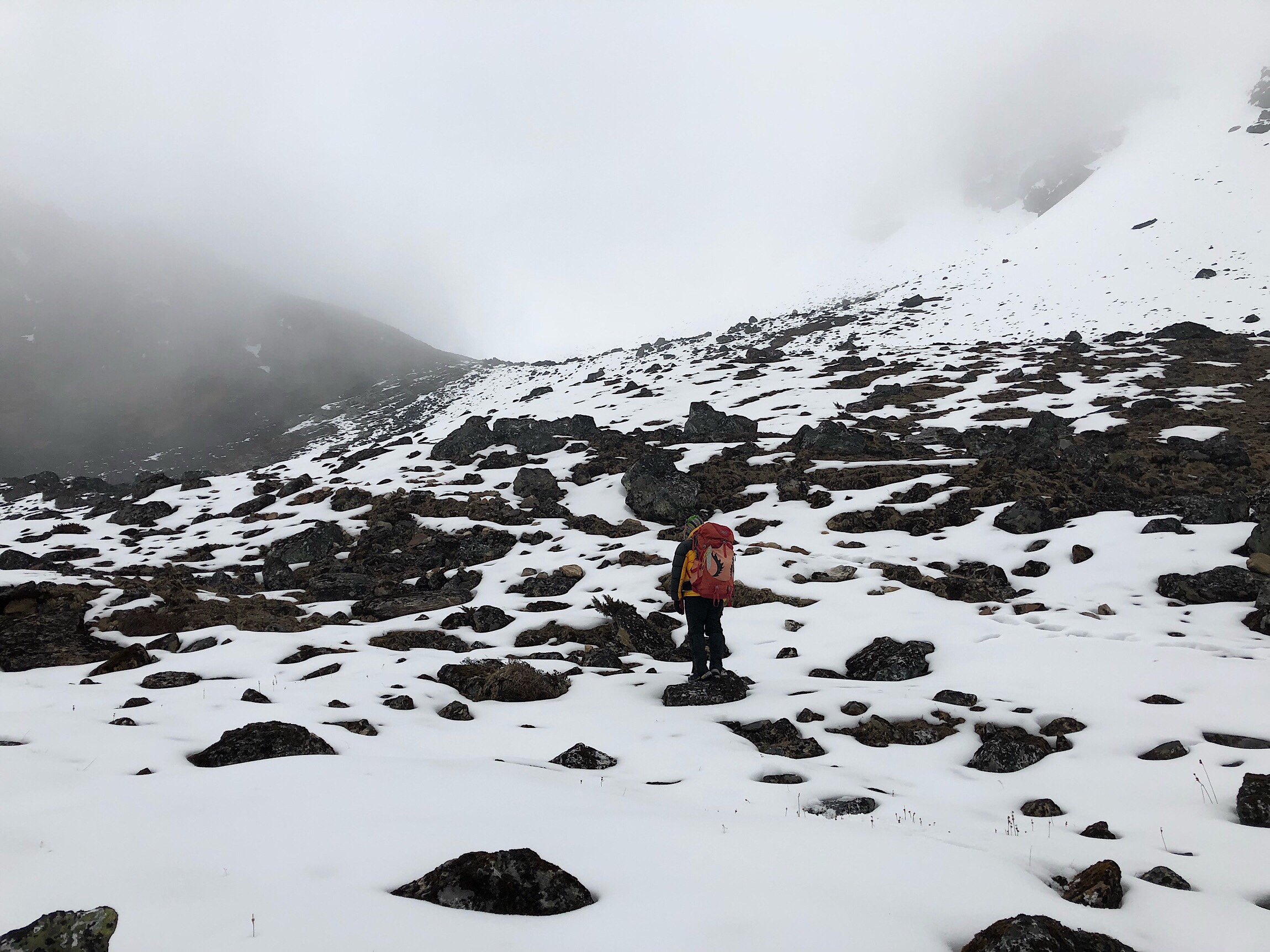 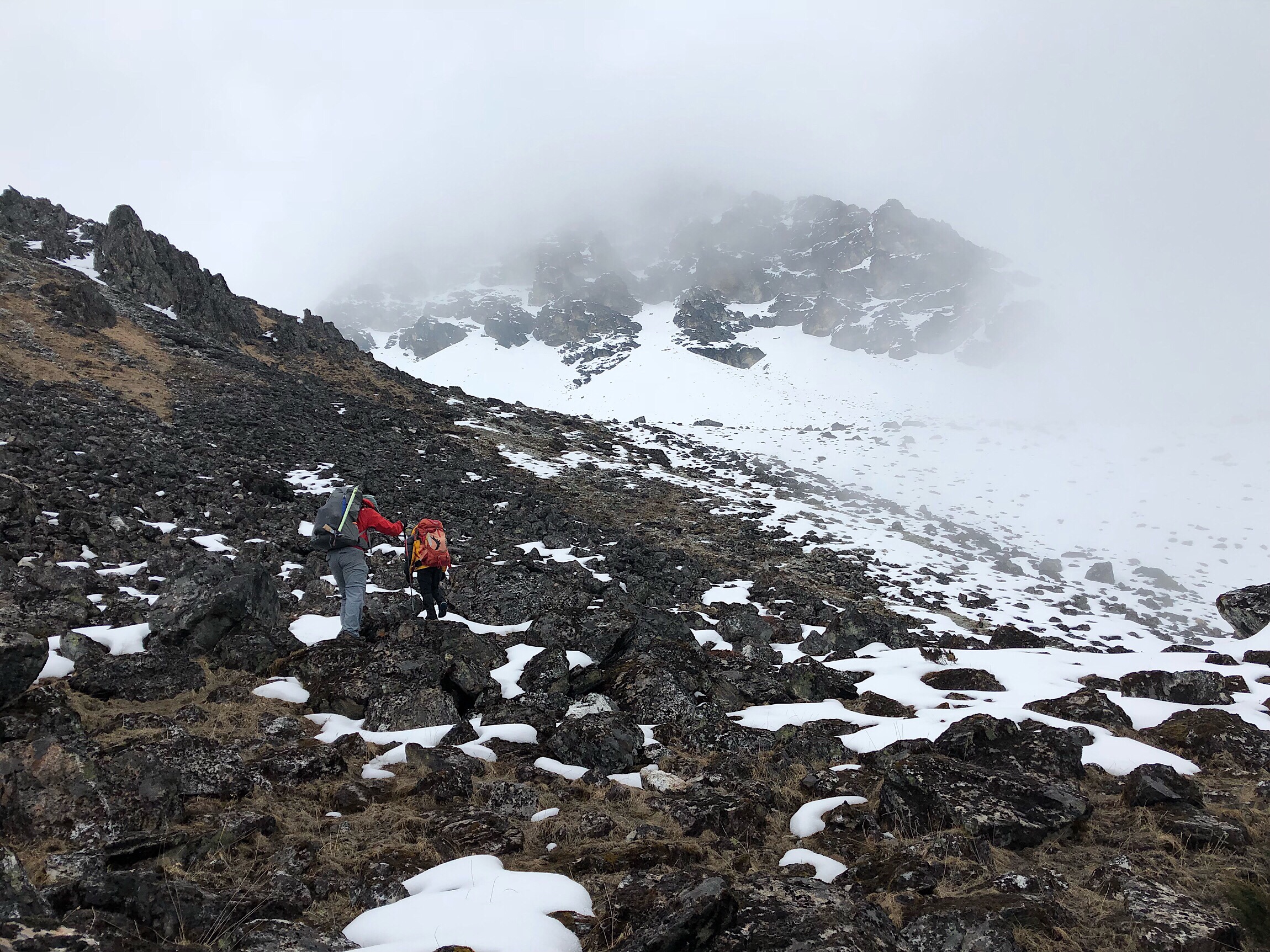 The last hour or so was very slow moving for me. Kishor took the lead in the snowy miles up and over and did a really great job of leading the way. The elevation had my legs slow to respond, and there was a lot of rock hopping to avoid the deep snow. It wore me out, and the guys seemed to do that with much more ease than me. The fog moved in and out, making visibility very minimal at times. There was a light kind of hail/snow mix coming down, but little wind, and we were surprised it wasn’t colder. 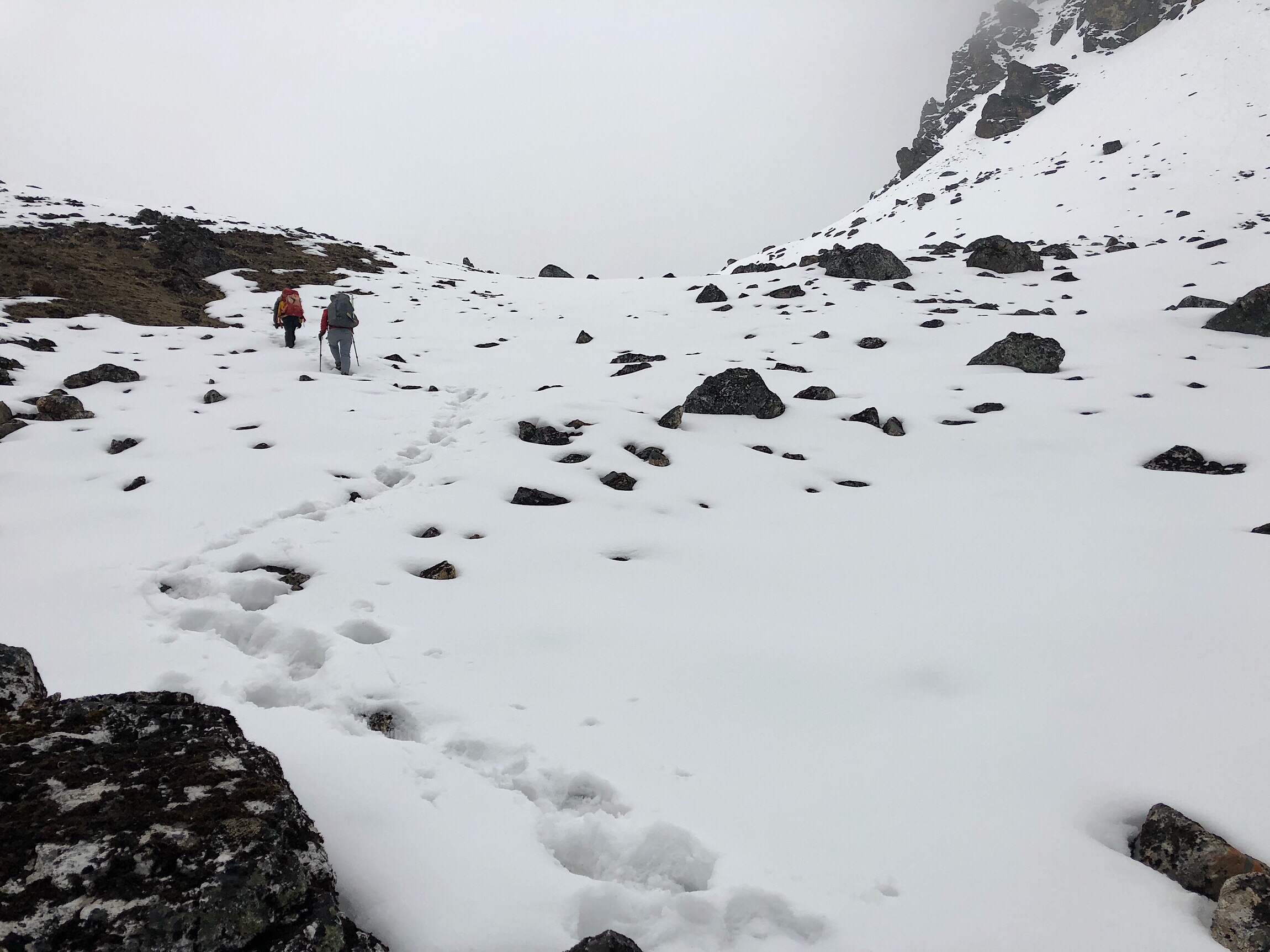 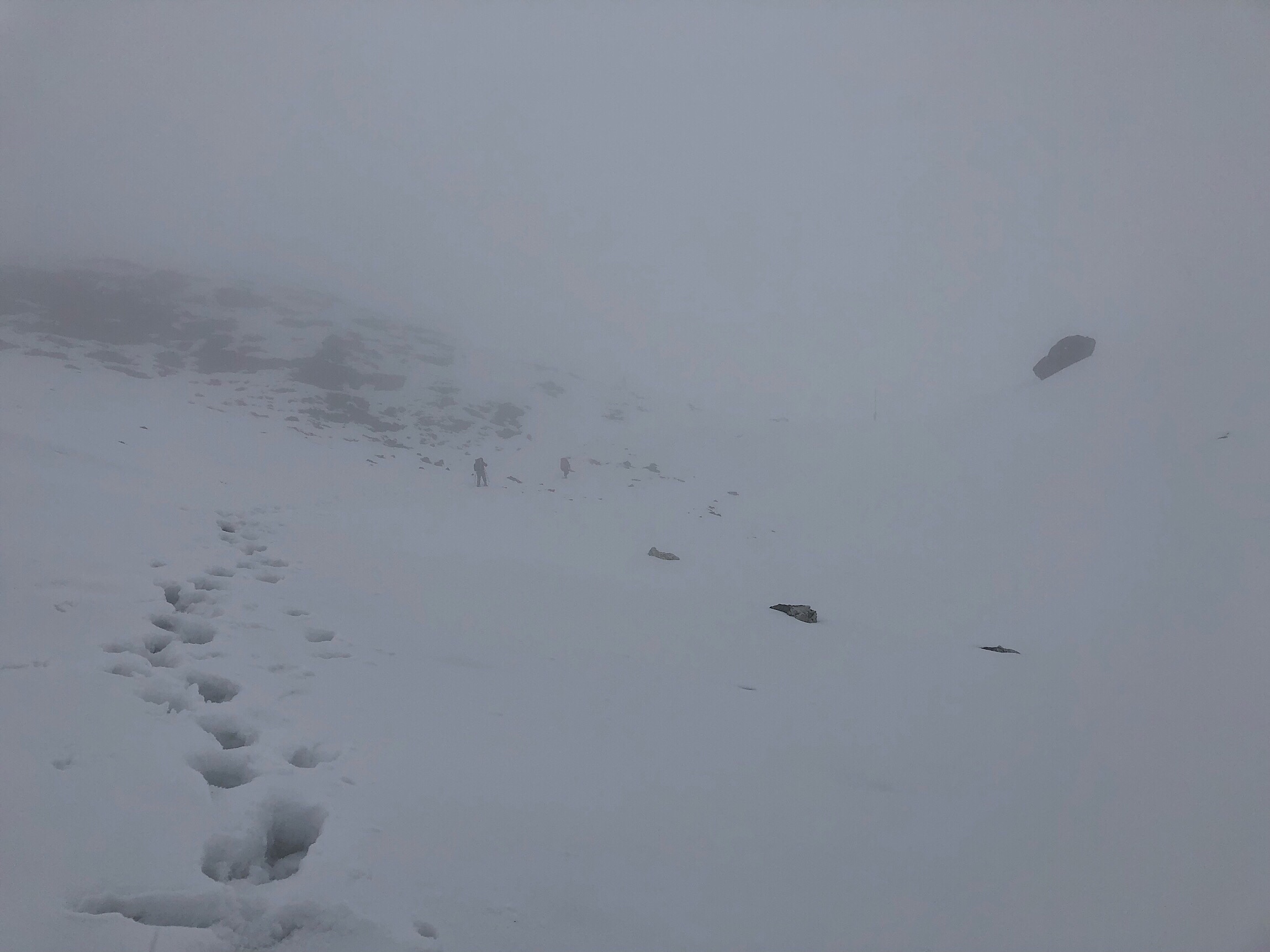 Once on top of Nango La Pass, we took some photos and headed down as quick as we could. The snow was much deeper on the back side, and we were anxious to get down and out of it. The snow was not compacting well, so there was random post holing up to our knees. Kishor again did an awesome job of leaping around in the snow and breaking steps. 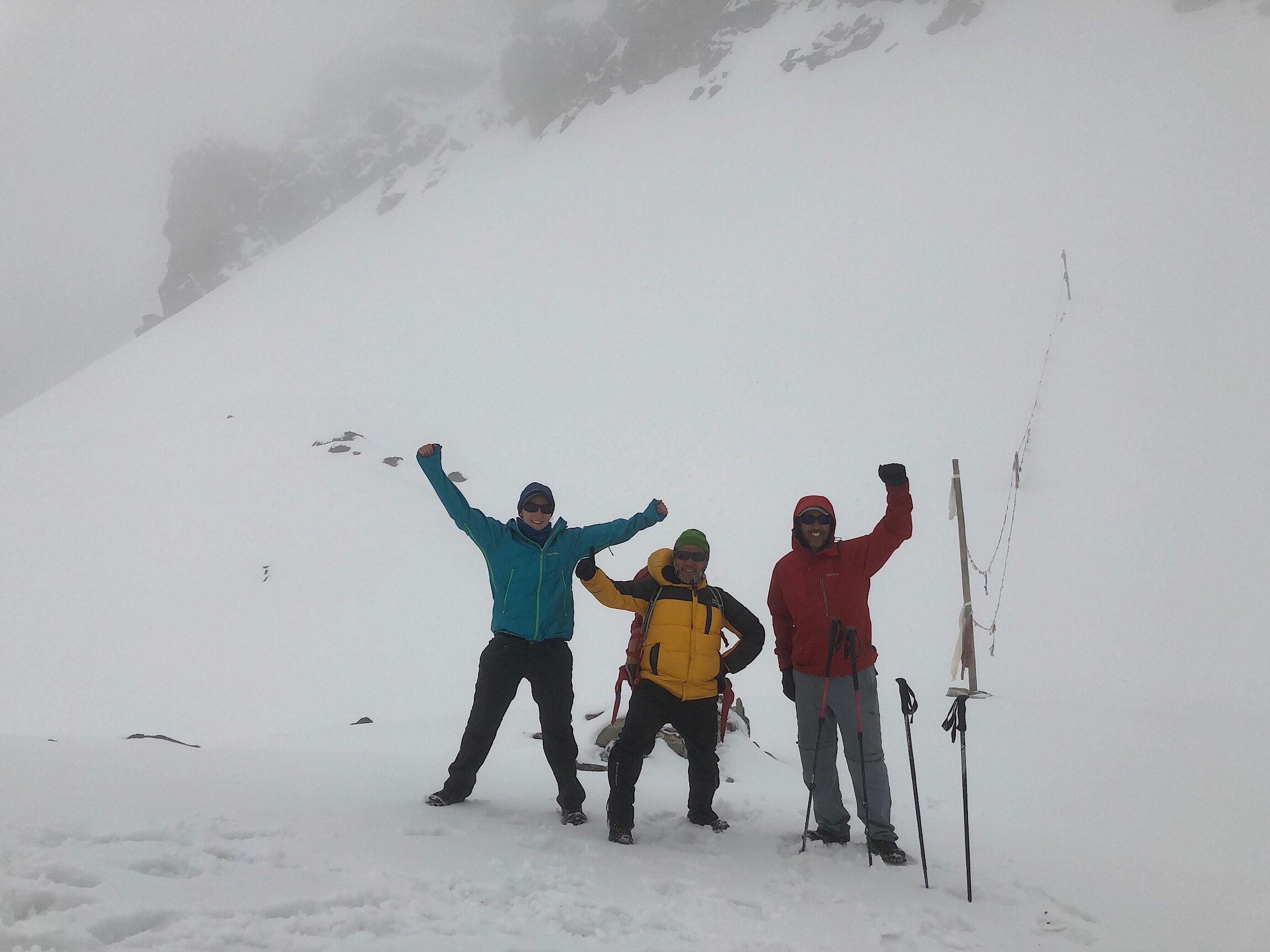 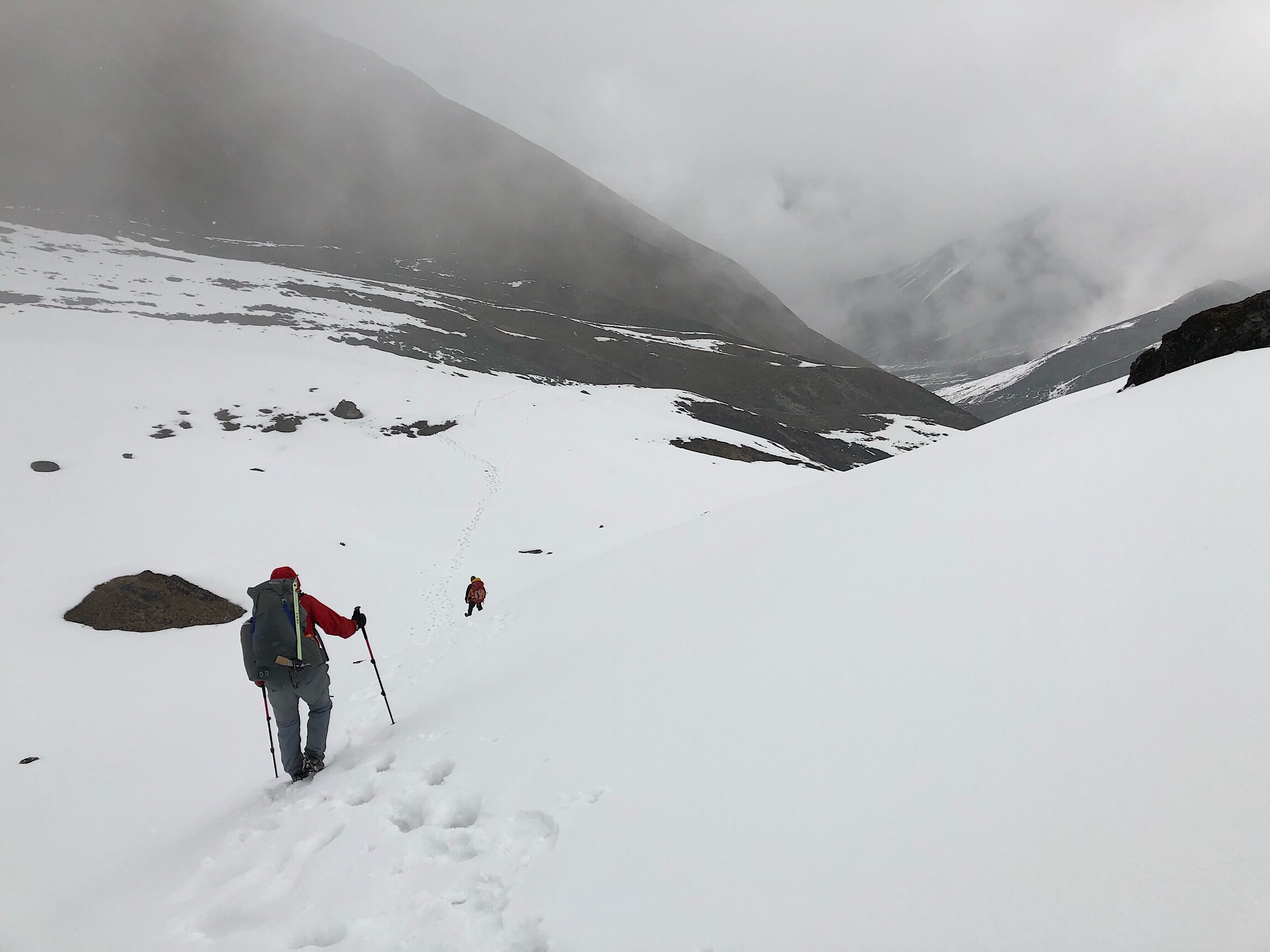 The guidebook and waypoints mention an old shelter about an hour down from the pass. The hail/snow pellets were heavy enough that we put on rain pants. I’m very happy with my decision to wear waterproof boots. We will see if I say that in a few days when we are back on the low route and in the heat. I couldn’t even imagine that today. The stone shelter didn’t exist anymore, but what did was a large rock with just enough of an overhang for us to huddle under. It was 2pm, snowing/hailing hard, and we needed to eat badly. 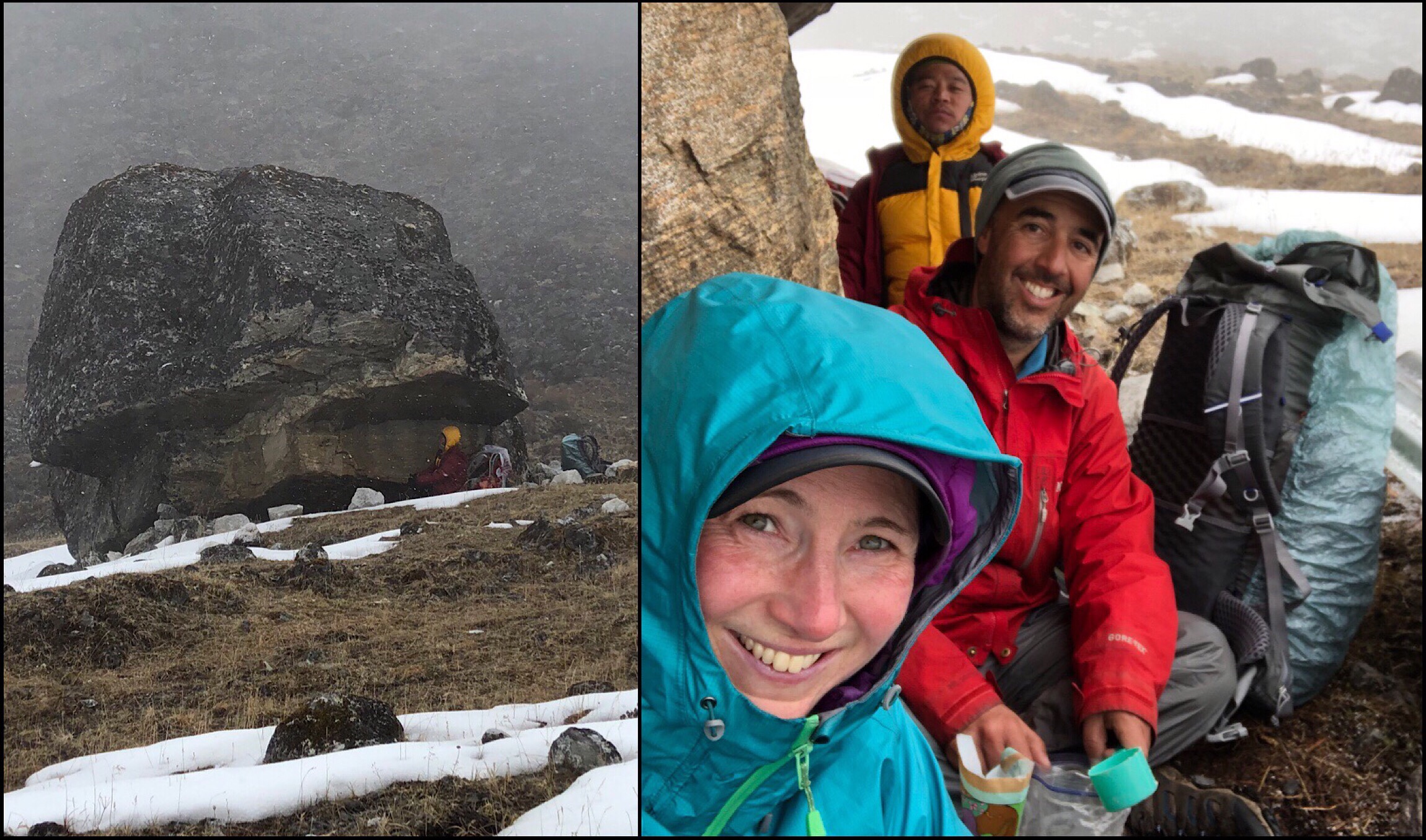 I ate some premade Uncle Ben’s rice and tuna. Buck-30 got water from a nearby stream and had a protein shake. I usually eat the rice for dinner, but was starved and it was easy to just open and eat. Problem was that I was uncomfortable given the conditions, and it didn’t settle well in my stomach. I had what I guess was heartburn the rest of the day, and it was super uncomfortable.

It cleared up just as we finished our lunch, and then just came back randomly on and off the next couple of hours. The snow/hail would come down hard at times and completely cover footprints in a minute, so we found we needed to stick close together. The terrain was my worst terrain. Slippery loose rocks. I also had a muscle I must have pulled in the downhill yesterday just above the upper inside part of my knee and into my thigh. It was fine as long as it wasn’t on jarring steep downhill…which was our last couple hours of the day, ugh! It’s always something isn’t it. That combined with my fear of slick wet rocks had me moving very slow and I felt terrible! 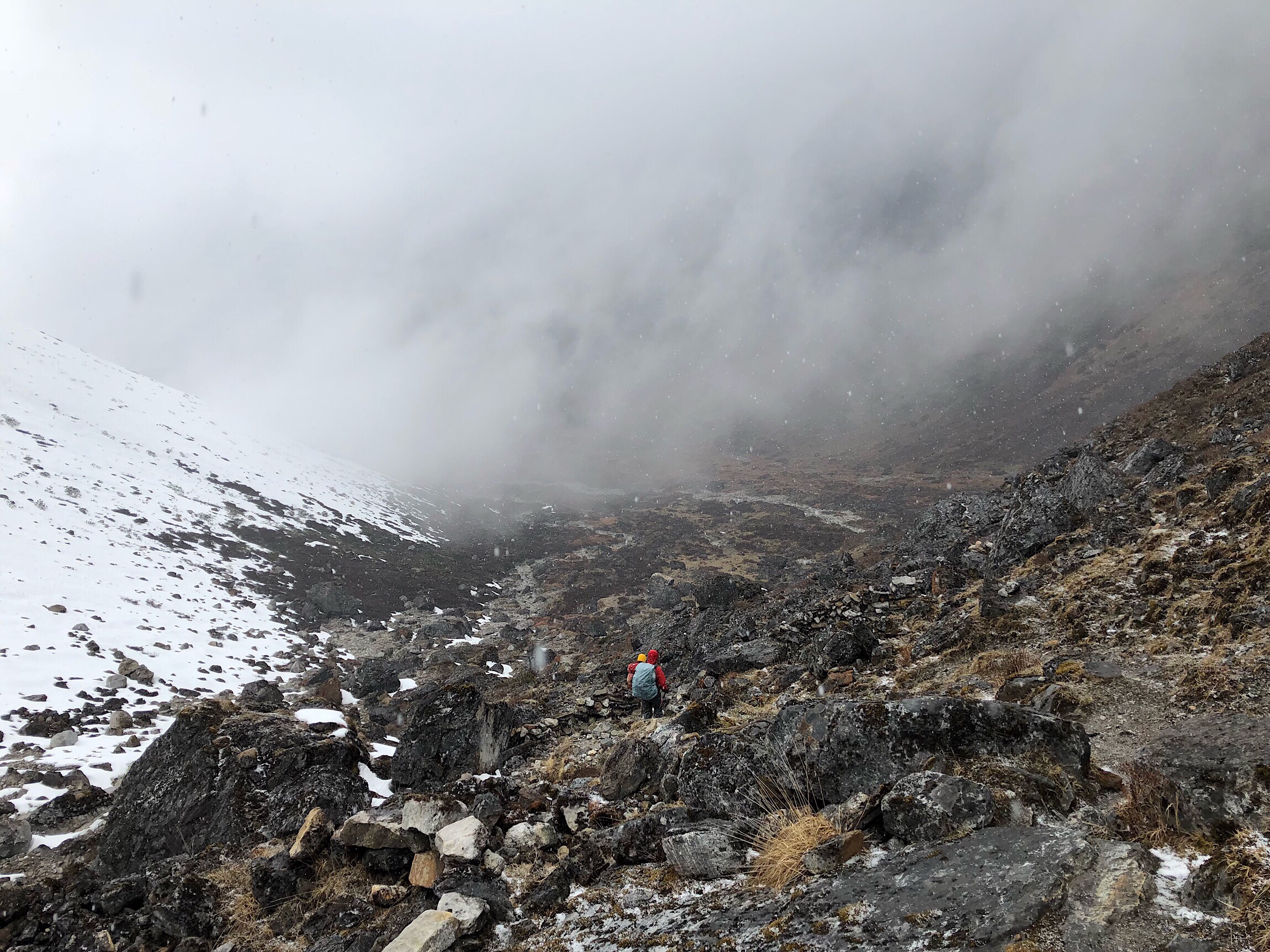 The break and cold had made it really seize up, and it was quite painful. Buck-30 and Kishor were quite patient, but we should have flown through that downhill. I’ve taken some Aleve and have done what I can to massage and stretch it. Just hoping it is better tomorrow. It’s really frustrating that it always seems to be something out here. 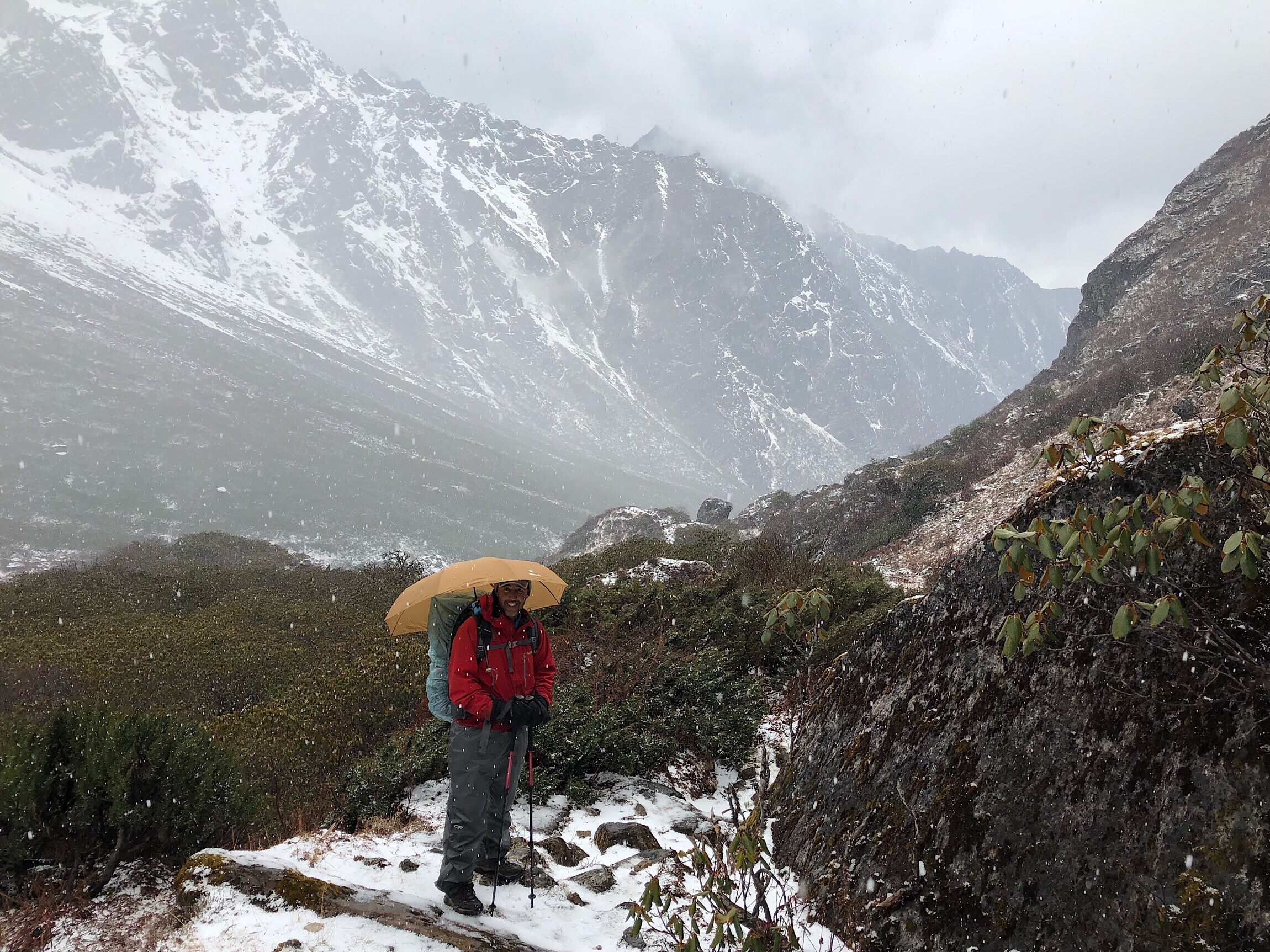 We got to camp at 4:30pm and got to pitch our tents for the first time this hike! The Tarptent Notch Li is new to both me and Buck-30. I was feeling horrible with rice seemingly burning up my chest as I tried to pitch. I’m not used to the layout of it, and had to completely take it down and start over when I misgauged where to stake out one side of doors around a rock. It was exhausting when I just wanted to lay down. The view is stellar though! Doesn’t look real! 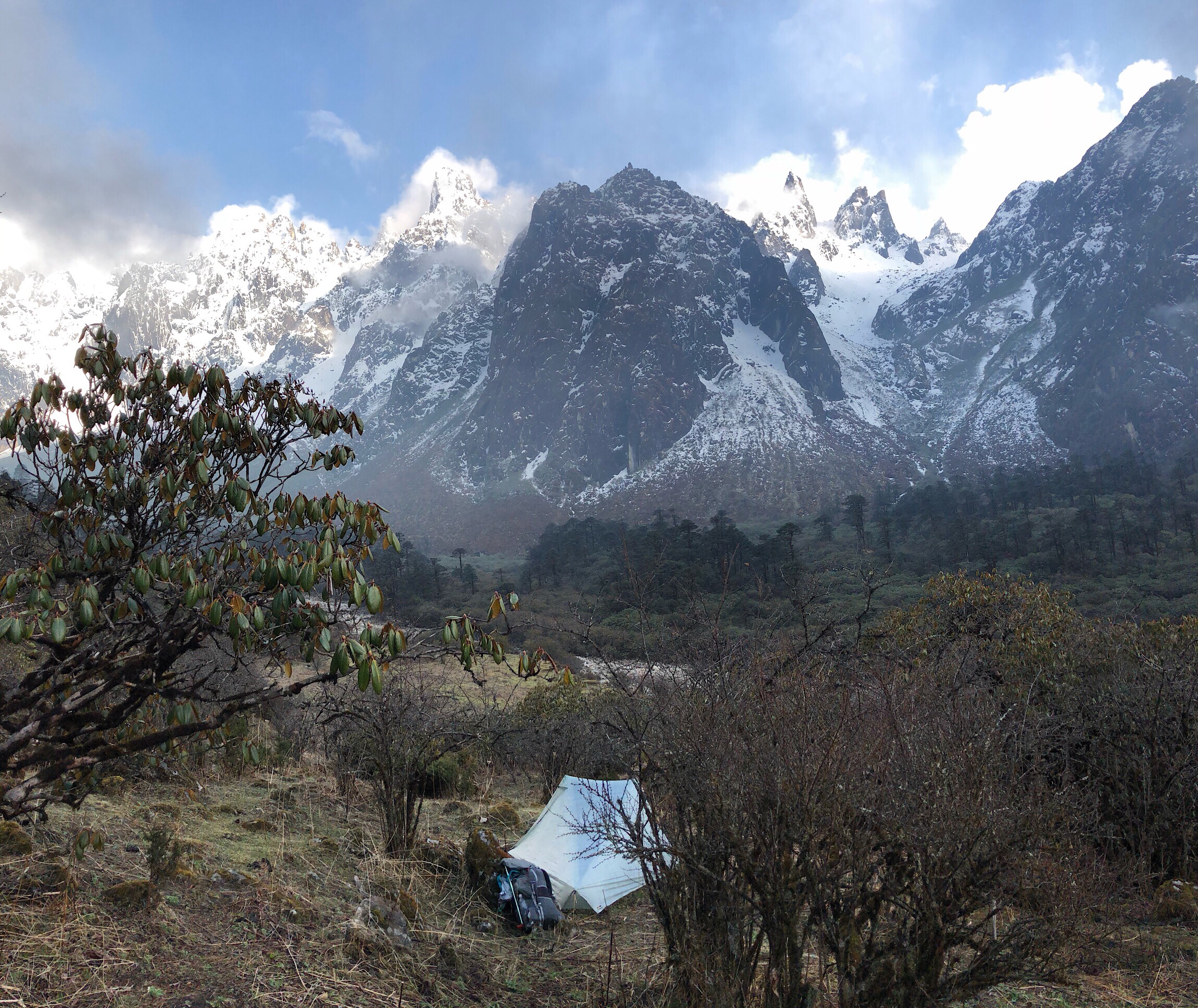 The combination of the exhaustion, heartburn, and being disoriented in the new tent had me unable to eat or feel relaxed at all. I did my best to try to calm my mind and body. The heartburn was so painful, but I hadn’t drank or eaten nearly enough. I couldn’t get anything down, so I just did my chores and a few notes for journaling. I was asleep by 7:30pm, with a headlamp still on my head, without even unpacking properly, or brushing my teeth. I just needed to crash.

I woke up at 10:45pm, nice and warm at 50F/10C in my tent, feeling much better. I got some food down, brushed my teeth, wrote this journal entry, and was back down around 12:15am. I love the white noise of the river we pitched above. We seem to have chosen well, far enough from the damp condensation of the river. Tomorrow should be a much less stressful day, and I can get back on track. That muscle above my knee better cooperate!