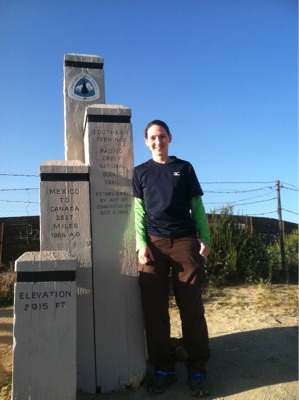 Today was one of the best days of my life! I want to do this entry justice without being too long winded. At 4:30am Michael and I got up and ready so that Helene (thank you for hosting us!) could take us to Scout and Frodo’s for the shuttle to Campo. We drove up to a culdasac full of cars and trucks and 30+ hikers were militantly being placed into vehicles for a 6am departure. I saw the crowd and a large PCT banner on their house and the reality of this hike finally hit me. It hit hard too! I managed to contain the tears as I rode 1hr 15min with five other thru hikers (Michael, Cricket, Matt, Kristen, and Ville). All great people with great stories.
As soon as we got out of the car and I saw the monument, the emotions were overwhelming. I don’t know if I’ve ever been so overcome with happiness and excitement. Michael and I stayed at the monument for 45min as the crowd moved on so we could really take it in. During that time, Alex from Portland also arrived and started his thru hike.

On April 29th, 2011 at 8:01am, I started hiking the PCT. It felt AMAZING! The whole way my legs felt fresh and my bag felt perfect. I had enough adrenaline to take on virtually anything. The only thing I can compare it to is the energy and excitement (and swell of tears) that I feel at the start of a marathon. I kept waiting for it to disappear and it didn’t.

Throughout the day, I played leapfrog with about 15 other people and they were all great. There is a strong bond that is already immediately felt among the hikers and many of them are also hiking solo. I’d hike 20min-1hr with someone and then hike solo for a bit. Then I’d stop at a stream and take a break with a group and maybe hike with some of them and so on and so on. Some of the hikers included Sister Sue and her daughters, Kylie(who I hope to hike more with), Rory(attempting to be the youngest solo hiker @18yrs), and Doug. I also really liked the gaps when I was able to hike alone.

I took my time on the hike. There was a great breeze and it was so much more beautiful than any of us expected. Panoramic views, changing terrain, little lizards scurrying everywhere, and surprises of amazing wildflowers. There was a big climb just before Lake Morena where we really earned our wings.

I came into Lake Morena just as they were serving the free burritos and Gatorade to thru hikers. It was like a reunion and more. I talked with Portlanders, those I’ve already met, and countless new people anxious to mingle. By the time the PCT short films were being shown at 8pm, I was ready to fall asleep. The physical and emotional journey of the day was so much that I was asleep by 9:30pm. Great first day!