I wanted to start today’s entry with something I failed to mention yesterday. I mentioned all the care packages I got, but I didn’t give credit to the person organizing all my boxes back home and making sure everything gets to me. I want to thank my stepmom Robin for all the time and effort it takes to get those boxes to me on the trail. It is a difficult job and knowing that all that is in her hands makes this trail so much easier for me. THANKS Robin:)

As for today, we tackled the much anticipated Mt. Baden Powell. Here it is as we hiked toward it. 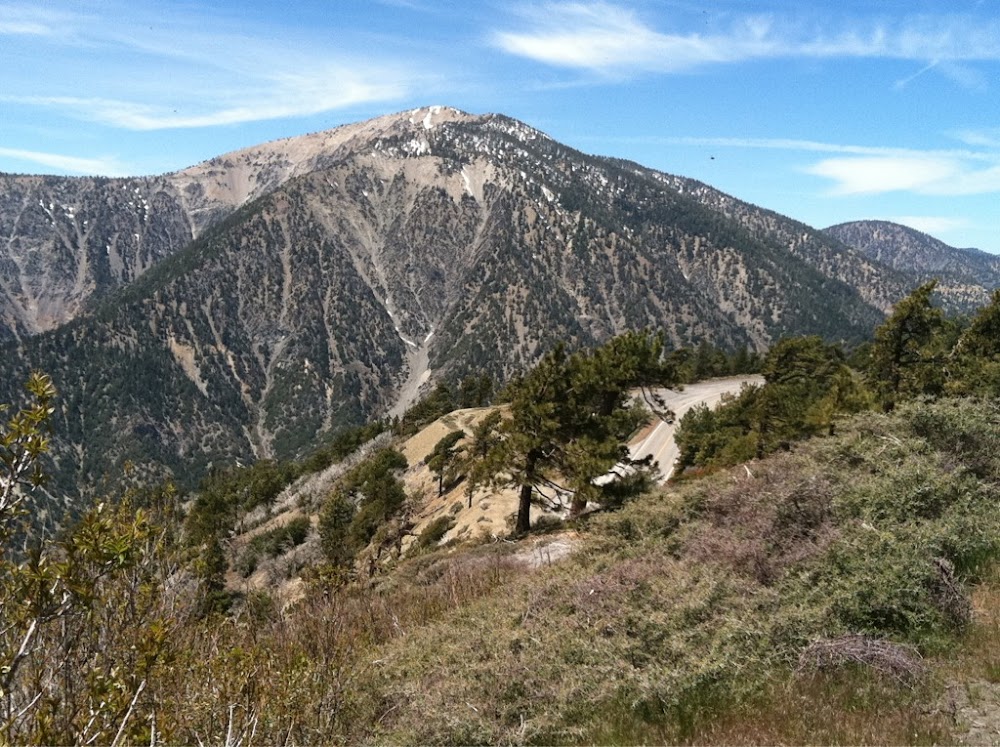 Before I get to that, let me give you some background on how our night went in Wrightwood. As I mentioned yesterday, I roomed with Top Shelf, Liz, and Skinny D at the trail angel, Courtney’s home. The six members of team No Babies also stayed there downstairs. We’ve been leap frogging with this group since day one, so we knew they tend to be a higher energy sociable group. They are all very nice, they just seem to require a lot less sleep than we do. Anyway, they ended up going out to the bar with our host and they all came back to the house around 1:30am with more locals and continued the fun well into the night. Needless to say, the four of us did not sleep much. I just gave in and watched some shows til 3am since I wasn’t going to sleep anyway. In the morning, we were all pretty slow to get going and by the time we were able to get a ride back to the trail, it was already almost noon and the four of us were pretty sluggish. Oh well, these things happen.

The four of us knew Mt Baden Powell was difficult elevation and that it still had a good deal of snow on it, so we knew it would take awhile. We were surprised at just how much snow there was though! 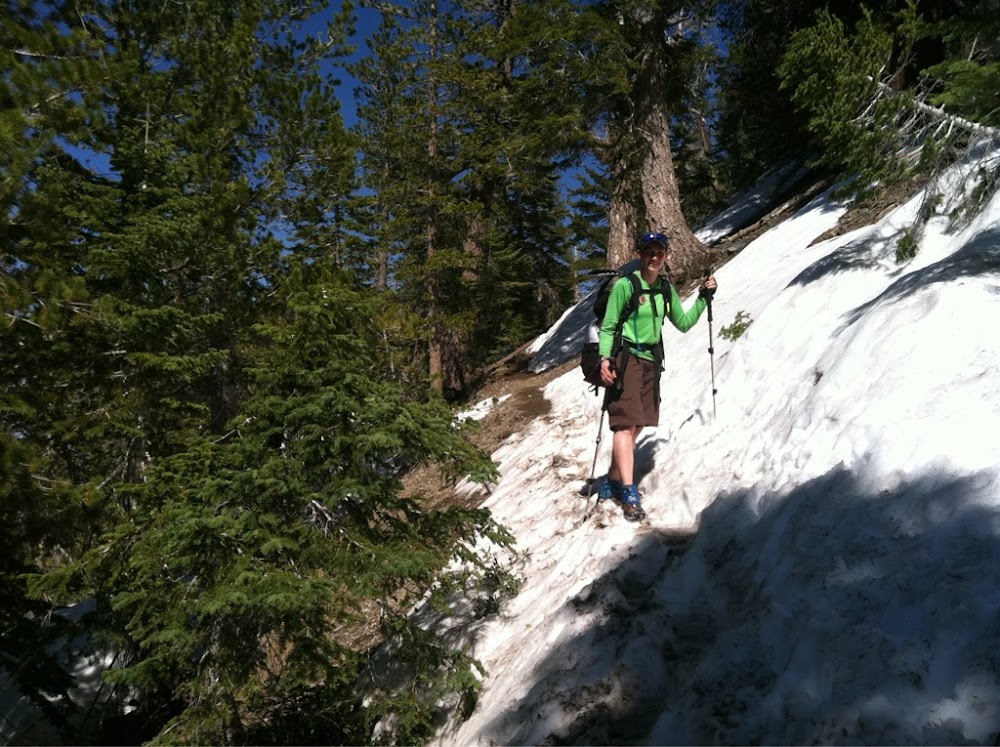 This is a popular hike, so we saw lots of day hikers out for the weekend and many were quite excited to meet thru hikers. It was fun to talk to everyone on the way up and it felt like we were mini celebrities. Soon after we started, we ran into Shepard, the awesome trail angel who gave us trail magic about 50mi ago the day we were headed to McDonalds. Small world! She was day hiking and it was fun to see her again and hike with her for the first part of the day.

It took much longer than we thought to get up on over Mt. Baden Powell and it was quite exhausting dealing with such high elevation and snow. At one point, there was so much snow that the switchbacks ceased to exist and the footprints just went straight up for a mile. 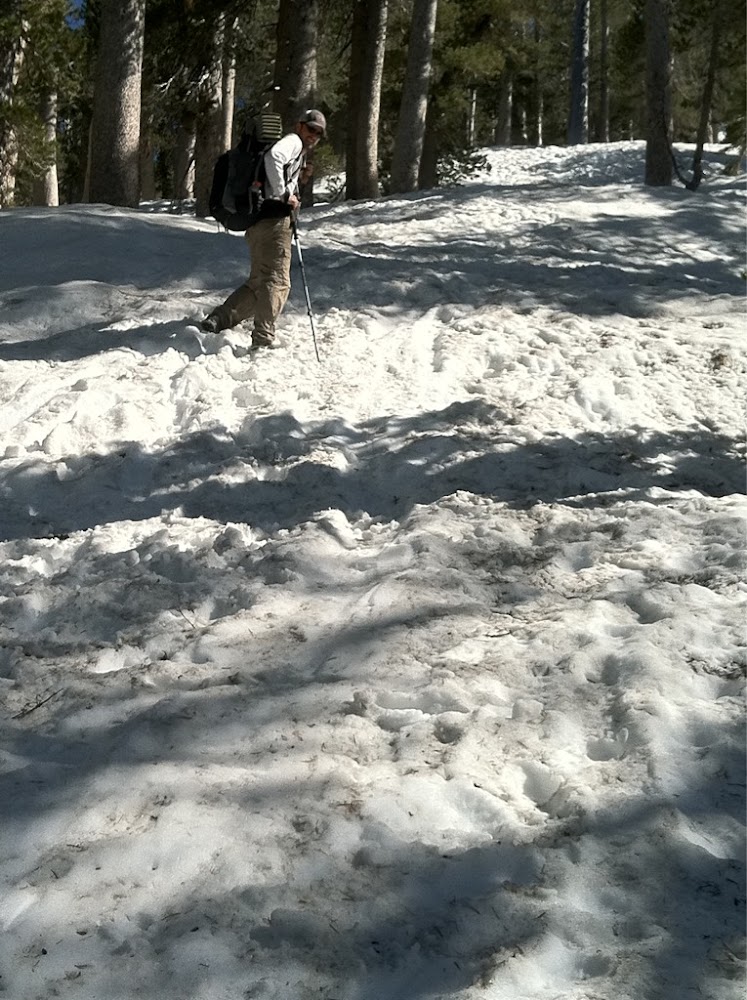 It took an hour just to go one mile. The true summit is just off the trail, so we went ahead and summited. It was fun to hike with Liz and Skinny D for the day. 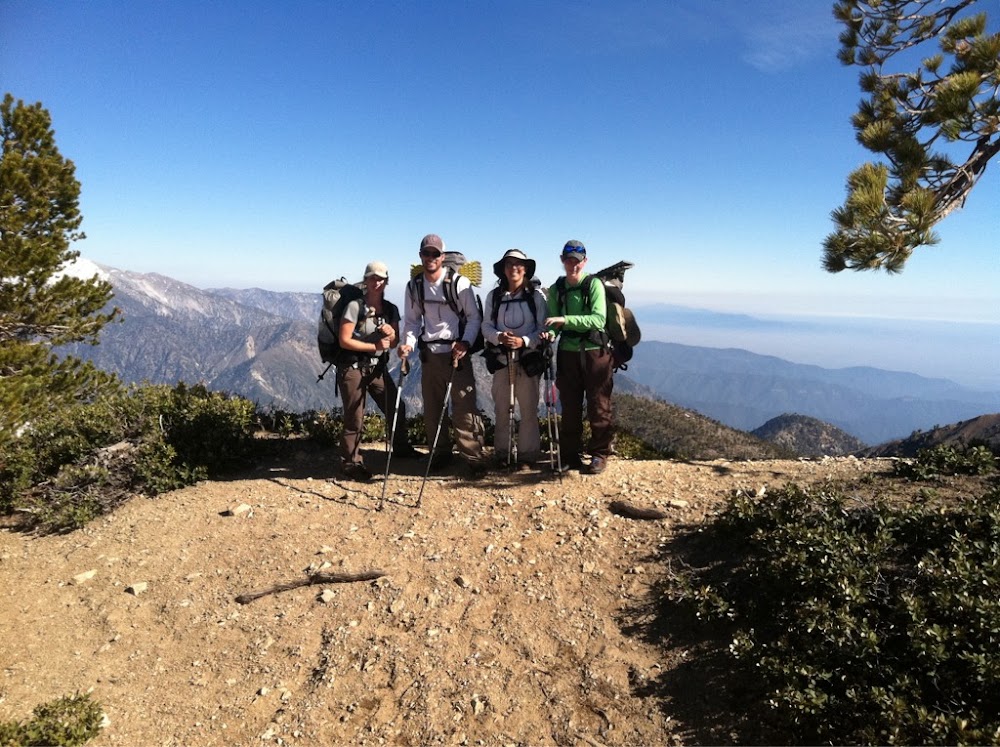 The trail conditions after the summit were just as bad. Lots of snow and route finding. At one point, Top Shelf and I were a good 1/4mi off trail and got turned around. I am so glad I have Halfmile’s maps on my iPhone with GPS. It always pinpoints us and shows us if we’re on trail. Great to have! We kept telling ourselves that this day is great training for what’s to come in the Sierra in less than a month. That is so close!

We got into camp much later than usual around 7:30pm and got a bit of shock when we saw that we were also camping with a lot of kids and families. They were all great and went to bed early, so that was nice. We were also happy to see a lot of the hikers there too. Some we thought we might never see again, but some chose not to stay in Wrightwood as long as we did, so we’re back with a lot of the hikers we really enjoy. There was Stumbling Goat, Thumper, Rattler, General Zad, Cow Bear, Punisher, Blister, and the Slingshot Sisters. It was quite the group and we wished we had gotten there earlier. With our lack of sleep last night and big summit today’s Top Shelf has agreed that we get to sleep in 30mins tomorrow. Yay!