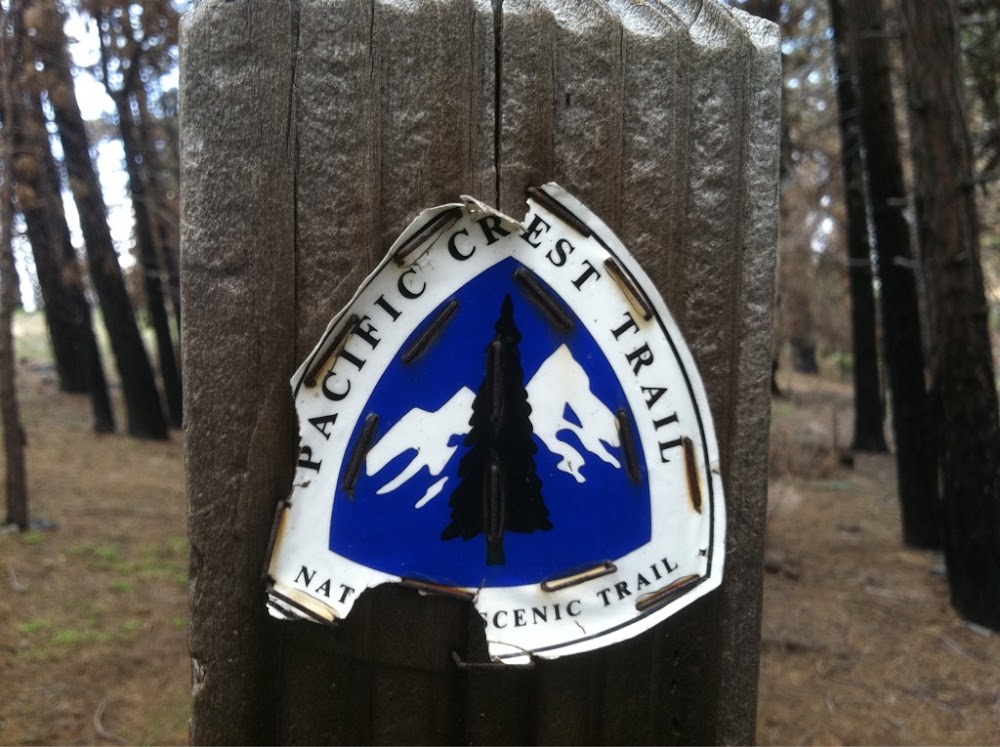 We kicked ass today! We got going by 6am and Blister had left about 30min before us. Just a mile or so down the trail we saw that General Zad, Alex, and Wiz were still camped. We had an easy 5mi dirt road walk with a great view this morning. 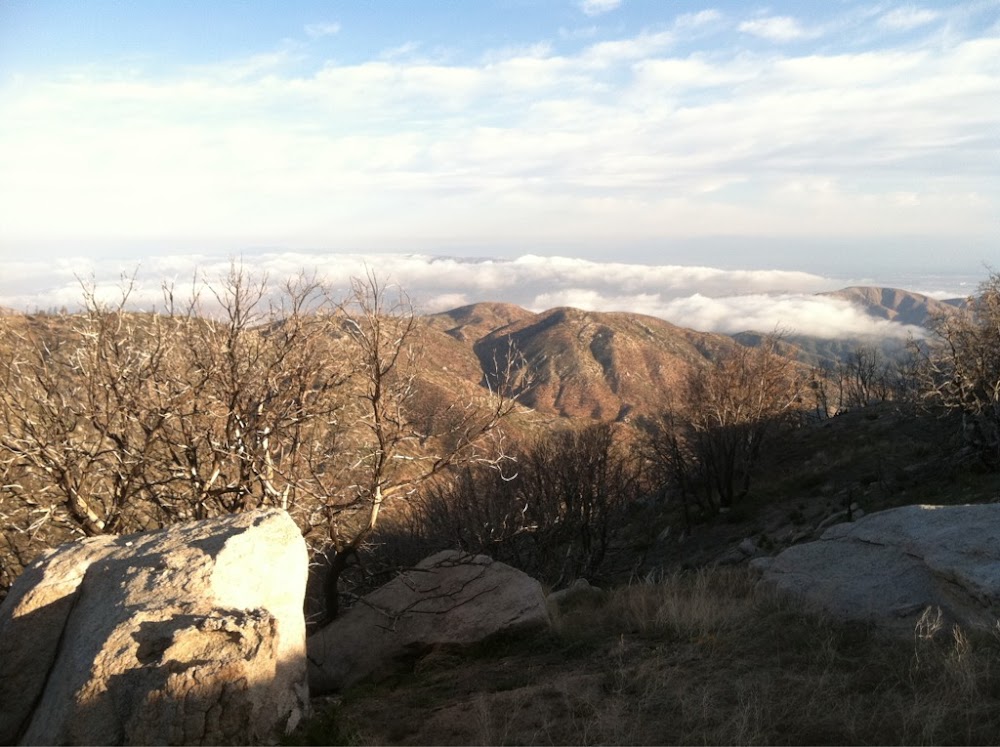 For some reason, we were moving fast. We just had a great rhythm going and were really churning out the miles. We hiked all day through the recently opened Station Fire area. It has been two years since the arson induced fire. The ranger told us it is the largest fire in S California history and it burned 250,000 acres.

It was okay terrain, but not easy. We had a 14mi gap of no water and filled up 7mi into the day. A couple miles after that, I stopped to make a SticPic video and Top Shelf went ahead. Then Alex walked up and asked what mile we were at because he was looking for the water source. He had gone right passed it without noticing so I offered him some out of my water bladder. He accidentally spilled half a liter and then I wasn’t able to give him much more. He decided to stay there and wait for Wiz who he was supposed to meet at the water source. After all that and my video, I knew Top Shelf was going to wonder where I went. I ran down the trail to catch up and less than a mile later, I came to a road. I was in a hurry and didn’t see the trail on the other side so I turned back and figured it was a switchback. I ran up the hill and saw Top Shelf laying down waiting for me. I immediately apologized and he turned around and it wasn’t Top Shelf…If was Alex! What!? In my hurried state, I had ran right back up the same trail I went down. Doih! Of course, then I was really behind and I really had to book it. I caught up a few miles later. Jeez!

On the trail, there were a lot of downed trees covered in soot that we had to go over and that got tiring for me. 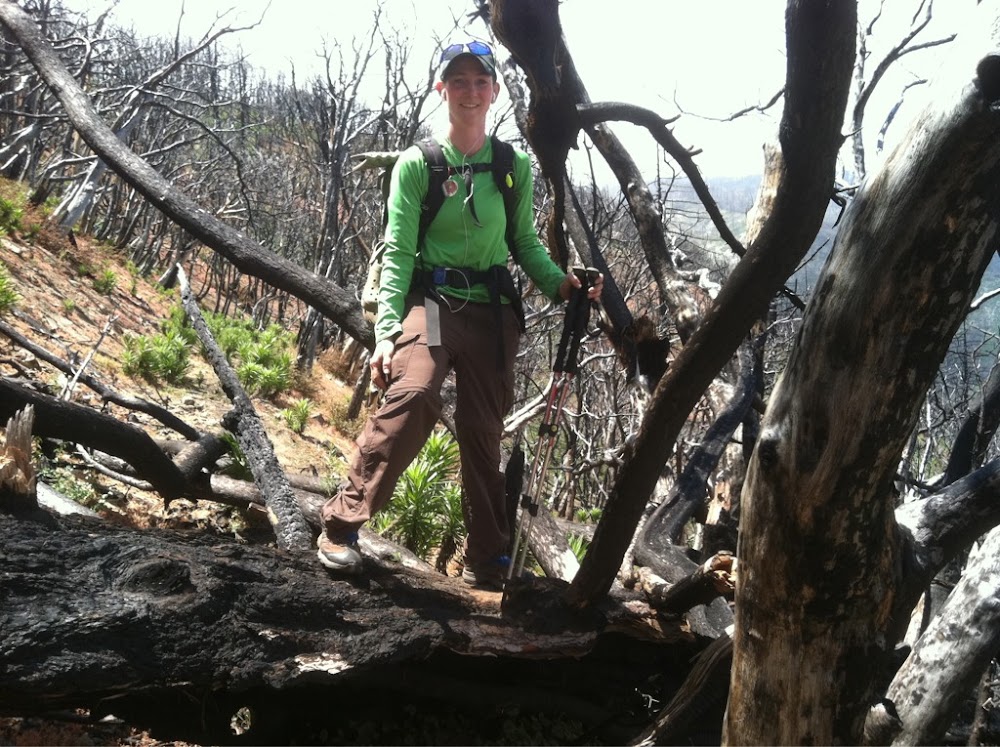 Top Shelf just seemed to get faster because of it. My theory is that it is because he was a hurdler in high school and he was just trying to sprint between the tree hurdles. Whatever the reason, we flew and did 18mi by 1pm. At that point, we saw Blister and had lunch and then Alex, Wiz, and General Zad joined us. We moved on and got to our final camping destination at 4:15pm. It was a good view on the way into camp too. 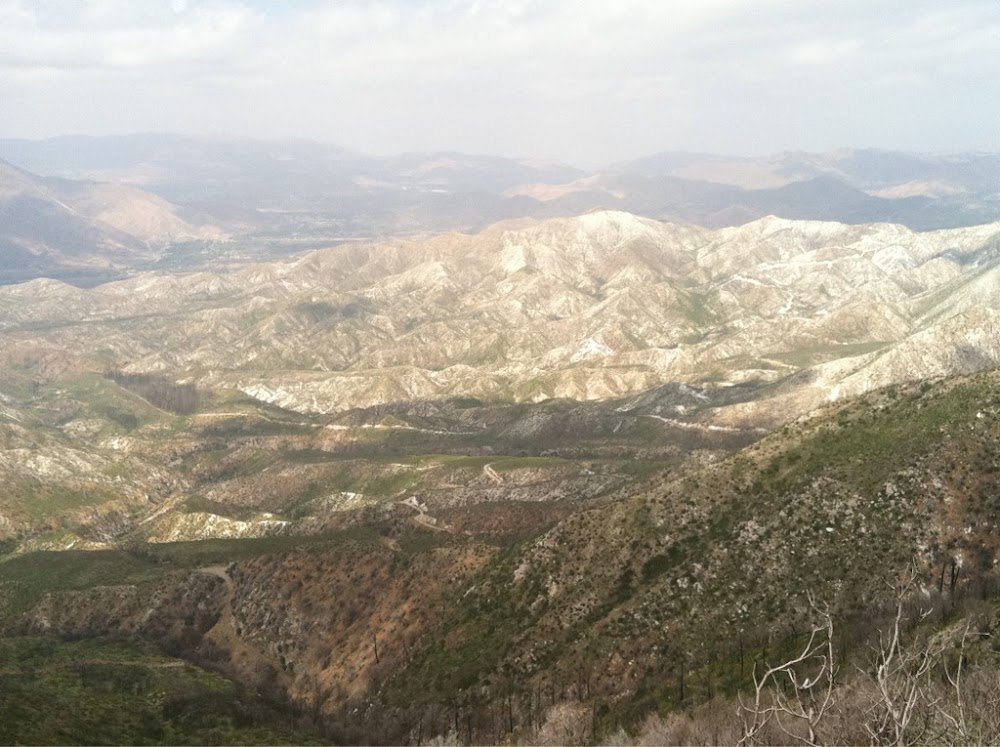 Top Shelf and I love getting done early and this is two days in a row. I have great reception for watching shows too. YAY!

As an end to today, I want to say how proud I am of myself. It hit me that I’m the only girl up at the front here right now. I don’t know if there are any girls ahead of me who started from kick-off. I only know of Annie and Kylie who stayed in Wrightwood an extra day and they will probably catch up in a couple days. I really rocked it out and kept pace with the five speedy guys around me today without feeling out of my comfort zone. That’s pretty cool! We are all tented in an old horse corral area and I couldn’t get them all out of their tents, but I did get them to all at least peek out for a picture. 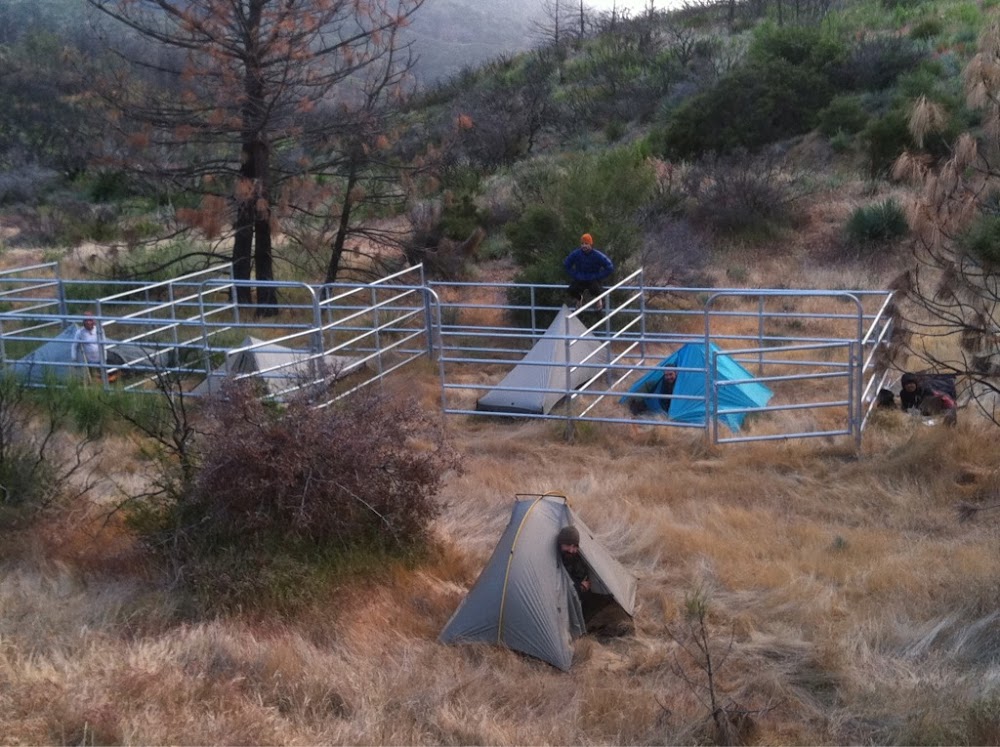