*Note: I haven’t been able to get a signal the past 24hrs to send out my posts, so multiple ones may get sent out if there is a day or two missed. This will happen from time to time. I still have my Spot that shows my location if anyone is concerned.

Today was a really rough day for me. Last night, I woke up at 11pm feeling like the world was spinning and I got sick. Blech! I have been nauseous the past three days and I assumed it was from my monthly cramps which usually knocks me out pretty good. Now I’m thinking it was a bit of altitude sickness too. Either way, I didn’t sleep much and started hiking on an empty stomach because it was still acting up in the morning.

To add to my lack of sleep and discomfort, the HEAT was back! We were headed back down into the desert and the morning hike was downhill for 11mi and we lost almost 5000ft in elevation to bring us to our lowest point on the trail so far at 1200ft. Top Shelf and I were not enjoying it. We could clearly see our destination the whole morning on these long winding switchbacks. 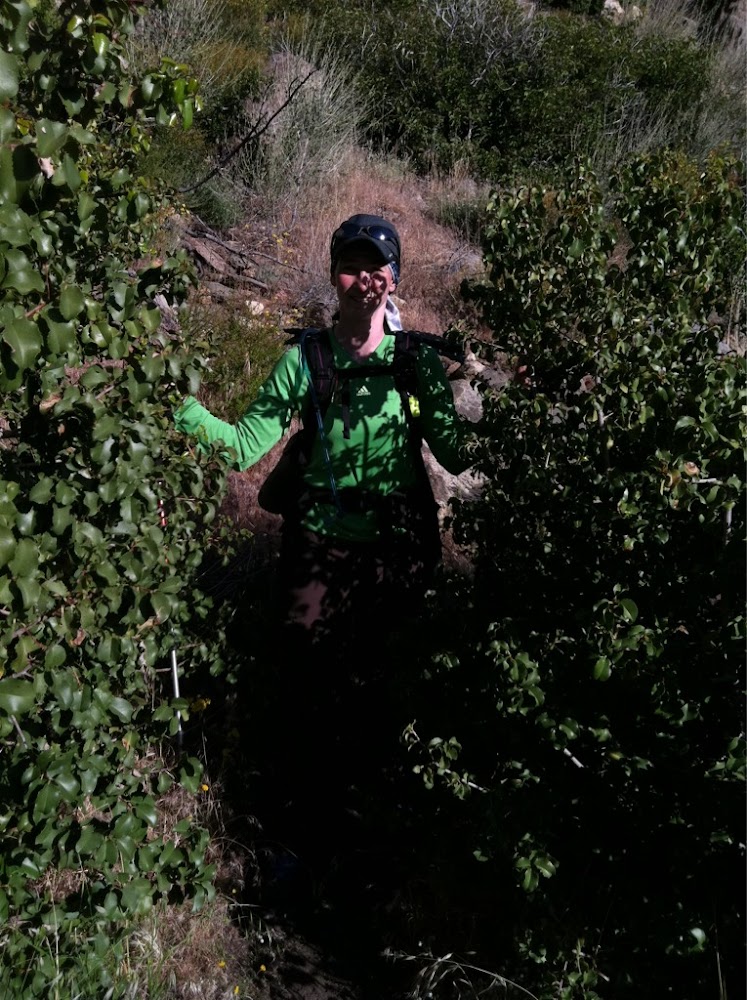 The trail was loose, sandy, and at an angle, so it took a lot of energy to stay balanced. To add to the fun a lot of the trail had dense shrubbery that we had to force our way through constantly getting poked or tripped. With the way I was feeling, being hot and constantly annoyed with bushes was really pissing me off. 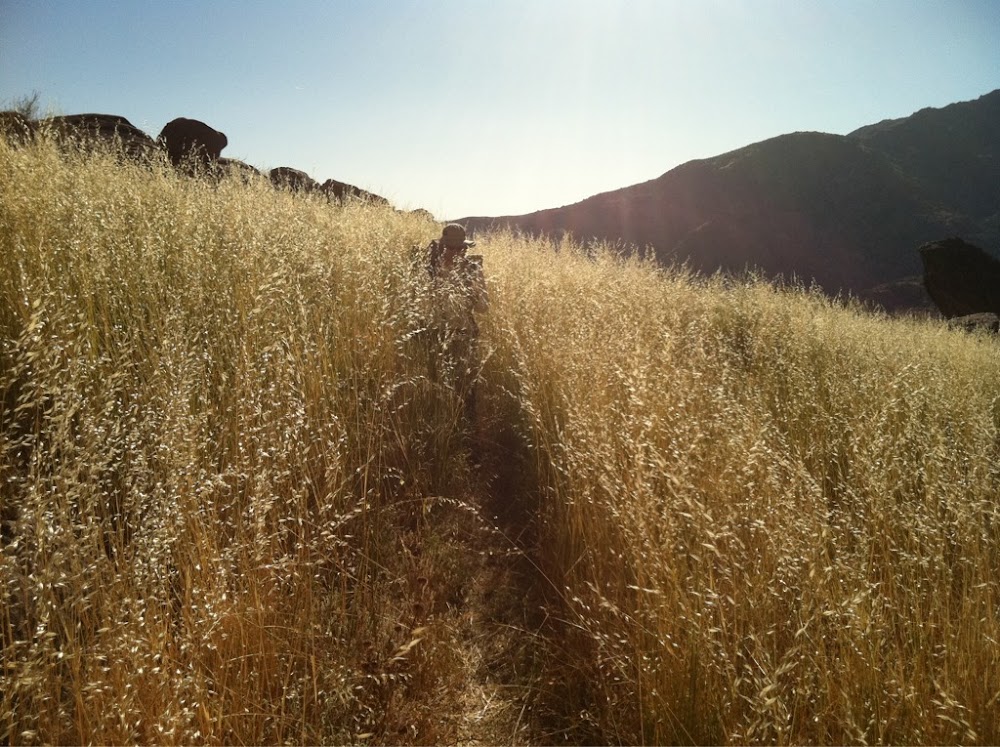 We finally got to the water fountain at the bottom and I soaked my head in water. It wasn’t even 10am yet and we had done 10mi and felt really drained. We hung out at the fountain for a bit and met 3C who has survived 3 different cancers and is hiking to raise money for cancer. You should look him up if you’d like to donate. His site is lung ancerhike.org. He also told us that yesterday one of the stronger hikers we know was airlifted off this part of the trail because she had food poisoning and dehydration. Then another hiker came down and when we commented on the long swichbacks, he said he just cut through some of them. Urgh!

We started the 4mi walk across the desert to the overpass of I-10. Some day hikers offered us a ride to a nearby gas station to take a break from the heat and we gladly took it. Thanks Rich and Scott! We spent 2.5hrs at the gas station eating ice cream products ana drinking Gatorade. I started to feel a bit better and tried to eat more. We got a hitch back to the trail after 30min of trying from an odd guy who had earlier won $100 on a lottery game and gave us each $5. First time either of had ever made money on a hitch before!

We got back to the trail by 2pm with the plan to get 12 more miles in so we could end at the Whitewater Reserve where the campground had running water, picnic tables, and toilets. A hiker’s dream! We set little goals to get through the heat. In 3mi was the overpass and trail magic so we could enjoy a cool drink in the shade and some snacks. 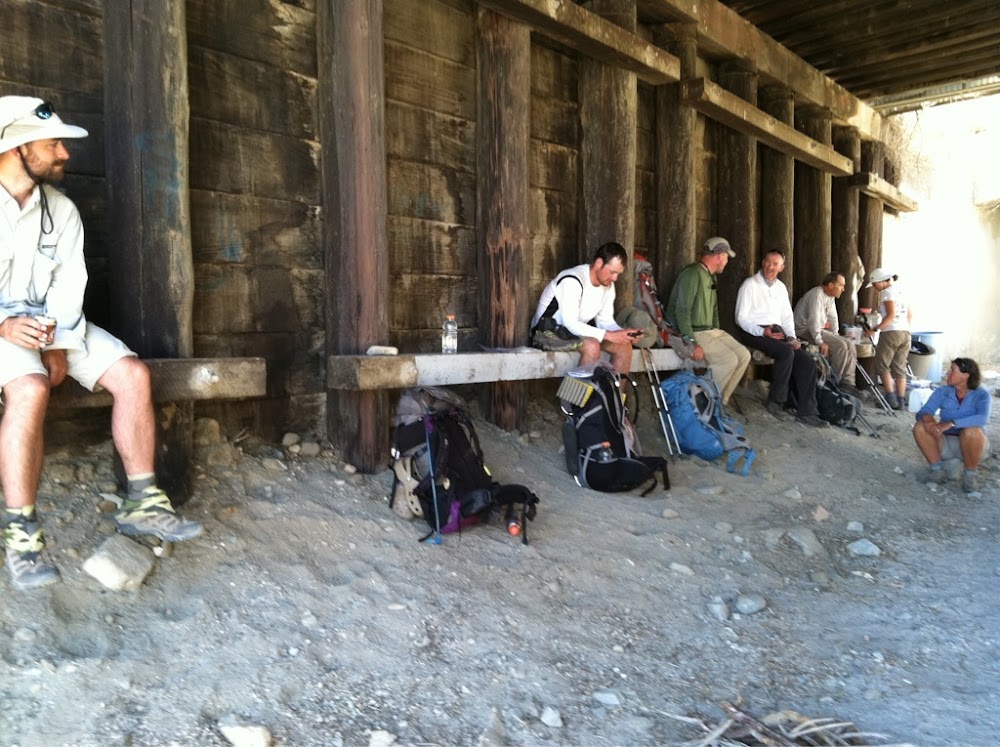 In 4 more miles was a water source with shade for a brief break. In 5 more miles was the campground. I kept my headphones on and my head down for a lot of it. After the highway, there was A LOT of steep uphill. We were both pretty exhausted by it with the heat. We were approaching the wind farm with the big windmills and there was no wind today. There is usually 30-50mph gusts. We were hoping for at least a breeze and it came after 5pm when it started to cool.

After lots of up and then some miles of steep down again, we finally got to the junction for the campground. We were discussing what our strategy would be because we were both really tired and hungry. Whether or not to set up tents or just to go straight to making dinner. I was so tired I didn’t want to make dinner. Then the most AWESOME thing happened! At the junction, there was a note on the trail saying there was trail magic and all the food we could want including burgers and hot dogs. Again, I wanted to cry. This damn trail is such a rollercoaster!

When we walked up, we saw the group I had lost a few days ago! It was Alex, Kylie, Annie, Whiz, Bloodbath, and Speed Bump(Jr). It turns out that they were with the hiker who had been airlifted off the mountain yesterday and then they came upon this trail magic at the campground today and decided to just stay for the day. I was able to eat a burger, hot dog, and Oreos! I feel much better now and we decided to sleep in tomorrow.