Last night, we had camped off trail a bit and left a note for Wandering Dot in case she made it as far as we did. We woke up this morning and walked back up to the trail to find that Dot was camped 10 yards before our note and never saw it. Funny coincidence! She was getting up as we left and told her we might see her down the trail.

Within 20mins of starting this morning, we got rained on. It wasn’t too bad, but lasted for about an hour and I needed all my rain gear. 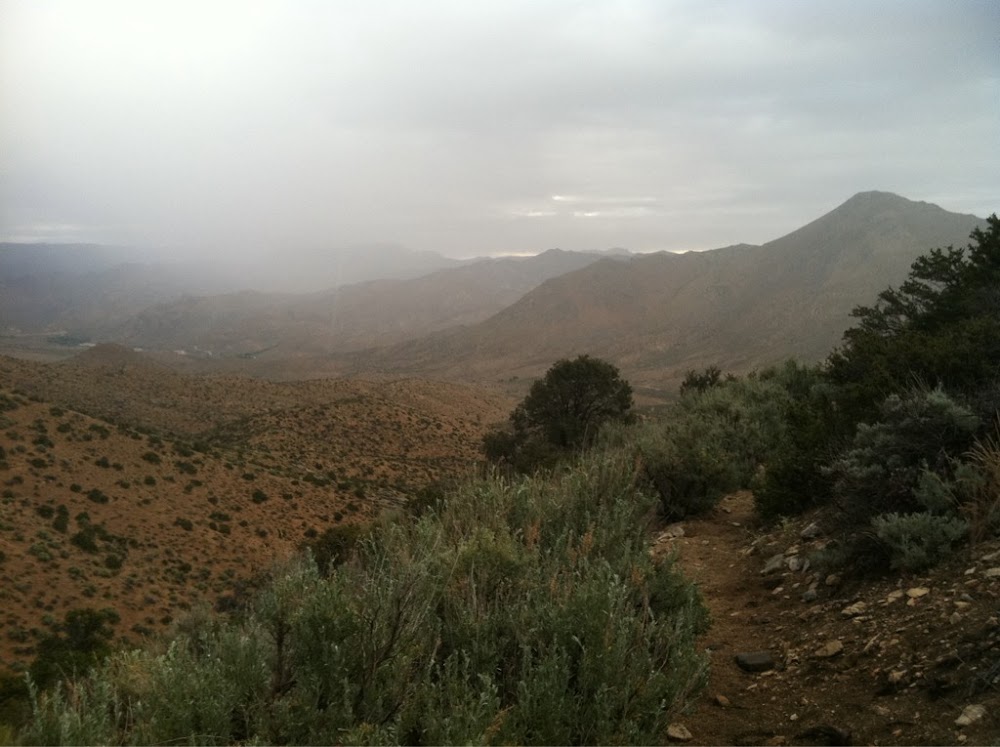 We headed to a cache that was 5mi away and it stopped raining by the time we got there. We met two new hikers today, Turbo and Furious. Both great soft spoken guys who we leapfrogged with all day and are currently camped with. At the cache, there wasn’t a ton of water, so we took what we needed to make it to the next cache 13mi away. Both of these caches are maintained by a woman named Mary and without these water supplies hikers would have to hike to springs well off the trail to find water. As we hiked, the clouds broke up and the views were great all day. I think this will be our last desert section until after the Sierras. 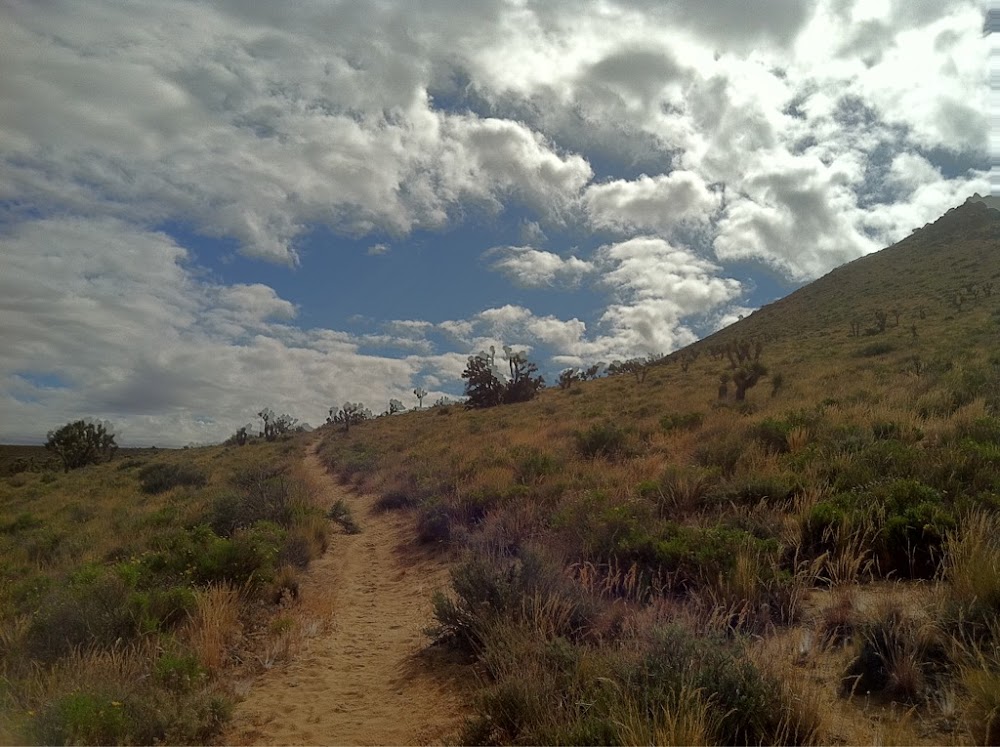 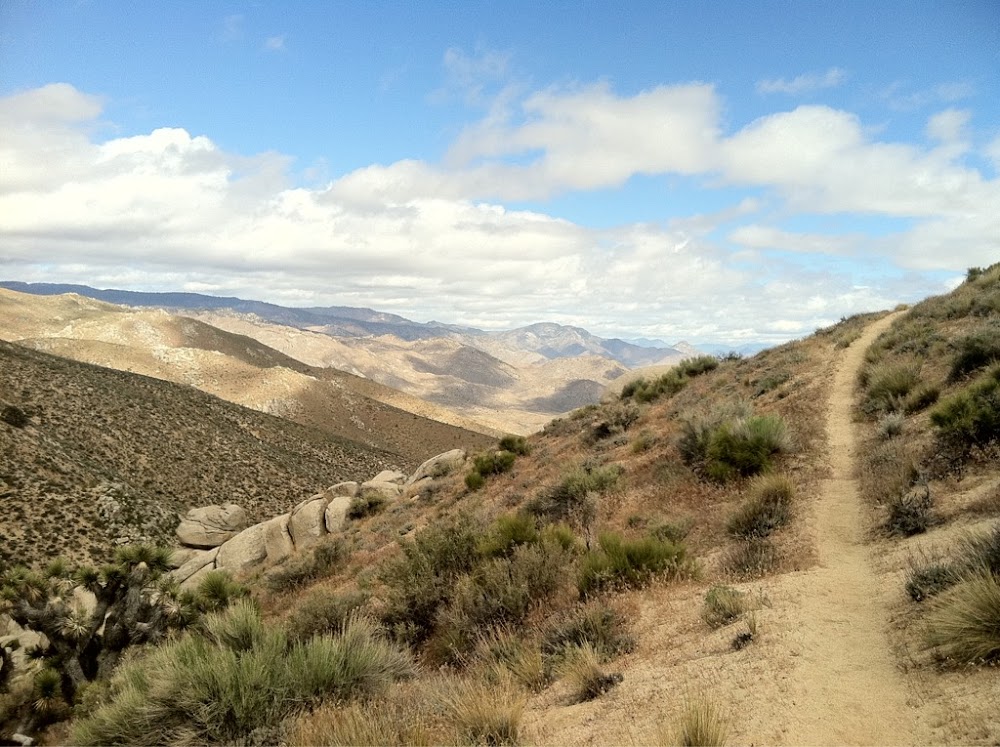 We were making great time and ran into 3C a couple hours later. I mentioned before that he is raising money for cancer (which he has beaten 3 times) and the last time we saw him was 24 days ago after San Jacinto. He was hiking with M&M and they had decided to jump up to Walker Pass(where we are going tomorrow) and hike southbound. They will also jump up to N California like some other hikers and hike south to hopefully give more time for the snow to melt before going into the Sierras. They told us that the cache we were headed to was empty and that was bad news. That meant that we needed to really conserve what little we had and then hike and additional couple hours uphill before getting to a spring we’d have walk off trail to vet to. We hiked on hoping that Mary might stock it today because it is usually well stocked. It’s amazing how thirsty you become when you know you have to ration the small amount of water you have.

We got to the cache to find it waterless and Special Delivery was there taking a nap in the shade. We last saw him at Hikertown. He had been there well over an hour napping on hopes that Mary might come to restock the cache. We had quite a climb ahead of us and I was bummed to know my pre climb snack would only include a couple gulps of water. Turbo joined us in disappointment. Within 10min of sitting down, we heard a truck coming up the road. We all held our breath as we saw it was a truck. That’s when I saw the most beautiful site I’d seen all day…Mary! We were all sooo happy! She had 60gal of cold water and we happily helped her load it over to the cache. We talked with her and found out she’s been stocking this cache from her well at home for 12yrs. Amazing! THANK YOU Mary!!! 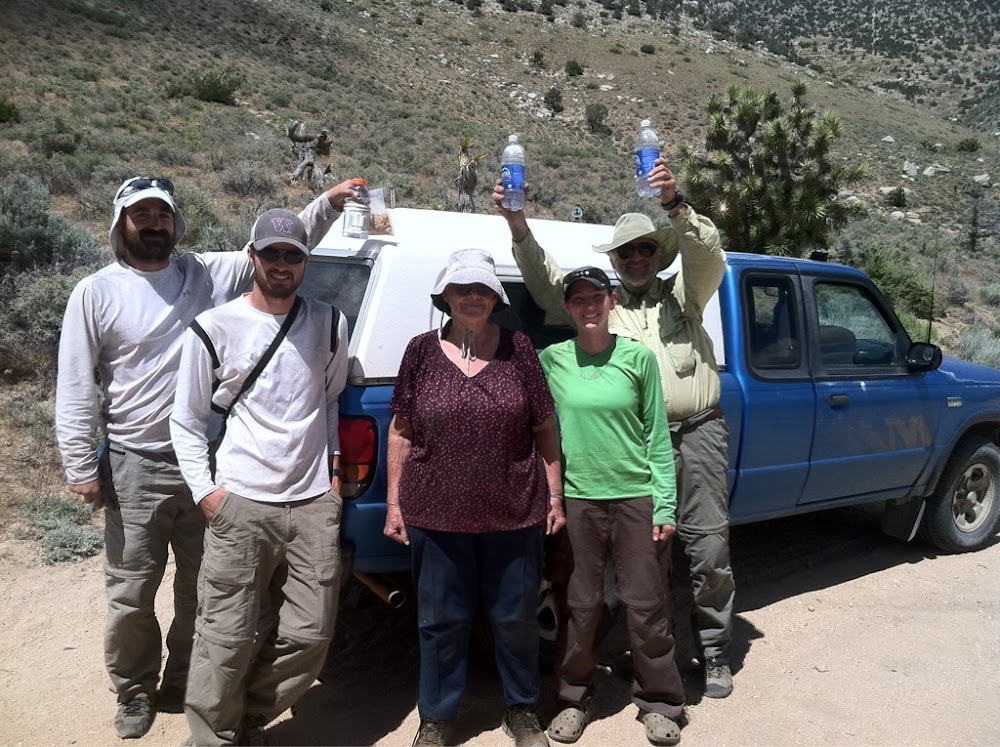 We loaded up and for the third night in a row had to end the day with an uphill climb carrying 8lbs of water since we wouldn’t be camping near water. This hill was pretty steep and had us going uphill pretty steep for over an hour. Blister got a head start on us and there was a trail register at the bottom of the hill. He wrote in it, “Blister is the RABBIT!” That is the term we use for hikers we see ahead of us that we try to catch. That was just the motivation Top Shelf and I needed and I think that is the fastest I’ve gone up a hill of this size so far. We barely didn’t catch Blister and he beat us to the top. It was fun for all of us because I got to see the chase with all the switchbacks above me and it was an entertaining race. We were so close! Once we got to the top, we were pretty hyped and we got our first view of the Sierras barely in the distance. That got us way too excited and the three of us noticed we were 7mi from doing a 30mi day and we decided to got for it…downhill with 8 extra pounds of water in our packs…An hour later reality set in and we decided not to push it. We also saw a ton of cows! Right on the trail! We had seen their droppings all day and they just decided to pop out of the woods and walk on the trail with us for a bit. I even got a video I’ll post later.

We found a spot to camp and Turbo and Furious joined us. Wandering Dot didn’t make it and is probably camped a few miles back. We are only 15mi from the road to Onyx(Walker Pass) and Top Shelf and I are looking forward to going there for the afternoon tomorrow and going to the convenient mart for some food:)