Day 48: A Crash Course in Mountaineering 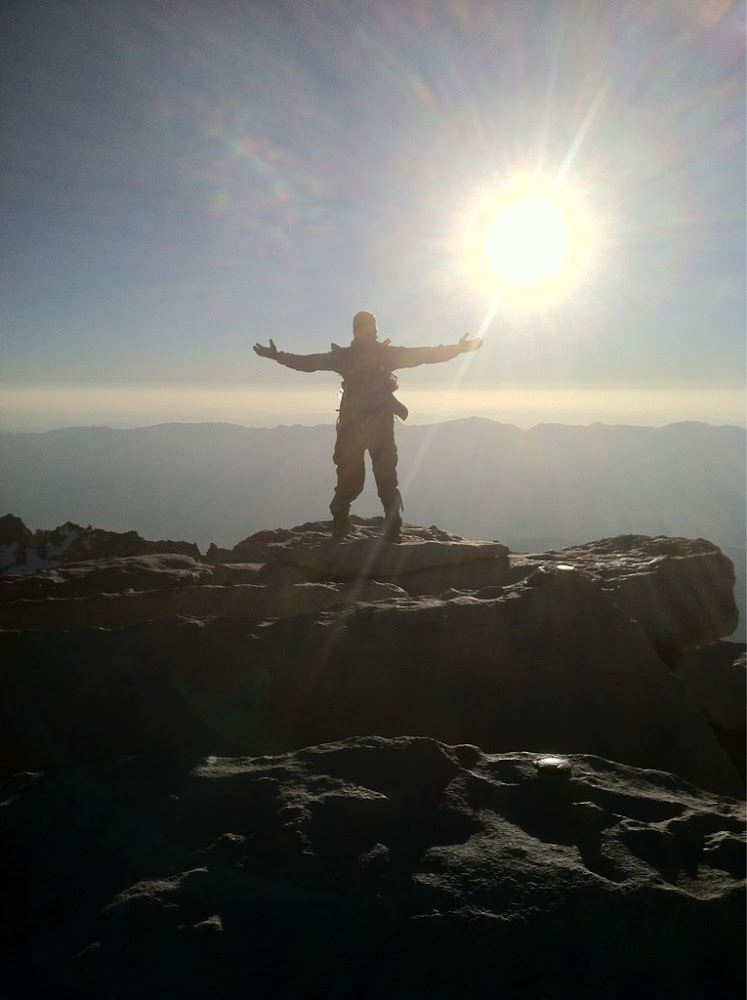 Today was Mt. Whitney day! It is a side trip that most PCTers can’t pass up. Mt. Whitney is 14,495ft high and is the highest mountain in the contiguous U.S. Our plan was to do a sunrise summit. With the snow levels this year, that meant we’d need to start around midnight. Keep in mind that we are coming off a very tiring day yesterday and only slept less than 3hrs last night. I drank a ton of water before I went to bed last night so that the need to pee would get me out of my tent when the alarm went off. Mission accomplished! We got going at 12:30am and put on our freezing cold shoes and socks from the fords yesterday. We got to keep our tents pitched at the campsite and it was great to have the weight of a day hiking backpack for the summit! It was a perfect night. In the 40s with no wind, clear skies, and the night before a full moon. For some of the trail, I didn’t even need my headlamp. Walking in the open Sierras at night with the moonlight was so great! Totally worth the lack of sleep.

We had our trail hounds Top Shelf and Blister in the front. We got hung up in a couple spots trying to find the trail and that took some time. I was amazed at the skill these guys have at finding a trail in the dark that many can’t even stay on in daylight. We had gotten some great tips from other hikers we saw that had returned yesterday and that was really helpful. The approach to Whitney took a couple hours and was pretty cool. We walked down by frozen lakes in big snow covered valleys and had mountains all around us. Much of the switchbacks up Whitney are covered in snow, so we got as high as we could and then had to do a combination of steep rock scrambles and using our ice axes and microspikes on the snow. It was stuff none of us had ever done before and was some serious mountaineering! A hiker who had gone up yesterday described the rock scramble as a class four rock scramble. That made all of us worry, but what I’ve found out here is that you will be surprised at what I can do and that it helps if I just take on each challenge as it comes. We all became quite comfortable with our ice axes very quickly.

In short, we had forested route finding, open snow fields with mountains around, switchbacks combined with rock scrambles and steep snow ascents, sharp rocky cliffside switchbacks, another steep snow ascent at the top, and finally some switchbacks to the summit. I was really feeling the altitude and lack of sleep in the last hour or so and took it slow. It took me 6hrs to summit and the guys were 20mins-an hour faster. I was too cold to spend much time at the summit, but I did get a picture. Yay!

Also, the views were amazing and surreal. Both these pictures were taken within the same minute. On one side of the mountain the moon was going down and it was still dark. On the other side, the sun was rising and everything was lit up. 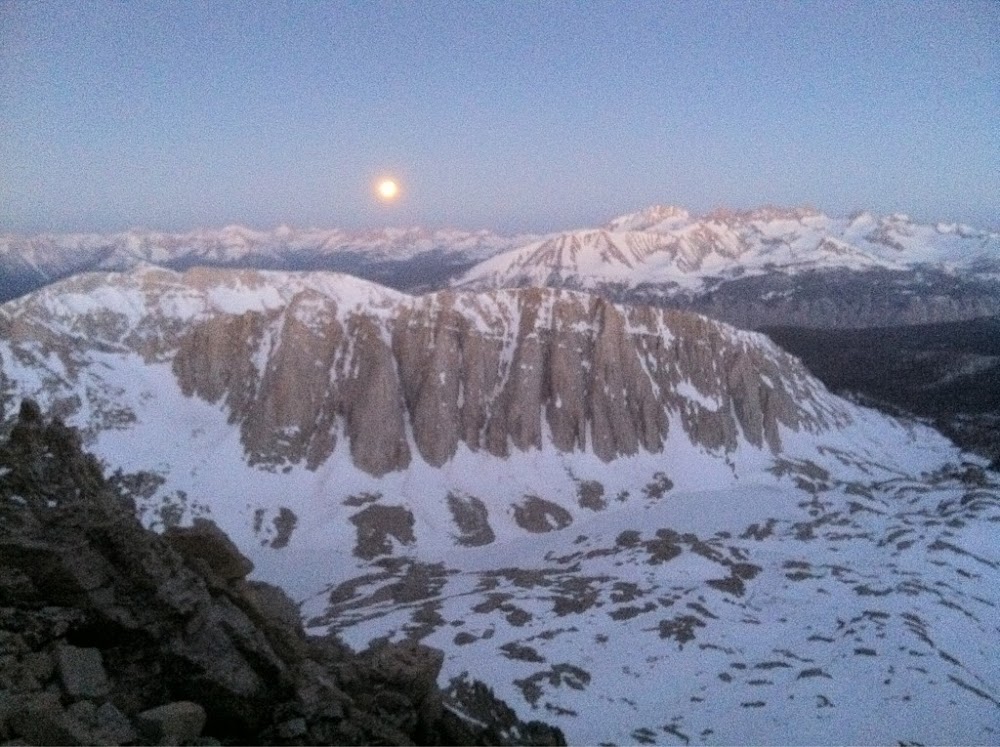 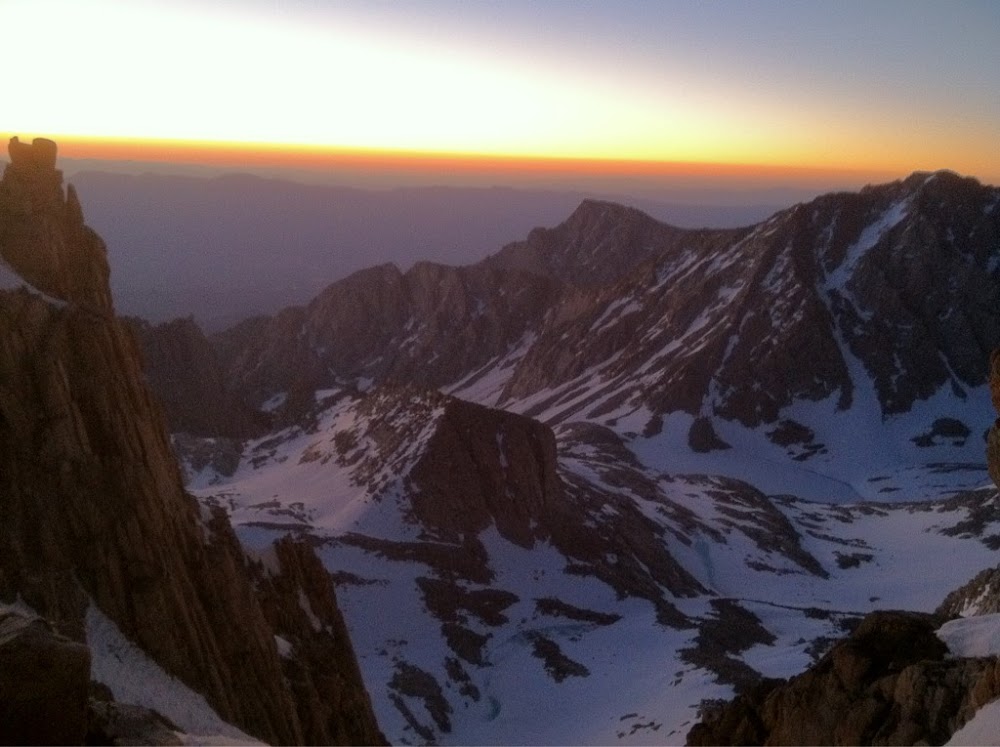 The descent was when we all started to feel the exhaustion. When I stood still, my calves were twitching uncontrollably. We did have some fun and played around with glissading/sliding down on less steep hills. We all got comfortable with self arresting too. That’s when you lose footing and start to slide down the slope and you use your ice axe to anchor into the snow and stop sliding. On the way down a steep snowy slope, we chose to use ice axes and crampons to inch down backwards because it was too scary to glissade. I lost my footing at one point and had a full self arrest to where I was laid out on my stomach and the only thing keeping me from sliding down was the ice axe I was holding on to that was dug into the snow. Whew!

We saw some thru hikers coming up as we went down. Later, we found out some(including Liz, Skinny D, Funyon, and Meow Meow) didn’t make it to the summit. A hiker named Garby was trying to glissade/slide down and hit a rock under the snow. He walked by our camp this evening and his knees were torn up and really bloody. Pine is camped with us and will summit tomorrow. As he sat here this afternoon, he saw the hikers and heard the horror stories of the majority who didn’t make it to the summit. He got more worried with each passing hiker and story and is getting an early start tomorrow to hopefully summit. He is also concerned because he doesn’t have sunglasses and the snow is blinding. I’m so glad we lucked out! This morning, we saw two other hikers (Headbanger and Happy Whale) far below us who were attempting to also summit. They ended up scrambling up the wrong section and one of them was too uncomfortable with the heights and elements and didn’t summit. That could have easily happened to us! I don’t want to give the impression that Mt. Whitney is always like this. It’s just that it is still early in the season and there is a ton of snow this year.

Here is the video of our journey! I finally got the video uploaded with a lot of help from Blister. I swear, getting this thing to upload was harder than the actual climb!

We got back to camp at 11am, so we basically hiked 10hrs off of very little sleep. We spent the rest of the day lounging at camp and making up for lost sleep. 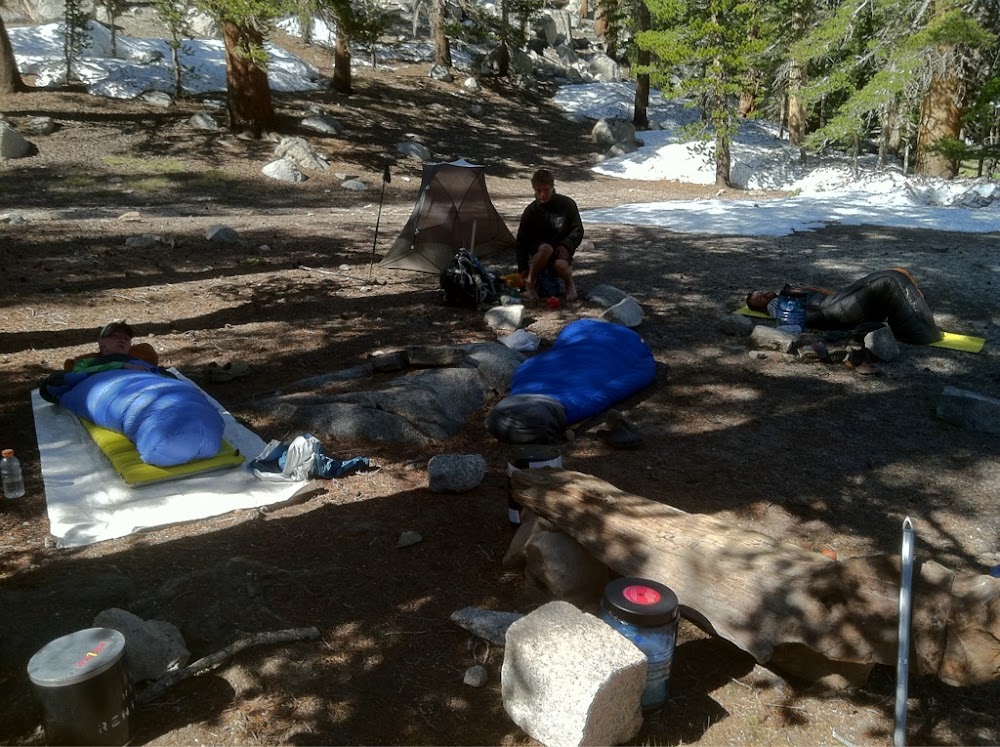 It was a great way to spend the day and we go to talk to other hikers as they passed throughout the day. Pine said it freaked him out, because he’s never seen all of us look so worn out…so worth it though! It is still crazy to think I’m in the Sierras and doing this crazy stuff! We all can’t believe we’re here! It still blows my mind that I can be out here for 7 days and carry all that I need to survive while also doing intense stuff everyday.