Today we did two passes and had completely different experiences with each one. The day was so long it felt like two days! A group of us decided to attack Forester Pass before sunrise so that we would be on frozen snow and avoid the slow slog of postholing in the daylight. The plan was to leave at 3:30am and my job was to wake up Headbanger and Happy Whale at 2:30am so that we’d leave on time. Despite my efforts, Happy Whale was not ready until 4am and the rest of us (me, Top Shelf, Blister, Speedbumb, and Pine) waited patiently in the dark as we jumped or jogged in place in cold wet shoes in below freezing temps. Not a great start, but as you can see in the video, going over Forester in the early morning was AMAZING! I can’t believe I’m doing this stuff!

Coming down Forester was pretty cool. We were with Speedbump and Pine. Speedbump is a bit of a daredevil and decided to try glissading down part of Forester. Blister was feeling the elevation and wanted to get down to a lower elevation and take a break when we found sun. Speedbump didn’t meet us down there and Pine said he saw him taking a break up above. We figured he was waiting for the group behind us because they also like to glissade…later we found out Speedbump had hurt his ankle and set up camp early to rest it. So after coming off the morning high of Forester, we descended into an Alpine Forest. As the sun came up, the heat came with it. We reached an area with a lot of sun cups. For some reason or another, the snow melts unevenly and forms cups and that makes walking on it more difficult. 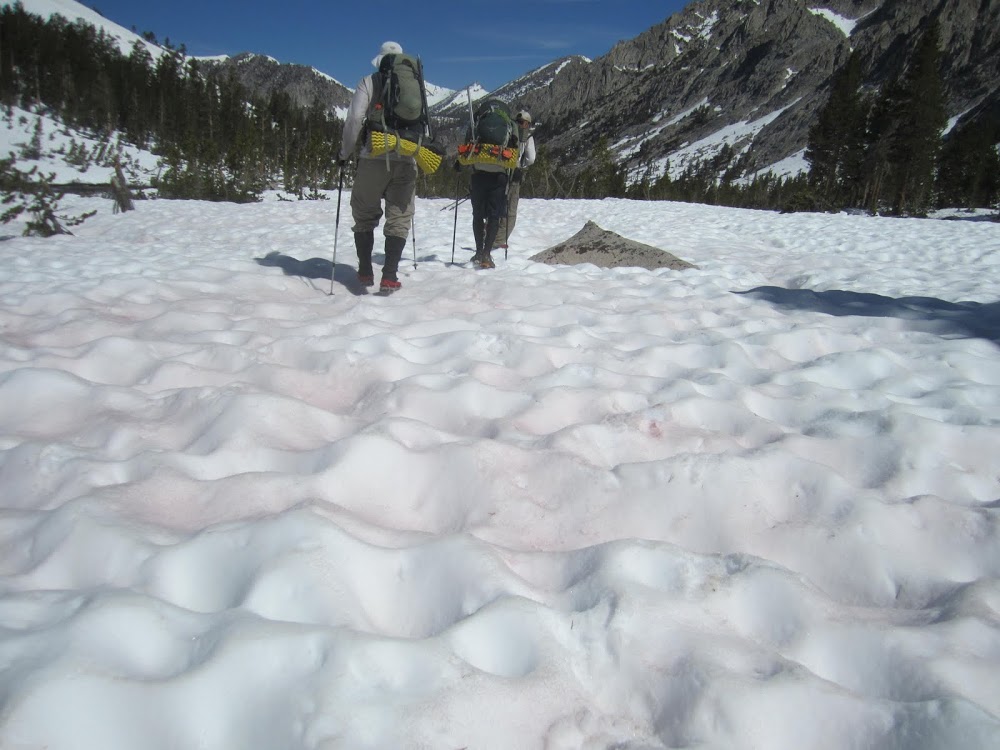 As the afternoon came, we headed toward Kearsarge Pass, which we needed to get over to get to the side trail to Independence. Keep in mind that this was our sixth day out with pretty long days back to back. The adrenaline of Forester wore off and my body was drained. We caught up with Thumper and Stumbling Goat and Stumbling Goat had also hurt her ankle (which she had had surgery on) in a creek crossing. She was gutting it out and they were pushing to get to town because of her ankle and they were running low on food. I questioned the push to get over Kearsarge with how long it might take in the afternoon and the elevation, but the guys wanted to move on. Argh!

We had trouble finding the trail which was completely buried and Pine and I got really exhausted with walking through deep and slippery snow in the afternoon. We had been hiking for over 10hrs, and honestly, I was pissed and ready to stop for the day, but there was no dry ground to camp. Around 3pm, we took a break at the only patch of dry land we’d seen in hours…it wasn’t ideal for camping, but I was willing to take it. I was outvoted and the guys wanted to at least go two more miles to get over the pass. I was worried it would be another few hours before we found a dry spot to camp. Thumper and Stumbling Goat arrived having cut straight through toward the pass since the trail was difficult to find. We are slowly losing our purest attitudes of trying to find the trail all the time. The snow has changed everything! Long story, a bit shorter, we finally got over the pass. 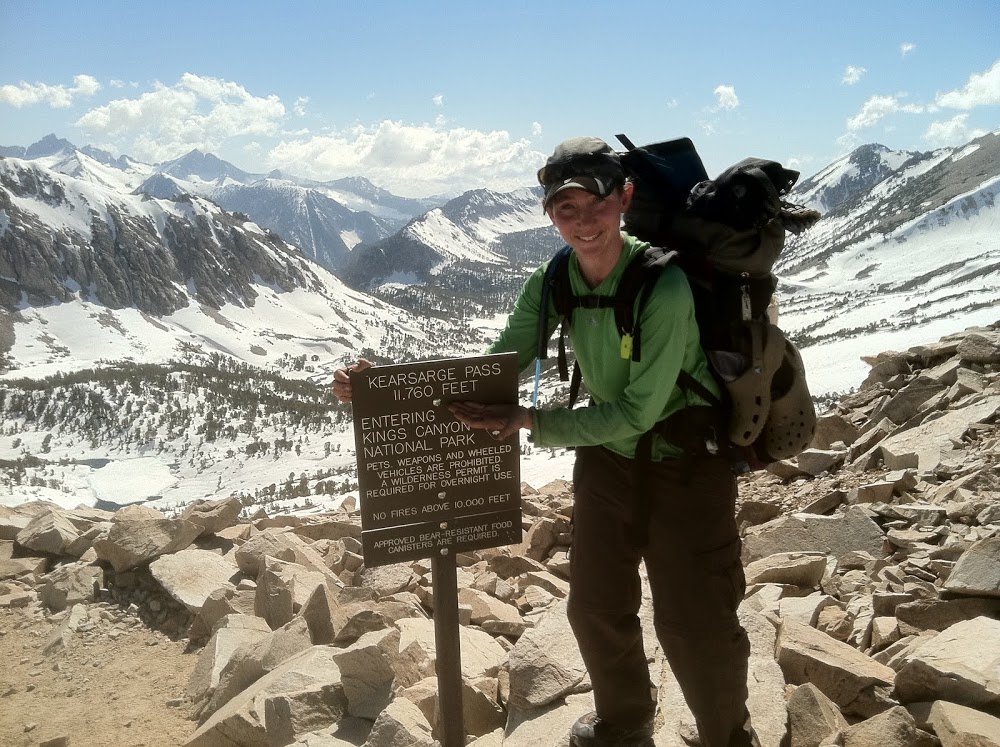 And luckily, there was a dry patch just over the pass where we were all able to camp after hiking for 13hrs and only doing 15.5mi. Thumper even helped me and Blister find a prime spot for our tents. He also let me know his dad reads this journal so hello to Thumper’s dad! The best part was that I got phone reception and I was able to Skype family and friends so they could see the scenic campspot! 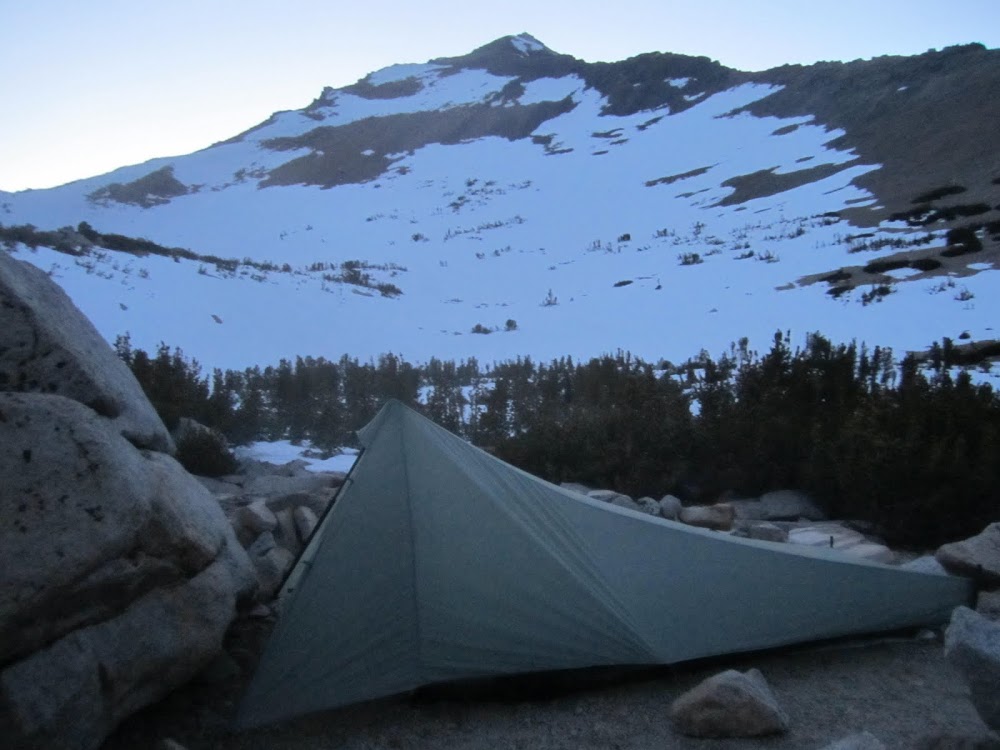 As we set up camp, the group of Chris, Nicole, Headbanger, and Happy Whale passed and decided to push on to the trailhead to get a hitch to town sooner. We also saw Pounder and Chili who we thought were well ahead of us. Turns out the two of them got lost for 20hrs when they crossed a creek and decided to cut through to where they thought the trail would turn…scary! So glad I have GPS! What a day!