Kearsarge Pass(side trail back to PCT)-Campground along Woods Creek(801.5)
Today’s Mileage: 14mi
Today was exhausting! The snow is really getting to me mentally and physically. I’m not the only one, but it is REALLY slowing me down. To wake up with it all around me and then hike 90% of the day in it just exhausts me. It is so hot here that it didn’t even get very cold last night and that just meant a longer day of postholing and trying to keep my balance in mushy snow on uneven terrain all day. My ankle that I had a surgery on is also not happy with the unsure footing. It is pretty sore and rolls on me many times a day. It especially buckles if the snow gives unevenly or unexpectedly. I’ll be so happy when we’re back on solid ground in 2-3wks!
The three of us and Pine set out early at 5:30am. It seems that Pine is going to stick with us for this stretch. He is 20yrs old and hiked the AT last year. He usually hikes solo on his own schedule, but has realized a group is needed in the Sierras. We wanted to do about 16mi and that is a lot in this snow. The warning is to expect to do one mile per hour and anything more is a bonus. Within the first few hours of the day we had to get over Glen Pass. The pattern in the Sierras is to do one pass(maybe two) per day and then get yourself in good position for the next one. Since the pass was early in the day and then we had a lot of downhill, we thought it would be pretty simple…not the case. Here is Glenn Pass. We hiked up over it. 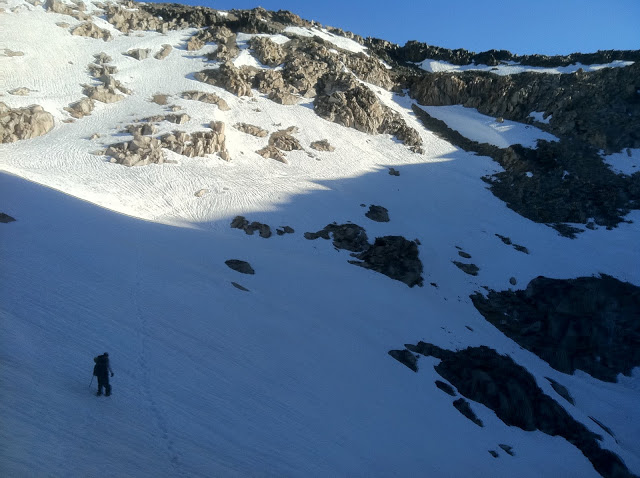 It is nothing major as compared to the other passes like Forester, but I was pent well before we even got to the top of it. I am carrying probably too much food and the weight combined with the snow day after day has worn me down. I feel bad for slowing the guys down and I even got frustrated early in the day because I felt like they were pushing too hard and making the pace unenjoyable. I’m just terribly slow in the snow and with the weight, I’ve definitely been slipping and falling more and that just adds to the exhaustion. The fun part of the snow is the glissading. Here is Pine on the glissade down from Glenn Pass. 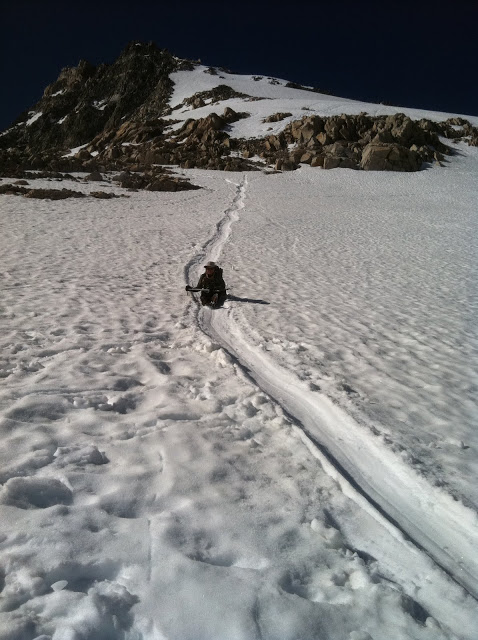 At one point, I realized the snow was like being on a big white treadmill because I have to constantly look down and it just never ends. I can’t relax because each step is uneven, slippery, and possibly going to break through and suck my entire leg in. I can’t even keep track of all my postholes and falls. I also want to add that there are a few dry spots to camp or even take a break. Today we were really tired and threw everything down for a long lunch break on an island without snow. It turns out that the small patches of land are where all the huge red ants go and our break was not relaxing at all. Urgh!
As the morning went on, Hobbes and No Knees passed us. Then Balls, Sunshine(11yrs old), and Rainer caught up with us around noon. We knew they’d catch us and we even left an hour and a half before them. They are like machines and always thought we were fast hikers. We told them we just hike much longer days. I don’t think Balls really believed me until today. Sunshine is awesome and she always likes hiking me and talking. We hiked together a good bit after lunch. Her attitude is always so positive and I’m always impressed with how effortlessly she hikes the trail. It’s also great to see her with her dad, Balls and the teamwork they have. Here they are at one of the countless stream crossings today. The crossings were constant the second half of the day and many were knee and thigh level. They were actually refreshing combined with today’s heat. 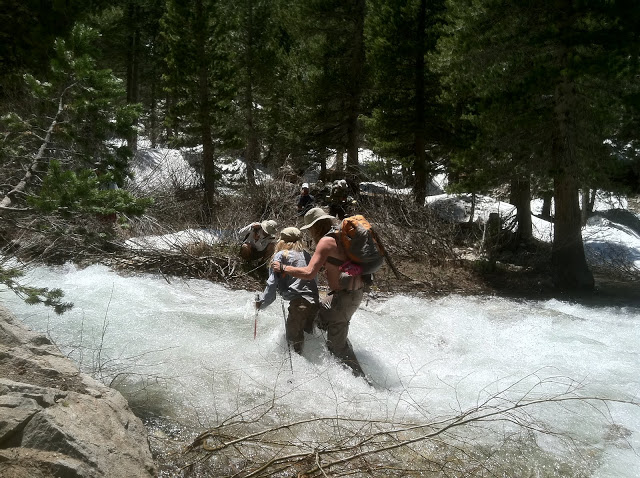 Balls always stands behind her on the crossings to keep her steady and instructs her on how to cross. Sunshine said that was her deepest ford so far.
At the end of the day, we finally got to a low enough elevation that we were out of the snow for almost two hours! I loved it and felt so much better. At the end of the day, the guys reassured me that I’m only a few minutes behind them when they stop and that I shouldn’t feel slow. That made me feel better. It’s also nice to have Pine around who is small like me and is also finding the snow and uphills challenging.
After our afternoon break, Rainer, Balls and Sunshine moved on to get closer (and possibly get over) tomorrow’s pass. We don’t know where they get the energy to do so much in the snow. We left our break spot crossed this great suspension bridge. 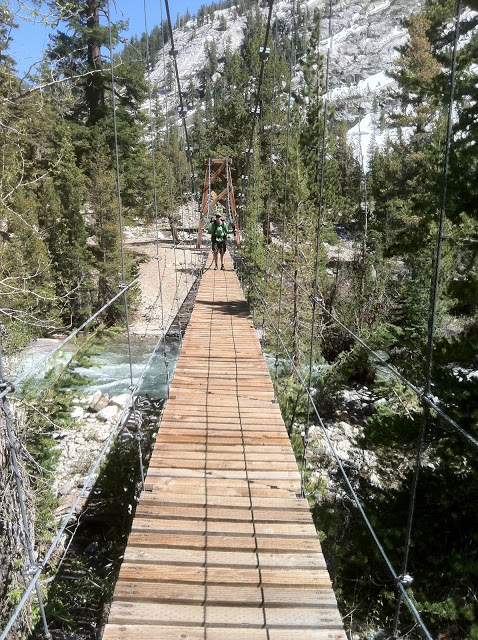 Then we ran into Colin, Alex(now Stag), and the Shotgun Sisters. They have formed Team Legs and have been a good day ahead of us for the past few weeks. They were all hiking completely naked! Did I mention that June 21st is hike naked day? No one else we saw today was participating, but we expect nothing less from this group. They had just undressed for the last few miles of the day. We ran into them just as we started our ascent back up toward the snow. For about an hour, I got the honor of hiking right behind them through uphills, stram crossings, and even spots of snow. That definitely was a change of scenery!
At the end of the day, we stopped at a campsite a little early because it had a fire pit and the guys were sold! That will make tomorrow a longer day, but I’m tired and not going to argue. We are hoping the snow will stay minimal and we can make good time. My vote is to lower our mileage like some groups are doing, but the guys may not have enough food to do that.