Day 58: Solo in the Sierras

Campground along Evolution Creek(851)-N of Bear Creek crossing(873.5)
Today’s Mileage: 22.5mi
As I mentioned yesterday, we stopped early knowing that our remaining mileage of 27mi would take two days. As we started hiking this morning, we found out that most of the morning was quick miles on dirt/rock trail going downhill. We had been hiking a bit spread out and around 8am, we all had stopped briefly at the same spot. My ankle(which I taped yesterday) was rally sore so I took a few minutes to cut the makeshift brace off. While I doing that, Pine was saying how energized he was and that he wanted to make a go at getting a bunch of the 27mi in today so we could catch the morning ferry to Vermilion Valley Ranch tomorrow. Top Shelf said he wasn’t sure because we were heading back into snow and had Seldon Pass and at least one big ford to get through. The guys have these discussions all the time and rarely follow through. As they left to continue hiking, Blister jokingly turned to me and said, “See you at 9:30am.” That’s the time of the morning ferry the next day…at least I thought he was joking…
I am used to hiking behind a bit and can either see the guys in the distance ahead or catch up every hour or so for a brea or just to touch base. Sometimes Blister or Pine will be at my pace when they are hiking slower. After that break, the guys were nowhere to be found. I’ve rarely gone probably more than two hours without some kind of contact. Especially out in the Sierras. With all the snow, there was much more route finding and room for error. Just two days ago, I told the guys I wasn’t comfortable with them going too far ahead when snow or patches of snow are involved because of how difficult it can be to stay on trail. Yes, I have a GPS and can find it myself, but it takes me forever and I don’t follow prints well.
To get to the point, one hour passed. Then two. Then four! I was PISSED! Did they really just ditch me in the middle of the Sierras after I specifically asked them not to? What team just up and leaves a team member behind?! Was this rally happening?? What were they thinking???
I had no choice but to just keep hiking. I knew Egg Man and Team Legs were a half day behind me if I needed anyone, but now I was so angry that I just wanted to do it myself. The trail got really patchy with snow and then completely covered and I tried to follow footprints. The thing is that footprints can also look like sun cups and were everywhere! I kept having to use the GPS on my phone with Halfmile’s maps. Thank goodness for those, but it can be a time consuming process. By 1:30pm, I got over Seldon Pass and had some rock scrambles and used my ice axe in a section. WTF! Who leaves someone to do that crap solo?! I was not happy at all. Later, I found out there was a different route to avoid that stuff, but I apparently followed the wrong footsteps…which turned out to be from the guys. Here is a pic from the top of Selden. 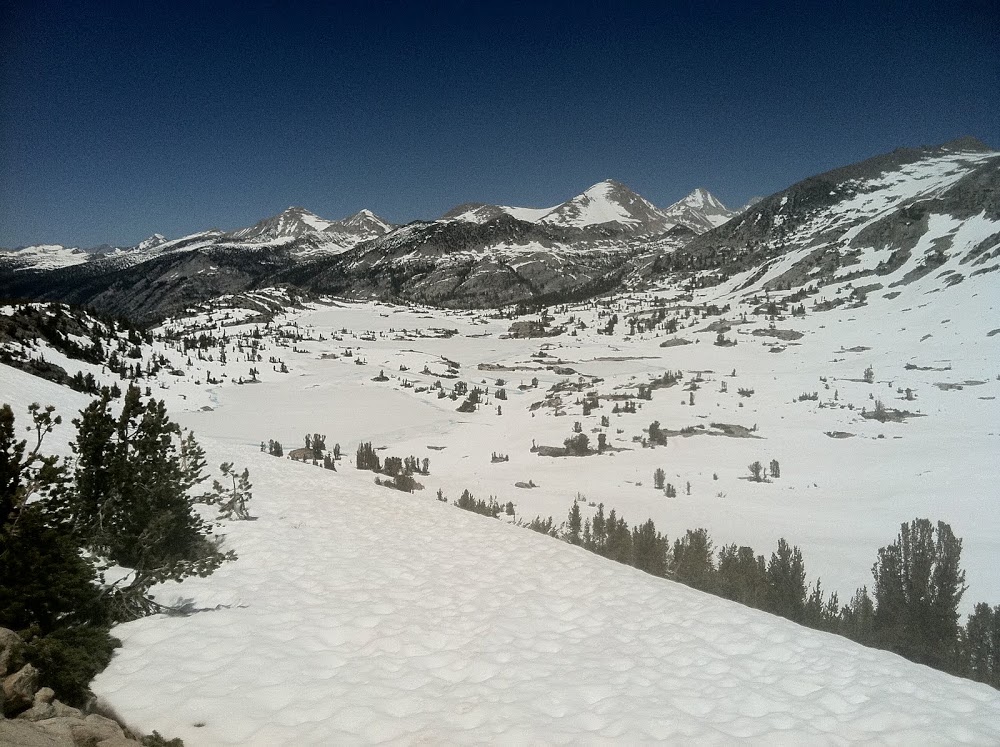 After Selden, it was miles of more snow, then patches of snow, and then a ton of stream crossings. The guys know I hate stream crossings and one of them was one that we heard would be tough. What were they thinking?! I was motivated by my frustration and will to get lower and out of the snow, so I got myself through a couple crossings. I’m super paranoid about fords, so I went up or dwon stream until I found something I was comfortable with. I hate logs and one of them gave me no other option, so I crawled across fueled by anger. Here it is. 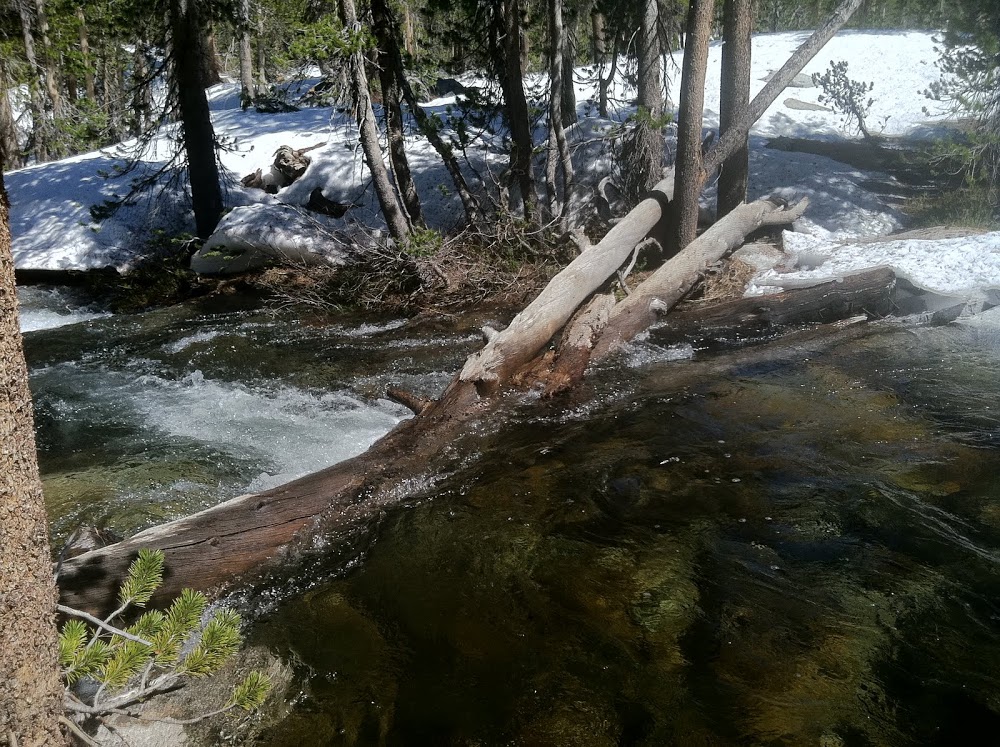 It took a couple tries, but I finally just went for it. I know that logs are easy for some, but I am not a fan. At 4pm, I got to our largest crossing to date, Bear Creek. We had heard about it and I knew it would be tough. When I got there, it looked impossible and that I’d have to camp there and wait for the group behind me to cross with. Then I saw three members of No Babies on the other side. It was Annie, Kylie, and Jams. I had never been so happy to see that group. They helped to instruct me on how and where to cross. Let’s just say that I’m small and it was not easy so more than one attempt was needed. The first spot I tried, it was as high as my stomach and I couldn’t keep my feet on the ground because of the strength of the current and was in there for a couple minutes trying. I got nowhere and got out numb from the waist down. I yelled over to Annie and asked her how she did it cause I’m slightly smaller than her and she said she couldn’t either and that Jams carried her pack and assisted her. I got out shivering and told them the guys weren’t near me. They said they had seen them about an hour ago and that just made me more pissed that they guys moved on without me after seeing how rough the ford was. I went down to a more shallow spot Annie had found further downstream and made that work, but it took all my energy to stay up and I was definitely cold after too much time in that water.
I walked the next 5mi with No Babies and camped with them for the night. I could have gone farther, but I decided it would be best if I didn’t see the guys tonight because I was so upset. I’ll make it to the ferry in the morning and see them then.