Today was another draining day. Balls, Sunshine, and I got going at 7am and it was nice to sleep in after the cold and late end to yesterday. My pants were frozen like cardboard, so I hiked in my rainpants the first half of the day. That turned out well cause I fell a ton today in the wet and mushy snow. My feet were still kinda numb from yesterday and never fully warmed up today, so it was like hiking with bricks on the end of my legs.

We had a four mile hike to Silver Pass and heard it had the best glissade, so we were looking forward to that. The pass was not difficult, but navigation was really difficult today cause there was a ton of snow and footprints going all different directions. Here is a picture of our approach to Silver Pass. 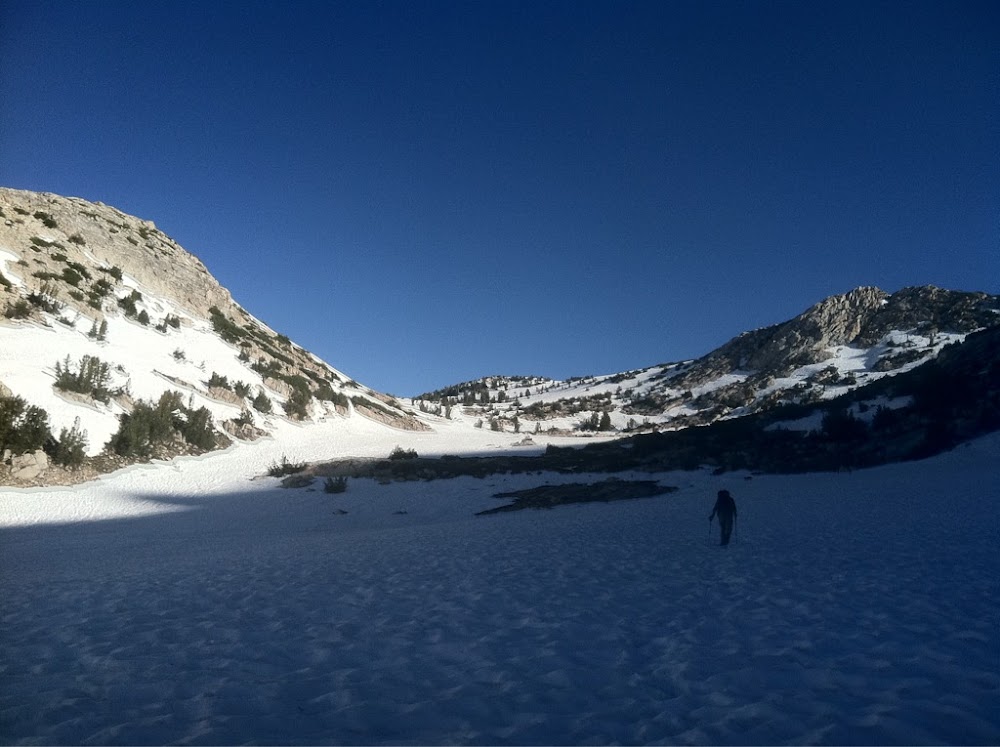 When we got to the top, we pulled everything out of our bags and let it dry. Even my tent and sleeping bag needed drying after last night’s condensation. It wasn’t very warm today and it was the windiest day so far in the Sierras. After our break, the navigation annoyances started. We realized we weren’t at the top of the pass yet and had to do some draining slogging uphill in the snow. On the way down, there was a short and underwhelming glissade. Then footprints went in different directions. We decided to follow the actual PCT route on the GPS. Many times, hikers don’t follow the trail when it’s hidden under so much snow, but it seemed like the footprints were wrong. It was totally draining and the snow was horrible today. Very wet, mushy, and deep. We finally got down a bit and turned a corner to see that the other footprints up top had led to a huge glissade that we could have done. Sunshine and Balls love glissading and would have loved it, but I was relieved because it looked more like one of those waterside death drops.

Our navigation bad luck continued all day. If we followed the PCT, it was horribly draining and many times on a slope that was near impossible to get footing. I was exhausted early on by the snow and frustratingly spent the day slipping and sliding. My stomach ached from hunger and we had a nice long lunch and cooked the dinners we didn’t get to make last night. Also today, I was postholing a lot. At one point, Balls wondered why I was the only one postholing and right as he said it, his leg broke right through and postholed and he gracefully tumbled and rolled before getting back up. Funny timing! The best part was that some of the downhill let us boot ski and that was a nice break from slogging. We did get moments on actual dry trail, but they were uphill switchbacks and I was worn out. Despite a draining trail, the views were great today! 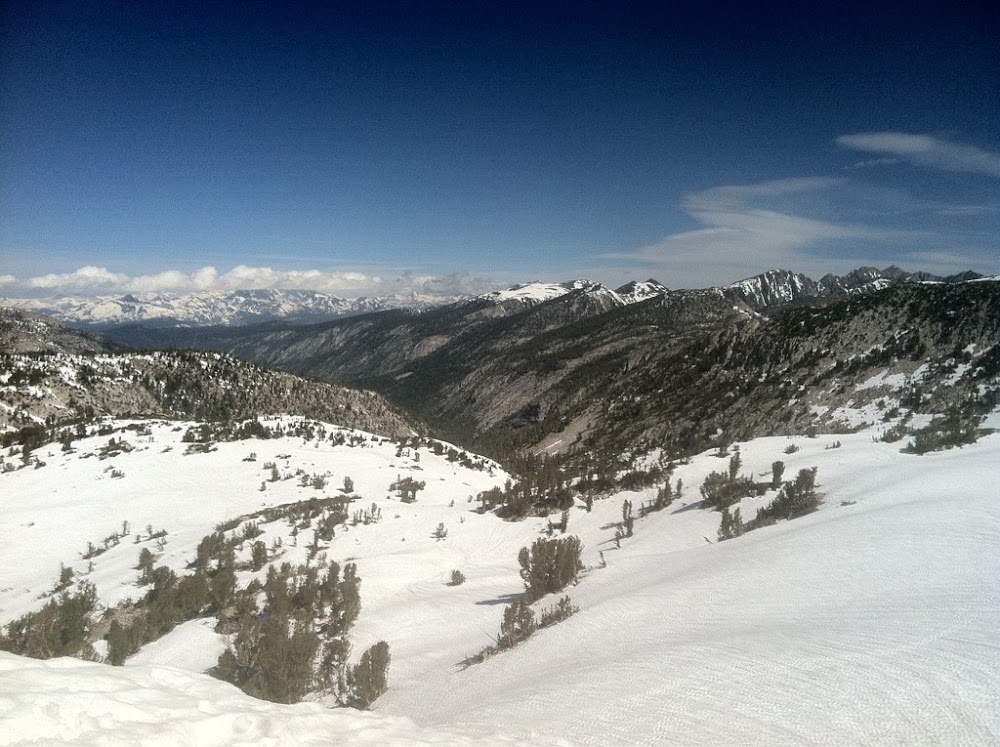 View from the top of Silver Pass. 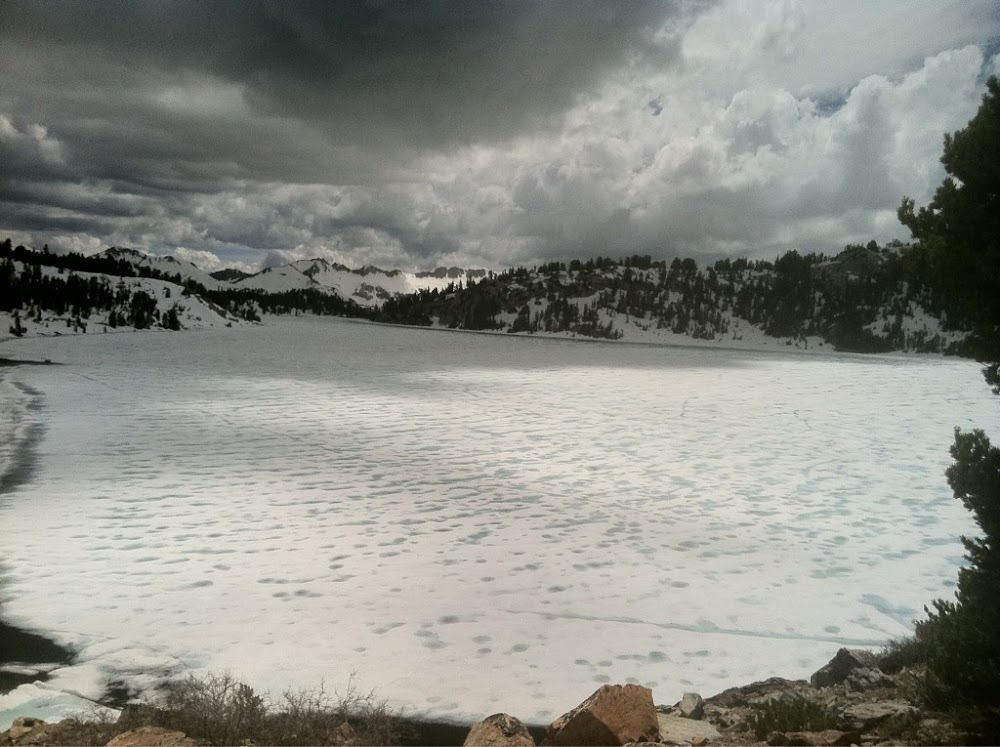 All the lakes are frozen over. 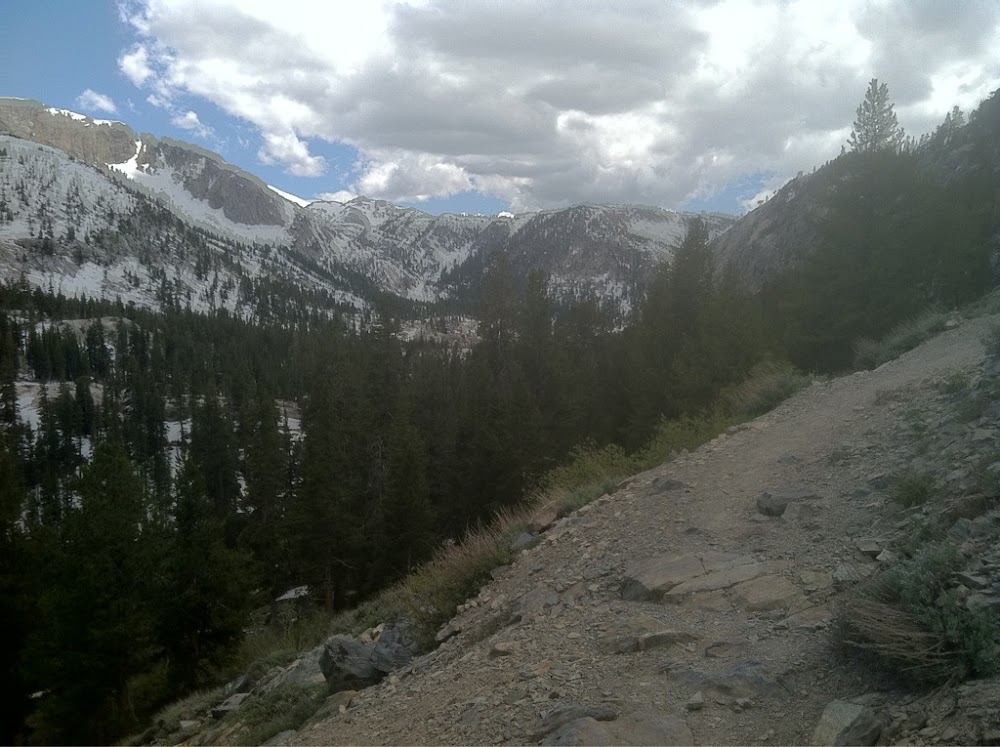 The clouds rolled in in the afternoon and it was quite chilly with the wind. Even tonight, it is gusty. I’ve yet to experience the Sierra storms that suddenly strike, but we think we’re in the clear.

We didn’t see any other PCTers all day. We did see one couple going southbound on the JMT though. We had a couple smaller fords today. Right at the end of the day, there was a short ford with a strong current. It looked easier than it was and both Sunshine and I got our feet pushed out from under us on the last part and got really wet from falling forward. The original plan was to hike one more mile, but we were both so cold that we just camped immediately after that. Again, my clothes will be wet in the morning! I am really drained from being cold and slipping and sliding all day. I can’t get warm and cooked my dinner while I bundled up in my sleeping bag. Not looking forward to cold wet clothes again tomorrow morning.

Tomorrow, we will get an early start and have about 10mi. Then we are going to go off trail into Mammoth. Balls and Sunshine have a package and are going to try to run some errands and then camp back on the trail, but after the last two days, a hotel and hot tub might be nice too…