Today was pretty rough. We had heard all the hype about this section being difficult and it definitely proved true today. Our most optimistic goal was to do 21mi and we barely pulled out a 15mi day after hiking for 12hrs!

We got going by 6:45am. All seven of us (me, Bottle Rocket, Snowblind, Scouts Honor, Balls, Sunshine, and Thumper) were pretty sluggish. The campsite we were at was really damp. Just having dinner last night, anything that was laying out got a layer of dew on it immediately. That made this morning tough cause everything was soaked. This was the wettest my stuff has been all trip. Even my sleeping bag had a good deal of moisture on it. The moisture probably added a good 2lbs to my pack. We were all anxious to lay everything out to dry after it warmed up and we got over Benson Pass. With the cold of the morning and the moisture, I started out with very cold hands and feet. I can’t emphasize enough how uncomfortable it is to start the morning by putting on cold soaked shoes and then walking on frozen hard snow. It’s like having frozen blocks on my feet and slamming them down on other frozen blocks. Very unenjoyable!

It took us about 3hrs to get over the pass. It was a good pass and nothing technical at all. Here’s the approach. 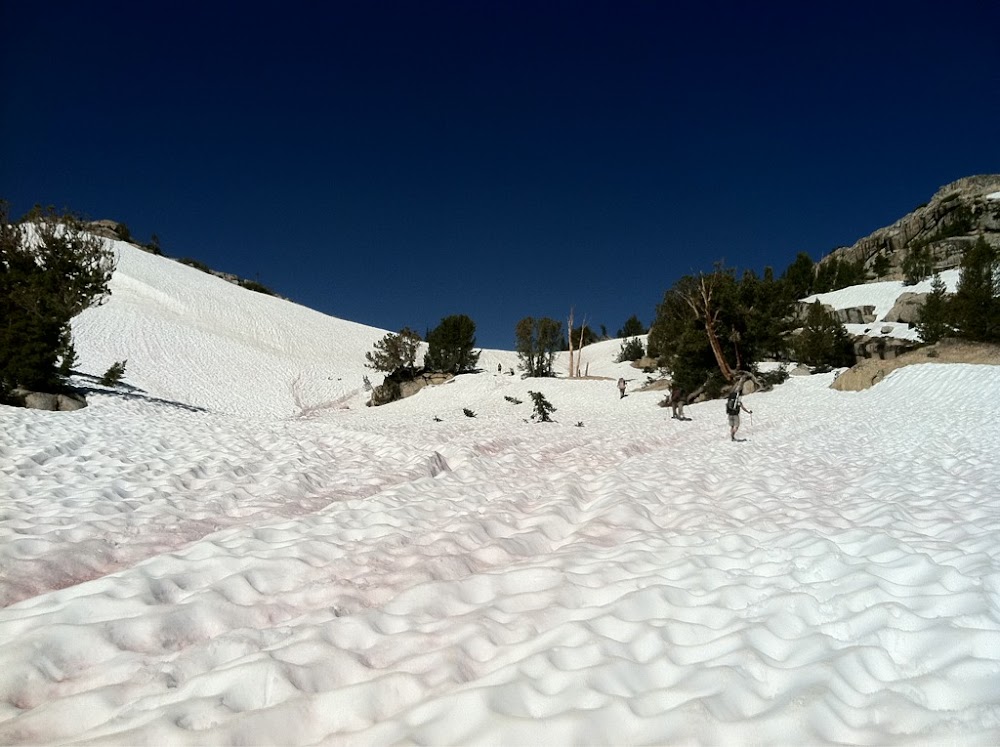 We took a nice long break for over an hour at the top and dried everything out. Many of us were pretty tired then and the day had barely begin. I could have laid there all day! It was after the break that everything went literally and physically downhill even though it was gorgeous. 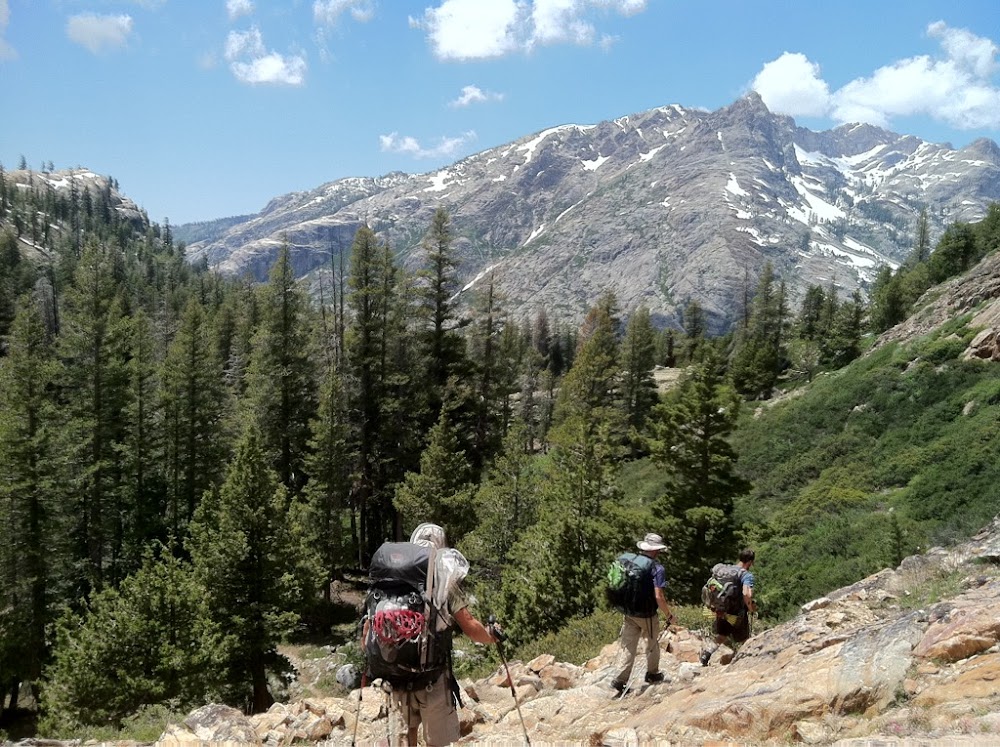 We had a couple more fords and they were okay. Mid thigh on me, but I was okay on my own. Luckily, the sun was out today because we spent most of the day wet. Don’t ask me how, but we had a navigation miscommunication and we got off trail…in a bad way. It took about an hour and a half to find a safe way to get back on and that was even sketchy in spots. We were all pretty frustrated and Balls said it best when he said, “Only a group of guys would do something like this!” Everyone kept their patience and we eventually got on trail. We probably did two extra miles in the snow of route finding and we were all drained. At that point, we had done 6 trail miles in 7hrs. That extra side trip pretty much eliminated any hopes of a real lunch break today and that was a bummer.

We moved on and the crossings got deeper and more frequent. Many weren’t even streams significant enough to be shown on the map. It was time consuming and frustrating. Here is one that poured right over the trail and is probably just a stream on normal years. 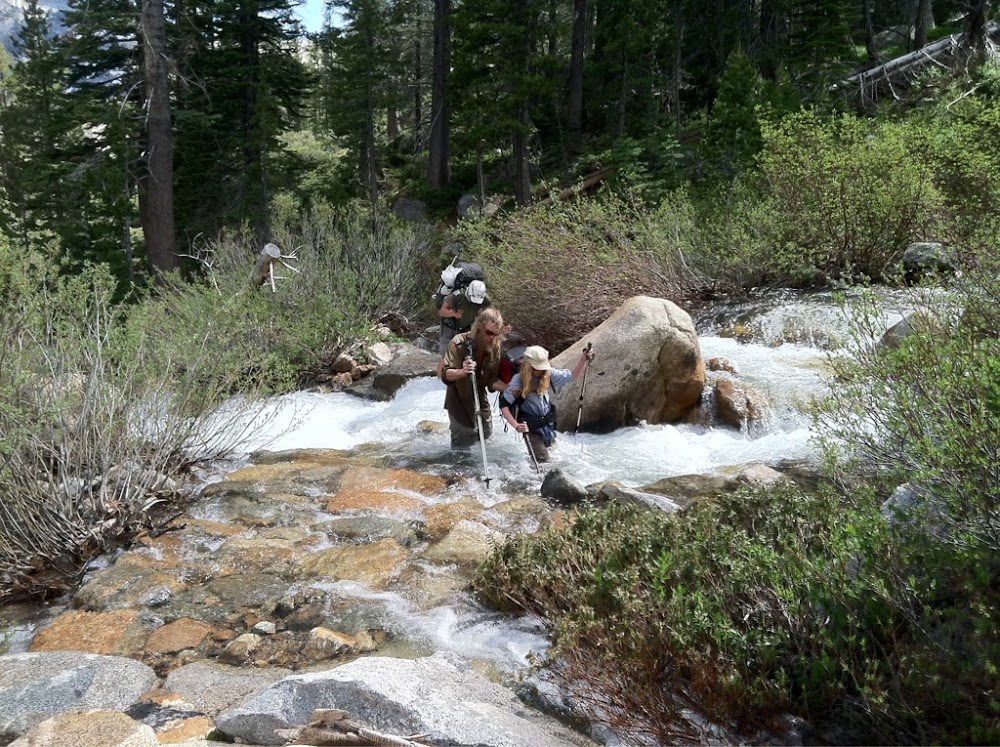 Then we had a log crossing…which I hate! I am kicking myself for not taking pictures of these terrifying ones, but I am usually too freaked out in the moment and I have to seal my electronics in a waterproof bag for crossings. I tried the log and was the only one that had to crawl across. I felt bad cause I kept shaking and freezing up and they all had to wait. Someday, I’m sure Thumper will send me the video because he tapes everything. Then we had a random tributary that was about 20yds wide and up to my chest. The current was calm and I tried putting my bag over my head like the guys. Halfway across, the current was too strong and I had to yell for assistance as it pushed me backwards and I reversed back to shore. Balls and Bottle Rocket came and Balls got my pack. Good thing he did cause one spot got almost to my shoulders and knocked me back and my arms went in the water. I should have just swam the dang thing. Thank goodness, it wasn’t too cold. It was like an unenjoyable lazy river.

After that crossing, we went up steep again over Seavey Pass. Again, a simple pass, but we had difficulty with navigation. The terrain was just exhausting in the snow most of the day. My ankle was not happy either. At the end of the day we had to follow a creek that we will cross tomorrow. It was on a steep slope and very frightening. One wrong step or slip on the snow and we would have slid right into the racing creek. We did this for about a mile and it felt like and eternity. 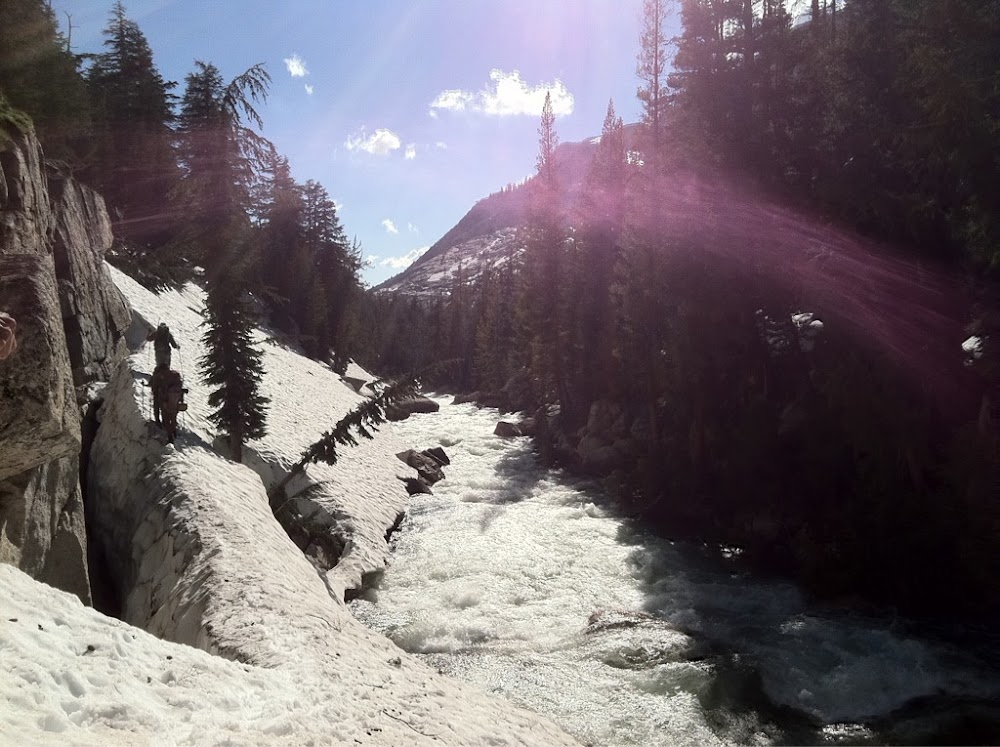 At the end of the day, we were all completely drained and laid down as soon as possible. I didn’t even want to set up my tent and was tempted to just lay on my Tyvek and never get up! 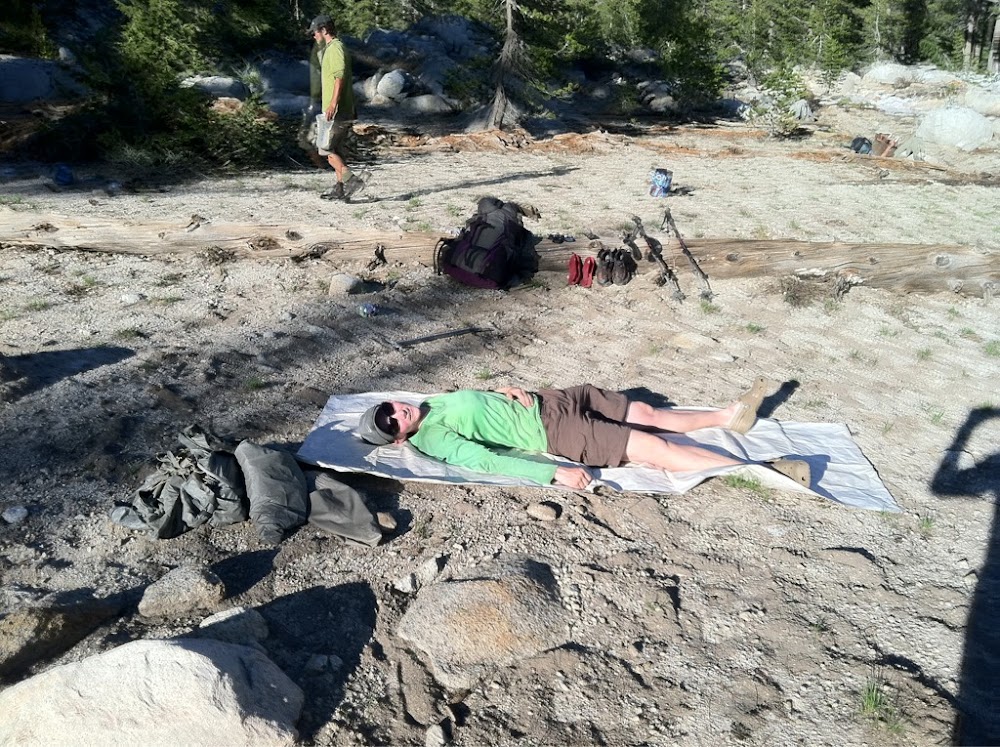 After we set up camp, Free Range and Beave showed up. Turns out they were camped right near us and did the same mileage as us in about three less hours…argh! It just wasn’t our day.

Other than the trail, this was also a tough day for me mentally. One of the toughest yet. This group is great, but it is a big group and there is a lot of talking. I tend to hike quietly more than with conversation. I can feel claustrophobic when there is a lot of conversation and lack of space. I felt like I couldn’t get away because we were all needing to hike close together and I tried to stay in back with my headphones on most of the day. I was really missing my friend Jennifer who backpacks the most with me back home and wishing she was here today. She will come on the trail for a bit in a month and that can’t come soon enough. I was listening to some of the songs she gave me for the trip and kept looping one that I don’t know who sings it, but it’s acoustic with a guitar and violin and goes…
“This time, I’ll be sailin’. No more bailin’ boats for me. I’ll be out here on the sea. Just my confidence in me…and I’ll be awful sometimes. Weakened to my knees. But I’ll learn to to get by…On Little Victories…This time, I’ll have no fear. I’ll be standing strong and tall. Turn my my back towards them all. And I’ll be awful sometimes. Weakened to my knees. But I’ll learn to to get by…I’ll learn to get by…On the Little Victories.”