You’ll notice that our mileage today was very low. That is because we had some very time consuming creek crossings. Today’s crossings were not enjoyable at all! We had many, but three of them are worth mentioning. Our first major crossing was 2mi into the day today. It was Kerrick Creek and was rushing pretty strong, but everyone’s been crossing on a log downstream. Again, I am horrible with logs! Scouts Honor had a rope that Thumper was able to tie from one end to another and I was thinking that would help me. Even the guys were shaking on the far end of this one. Sunshine usually does great on logs and even squatted down and needed assistance half way through from Balls. I was relieved that it wasn’t high off the stream and the stream only got deeper on the far end. I tried to psych myself up and tell myself it was the only way and that it was just mental. I put on my microspikes for more grip and gave my iPhone to Bottle Rocket to take a picture on the other side since I keep forgetting to do that. He accidentally recorded a bit that I will be able to post in the summary of this section. Here’s a picture of me crossing. 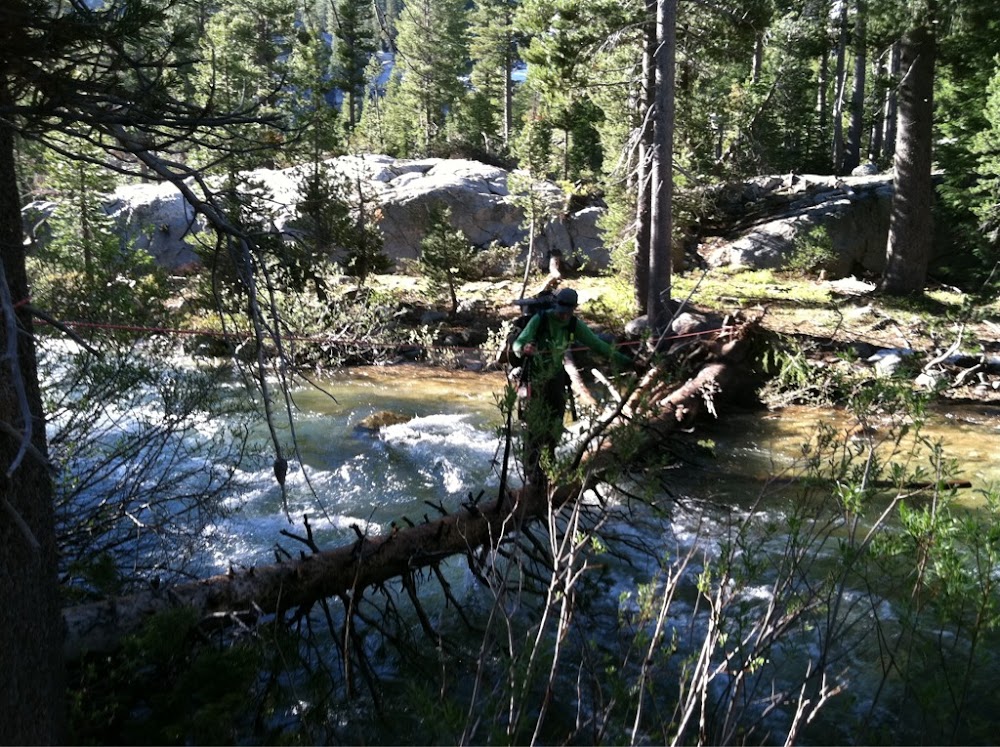 This picture was taken after I fell in! That was terrifying! I was fortunate that it was on the shallow end and only went up to my stomach. You will see in the video that I jumped out quickly. Being Wired, the only thing I was thinking was, “Oh shit! My camera! Get out!” Of course this happens on the one crossing I don’t throw my camera in a Ziploc. As soon as I got back up, I had the adrenaline pumping pretty strong and somehow felt a bit calmer having already experienced what it was like to fall in. Once I got across, I had to take a moment to myself to prevent a meltdown with all the adrenaline I had pumping through me. I was shaking and definitely thinking of how bad that could have been. I hate logs!

After Kerrick Creek, we hiked for a bit and were thankful for little snow. We came upon Stubblefield Canyon Creek. It was wide (~15yds) and slower moving, but had depth to it. Snowblind went for it and crossed with his pack over his head. It got really deep and more swift about 2/3 of the way in for a bit before it hit a more shallow shelf. It went up to his shoulders and he’s tall. Balls is tall and had to cross six times! Once to take his pack, again for Sunshine’s pack, and finally to get Sunshine. Bottle Rocket, Scouts Honor, Thumper, and I accepted that we were going to have to swim the deep part. We stripped down and waterproofed our packs as best as possible. I was able to get upstream a bit so the current wouldn’t push me past the shallow end spot and got it over with quickly. Everyone did great. Thumper used his Neo-Air as a raft and it kinda works okay. Balls used it to bring Sunshine across who was very worried to be going in cold, deep, rushing water. Balls got her across quickly and she toughed it out well after some initial worries. She always has a positive attitude after the stressful moment passes. Just awesome for an 11yr old! After that crossing, we were all quite cold and wet, so we took an hour and a half break to dry off our bodies and gear in the sun. We were all quite proud if getting through one we had to swim and I got this picture in front of the creek with my super swimming arms! 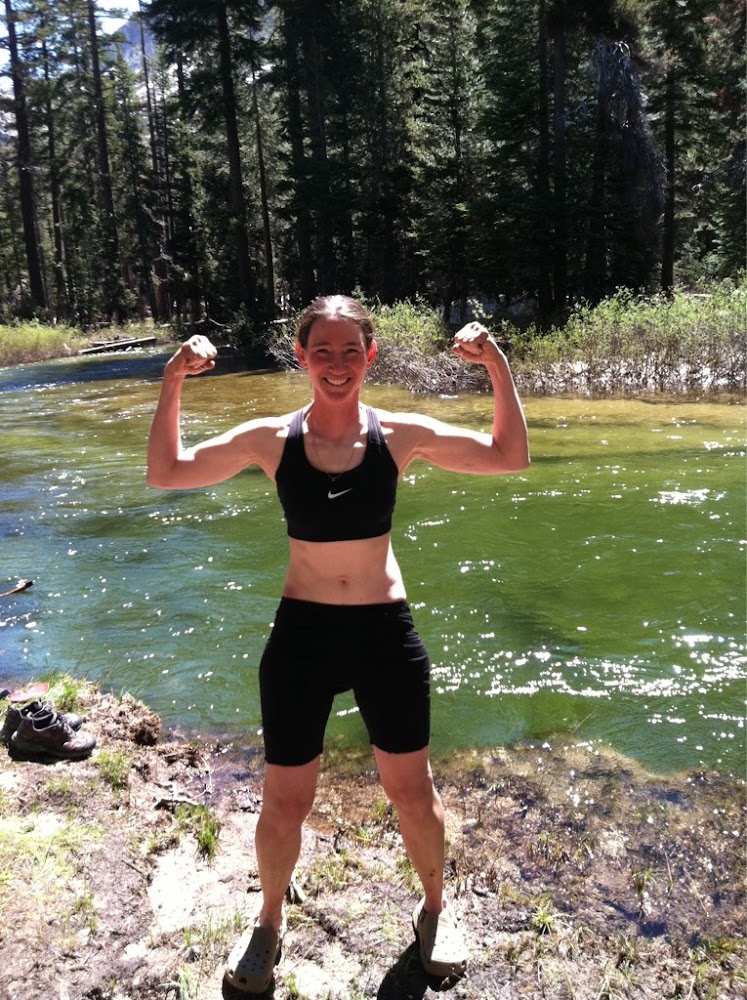 The rest of the day, we had steep ups and downs and more water on the trail and crossing. We moved in and out of snow and I was thankful to not be in it all day. The third big crossing of the day was what we think is called Jack Falls and it was in the snow. Many of the things we’re crossing this year aren’t even noted as significant crossings on the map, so we never know what to expect this year. It was even wider and deeper than the last one! Ah shit! That’s all I kept thinking. I hate cold water and this one was another one I’d have to swim! The guys were all strong enough to get across with mostly dry packs by getting them up on their heads. Again, Balls went across multiple times and was able to get Sunshine across. I always want to try on my own and I hate making the guys get in cold water again to help me. I had my pack on(unbuckled) and tried to go for it. It was COLD and took my breath away. In the first 1/4 of the stream, it was at my shoulders. My pack was pulling me off the floor and it was sand, so I couldn’t push against the current to get across. It was actually pushing me downstream. I tried taking the pack off and still couldn’t push against the current. Balls got in again from the other side. We communicated that I was okay and he took the pack while I swam back to the shore I started on. Damn! I was gonna have to get back in! My pack was now too heavy for Balls to lift over his head and he took it across. I went further upstream, got in and swam hard as the center current pushed me downstream and I made it with no problem. Again, we took an hour and a half break to warm up. We are all thankful that it was sunny today! You can see the creek in the background. 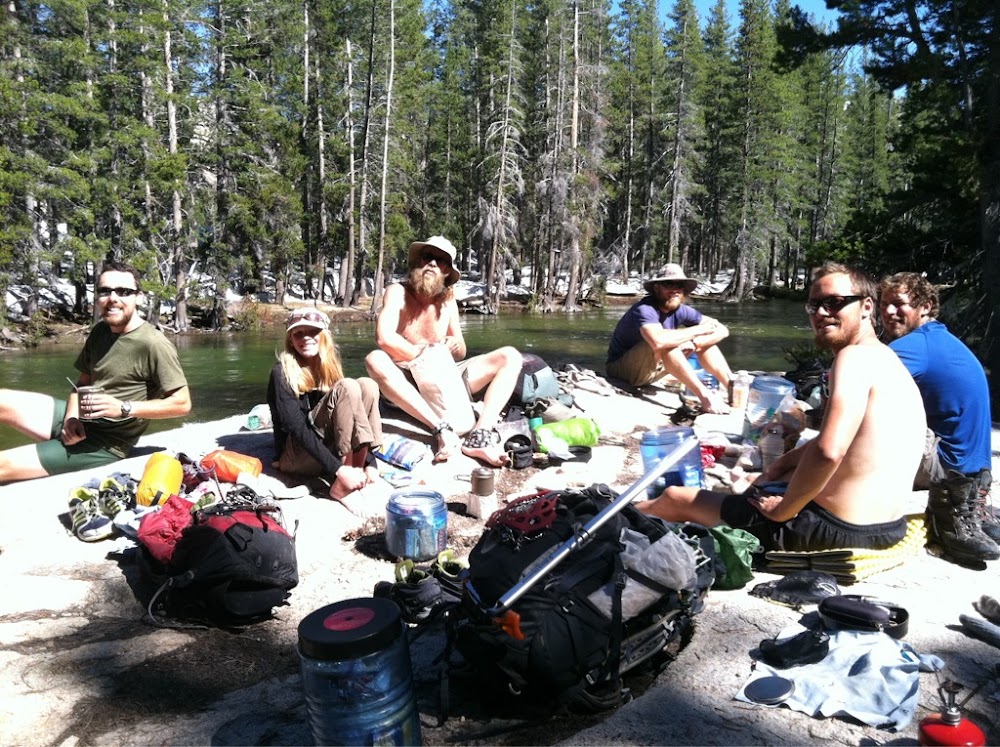 I had to pull out everything and dry it again! Everyone else had dry packs because they were able to hold them over their head when they crossed. I was COLD and never do well after cold water. I put on all my warm clothes and did my best to warm up. I was cold the rest of the day.

After the break, we moved up and stayed in the snow. This section really does suck and we all decided to just camp a few miles after that crossing. I appreciate this group being so positive through all of this. All the guys have done a great job of just giving in to the situation and now are just having fun with it, so that’s great. For example, on the first crossing, Snowblind lost his Skippy peanut butter that he’d been dropping all day yesterday. The guys all mourned the loss of Skippy all day and it became an ongoing joke that we were moving on because Skippy would want it that way. Balls & Sunshine even had a memorial at camp for him. We all knew this section would be difficult and we’ve decided that trying to make it positive is more important than big miles. Those crossings wore us out, it took a full day, and we were happy to camp after only 11.8mi. Little steps will get us to Sonora eventually. Hopefully only two more days!