Day 73: Light at the End of the Snow & Water Filled Tunnel

Let me start by saying that thankfully, none of the stream crossings were above thigh height on me today. Yay! We got going by 7am and it was pretty cold last night and this morning. It got below freezing and we all had a lot of frost on our tents as we rolled them up. I shook mine pretty well to try to get the frost off and three golf ball sized snow balls formed in my tent from the frost just on the inside. I’m so thankful to Rockin’ who gave me surgical gloves to wear over my hiking gloves and keep them dry on mornings like this. Bottle Rocket’s shoes were even frozen solid. We all can’t wait for the day when we can wake up and put on dry shoes. Just the thought of having to slip my feet into wet, ice cold shoes and the feeling when you first stand up as the water seeps into your momentarily dry socks is enough to make me hit snooze each morning. Before we left, we all gathered around Skippy’s memorial as Balls read a eulogy of sorts he had written in his journal. It was a fun way to kick off a day that started with difficult terrain.

We hiked the first few hours on frozen snow that was pretty draining. It was the mounds of snow that makes me feel like I’m on a rollercoaster of ice. Instead of the flat trail underneath, we have to avoid sun cups while hiking up a steep 6ft mound just to go immediately back down and up another one. It is pretty exhausting and I was worried we’d be doing that all day. Luckily, it was only about three hours. Then we went over Dorothy Lake Pass and it was simple. It didn’t even feel like an actual pass. The views were nice as we got over it. It’s nice to see a lake that isn’t iced over. 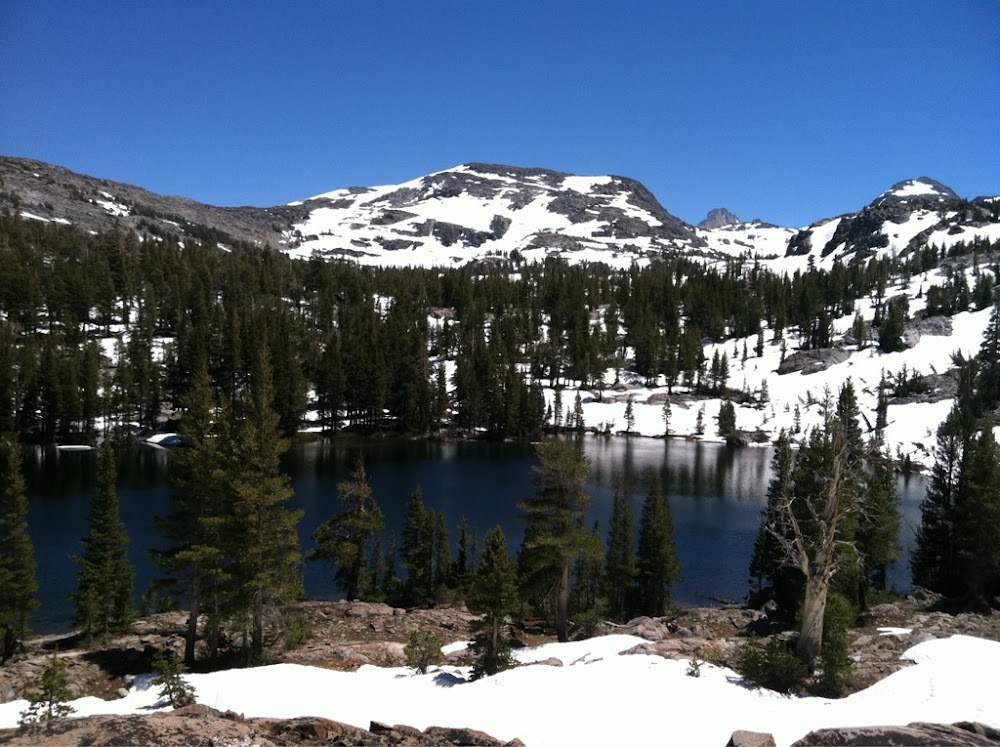 After the pass, we had a big moment. We hit Mile 1000! That was worth celebrating and we tried to form the number with bodies. 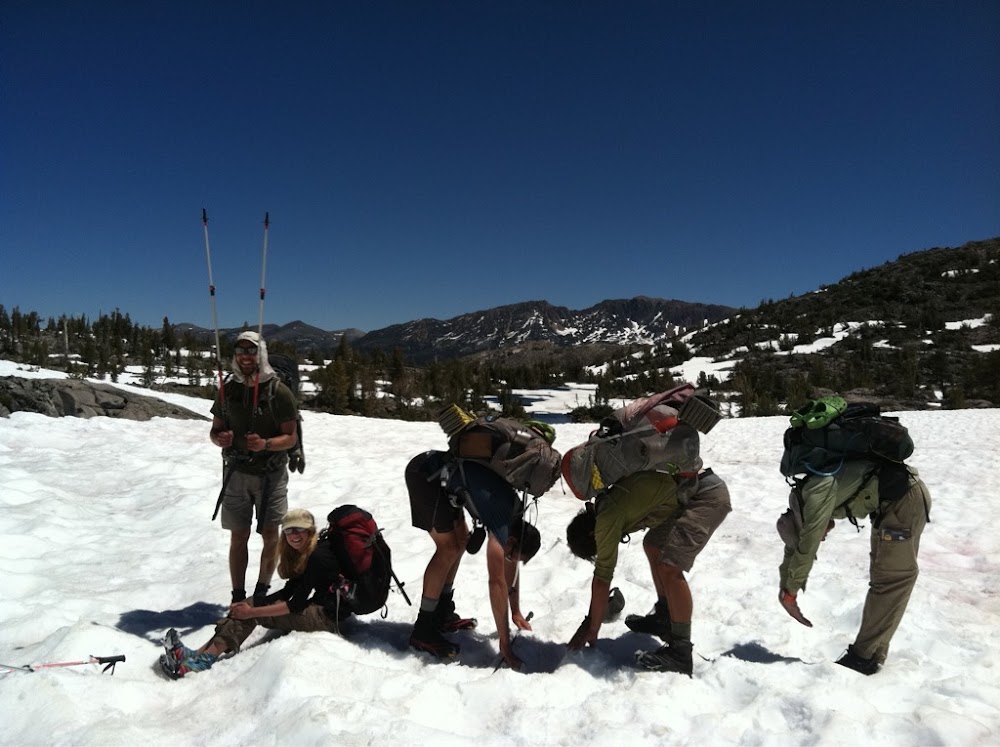 Then we took a 1.5hr lunch and laid out everything that needed drying after our frost covered night last night. 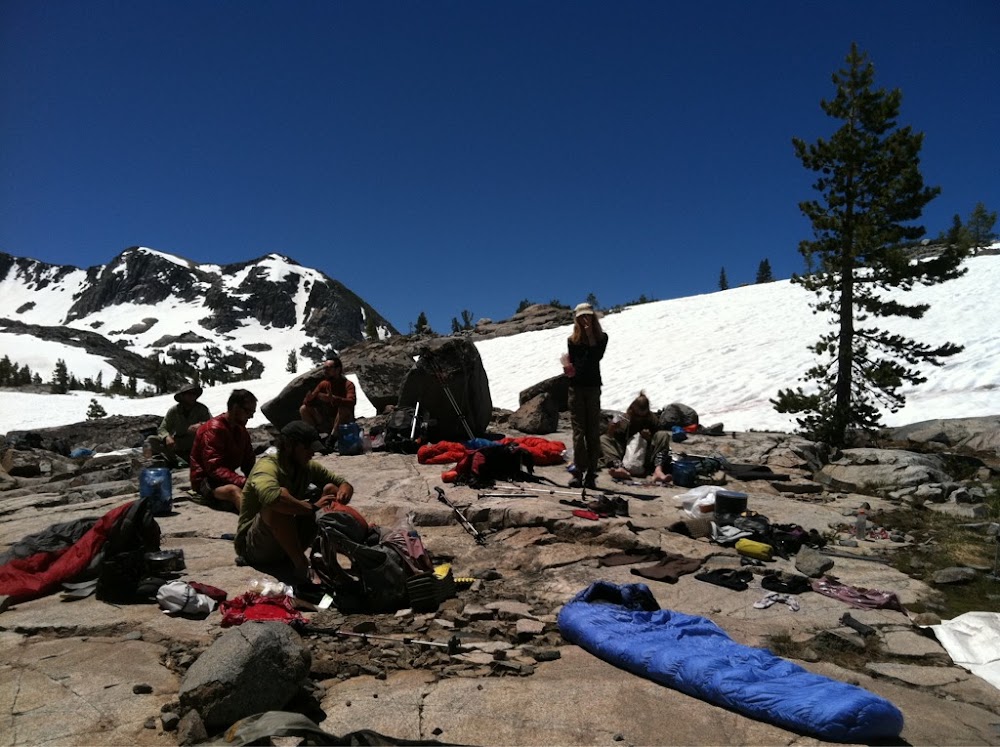 The guys were real chatty again today and it just perplexes me with how much they can talk. I’ve never seen hikers talk so much while hiking. It’s always random and never personal. Just a random topic and they are off and running. Everyone seems to know random factoids and likes to bring up odd hypothetical questions and just go with it. I tend to lose focus and zone it out. For example, there was a discussion at dinner about the concept of creating dehydrated water and then an argument on whether water can be compressed. Other than early this morning, there was pretty much nonstop conversation all day. Even multiple conversations around me at once. The cutest pairing is that Sunshine and Snowblind seem to have endless conversation. Again, I went to the headphones after lunch. It’s just too much for me, but it’s great that they are loving it.

Soon after lunch, a miracle happened…the snow faded and we had actual trail for about two hours. We loved it and felt like there was hope that the snow would end! Even in the distance, we saw mountains and hills that weren’t completely covered in snow. 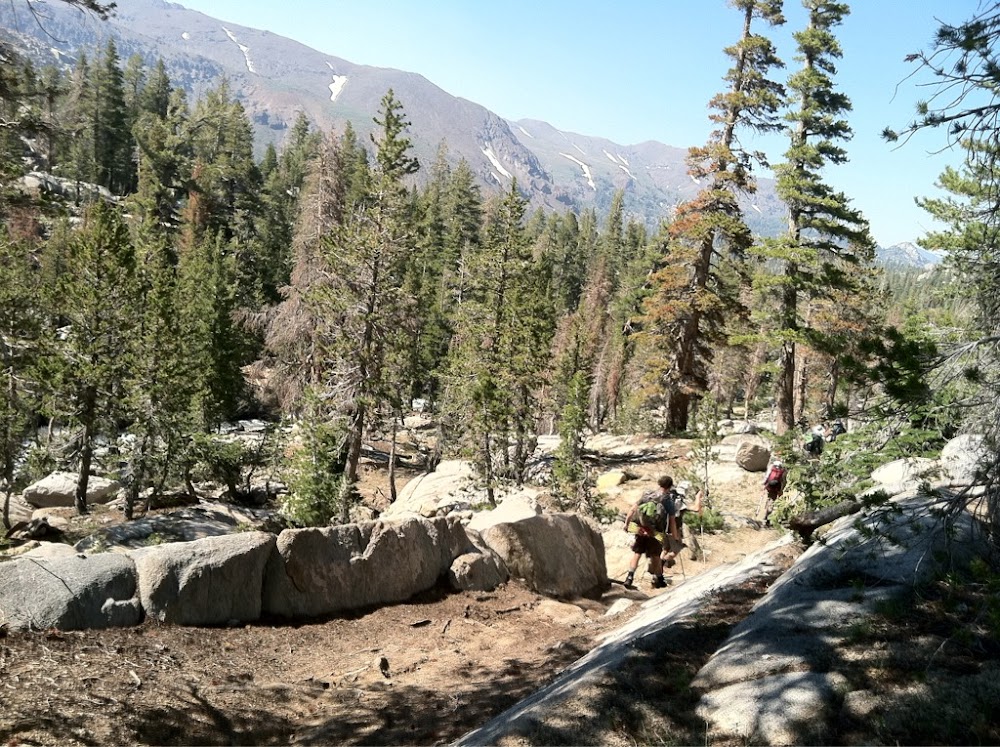 It was so motivating and we flew. We got to camp by 5:30pm and it’s great to be in my warm sleeping bag early. The final hour of the day, we moved back up into the snow and started our ascent toward Sonora Pass tomorrow. It is already in the 40s tonight and the sun hasn’t even set. Eventhough it will be a cold morning tomorrow, we decided to get going at 6am so that we will get to town sooner. Yay! This section is almost complete!

One other thing to mention. My stomach has become a bottomless pit this section and I can’t seem to eat enough. I’m just barely going to make it this leg off what I brought and I usually have tons of extra food. I’m looking forward to some big meals in town tomorrow!