Today was a town day, and I got going by 6:20am. Funyan and Meow Meow were also camped with me and left at the same time. They hike faster than me, so I was a bit behind them and we all got to Belden right about 10am. I started off the day really enjoying the trail down to town. It was gradual and sandy, so my ankle was happy. 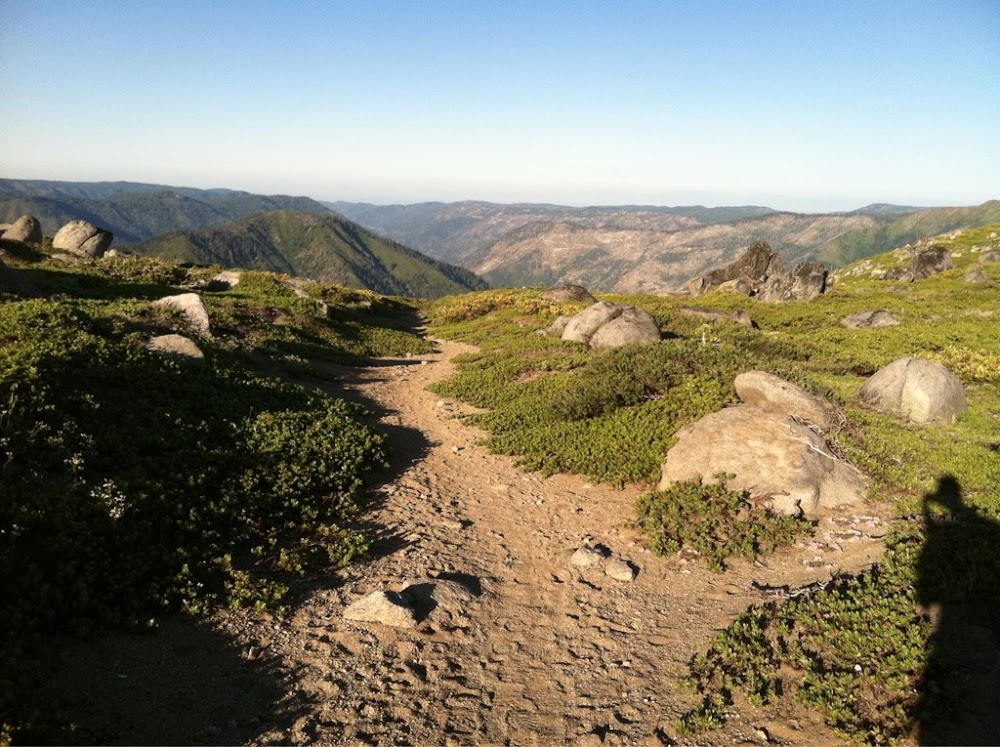 I ran into another pair of southbounders who flipped. Their names were Rue and Marmot. The final few miles became switchbacks that had a slight slant that killed my ankle and I had to put on the more sturdy brace that digs into my calf. It helped the ankle though!

When we got to Belden, I was able to get a quick hitch one mile down the road to get our packages. When I got there I saw the group ahead of me (Annie, Dutch, Spock, Twiggy, and Spice Rack) there. They were having trouble getting a hitch to the next town to resupply. I got my packages and Funyan and Meow Meow’s for them. I went back to the Belden Town Resort, which the trail runs through. I had to walk back the mile because that group was hitching and it was just going to be easier to walk. It was getting pretty hot outside. Funyan and Meow Meow left soon after that to start the hot climb out of Belden.

I stayed a couple more hours to eat, organize my food for the next leg, charge my phone, and catch up on calls and emails. I got a great care package from a reader, Frank that included a whole pack of Chips Ahoy cookies! I immediately got some milk and I could have stayed there all day. Thanks Frank! Had I know the hike I was in store for, I probably would have!

I think the 12mi I just hiked out of Belden might be the worst miles on the whole trail so far. It was horrible! First off, it is known for being hot and exposed and it definitely was. I was dripping sweat, which I didn’t even do in the desert. There was no escape from the sun beating down and I dumped water over my head the few times I came across it. Heat is one thing, but the condition of the trail is another. It was not maintained at all! They say there is a lot of poison oak in this area and I wouldn’t be surprised if I got it today. Look at what it looked like! 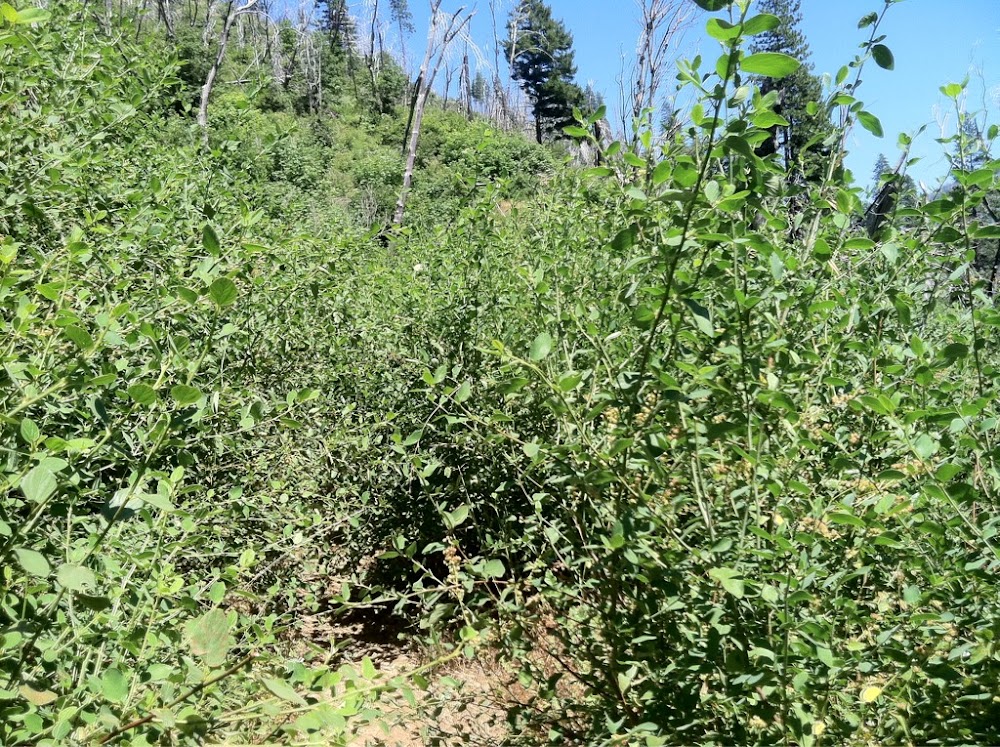 That is what I had to go through continuously for the first two hours uphill and it was taller than me. I need space and the constant touching in the heat was really challenging for me. I went up over 4000ft and some of it was gradual, but a lot was unnecessarily steep and then it would drop again just as steep, just to go back up. To add to this, there were a lot of fallen trees to climb over. One section I was too frustrated to stop and take a picture, but one stretch looked like a land slide had just thrown all the trees over the trail. Finally, there were stream crossings. One was up to my knees. It was just ridiculous. I noticed there weren’t many blazes and no official PCT symbols that would normally be on the trees. I think the trail is too embarrassed to claim it as part of the PCT! I would be! Okay, venting is over.

I pushed on out of frustration until 7pm and found a great spot. 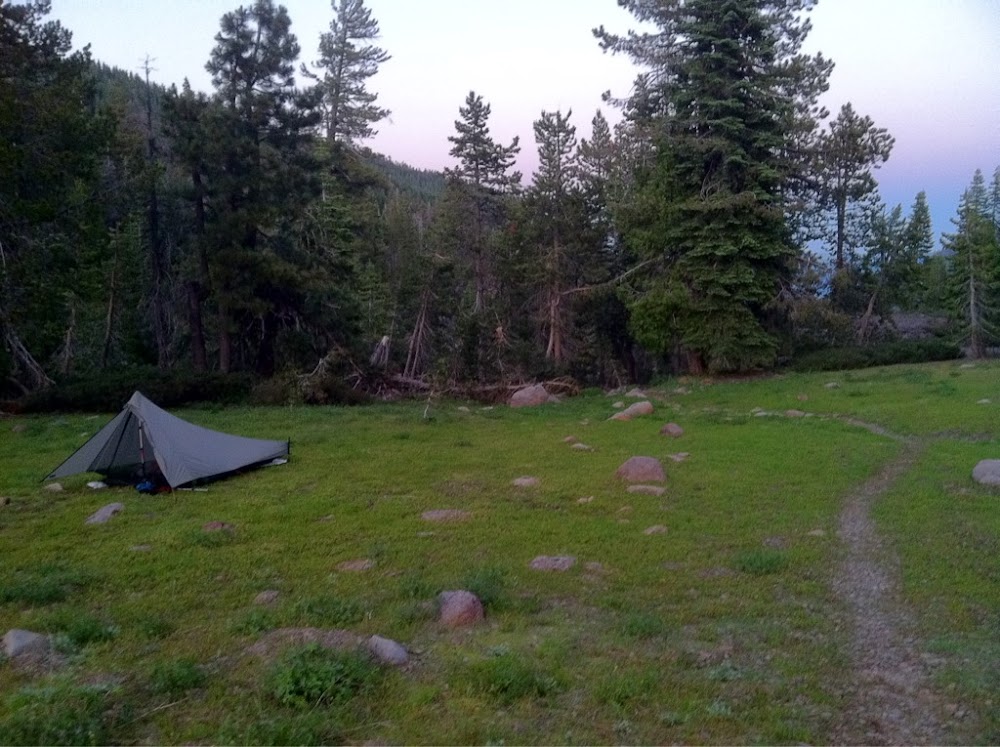 I am thinking I’m still ahead of the other group, but that Funyan and Meow Meow are a bit ahead. There is a chance I passed them and didn’t notice with all the distractions though. This is my third night tenting on my own this trip and I’m liking it. I can hear spotted owls hooting. The biker I met the other day said she works full time with them I this area and that I’d hear them at night. Cool!

The most exciting part of this night is that I am getting enough signal to watch Hulu! I watch Friday Night Lights while I ate dinner and I’m about to watch the rest of the episode. Love it!!! Tomorrow, I will reach the halfway point on the trail. My headphones have gone out and one thing I’m sure I’ll be repeating in my mind tomorrow is the FNL motto, “Clear eyes, full hearts, CAN’T LOSE!”