We woke up this morning to dry tents despite the rain as we went to bed last night, so that was nice. Jennifer and I got a good start at 6am and it was a great morning. The temperature all day today was very mild and cool in the shaded woods, so it made for great hiking weather! We started off by going around the base of Mt. Thielsen. 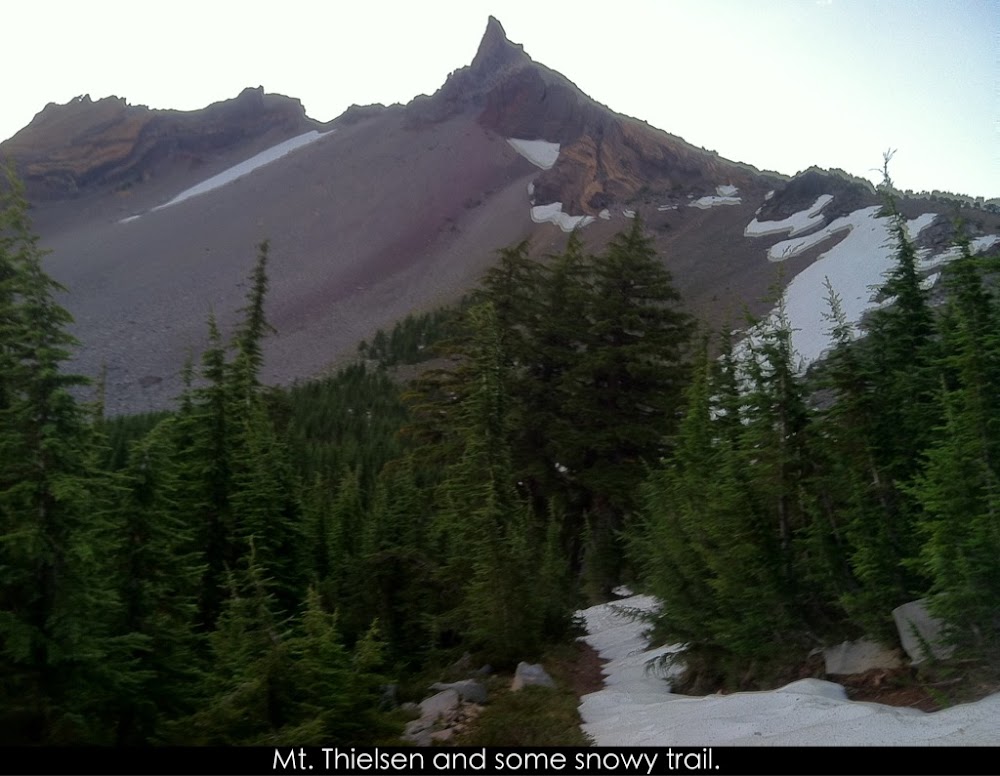 On the north and west side, there were patches of snow we hiked over, but it is almost not worth mentioning. It was only a mile or two of snow and patchy enough to get through without a GPS. Plus, it seems to be melting quickly. Whew!

We spent most of the day in the woods with gently sloping ups and downs. Again, we can’t believe how great the terrain has been for Jennifer’s visit. We both just love Oregon and can walk in woods like this forever. 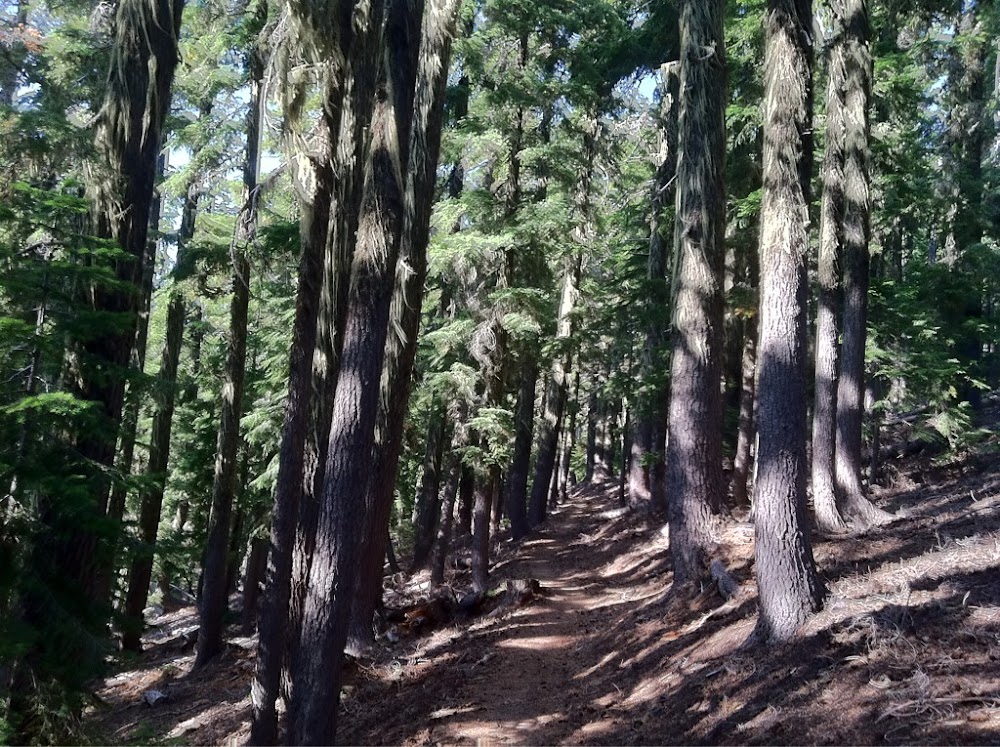 The highlight of the morning was that we reached the PCT highpoint for Oregon and Washington. It didn’t have a great view or anything, but I was psyched that there was an actual sign by which we could lay down and have a snack to celebrate! 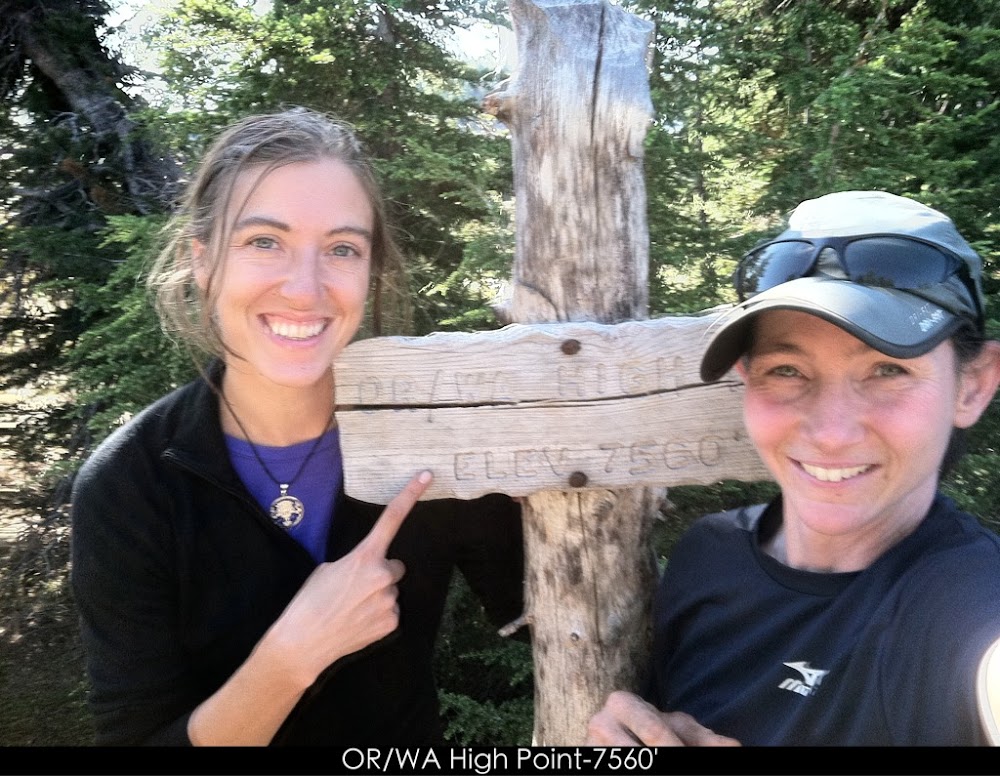 We saw many other hikers today and that is always fun. In the morning, we came across the first true southbounder. His name was Brian and be said he started in Canada on July 11th. It was fun to meet him. Later we met Bunny, a northbounder who was also taking short days because his girlfriend was joining him. In the afternoon, Jennifer and I stopped for lunch and some of the hikers I knew that were behind us started showing up. We were passed today by Sparrow, Tum Tum, Chris, and Drop Dead. They also told us that the crew I’d been hiking with recently wasn’t far behind. They had all camped together at the water cache we left because of the early storm last night. They were thankful for the water cache and also to Sue and her husband who also left water there for hikers. I had met Sue at Mazama Village and she is a regular reader of the journal, so thanks for helping out with water. It was greatly appreciated by many hikers last night! Drop Dead was nice enough to bring me my solar panel that had been sent to Mazama Village. I was very excited to finally have a new solar panel after my original one broke a couple weeks ago. I took this picture with Drop Dead and thought his dad would get a kick out of seeing him on the journal. 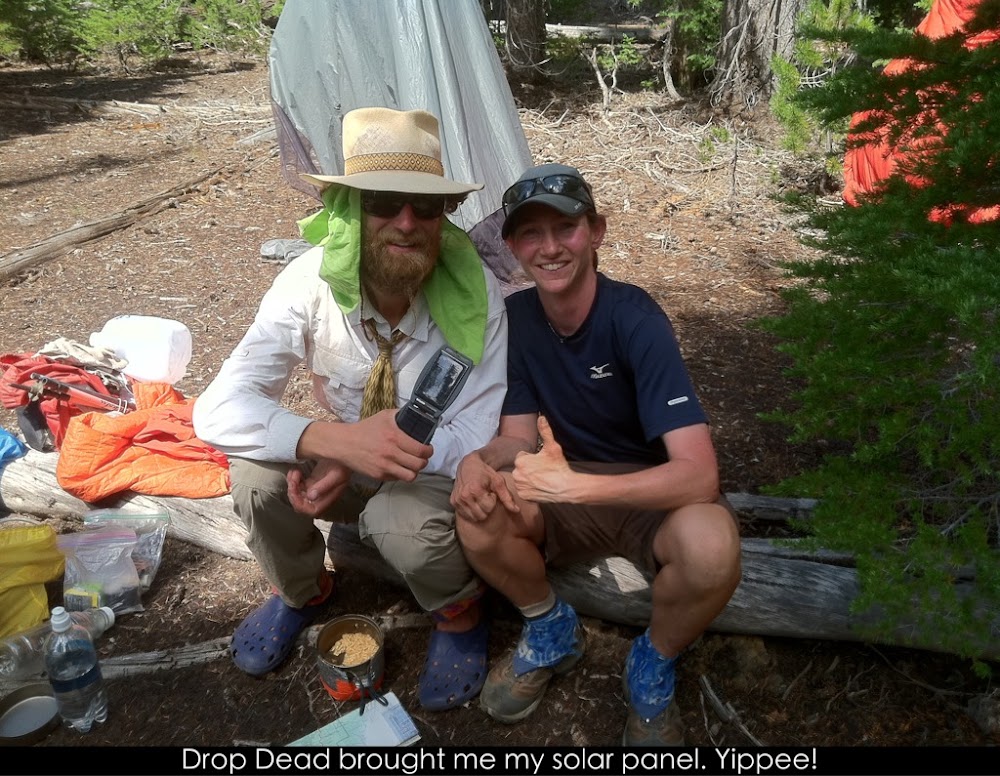 The day went by pretty fast and Jennifer did great again! We had planned to stop at 20mi, but she is doing so well, that she felt like going further again. The extra miles means we will have more time to spend at Shelter Cove Resort(my next resupply location) when we get there in a couple days. As we walked our final few miles, we noticed the clouds were gathering again and we heard distant rumblings of thunder. We picked a spot to camp and got our tents up quick. It started to sprinkle and we hoped to dodge the heavy rain. We tried to cook dinner at a viewpoint to watch the clouds, but it started raining and we had to retreat to our tents. 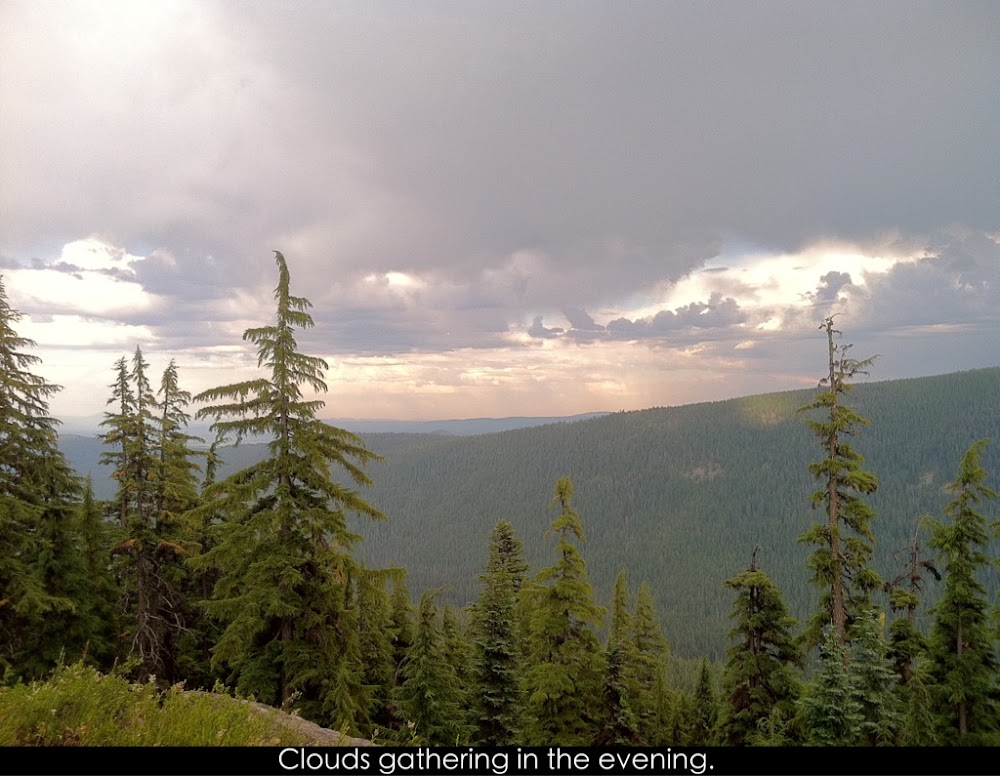 It rained for a half hour or so and I made dinner from my tent. When it stopped, it was nice enough to come out and eat together. Just as we finished and brushed teeth, we ha more lightning and thunder in the distance. It rained as we went into our tents and, like last night, I enjoyed it. It just rained hard for a bit and it was nice to lay in the warm protected tent and journal with the rain outside. Another great Oregon day with Jennifer!