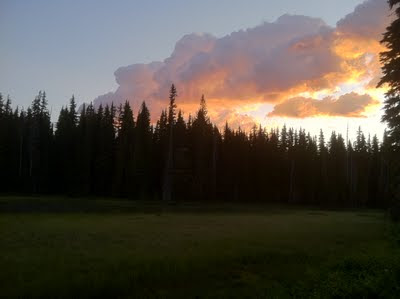 Last night, it rained and it stayed humid throughout the night, so I had a wet tent in the morning. Knowing Oregon, I wore my rain pants and rain jacket to protect me from all the wet brush I’d be walking through. Good thing I did because it was quite wet this morning and my shoes were soaked. The mosquitoes were as present as ever too. I have big welts from bites on my ears, behind my ears, and on my neck. They also seem to love my shoulders and shoulder blade area. I heard it will improve significantly in a day or two, which is good because I’m running short on deet. Despite the wet brush and mosquitoes, I was still quite excited to be in the Three Sisters Wilderness. For the first time, it was dark when I left camp at 6am. The other hikers I camped with were still sleeping when I left. I like seeing the sunrise and today it was nice with billowing clouds.
I have spent a bit of time in Three Sisters before and I was looking forward to understanding the lay of the land even more. I just loved seeing the mountains and the clouds today! 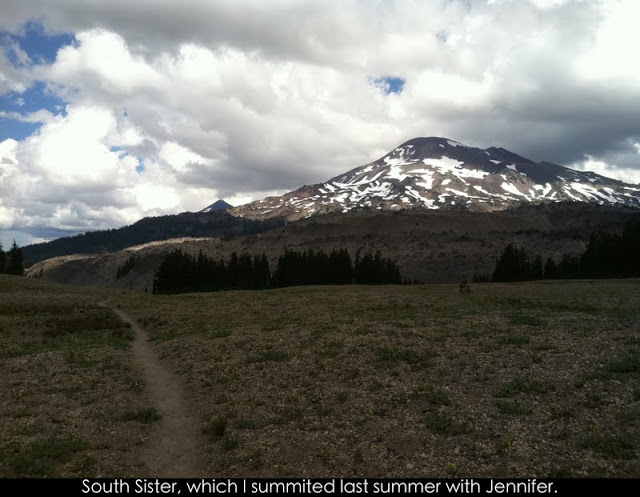 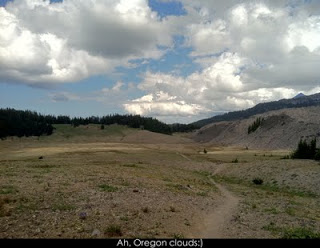 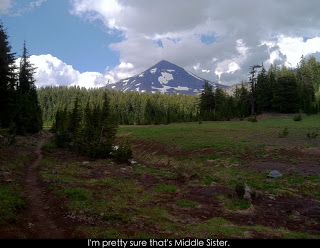 There were a lot of day hikers, backpackers, and groups of kids on the
trail today. I didn’t see any thru hikers all day, except on very
important one. I was lucky enough to meet Scott Williamson (aka, Bink)
today. Those if you who don’t know him, he is one of the most well known
PCT hikers. He holds the record for a southbound thru hike and has even
yo-yoed the trail (gone north to Canada and then turned around and gone
back south to Mexico). He is attempting to break his own record of 64
or 65 days southbounding (I think that’s right but nit sure if anyone
out there knows). I recognized him immediately as he came toward me and I
didn’t want to stop him for too long because he has a schedule to keep.
He was great and took plenty of time to stop and even take a picture. 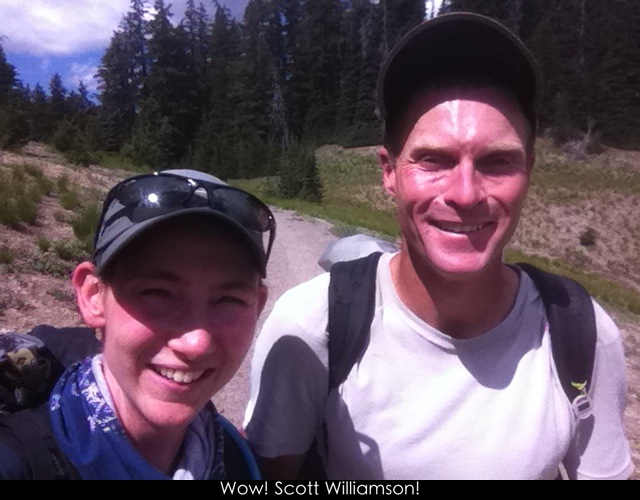 Scott knew to look for me because Liz knows him and had seen him a few hours before me because she is a half day ahead of me. He was going to play a prank on me an pretend to be a stalker, but I fortunately recognized him before he could. After he walked away, I thought of all the questions I wish I would have asked. He did say he’s just barely on track and that he was slowed by all the snow in Washington. He has a great attitude about it all and is trying to beat his record, but will be happy either way. From what he told me, it’s taken him only 17days to get here. I did the math and without zeros, that means he’s averaging just over 40mi/day. That’s amazing! Especially with all the snow he went through.

After seeing Scott, the day went by quickly. I am trying to hit 30mi more regularly and I was happy with my pace today. I had some excitement on the afternoon because I remembered that I had a friend hiking out here around this time, so I randomly asked some people also doing the Sisters loop if they had seen her. They said that they had just met her and she was just ahead of me! I pushed to catch her and was even seeing what I thought were her dog’s prints, but I never found them. That was disappointing, but it added some excitement to the end of the day. It’s such a small world out here! I stopped at a spot to camp alone around 7pm. I am excited to say it was almost mosquito free and I got to eat without a head net! While I was setting up, LaFonda and Euro Trash came by. They are on a tight schedule and still needed to go further. I will maybe leapfrog a bit with them tomorrow morning. After they passed, a man named Bob who was camped down the trail from me came over and chatted with me while I ate dinner. His sister did the trail last year with her husband who was in his 70s and was the oldest to complete the trail last year. That was cool. It’s always more reassuring for me to know I’m not camped completely alone. I was excited to eat a lasagna Mountain House that a journal follower named Mackenzie sent me. She also sent a pink superman decal that I now have on my stove container. Thanks MacKenzie! 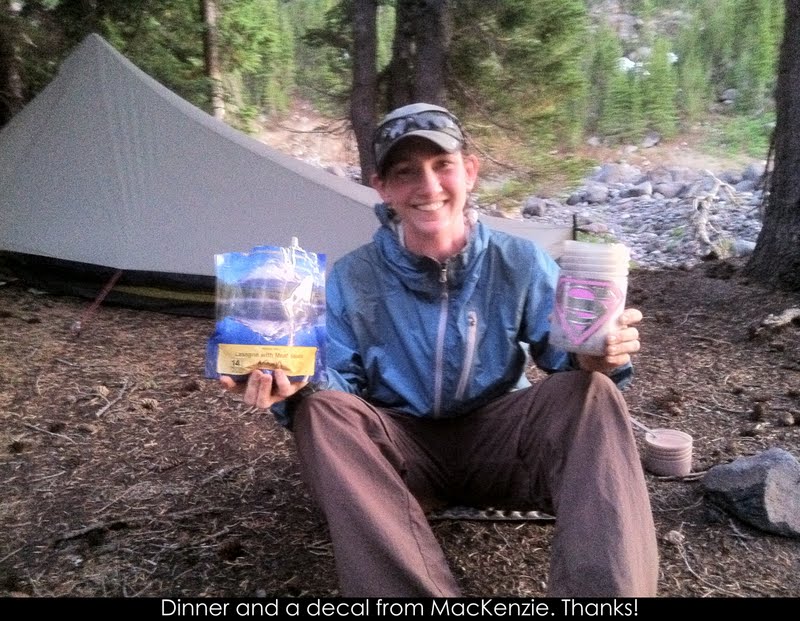 Tomorrow, I will be resupplying again with more care package surprises coming. I’m looking forward to that!