I have a long entry for today, but I need to vent, so enjoy! So far, in Washington, we have been very fortunate with the lack of rain. Even the mist yesterday was enjoyable and the hard rain has been coming overnight. It rained through the night last night and we woke to really wet tents and a steady rain. Thankfully, the temperature was not as cold as it has been. Waiting it out was not an option, so we started out into the dark morning in the rain. The trail this morning was horrible. Lots of steep uphill and so much brush that we could barely see where the trail went. 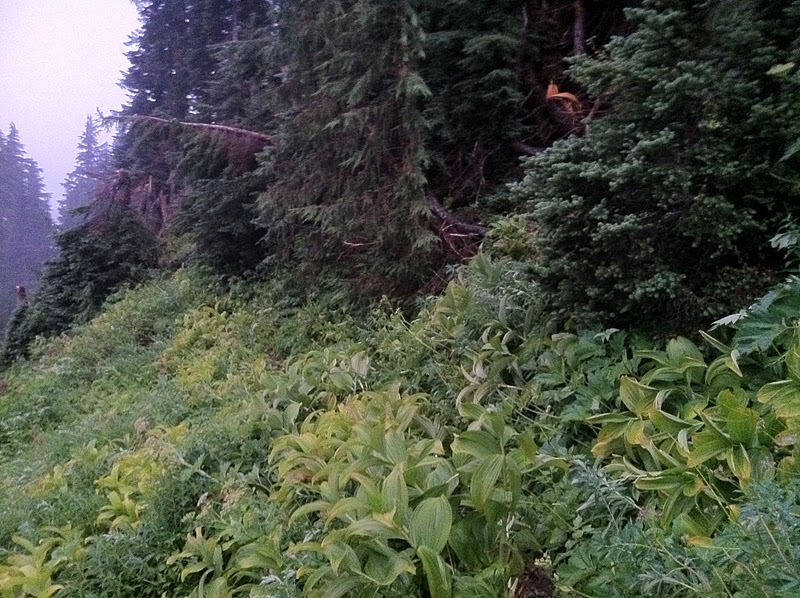 To add to the brush and the rain, the trail was muddy and slippery along a steep slope. Both Bookworm and I had instances where we slid off the side of the trail and down the steep brush. With the wetness and rain gear, I was surprised at how far and fast I slid(only a couple yards). It made me think of the slides I took in the Sierra snow. Getting back up to the trail was exhausting and slippery. We had to grab the plants to pull ourselves up. I was very cautious not to let that happen again.

As the morning went on, the discomfort set in. I was somehow getting wet too. I’ve never had a problem with my jacket or rain pants before and somehow I was getting wet. We knew we wanted to make it to a camp 29mi away, but that was quickly becoming an unattainable goal. The rain started to let up and the clouds cleared. I was excited to be able to take pictures. I took this picture with my iPhone of what had been covered by clouds. You can see the trail winding that I came up. 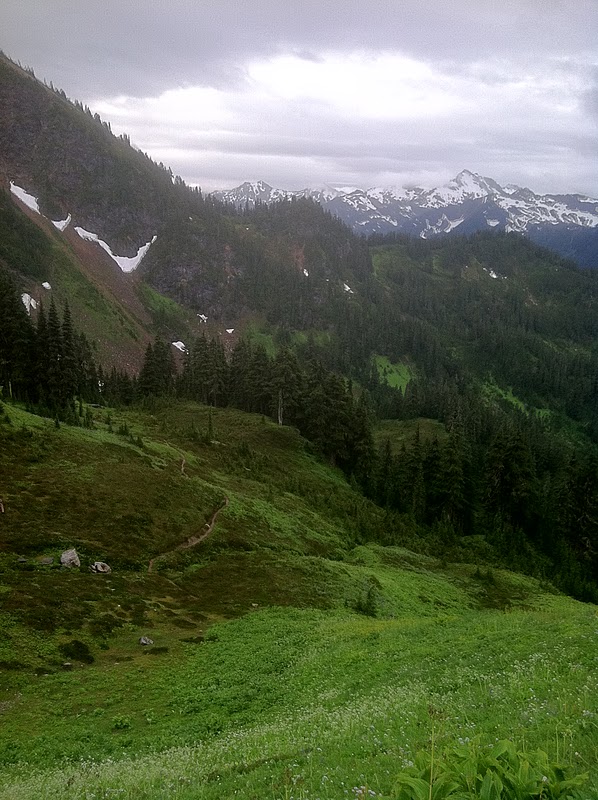 I reached into my waterproof jacket pocket to get my camera and everything in the pocket was soaked. I’ve never had any water get in there before. There was even a little puddle at the bottom of the pocket. My camera and MP3 player were in that pocket. Shit! Why didn’t I double bag them into a Ziploc!? Neither one of them worked the rest of the day. I’m so mad at myself and I’m hoping to dry them out when I get town, but there is a chance they are both ruined. I’m such an idiot!

I was frustrated and wanted to get the day done, so I pushed on ahead knowing we’d meet at lunch or the campsite. I jogged the downhill and caught up to Colin. Then we hit some killer steep switchbacks with horrible brush. The brush was really thick and soaked us. The thickness of the brush was like adding resistance on a stationary bike that was difficult to pedal in the first place. It’s important in this story for me to mention that this section was about 2mi long and it was not on any of our maps or GPS. There have been many washouts in the area so the previous trail probably doesn’t exist. I mention it because it added very difficult mileage to a day where we were already pushing to make it to our destination. I couldn’t keep pace with Colin, so I hiked to the top of the switchbacks and stopped for lunch.

The clouds were finally breaking and I was able to lay all my stuff out in the sun to dry. I also thought Yankee and Bookworm might catch up, and they did just when I was leaving. We all agreed that we weren’t going to make the miles we wanted today. The problem was that there was only camping too soon in the day and we needed to be set up to catch the evening bus to Stehekin tomorrow night. We agreed to just do what we could and that we’d camp on the trail if we got stuck between sites. The problem was that we didn’t know if the trail would have more of the insane brush. I decided to hike on and said I’d try to find a spot for all of us. As soon as I left, I noticed my iPhone was fogged up on the inside of the lens. Argh! Because of that, the rest of my pictures are foggy today. Again, I probably could have kept it drier. 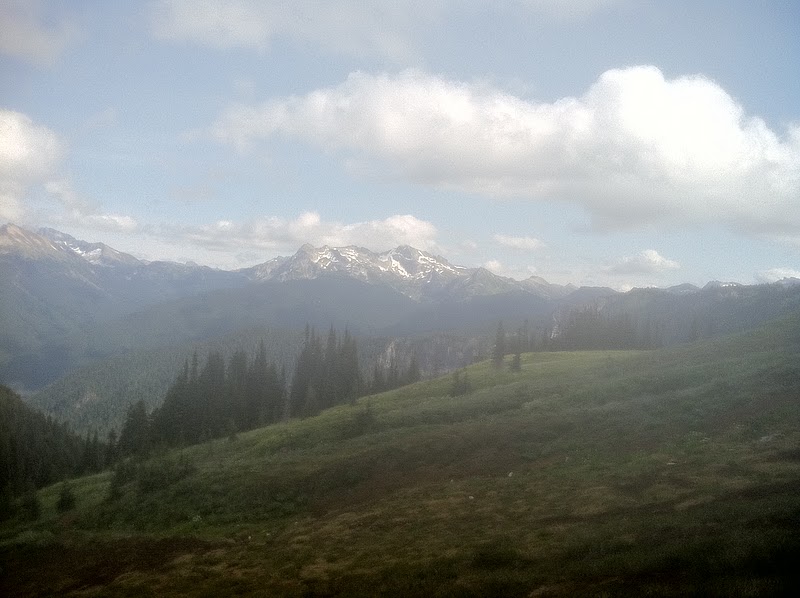 The next 5mi or so were downhill and I tried to jog some of it. After a couple hours, I took a break and really felt tired. We’ve had to push everyday on this leg and I was tired of pushing. Being wet and cold had really taken it out of me. I’ve been falling asleep journaling at night, so I sat down to wait for Yankee and Bookworm to catch up while I journaled and rested. After almost an hour, they came by and we decided to just do the major log crossing a few miles away and then make up the miles later. We came to a sign with a ribbon that said, “PCT Bridge” at our first crossing and we took it. It was taking us away from the trail and felt wrong, but since the same thing happened for a couple miles earlier in the day, we went with it. As we got further in, we started to think we had unintentionally taken a detour. Bookworm was happy because he was not looking forward to the log crossing. Yankee and I were not and couldn’t decide if we should go back. We were losing time and risking not making it to Stehekin tomorrow night. Going back could lose us even more time and we didn’t know if the first stream was able to be forded because no one mentioned a ford to us. We got to see Yankee’s full blown New York tantrum. I was used to this and appreciate it as Yankee’s passion for doing the trail as honestly as possible. He, like me, has a lot of pride in not skipping or flipping and we were on a skipping trail! He was mumbling, yelling, flailing his poles as he walked, he even said he’d seriously punch the guy in the face who put the sign there. I have to say it was quite entertaining to be in the forest, but feel like I was in New York. I would have videoed it if my camera wasn’t broken!

After almost an hour going the wrong way, Yankee and I decided to go back and try to follow the original PCT. Bookworm chose to continue on to the new bridge and just meet us tomorrow at the bus stop. We walked back to the steam crossing, and on the way stopped to do something(use the bathroom). I took off my pack and my diamond necklace that I wear everyday(and my twin sister also wears everyday) got caught on my bag and snapped off. That was it! I was so pissed at this day! I don’t cry much, but I had to hold back after all this and knowing there was still more to come! This day sucked! We got back to the sign, and after looking upclose, we saw the words “New PCT & Bridge.” Damn! Definitely not what we wanted. 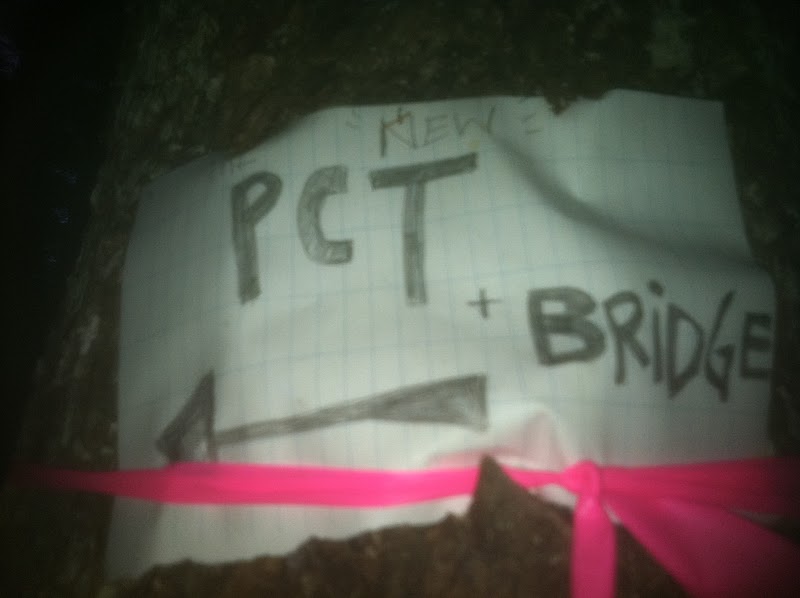 We then got to the crossing as it was getting dark and it was swift, so we went over a fallen tree. 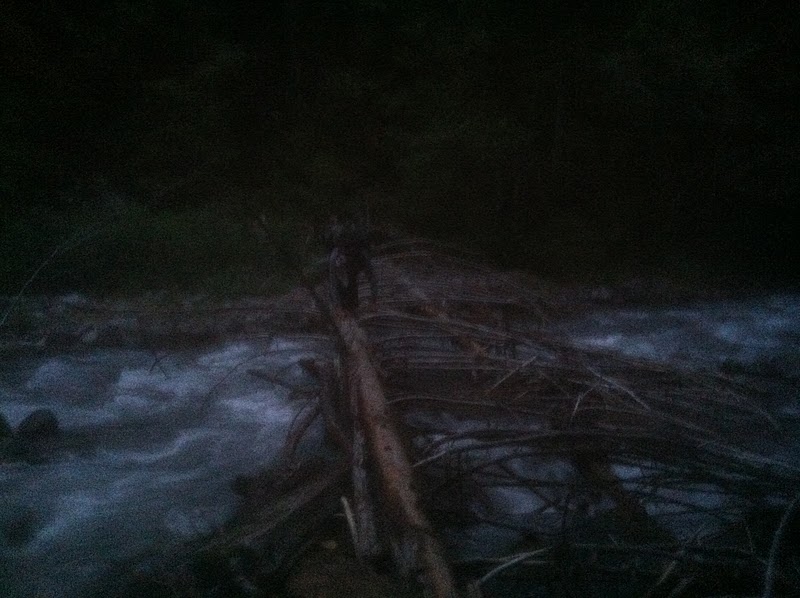 We ended up hiking into the dark and stopping 1.5mi from the log crossing. Because of this loss of time, we now have to get up early, do the terrifying log crossing as soon as it’s light enough, and push hard to do a 28mi day by 6pm for the bus to Stehekin. What a crummy day! I’m so tired!