Since coming off the trail, I’ve had a lot of fun getting in
touch with many of the hikers I met on the trail. The bonds created on the
trail are unique and when you come off, it’s a great support system for
transitioning back to the real world. Having a network and support system of
fellow hikers has been invaluable to my post hike experience. Surprisingly,
some of my strongest bonds have been with hikers I rarely hiked with or even
just briefly overlapped with. There’s a camaraderie among hikers and we all
know we have bonds that will last a lifetime. Almost all of the PCT Class of
2011 are on facebook and we’ve all friended each other.  Each year, there is a class page created on
facebook and I recommend joining it. It can be difficult to find, but it’s
there. Seeing their photos and hearing their stories have added a whole new
chapter to my PCT experience and I thought I’d share some from those I hiked
with along the way.

I hiked with Top Shelf for 53 days. He was the person I probably spent the most time with on the trail. We separated after Vermillion Valley Ranch, and he ended up finishing two days
before me on Sept 21st with a large group of young guys. As you can
see in the picture below, he finally got that true mountain man’s beard! 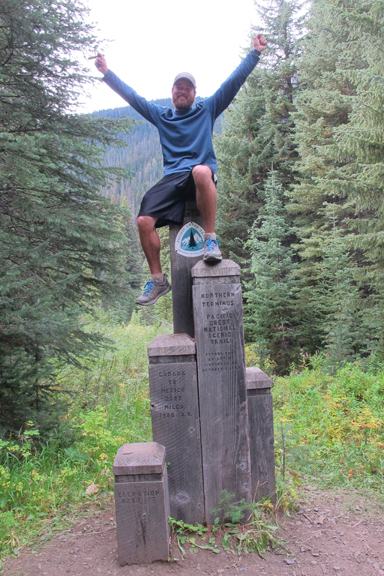 I overlapped with Free Range quite a bit through California.
She has a brief section to someday complete from Etna to Ashland, and did an
amazing job, finishing on Oct 3rd. I was on the phone with her the other day
while she was unpacking random boxes at home. We were discussing my temptation
to do the CDT, along with many of the Class of 2011, who are planning the CDT
in 2013. At that exact moment, Free Range unfolded a bandanna from a box and it
was a random CDT bandanna! It includes the CDT slogan, “Embrace the Brutality.” If that’s not a sign, I don’t know what would be! She
immediately took my address and the bandanna will be in my possession very
soon…it might be just the motivator I need…Even though it’s fuzzy, I love her finishing photo! 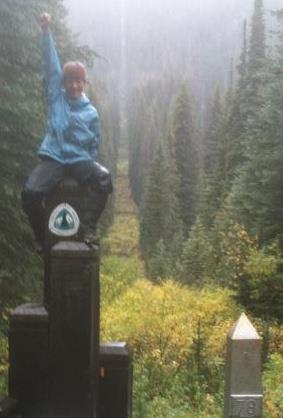 I made an attempt to finish with Balls and Sunshine, but our
schedules were just off from one another. They ended up doing a 36mi day to
make it to the monument the day after me on Sept 24th. On their way
home, they stopped in Oregon to complete the short section they had missed due
to a fire detour to make it official that Sunshine is officially the youngest
(11yrs old) to do a complete thru hike of the PCT. Next year, they plan to do
the AT and then the CDT in 2013(another reason for me to aim for that year). Since they live so close to me, we already have plans to go hiking in
the gorge later this month. 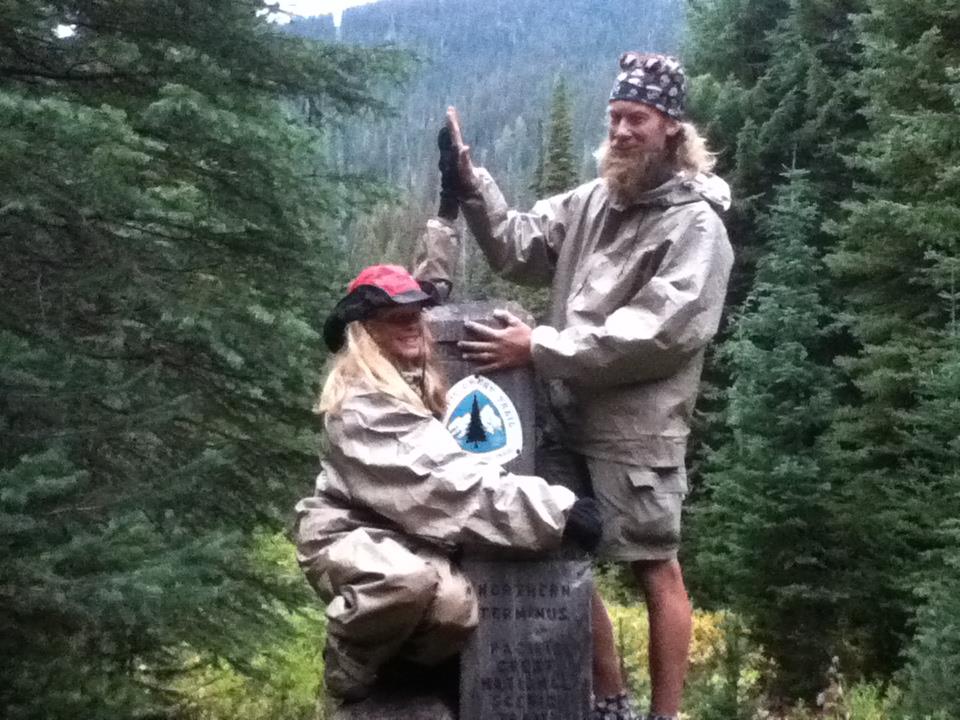 As many of you know, I struggled with the decision to move
on rather than wait a day or two to possibly hike and/or finish with my friends
just behind me. It turns out that just two days after I finished, the snow hit
Washington! My friends Liz, Funyan, and Meow Meow(who I was really bummed not
to finish with), were right in the thick of it. I’ve talked with Liz, and like
many hikers, they had some harrowing days toward the end. She joked that she
was glad I didn’t wait for them because they were in a snowstorm for two days and never would have heard the end of
it from me.

I was slightly
perplexed because we were only one day away from each other entering Washington
and they just kept falling further and further behind. We all really wanted to
finish together and I couldn’t figure out why they weren’t doing more miles.
They ended up finishing five days after me on Sept 28th and I
couldn’t imagine how that was possible. Well, there is quite a story there…I
can think of no other way to explain it than to show you the picture Liz sent
me with the title, “Why we were delayed…”

Meow Meow and Funyan are going to have a little PCT baby!
Without going into detail, I can say that this was a HUGE surprise! This little
one overcame more obstacles to be conceived than we had on our whole trip. This
is going to be quite a determined little kid, and they better name it Liz if
it’s a girl! They didn’t find out until a third of the way through Washington,
so needless to say, some delays were necessary and mileage was suddenly
reduced. By the time they finished, Meow Meow was already two months pregnant. So awesome!

Hearing Liz describe their final weeks was really great.
They got to meet and hike with many of the hikers that we had been just ahead
of the whole time. Even though the weather was grueling, they had some amazing
experiences and stories of human kindness. At quite possibly their lowest
point, they were welcomed into a guard station for hours after the guard had
already packed to go home for the season. I’ve heard stories just like this
from many other hikers who were in the roughest weather at the end and it was great to know there were people there to take care of them.

Last, but not least, I was very excited to hear that Wandering Dot was able to complete her thru hike. I had last talked with her when I was halfway through Washington. She was at Mt Hood where smoke from forest fires were causing detours and challenging conditions. I was so happy to hear from her this week when she got done. She had some rain and snow experiences, but had other hikers around her and they managed to get through to the monument on Oct 10th. I so admire her persistence and endurance. You did it Dot!

I hope you all enjoyed seeing these photos as much as I did. I’ve heard from many hikers and every story is so unique. I love how everyone’s finishing photo fits their personality.