May 11th
The Thomas’s(333.9)-Hwy 117/El Malpais(363.4)
29.5mi
I slept in a bit after being up late last night and started from the Thomas’s at 8am. My goal was to do about 25mi. My friend and fellow PCT 2011er, Wandering Dot is 50mi away doing trail magic for two more nights. The goal is to average 25mi today and tomorrow so I can camp with Wandering Dot tomorrow night. I like these kinds if goals to keep me motivated. The majority of the day today was straight forward and easy. The first half of the day was continuing the road walk. Temps were nice in the upper 50s/lower 60s and it was windy, but there wasn’t any rain! I worried as the clouds gathered quickly halfway through the morning that the thunderstorms were returning, but other than a sprinkle or two at lunch, it thankfully remained clear.

The whole time I had a direct view of Mt Taylor. The 11,000+ft mountain I’ll be atop in the near future! 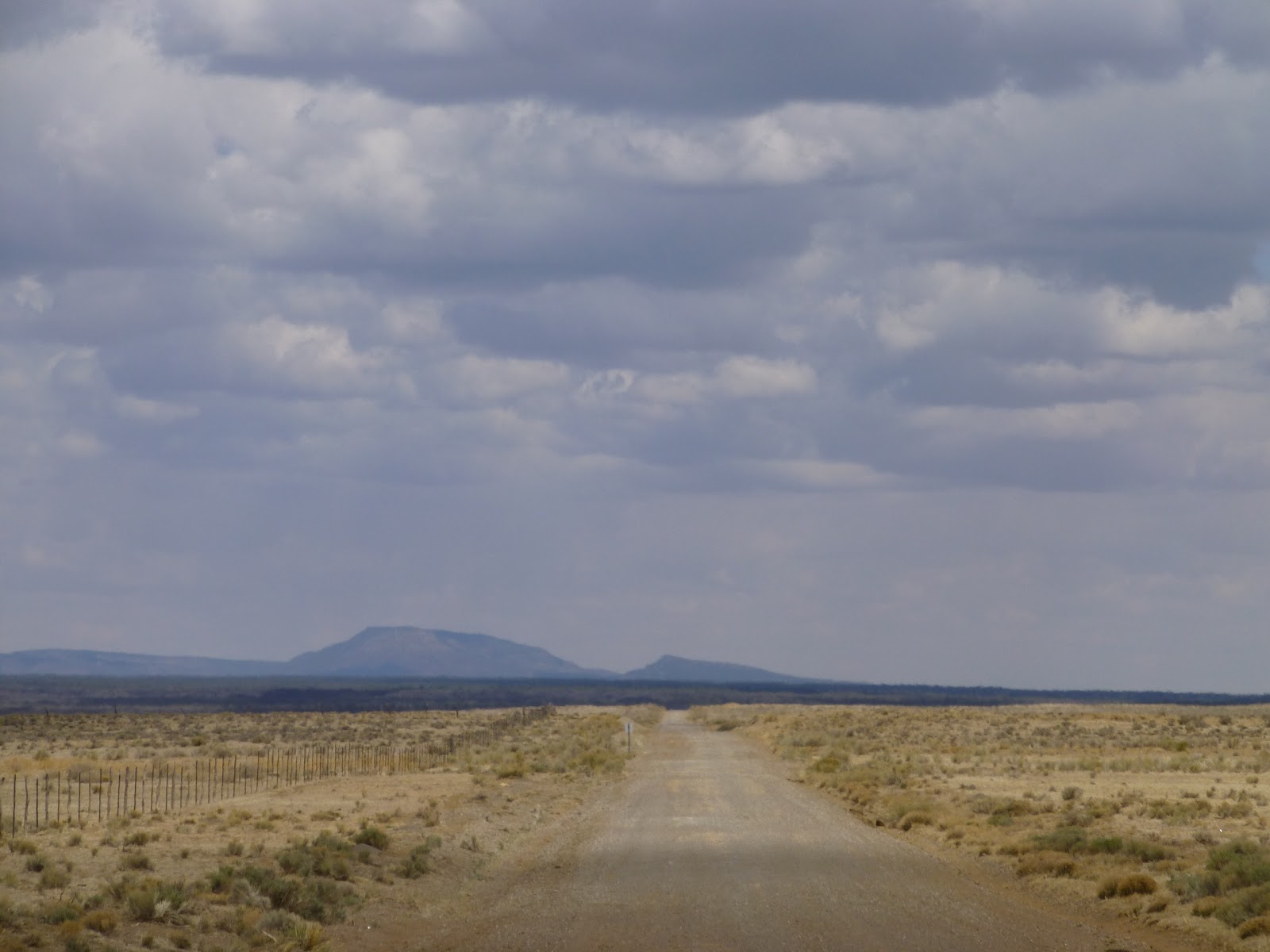 Right at my lunchtime, I came off the road and into a wilderness area with two different little canyons I’d get to walk through for the afternoon. As I started lunch, I noticed a couple was finishing their day hike and I introduced myself and talked with them as we ate our lunches. Their names were Jane and Micheal and as coincidence would have it, they live in Oregon! They are both retired from teaching professions and both worked in a school district I sub for near Portland. Such a fun coincidence and small world! It was nice to have some company at lunch and they were able to top off my water supply for the day, so thank you Jane and Michael! 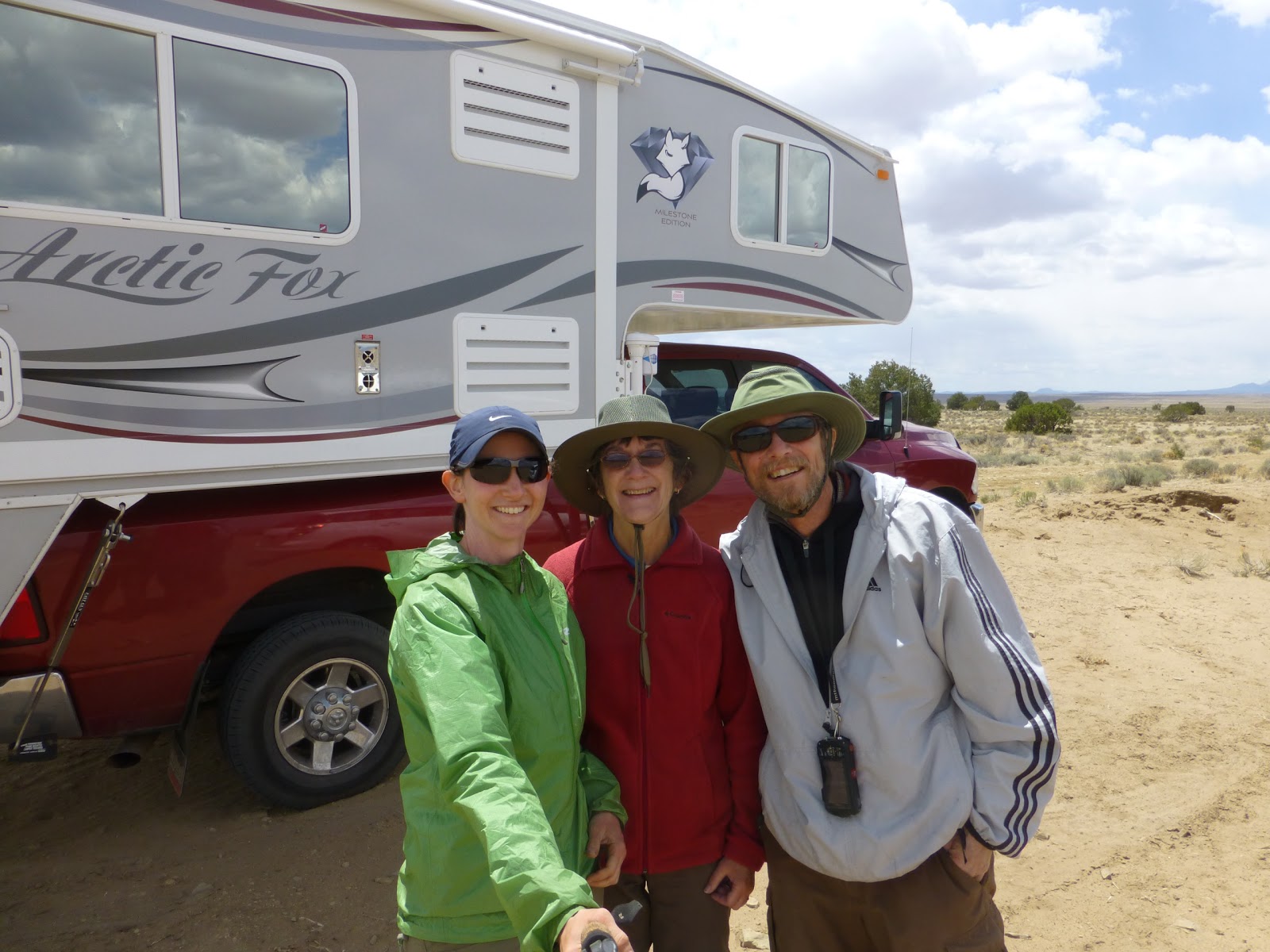 Jane and Michael had hiked a different section of the small canyon that had ancient ruins still there. My route said I would see evidence of an ancient pueblo, but all I saw was more of a shack and I think I missed it…I was looking, but wasn’t quite sure exactly where to look and what to look for. The canyons were small and I couldn’t help feeling that I was under appreciating them after recently being in the Gila and having that impression of a canyon. There were some nice rock formations at times along the rim of the canyons. 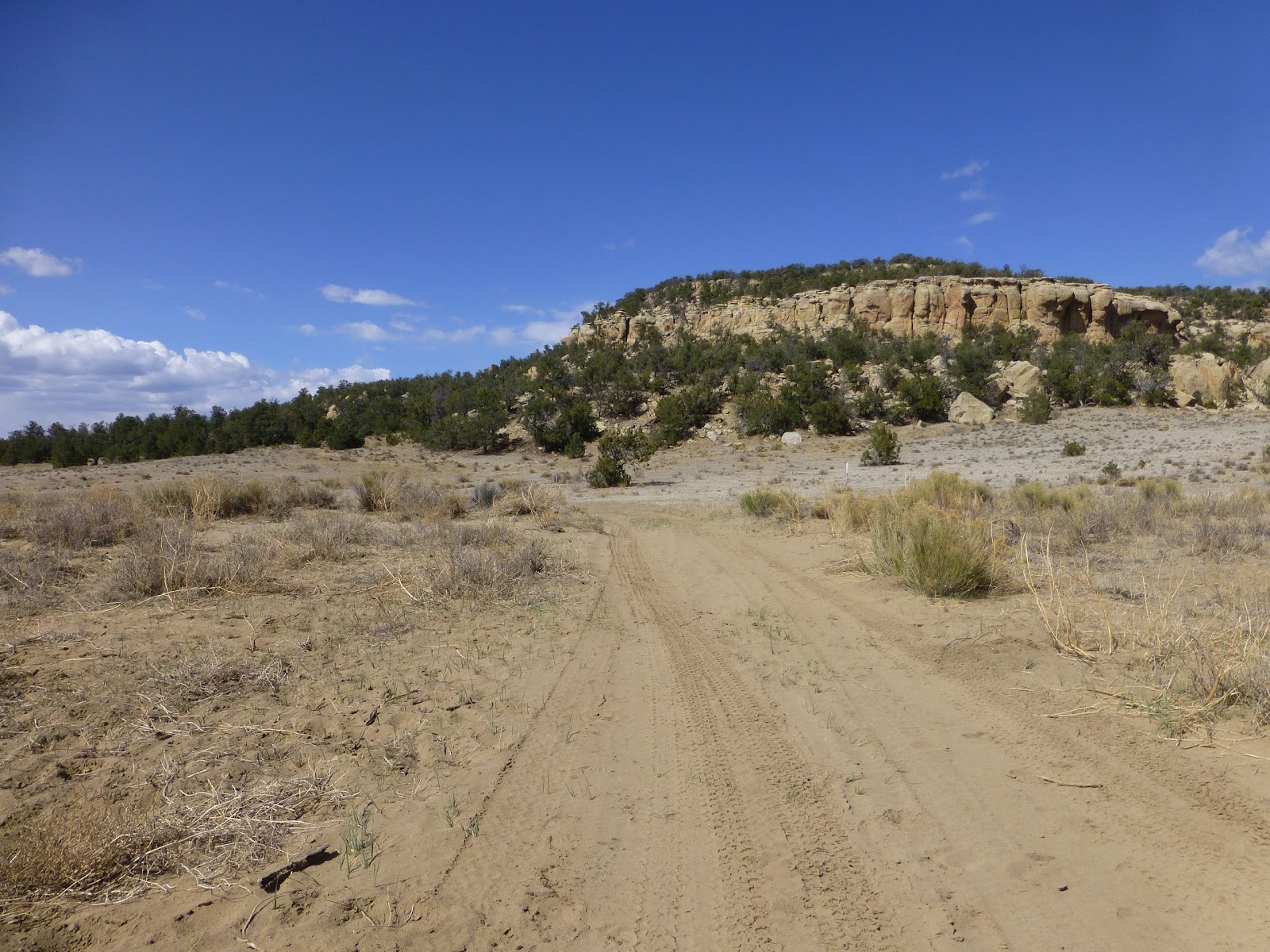 The second canyon was called Sand Canyon and it was just that. My legs definitely felt the difference after so much walking on a packed dirt road and then in varying depths of sand. 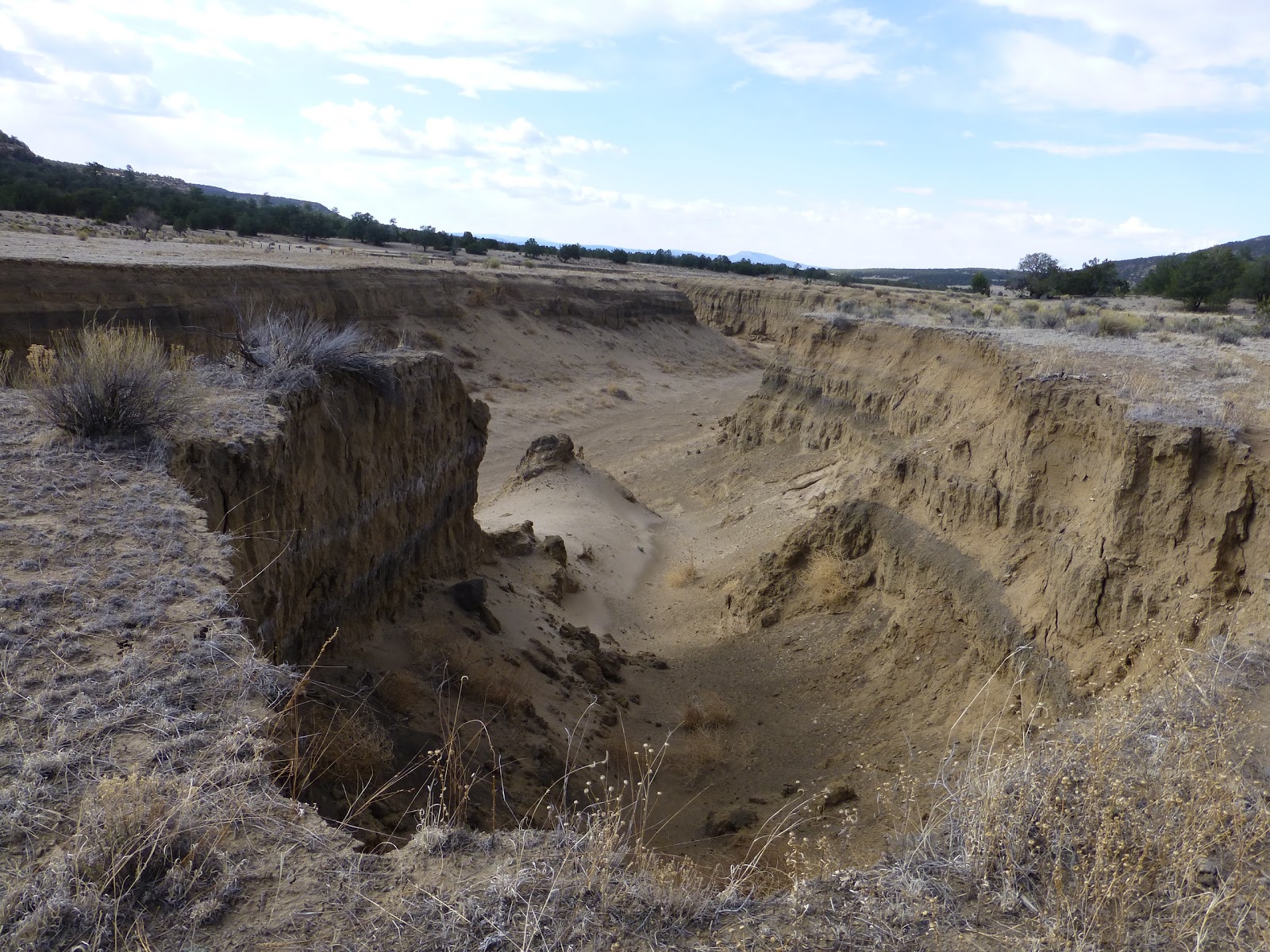 With a couple hours of hiking left in the day to meet my 25mi goal, I had another hiccup with the waypoints on my GPS…the Johnathan Let maps are very general and basically show that you need to just follow the canyon. It was too general to see any details other than that. The waypoints on the GPS had a specific spot where they cross over to the other side of the small canyon. I figured there would be an obvious crossing…nope…I was stuck on the wrong side and just had to walk a bit further down before finding my own crossing. When I finally got to the other side, I had to cross country a bit to get back on track to the old dirt road I was to follow to the highway. My goal mileage landed me right near the highway 117 crossing, so my eyes were looking to camp in a sheltered area near the highway crossing. South of the highway, it was very barren with no wind protection and I had a couple threatening stare downs from some very territorial cows. I wanted to camp on the north side of the highway. The highway crossing was right at the edge of two connecting maps and I failed to look at them close enough to realize that what I thought was a 4.4mi continuation of the dirt road I was on was really a paved highway walk. Not what hiker feet need at the end of a day! That also meant that what I expected to be open land for possible camping was barbed wired property right off the highway with little protection and even less anonymity. Ugh! I ended up adding an hour of paved road walking/jogging to the end of my day as there was nowhere reasonable to camp and the sun was dropping quickly. My feet, which thought they were done for the day, were not happy with the pavement. After 3mi, I finally decided to give in and crawl under the barbed wire fence when I saw a spot that was fairly sheltered from possible wind and hidden from the highway. Not a fun way to end a day. I guess these are all things I’m learning and now I’ll pay better attention to the details. I’m just glad I buffer extra time at the end of the day for these little hiccups. I almost got my first 30mi day today, but it didn’t really feel like it was that many miles…the mileage I report on these posts are taken directly from the maps, which are not exact. Sometimes we feel like the mileage was more or less, but I think it all evens out in the end. There are many days when I’ve felt I’ve hiked more miles than the map calculates, so I’ll take the 29.5 for today and consider it even!
On the positive side, I’m now that much closer to seeing Wandering Dot at camp tomorrow night! I’m sleeping in tomorrow. Good night! 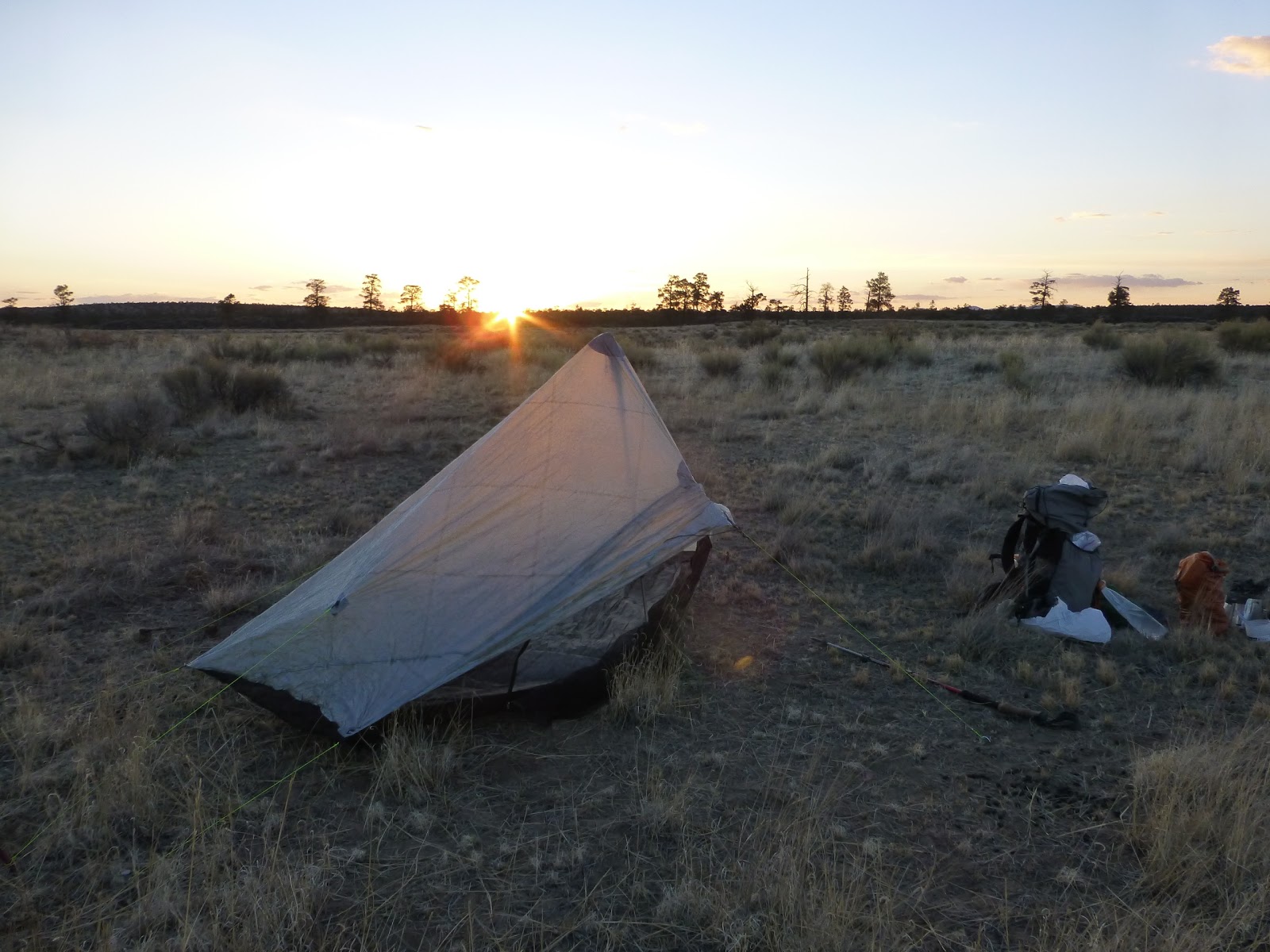