Day 23: Back On Trail With The Group

May 15th
Grants, NM(400.6)-Mt. Taylor (419.2)
19.2mi
Today was a slow start getting out of Grants. I decided to head out with the group knowing that the final destination for the day was preset and only about 19mi away. We knew we wanted to camp just before the summit of Mt Taylor. It would not have been enjoyable to leave town and summit the mountain all in one day. The plan was to meet at McDonalds because we all ended there and the hike continues right through town on an 8mi pavement walk. The group, Love Note, Strider, Drop-N-Roll, Ninja, and Sweetfish were able to get a ride from trail angels, Carole and Hugo Mumm. The Mumms also offered to slack pack us for the 8mi road walk through town. Slack Packing is when you either don’t carry your pack or carry just a few things you’d need to complete a section where your pack will be waiting for you on the other side. Everyone chose to do that, but I’ve never been comfortable with slack packing, so I wore my fully loaded pack for the road walk through town. Many hikers like to slack pack for good reason, but I just like to know I carried my own things myself from Mexico to Canada. Here is the group walking through Grants. 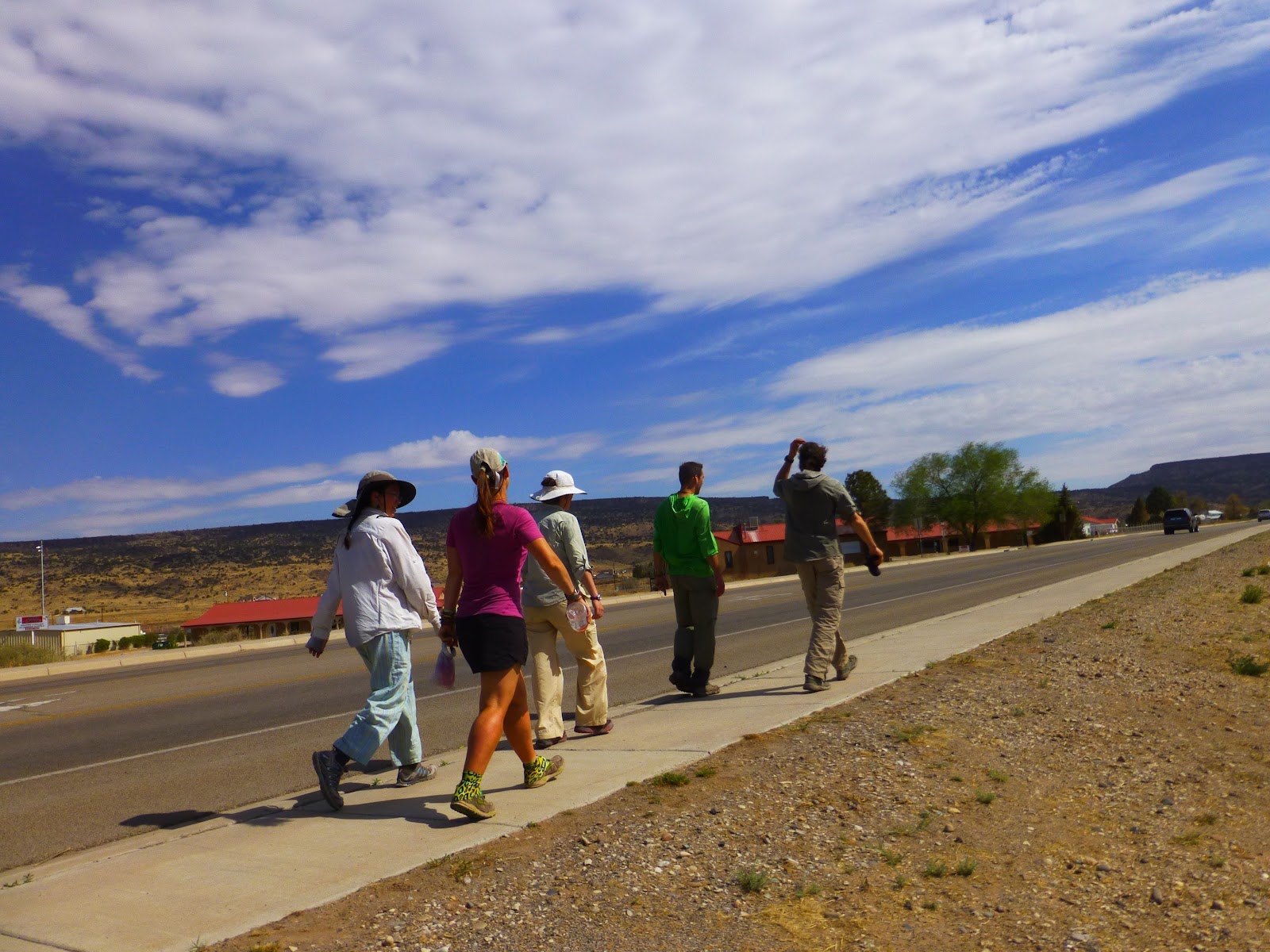 We didn’t get walking until 9:30am because of all the shuttling the Mumms needed to do. We had planned for 8am, so I got to wait at McDonalds and watch Hulu on their awesome wifi. This delayed start would normally frustrate me, but with the low mileage today, we had plenty of time. Part of being with a group. You’ll notice in the picture above that Ninja has changed from her skirt to what looks like pajama bottoms. She went to the doctor in Grants because she is developing many odd red welts on her legs….possibly from the sun. She has some medicine for it and was advised to wear pants until it gets better, so those pants are ones the Mumms had for her. Once we got through town, the Mumms met us to bring everyone their packs. We all got a picture together with the Mumms before we headed out. THANK YOU to the Mumms for all you do! 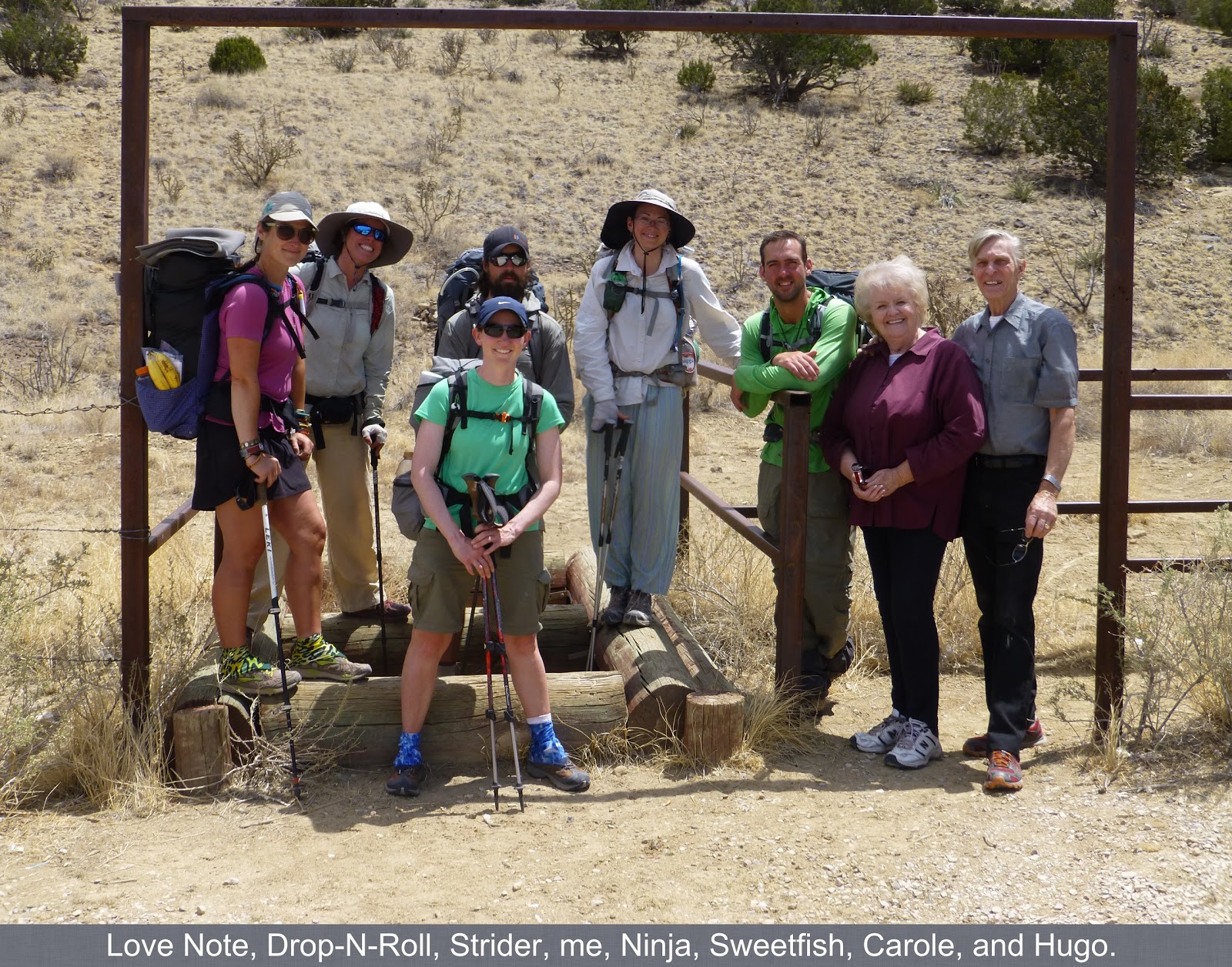 The walk up Mt Taylor was nice and gradual. There was a nice view looking back down at Grants. It was so great to be off a road and on an actual trail! 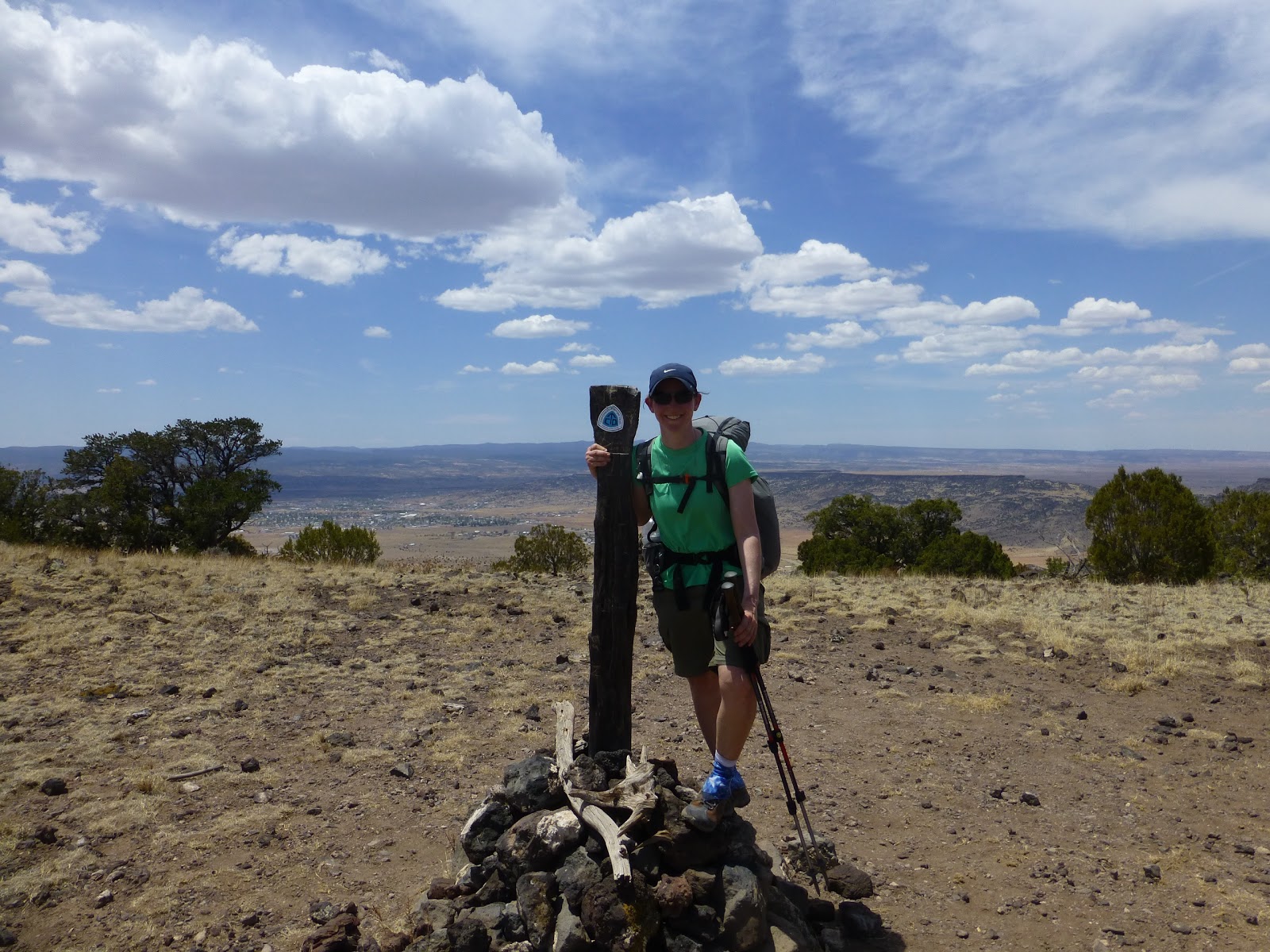 Here is the view of Mt Taylor as we headed up. 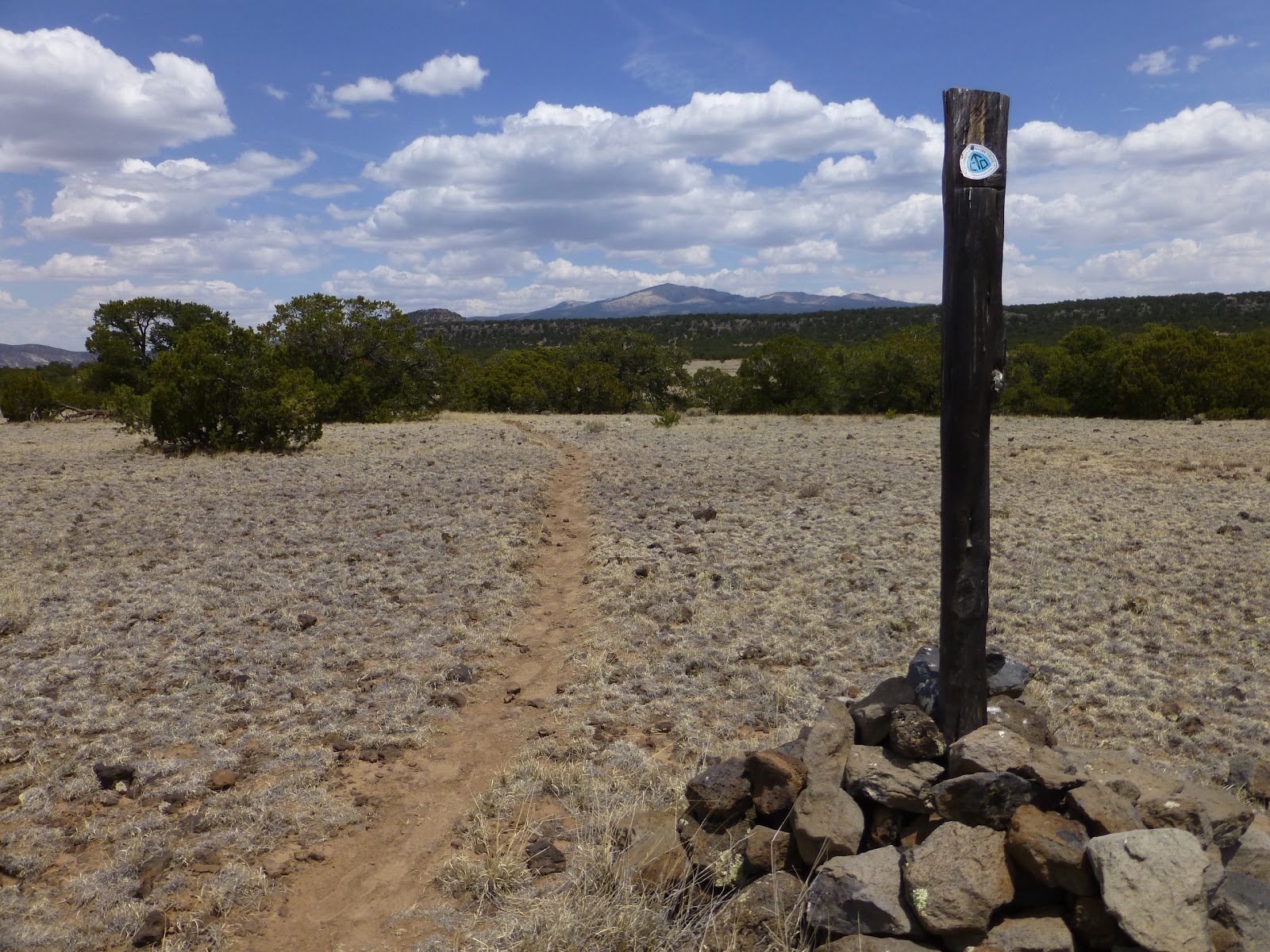 The main goal of the day was to make it to the Mumm’s water cache to stock up on water before camping at the end of the day. Our next water source is another 12mi after the Mumm’s cache. Ninja and Drop-N-Roll were ahead of the rest of us and ended up hiking right past the hidden cache without noticing it. The maps had it listed at a different location, but the Mumms told us all where to find it at the fork before the one identified on the map. The cache was camouflaged well with a pile of rocks around it, so it was easy to miss. To make a long story short, the rest of us arrived at the cache to realize that Drop-N-Roll and Ninja had missed the cache. We all took extra water for them and then split up to form a circle incase the two decided to backtrack a different way. We tracked them down and brought them enough water to make it to the next source. They apologized because the whole thing lost us a chunk of time at the end of the day. Just part of the group thing again. I was surprisingly okay with it as it was an easy mistake to make and it still didn’t affect our mileage for the day. We just ended up camping later than I would have liked. Also, the group chose a more exposed and windy area if camo for the view. I would have chosen a site in the trees where it is warmer, but that’s just part of being back with the group. We are currently camped at 9,900ft and the summit is 11,301ft. There were some great Aspen we walked through just before camp. 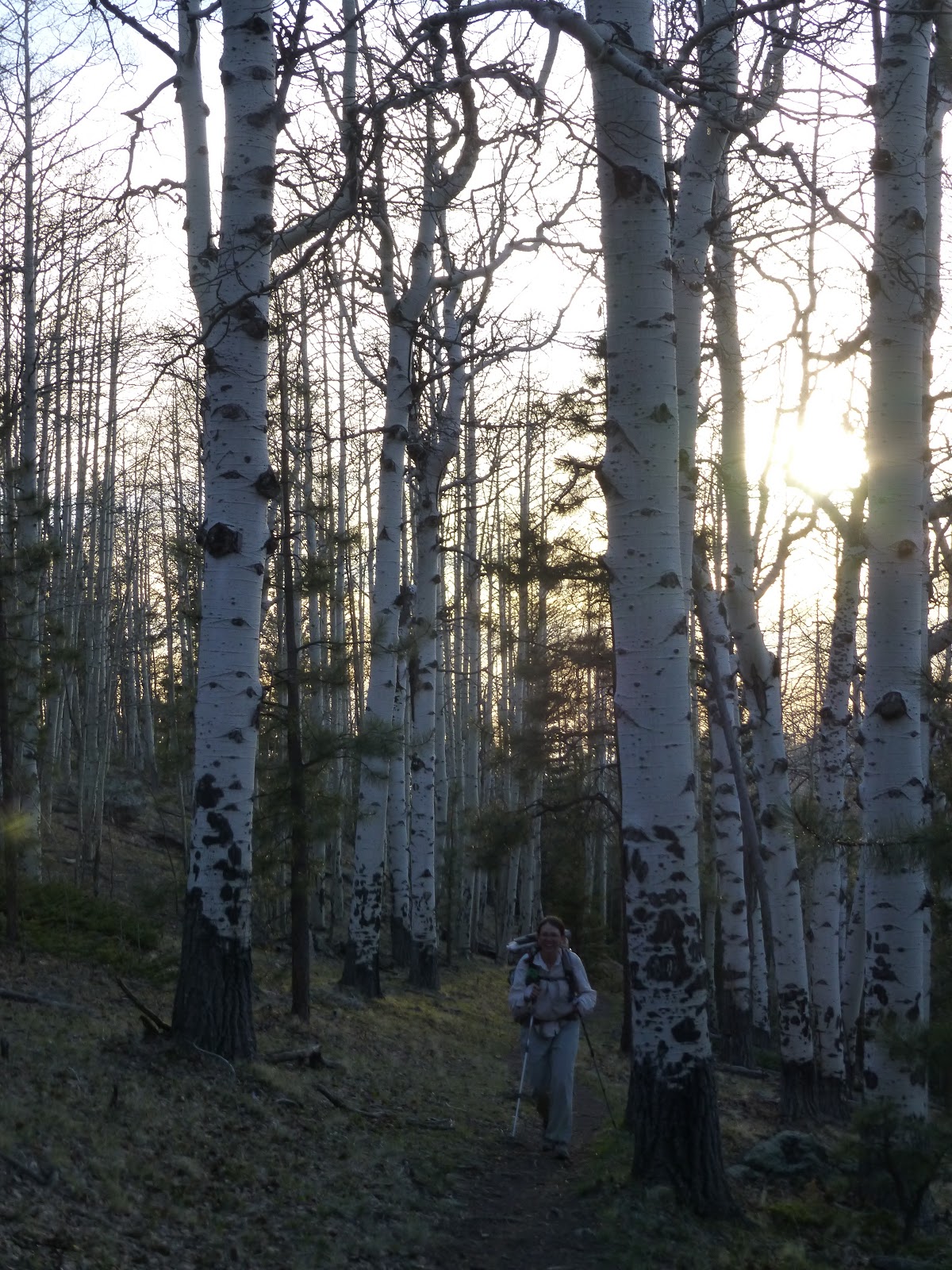 Here is the view with the summit behind us. I think we have about 2mi and 1,500ft to get up there tomorrow morning. 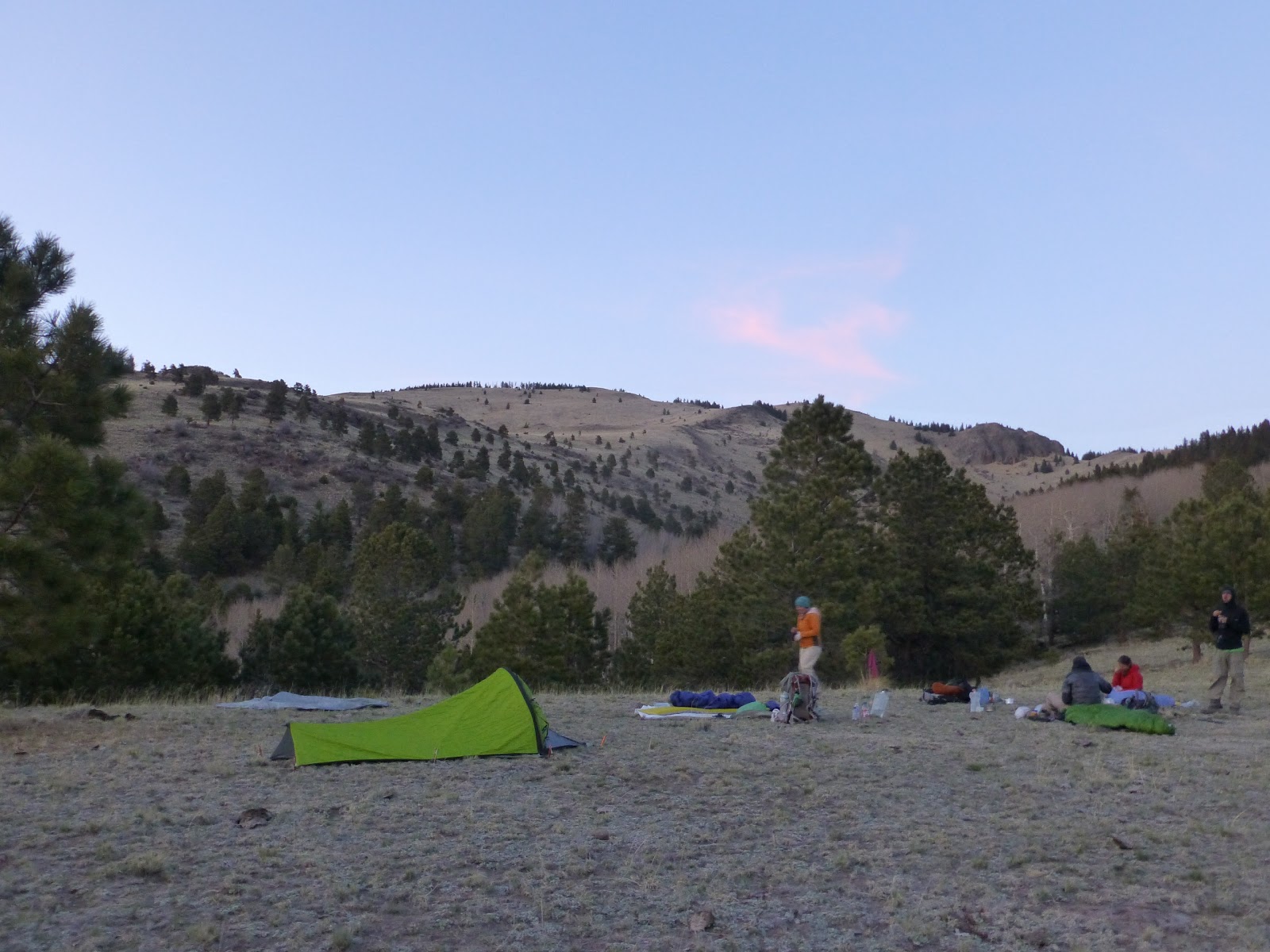 And the sunset as we ate dinner was great! 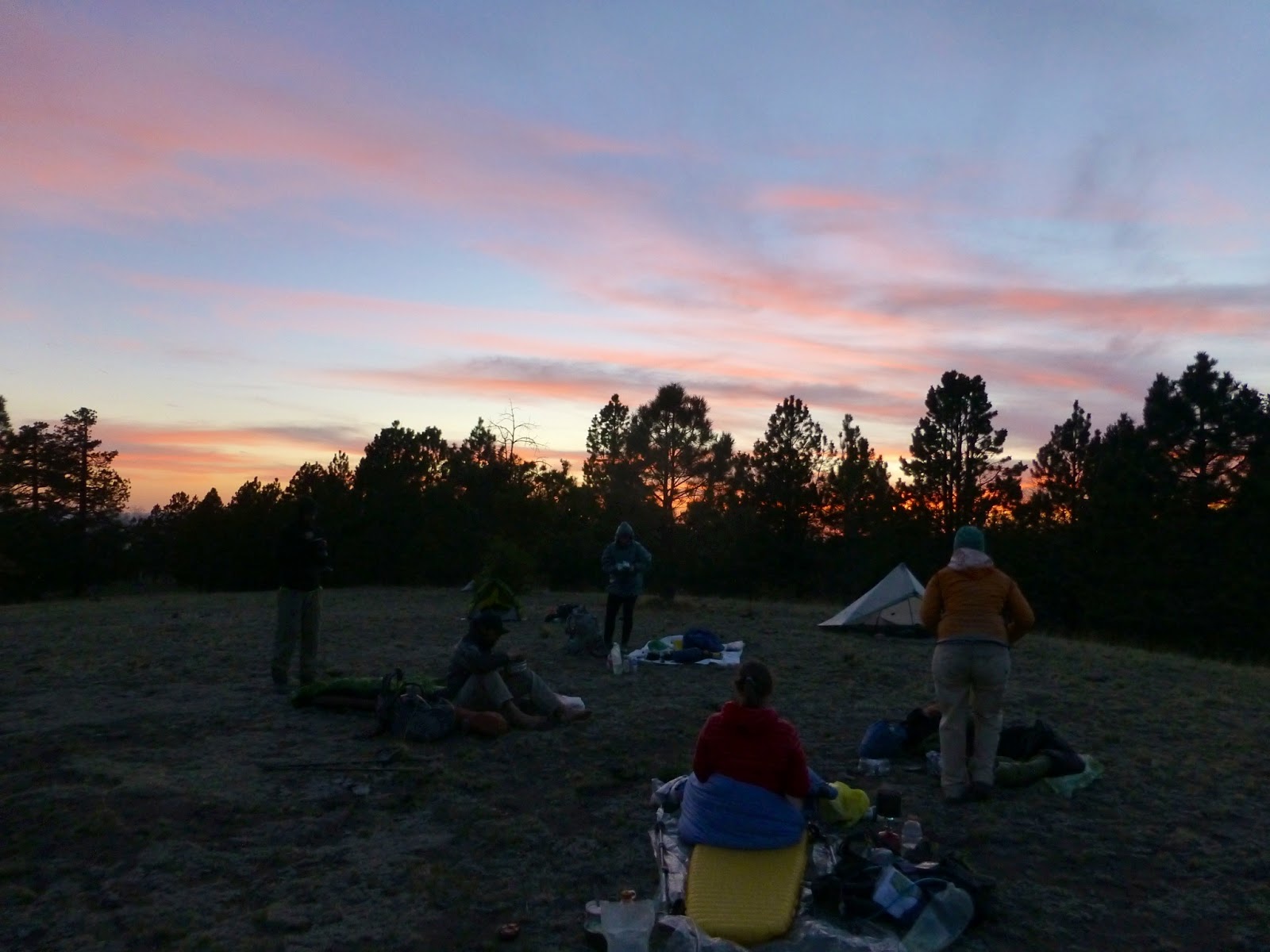 It was an interesting day and it is nice to be back with the group. I’m trying to relax and not let the timing stuff get to me. There is no rush on this leg. Balls and Sunshine took the official route that parallels this one, but doesn’t summit the popular alternate of Mt Taylor. We will rejoin the CDT tomorrow and see if we can reconnect with them later this leg.