May 25th
Cano Canyon/SR-110(583.2)-Lake Hopewell Campground(608.1)
Camp Elevation: 9,833ft
24.9mi
One of my favorite things about thru hiking is that no two days are the same and there is no way to predict how each day will unfold. Today started off pretty mundane and ended wonderfully! I woke up pretty groggy having slept very little through the night. It was COLD (32 degrees in my tent) this morning and still kinda damp in the air, but somehow my tent was dry. I hadn’t slept well because of many things. The full moon was really bright, there was an annoying cold, damp, draft that consistently blew in, and also because I kept having bad dreams and jolting up many times through the night. Odd dreams like an animal at my tent, dreaming I’d overslept, or that I had awoken somewhere and had no idea where I was. Later in the morning, Stryder asked if anyone else had bad dreams and it turned out that he and Sweetfish did too. We think there was something odd about that campsite that made us have bad dreams. Right as we were ready to leave camp at about 6:45am, we saw the couple M & NM aka MNM. They are in a picture I posted from Ghost Ranch and I keep forgetting to mention them. We have overlapped with MNM almost daily for about a week now. They are hiking New Mexico in a unique way. They have two cars and they have found a way to park cars so they can day hike or sometimes take a couple days to southbound a section. Then they sleep in their car and drive it further north to then southbound again to the other car to spend the night. It’s very unique and the result is that they are southbounding almost identically the sections we are hiking north and we see each other once a day. It’s become fun to see them each day, but they are almost done with New Mexico and will head up to Wyoming to do the same up there because they’ve done the Colorado section in the past. I just thought I’d mention it because of how unique it is and I wanted to show how there are various ways to hike the trail.
Back to today, we started out and had a gradual uphill the first half of the day. I think the highest we got was around 10,400ft at one point. I was very dizzy and my head was just spinning. Not nauseous, but similar to the feeling you get when you lean back in a swing and bring your head back up quickly and you are spinning a bit and unsteady. It was annoying, but I know I’ll adjust the more we are at high elevation. As for the trail, it was fairly bland this morning and we spent most of the morning hiking on dirt forest roads. Nothing very eventful as it pretty much looked like this for a few hours. 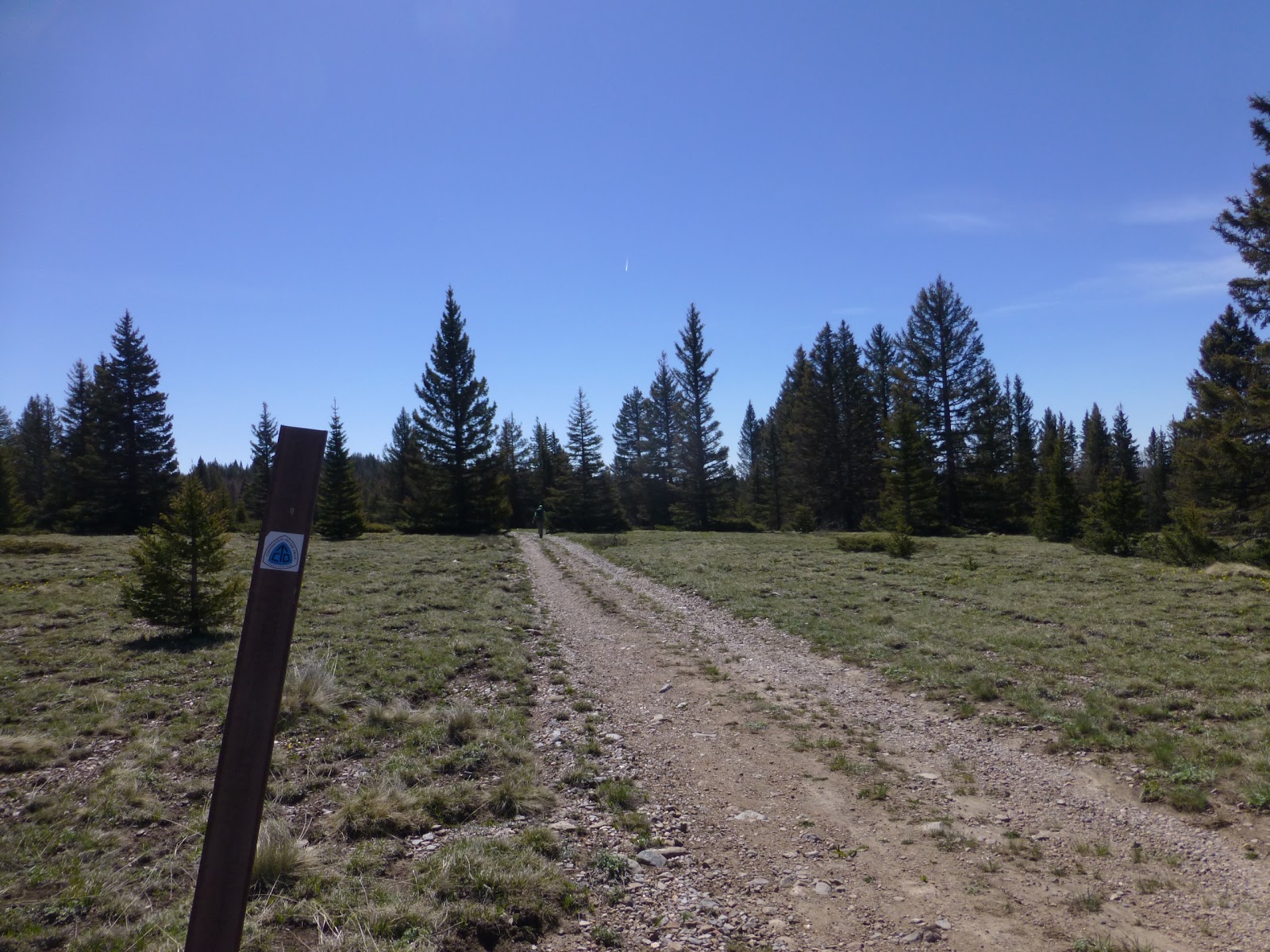 There were some new little yellow lilies that added some color throughout the morning. 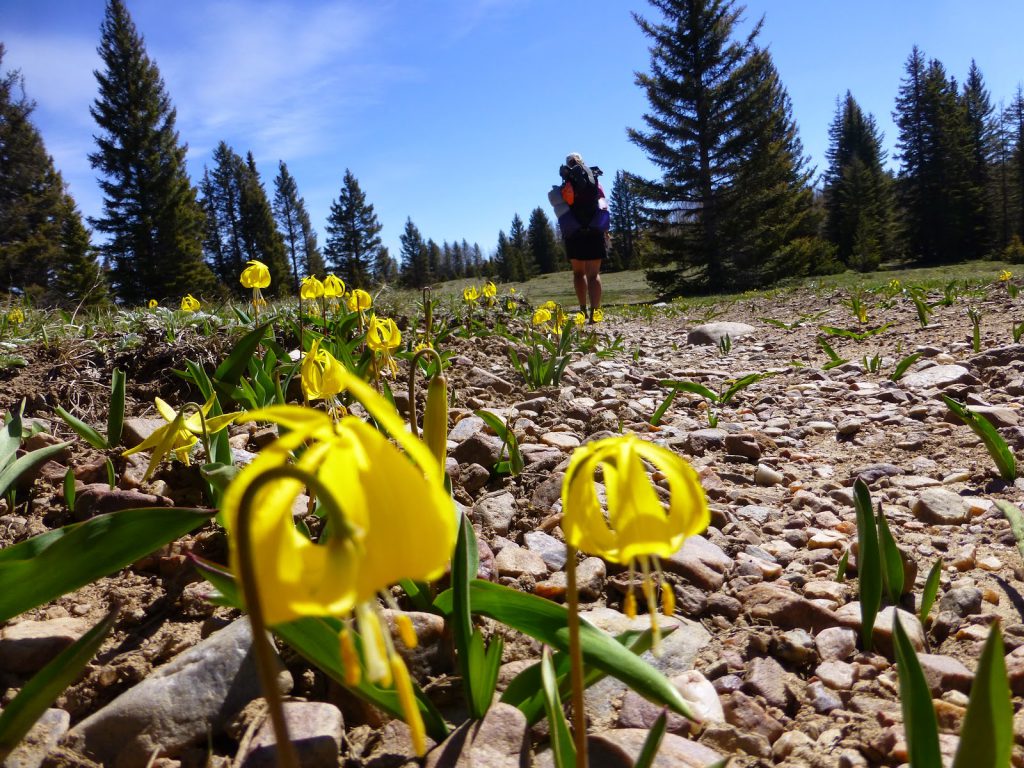 We could see the San Juan Mtns that we are headed to faintly in the distance and could see some snow at the top, but they are not fully white capped, so there is hope that it’s melting fast! 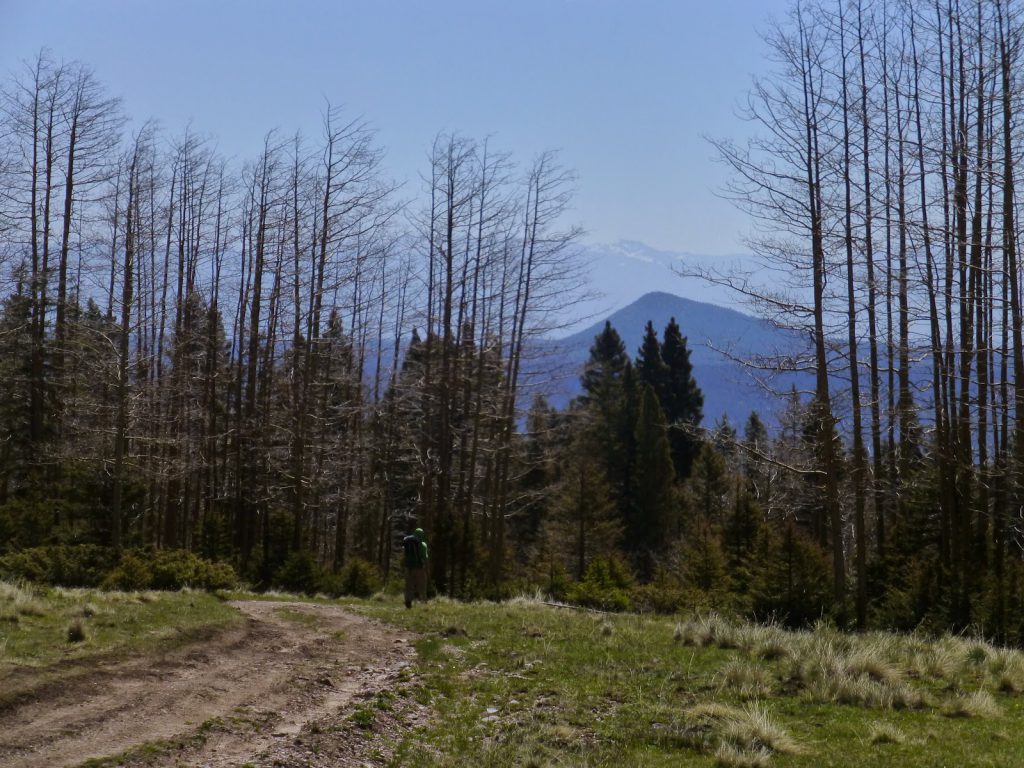 After lunch, we came off the roads for a bit and had actual blazed CDT trail. We got to a log crossing that was long and the log was crooked. Here are pictures of Ninja and LoveNote crossing the log that I straddled and scooted across because there was no way I’d make it across that crooked log with my fear of log crossings and weak ankles! 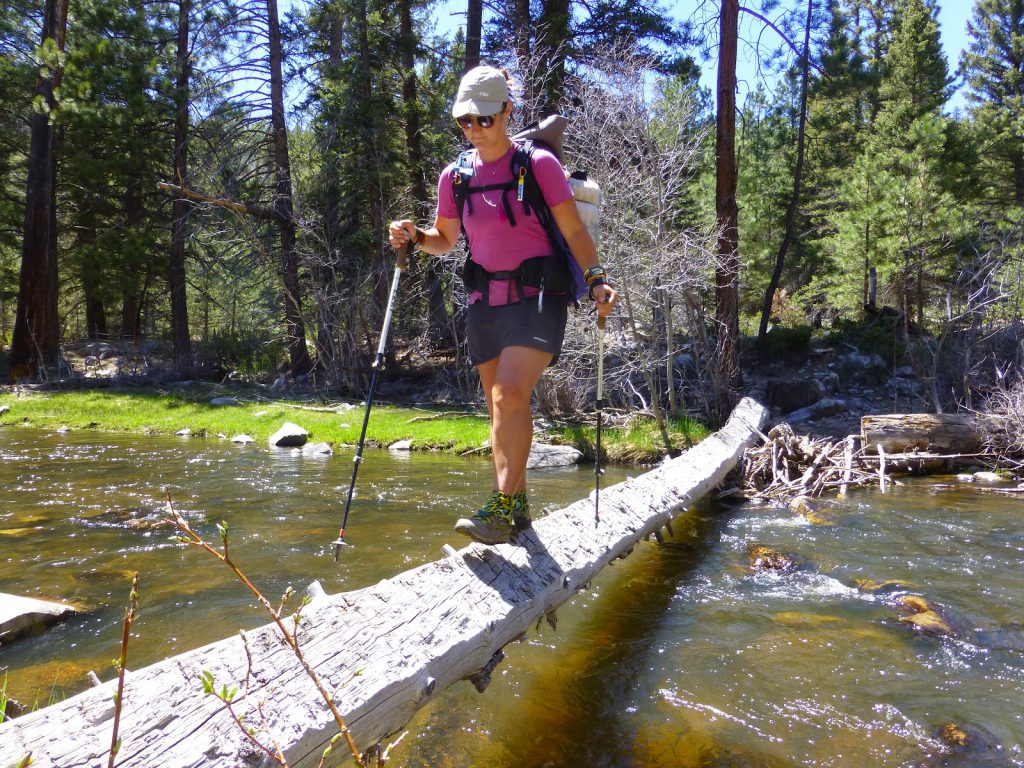 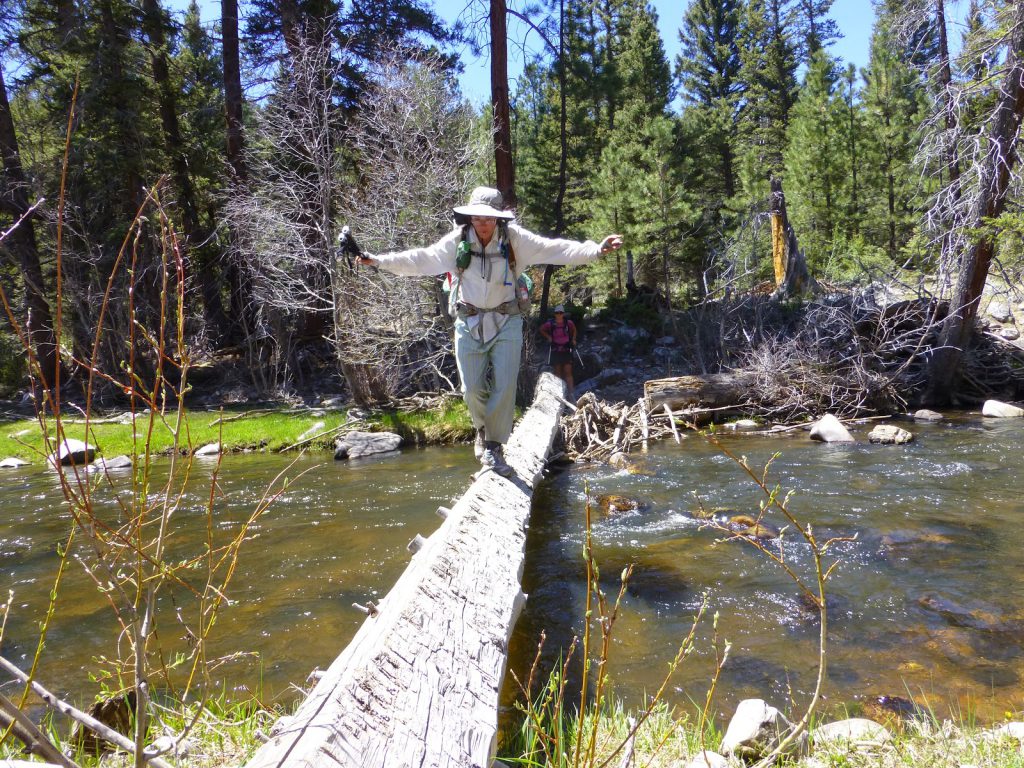 Soon after the crossing, we spent a good 45mins on the most signed and complete section of the CDT yet. It was wonderful and I felt like I was in the PCT. The trail was maintained and extremely well blazed. What a treat and such a foreign feeling on this trail. They even had the arrows on the blazes indicating turns in the trail by pointing them the corresponding direction. 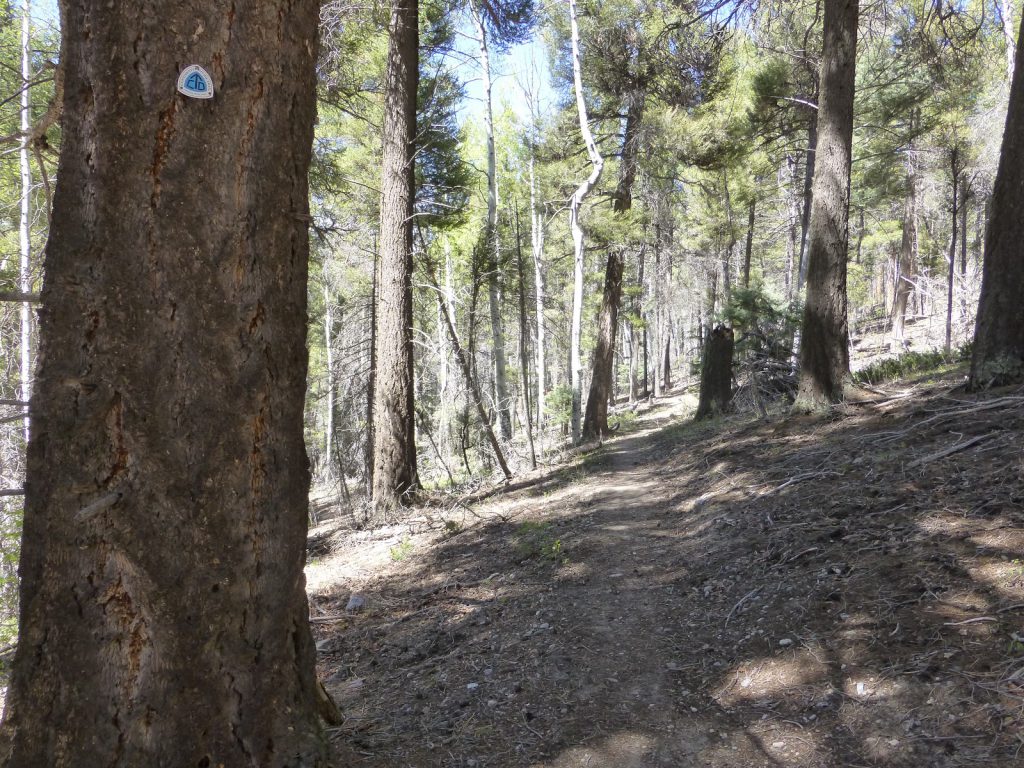 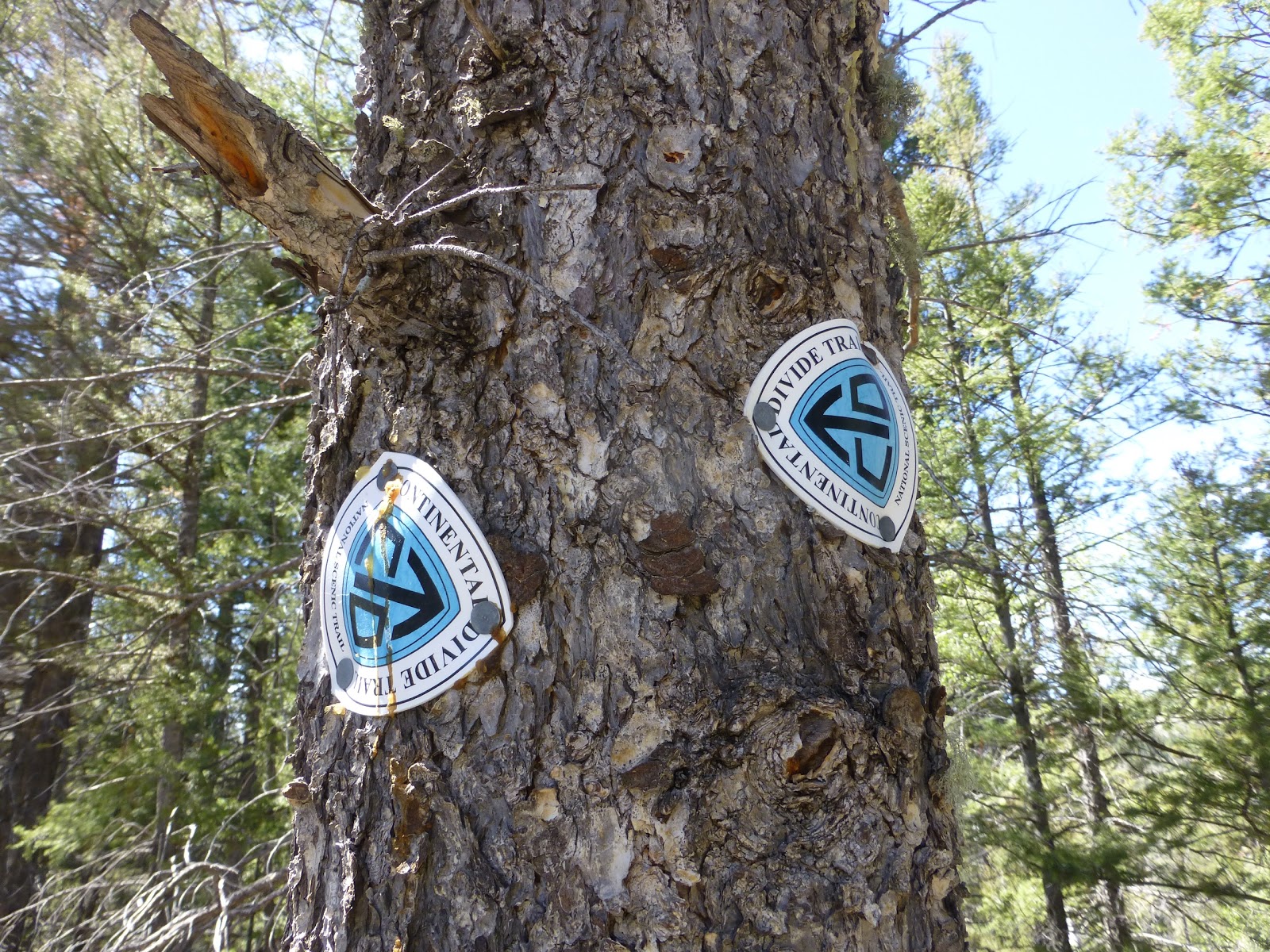 The rest of the day, we knew our destination would be Lake Hopewell Campground. Even though it was the Saturday of Memorial weekend, we had hope that there would be a small campground available that we could pay for. It would be cheap to split among all of us and we’d get bathrooms, a picnic table, trash cans, and a spigot with drinkable water! All luxuries to a thru hiker! A few hours before our destination, everyone except Sweetfish and I needed to stop to filter water. We hiked on like usual agreeing to meet at the campground. The waypoints I had showed that we just needed to hike on a dirt road to the lake so Sweetfish and I did that. What we didn’t know was that the rest of the group had waypoints that took a new trail that paralleled the road. Sweetfish and I saw a note on the map that the trail may be incomplete, so we stuck with the road. As Sweetfish and I approached the lake, we walked by countless large and small groups car camping. One group called us over and offered us each two sodas. I took them to share with the others since I don’t drink soda. They also offered us to stay for some chicken they were frying, but we knew we needed to get closer to the lake and back on the road to avoid missing the group. The area ended up being much more spread out than we expected and we ended up spending about an hour walking around trying to figure out why the rest of the group hadn’t caught up to us and where they might be. In the process of looking we happened upon a family with a large campsite that offered us watermelon and said we could camp in the trees near their site if needed. They also offered for us to have some food when they cooked dinner. It was almost 7pm and we figured the rest of the group may have stopped and chosen to camp somewhere else, so we went back to the family’s site and took them up on their offer. I walked over and introduced myself to the family next to their site and before we knew it, Sweetfish and I were having cheeseburgers and hit dogs with them! Here we are with our amazing hosts Mary and Frank. 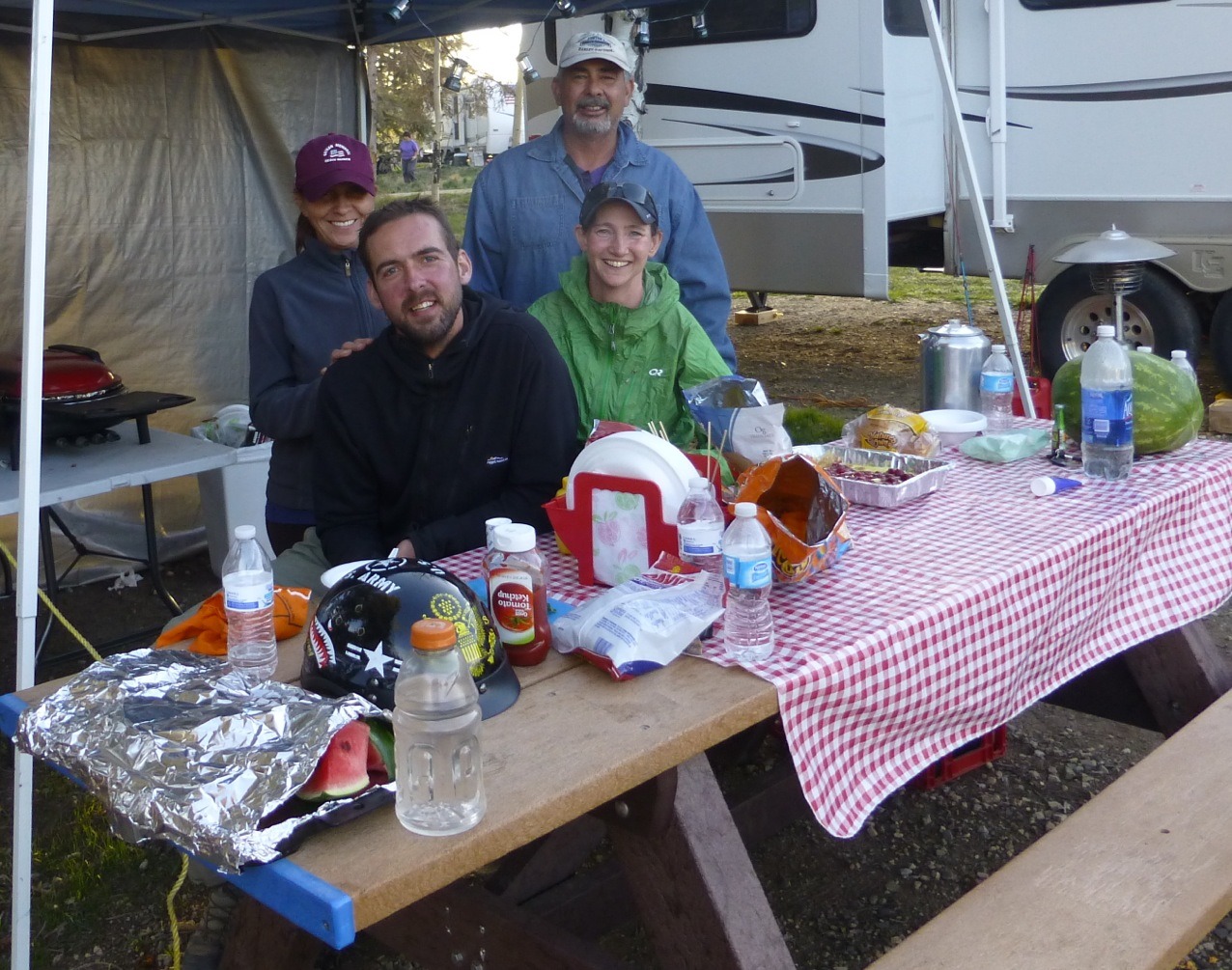 They were there with their family and knew about the CDT and were so giving! While we were there, LoveNote found us. She and the group had met a woman and her daughter doing sections of the CDT by horse and the woman kindly drove LoveNote around to try to find us. Eventually we all ended up eating with Mary and Frank and talking by the fire. Our first fire on this trail since we don’t tend to make campfires. It was such a treat! Mary and Frank are retired from the army and both of Mary’s kids are in the army too! Mary told Sweetfish and I about the local 100mi pilgrimage she was setting off to do next weekend. She has done it for at least 10yrs and she told us how it has impacted her an even her son who walked it last year. She had a great appreciation for what we were doing as we did for what she does every year. She cried with joy as she told us the impact the pilgrimage has had for her and she had me and Sweetfish welling up too! It really was amazing to meet Mary and Frank and to get to know them in the brief time that we had. I felt like it was destined to happen and I’m so happy our paths crossed! I’m up later than usual tonight and have written a lot, but I know this will be one of the top memorable moments from this whole trip. THANK YOU to Mary and Frank for bringing us into your hearts this evening. You are wonderful people!!!