May 26th
Lake Hopewell Campground(608.1)- Below Brazos Ridge(634.8)
Camp Elevation: 10,250ft
26.7mi
This morning we woke up at the campground and were treated to a wonderful breakfast from Mary and Frank. They had everything a thru hiker could dream of…coffee, hot chocolate, juice, breakfast burritos with egg, potatoes, and bacon, and bananas. We all gathered around the fire and ate. Frank had gotten up extra early to get his first round of fishing in and brought back a fish that he gutted and cooked on the grill for us stuffed with jalapeños, garlic, and seasonings. Such a wonderful start to the day! THANK YOU again to Mary and Frank for such hospitality to complete strangers. They were just out with their family for the holiday weekend and welcomed six dirty hikers into their campground home. Such an amazing thing! 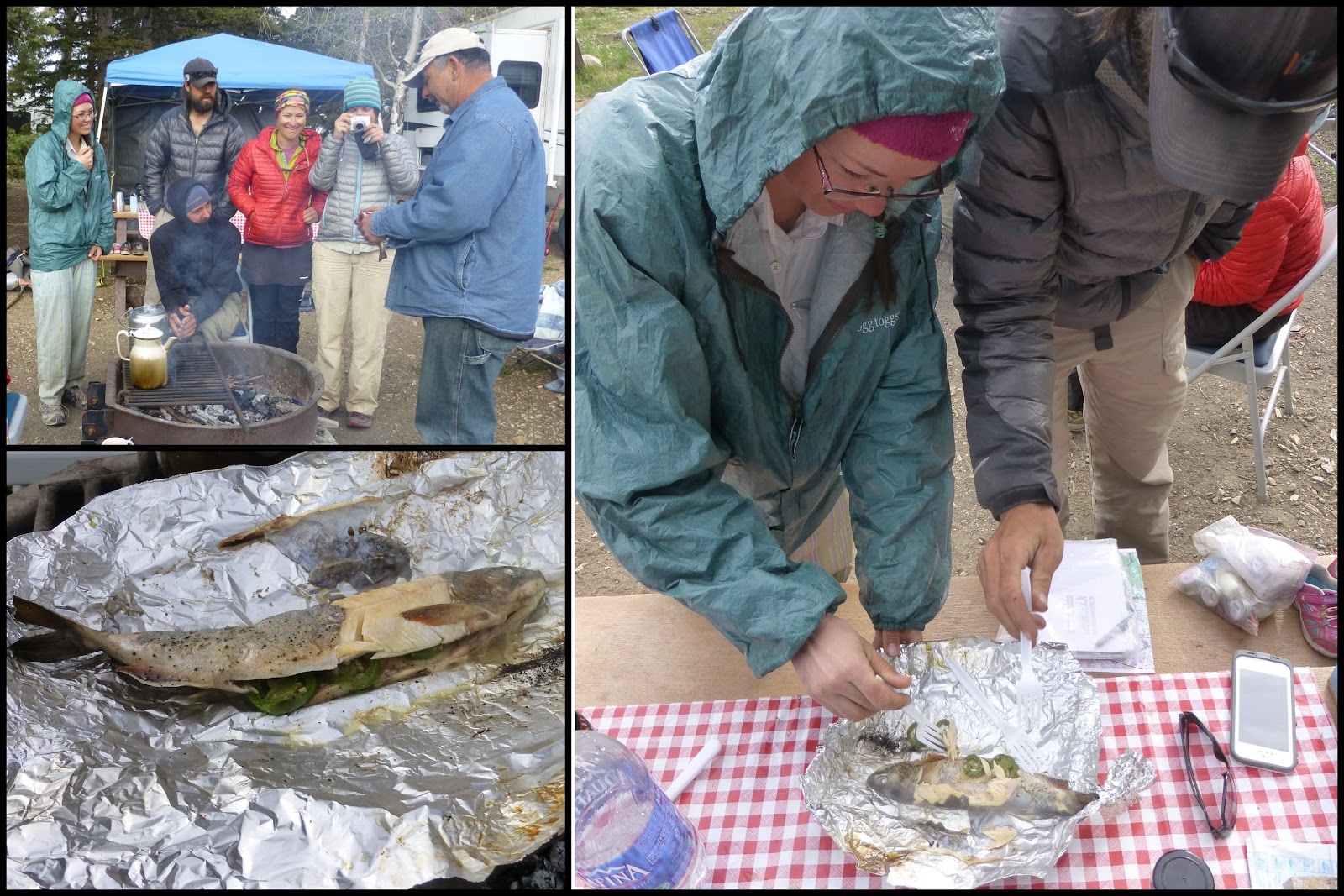 We got a later start at 8am and set off fully fueled. I was in one of my zones and felt really good today. I was really surprised because our elevation stayed between 9,395-10,865 and that has been slowing me down. I didn’t feel dizzy or tired, so I’m hoping that I’ve acclimated and continue to do so. We are going over 11,000ft tomorrow and the next leg stays consistently high. Today was a beautiful day with lots of entertaining hiking. The first half of the morning started off on an old service road that was converted to a trail and I was worried the whole day might look like this. We’ve gotten a lot of roads like this lately. 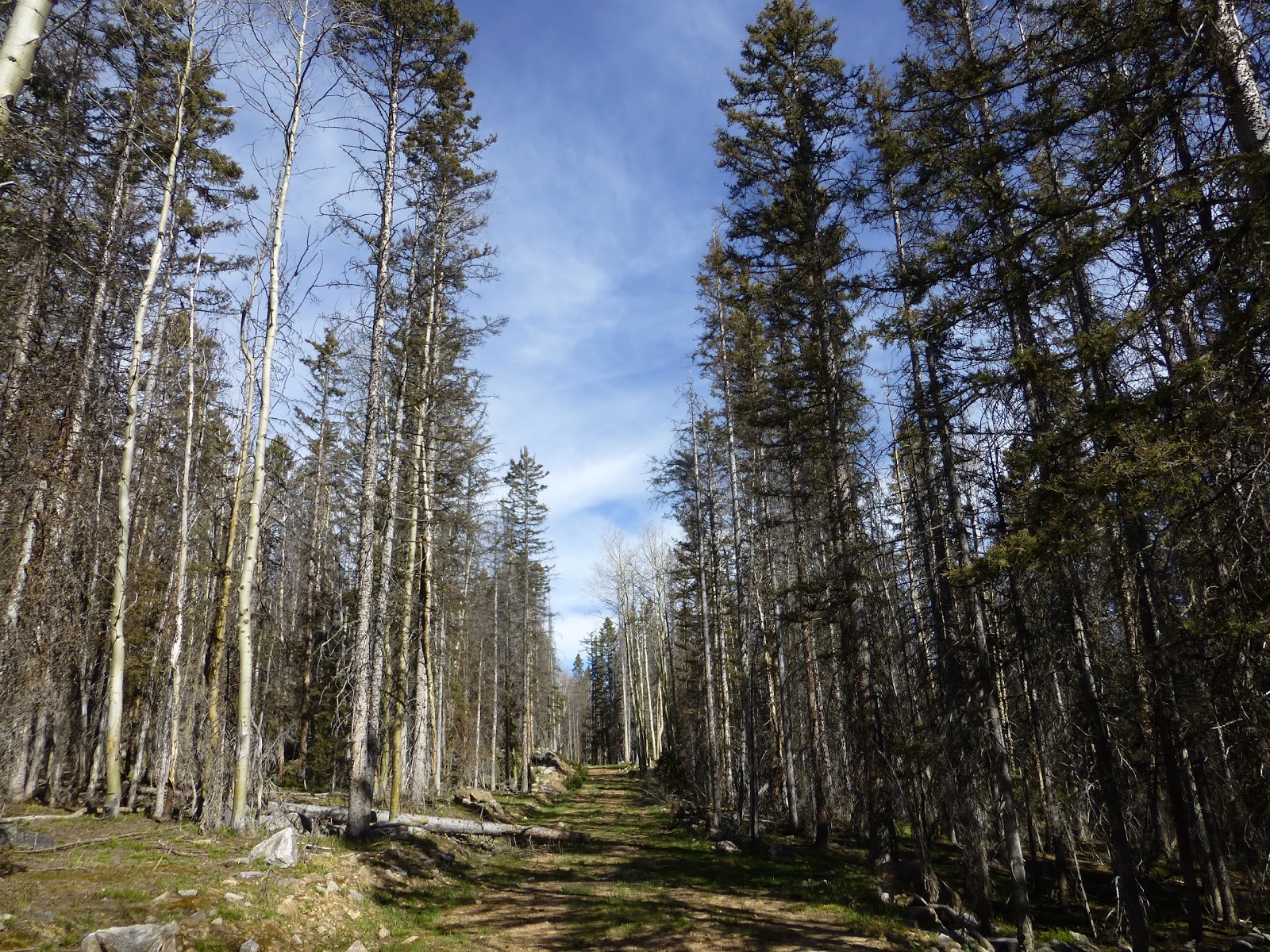 Then we got to the fun stuff! The trail dipped and wound through these large fields and the views were wonderful all day. We came in and out of trees from time to time. 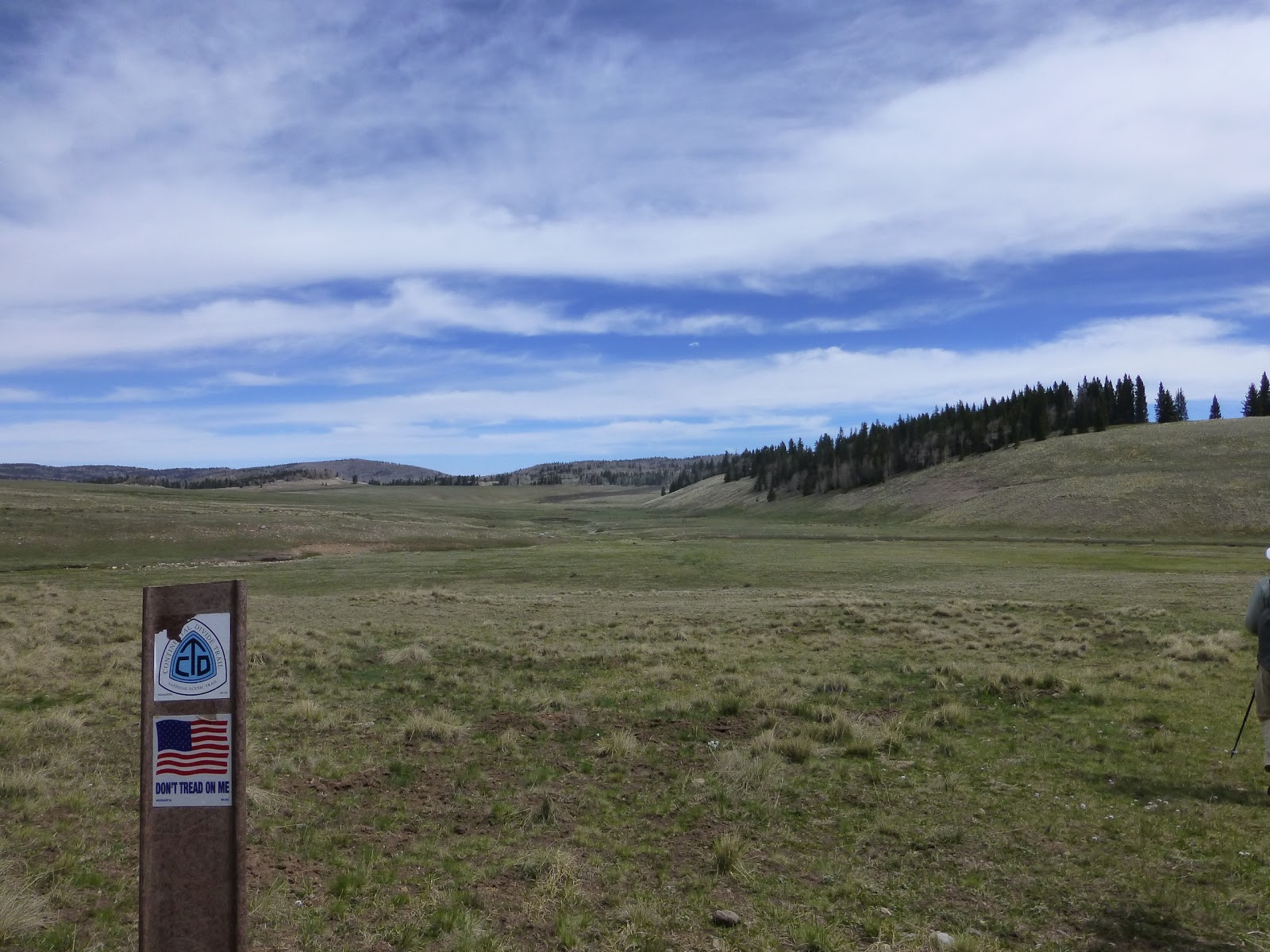 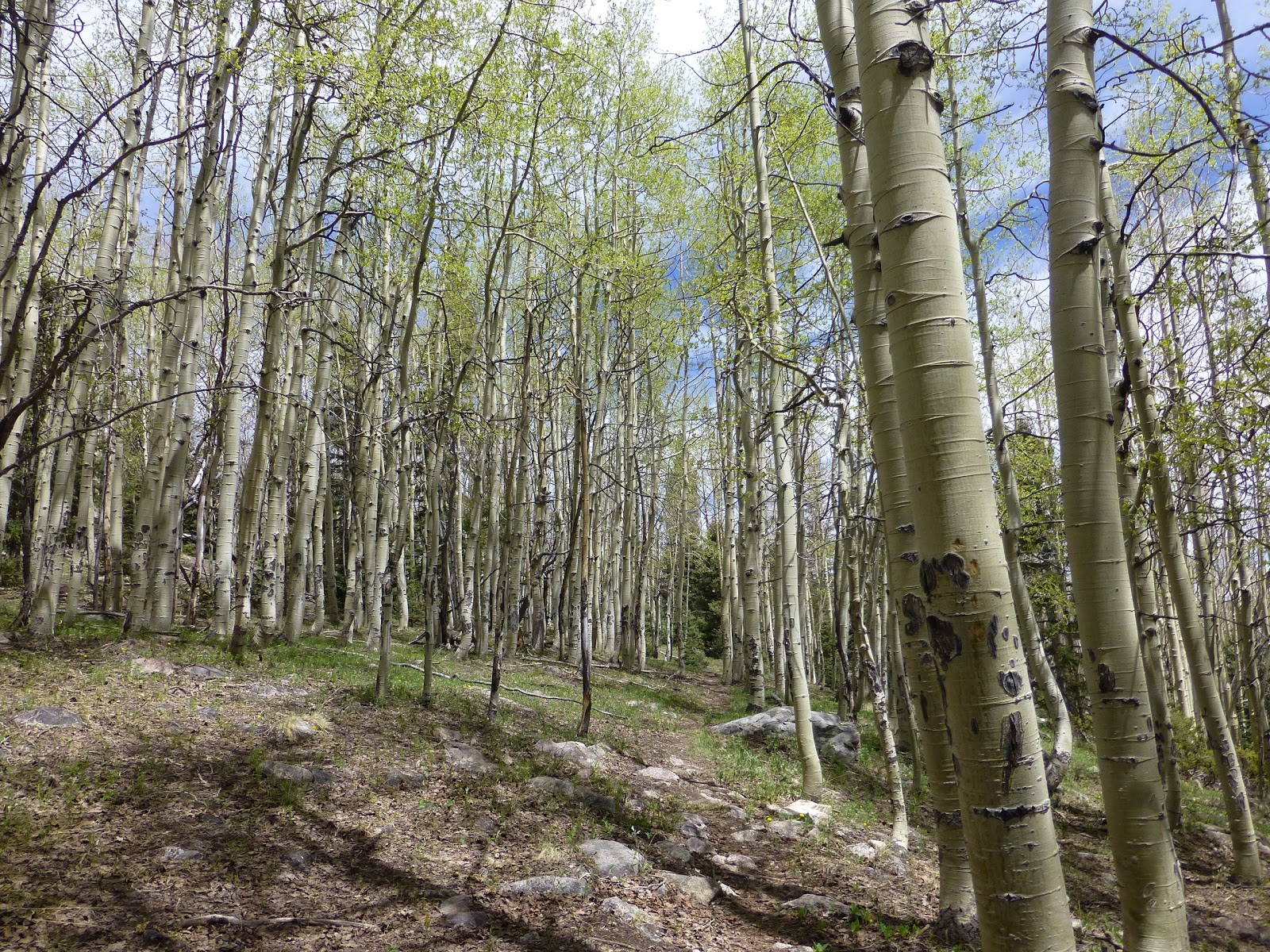 My gut told me to hike on at the pace I wanted so I spent a good portion of the day leading, but the group was never far behind. In fact, at one point, I had been cruising for about an hour when Ninja popped out of nowhere onto the trail. She had noticed on her GPS a cross country route that was more efficient than the trail and just went for it. There are many hikers out here who do that kind of thing and have fun doing the cross country stuff from time to time. I’m not as confident if it isn’t a recommended option on the map. These last two days, I have realized that I must have accidentally loaded the waypoints from 2012 onto my iPhone GPS app. That’s annoying and I need to fix that next time I have my laptop cause they are off just enough that I miss out on new trail routes. The points will get me there, but the mew ones are better. Some people wonder how we total mileage each day. It’s a combination of totaling the mileage given on the Ley maps with the Bear Creek Survey waypoints that correlate with the “official route.” Today we were noticing mileage differences in the two and we really have no idea which is right, but are going with the Bear Creek ones when possible because they were done professionally and are considered the official route.
We had lunch by a stream and I was actually able to clean my socks to have clean ones for tomorrow. That is common, but we haven’t been able to do that at most of the water sources thus far. Water was plentiful and frequent along the trail today, so I feel like today was the first day I really didn’t have to pack much water or worry about when the next water is coming. Yay!
By lunch, I told the group I might hike ahead tonight since tomorrow is a town day. It is our first hitch into a town and the hitch may take awhile to get. If we split up a bit, we may have a better chance of someone picking us up for a 12mi hitch. I left lunch just ahead of everyone else and about 100yds away I saw Annie, Sweet As, and Aquaman taking their lunch break under a tree. We were so close and had no idea. The rest of the day, the 9 of us leap frogged one another. LoveNote was having a rough day with leg pain and feeling tired, but was doing a good job of hanging in there. The majority of us were doing a great pace and I think the scenery really helped! We had these great stretches along ridges.

At today’s highpoint there was a great view and it was super windy. We could see mountains with snow in the distance and it was a bit hazy, but it was a great boost to be up there and look out over all of it! 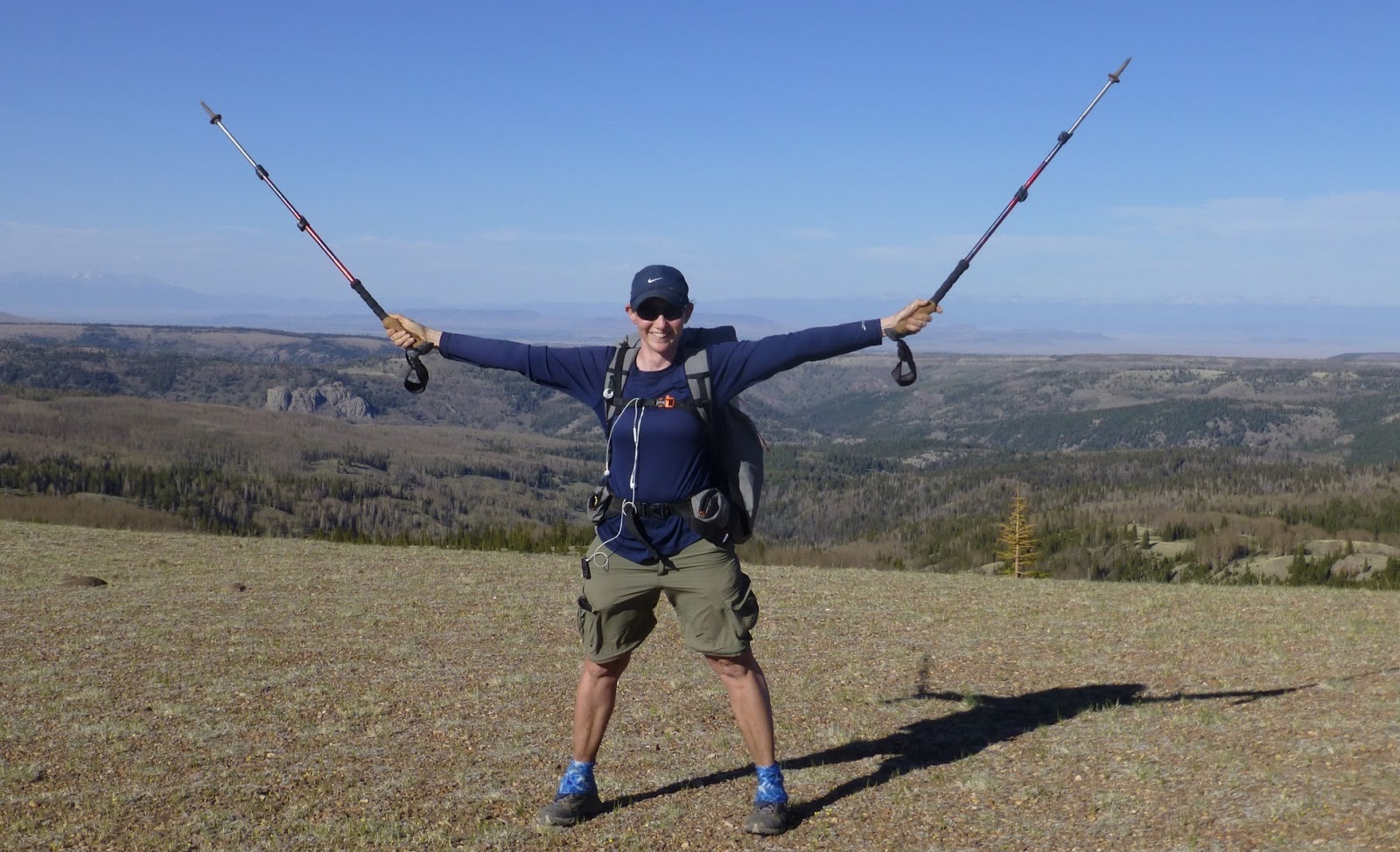 At the final water source, my regular crew planned to soon stop and camp. I wanted to go about 30-45mins further, but there was little point in breaking away with such little difference, so I decided to camp with the group. Annie, Sweet As, and Aquaman hiked on and like to camp about an hour or two later than us. They put in high miles everyday and like to hike much later than I could. We have found a great sheltered area under tree cover and I’m looking forward to a full night’s rest!
We have about 15mi to Cumbres Pass where we will hitch. An we are told much of it has some snow we will slog through. We have the option of taking a lower road, but we aren’t going to do that. We decided to stick with the trail regardless if snow because it will be a good indicator and practice for what lies ahead. Tomorrow might be a long day getting to town, but I’m hoping it goes by fast.