Day 38: Slow and Steady in the San Juans

Last night was definitely the coldest night we’ve had on the trail so far. When I woke up, both my Gatorade bottle and water bladder inside my tent had thick layers of ice along the I side of them. I was still warm in my 10 degree ZPacks sleeping bag, so I was thankful for that! The goal was to leave at 6:45am, but it was a bit later with how cold it was and all of us had varying degrees of frozen shoes to put on. I had mine wrapped in a plastic bag inside my pack inside my tent and somehow the laces were still frozen and took some effort to get them tightened and tied. The others did not wrap their shoes and had frozen shoes in addition to the laces. Oh the joys of hiking through the snowy sections on long trails!

For those of you who are not familiar with the expectations in the snowy mountainous sections, most thru hikers try to average 15mi a day. There are a lot of factors that play into this. First off, it’s exhausting! We were near 12,000ft most of the day and I’d say about 3/4 of the day was in snow. We were fortunate that for most of the day, the snow was packed hard enough that we weren’t postholing deeply. When we’re in snow, there is no trail to mindlessly follow, so there is also a lot of time figuring out where we are, where we need to be, and the best plan of attack if the “trail” is covered in snow. Here is an example from this morning where Drop-N-Roll and Stryder strategize on the route we need to take. It is clear enough to see what’s ahead and we have a general idea of where the trail goes, so we head in that general direction for what is safest when it is covered in snow. 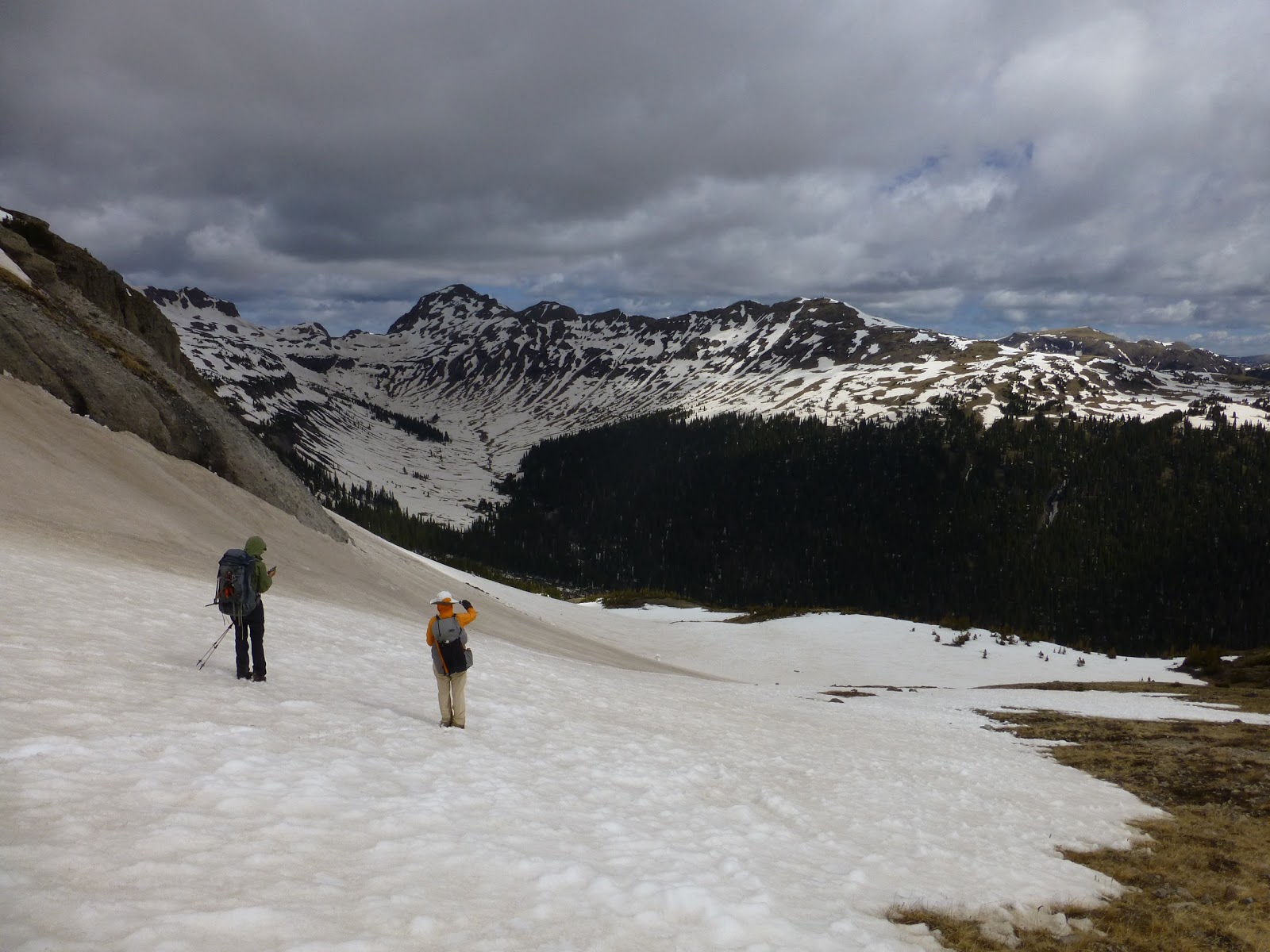 Thankfully, the weather was much better today and it was slightly less windy. There were even times when we commented that it was actually enjoyable! There was a chance for thunderstorms today and the clouds were dark this morning, but fortunately, they got lighter as the day continued. 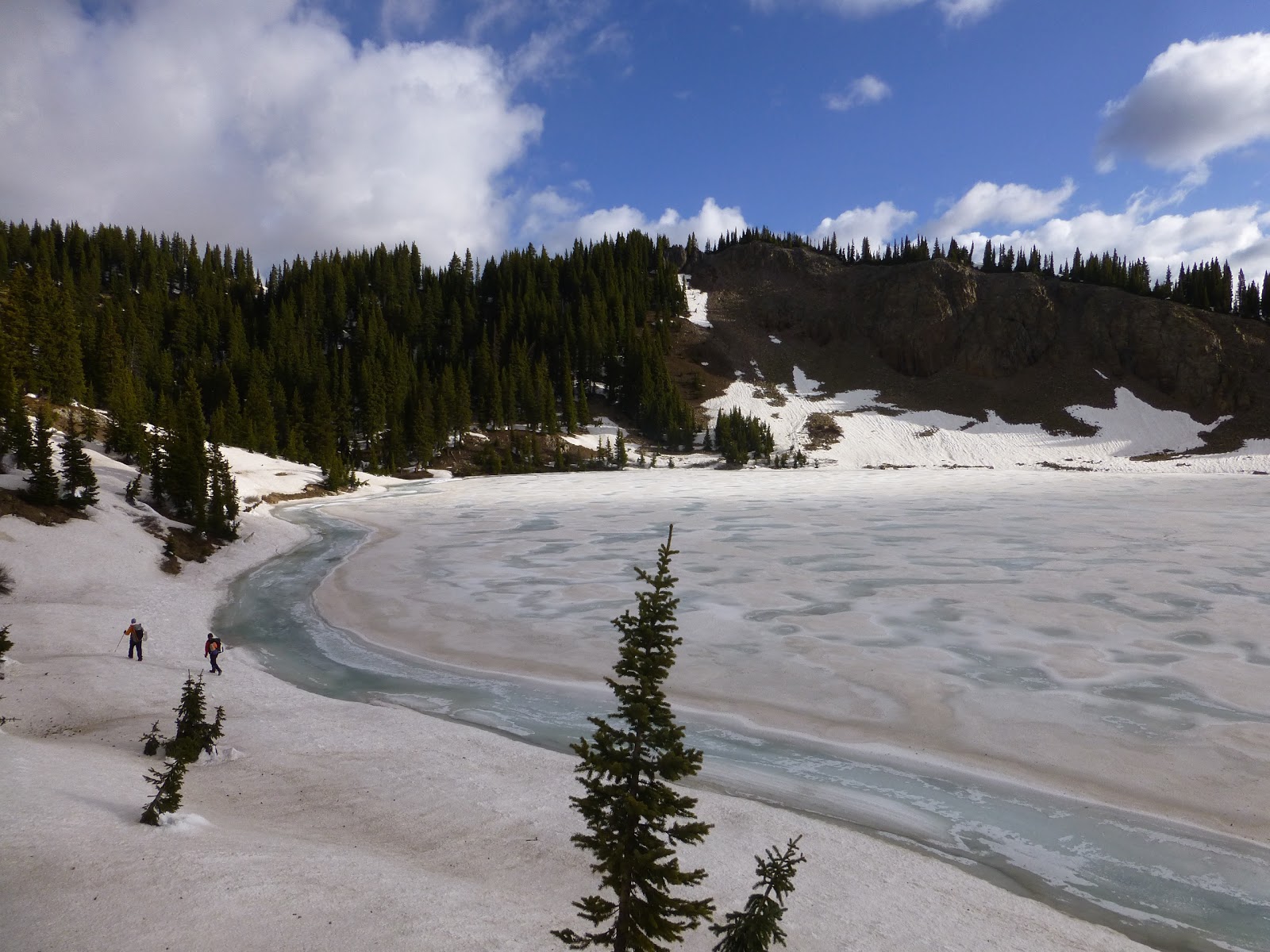 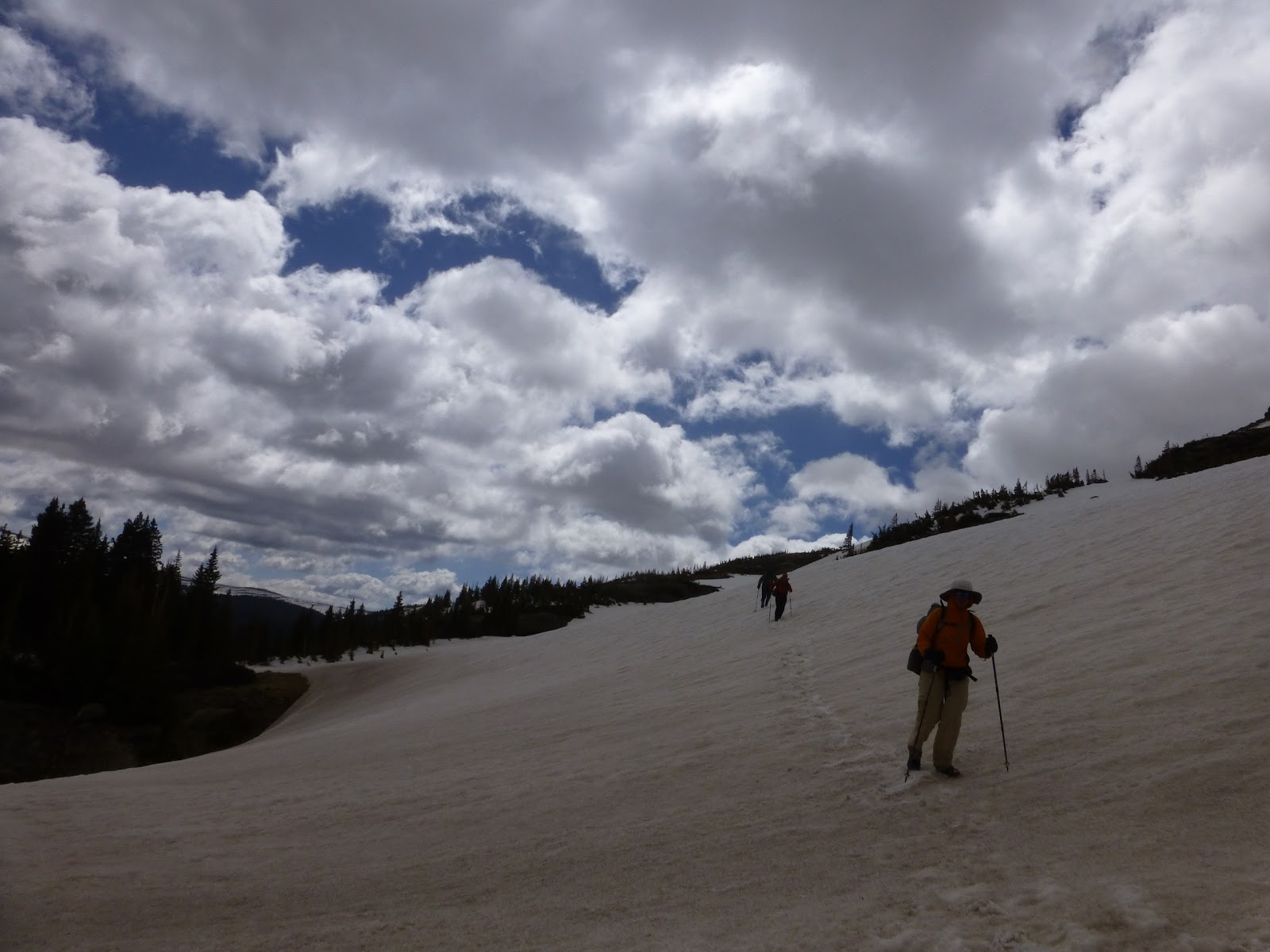 Today we had a couple of canyons where we needed to contour along on a steep traverse. In this picture here, Stryder is pointing in the direction that the actual trail goes, but we needed to end up on the upper right as that is where the trail wound around and ended up exiting the canyon. 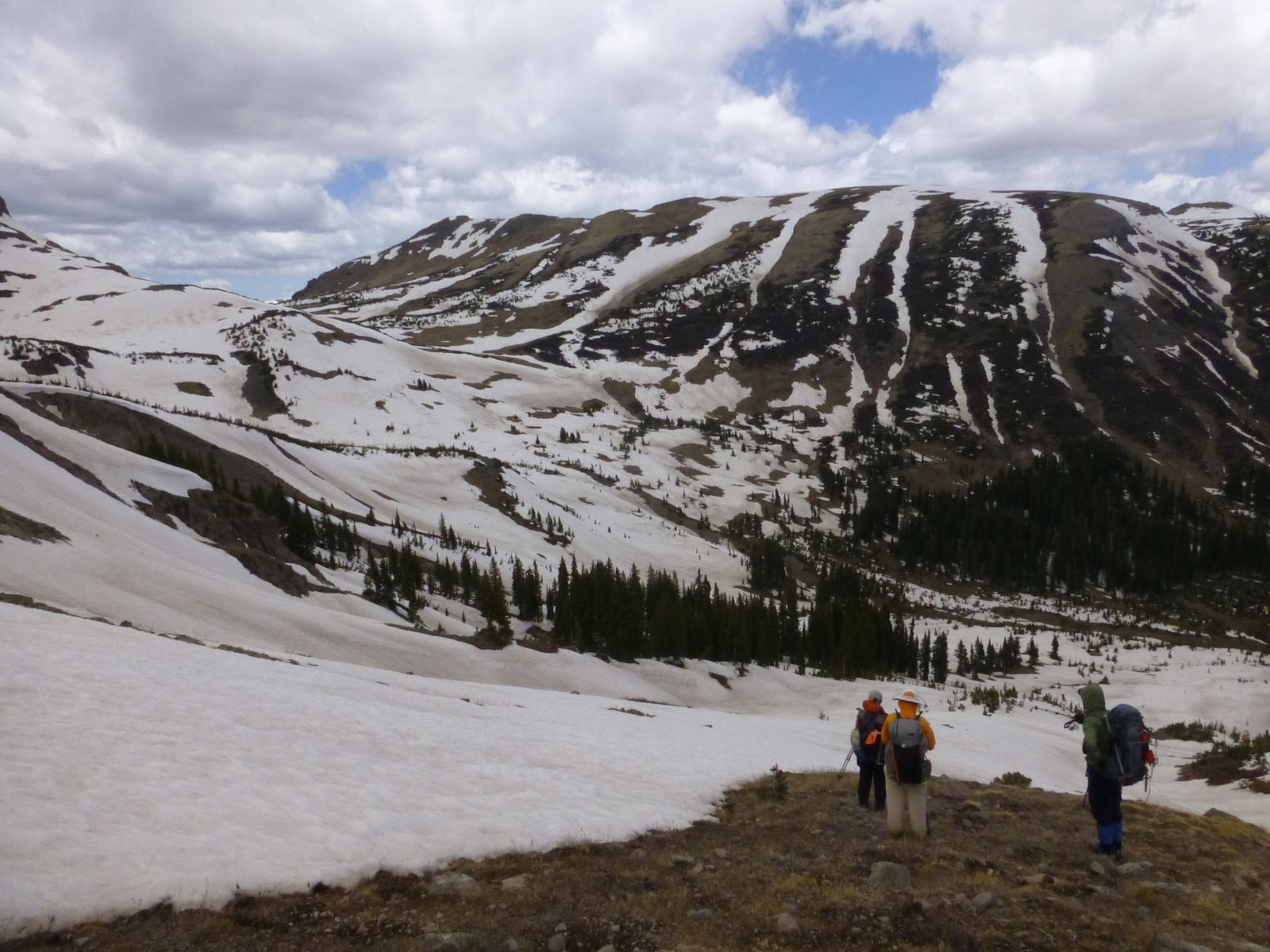 The traverses on some of these can be very time consuming and dangerous because they are at a steep angle. In this case, we noticed that those ahead of us chose to glissade(slide down) the snow and then hike up the opposite side. I got a video of our glissading and it was our first one of the hike. Good times!

At lunch, we realized that our timing might have us camping early because there were limited options for sheltered camping. If we went too far, we’d have to camp above tree line well above 12,000ft. With how cold and windy it has been, we knew that wouldn’t be an option and that we would probably be camping early. After lunch, we were excited to get some dry trail for a bit on and off. It was beautiful! 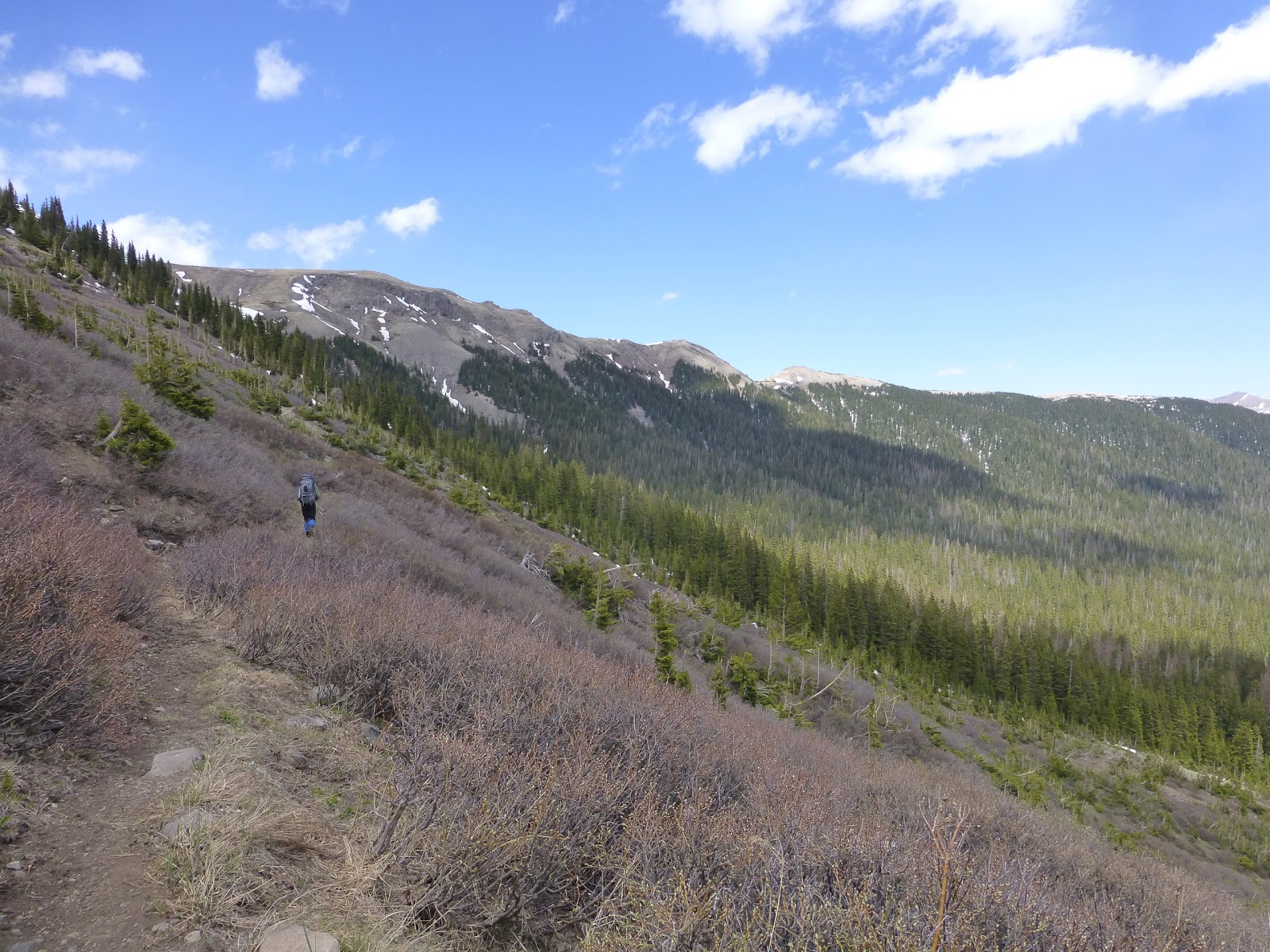 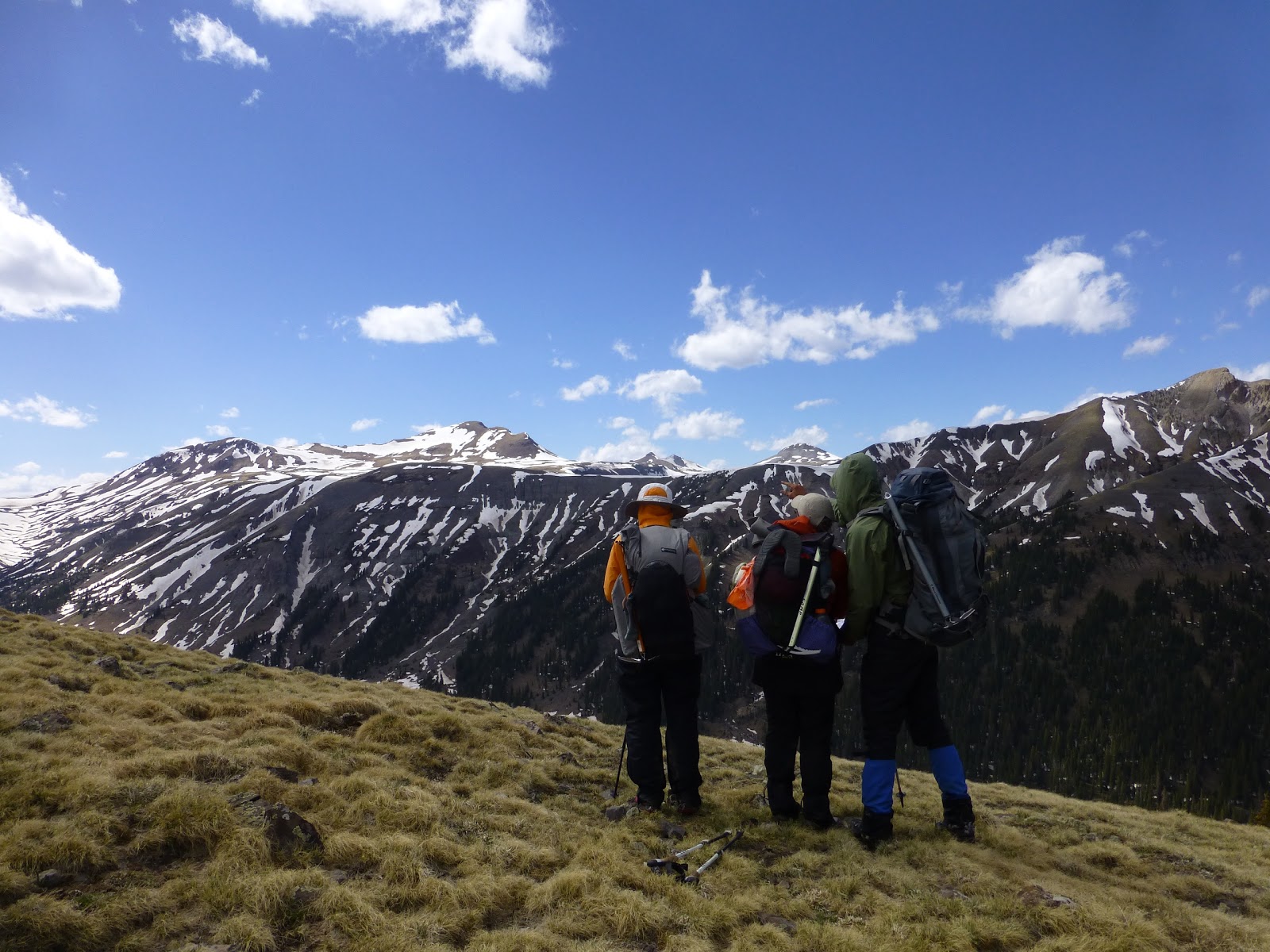 Soon after that, we had an afternoon of traversing that took awhile and is not my favorite thing, but looks really badass in photos! 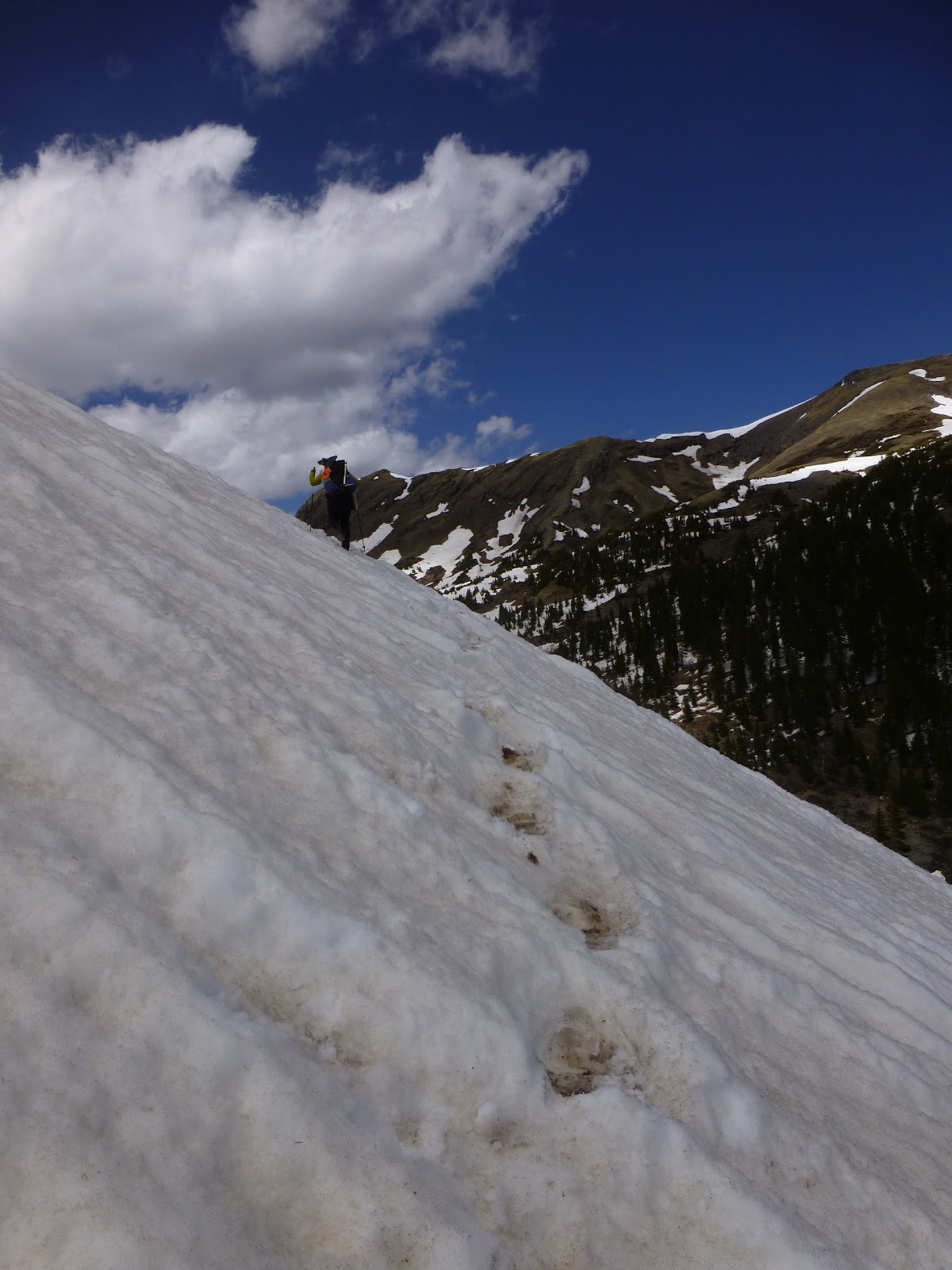 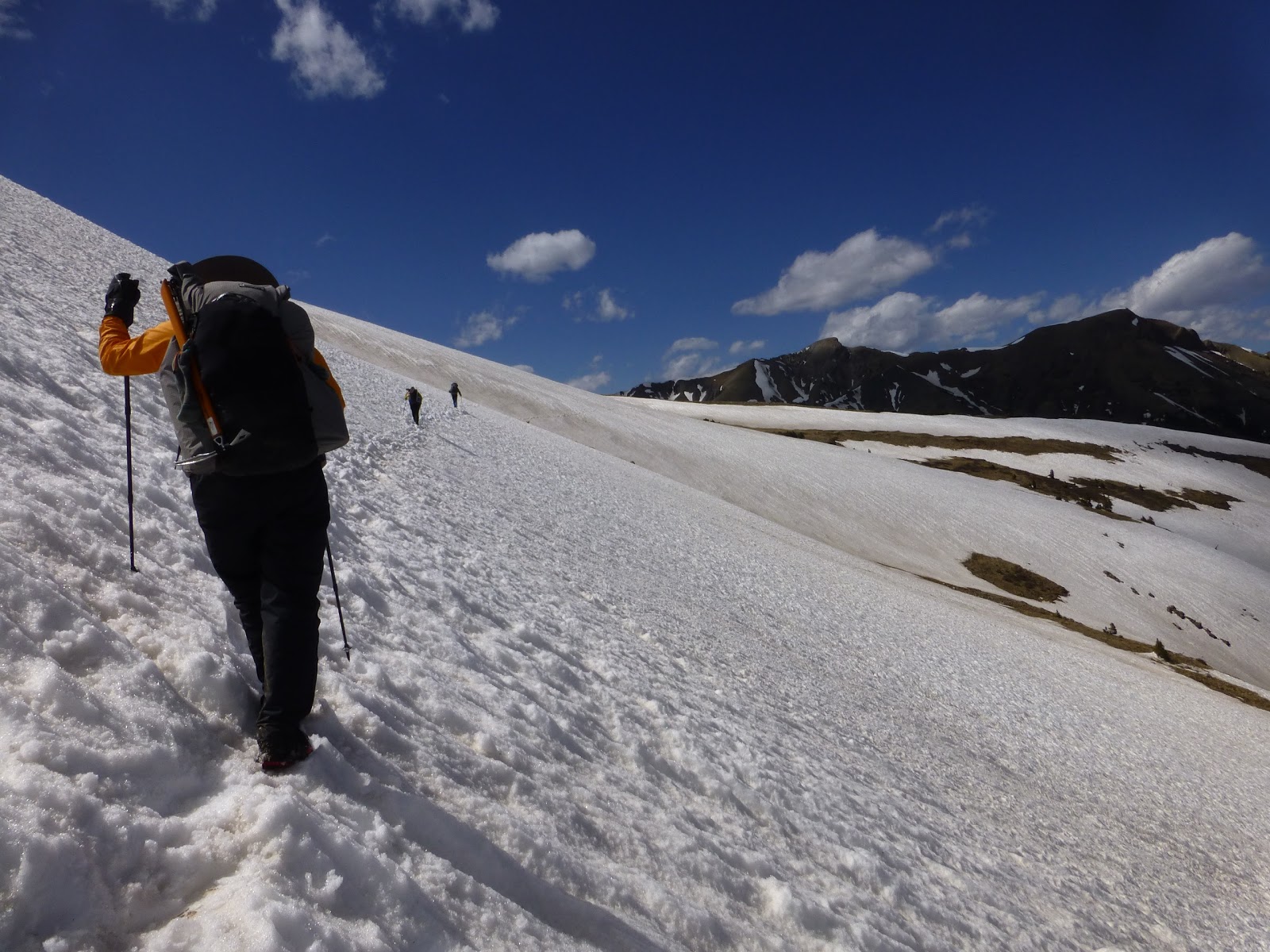 I realize I have few pictures of myself in this section, but with all there is going on, it’s not easy to stop someone and ask them to take a picture of me. On the last traverse of the day, we chose to use our ice axes. They are safety measures to be used if one of us slips and starts sliding down the incline. Here is Drop-N-Roll using hers on our final traverse of the day. We are camped in the dry area on the right hand side. The trail stays in the snowy side, but we crossed the river in that canyon to find dry sheltered camping. 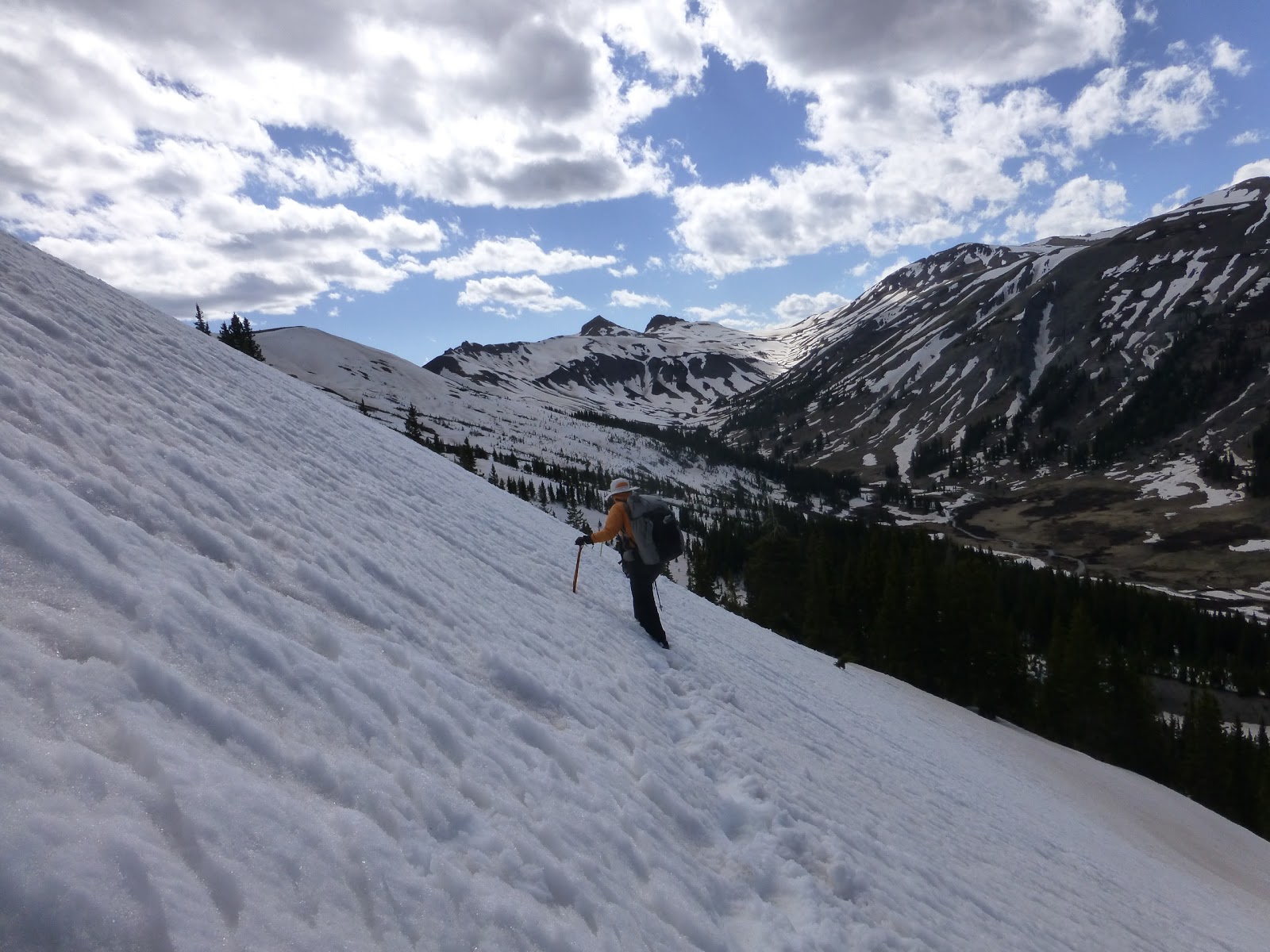 We stopped early at about 5:30pm to camp just before the high exposed area that we will do tomorrow. It was difficult finding level protected ground to set up our tents, so we are all sleeping close together and in less than ideal angles, but it’s sheltered from the wind and possible weather, so it’s gonna have to do. If you look to the upper left of the picture, you can see the ridge we were on top of and had traversed across and then down to get to a sheltered place to camp. 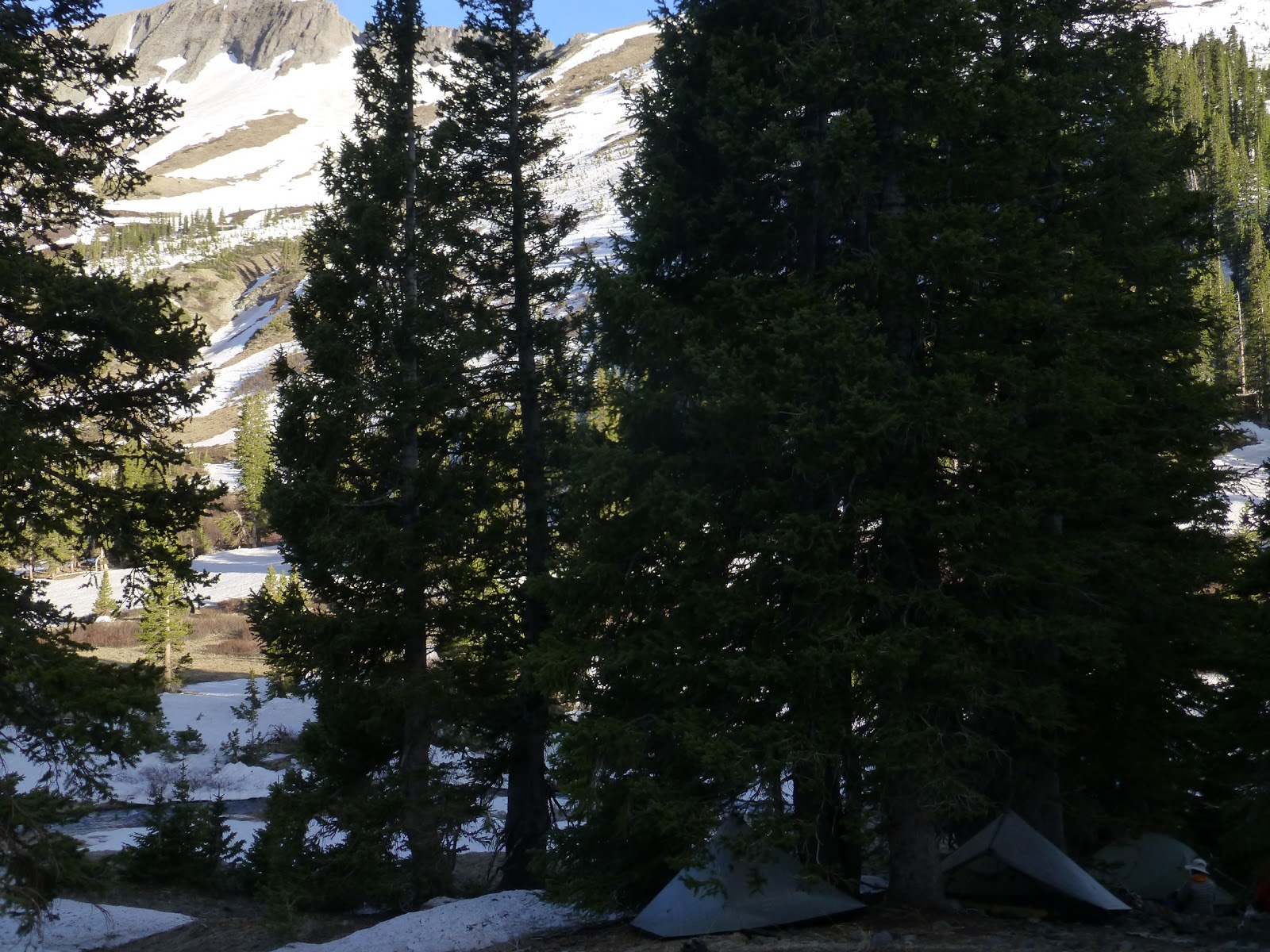 We are going to try to get going a bit earlier at 6:30am tomorrow in the hopes of doing more miles since today was below 15mi. An update on my cough that has developed. It is definitely affecting me and my energy level. Good news is that I coughed a lot less today, but the bad news is that it’s more flemy and sounds worse when I do cough. Only a day and a half until our next town, I’m hoping it clears up! No sign of team MeGaTex.