June 3rd
Wolf Creek Pass(Pagosa Springs)(719.6)-A Mile After the Sawtooth Trail Intersection(734.8)
15.2mi
Oh man, what a day for Rockin’ and Silly Chili to start off their summer on the CDT! For those of you who missed the numerous times I’ve mentioned Rockin’, she’s a friend of mine I met through our backpacking blogs when I did the PCT in 2011. Rockin’ is the main one who inspired me to start a blog and seeing her blog encouraged me to do the PCT solo. If you haven’t seen her blog yet, she will also be blogging daily in the CDT and the website is www.ladyonarock.wordpress.com. Just as most of my pictures will have Rockin’ and her son Silly Chili, many of her pictures will have me in them. Her photos are awesome and she has a much better camera than I do, so add her blog to your list!
I will be doing the rest of the San Juans with Rockin’ and Silly Chili, as a smaller group is ideal for this section when it’s important to stay together. The rest of the crew I’ve been with is just behind us by a few hours probably and we will still be overlapping in towns and possibly on trail. As for the rest of the hike, we will just take it as it comes and see how things work out. I’m really excited to hike with Rockin’ and Silly Chili as they hike more my style and even challenge me to push more which I like. They like to get up early to hike which is also my preference, so I’m looking forward to that. This morning, we left from the hotel at 6am to head back to the pass where Rockin’ and Silly Chili would start their summer section hike on the CDT. They hope to make it to Yellowstone before Rockin’ goes back to work as a teacher and Silly Chili starts grad school. This morning, the awesome Beacon gave us a ride to the trail and we got the ceremonial photos since this was like the southern terminus for Rockin’ and Silly Chili. Check out our fun picture as we lined up on the metal strip that signified the actual Continental Divide. 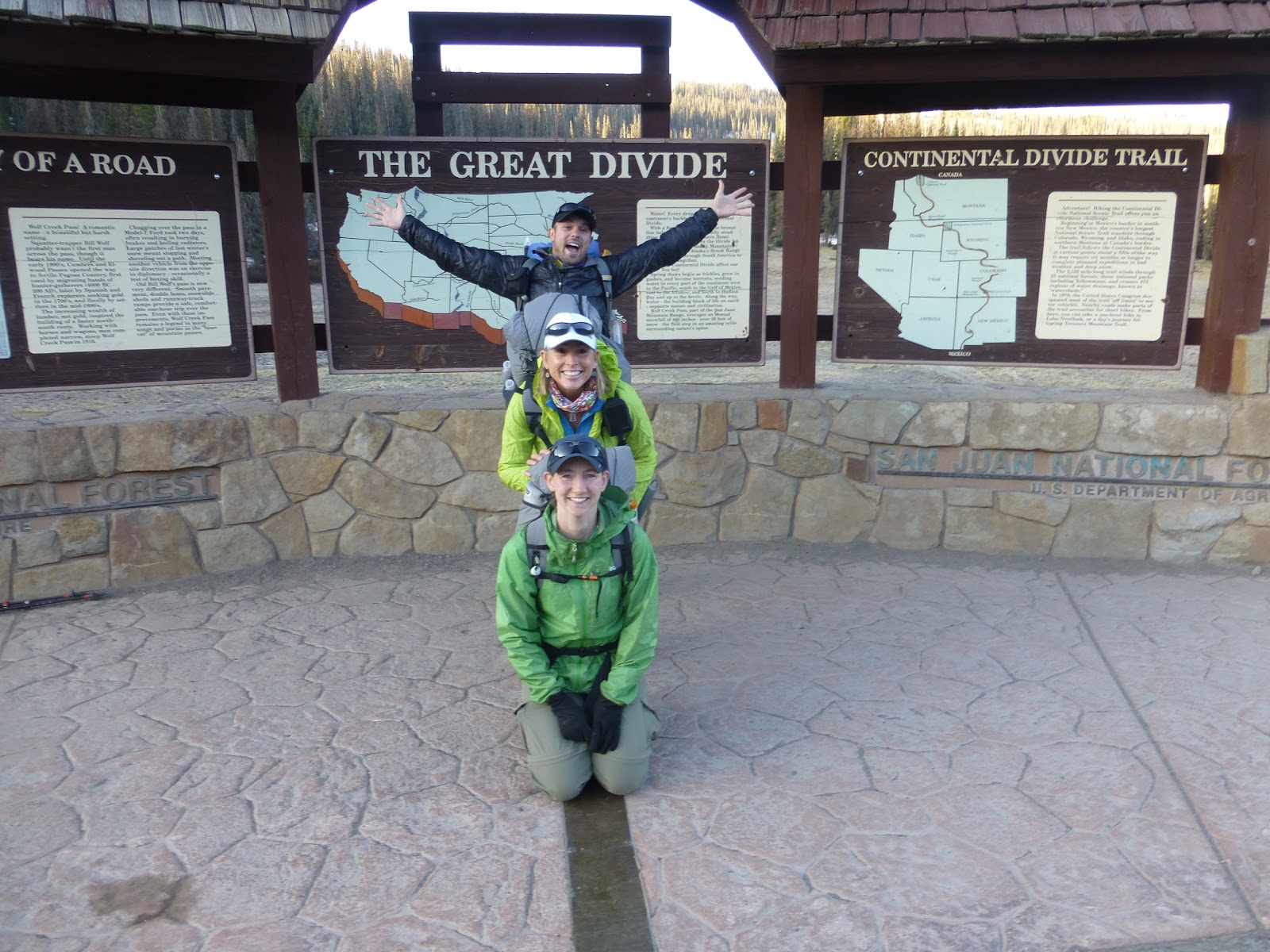 We were on trail by 6:45am and had high hopes of getting over 20mi in today. The day started off well with clear trail the first mile or so and things quickly changed…we officially entered the Weminuche Wilderness, which is a popular part of the San Juans. We were in the trees all morning and there was a ton of snow drifts still piled up. 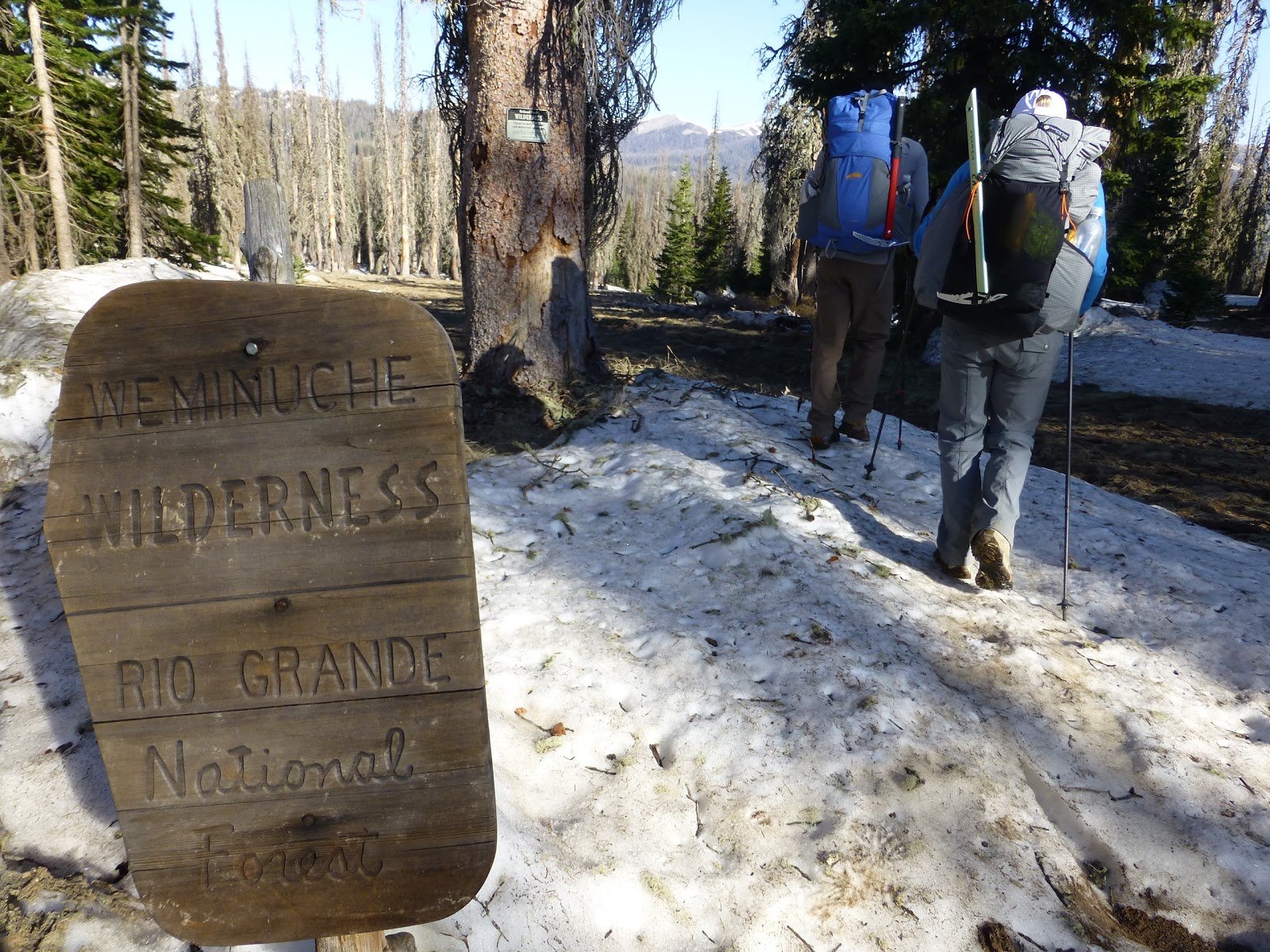 We had to keep relocating the trail as it was buried under snow and there were plenty if blowdowns to throw us off track. It was quite a welcome for the two of them and was quite tiring. The first 8mi today took us 5hrs to do with the snow. Plus, it was the first warm day and the snow was extremely soft, so we were exhausted by the deep postholing with almost every step. I want to point out how hardcore Rockin’ and Silly Chili are as they are getting on trail at a very difficult time. We are at our highest elevation consistently staying near 12,000ft and we had a ton of elevation gain today. Much of the dsy was in snow and it felt like most of the day was uphill. If I had come from home and tried to hike directly up above 11,000ft, I know I wouldn’t be able to do it! It’s amazing how well they took to it! Here is Rockin’ after falling and having difficulty getting up in the soft snow today. 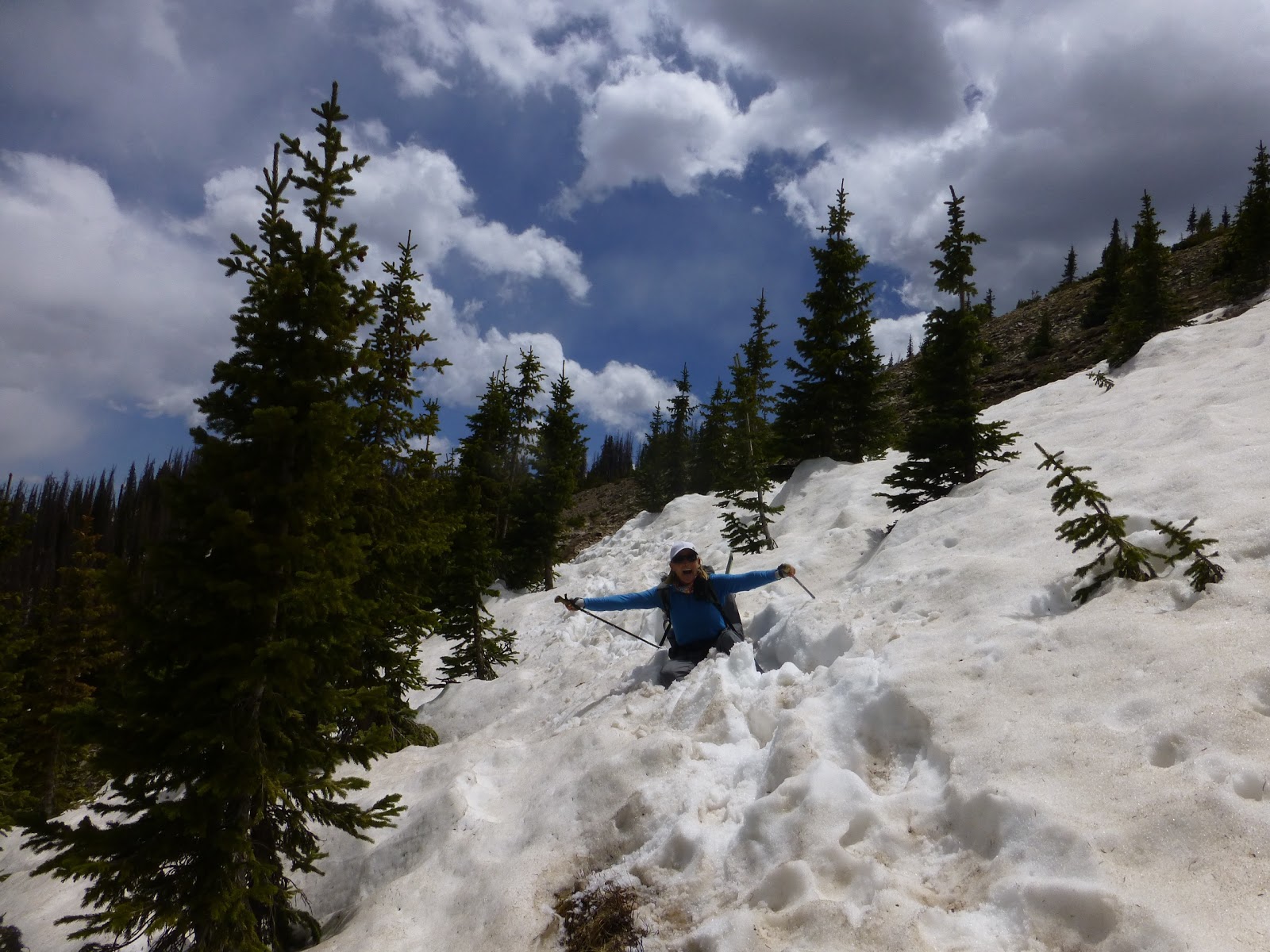 After lunch, we finally got out of the snow filled trees and were treated to amazing views the rest of the day. We had a long ascent up over a pass at 12,500ft and it was really slow going as we were all feeling the elevation. My cough is still present, but I was able to get an inhaler and it seems to be helping significantly, which is a relief. When we got over the pass, the clouds got bigger and darker… 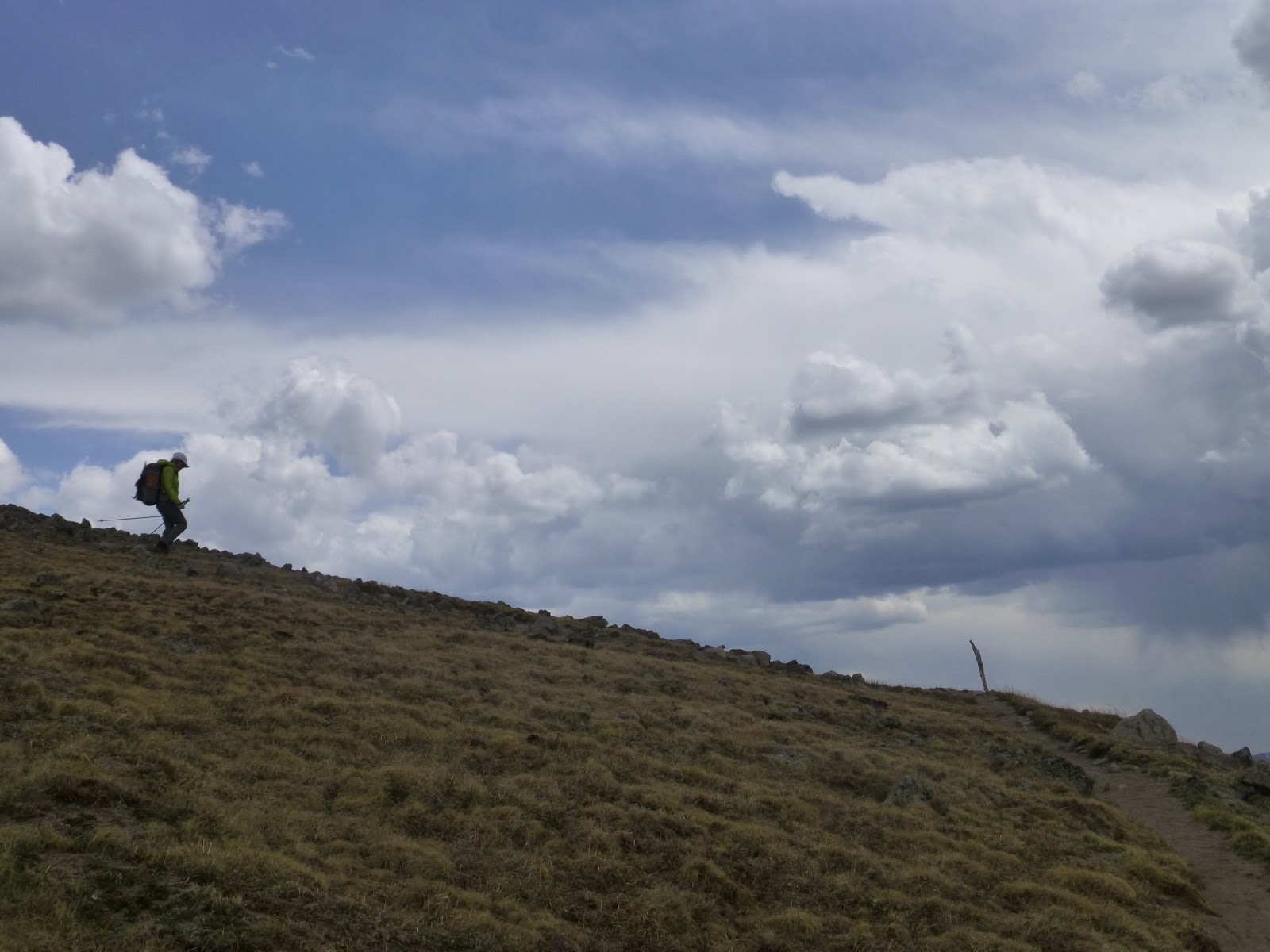 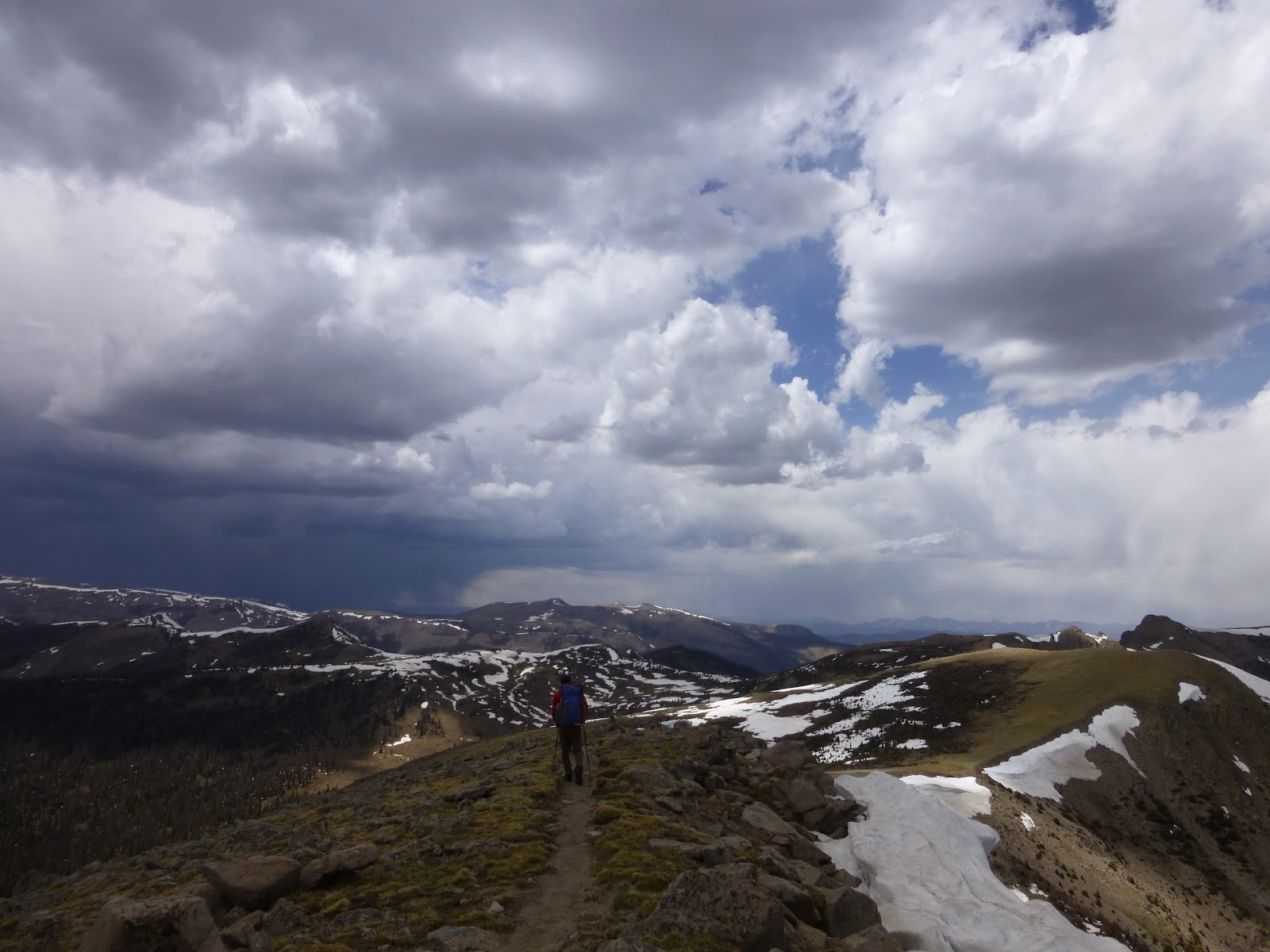 Soon we heard thunder rumble in the distance and we could see lightning bolts in the distance.
Afternoon thunderstorms are possible this week as most days out here and this on looked like we weren’t going to dodge it. As the wind picked up and the temperature dropped we started to take it seriously and got all organized to get poured on by waterproofing our packs with trash bags and getting all our layers on and waterproof gear. I was happy to have Rockin’ there as she has been in a ton of storms in the Sierra and she knew what to do. We were up high and fully exposed so we hustled to a group of bushes Rockin’ saw that provided an excellent amount of protection. It was intense for awhile there as the storm moved in.

We were ready and huddled together behind the bush where it was amazingly calm dispute all wind going on around us. We had my tent ready to put over us if it started pouring. Then snow flurries started blowing horizontally so that showed how much the temps had dropped. After about 20mins of waiting, the storm thankfully turned away from us and we were completely dry…cold, but dry. The sun came out and it actually got warm. It was a wacky day for sure! I’d say we lost about an hour of hiking with all the prep, waiting, and then shedding of layers after it passed. We realized it was 4pm and we had almost 9mi to go to get to our hoped destination. We tried to push and hit more deep snow with plenty if postholing. Around 5:30pm, we stopped at a high point for a break since it had been a long day. I figured the two of them would be spent and ready to find early camping. Rockin’ said she just needed a minute to rest and then she’d be good to go for a couple more hours. Again, remember that these guys just started today and are at crazy high elevation trying to keep pace with someone who has been hiking for well over a month. As soon as we started our “break” the two of them started doing yoga and push-ups! Like a ton of push-ups! This is their new strategy to balance out their muscles. I just sat there eating a bar in amazement! They weren’t exhausted!? It was quite hilarious. 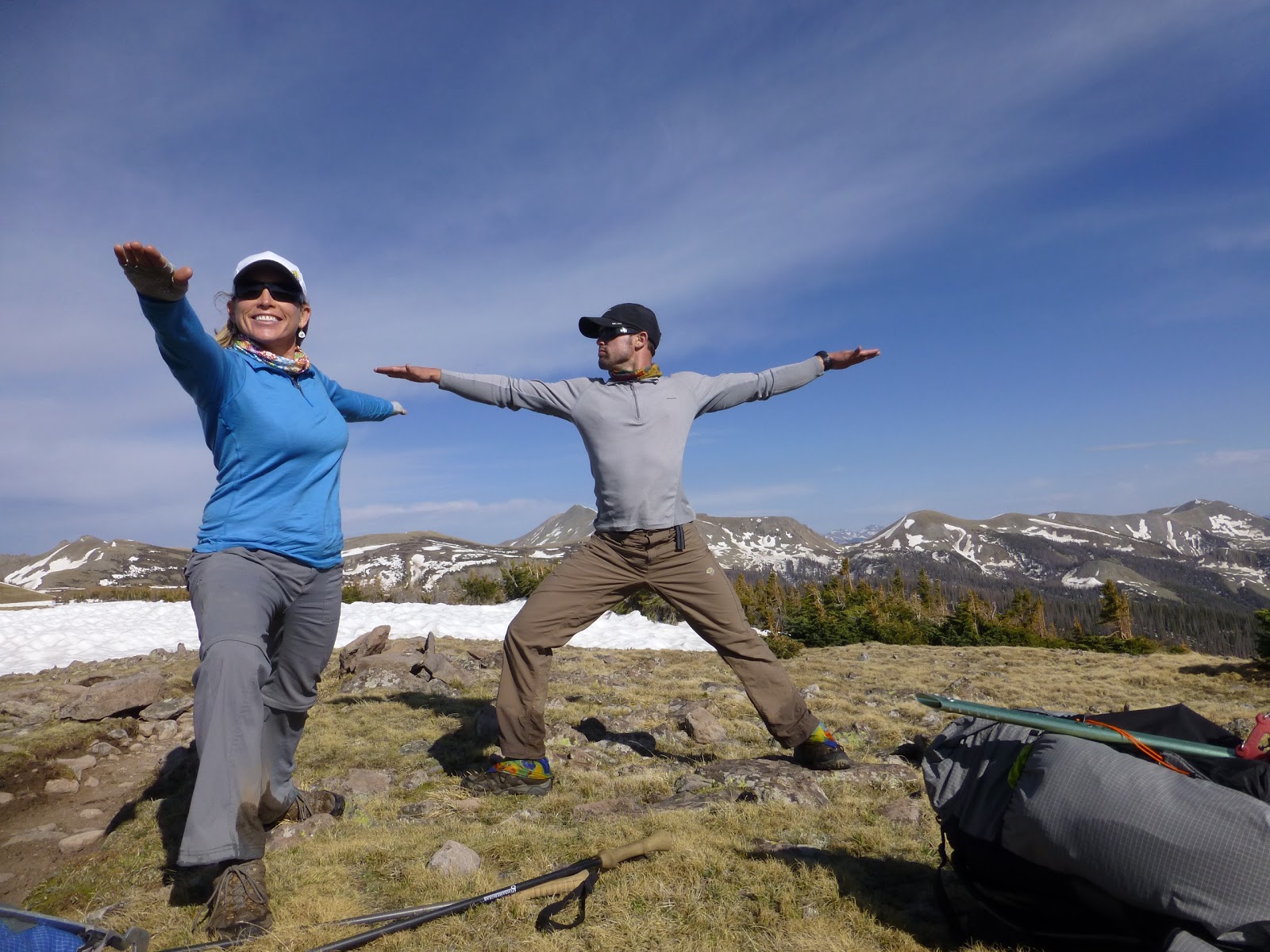 After the “break” we hiked on a finally hit some downhill, but by 6:30pm, we had to accept that we would need to camp earlier than hoped. We saw more snow ahead and the next 6mi or so were up high and very exposed. We ended up having to filter water from the water that was snow runoff running directly down the trail and we found some semi-flat spots to camp in some nearby trees just down from the trail. What a wacky first day for Rockin’ and Silly Chili. They are excited to get up early to hopefully walk on harder snow and get miles in early as storms may come again tomorrow afternoon. We are planning to start hiking by 5:30am, so alarms are set for 4:30am! Hopefully the plan works and we can do more tomorrow. There is so much out of our hands that I agree that the early start is a good buffer for anything we may incur.