This is just one of those frustratingly slow legs where everything takes longer than you hope and we are all drained. Rockin’ and I planned to leave by 5:45am and and that meant a 4:45am alarm. Ouch! I know we need to be getting up early because it helps to get across the snow quicker, plus Rockin’ is still adjusting to the altitude and moving a bit slower than her usual pace. I haven’t minded the slower pace because I am still recovering from my cough which had improved due to the inhaler(I think) and I’m having a rough week with cramps and exhaustion that comes along with them. The problem this morning is that I woke up at 4am with bad menstrual cramps. It was too late and the ibuprofen was no match for it. By the time I had to pack up and get out of my tent, my body was not having it and I started the morning off by throwing up right outside my tent. Not a good start to a challenging morning. We had Knife’s Edge first thing this morning. We weren’t sure what Knife’s Edge was, but we knew it was going to take awhile. We hiked up one mile towards the lake where we expected to see Silly Chili who hiked too far yesterday and we figured he’d camped at the lake. When we got to the lake, he was nowhere to be found, but his footprints were everywhere as though he had even tried to hike back to find us. We also saw fresh prints in the snow and they looked like his. We were surprised he hiked on and figured we’d see him up ahead.

When Rockin’ and I got to Knife’s Edge we saw that it was a looong steep traverse that had many sketchy areas with snow to cross. At first, it looked fine, but as we got closer, we found it to be much more intimidating. 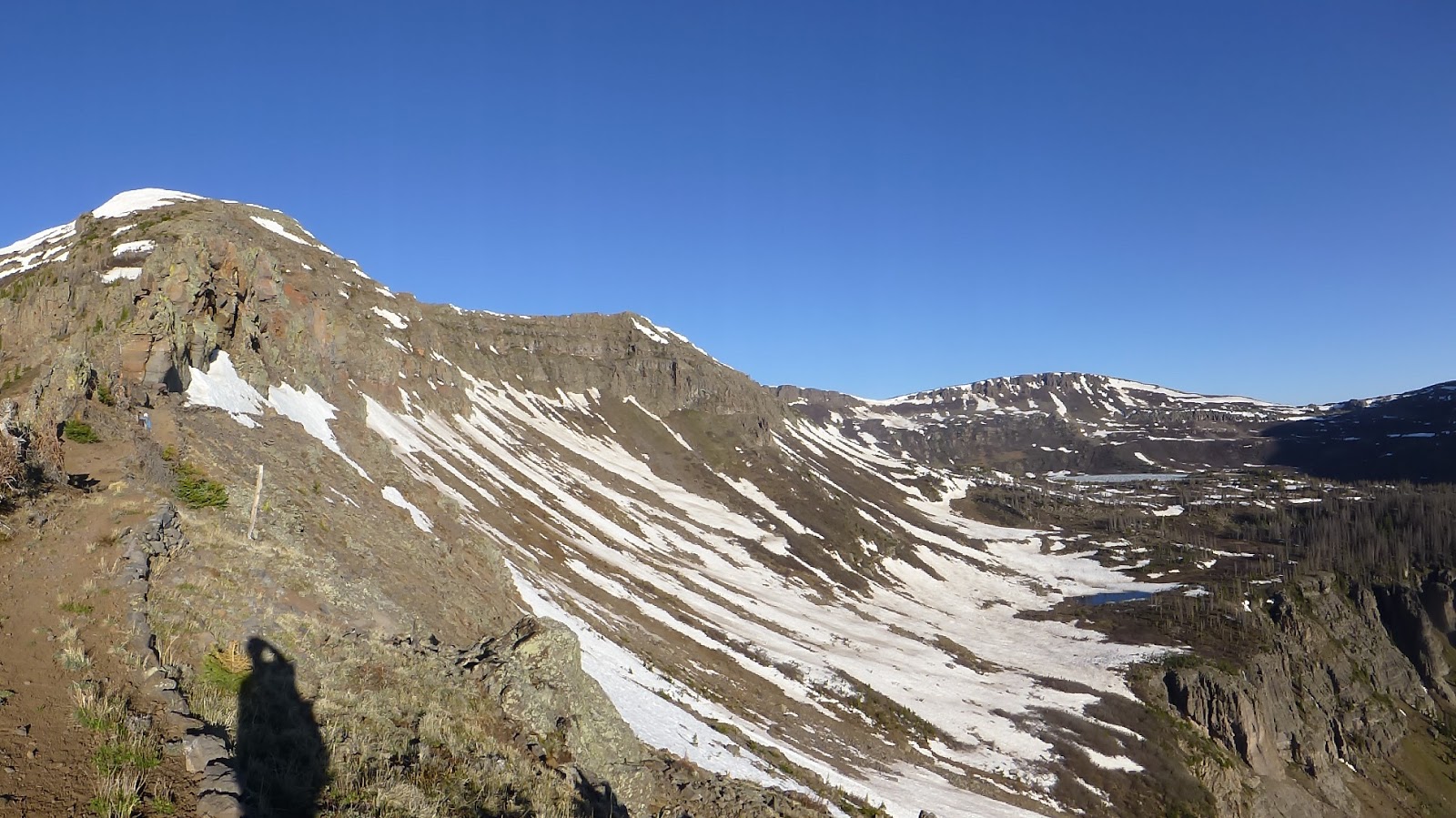 I am not a fan of heights or slippery traverses and this was both. We got our ice axes and microspikes out and Rockin’ took the lead. She was awesome at cutting steps! 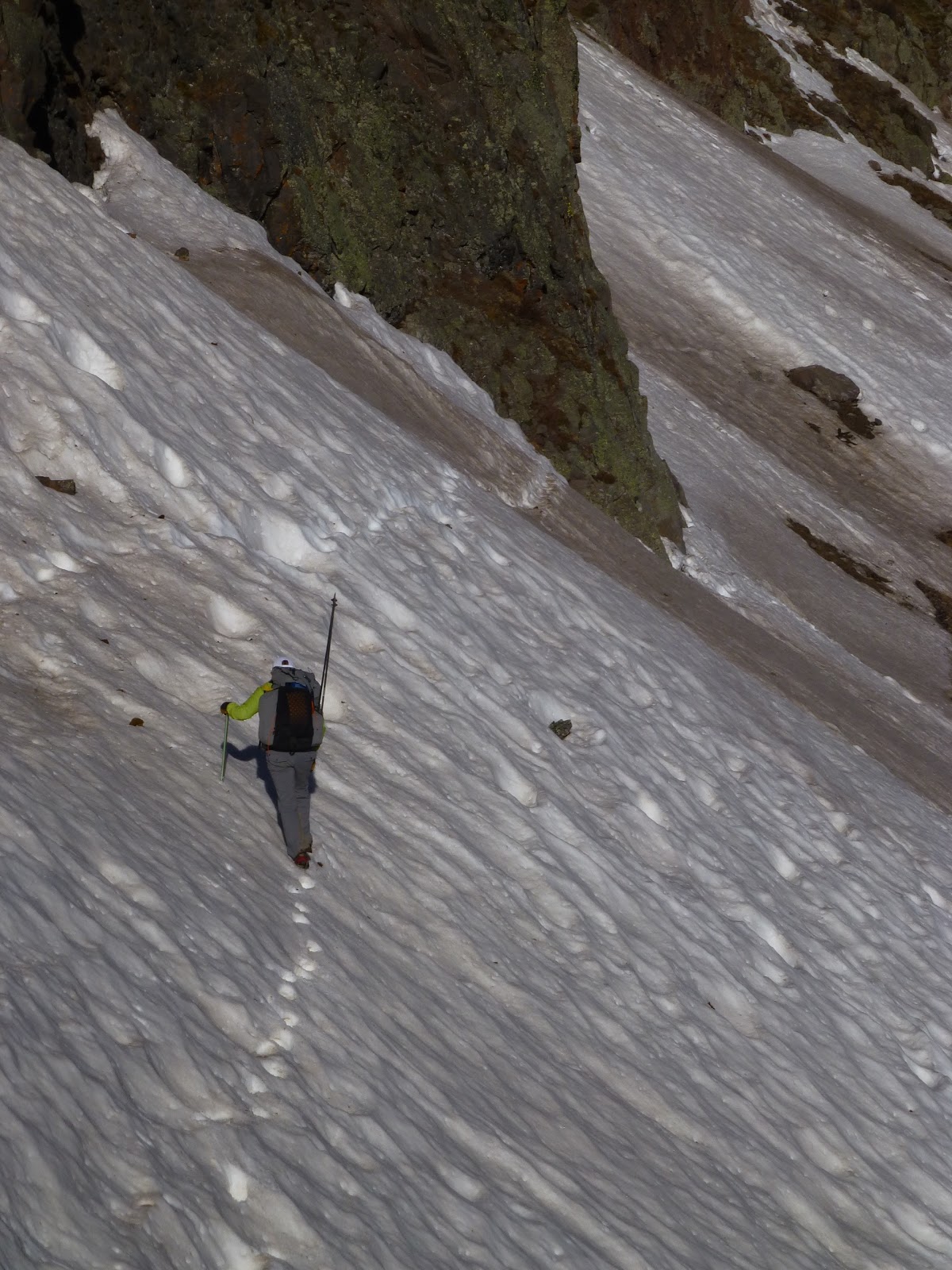 The Knife’s Edge took us forever and had little mileage to show for it and it was really tiring. We still didn’t see Silly Chili and were surprised he went through Knife’s Edge without waiting for us. Whenever these things happen, you try to think of what the other would be thinking and what they would think you are thinking…that was confusing, but you get what I mean. Just as we got to the end of Knife’s Edge, we could see the rest of the crew beginning it. As we got around the corner, there was another steep ascent so we took a break. We heard someone yell and Silly Chili was up at the top waiting for us. It turns out that he had thought we might take an alternate route to avoid Knife’s Edge and that’s why he chose to wait on the far side of it. Since he didn’t have a water filter, he chose not to drink and hadn’t drank anything since yesterday late afternoon. Rockin’ had extra water she was carrying for him and he drank.

Soon after that, we stopped at a stream to get water and the rest of the crew stopped there too. 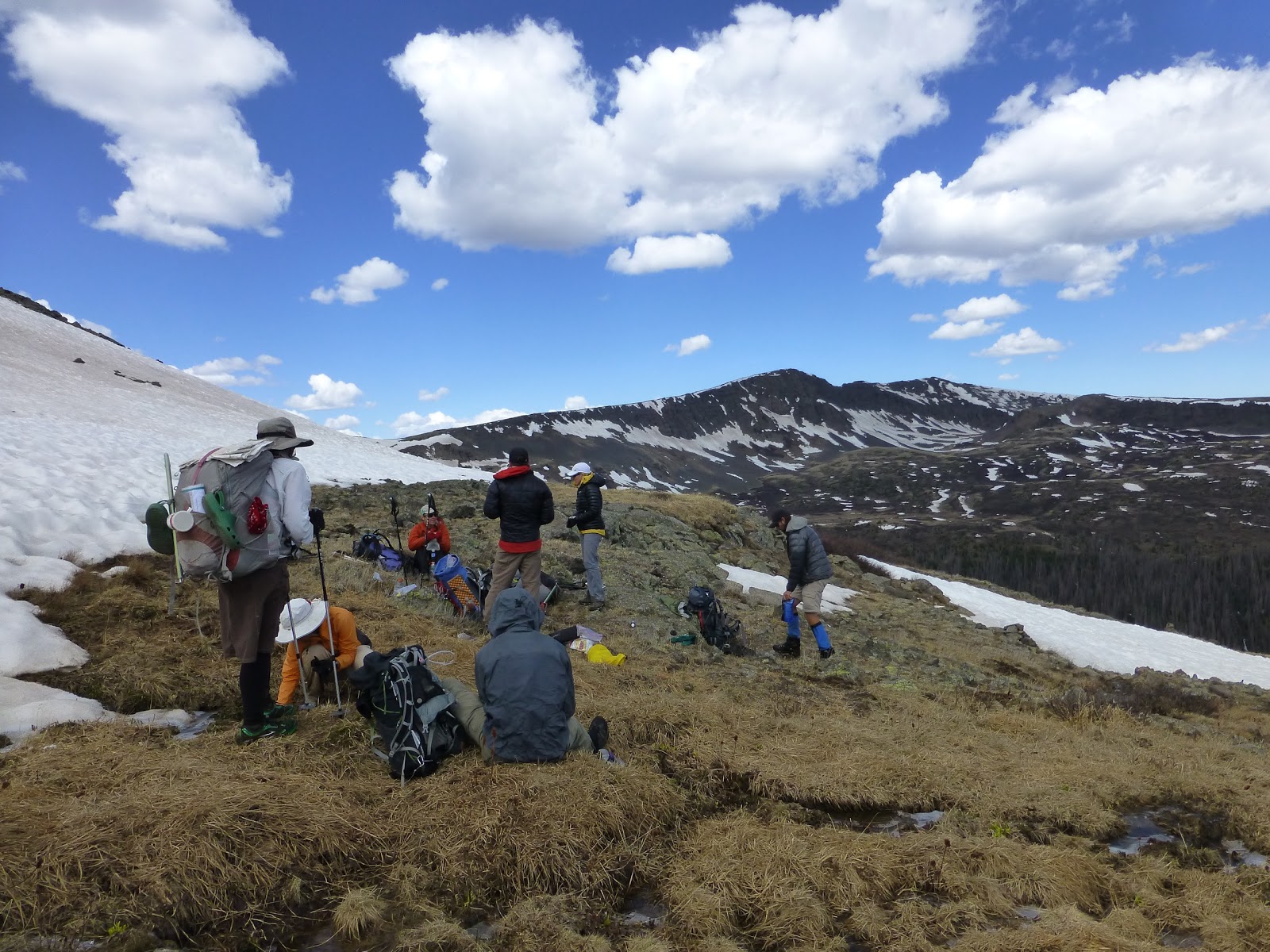 We all hiked together for a bit and finally got some clear trail and every time we thought it was clear sailing, we’d turn a corner to deep postholing snow! Here is LoveNote postholing. 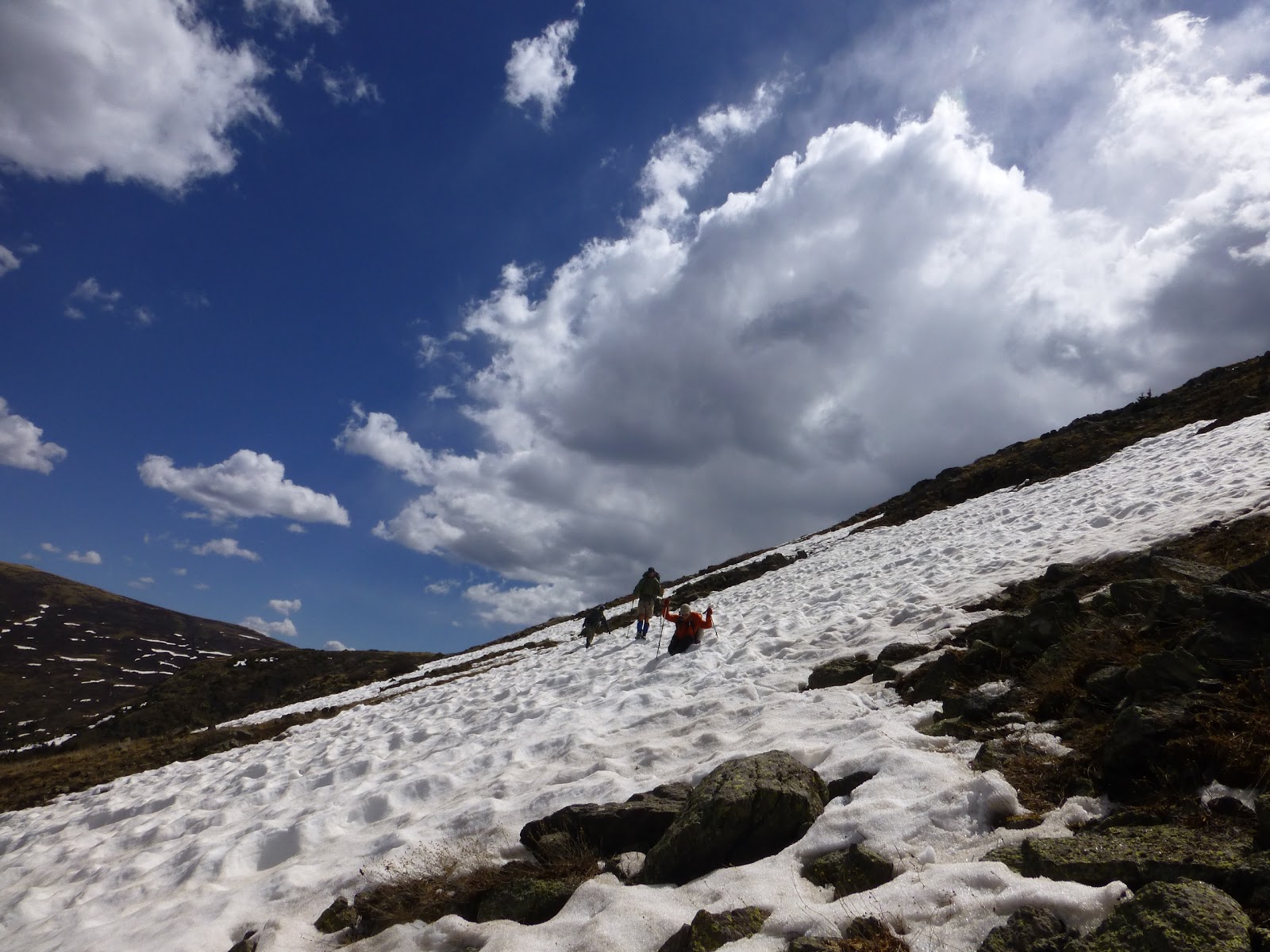 And Rockin’ and Silly Chili on another stretch. That just came out of nowhere when we rounded a corner. 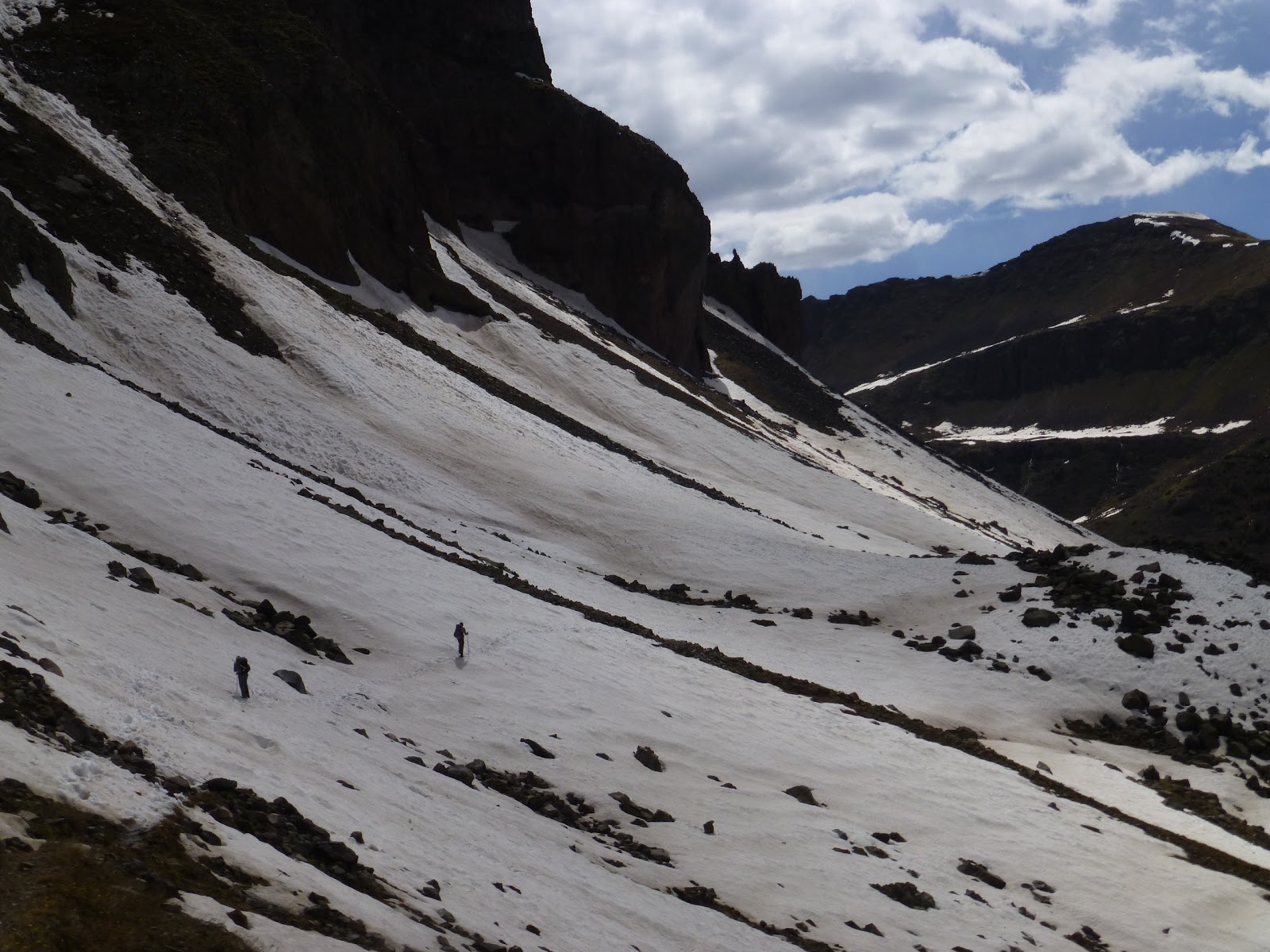 Then, we suddenly hit a cornice of snow that we had to get over. It was pretty cool, but time consuming. Here is a picture of Drop-N-Roll going over it in the orange and then Rockin’ going over with the paparazzi up top. 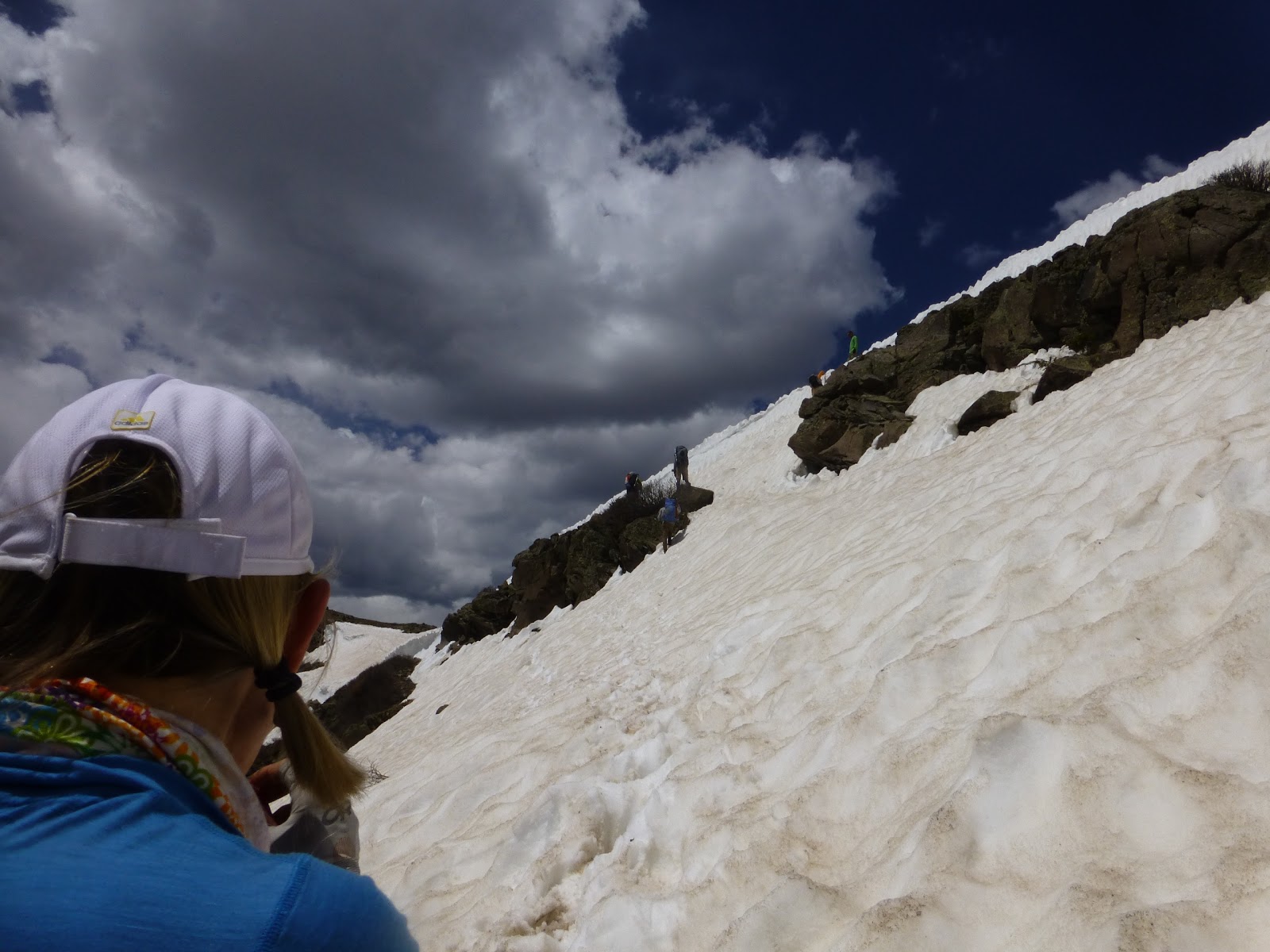 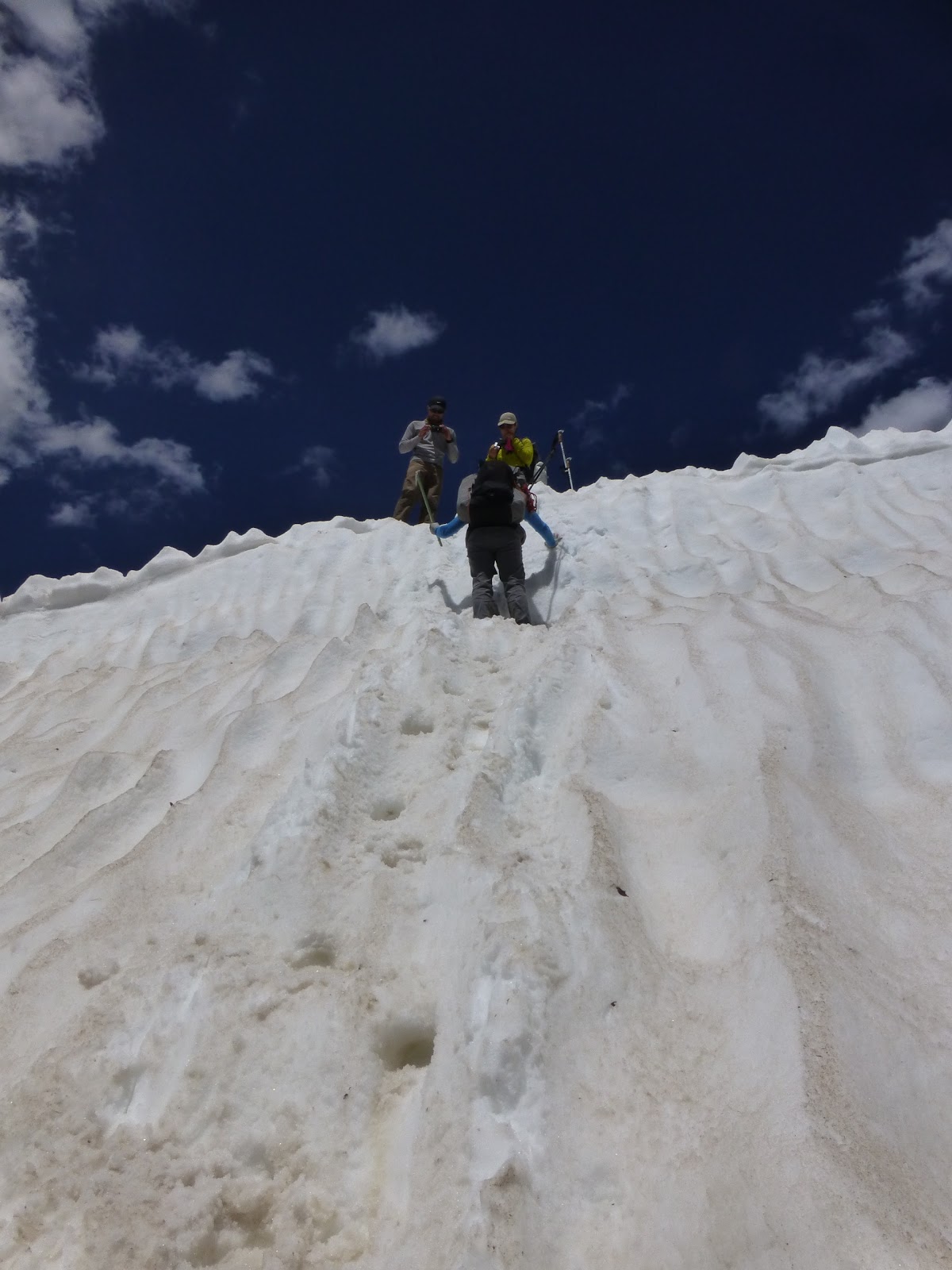 We had lunch at the top of the cornice while the crew moved on. We got some dry downhill for an extended time, but it was full of downed trees we had to climb over. It was also more of a narrow drainage than a trail. 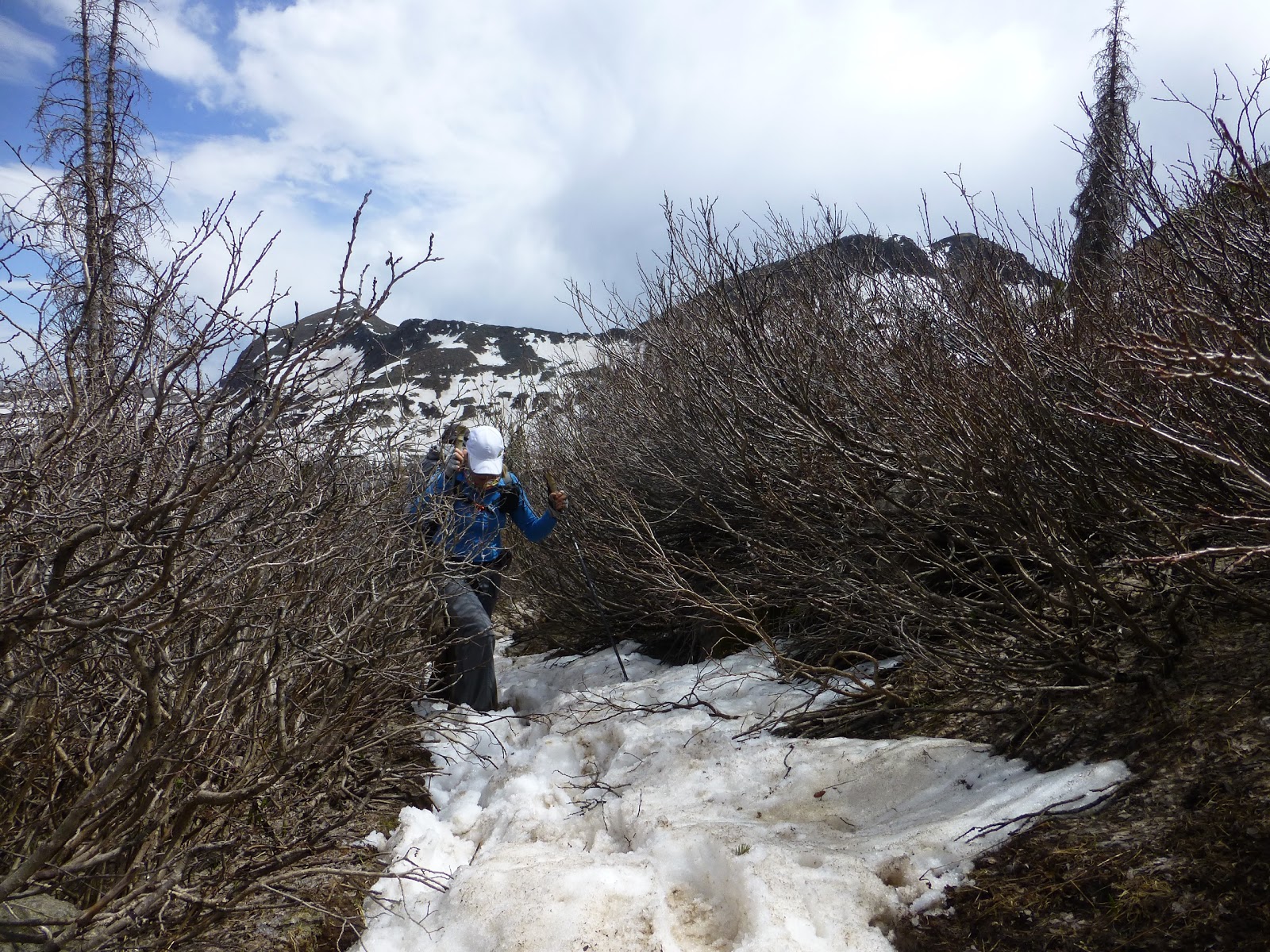 I am getting frustrated that we can’t get a rhythm going and just stretch our legs. We saw the group eating lunch at the bottom and they passed us on a snowy uphill. The uphills take FOREVER! With the way I was feeling today and the difficult terrain, it was one of those days where you could just cry from feeling crappy and exhausted. There were these little yellow flowers I noticed whenever there was dry trail. The bright yellow really stood out to me and I imagined they were like a happy and excited crowd cheering me on. Whenever I saw them, I imagined hearing a stadium cheering and that made me smile a bit. Here are my cheering flowers. 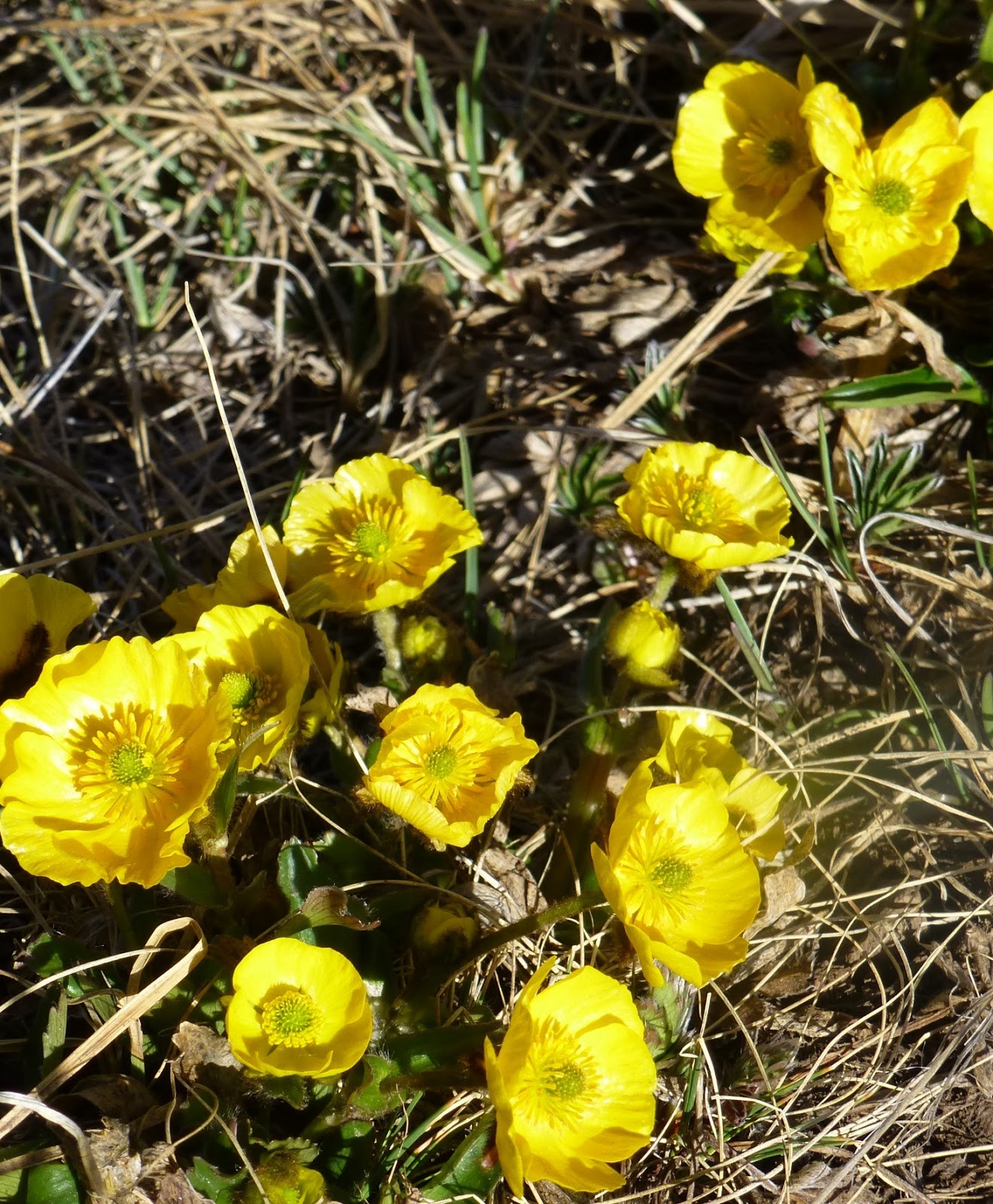 We got to a cool basin area that reminded us of the Sierra because there were lakes. Then we had another climb that took us up on the actual divide again. So awesome! 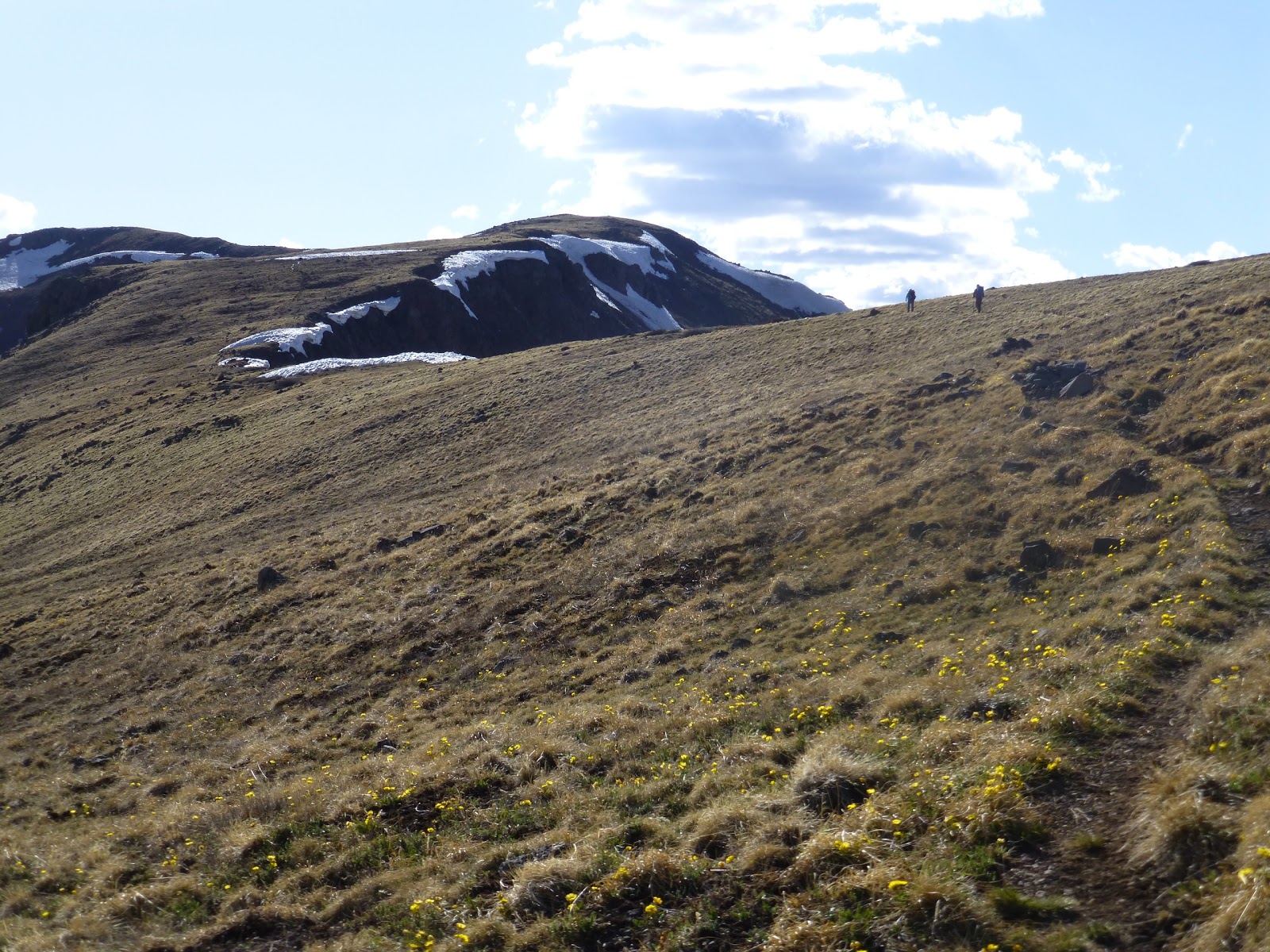 When we got up there and then dipped a bit, we realized it was past 6:30pm and it would be best not to try to push over the next uphill since we don’t know what the terrain is like. Our mileage was really low and it was demoralizing, but we did what we could. Rockin’ is doing awesome considering these are the toughest days we’ve had so far and the elevation is killer. This is my highest campsite this hike at 12,198ft. It’s not ideal to camp this high and this exposed, but we found a fairly protected area and the wind was really calm.

The sun kept us warm pretty late and now I’m sure it’s gonna be a cold night. The stars are awesome!