We finally got a day with almost no snow! I’d say about 10% of today had snow in it and it was only in small patches. YAY! We got up to leave by 5:45am and it was COLD! Luckily, it wasn’t windy, but the water in the Gatorade bottle inside my tent had a layer of ice in it. I was thankfully toasty warm all night and slept well. Poor Rockin’ had left her shoes outside her tent and they were frozen solid. It took an extra 15mins for her to try to thaw them out over her stove and that was just to get her feet in. They were like blocks of ice and she had to walk awhile before being able to even tie them. There was a lot of frozen over water on the trail this morning too. Here is a picture of Rockin’ in her frozen shoes on the icy trail. 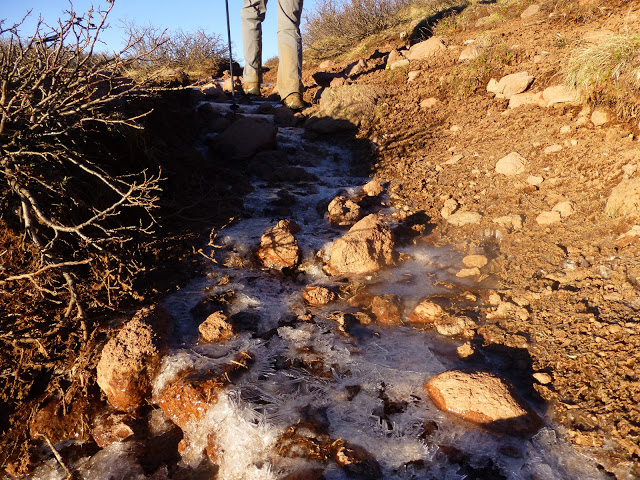 We had a short uphill that warmed us up and then we dropped the most I think we’ve ever dropped consecutively. It was almost 2,000ft and fairly gradual, so the trail was the first time we’ve been able to stretch our legs without interruption in quite awhile. It was dry trail and we dropped into a valley with many dead trees caused by beetle infestation of some kind. The trees looked like ghost trees and you can see all the fallen logs. 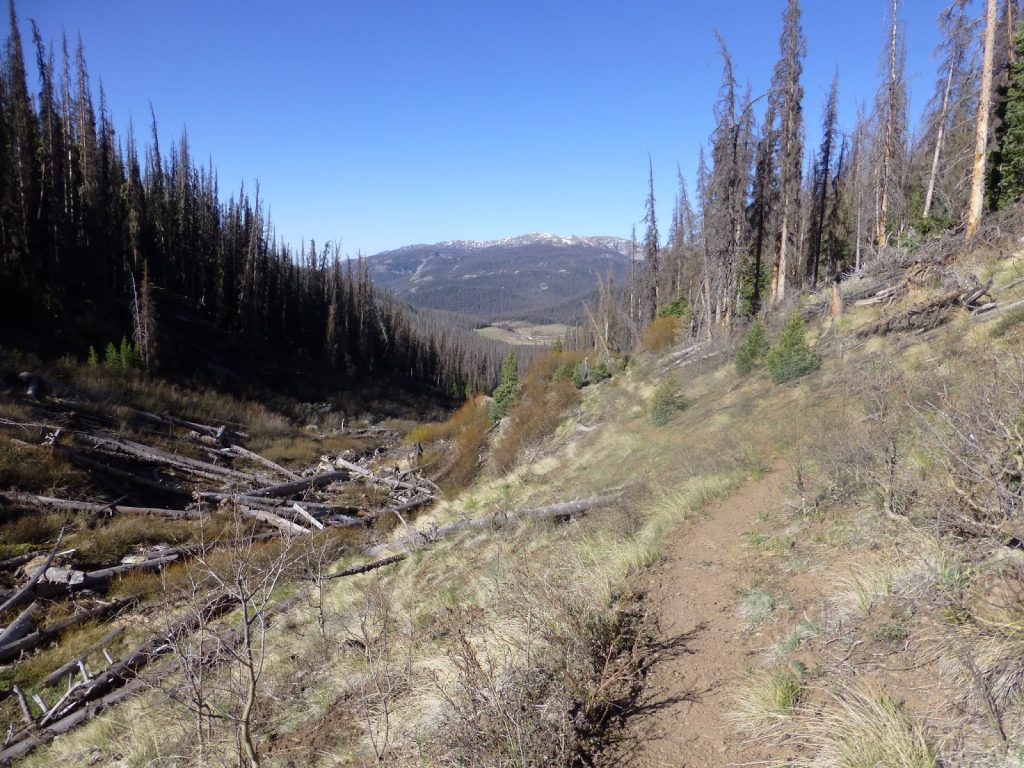 As we were cruising in the valley, we met a backpacker doing a 5 day loop and it turned out he grew up and still lives near the town I grew up in Southern Illinois. Turns out that his sister even worked at the mall in the sports store my dad used to own. Small world! He was even nice enough to give me an extra Mountain House as he was headed out today and had extra. Thanks John! After we saw John, Rockin’ and I got caught up in conversation and when that happens on the CDT, you are bound to lose the trail. Yep, we actually hiked at least a mile on the old CDT route. I am still kicking myself on that one cause I knew it was an odd turn this morning and just got distracted and lazy as Silly Chili was leading. We all took a deep breath and luckily the mistake was paralleling the actual trail, so we lost about 2mi we think. That was frustrating. We should have realized that as soon as we were on easy clear trail, we were in the wrong place. Our trail actually went back up the almost 2,000ft we had just come down. Argh. Thankfully, the uphill was clear of snow and gradual. When we got to the top, we had lunch and the real rewards of the day came the rest of the day! It was beautiful! Lakes, clouds, gentle winding trail up and down. There was rain, lightning and rumbling thunder I took so many pictures. Here are a few. It was great! There is even something called “the window” which is a naturally made hole in the rock that looks like a window. 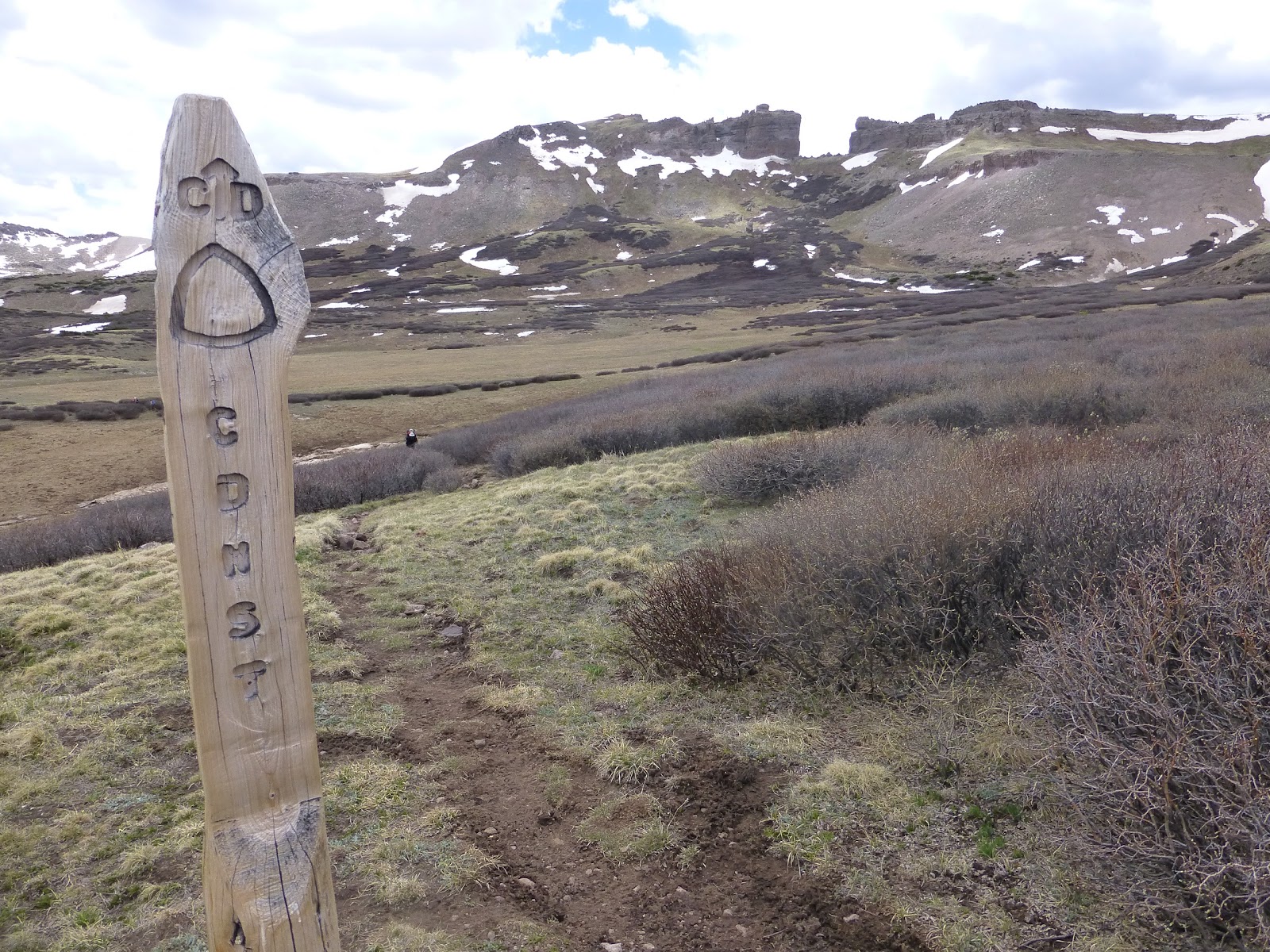 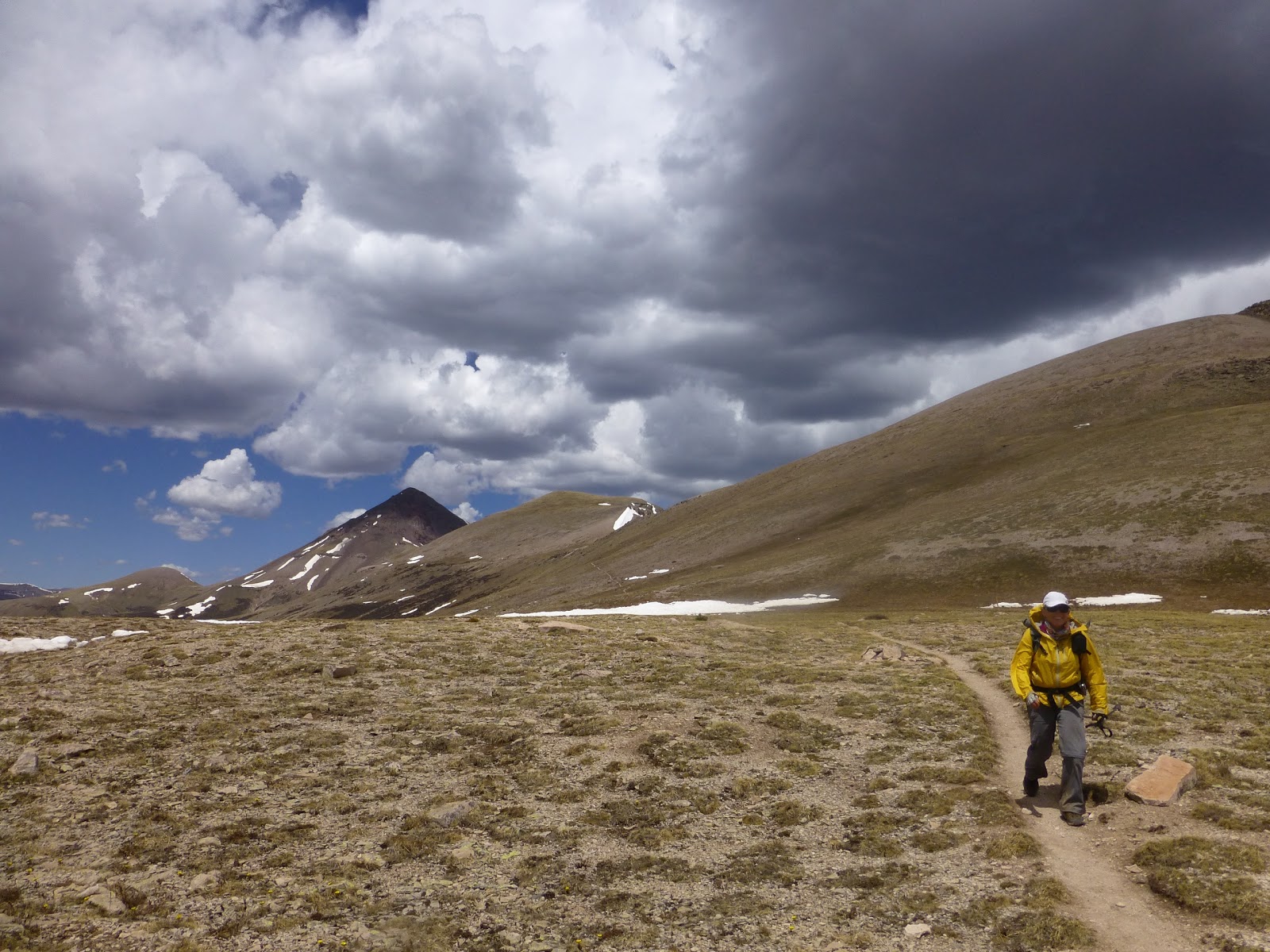 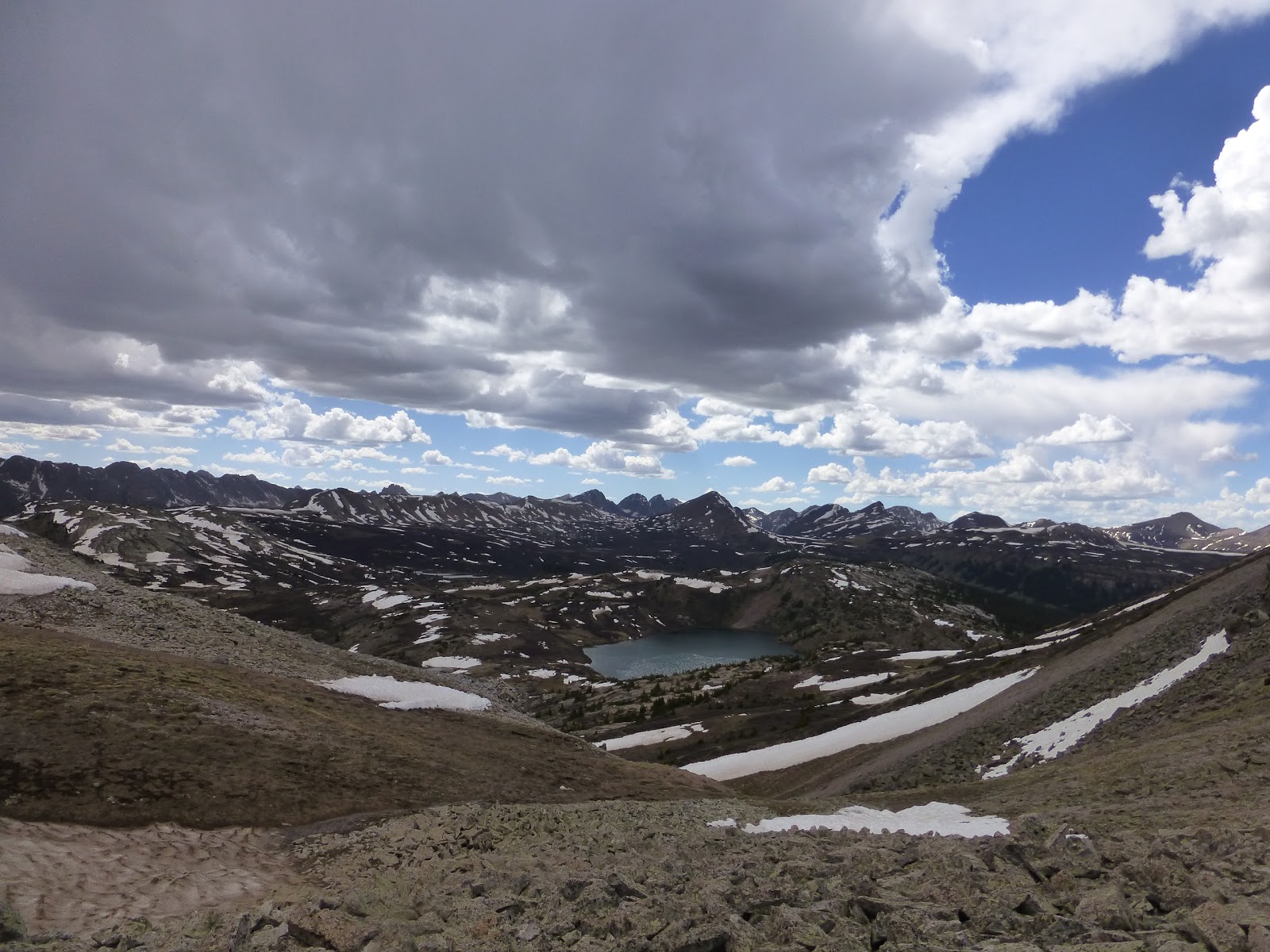 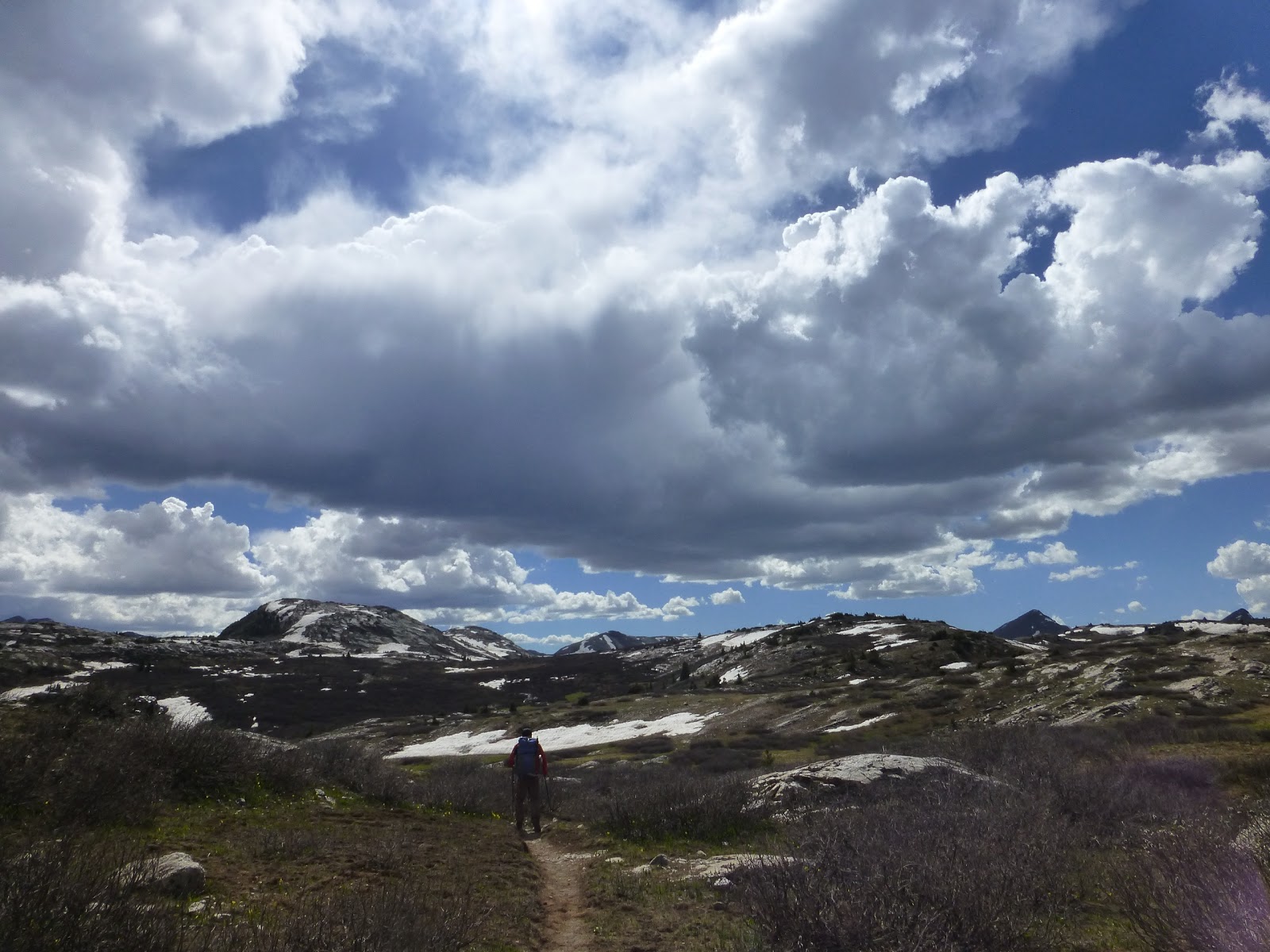 At the end of the day, we were in a forested area that turned marshy and I was in front. I rounded a corner to find a huge moose on the trail. My first ever moose sighting! He just stood there on the trail in the marsh staring at us. We knew they could charge, so we didn’t want to aggravate him. After a few minutes, he wandered downhill. So cool!

We are never able to pick camping exactly because some sections unexpectedly take so much longer than others. Ideally, there was a lake we would have liked to make it to that was at lower elevation, but we ended up stopping at a stream that was almost as high as last night. Again, the weather was really calm and temps weren’t that bad until after dark. It was a pretty cool spot and we could see everything we hiked today. We were on the other side of that range in the picture and hiked all along that and came from left to right. We could even barely see the window on the left just behind a hilltop. 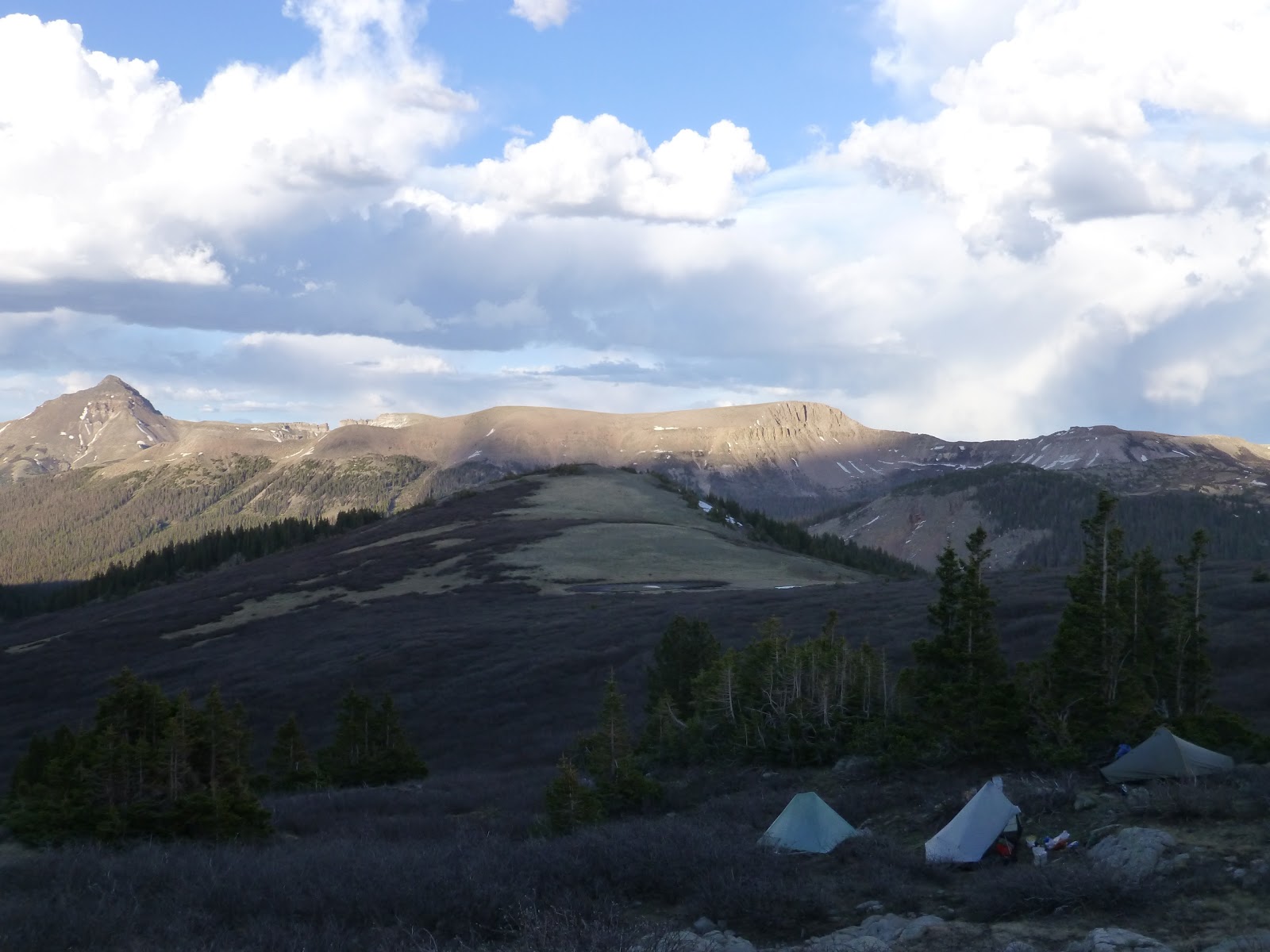 We didn’t see the crew all day. Our little detour this morning put us back at least another hour. We are leapfrogging with a couple named Rob Steady and Why Wait. They are camped just ahead if us now. Our mileage was over 20 today thanks to the lack of snow…and that doesn’t even count the extra 2mi detour we took. We are about 15mi from the pass to town…hopefully we’ll be sleeping in warm beds tomorrow night.