June 16th
Monarch Pass, US 50(937.8)-1mi North of Hancock Lake(954.3)
Campsite Elevation: 11,592ft
16.5mi
Today was a fun day. It started out with me and Rockin’ taking advantage of our continental breakfast at the hotel. Our last chance to fuel ourselves for the next leg. While we are, we asked around if anyone was headed down the highway to the pass about 20mi away. Unfortunately, we had no luck, so we made a sign and headed out to hitch. We thought it would be easy as we were already on the highway and right by a gas station. It took longer than planned, but about 40mins later, a guy offered to get us halfway there. While we were but hitching, we saw Bo was also on the street trying the same thing. Small world. We were dropped off halfway to the pass and stuck our thumbs out again. Fairly quickly a car pulled over that already had Bo and Sycamore(who I first met in Pagosa Springs) in it! The woman driving was named Bonnie and wasn’t even headed that way. Her intention was to take Sycamore a mile or so until they saw Bo and then us. Then she decided to just drive us the whole way. So nice. Here is a collage of the whole process. We all barely fit in the car with our packs on our laps. Notice the dog between Rockin’ and Bo. There were actually two dogs. Quite a carload! 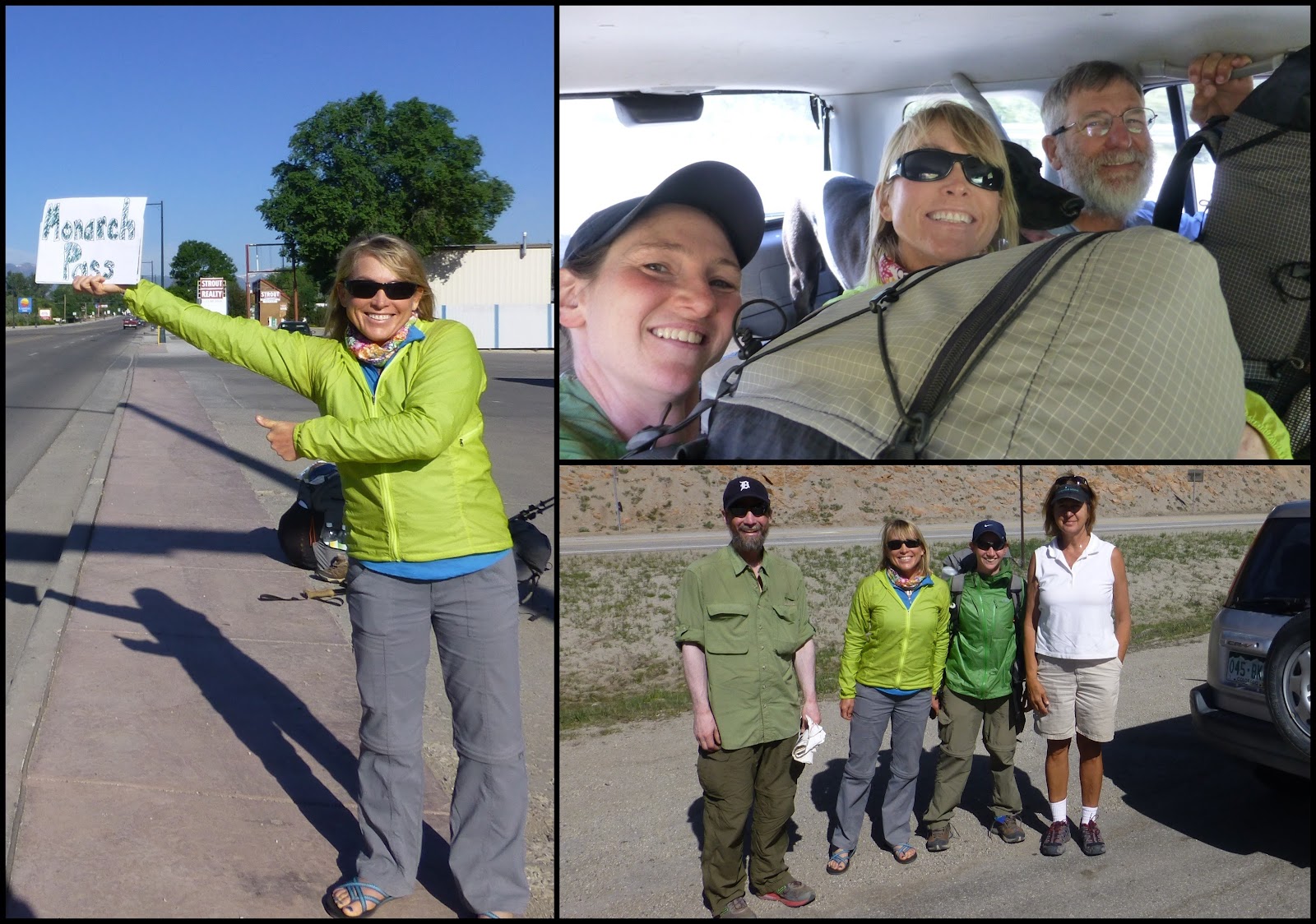 When we got to the pass, some of the rest of the crew was there and soon the rest arrived by another hitch. Silly Chili will leave tomorrow and catch up to us because he has to wait for his online course to release his assignments at midnight. We had 11 hikers leaving the pass all within a 30min window. Sycamore and Bo went on ahead first and we didn’t see them the rest of the day. Bloodbath and Rampage also went on ahead speedily. That left me, Rockin’, LoveNote, Ninja, Drop-N-Roll, Stryder, and Sweetfish. We hiked together at a relaxed pace as there was a lot of elevation. We started out on a road and then long traverses uphill with strong winds and gathering clouds… 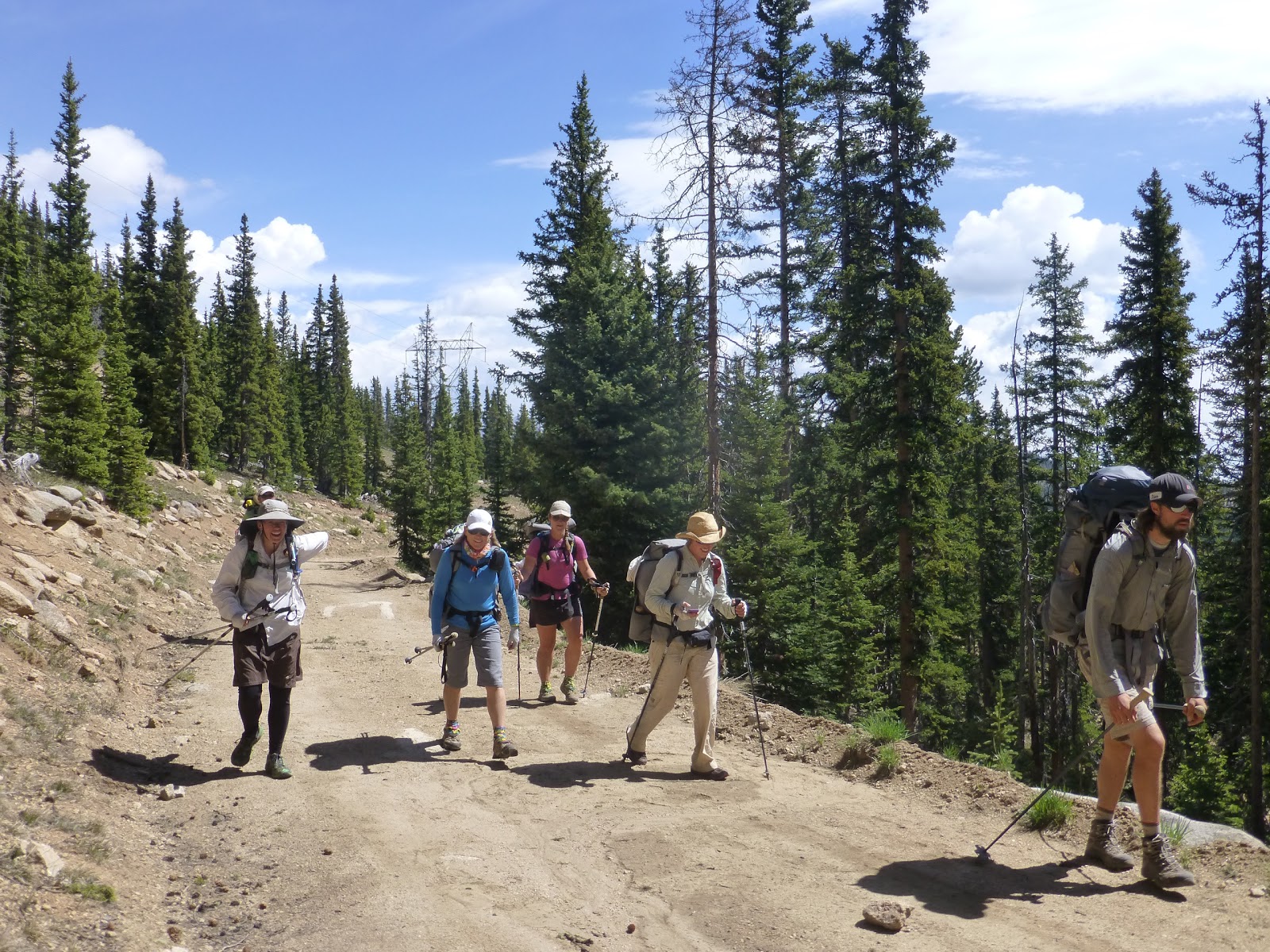 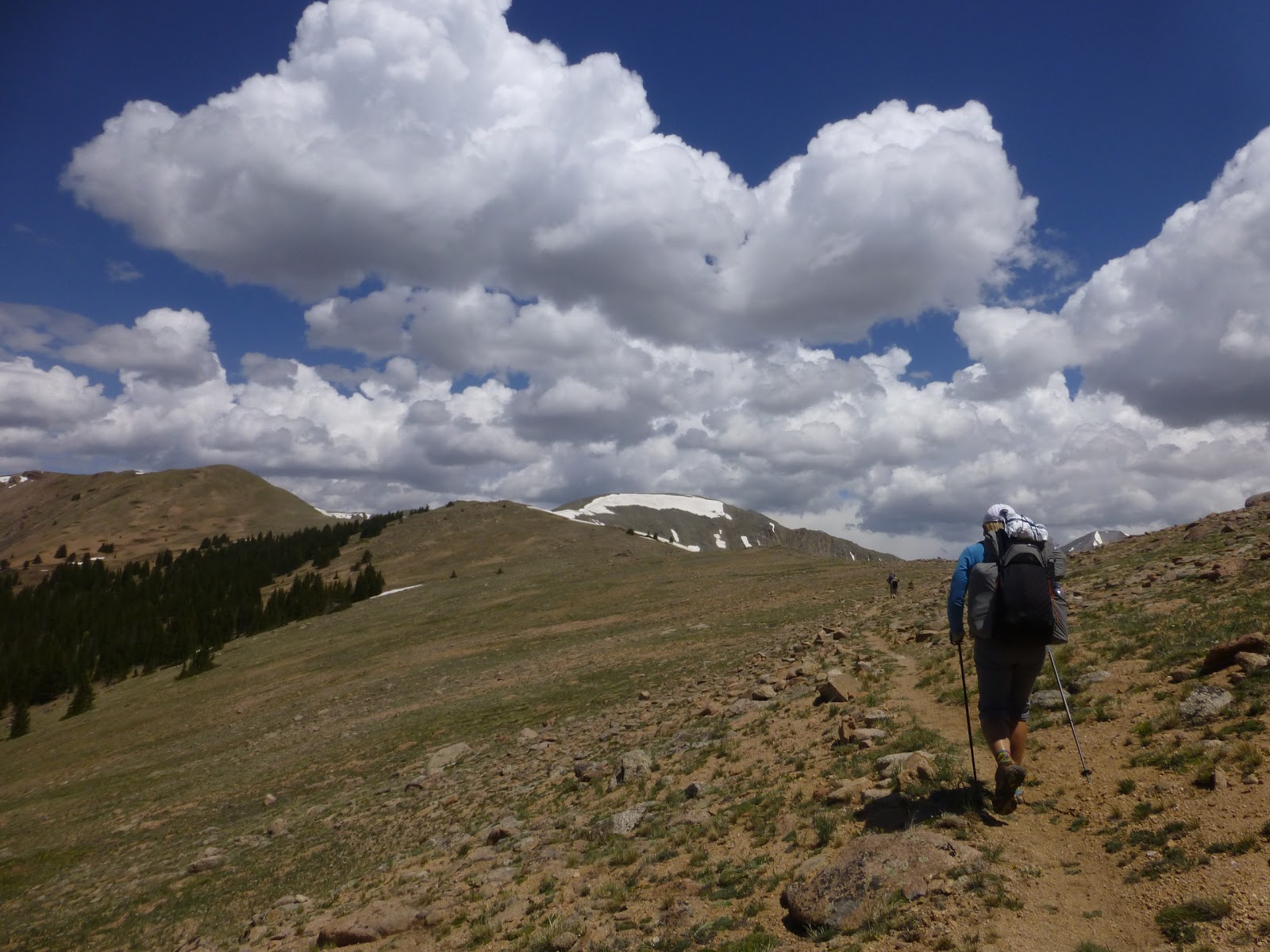 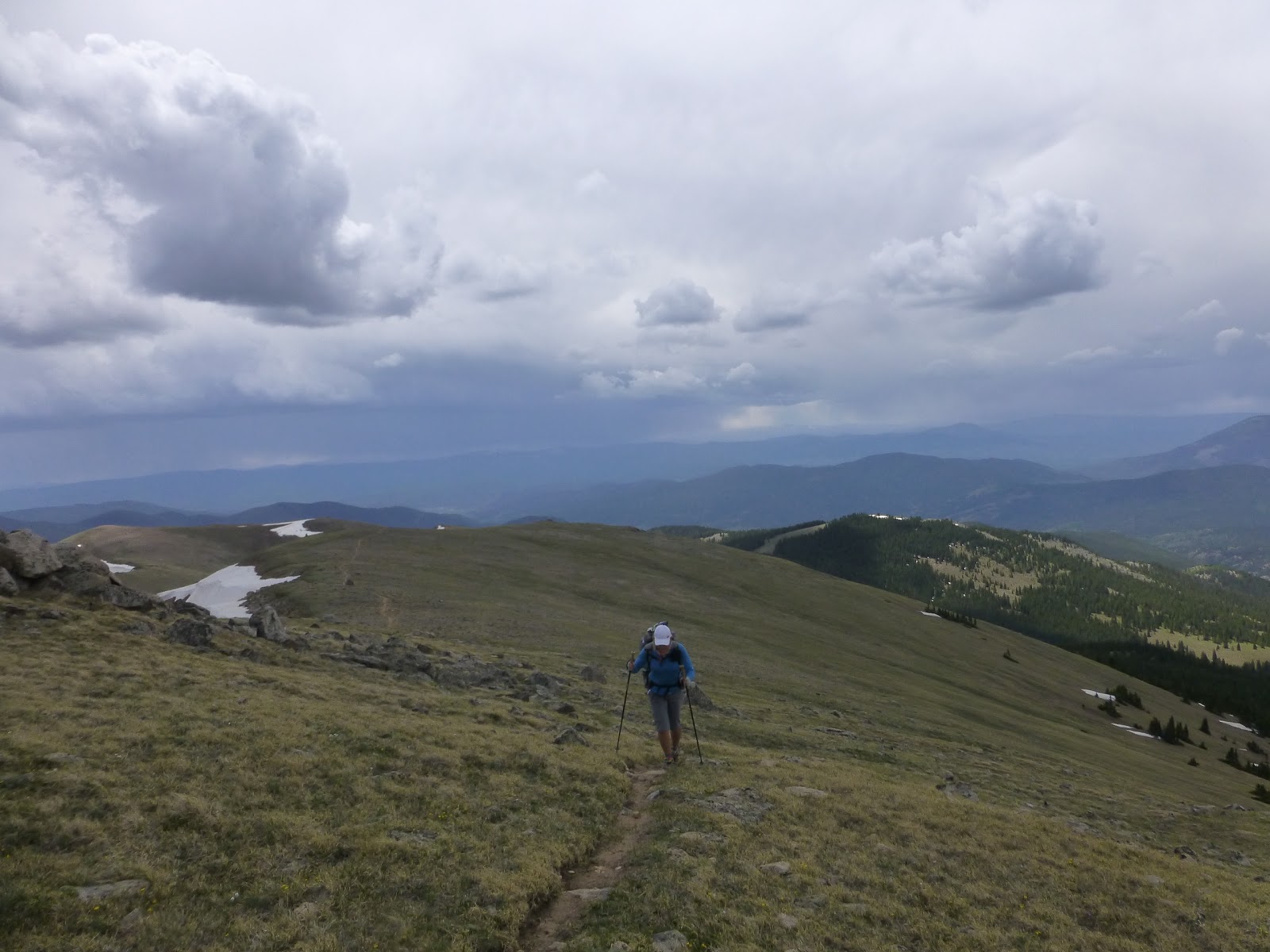 We all stopped for lunch once we could get somewhere sheltered from the wind. We had climbed over 1,000ft and were around 12,400ft. Lunch ended up being quick with rumbling thunder getting closer and skies getting darker. 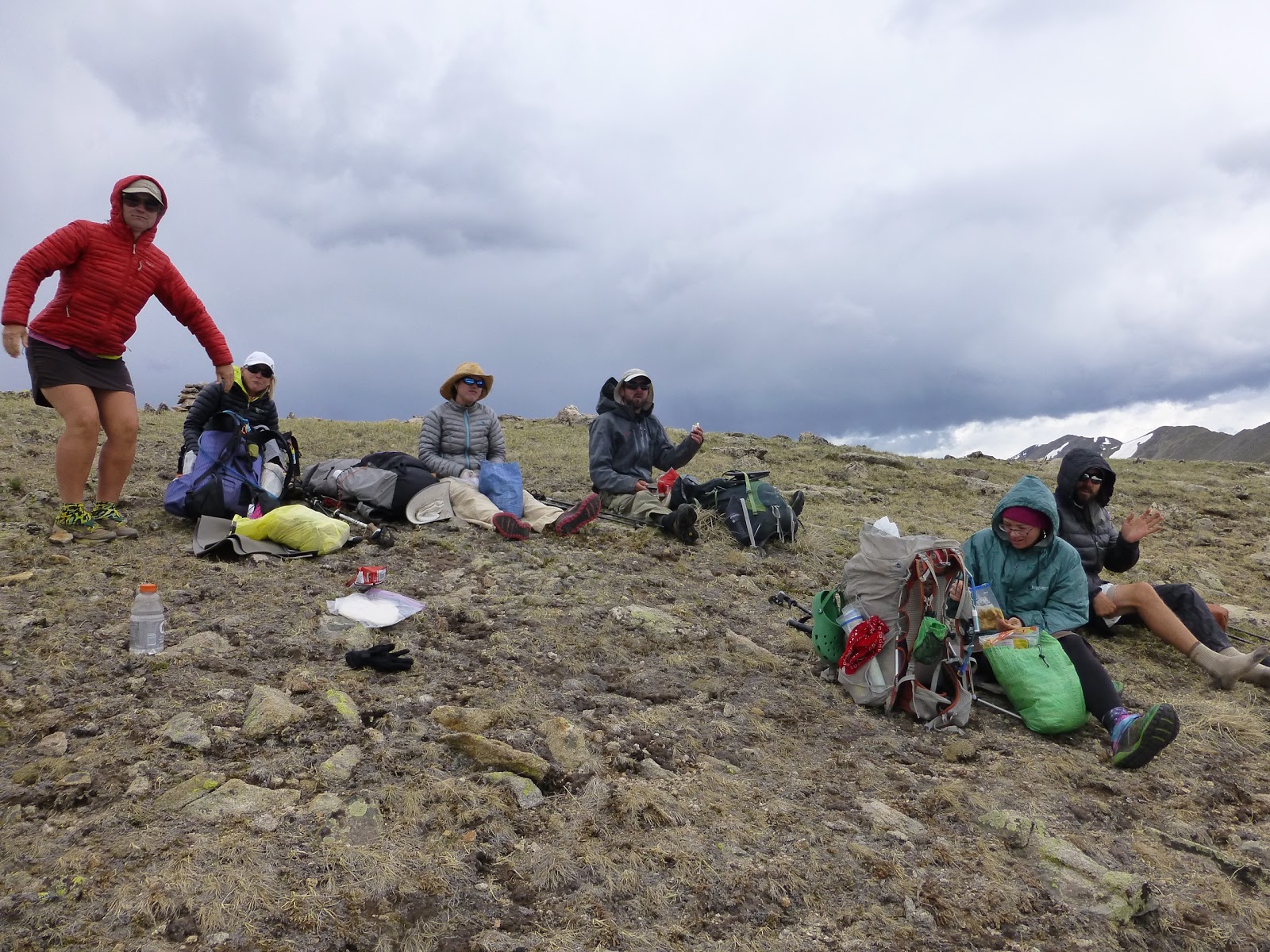 We got the rain gear on and sped over the last hill knowing there was some downhill a couple miles ahead that would take us into the forested area at a lower elevation. 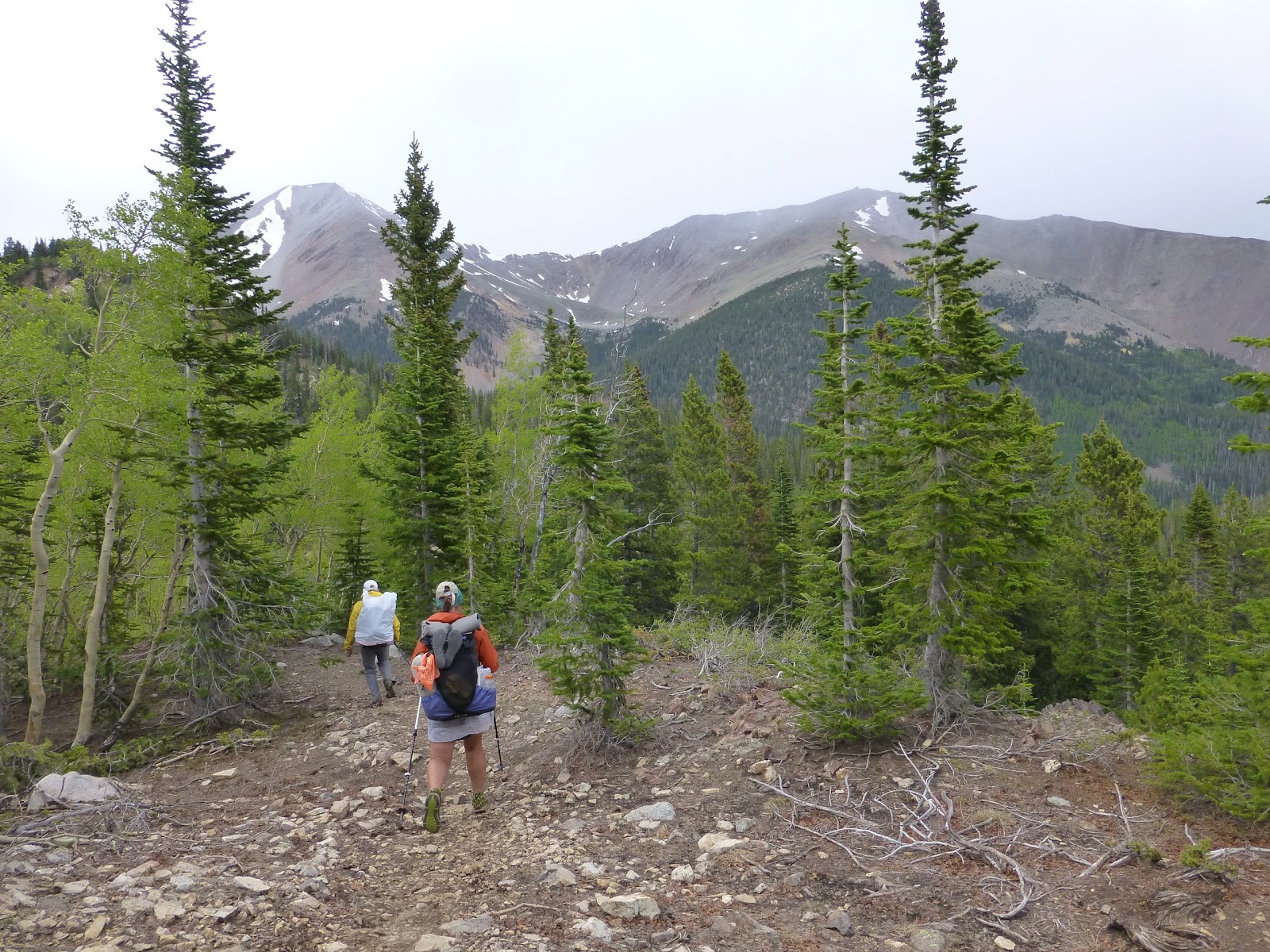 It actually started to snow on us as we dropped. It’s the middle of June and we are getting snowed on. This Colorado weather is so random. Once we dropped down the temps got warmer and we spent the next couple hours putting rain jackets on and off as it would rain for short periods and then the sun would make an appearance. It was actually quite nice out despite the on and off rain. We soon came upon Bloodbath and Rampage who were taking a much needed break. For some reason, out of nowhere, Rampage got hit hard with altitude sickness when they were up high. She was disoriented and even tried to walk off the side of the hill knowing she needed to get down. Fortunately, they were able to get down safely and had some meds for helping with altitude. It just shows that even though we’ve been going high for awhile now, our bodies can still react badly to it. I coughed quite a bit the first half of the day despite using the inhaler, but it improved as the day continued. Rockin’ and I hiked on to get over the next pass which ended up being really long. Again it rained on and off a bit. When we got to the top, the rest of the crew also caught up and so did Bloodbath and Rampage. As soon as we started to descend the dark clouds rumbled and even echoed off the mountains. 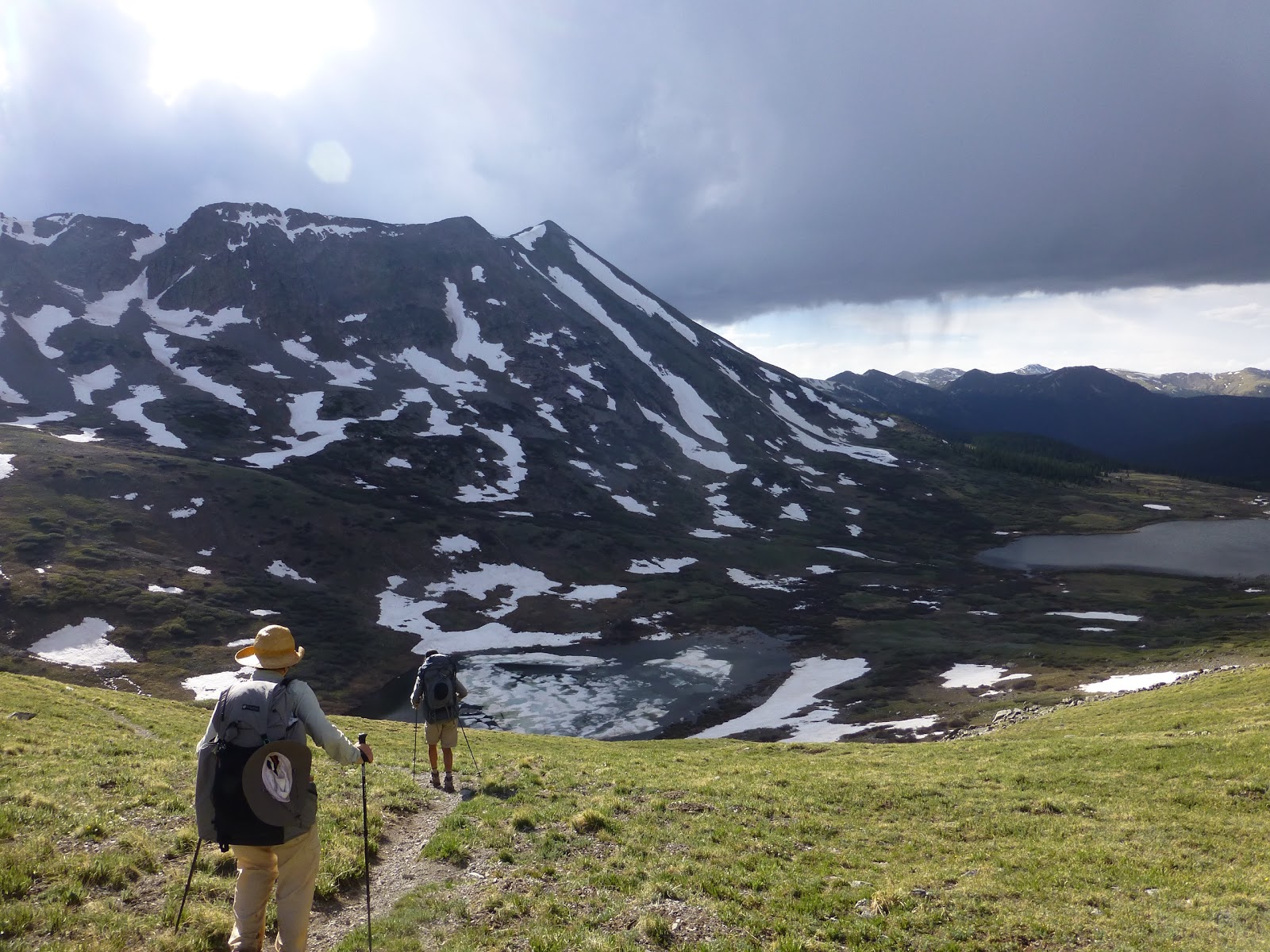 It rained steadily and we planned to stop as soon as there was a good protected spot. About 30mins later, the 9 of us hiked up on a great campsite and the sun broke to reveal a faint rainbow. Somehow we were able to fit 8 tents in there! 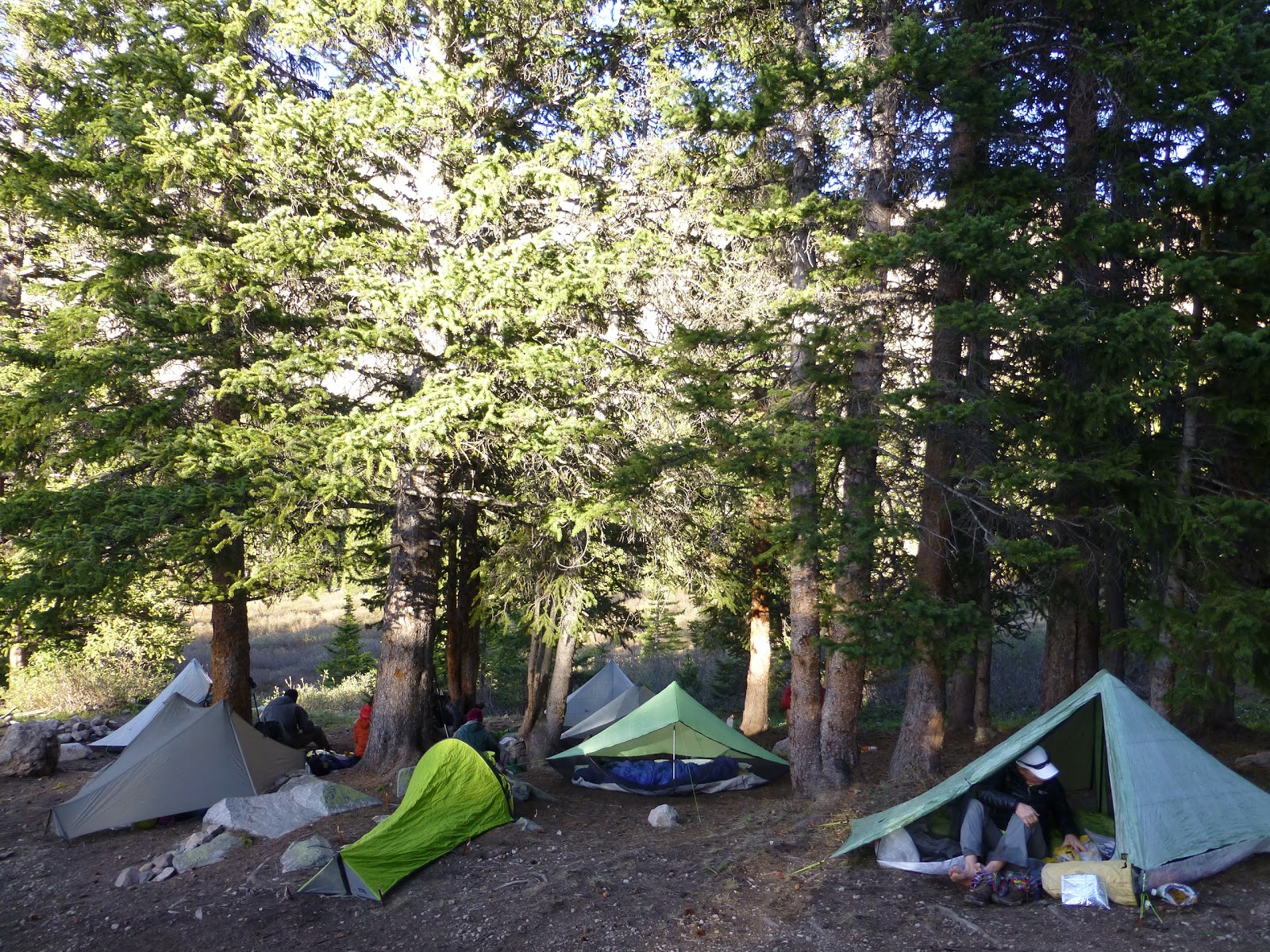 It cleared and then gathered again around 9pm when there was more thunder and rain for a bit. The temps dropped and it feels like it’s below freezing. Rampage is feeling better and doing okay thankfully. It was fun to have all of us in one campsite and now everyone is silent as I write about our hiker slumber party. This group just has great people in it and everyone just works together seamlessly. We are really fortunate. I’m sure we will spread out more tomorrow, but it was fun to overlap for awhile again.