June 17th
1mi North of Hancock Lake(954.3)-Cottonwood Pass Trailhead(980.3)
Campsite Elevation: 10,794ft
26mi
Another great day! Last night it rained a bit and even had a period of little snow/hail pellets, but nothing strong. We woke up this morning with the lofty goal of 26mi to Cottonwood Pass. We wanted to get to the pass because we had the incentive of possible trail magic. A man named Michael and his son are driving cross country from Indiana to kick off their month long trip to numerous parks and backpacking. They follow my blog and the timing is working out that they could take an alternate route to hit us at the pass tonight. We were motivated! Rockin’ left around 5:45 and Ieft at 6:20am. I had a rough start as I was feeling the elevation when I woke up and when I held my breath to take my inhaler, I got really dizzy and almost fell over unexpectedly. We know Rampage had difficulties yesterday and wonder if there is added pressure from whatever weather front has been coming through. Everyone else was getting up as I left. I wasn’t hungry and tried to eat as I hiked and my gag reflex activated and I threw up. I gave it another 20mins and tried to eat again with better results. It was a COLD morning and the trail dipped down a bit and it was even colder down below. Even though it’s Monday, I saw people camped near cars with ATVs. A car even drove through on what I thought was a remote road the trail follows. I guess now as remote as I thought! About 1/2mi from our campsite, a big container of sodas were left for tru hikers. Great place to put them and they were left by Liv, who hiked the trail in 2011 and hosted Silly Chili and some other hikers downtown in Salida. I don’t drink soda, but it’s just cool to see the support for the hikers. Thanks Liv! I really enjoyed the hiking this morning and taking it in on my own. We hiked up toward a pass on a unique trail that used to be a really old railroad called the Old Alpine Tunnel Trail. 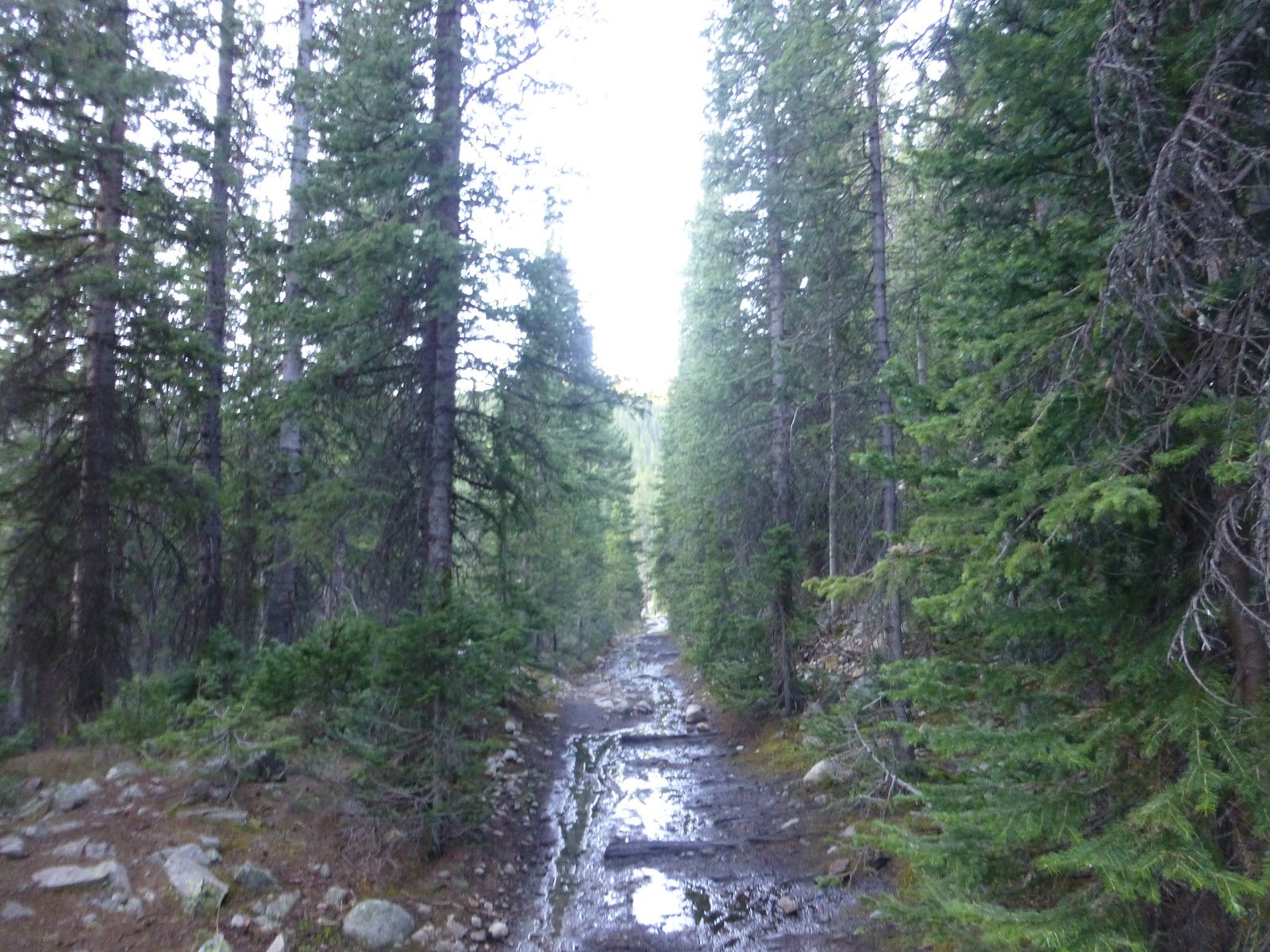 We had three passes today that went over 12,000ft and we felt the effects on all of them! I caught up to Rockin’ at the top of the first pass which kicked our butts and I was happy to see she was hiking up with Sycamore. I like this picture of them at the top of the pass and especially like the Rockin’ is sitting on a rock. 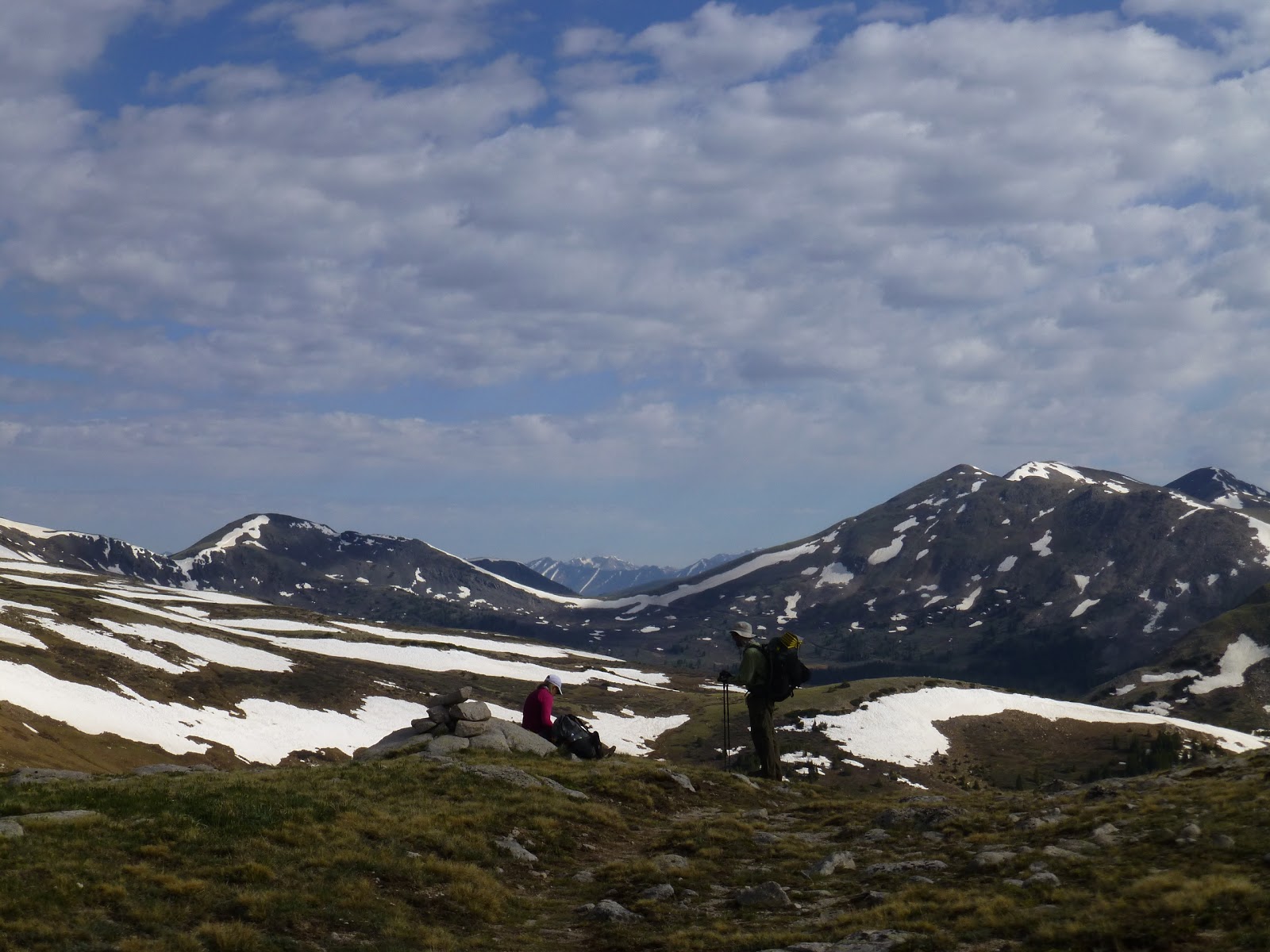 Sycamore slowed down and hiked with us a couple hours and was great company. We got snowed on for 10mins out of nowhere(weather is so odd up here!) and the rest of the crew caught up on the next pass. I got a great photo of everyone going over the snow traverse at the top of the pass. There are few patches like these up high and nothing significant with the snow now. 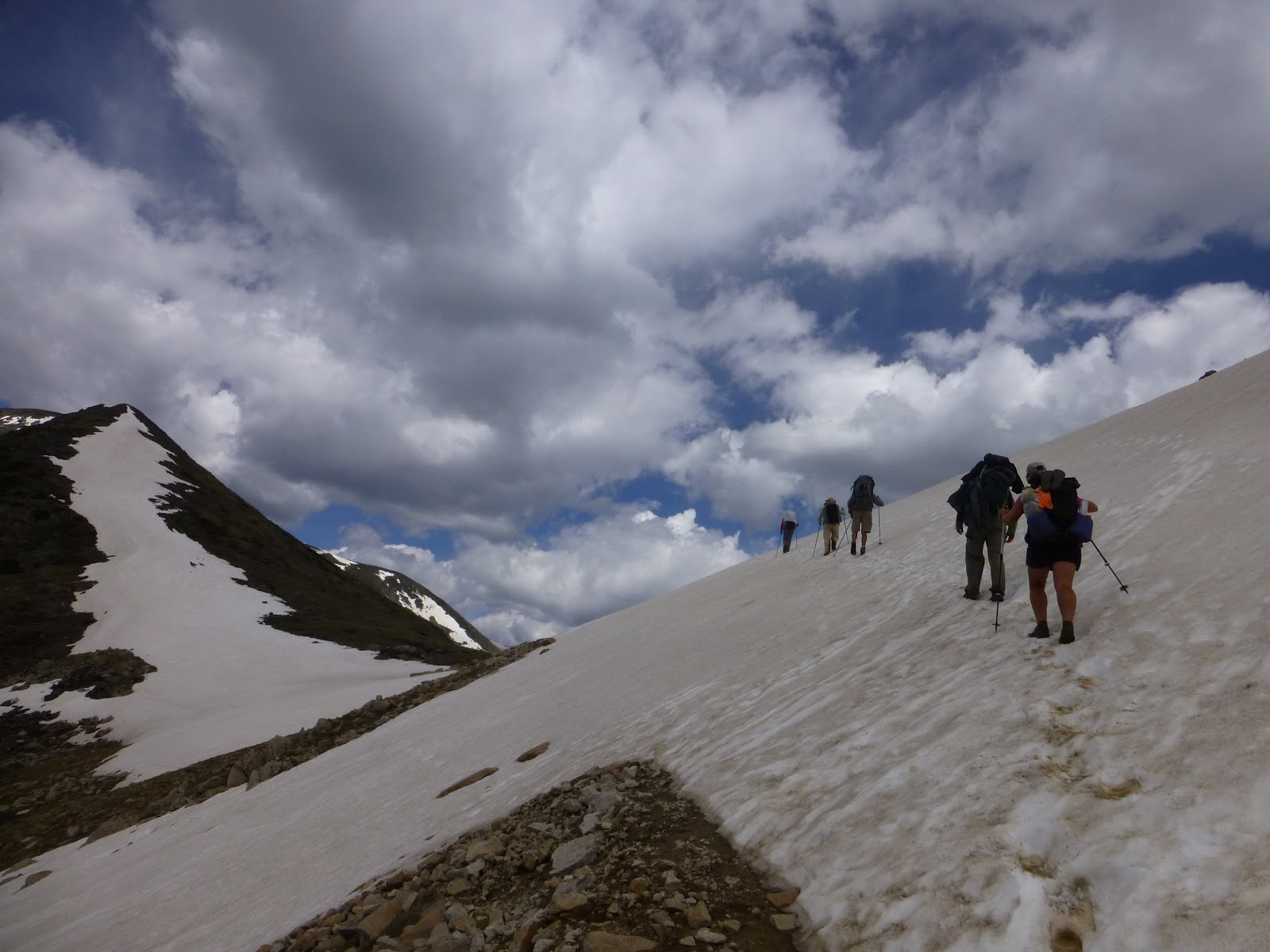 The second half of the day we walked on forest service roads and it was covered in people on ATVs. I’ve never seen a place so busy! Apparently we were near an easy access point. 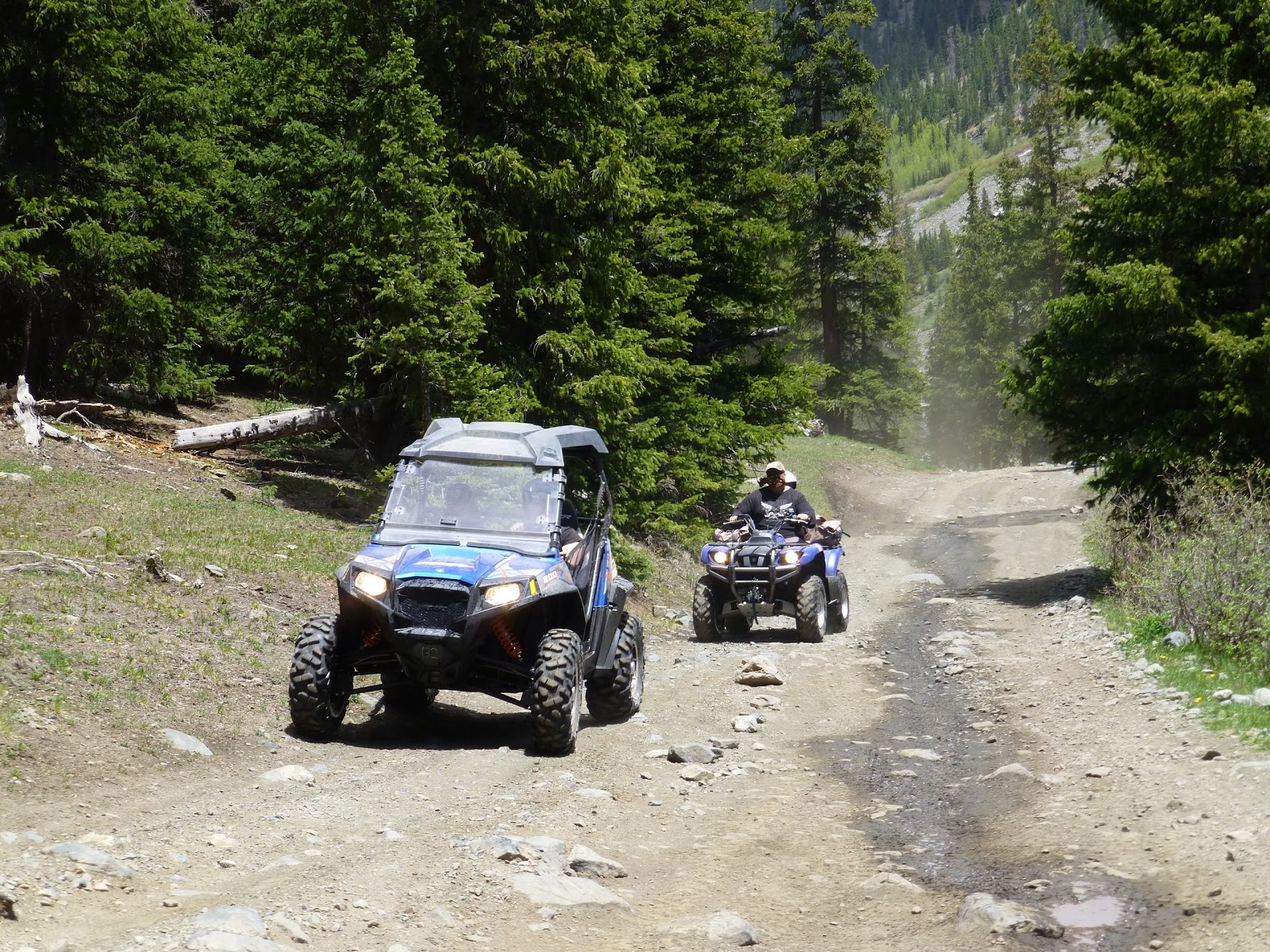 The goal was lunch at a lake that had bathrooms and a picnic table, so we ate with the crew. Just before lunch, we passed the Matteson family who we had seen at the pass two days ago. They just started their section hike recently and are doing lower mileage to ease in. By the time we finished lunch, it was 2pm and we still had 11mi and another long uphill. That’s when everyone spread out and went ahead of me and Rockin’. At the top of the pass was a cornice and you can see the lake we had lunch at. 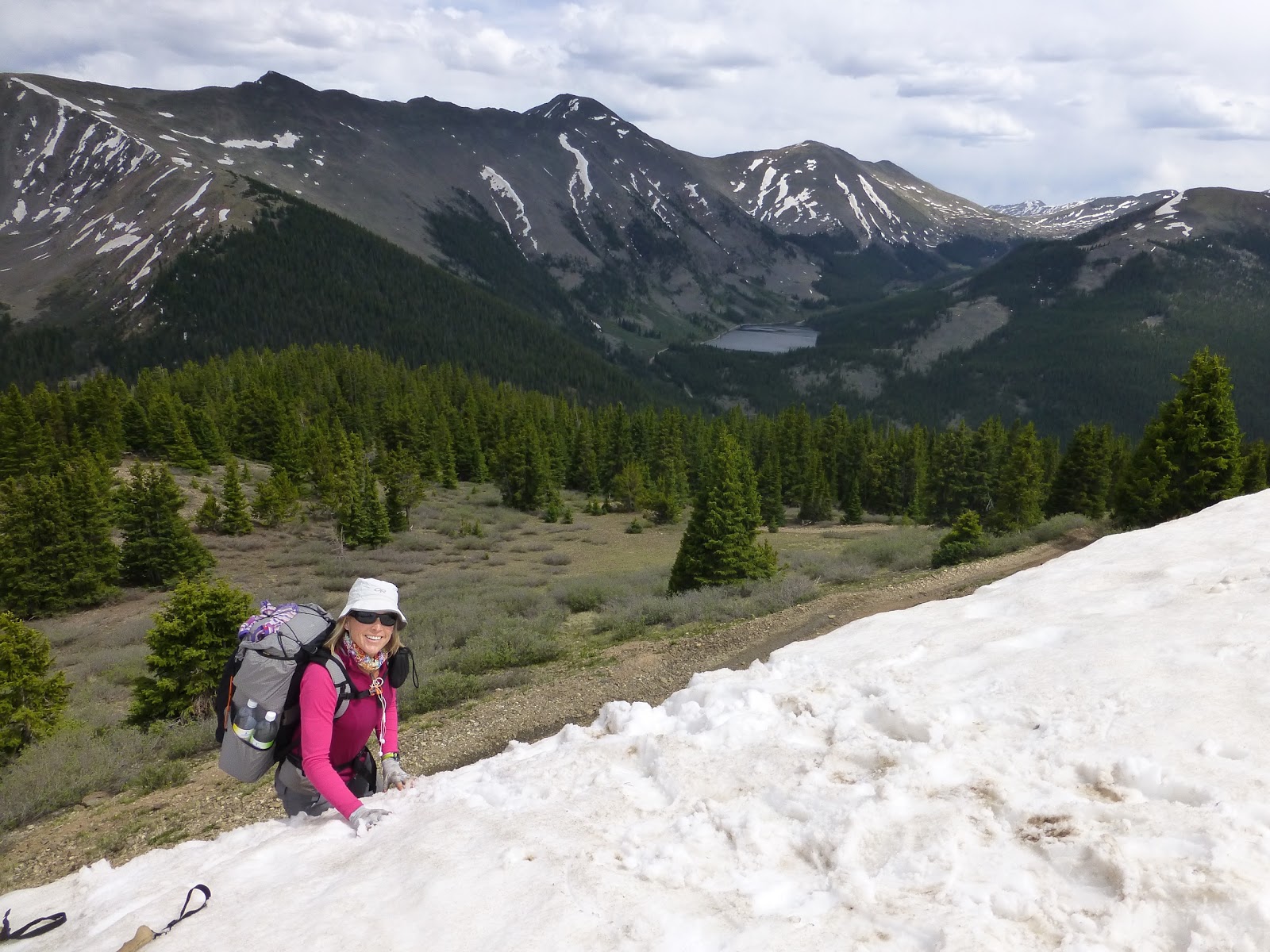 It was getting late, so I hiked on ahead to make it to the pass. When I got there at 7pm, no one was there and I set up my tent at the trailhead. Rockin’ came 40mins later and Michael and his son Sydney showed up at 8pm just as we were having dinner. Michael had driven 18hrs in the last 22hrs to make it to us on time! He wins the award for longest travel to do trail magic! It was too bad the group hiked on for some reason because Michael had brought tons of goodies…fruit, sodas, chips, cookies…even a chocolate milk for me and Rockin’ got Michael to trade half his Subway sandwich for her dehydrated beans dinner. She scored! 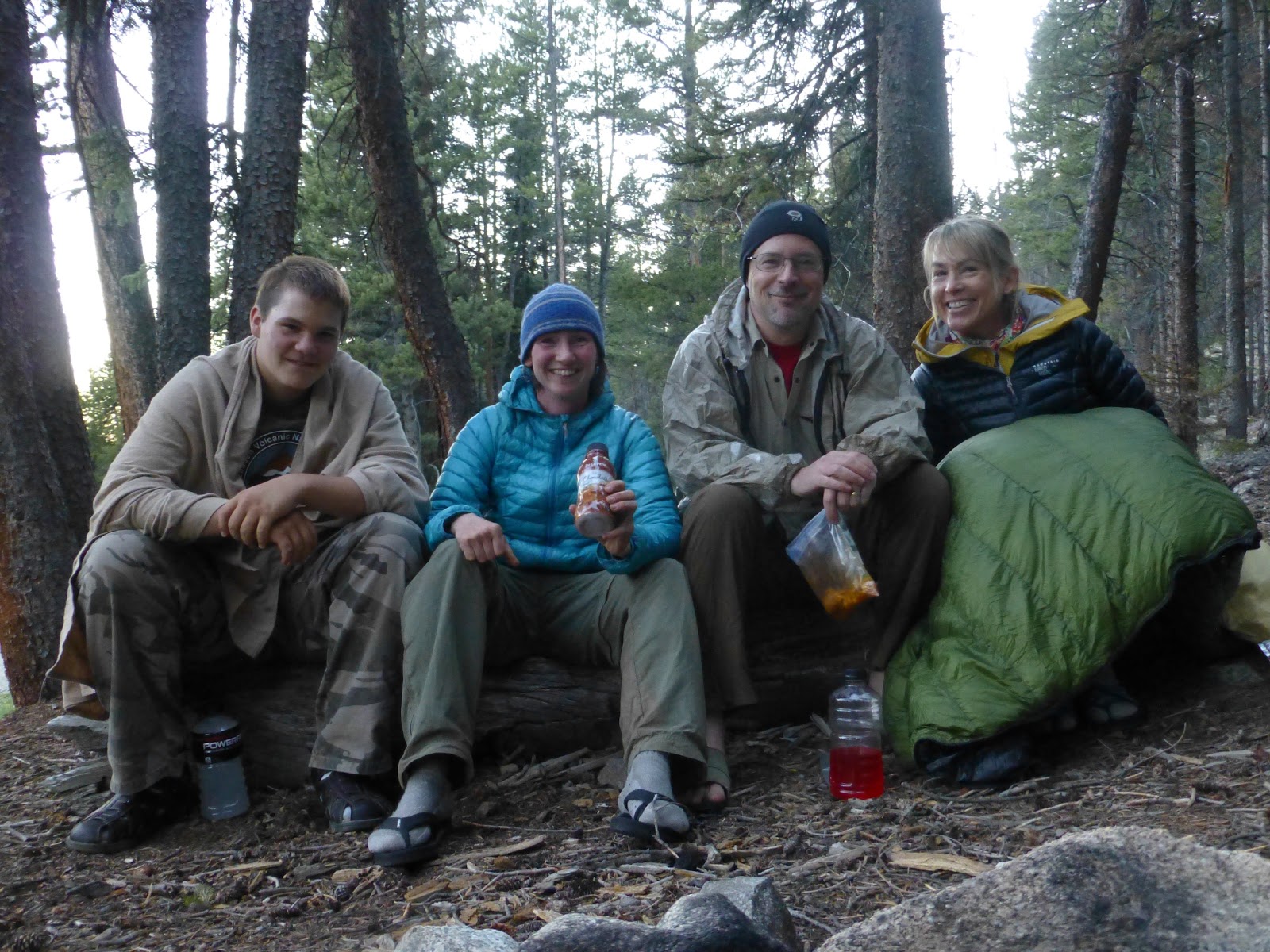 THANK YOU SO MUCH Michael and Sydney. You got us to hike the most miles we’ve hiked in weeks and it was well worth it!