June 25th
Below Radical Hill(1113.7)-Below Grays Mtn(1134.2)
Campsite Elevation: 12,250ft
20.5mi
Today ended up being one of the most physically challenging and exhausting days of hiking both Mtn Rat and I have done. We knew we wanted to get over Grays Mtn, which is the highest point on the CDT at 14,261ft and we knew that the summit was about 20mi away. It is oddly positioned that we would either have to camp really early to do it the next day, or just push over in the late afternoon, which is not advised in Colorado because if the sudden late afternoon thunderstorms that sometimes occur unexpectedly. We started hiking at 5:45am thinking that would give us more than enough time to get over Grays and even possibly make it beyond that to I-70 where I could meet Scott to get the solar charger I left at his house. Right away, the day did not start off on the right foot. Last night, unbelievably high winds kicked in and our tents were flapping all night. We were camped above treeline, which most of this section is, so we didn’t have much choice in the matter. I was pitched against a short bush, which is actually really fortunate that high up, and it helped a bit, but could not prevent the tent from flapping from the strong wind. The tent did amazingly well and was very sturdy in the wind but the flapping noise kept me up most the night. It did not help me that I slept very little in preparation for such a strenuous and long day. In addition to my lack of sleep, we started the day off by immediately missing a turn and walking .4mi before noticing, having to turn around and start over, so that added almost a mile to our day right off the bat.
The wind continued all morning and neither one of us have experienced such strong wind for such an extended period of time. It was a constant, unrelenting, strong wind that would sometimes have even stronger surges. Most of the time, it was hitting us at a side angle and that made the hiking EXHAUSTING! I can’t even explain how exhausting it was to go up the steepness we had this morning with that constant force pushing us around. Mtn Rat said it was like being up against the ropes in a boxing ring and getting the shit kicked out of you. We had high hopes for the morning miles and that quickly vanished with the wind and the fact that we did not expect the rocky terrain and steepness that we had. We were up on the divide and instead of contouring around these 13,000ft peaks, the trail went straight up and over about five of them back to back. I think each one was up at least 800ft and back down just as much, just to go back up again. It was basically summitting little mountains all morning. They were so steep that there wasn’t a trail on most of them and just cairns to follow. The steepness was such that you wouldn’t see the second cairn until arriving at the one ahead of it. We couldn’t even eat with the wind and had to stop for breaks when we came across a sheltered area that blocked the wind. Here is a picture of Mtn Rat going down one and the next one in front of us. We were on the actual Divide and that was cool. 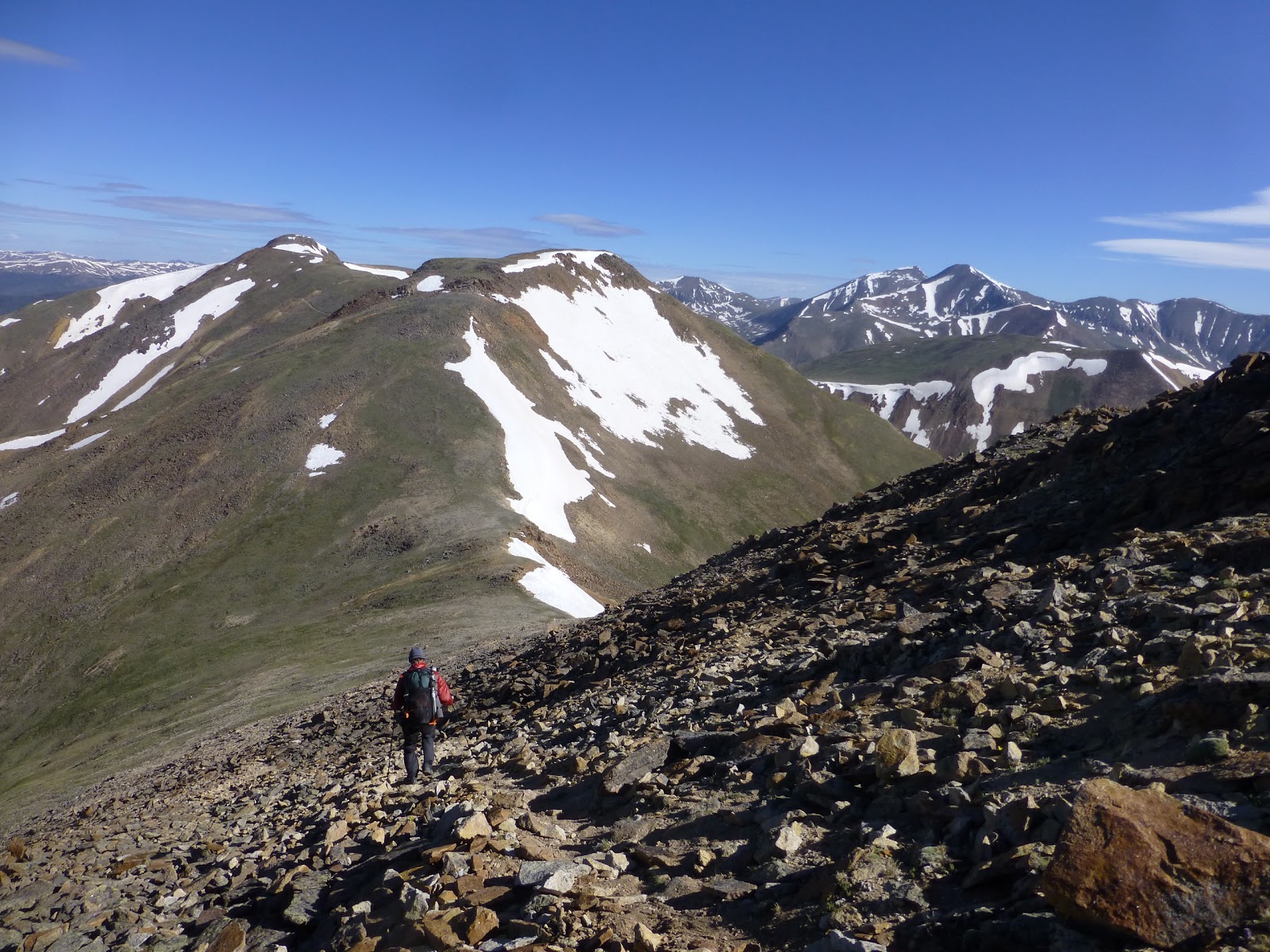 One of the first ones we went over, we saw mountain goats below. As the trail got closer to them, they ran up another mountain. Our trail went around that one and when we got to the other side, I was able to get a great shot of the mountain goats perched up top. So cool! 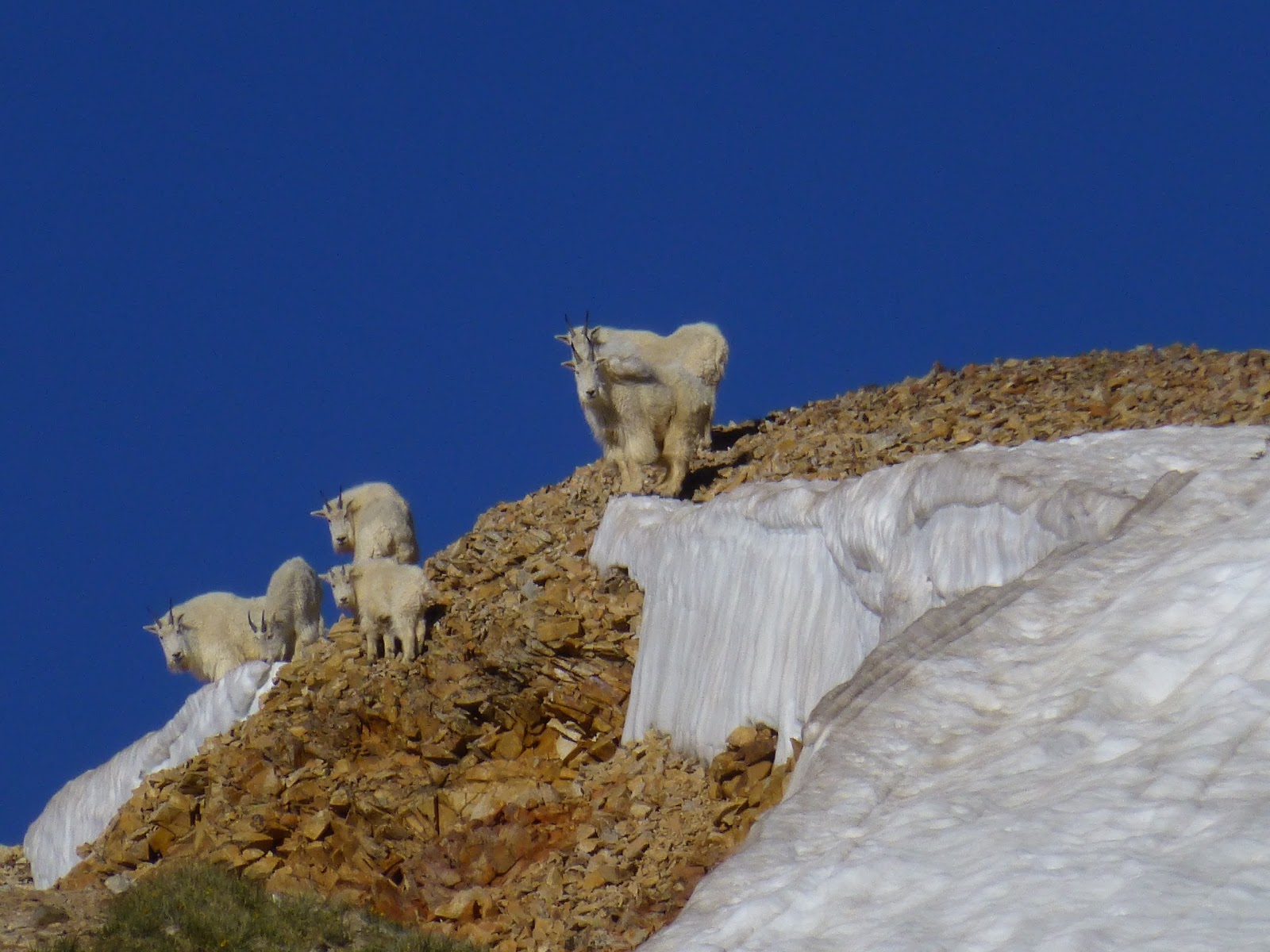 About 10mi into the day, we were excited for the trail to finally drop below 11,000ft into a valley and get a break from the wind. Before it dropped, we got a great view of Grays on the right and Torreys on the left. 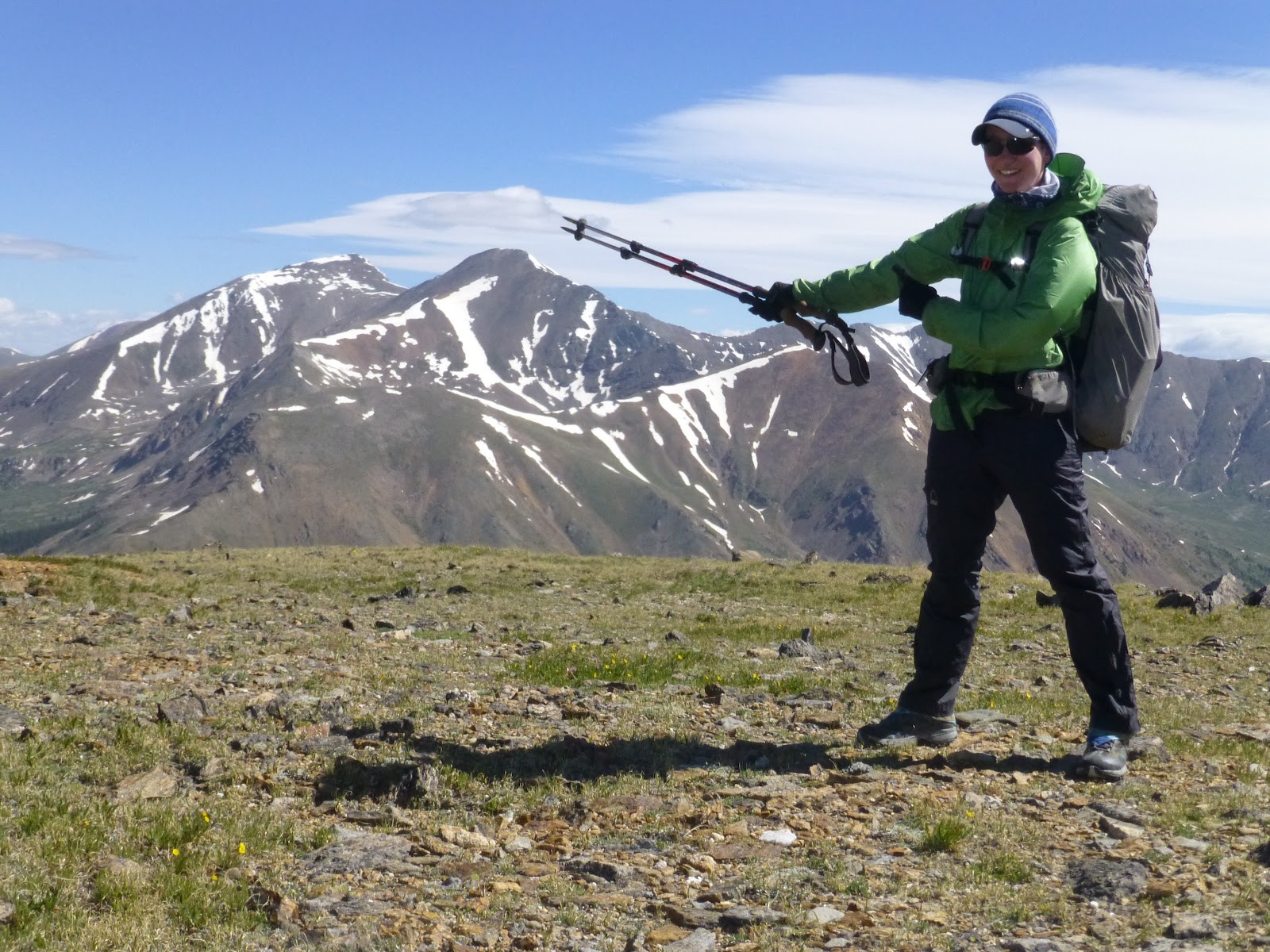 Of course, going into the valley wasn’t even simple because there was a huge cornice we couldn’t get over. We had to hike over an extra peak and cross country it down the hill to get around it. When we got to the valley, it was the first time we took off our double layer of clothes and beanies. I even had my rainpants over my pants and my buff over most my face to protect from the wind. It was nice to take all that off.
After lunch, we got to walk along a dirt road down low for a couple hours and that was nice after the morning. We hit the trailhead for Grays at 2:45pm and had 3,300ft to hike to the summit over 6mi. It seemed gradual and we just hoped the wind had died down. The first half was pretty simple, but the second half took us forever to do! There was more of that up and down summit ridiculousness from this morning and then a couple miles of rocky trail and even going across a rocky spine for an extended period. Grays is on the left and Torreys is on the right below. 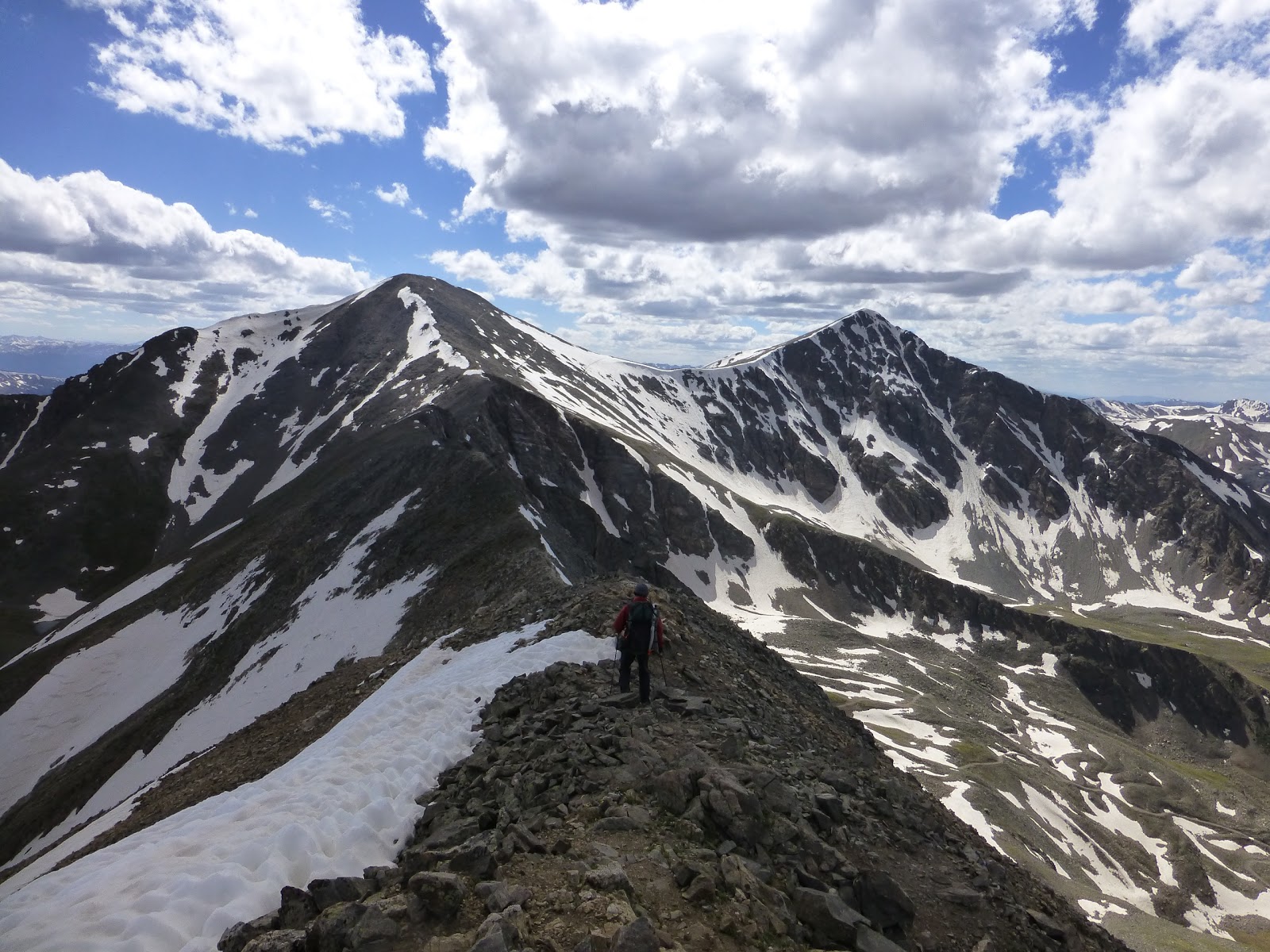 We were super lucky as it was late afternoon and there was NO WIND! We summitted at 5:45pm and chose not to summit the additional Torreys next to it cause we were just wiped out. 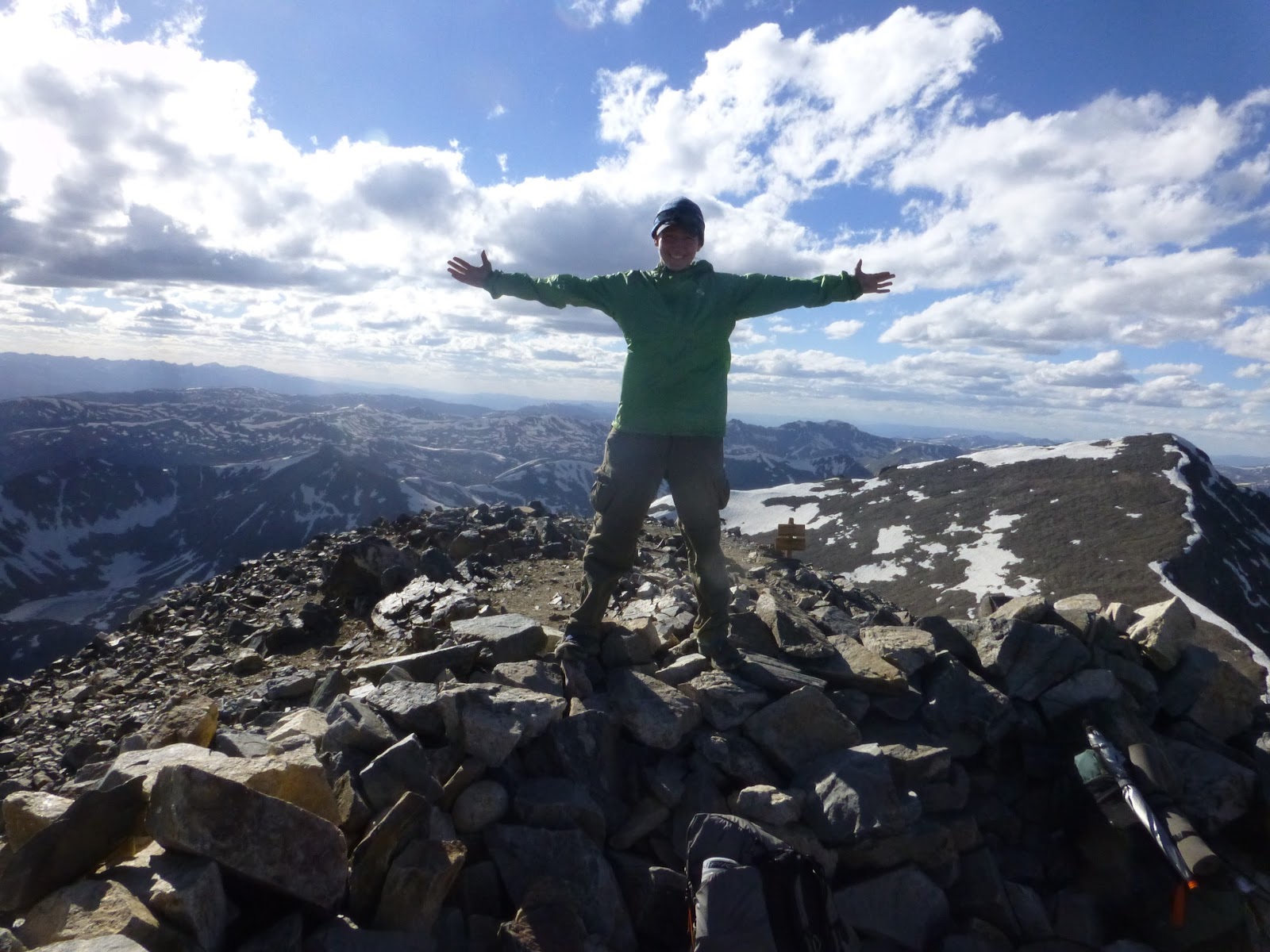 We had a 2mi hike down and camped as soon as we found a flat spot. On the way down we saw more mountain goats! This time, they didn’t run and the large male even walked up trail and right by us! The kids and the mom just ate while we walked around them and even took a bunch of pictures with them. 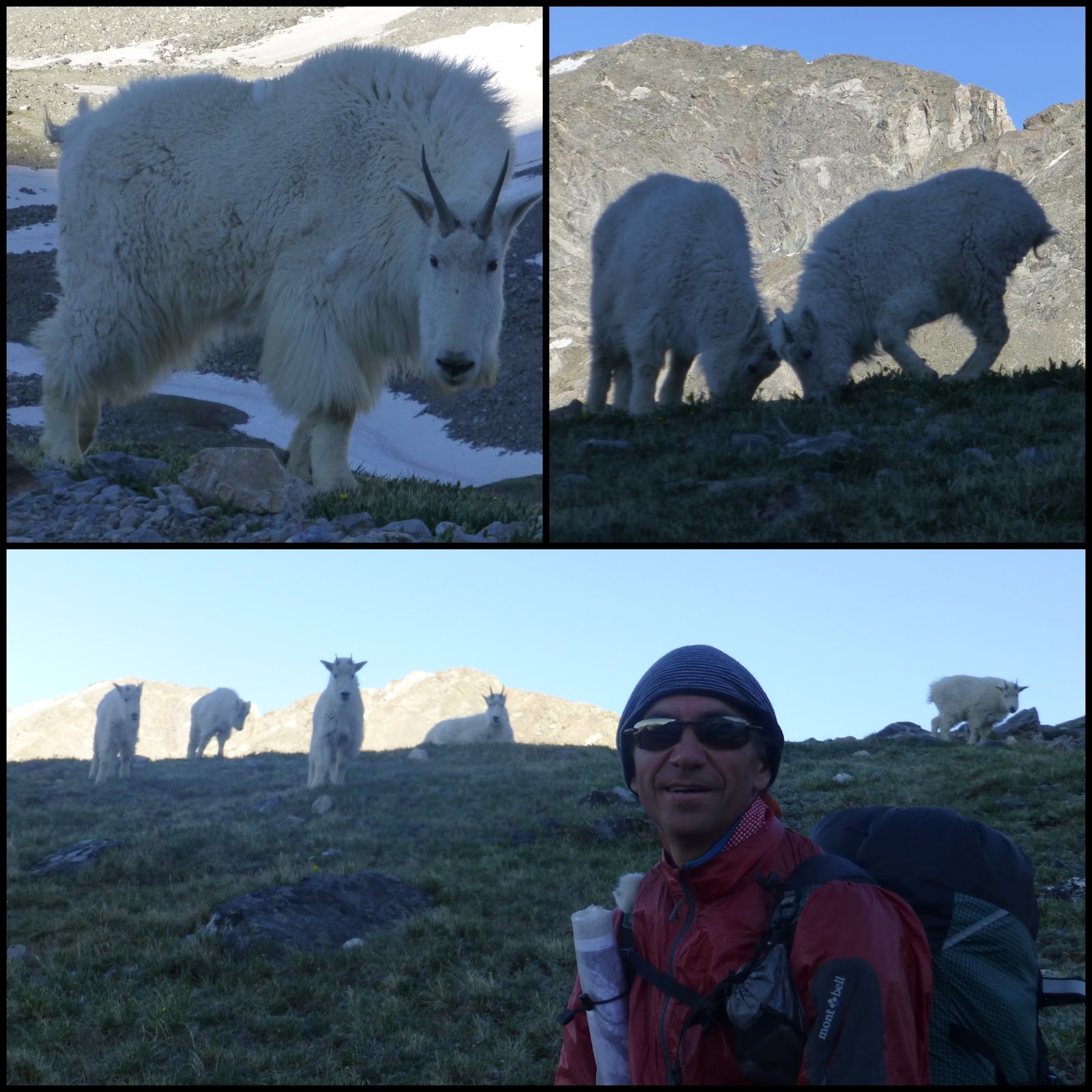 This must be a popular trail with lots of people cause they were like cows grazing and were afraid of us at all! Once we got to camp, I realized that I left my Gatorade bottle that I use as my main water bottle halfway up the mountain by a stream. Argh! I have bladders I can use the rest if the leg, but I was proud that I’d yet to lose one on the CDT as I did this often on the PCT, argh! Whew, what a day! We agreed to sleep in tomorrow!