June 28th
2mi Before Rollins Pass(1182.6)-Grand Bay(1210.6)
Campsite Elevation: 8,295ft
28mi
Even though I made good miles today, I was just a bit out of sync and little things are going wrong. It’s in the details for a perfectionist like me and I’m trying not to let them get to me. Let’s start with the fact that my period started yesterday and honestly, that was my reason for pushing through this leg ahead of the crew. I saw how difficult this leg was going to be and I wanted to finish it before I felt horrible and I wanted to do it a day faster…mission accomplished! I felt like a zoned out zombie all day and luckily, it was pretty much downhill the whole day. I just cruised for most of the day feeling really crummy and foggy and put my body in auto drive. The day started with me sleeping in cause I just felt like dead weight. I had reception and got some emailing done, figuring I’d be able to charge the phone later…mistake number one…There was a bit more hiking on the Divide at about 12,000ft. 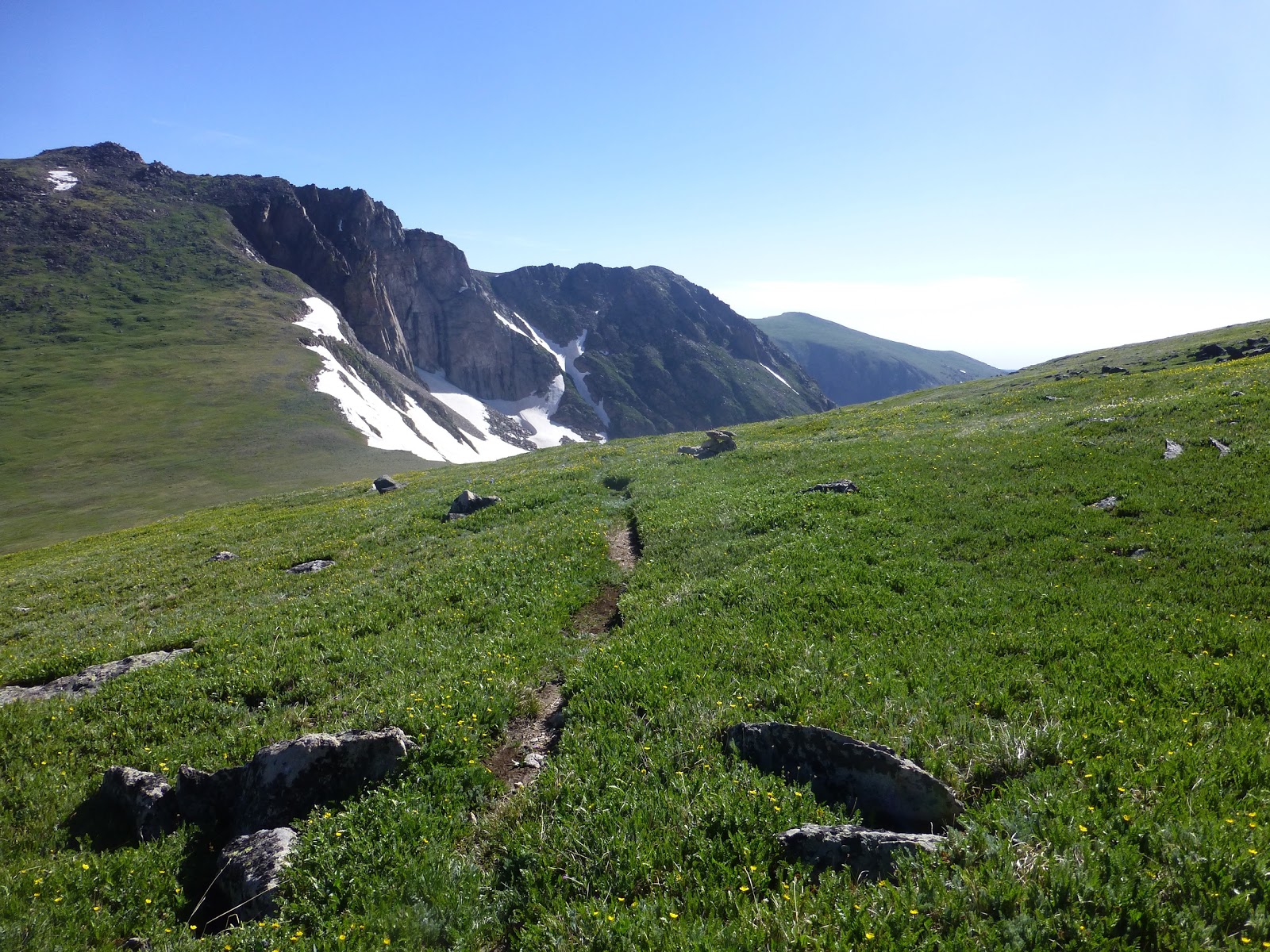 Then the decline started and this is what I was headed down to…it was here that I noticed something was wrong with my camera. It will only take one photo at a time, it won’t focus, won’t zoom, and no other buttons respond except one press of the main photo button. Double ARGH! My photos are key to me and I am soooo frustrated by this. I’m going to decide what to do when I get to my next town in a week. I might have to send it in as I got it at Best Buy with insurance knowing I’d be going on a hike…problem is that it can take weeks and then I’m stuck with the iPhone and possibly an old camera that sometimes works that I put in my bounce box for this occasion. I’ll keep you all updated, but this is the cause of my less quality photos. ARGH!

I also called Rocky Mtn National Park and found out that the side trip 25mi loop I’d been looking forward to was closed due to a fire on part of it. Dang! Not sure if or what I’ll do if I still decide to take a day at the park in two days.

As soon as I got into the woods, the mosquitoes hit. I was walking and heard an odd creaking notice repeatedly and saw this animal slowly crawling up the tree…Of course I couldn’t get a better shot with my broken camera, but it looked like a sloth, but couldn’t be! It was slow, furry, had claws, and a really long tail that was thick with the face of a monkey. 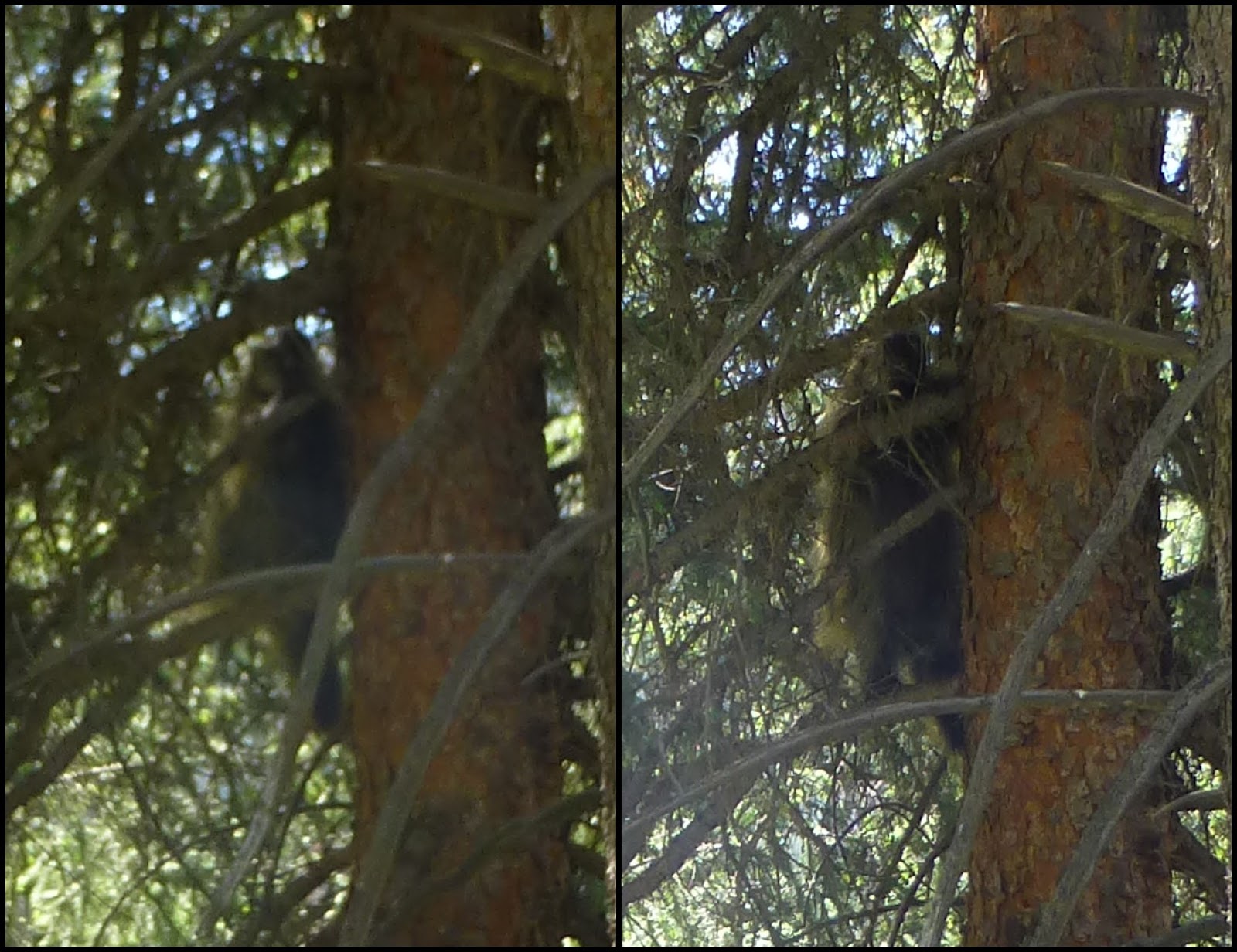 Then I walked through a meadow and it had this cool bridge that ended in the middle of nowhere. It was cool… 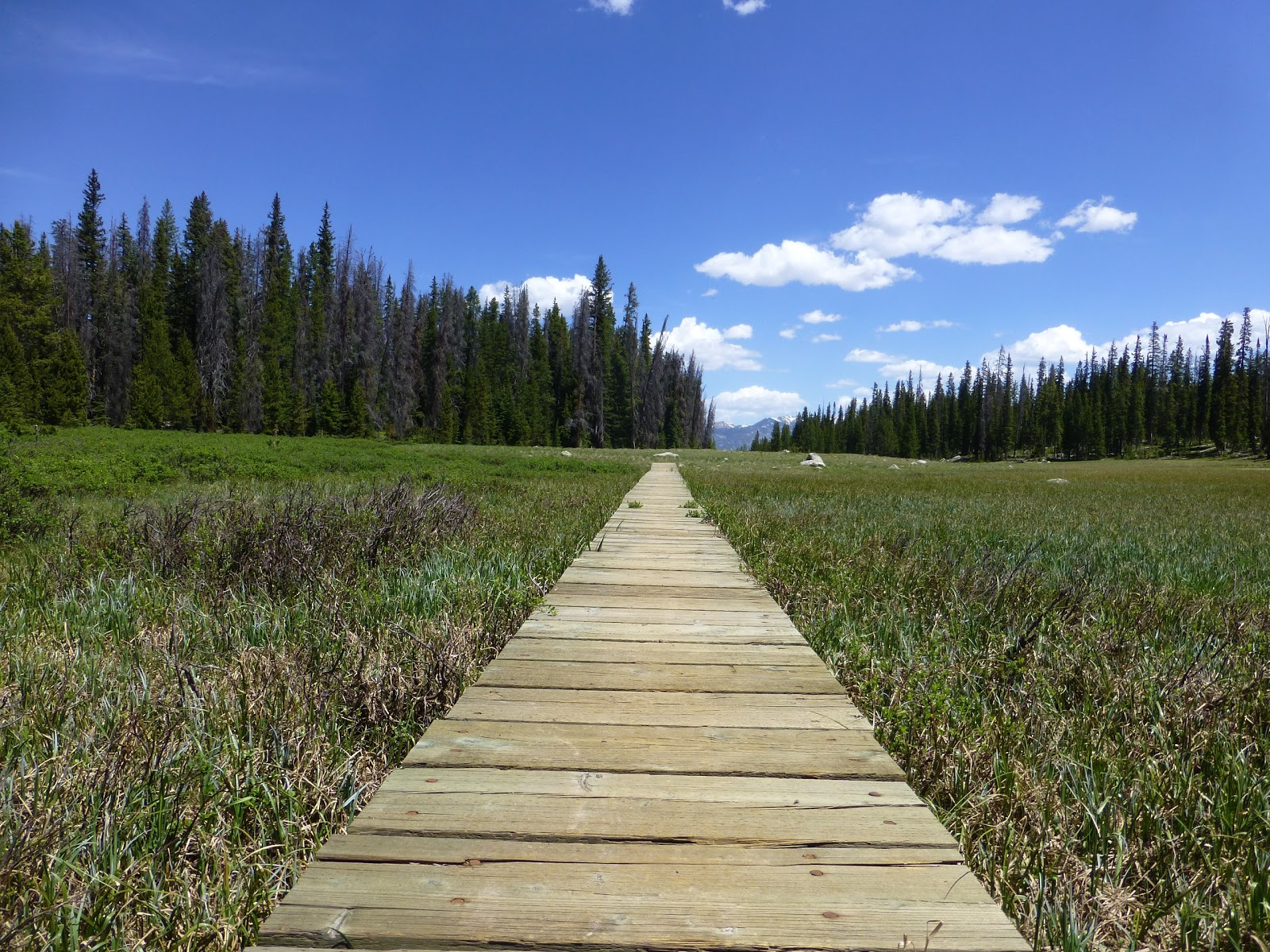 It was about then that I realized I didn’t have my Chapstick, ARGH! I was so proud I made it this far without losing it. I keep a backup in my pack, but it’s the kind I had in NM with protectant and no moisturizer. My lips screamed the rest of the day and I’m happy I’m going to town tomorrow!

After the meadow, I saw Track & Field having lunch, but it was too early for me and I wasn’t hungry all day in my condition. I walked a bit further after talking to them and stopped at a stream too good to pass up. I did laundry and charged my phone…or so I thought….I had placed it away from me in the sun and was feeling too crummy/lazy to check on it. Apparently, it wasn’t positioned well enough and I was at 50% with clouds rolling in for the rest of the day…which is okay if I don’t use it for GPS too much the rest of the day…While I was sitting there, Track & Field came by and mentioned that there was an upcoming section with horrible blowdowns…anyone see what’s coming here???

Also, the Columbine flowers are popping up everywhere and I had to get a shot! 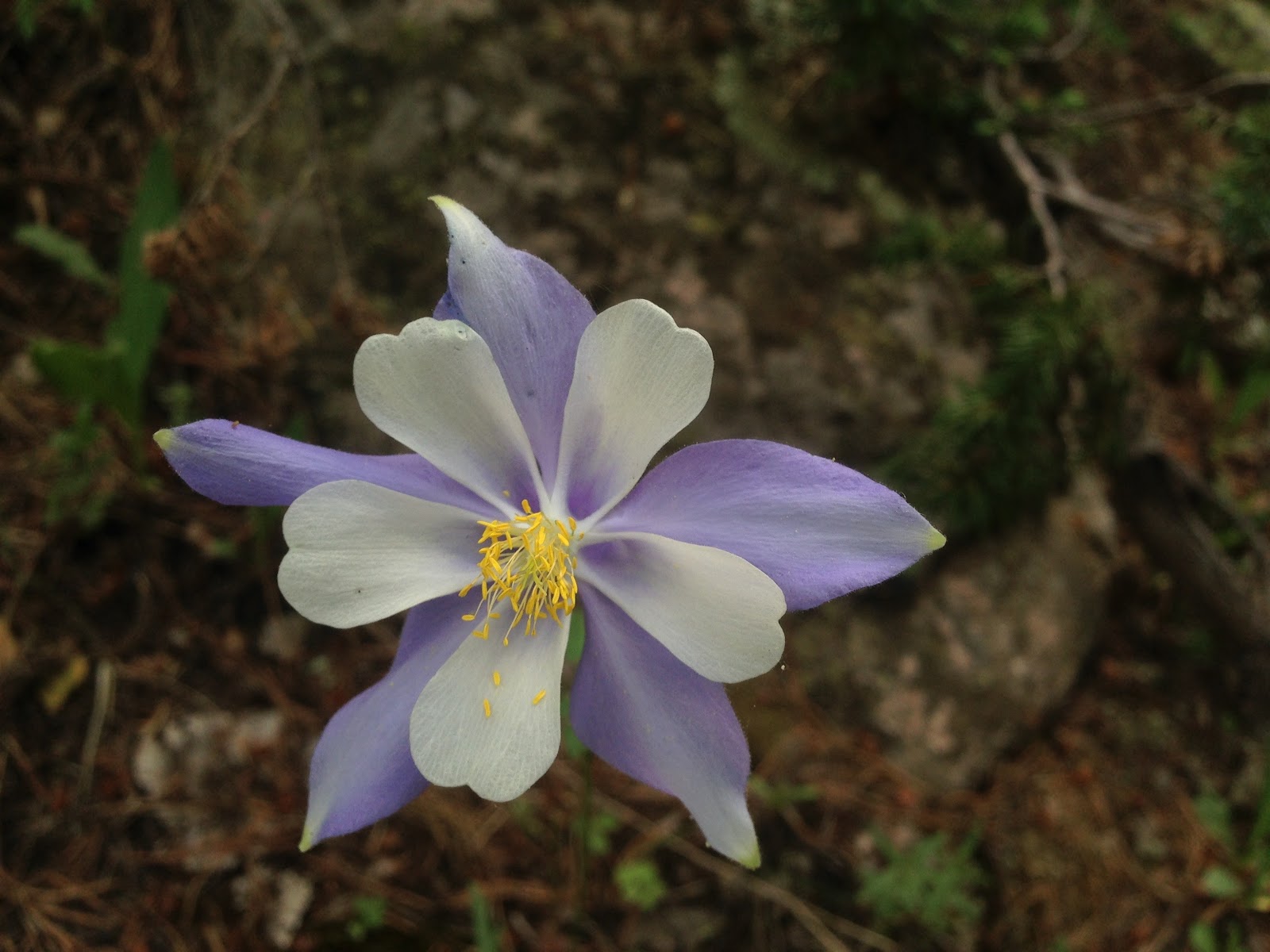 At the end of the day, there was the blowdown section. It was a six mile section and it was recommended on the maps to walk the lake shore to avoid the trees. I did that and saw Track & Field’s prints…until it soon became a rocky bouldery mess my ankles hate. 2/3 of the way through, I got annoyed and figured I could save time by cutting steeply back up to the trail. Wrong! You can see the brush below that I first got cut and scraped. Then I got to the top and found myself caught in the post apocalypse forest! It SUCKED! I took another hour just to get down and out of it. I was totally cut up and scraped all over. Plus, I used my GPS and was running my battery down to where I’d have to save it and not blog that night. Here is the progression from nice shore to post apocalypse forest. 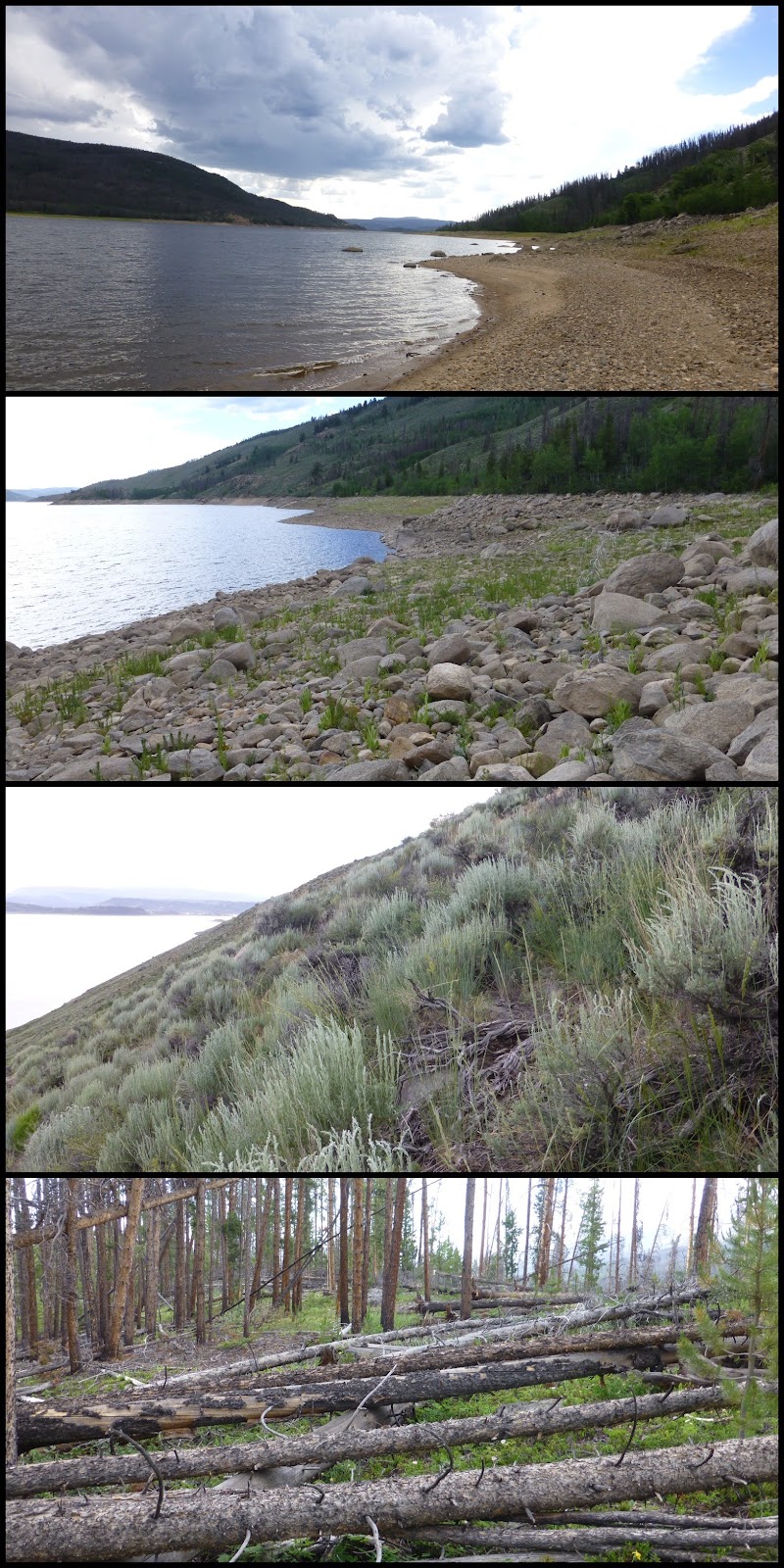 I hit the shore 2hrs and 15mins after I started and decided to just quit before it got worse! At least I can say I got to camp on a beach, ha! I was in the bay before the Colorado River entered the lake. It was a great site and lots of people were out and about. I was glad I didn’t go further because I could see campfires and groups down shore well into the night. Also, there was an incredible lightning storm of some short. The clouds would light up the sky in flashes with no rain or lightning. It was so warm out, I have the beak of my tent up so I have just mesh to watch the show. I have shorts and a t-shirt on, and am just using my sleeping bag as a blanket. Hoping tomorrow goes smoother! 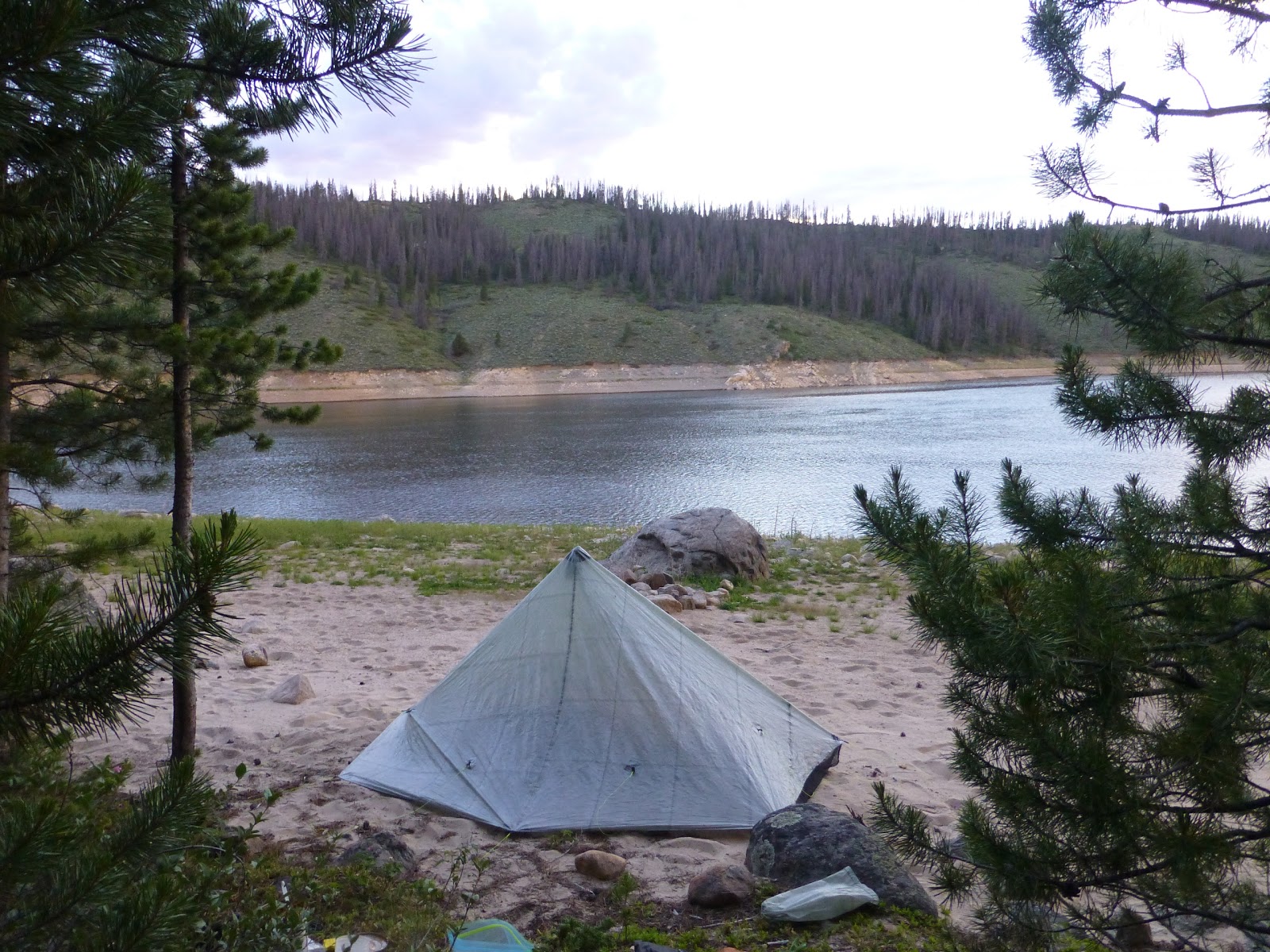