July 5th
Rabbit Ears Pass(Steamboat Springs)(1302)-1mi Before Rainbow Lake Trail(1329.2)
Campsite Elevation: 11,481ft
27.2mi
Yesterday I mentioned the fundraising effort being made by the Continental Divide Trail Coalition. Their goal was to raise $35,000 by the end of the day today. The exciting news is that they had already reached their goal this morning. I’m not sure how much they ended up with, but I want to thank anyone who donated. The coalition is new and the old organization fell through when there wasn’t enough funding. So great to see the support for this little known trail that is gaining momentum!
I have two other announcements. All of you great people who have sent care packages with dinners like Mountain Houses have done a great job. Just today I hit my magic number and now have all my dinners for the projected days I will be on trail. Thank you all so much! Those of you who were still planning to send something, the list of ideas are on my care package tab, but please DO NOT send anymore dinners as I won’t be able to use them on trail. My second announcement is that my twin sister, Siobhan is one month away from having little man #2! 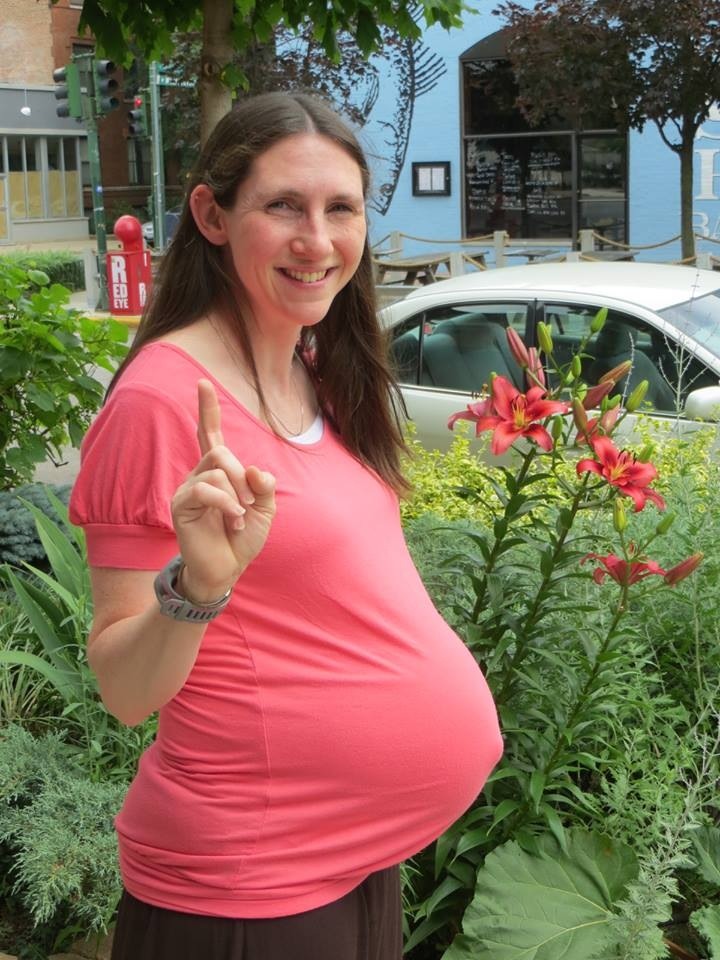 It really could happen any day now with how big he already seems to be. I know this has little to do with the trail, but it does because her first son Lucas was born while I was on the PCT and we are having somewhat similar experiences. Both are arduous and lengthy times of discomfort that includes carrying extra weight and both are major life events. Mine is not nearly the commitment hers is and I have the option of taking my extra carrying weight off! It’s exciting though!
Now back to today’s day of hiking. Last night, Ninja and Sweetfish surprisingly arrived at the hotel. They still have the road walk on the highway to do with the rest of the group, but they thought it would be fun to hitch in since it was the fourth and they ended up sleeping in my room. I had a ride arranged for 7am the 20mi hitch back to the trail and they headed back out with me. My ride was with a local rancher that Estero and I met when we did the road walk the other day. His name is Brad and he owns a large ranch raising bison that is right along the highway that is our “trail” going into town. He noticed the hikers and inquired last year about what we were all doing. He said hi to me and Estero the other day and I told him about my journal. Through that, we got in contact and Brad immediately put out a cooler he’s going to keep stocked with drinks and treats for the hikers on the long road walk. Already the hikers yesterday and today have loved it! Then Brad offered to take me back to the trail and get Ninja and Sweetfish where they left off. On the way out to the trail, we saw Softwalker, and Track & Field heading in and trying to hitch. I heard that Brad ended up helping them AND the whole crew I’ve been hiking with that was just behind them. It’s 20mi each way and Brad made multiple trips today. He’s officially a trail angel! THANKS BRAD!!! He dropped me off and I headed out on my own. 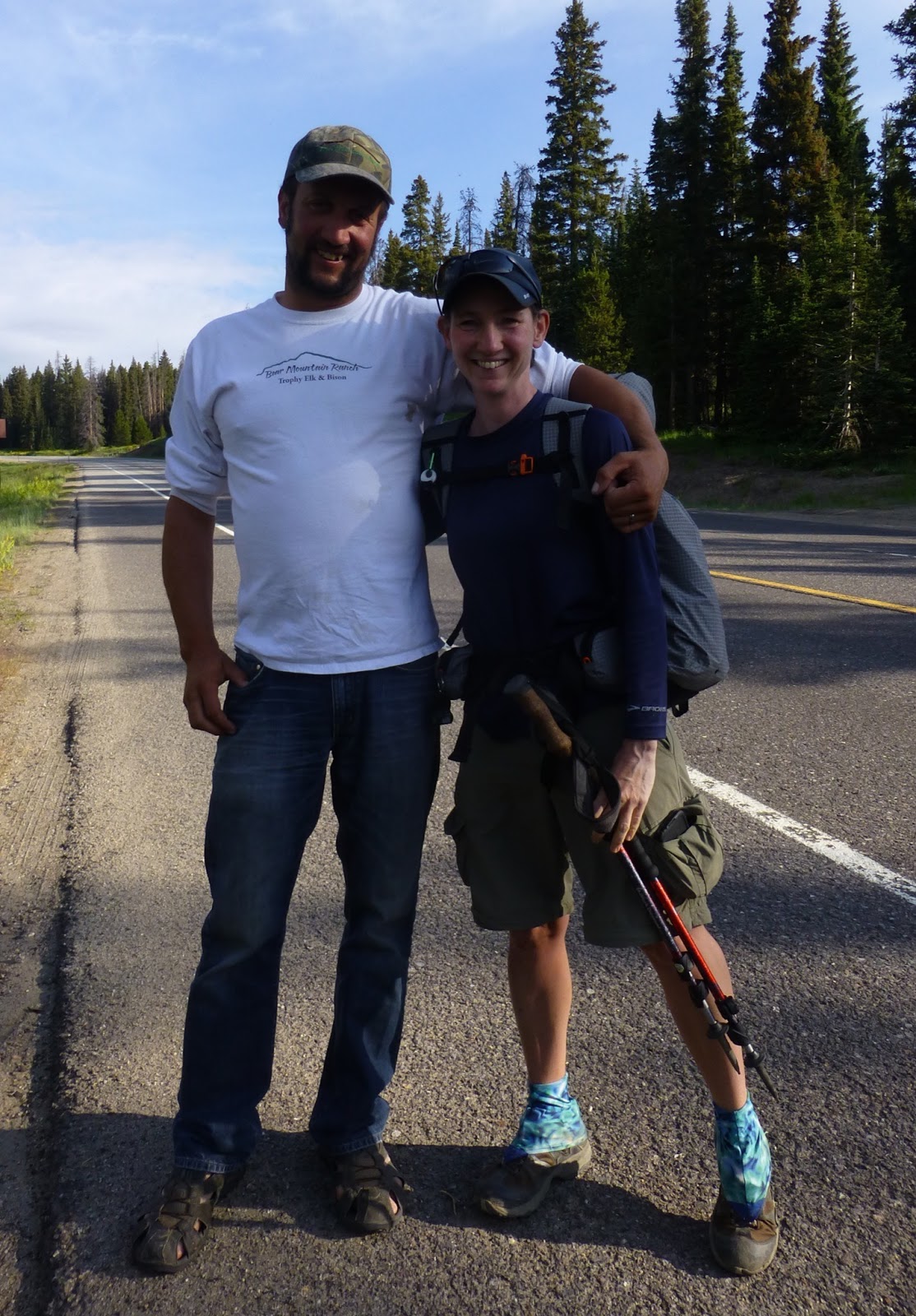 As for the trail, there is no sign to indicate where the “trail” turns off the highway and it’s confusing cause it goes on a back road that parallels the highway and back out. Well, Estero and I seem to have walked too far the other day and I got dropped off further back where we missed the turn. After most 2mi of hiking this morning, I ended up back by where I hitched the other day, so I technically unnecessarily hiked 2mi that I had already hiked the other day on the highway. Dang! Well, at least the hiking was finally easy today! Man, it’s been awhile since we’ve had such a day when the trail is moderate enough to just relax and stretch my legs. It started off on old service roads and lots of wildflowers along the trail. 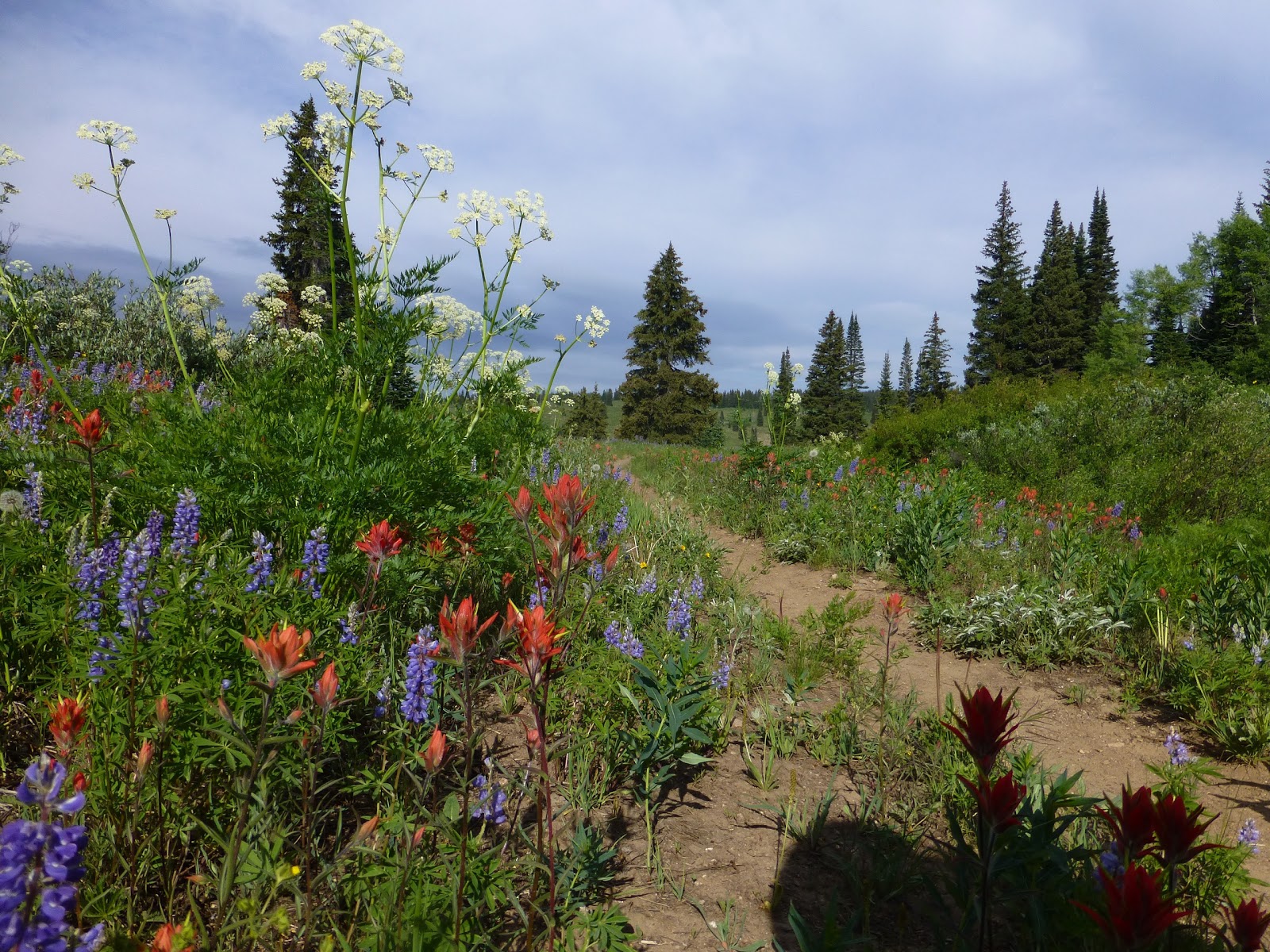 Then there was an extended wooded section for a few hours with many lakes and some mosquitoes. 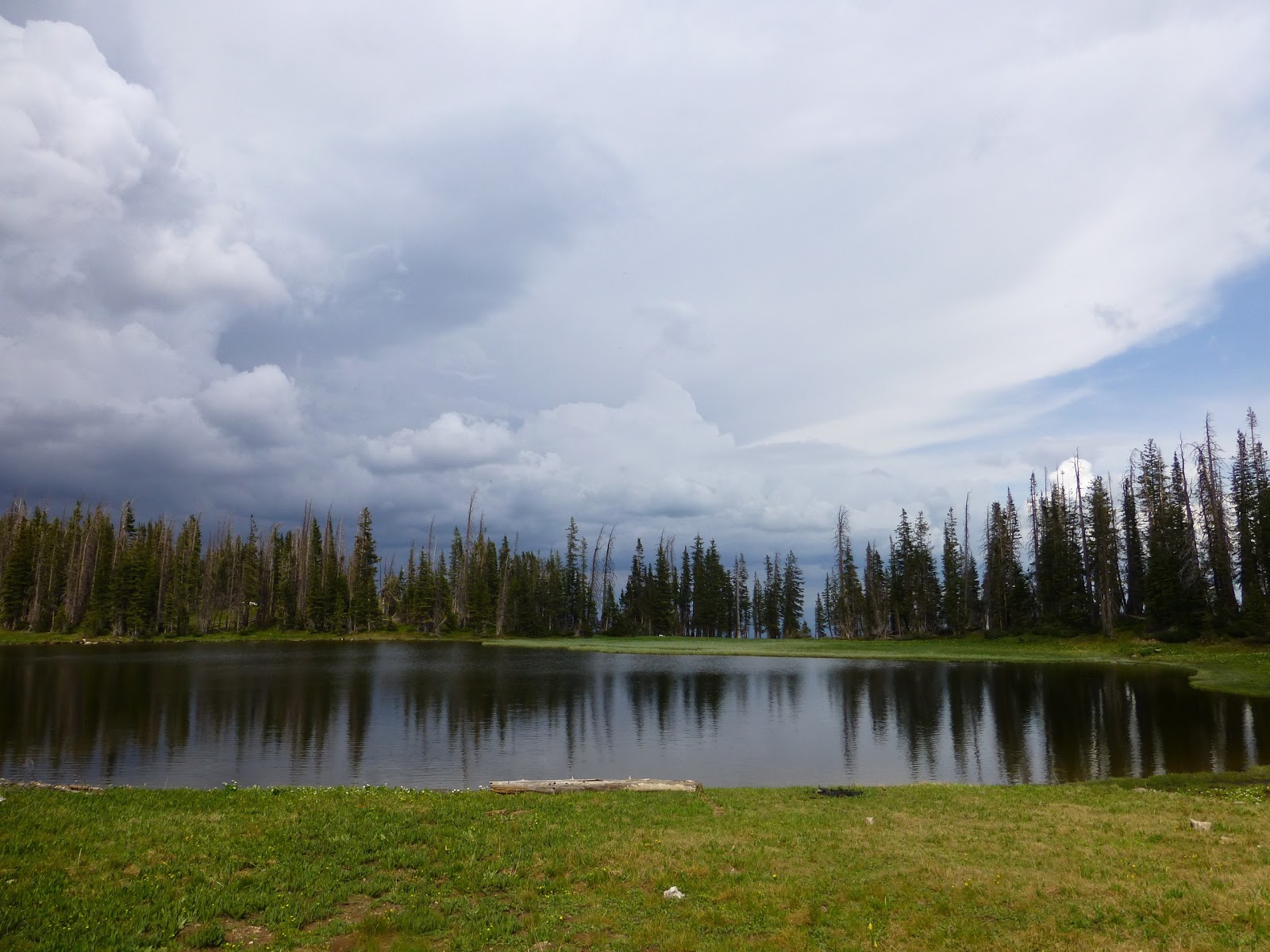 Since it is the holiday weekend, it was packed with mountain bikers and people on little four wheelers. I couldn’t believe those things even fit the width of the trail!
I spent a lot of the day listening to the audiobook called The Solitude of Prime Numbers and it has been entertaining. After the wooded section, the second half of the day was above tree line around 10,000ft and 11,000ft. It still wasn’t steep of difficult hiking, but the one hurdle today was the weather. It got darker and the skies started rumbling around 3pm. This happens a lot and many times nothing happens as it passes just next to you. Well, today it was right on top of me and this was my first major hard rain with hail. I hiked as far as I could and just as the hail started at 4pm, I got my tent up at just the right time. I was in a great spot and sheltered. I was glad it wasn’t windy, but there was a lot of thunder and lightning bolts in the near distance. The hail fell for awhile and then there was hard rain. My ZPacks Hexamid tent rocked and I was totally protected. I waited 40mins for it to pass and even had reception to watch the second half of a Modern Family episode I didn’t finish yesterday! 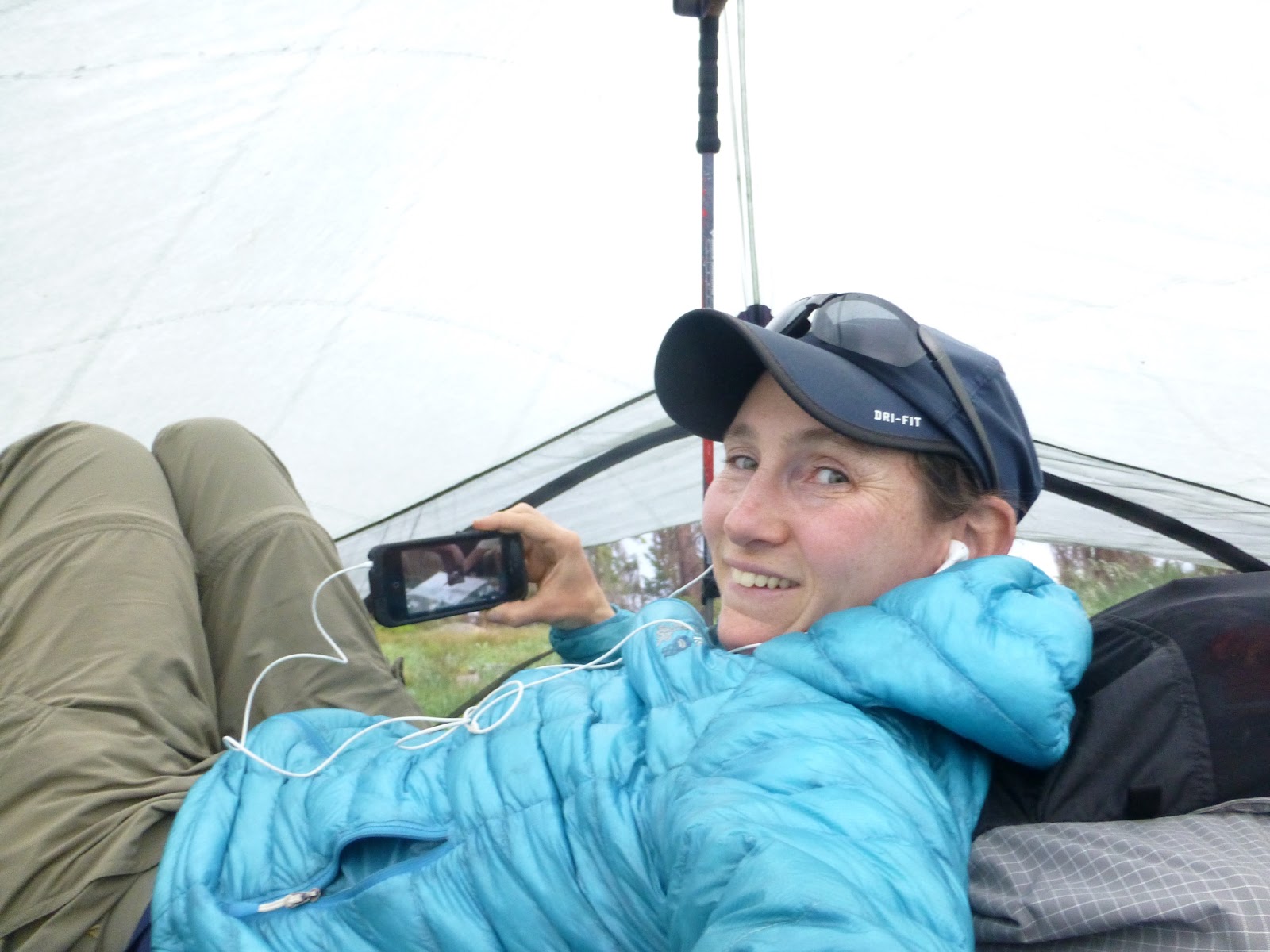 The rain and hail passed and the sun came out, so I was able to drape the tent over my pack and it to dried quickly. I was bummed to lose the hiking time, but was glad it passed quickly. Here is the view of it after it passed.

The rest of the late afternoon had cairns and more of a rocky trail, but great views! 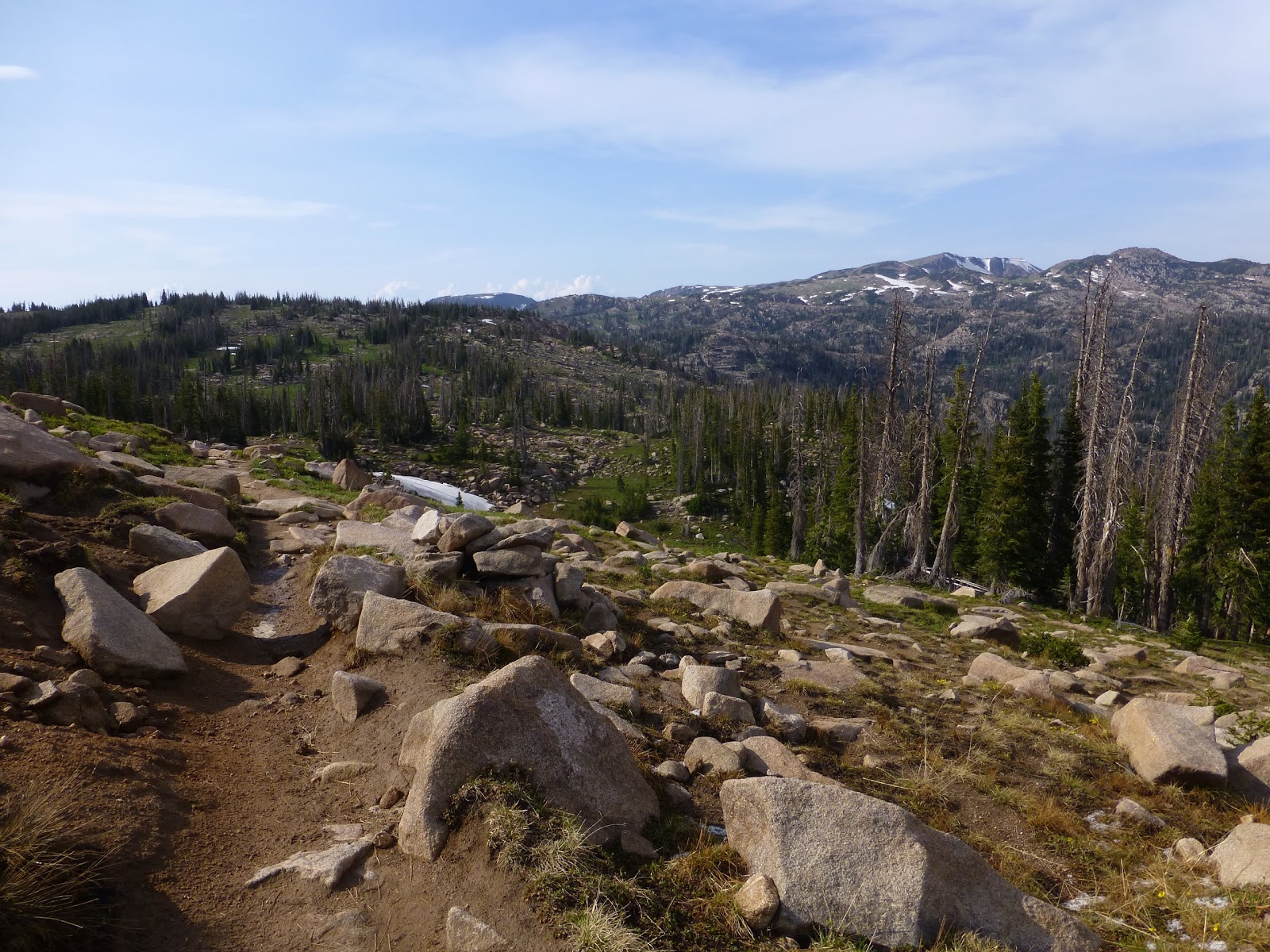 I hiked on and was hoping to get over a peak that I am now camped before. It turned out okay as I somehow still did great mileage today with a 27.2mi day. I’m very happy with that as that is hard to do coming out of town. This leg has two options. Either go ~155mi all at once to Rawlins or stop halfway in a town called Encampment to resupply. It’s 50/50 what hikers tend to do depending on the hiker and their schedule. I’ve chosen to go into Encampment to resupply so I don’t do such a long stretch. I mention this because I am solo and many that are getting on trail tomorrow won’t go into Encampment. That means we may even out and I might see Rampage, Bloodbath, Sycamore, Softwalker, Estero, or Track & Field in a few days after I go into Encampment. As for the crew, they remain 2 days behind as they are choosing to zero in Steamboat tomorrow. Many have inquired about Mtn Rat. He is pushing hard to get as far as he can by mid Aug because he has a family event and has to leave for a week. So there is a chance we will overlap at the end of the trail when he returns from his family event.
I enjoyed my day today and think this will be a relaxing leg physically for a change. Mosquitoes are getting more numerous, but I have still yet to use the bug spray. I hope the weather clears as these afternoon thunderstorms have been appearing the last few days. At least they are short. I am camped high in the hopes of not having condensation, but the air is just a damp cold, so I may have to deal with a wet tent in the morning.

There is also rumblings and lightning in the distance again…but I’m in a good sheltered spot. It’s nice up here!