July 7th
Imi Before Ellis Trail Inter(1358.4)-Battle Pass WY 70(Encampment & Riverside)(1386.4)
Campsite Elevation: 7,198(in town)
28mi
As I finished writing last night, I mentioned the lightning and thunder again…yep it stormed on me again around midnight for an hour. It wasn’t as intense as the night before, but it was intense! I was lucky that I was low and in the trees. I took video while in the tent that I will probably post just so people can get an idea of what that experience is like in a tent. Last night I could hear that it was really windy and I was fortunately camped in a protected area. Sheesh! That’s three thunderstorms in 48hrs for me. Good thing I was in my tent for all of them. Again, I’m going to praise my tent for holding up in such conditions. The zpacks Hexamid Plus. It may not be my favorite all around, but I give it props in a thunderstorm. I also want to say that choosing a proper sheltered campsite is essential too. Those picturesque sites with a view aren’t necessarily the most practical.
As for this morning, I was foggy again with the interrupted sleep, but the alarm clock of birds in the forest still rang nice and loud at 5:30am. The tent was wet on the outside and I’ve developed a great strategy for packing it up on wet mornings. I use a trash compactor bag daily to line my pack and I have a 1/4 bottom of a trash compactor bag I use as a top inside my pack for double protection in real rain. I realized it perfectly fits my wet tent loosely wrapped up and there is a long pocket on the side of my pack I can store it in until lunch when I’ve been able to lay the tent out to dry. The trash compactor bag keeps the tent from getting everything else in my pack wet. Hope that makes sense without a visual. I’ll have to work on getting pics of that. Well, I got another later start at 6:50am since I felt groggy. I really like this independence on my own of not being on a schedule. I was excited because I was really close to crossing into Wyoming and I knew that if I got enough miles in today, I could possibly make it to town where I had a quick resupply and there was a campsite with showers and wifi. I’ve tried to time it perfectly to make it in tonight ever since I started this leg and it was nice to have something to motivate me. The day started out back on the “Wyoming Trail” which is in Colorado and more of a road than a trail. 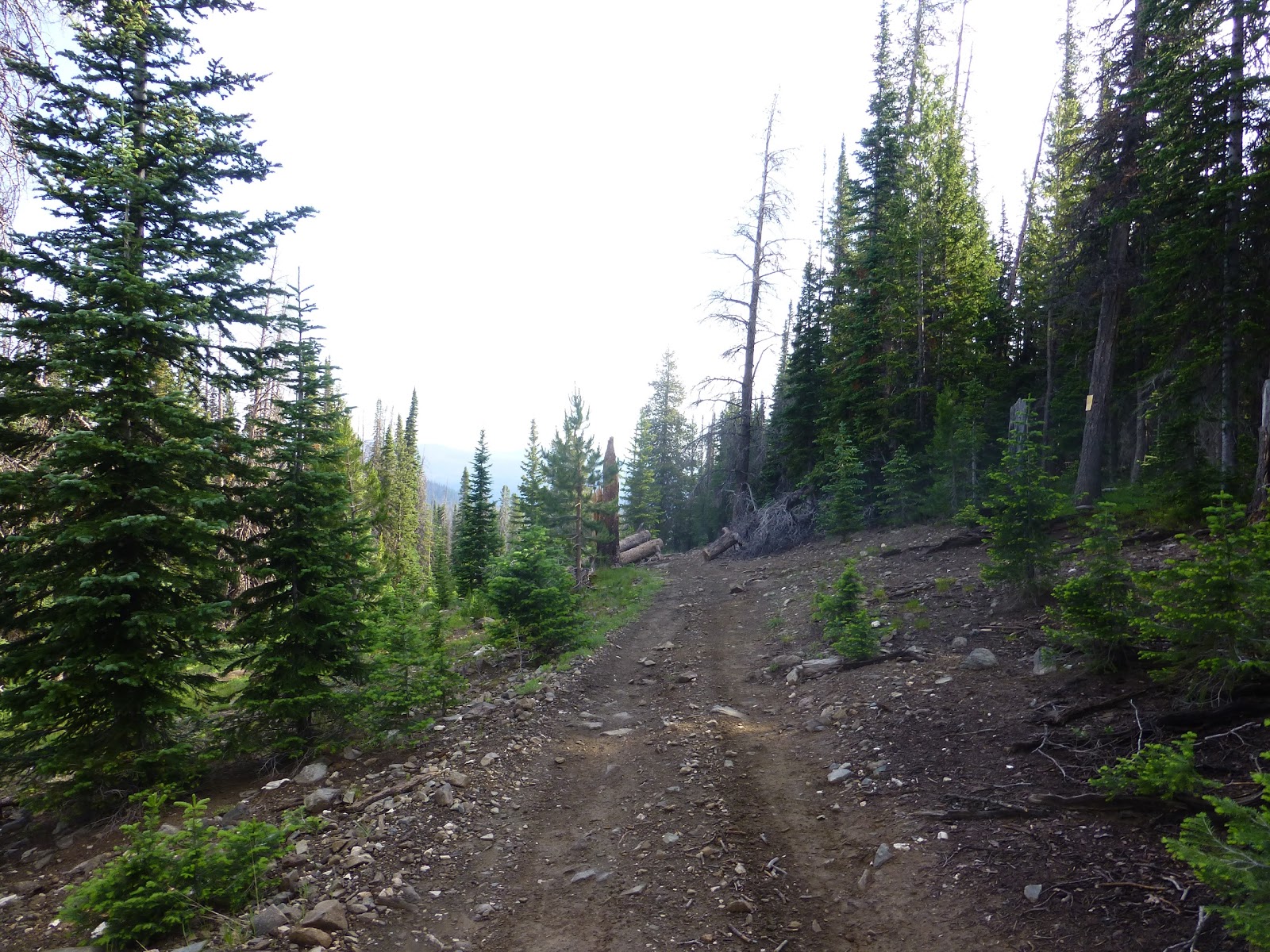 There was a cool field full of lupine (which I’m a big fan of) and I think that’s indian paintbrush with it. 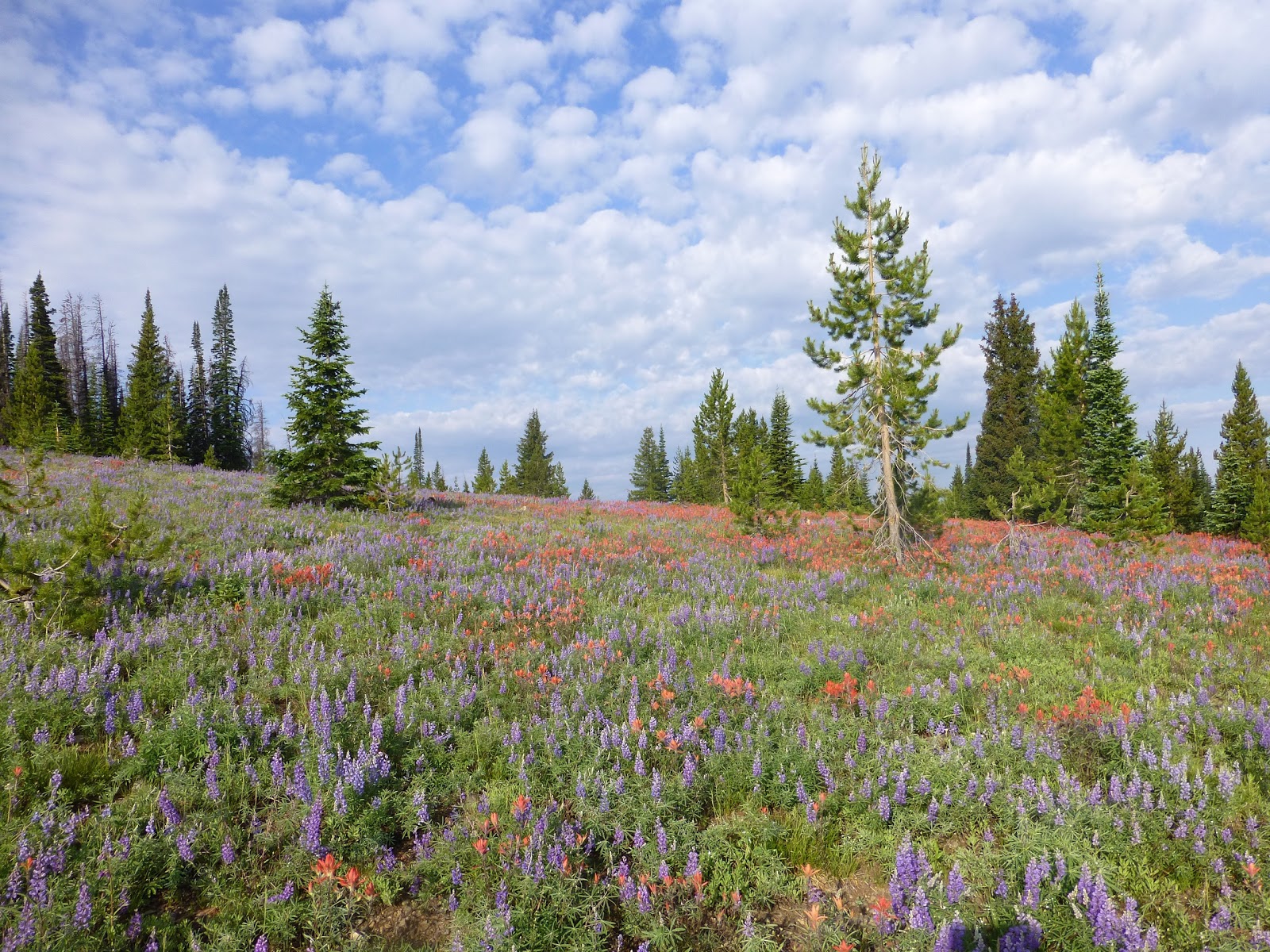 I was bummed that my camera wasn’t cooperating and wouldn’t do a times photo so I wouldn’t be able to do a StickPic like I’d normally do by myself. Then I got super lucky and 1/2mi before the border, a man was running on the trail training for his first marathon. He kindly agreed to go the extra 1/2mi out of his way to take my picture for me. So awesome! Here is the CO/WY border with my photographer Dan(I think that was his name). Thanks!!! 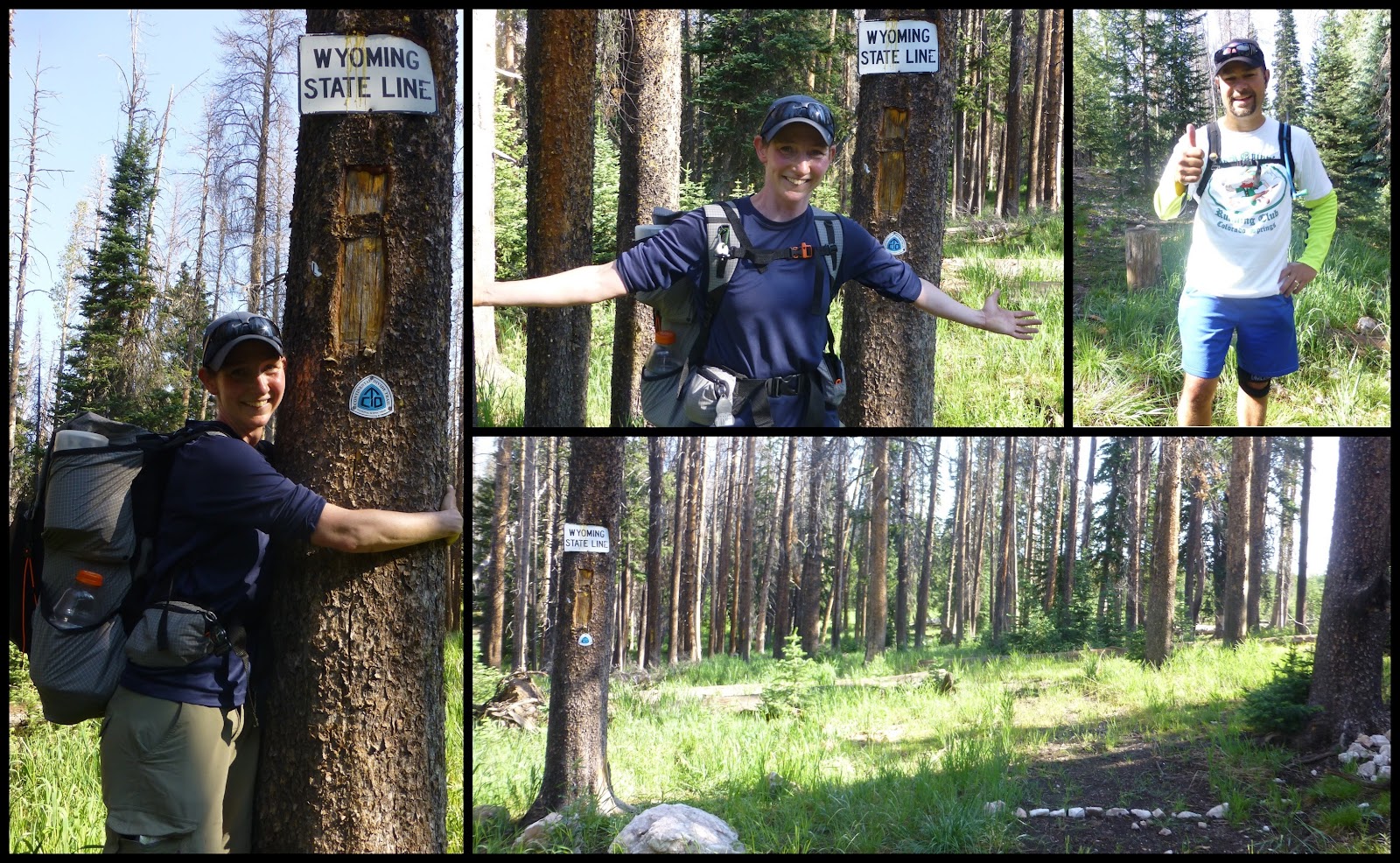 I mentioned that yesterday was a tense day for me. I think it was just adjusting to being on my own and the anxiety of all the turns the trail took yesterday with hardly any signage. As soon as I entered Wyoming, CDT blazes were everywhere and that really seemed to put me at ease again. I got my mojo back and felt so much confidence today! I can’t even tell you how many times I listened to the song Breakaway by Kelly Clarkson, but go look it up on YouTube now and imagine hiking across fields with no trail and blue sky with billowing clouds and try not to get pumped!
The second half of the day was cross country with cairns and I actually enjoyed it! It slowed me down a bit because there isn’t a trail and you just have to scan the horizon for a small pile of rocks or a stick standing tall with a rock on top of it. It was pretty ridiculous how randomly they were placed at times. Sometimes it would be 50yds away and behind a bush only visible if I walked around from another angle. Other times, just a tiny rock on a boulder that you’d only spot after guessing to go that direction after trying a couple other directions. My personal favorite was how often the next cairn was randomly 90 degrees to the right or left of the previous one. For some reason, I enjoyed the adventure of figuring it out and had fun with it deeming it the cairn scavenger hunt. I took a video I’ll post in a couple weeks. 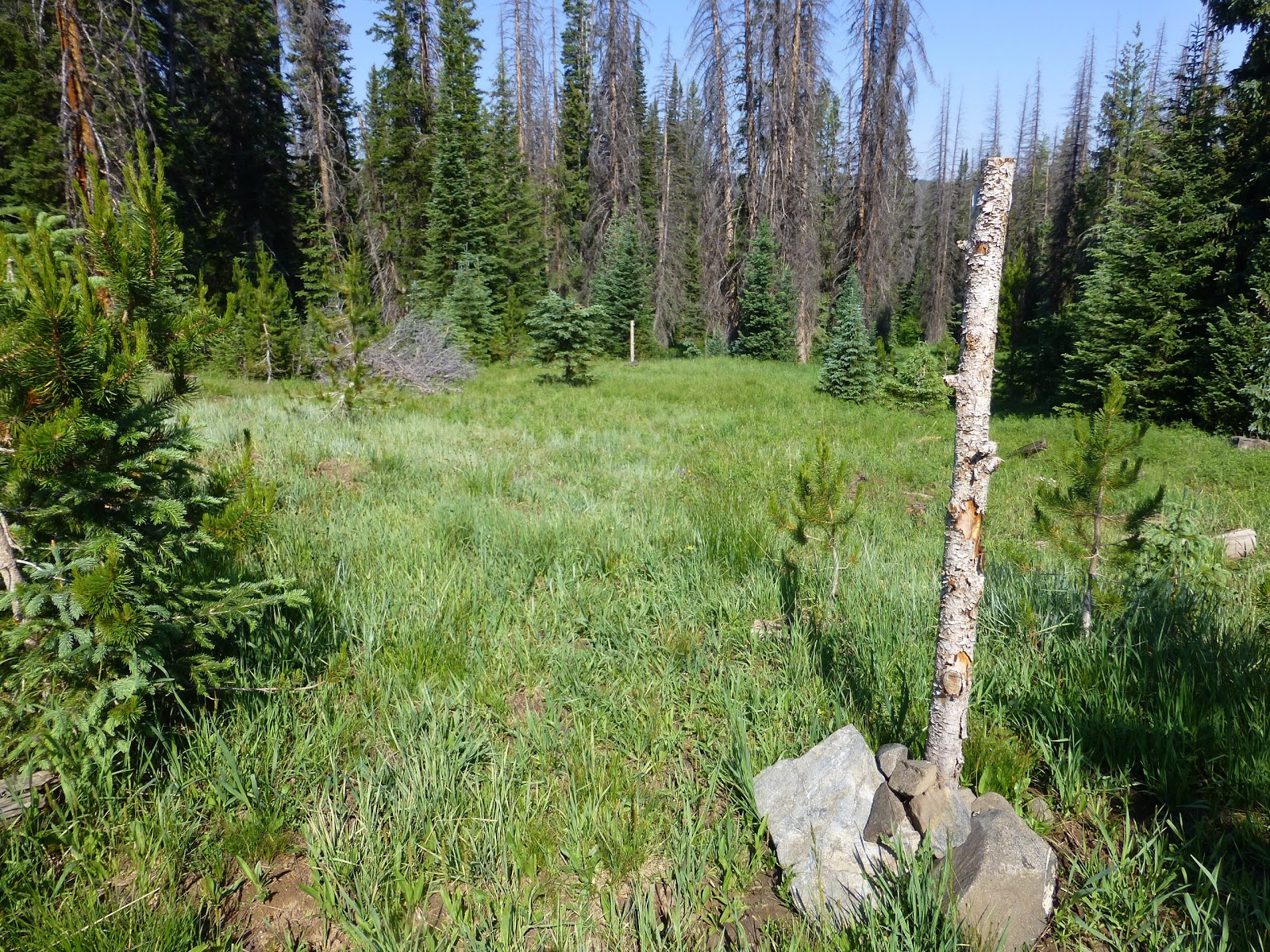 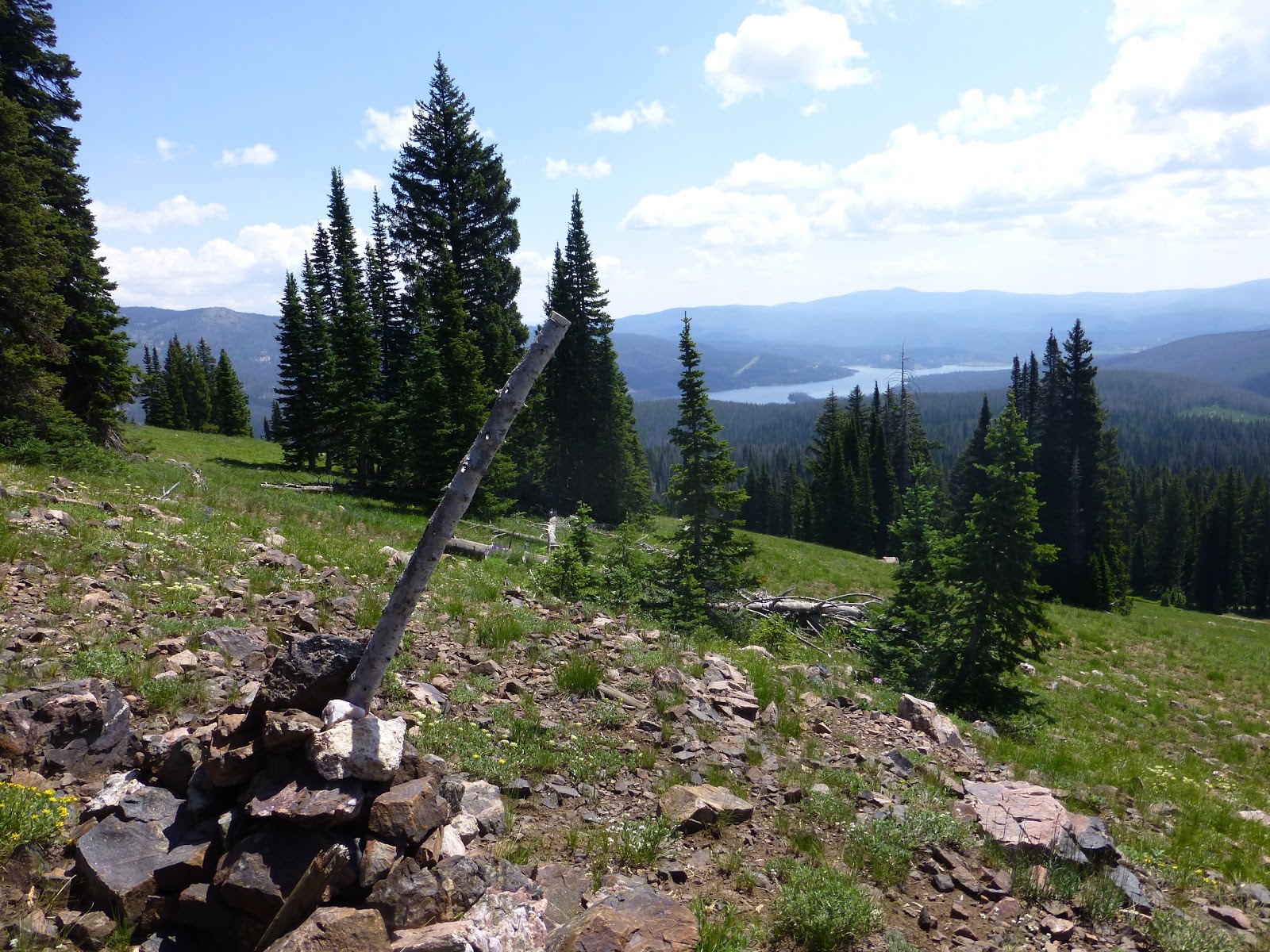 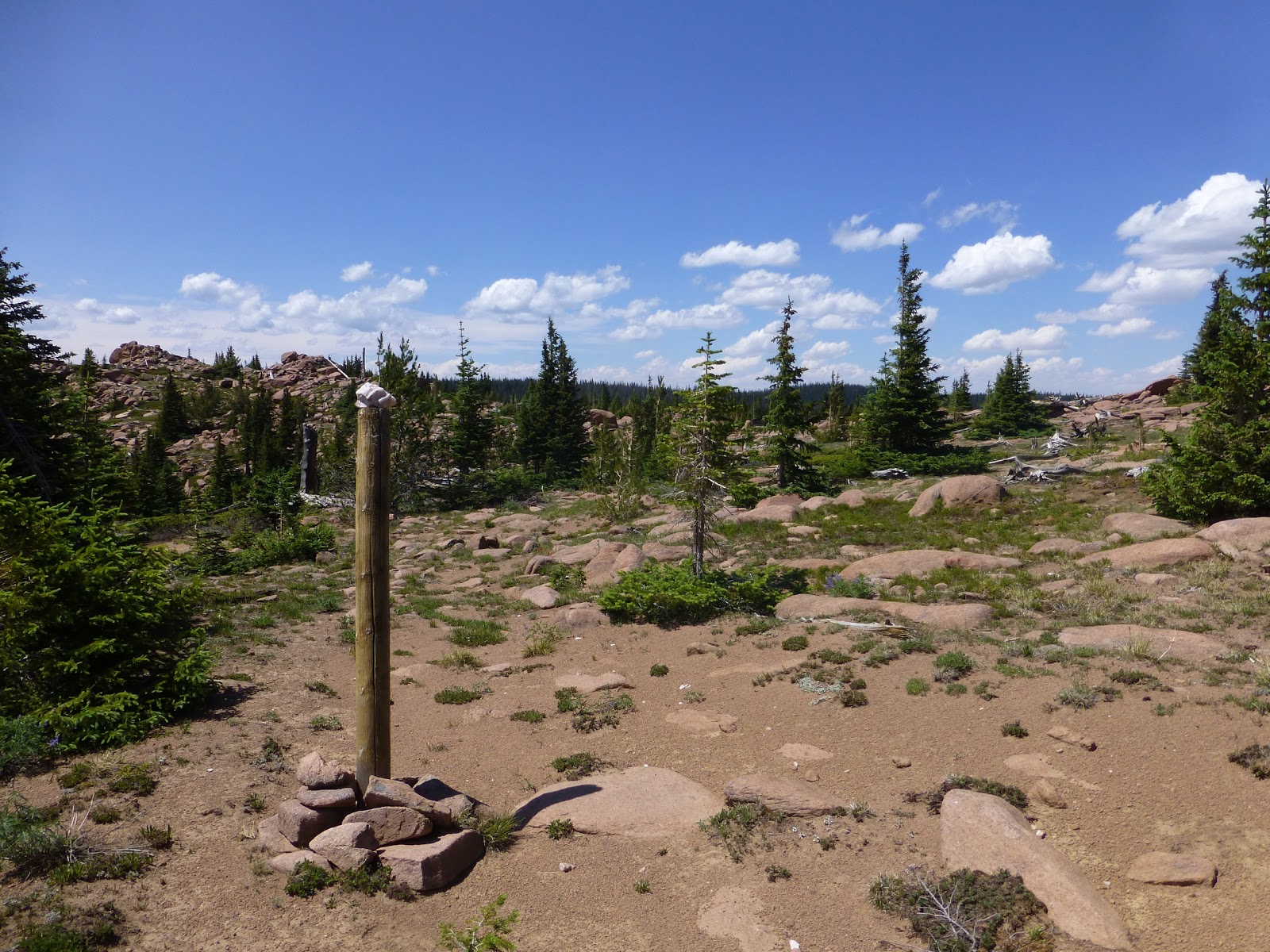 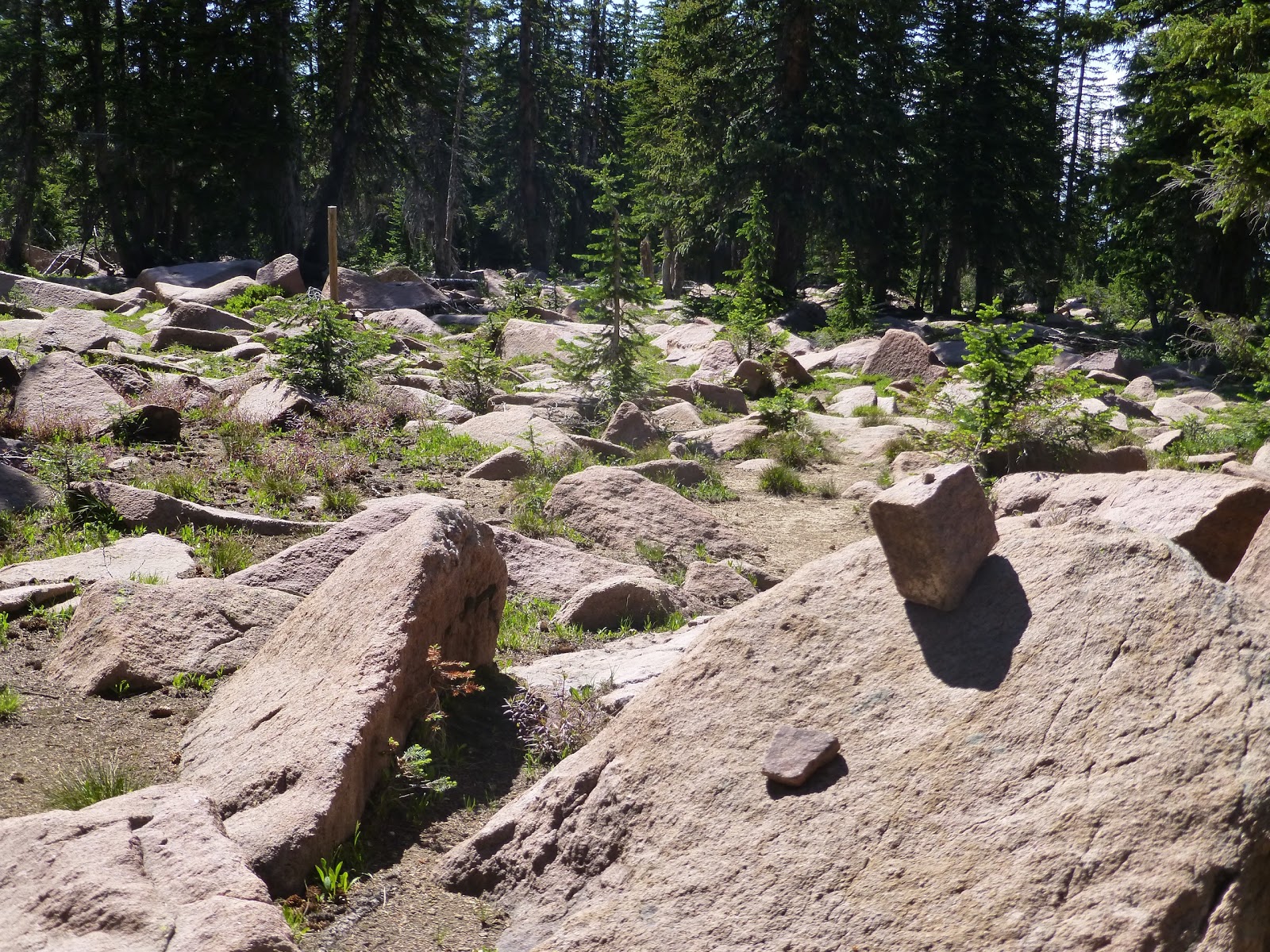 I also need to mention that for the third day in a row, my shoes and subsequently my feet were soaked much of the day. Not the kind of fresh water soaked of walking through a stream. It was the caked on mud kind of soaked from walking through tall marshy grass that rubs roughly in your shoes and smells horrible like hot dried up mud in a pigpen. I hope this pattern doesn’t continue! I purposely walked through streams when I could just to flush out the caked on mud. Blech!
I also had the most wonderful lunch by a stream without mosquitoes. It was just peaceful and perfect and really set the tone for the rest of the day. Other than Dan the runner, only ran into one other person on trail today. The second guy turned out to be on the wrong trail once I asked him where he was headed. I noticed he wasn’t headed to a road as I had only seen one in the morning and he realized he had missed his turn by almost a mile. He had no idea and I was able to get him back to the right trail. 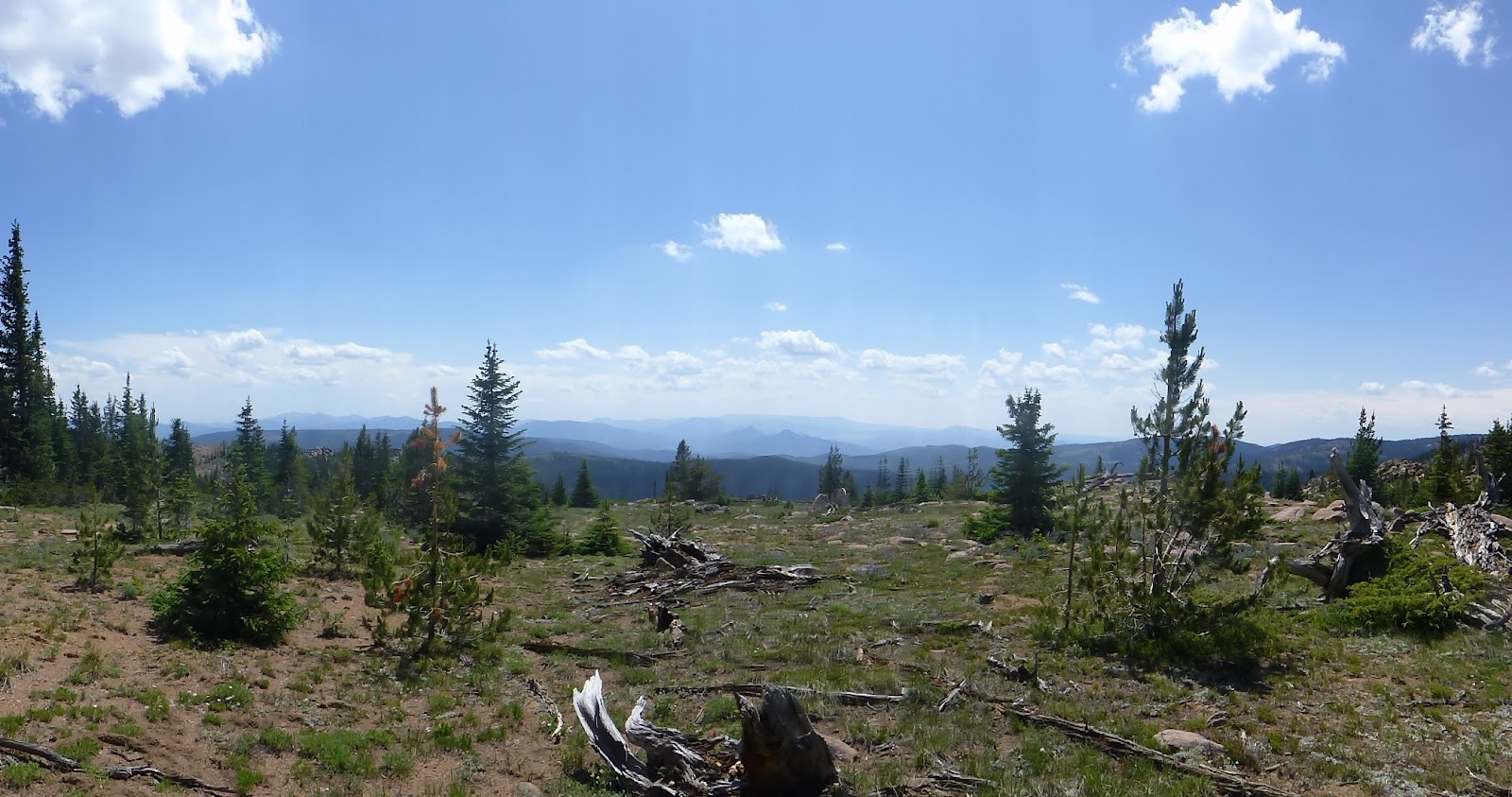 At the end of the day, I made it to the road(pass) at 6pm. I was willing to accept it if I couldn’t get a ride to town as it was not a busy road, but I really wanted to make it. Just 15mins into trying and after having 3 other cars pass, someone pulled over. His name was Buzz and I really lucked out! He was in a truck with a trailer hitched behind with equipment. Turns out he is camped at the pass near the trail and is working out there shuttling logged trees down to town to the mill. He was making a run down to town and is going to be back early in the morning tomorrow. I get to ride in the big semi in the morning and will have a picture of Buzz then. I really lucked out because Encampment and Riverside are really small towns about 18mi from the trail and that isn’t an easy hitch either way. Plus, I lost no trail time! I still got 28mi in today and tomorrow I will be on trail by 7:30am. Yay! I got to town tonight in time to get my resupply box, post blogs on the wifi, email a bit, and shower. I am currently sitting in a comfy chair in a fenced in porch. Quite a great day!