July 8th
Battle Pass WY 70(Encampment/Riverside)(1386.4)-N Fork Savery Creek(1413)
Campsite Elevation: 7,630ft
26.6mi
Well, the day did not start out as planned today. The plan was that Buzz, the logger who gave me a ride into town last night, was going to pick me up this morning at 7am after he dropped off a load of logs at the nearby mill. Well, 7am came and went with no sign of Buzz. I took the opportunity to do some emailing and watch some of an episode of Modern Family while I waited. At 7:45am, I walked on down to the intersection with the main highway and started hitching. It was pretty dead in this remote area on a Monday morning. About 30mins into my attempt to hitch, one of the camp hosts drove up to the intersection headed the opposite direction. He saw I was still there and offered me a ride. That was 18mi each way for him in a direction he wasn’t headed. That was so generous of him! His name is Bruce and he was my surprise trail angel today! THANKS to Bruce! 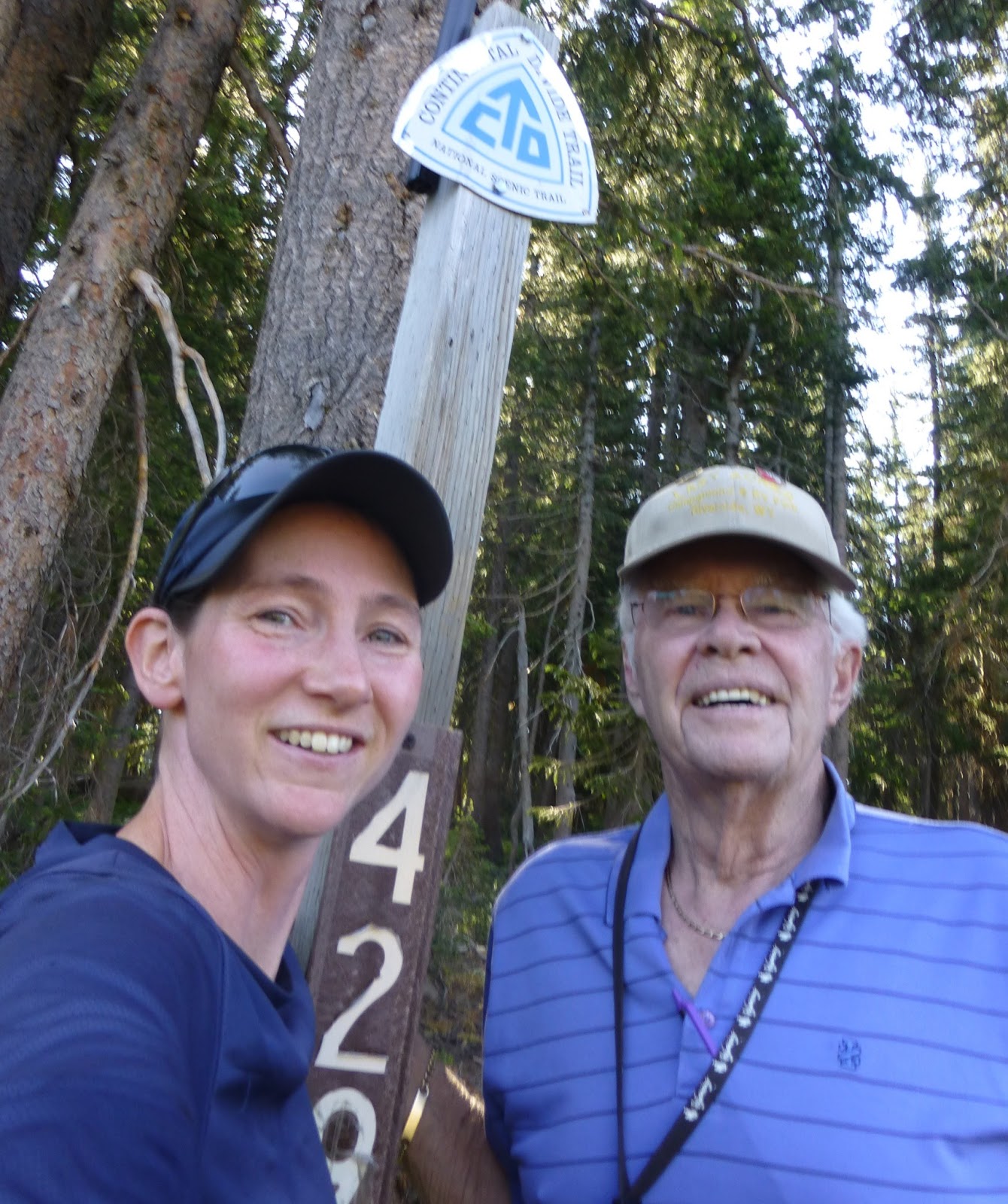 I started hiking at 8:45am, which is much later than usual, but with how difficult it is to get to Encampment and back to the trail on that resupply, I made amazing time. It’s a difficult hitch and about half the hikers opt to just carry 7-8 days of food to avoid having to get off trail there.
The hiking today was much more varied than I thought it would be. The first couple hours were spent on forest roads. 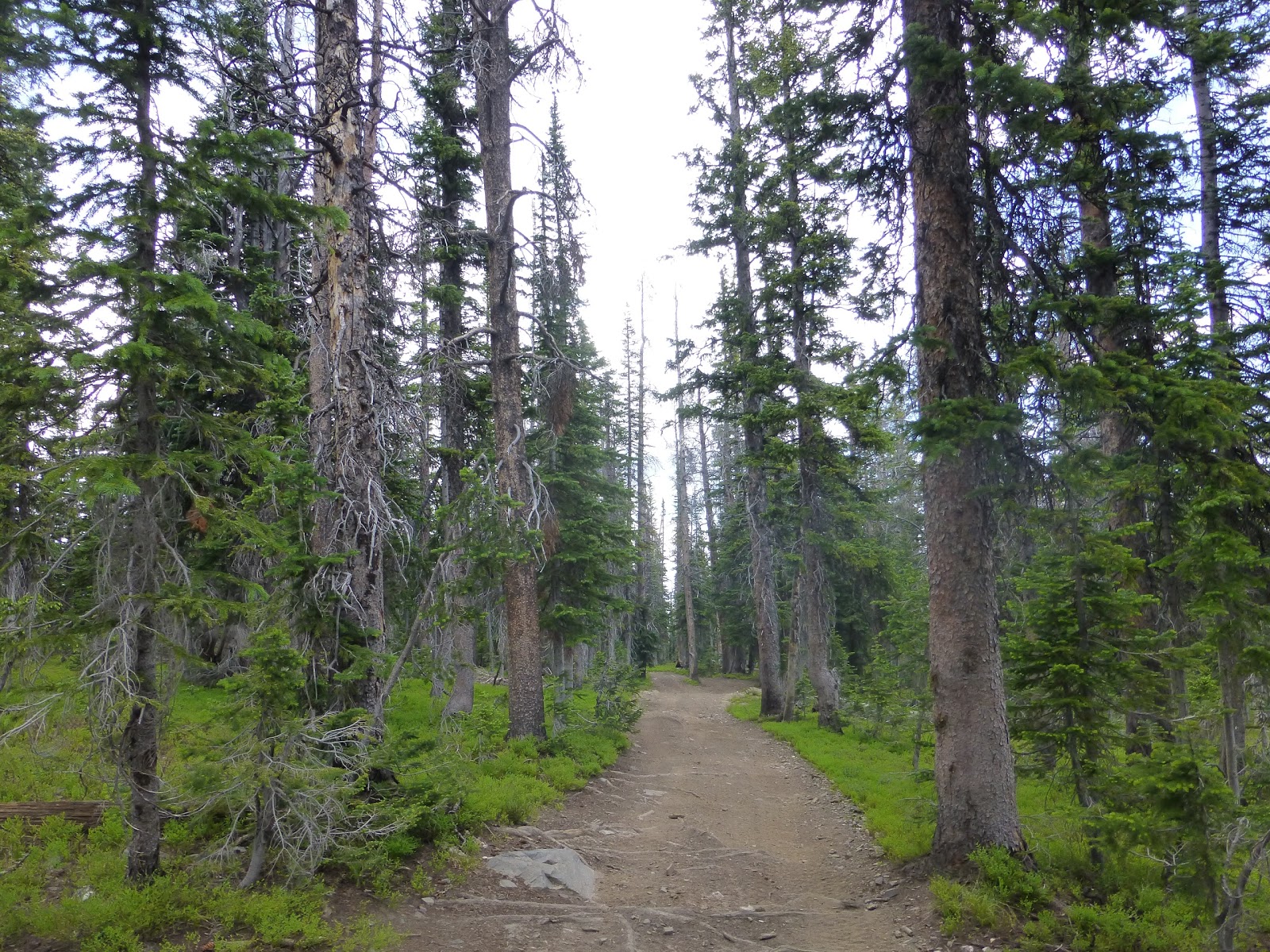 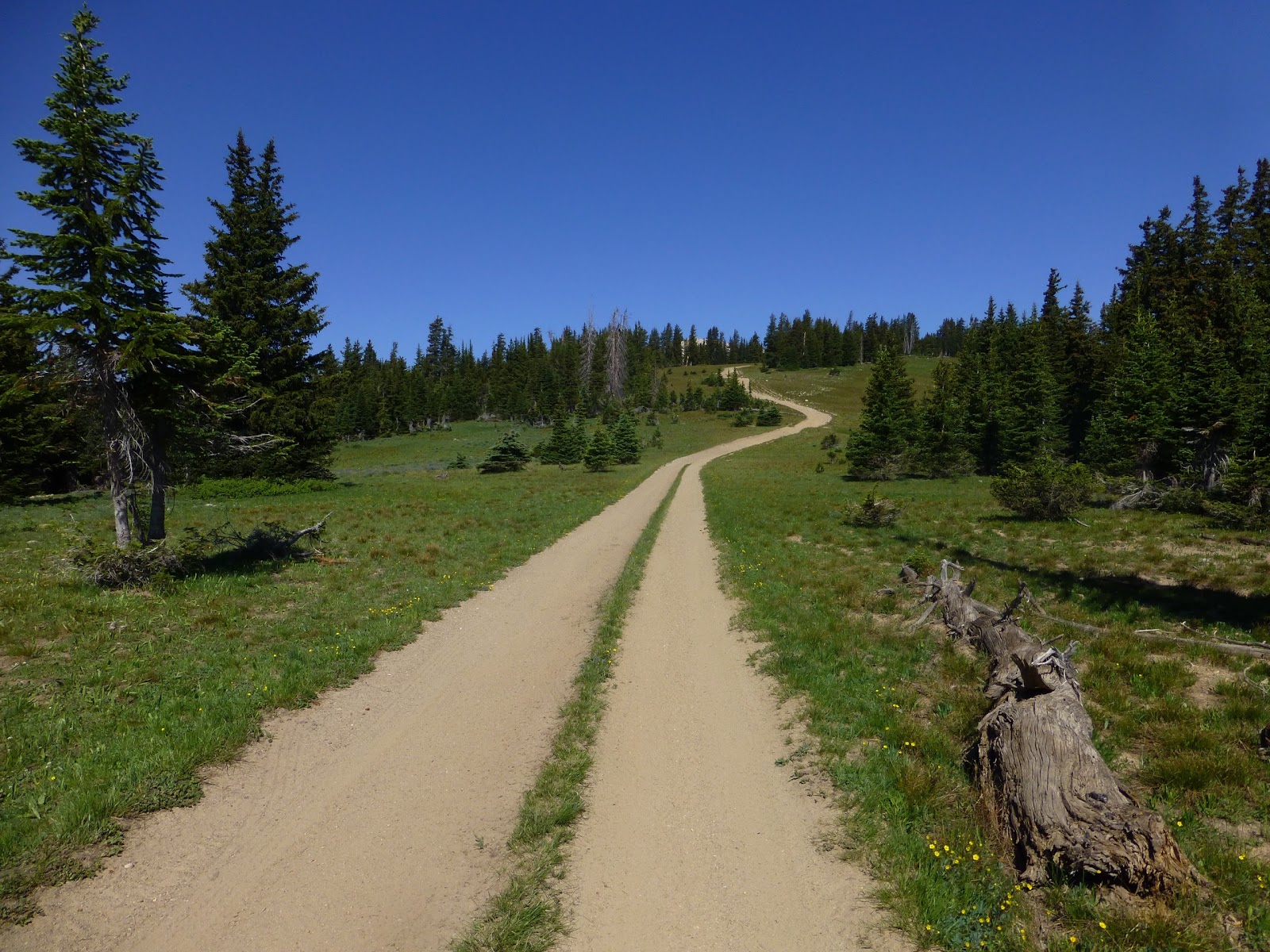 There was some uphill of 1,000ft that got me to almost 11,000ft. Then the majority of the day after that was a gradual downhill on various terrain that eventually dropped about 3,500ft. There was a pattern of dropping into rough forested areas with a lot of fallen trees… 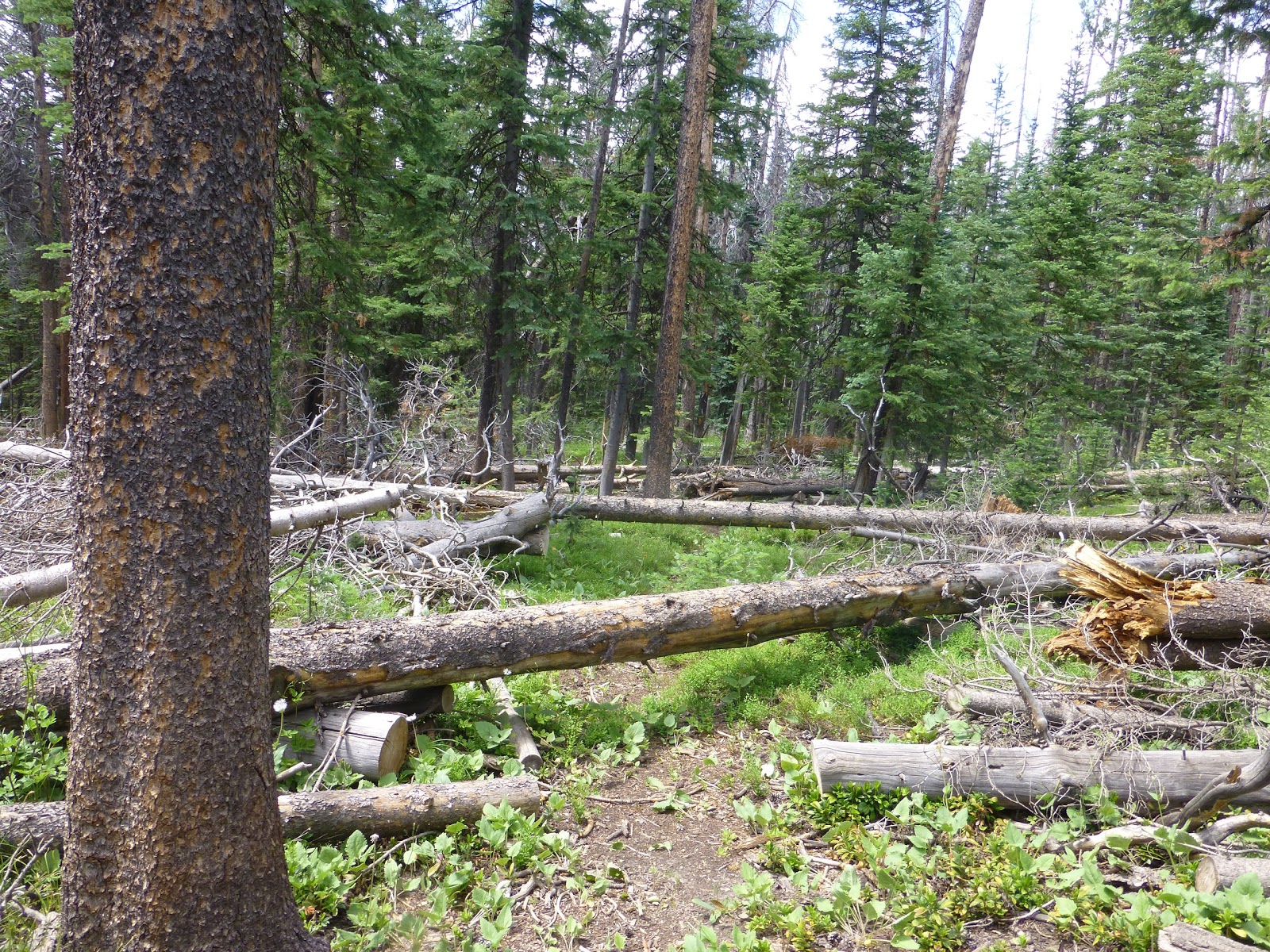 … and then popping back up for exposed stretches going cross-country and cairn to cairn. 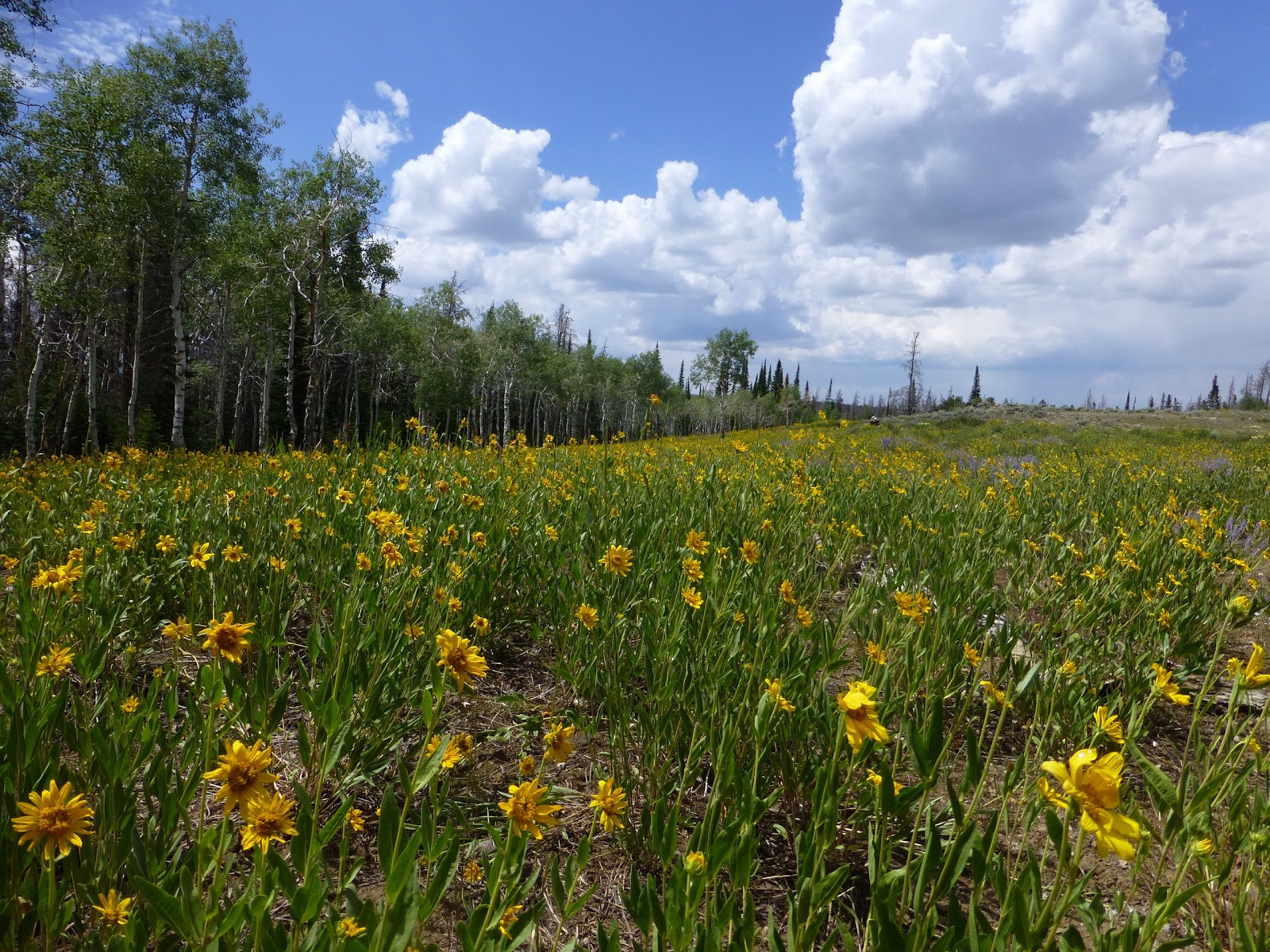 In the morning, I listened to the audiobook, Gone Girl, which I started yesterday. With my Suntactics sCharger, I’ve found I have unlimited battery on my MP3 player, so I’ve been listening to it a lot more when the trail gets monotonous on the road walks. I’m super pumped about that. Most of the day kept me occupied with the route finding, so I only listened to my MP3 player in the morning. At the end of the day today, I got a stretch on a smooth gravel road and got enough service on my phone to finish my episode of Modern Family from this morning. Yay! It also was overcast or cloudy a lot today which made for nice hiking, but there was the threat of rain and worry each time I’d pop up out of the forest. I did get rained on for 10mins and it passed quickly. It looked like I just missed the major rain pictured just ahead of me in this picture.

The last couple hours of the day became the road walking I had expected. Sometimes the “road” is more of an overgrown trail with faint markings of an old road and sometimes it is a full on gravel road. I ended today at the water source I’d been needing for hours. It was 6:30pm and I’ve been hiking til at least 7pm lately, but this was too good of a spot to pass on. There is a 12mi water gap from here, so it’s a good spot to stop to have cooking water and camp water without having to carry a ton. Plus, haven’t gotten a good night’s rest in awhile. It rained some last night so that was three nights in a row with either rain or a thunderstorm. It’s pretty exposed out on these roads and here was a sheltered area with large bushes, as it was windy and clouds had gathered when I arrived. Of course, now it’s calm and clear skies, but I’d rather be safe than sorry. I hear wolves or coyotes and am in bushes on the left. They sound more like dogs whining and in hope they stop!

My body hasn’t been this low in elevation on trail in forever! It’s actually sore from using muscles for hiking downhill and I took Ibuprofen tonight as a preventative measure which I hardly ever do. My hips, knee, and shin are sore. Quite the change! I even have the makings of a blister on the bottom of my foot and my feet are showing signs of rashing again like they did in the desert. This happened on the PCT in N California. It’s like my body is having to adjust to the dry desert habitat all over again. Speaking of dry, I had three water sources in a row be dry or a mud puddle today! Luckily, I carry extra water and it was easy hiking in mild temps today. I got worried at the end of the day and contemplated hiking off trail to a definite source. Then a car drove by! I asked if they had water and they gave me a liter. Aftern they drove off, I realized they were the only people I saw all day. The next source, a couple miles away, ended up being good, so I would have had water anyway, but that was really lucky that someone drove by and had water. I just can’t believe other hikers haven’t relayed this info to the rest of the hikers. I plan to as soon as I get service again.
I’m shocked I got in 26mi today after starting 2hrs later than usual. I hope the next two days are good for cruising. If I average 28mi/day I can make it into Rawlins the second night and be back on trail the third day. If I slow down and do 25s, I could get into town in the early morning the third day and have a nice long nero and then hike out the fourth day. This is what runs through my mind and I guess I’ll just see how tomorrow goes. It would be nice to save a day, but it would also be nice to rest up before the next leg in the Great Divide Basin, which is basically a desert with a ton of ticks…we’ll see…