Day 84: Transition Into The Winds

July 15th
Rocks Rd/Atlantic City(1582.5)-Creek 1mi After Entering BridgerWilderness(1614)
Campsite Elevation: 9,014ft
31.5mi
This entry will be shorter because it is already 9:45pm and I am already struggling to stay awake. I’ll explain the late night soon, but I’ll start with our 6am leave time this morning. We had spent the night at the tiny community center in Atlantic City. The husband of the waitress we had at the Grubstake yesterday offered to give me and Rampage a ride the short distance back to the trail and then take bloodbath 5mi further up trail to South Pass City where he picked up their resupply bid yesterday. We told him 6am thinking he’d probably run late like most rides I’ve gotten on trail…and he came 5mins early! We hurried to get ready and were hiking by 6:15am. Bloodbath waited for us to do the 5mi to S Pass City and the three of us hiked together the rest of the day to kick off what could be a 7 day leg…we hope to make it 6 days if we can. Today was the transition out of the desert of the Great Divide Basin and into the mountainous Wind River Range(aka the Winds). We are camped just before the fun stuff, so today was a few hours of dirt road walking that soon went cross country on and off and eventually changed to dry and very dusty trail. Plus, it was hot and we were thankful to be out of the basin! The trail would have some brush from time to time and went into small forested sections affected by beetle kill. The best part was that there were a lot more water sources, so we didn’t have to carry much water. 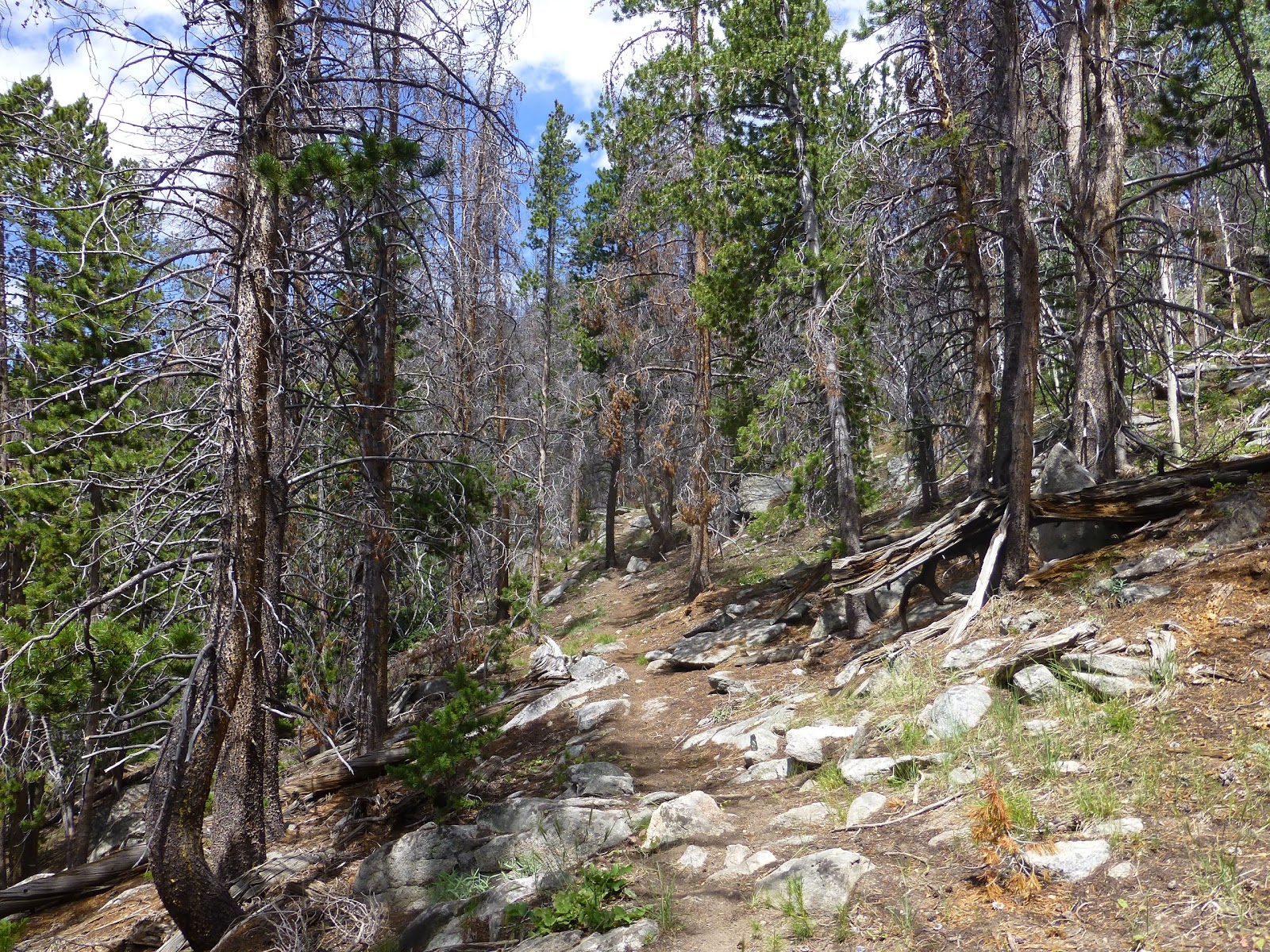 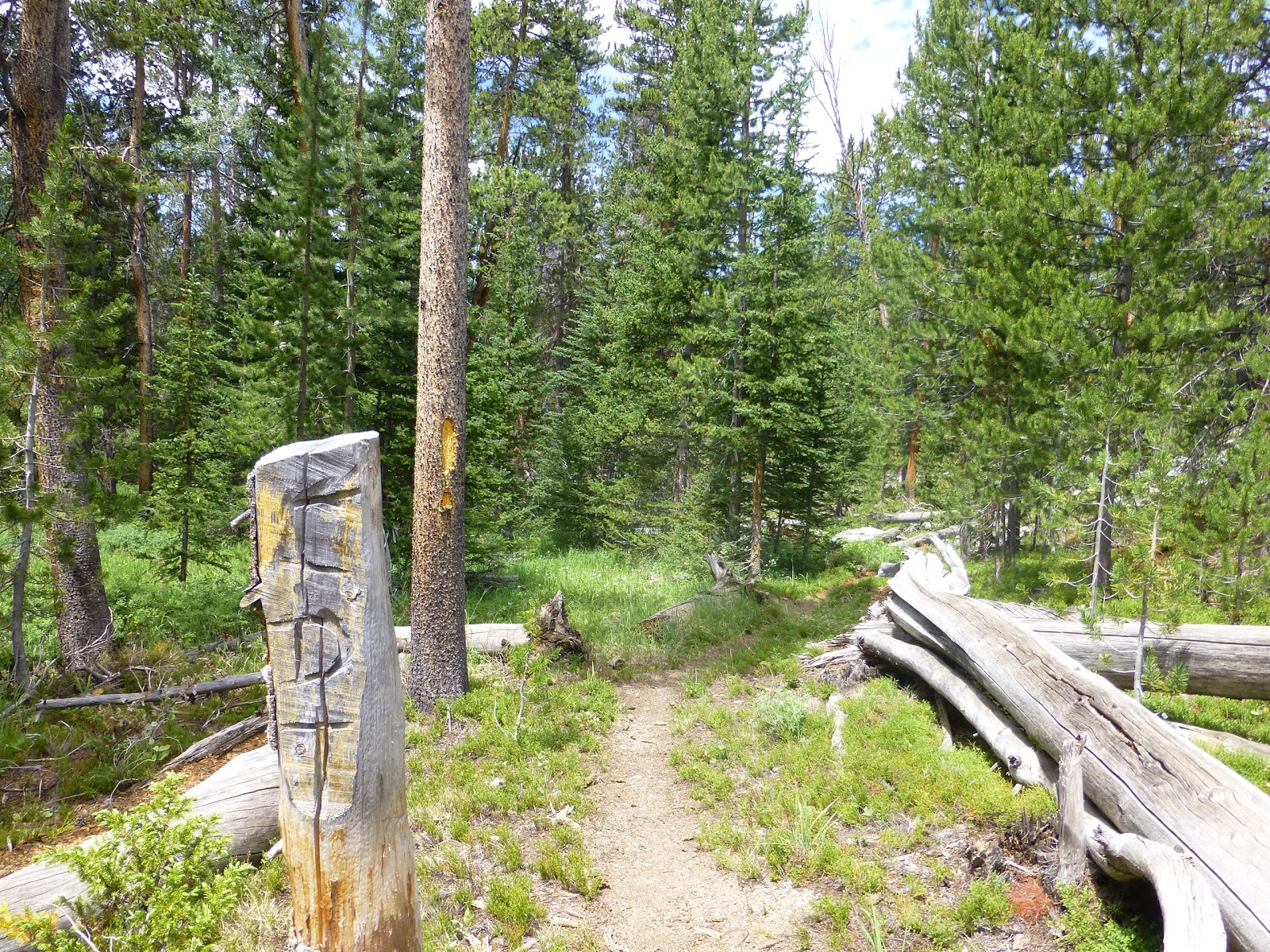 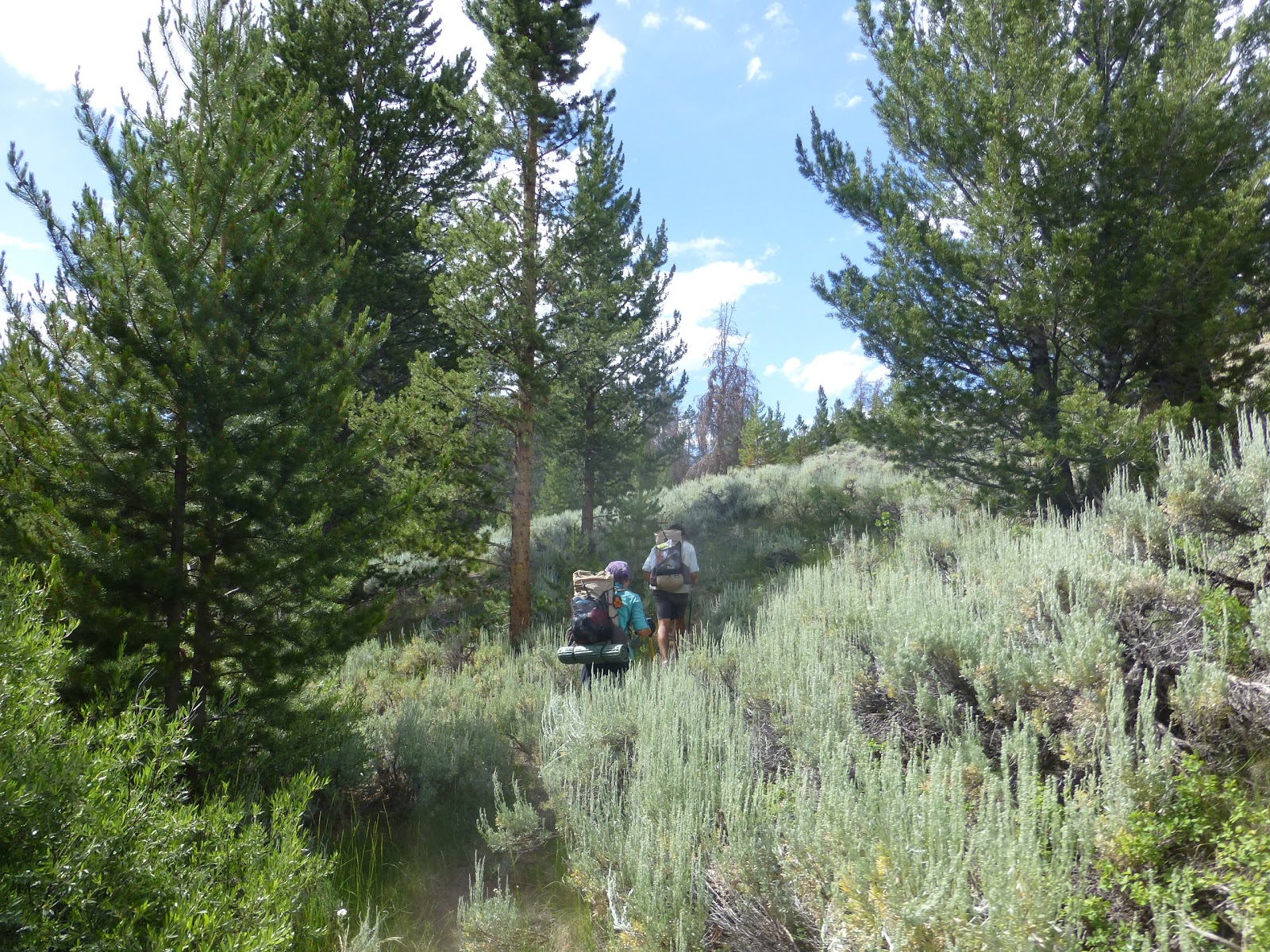 At the end of the day, our original campsite we hoped for ended up being beaver infested and the home of many loud cows…we moved on another half mile to a much better stream and camping area. By the time we got to camp, it was 7:30pm. A bit later than I prefer. There were many chores tonight that made this night annoying. I really don’t like chores! People think we just get to camp and relax and that is definitely not the case. After the regular routines of setting up camp and making dinner there were some extra annoying chores tonight. First off, we were all REALLY dirty today from the dusty trail. The three of us went down to the stream to wash off and it was COLD and unenjoyable, but really necessary. Here I am in my before bath photo. 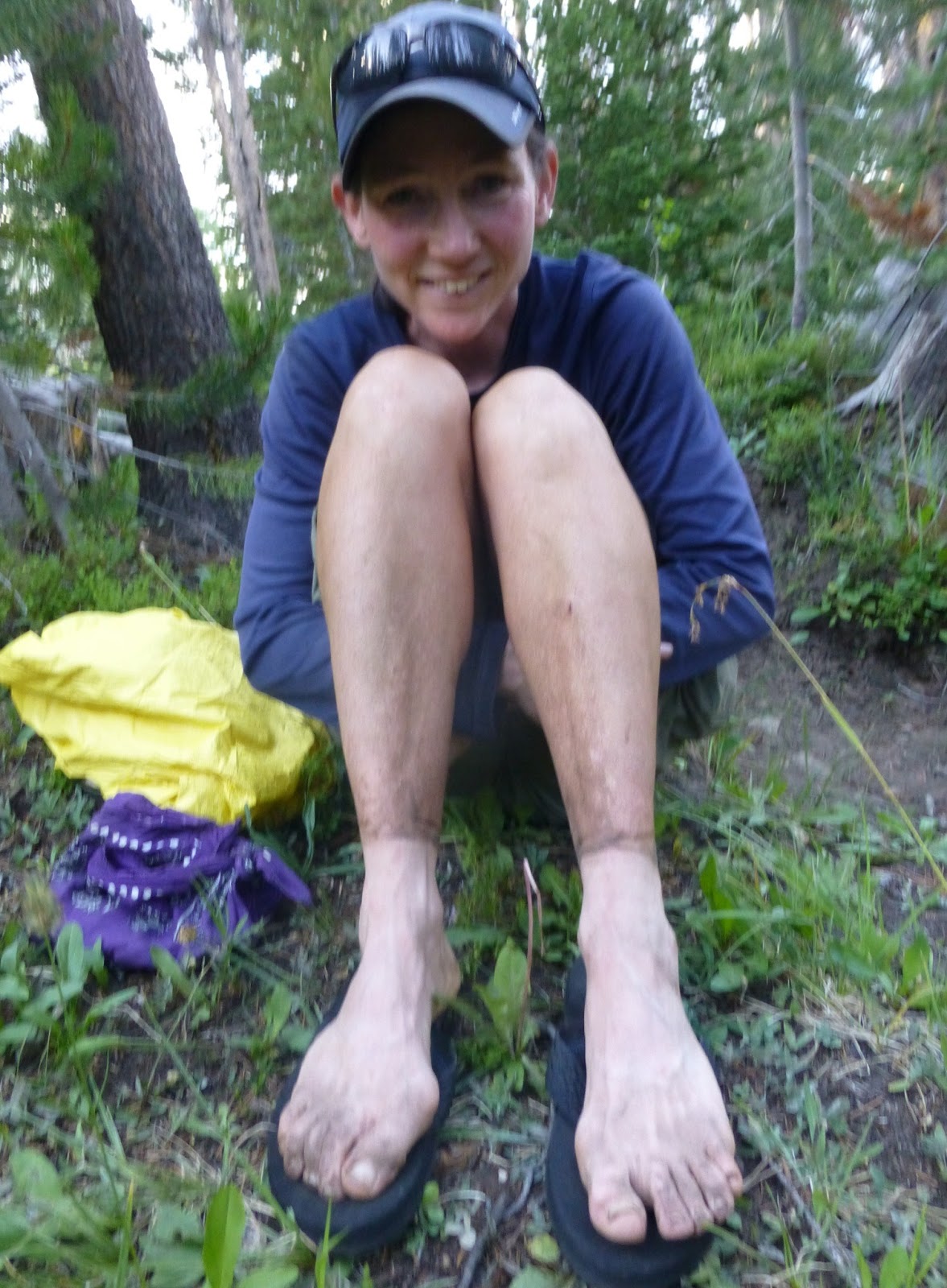 On our way to camp within a mile of where we are camping, we saw very large bear prints going the opposite direction on the trail. As a precaution, we had to hang all our 7 days of food and anything else that would entice a bear. I think the whole process added a good 20mins to my routine tonight. We are sure it must be a black bear and aren’t worried, but we don’t want to be stupid with how close the prints were and the fact that this area seems popular for camping. Finally, I had to fix my 2L Sawyer squeeze bladder. I had an Evernew bladder most of the hike and a couple weeks ago, it jut wore out on top where the opening is and was leaking…well, now the Sawyer bag, which is weak and I am only using because it was my backup, is doing the same thing, but worse. The bag is used with my Sawyer Squeeze filter and I Squeeze it to push the water through the filter. The problem today is that the bag was leaking dirty water when I squeezed it. I plan to get a new more durable Platypus bladder at the end of this leg, but tried to fix the other one with Tenacious Tape tonight….another chore! Of course last leg I ran out of bleach, so I can’t take the added precaution of treating the water. Bloodbath and Rampage treat or filter few sources and didn’t filter our campsite source. I was too tired to care and the bladder was leaking into my bottle anyway, so I didn’t treat it either. Hoping we made the right choice on that one! Last, I had to go back to the stream to clean out my dust filled socks so they can dry tomorrow and be ready to be worn the next day. Speaking of which, tomorrow we start the fun stuff in the Winds, yay! Good night!